Are you a crisp lover? Love a good snack down the pub? You’re not alone. Crisps and a pint is a tried and tested snacking occasion in the UK, and our favourite Burts Chips is encouraging Brits to think outside the crisp packet and enhance their snacking with the latest trend: savoury crisp cocktails. Here’s everything you need to know: 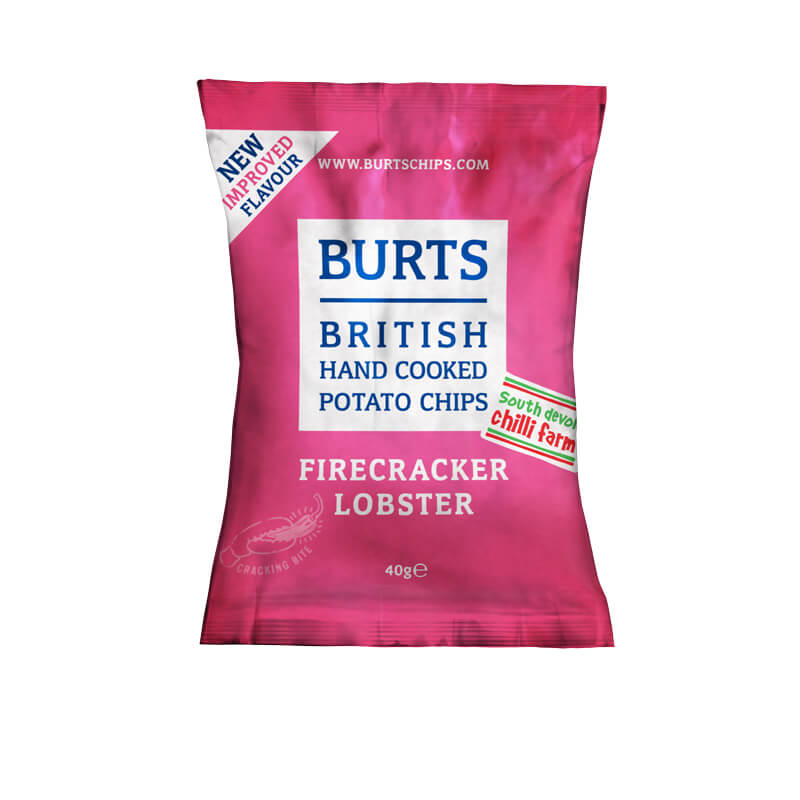 Burts Chips, the artisan hand-cooked crisp company, has created six ‘Burtender’ crisp cocktail recipes. Trust us, you’ll never look at a humble packet of crisps in the same way again. Experts in adventurous snacking, Burts Chips know that a good cocktail is the same as a good snack – it has to have the right balance of ingredients and textures to be satisfying. Burts teamed up with an expert mixologist who selectively combined great cocktail ingredients with Burts’ distinct hand-cooked crisp flavours to ensure each cocktail carries its signature big bold taste, and that there was a drink for all palates, preferences and spirits. 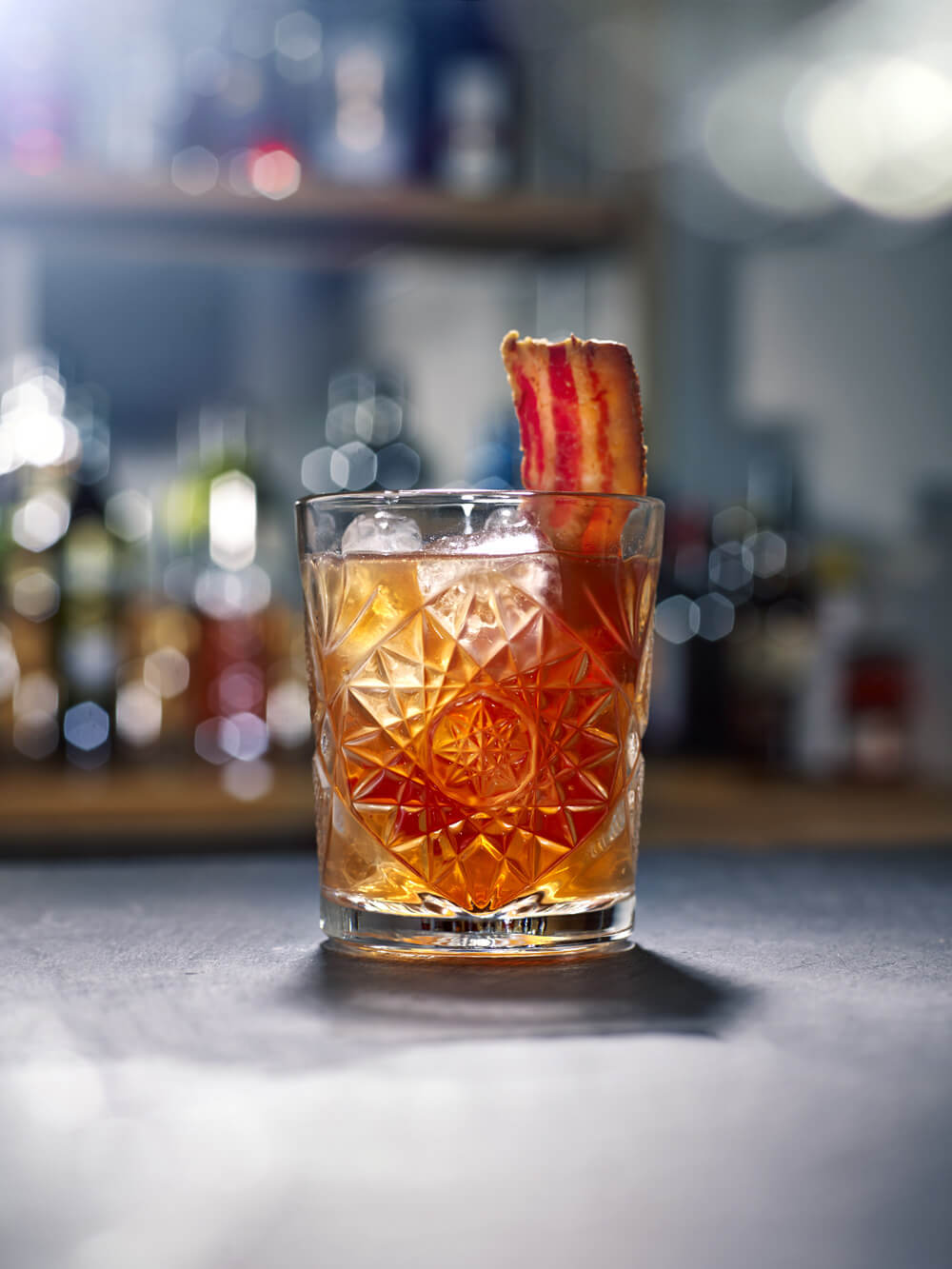 From the joining of two classics with Burts’ vintage cheddar & spring onion martini, to a margarita sprinkled with Burts’ Sea Salt & Crushed Peppercorns crisps atop a sea salt foam, and Burts’ smoked crispy bacon Manhattan, there is something to inspire everyone. For the first time, the crisps aren’t just the wingman to your favourite drink, our adventurous cocktails put crisps centre stage, where they belong! 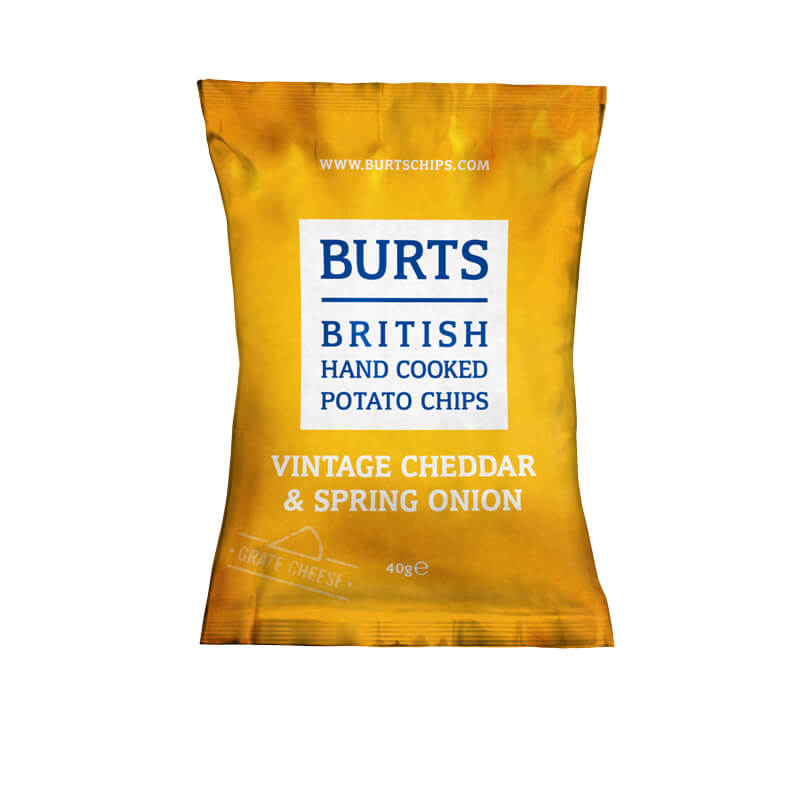 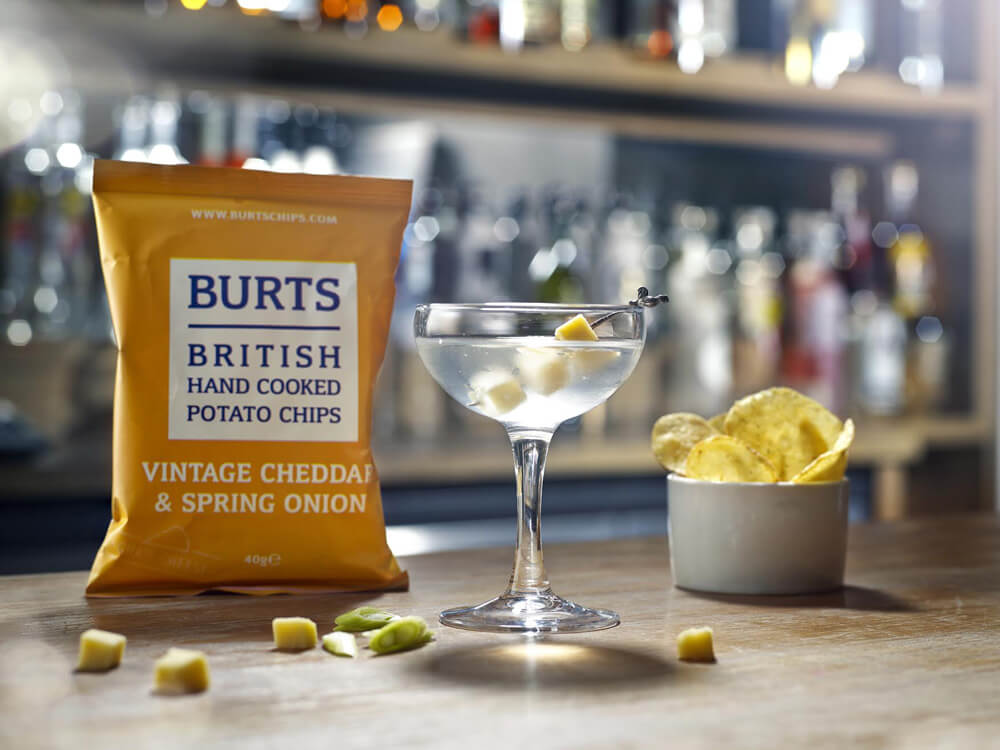 Shake and double strain into a chilled martini glass

Serve with cube of mature cheddar on a stick 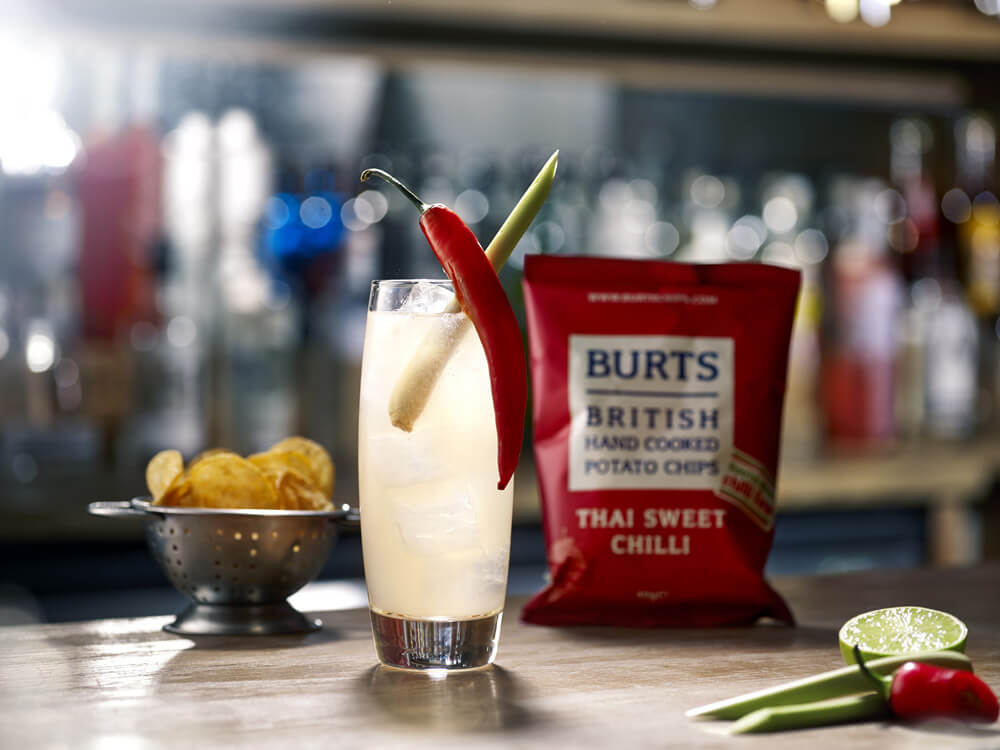 Cool and refreshing – with sweetness provided by the cordial – a touch of ginger heat followed rapidly by sweet chilli heat, especially on the back of the tongue. Ginger beer fizz completes drink, chilli lingers. 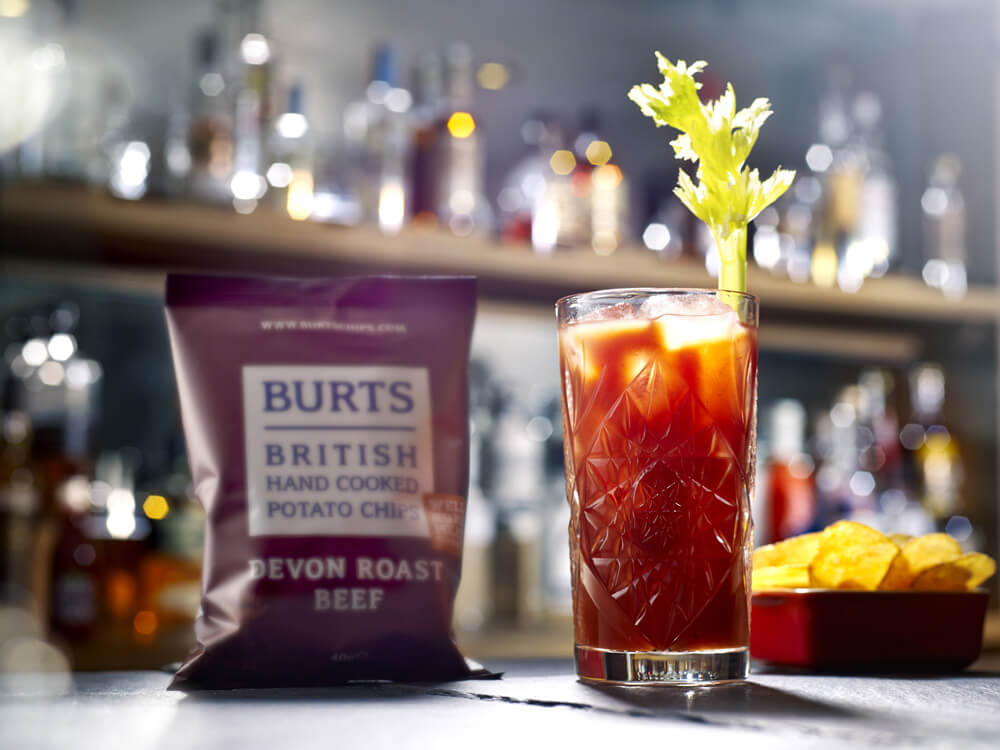 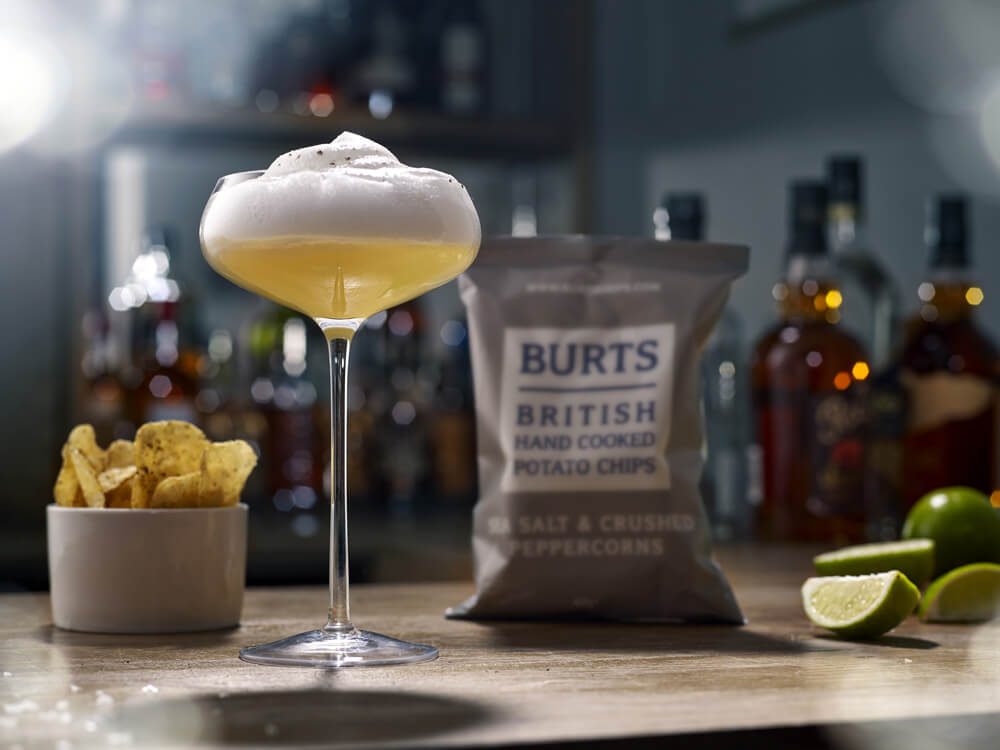 Tasting notes: Sweet and light salt foam, acidic and bitter, meets a sweet challenge from the agave nectar and strong tequila. The salt battles with the margarita, leaving a well-balanced finish. Moreish. 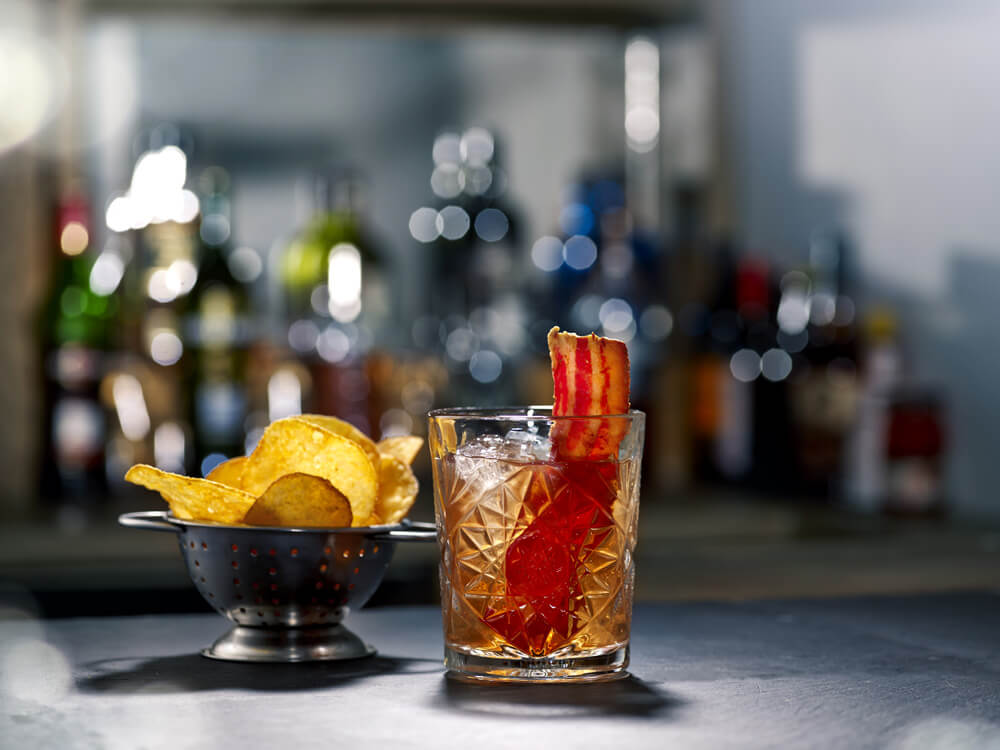 Tasting notes: Strong bacon aroma, mellowed with the sweetness of the vermouth and strong flavours of bourbon. Cherry sweetness comes through on the finish. 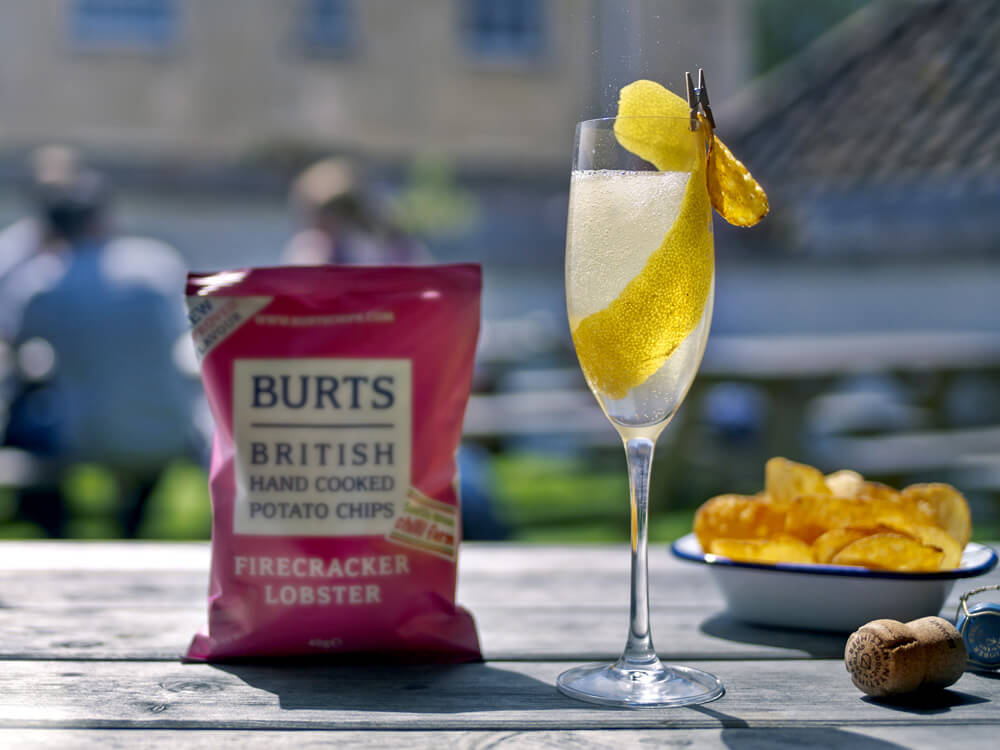 Garnish with a twist of lemon

Tasting notes: Initial aroma of lemon and freshness, taste begins with champagne, cooled down by the aromatic gin and finished with crisp lemon.