When chartering a yacht in Croatia, no two days are the same. Mornings might be spent discovering medieval cities and UNESCO World Heritage sites, while afternoons can be spent exploring tiny islands and crystalline waters. Vast pine forests, towering mountains and stunning terracotta-topped settlements characterize a spectacular landscape. While life moves at a charmingly slow pace in places like Lastovo (where tourists were banned for almost 50 years), destinations such as Hvar and Brač guarantee a lively encounter, with party scenes that rival those in Ibiza. The emerging popularity of Croatia as a yachting destination has seen an influx of discerning travellers descend upon the country’s many islands; as such, the nation’s luxury infrastructure is rapidly developing to accommodate demand. These factors, and a litany of additional qualities, make Croatia an enticing yacht charter destination for the summer of 2017. We’ve mapped out one possible itinerary to illustrate an Adriatic yacht charter in its best light.

Meet your vessel in Split – Croatia’s largest port; M/Y INDIAN EMPRESS and M/Y CAPRI are both excellent choices for a memorable yacht charter in Croatia. One of Croatia’s most popular destinations, Split is an historic settlement that boasts both charming beauty and captivating cultural attractions. The city’s centre is UNESCO-listed and offers a fascinating insight into a medieval city, with columned ruins and meandering alleyways. Diocletian’s Palace is among the most enthralling attractions and should not be missed. Dine at Dvor restaurant – a scenic spot that offers a view of the Adriatic Sea. Have a tender collect you from Firule beach once dinner is done. Unwind under a setting sun on the aft deck of your luxury superyacht to round off the day. 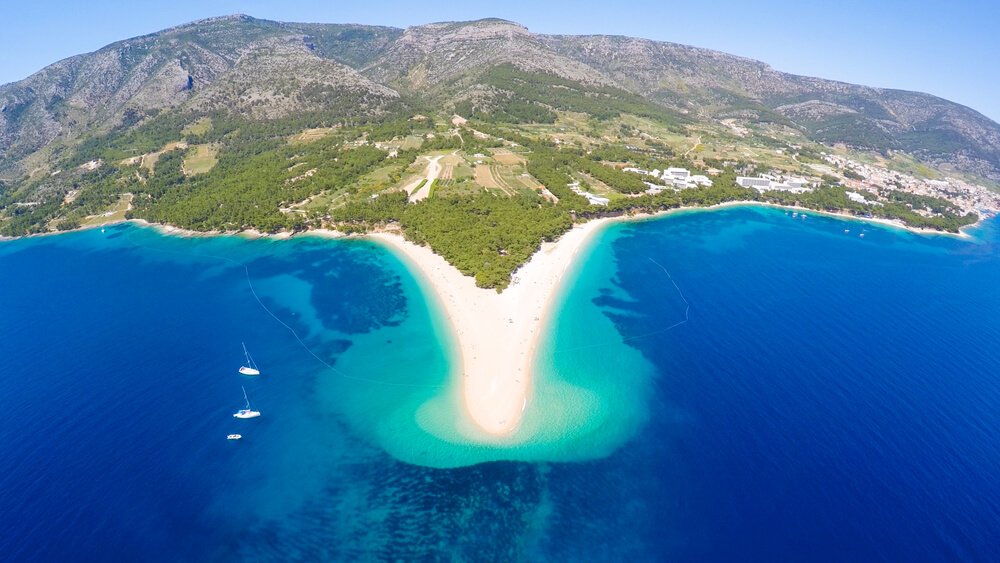 The coastline of Brač is scattered with scenic inlets and offers many bucolic spots in which to drop anchor. The waters that surround Zlatni Rat – an iconic spit of land on the south side of the island; also known as the Golden Cape – have proved to be a popular anchorage spot for luxury vessels. Here, the water is at its clearest and the marine life is ample, making it the ideal spot in which to snorkel or use the yacht’s water toys. Brač is celebrated for its white stone, which was used to construct the White House in Washington DC. Supetar and Bol, the two main settlements on the island, offer a relaxed afternoon for discerning visitors. Sample seafood at a quaint beachfront restaurant for an authentic taste of Croatia. After a good night of sleep in a sumptuous stateroom, spend day three unwinding onboard your charter yacht, enjoying fine food and dedicated service. 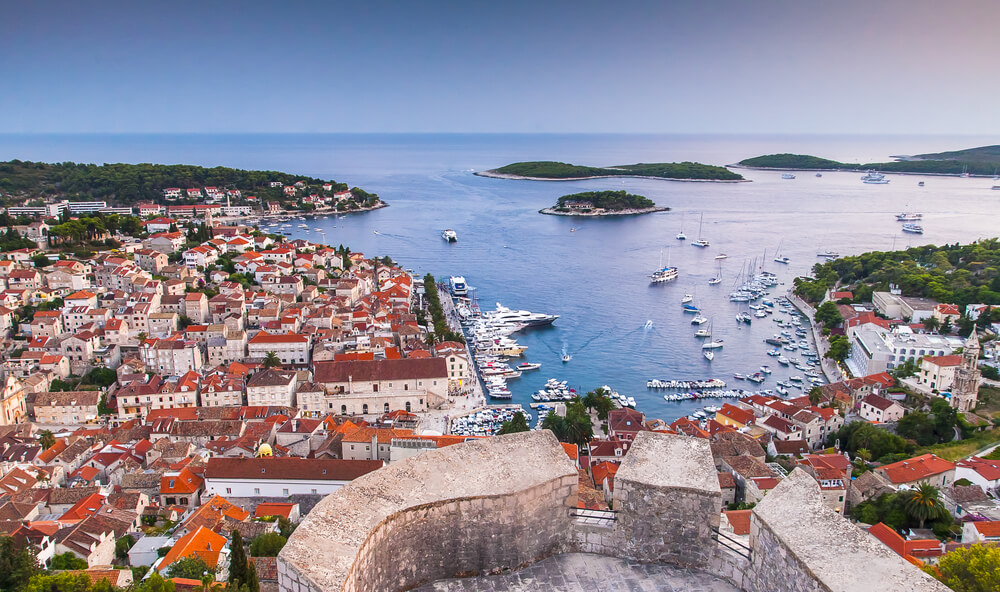 One of the Dalmatian Riviera’s most popular destinations, Hvar benefits from a rich history, spectacular architecture and a picturesque façade. The island enjoys an air of exclusivity and welcomes many luxury yachts in the summer months. While 20,000 tourists may flock to Hvar Town each day in the peak season, a luxury yacht charter ensures privacy and flexibility, enabling you to explore this unique hotspot at your own pace. The pedestrianized city centre is a history lesson in its own right, with gothic buildings, stone streets and pristine squares. Dubbed as the city that never sleeps, Hvar Town’s reputation as a party capital of Europe is not unfounded: cool beach clubs and chic nightclubs are alive with partygoers all night long. The landscape that surrounds the city is nothing short of breathtaking and warrants exploration, if just for a short hike.

Just a short cruise away, Vis matches Hvar in its appeal, yet the atmosphere is far more relaxed. Its former standing as a Yugoslav military base has preserved the island’s sense of authenticity – a past which is still evinced by a vast submarine pen and other subtler remnants like the hilltop canons that are visible on the approach into the harbour. As seafood constitutes a staple of the Croatian cuisine, have the yacht’s chef prepare the catch of the day; Vis’ glass-like waters are teeming with fish and the island is renowned for its culinary greatness. Make the hike up Mount hum to admire the panoramic view of the island and take a tender to the green cave, a grotto like rock formation of immense beauty. 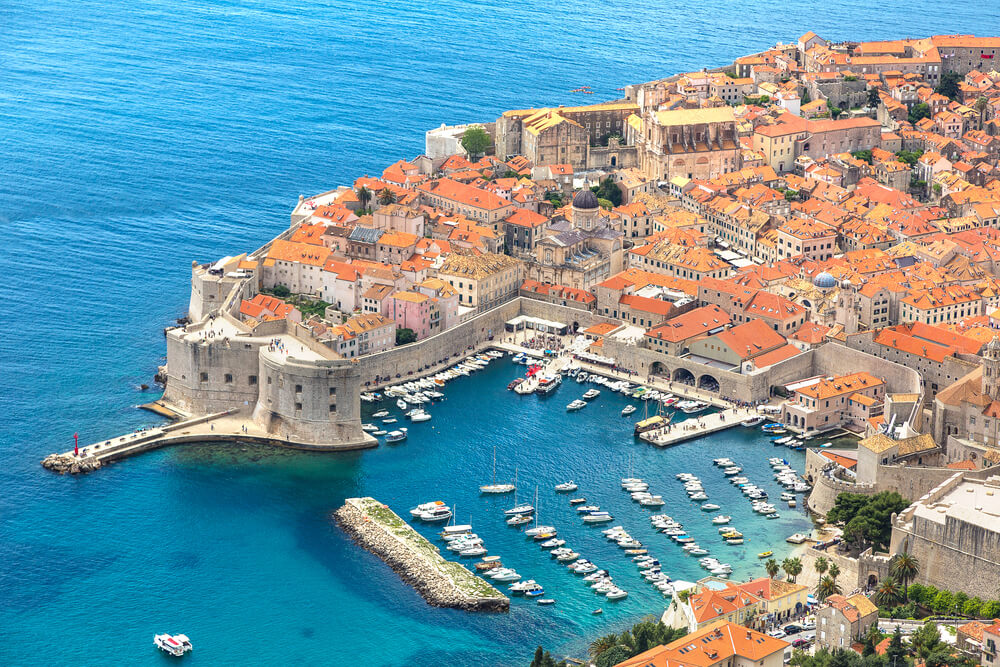 Dubbed the pearl of the Adriatic, Dubrovnik is beguiling and spectacular in equal measures. Famous for its orange-hued top and its glimmering, azure surroundings, the historic city brings a fascinating heritage into the modern age: marble-paved streets lead from intriguing museums to modern art galleries; the city’s 9th-century walls offer a scenic history lesson; and modern restaurants, like 360°, are scattered amongst ancient monuments. Nightlife in Croatia’s capital city is sophisticated and fun, with many exclusive bars and clubs set overlooking the Adriatic Sea. An alternative choice is Cave Bar More, which is built into a natural cave and ensures a romantic evening.

In eight days on a yacht charter in Croatia, you’ll barely scrape the surface. With destinations in Montenegro beckoning, however, it is easy to understand why seafarers never spend too long in the same place!