About Time: You Visited the Sunshine Coast, QueenslandBy Alicia Grimshaw

The Sunshine Coast stretches from the most northern point of Bribie Island to the Cooloola Coast, with the area dotted with world-class beaches, slow-paced resort towns, surf spots and an abundance of beach-side eateries, cafes and restaurants; The Sunshine Coast is everything you could want in a holiday destination. 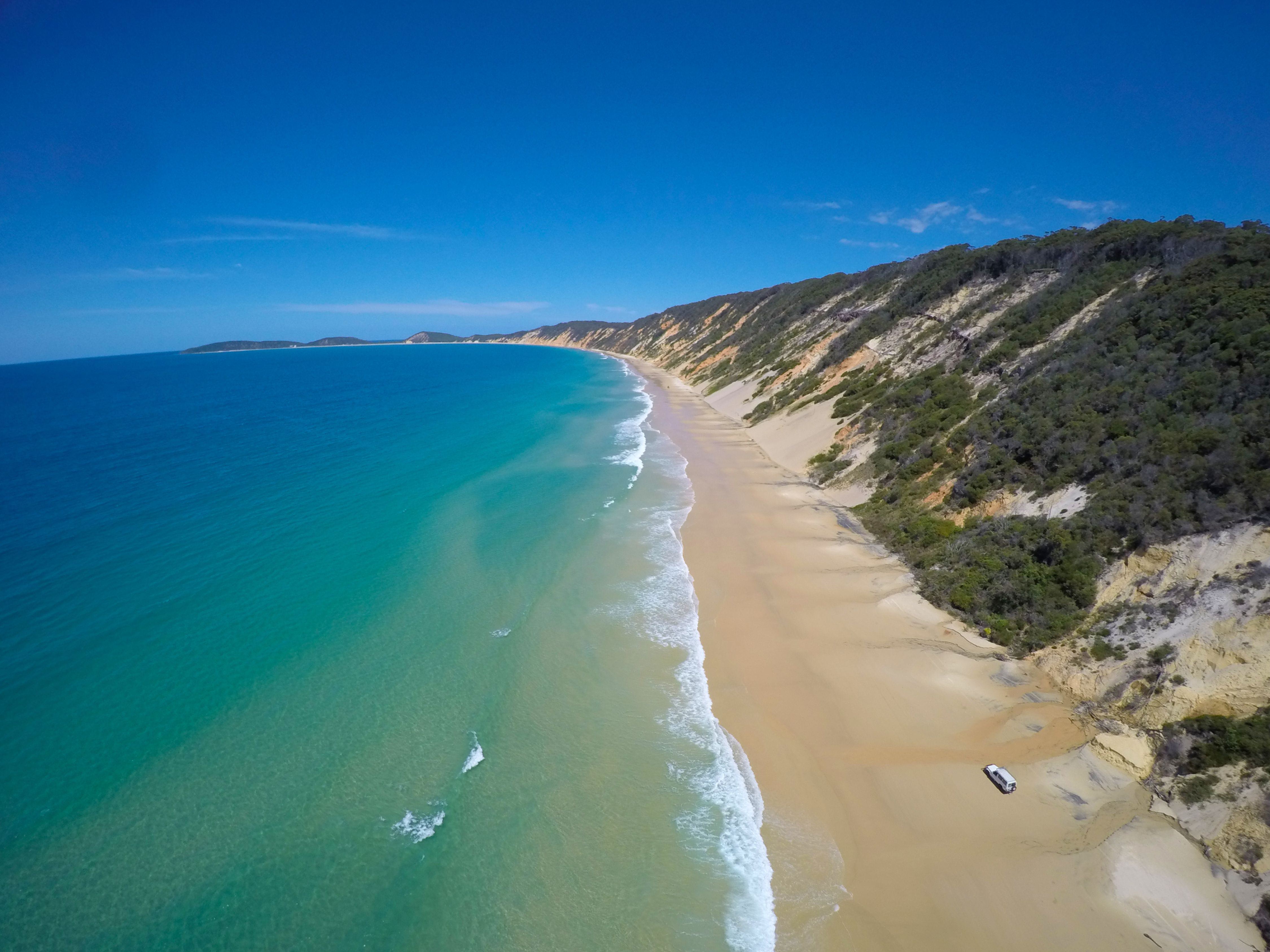 The Sunshine Coast has become popular with tourists and out-of-towners in recent years thanks to a new wave of up-market hotel openings, a craft beer renaissance, and off-road activities available. Compared to cosmopolitain Brisbane, situated a two hour drive away, the Sunshine Coast offers a gentler way of life. You can meander through upscale Noosa, with it’s fairy light lined avenues, take in the salty sea air on Rainbow Beach, or explore the Sunshine Coast Hinterland, full of stunning natural beauty and independent boutiques. Whether you’re after an fun-fulled adventure, or a couple of days R&R, whatever the time of year, here’s what to do, see and eat on the Sunshine Coast.

Sunshine Coast: What to Do 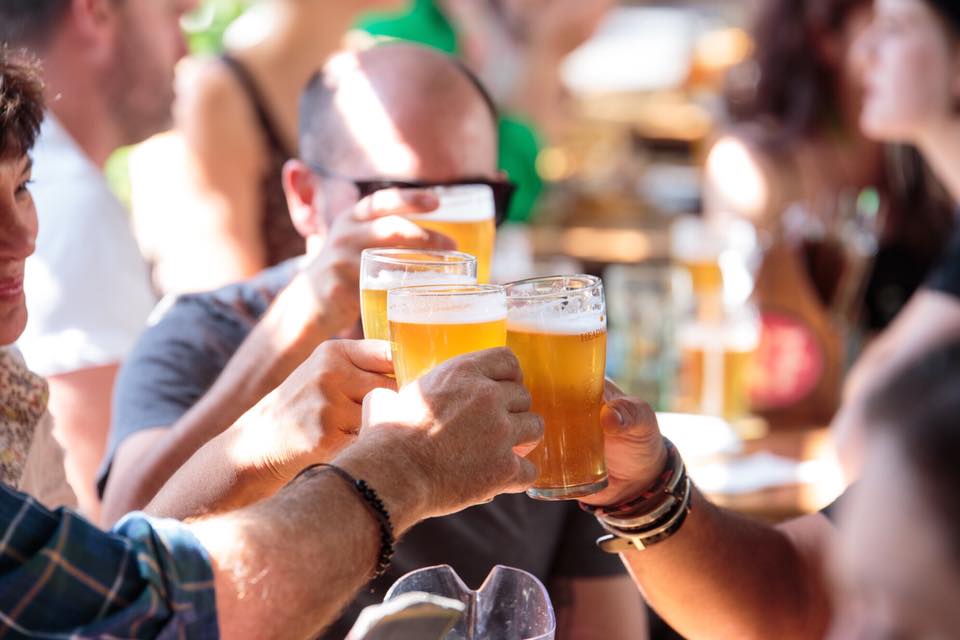 The craft beer scene on the Sunshine Coast is reaching fever pitch; there’s now 12 breweries and another four opening over the next year. The drinking and dining landscape has evolved at a rapid pace, meaning that the Sunshine Coast natives are relatively new craft beer drinkers – hence why a number of breweries produce pale ales and lagers, that are light and hoppy, with Eumundi Brewery at the forefront of brewing ‘sessionable’ beers (a phrased their brewer coined where you can drink a few of their lagers over a session in the sunshine). Eumundi Brewery is a botanical jungle; a brewery built within the former Imperial Hotel (which is now the brewery’s event space), houses an expansive outdoor eating area and bar where you can grab a burger and work your way through their solid beer selection.

Another excellent brewery is Brouhaha, notable for their craft beer made using fresh local produce. One of the biggest breweries in the area (they brew 30 different styles of beer, with a strong line-up of eight core beers), calling this place just a brewery would be selling this place short. The on-site restaurant serve up a British inspired plates using ingredients sourced from locals farms, like their mega Sunday roasts and house-roasted pork scratchings. 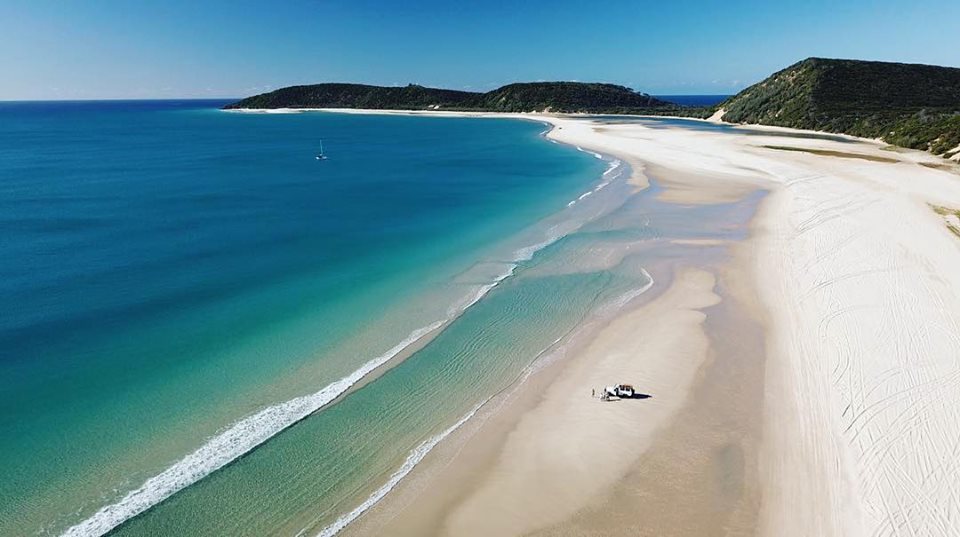 If there is one thing you need (and mean we *need*) to do whilst holidaying on the Sunshine Coast, it’s to book a 4×4 tour with Epic Ocean Adventures. Throw all the other tour pamphlets in the bin: this tour is worth your time and money.

They’ll pick you up from your hotel and drive you along the pristine Teewah Beach from Noosa North Shore to the aquatic playground of Double Island Point. Our tour guide was Vince who could’ve given Crocodile Dundee a run for his money; Vince was excellent in sharing a wealth of knowledge on the island’s wildlife as well as keeping the tunes pumping. After the hour or so journey past the coloured sands and ridiculously clear waters of Teewah beach, you’ll arrive at another watery paradise: Double Island Point.

At Double Island Point you can take part, like we did, in a range of sea-based activities such as paddle boarding, surfing and kayaking. The sea is that sort of blue you only see on postcards, but when you see it first hand, it’s incredibly memorising. The tour allows for you to get your thrills on land or on water, whatever your choosing. So if you’re happy lounging in the sun, with ice cold water on tap (they provide snacks and beverages), that’s totally cool too. 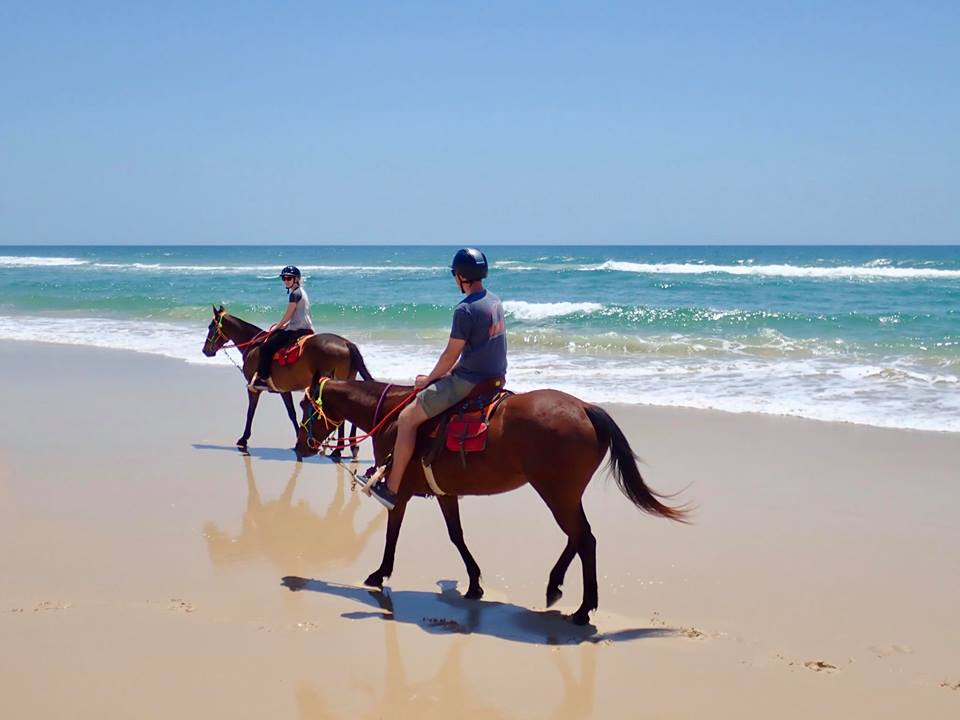 A horse ride along the beach is something you only dream of, or see in a rom-com flick. But don’t write off your four-legged hopes just yet as Rainbow Beach Horse Rides can make this a reality with their half day and day beach ride packages. One of the most memorable activities available on the Sunshine Coast, the beach rides take place along Rainbow Beach, which has picked up a string of accolades and awards including being in the top five beautiful beaches in the world. The is one experience you don’t want to miss.

Sunshine Coast: Where to Eat

A newbie on the brewery scene is Copperhead, a micro-brewery cum restaurant located within the delightful confines of Noosa Hinterland. The fun and playful approach runs though the food menu as well as the beer selection – which are only available on tap. The team at Copperhead have moved the beer goalposts, fast becoming industry leaders for their quirky tipples including the dragon fruit sour as well as a specially tart guava sour, and coffee stout. However, foodies are well catered for, as the fare here is dazzlingly gorgeous. Veggie options are plentiful like the pumpkin and pine nut arancini and baked sweet potato gnocchi. And the chicken parma featuring two hefty chicken breasts covered in breadcrumbs and finished with melted cheese is as large as a paving slab. 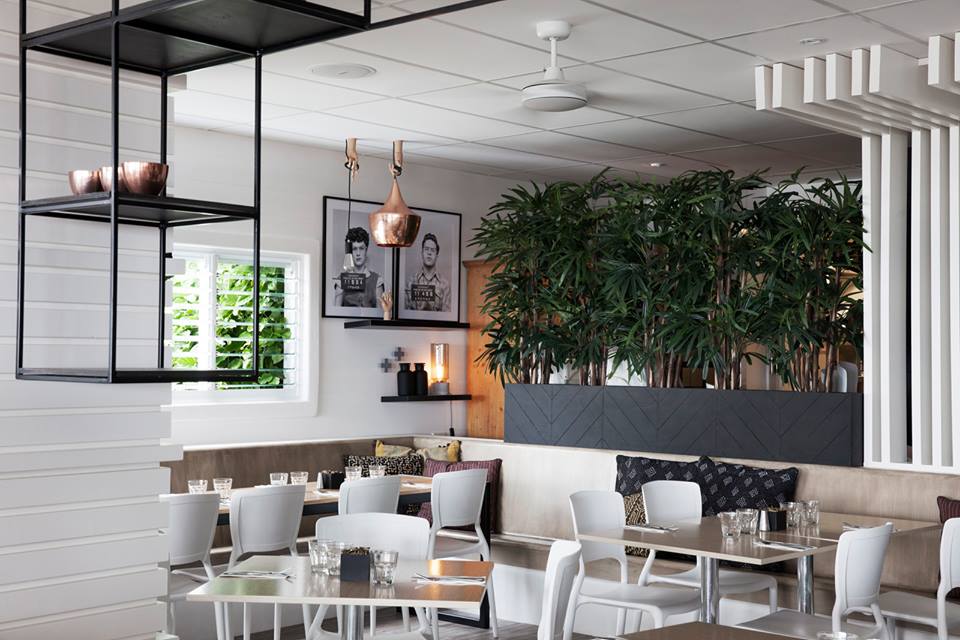 Operating from a prime spot on Noosa Beach, Bistro C is where well-heeled Australians like to brunch. The all-day restaurant is always lively, packed, and yet still manages to churn out consistently excellent globally-inspired dishes made with local ingredients. Ask for a table with a beach view, and you’ll have one of the best vistas in the area without having to wrestle with sand spilling from the bottom of your bag for the next week. Bistro C has three power moves: exceptional coffee, a team of smiling happy waitresses and waiters, and a diverse menu that goes beyond the classic avo. Try the likes of the sweetcorn fritters with deliciously crispy bacon or the almost-too-pretty-to-eat granola tower finished with a frozen scoop of acai. 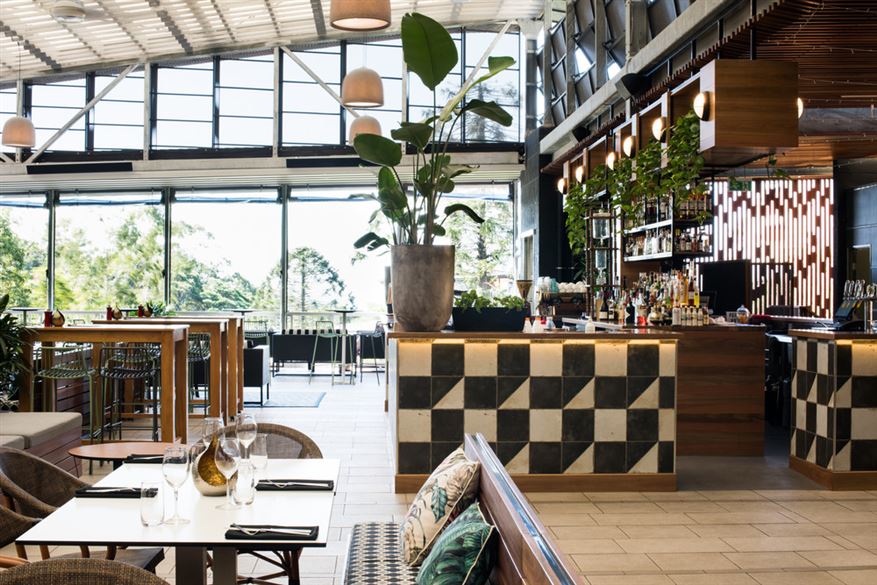 Hotel restaurants used to be where you go when you have no choice, but times are a’changing. View by celebrated chef Matt Golinski (a regular on Australian Ready Steady Cook) is housed within the Peppers Resort and Villa complex, but the standard here goes above any stuffy hotel restaurant. The food is vibrant and fun, with Matt creating dishes which profile Noosa ingredients and produce. Wondrous fusion creations feature like slow braised beef short rib with sticky black rice, tempeh and aubergine san choy bau, and lemongrass and ginger prawns. Even if you don’t plan on staying at Peppers Resort, come for diner and enjoy every single bite.

Sunshine Coast: Where to Stay

What to know a secret? Spices Tamarind Resort is the best kept secret in Queensland. This eco-friendly, back-to-nature resort is an haven for letting go and switching off. Set in the charming countryside of Maleny, Spices Tamarind Retreat is intimate and private – and houses a number of accommodation options. The lush green paradise is filled with stand-alone villas which boast two bedrooms with king size beds, both with an en-suite, a kitchenette, living room, and sprawling outdoor area. This Asian-inspired getaway allows you to get back to nature with the added luxury of five star food, morning yoga and luxury accommodation. Visit for the beautiful setting and beautiful food, and prepare to be wowed. 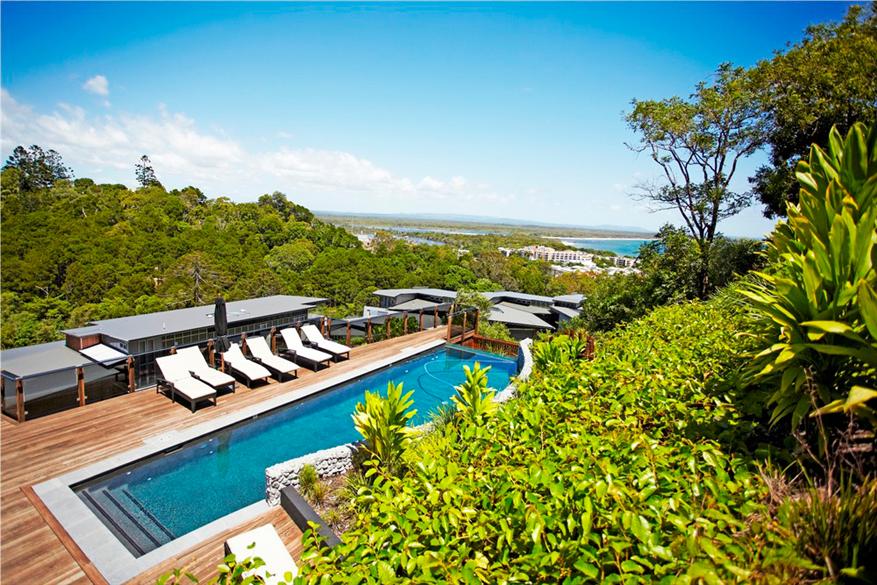 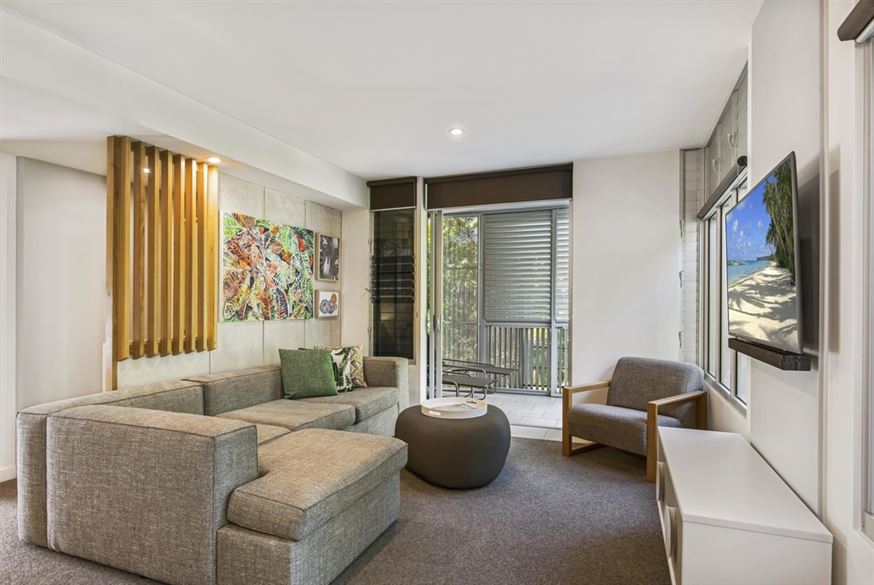 Affluent Australians look to Noosa for their holiday kicks. Noosa is a small, polished beach resort with a lively mix of alfresco dining spots, easy breezy lifestyle and heavy surf. Located on the edge of  Noosa National Park, Peppers is an upmarket apart-hotel resort that is a mere 500 meter stroll away from the thick of it, but far enough away for quiet evenings and quiet afternoons by the pool. Apartments range from studios right up to four bedroom villas, which hit the holiday check list: clean, spacious, and modern. Make a bee-line for the breakfast buffet; an assembly of just about anything your heart and stomach desires, as well as perfectly made cappuccinos.