Sanatorium, noun: an establishment for the medical treatment of people who are convalescing. There is no better word to communicate the experience of staying at Hoshino Resorts KAI Kaga after a long time shlepping around Tokyo, walking 20km a day through the many mad districts, a voyeur to the daily spectacles and endless parades of shops and food which would surfeit the senses of any sensible human being. Enter stage-left Hoshino, a sanctuary for the senses, somewhere you will be taken care of, but also left to your own devices to recuperate, unwind and re-charge. 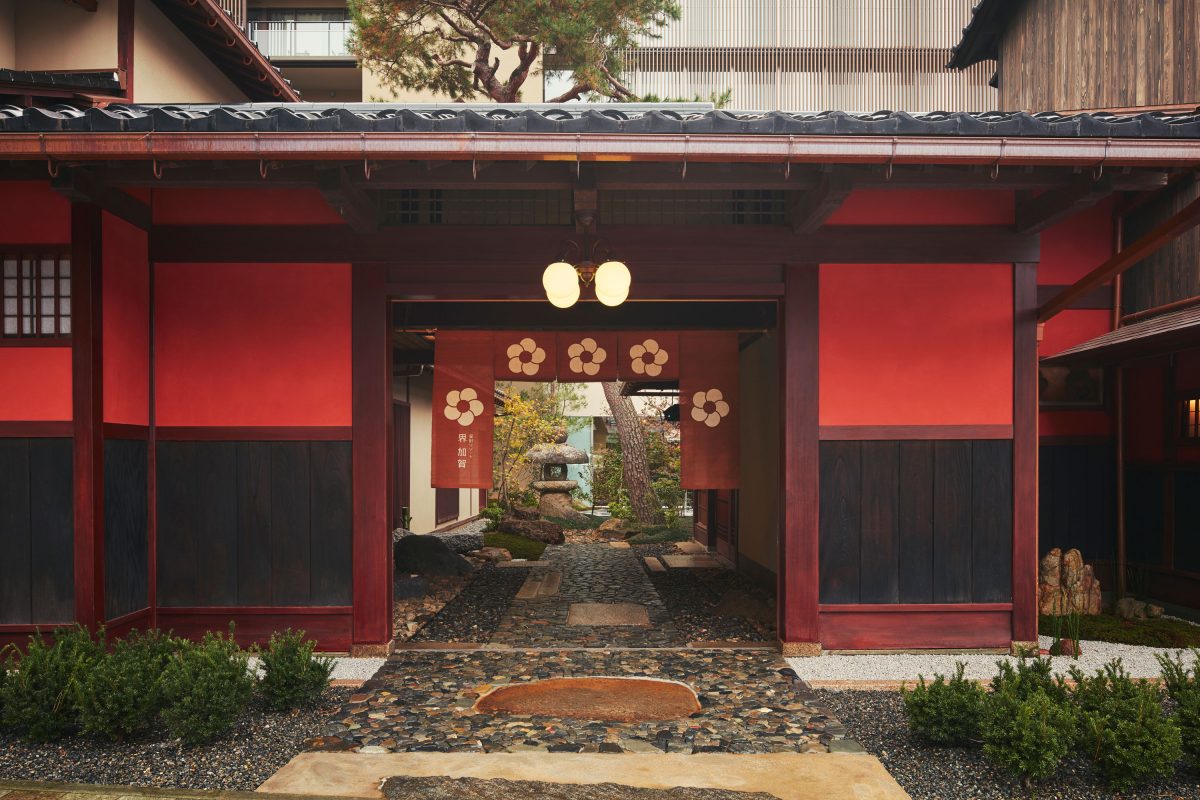 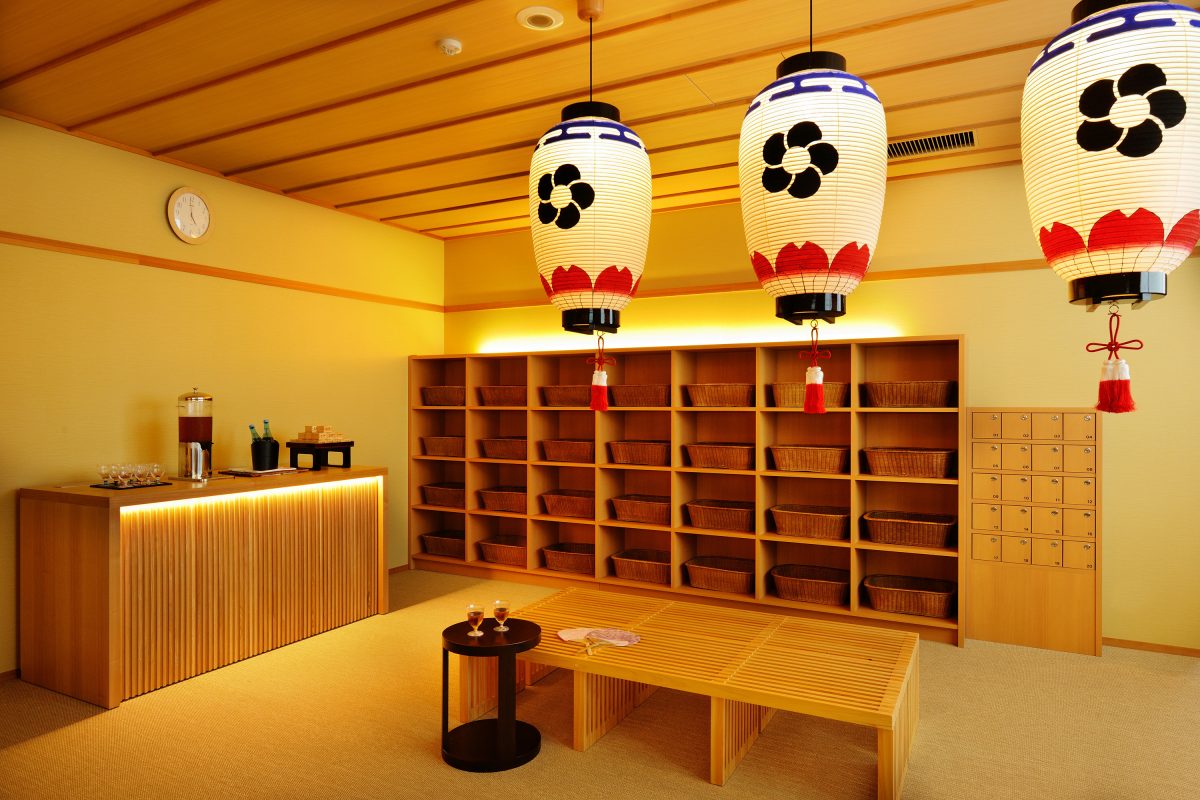 This Kaga hot spring inn is steeped in tradition, and the hotel is peppered with thoughtful gestures towards ancient Japanese culture. There is even a little tea house on-site, in which you can take part in a tea ceremony – a ritual drinking of matcha green tea which is heavily influenced by zen principles. You can pop into the tea house any time to perch on a tatami matt and sip on a revitalising tonic served in traditional Japanese wares. There’s also a nightly performance of traditional Japanese dance which takes place in the library, in which performers act out a samurai combatting a mythical shishi lion by using a large and colourful wooden shishi head which snaps and snarls at audience members. 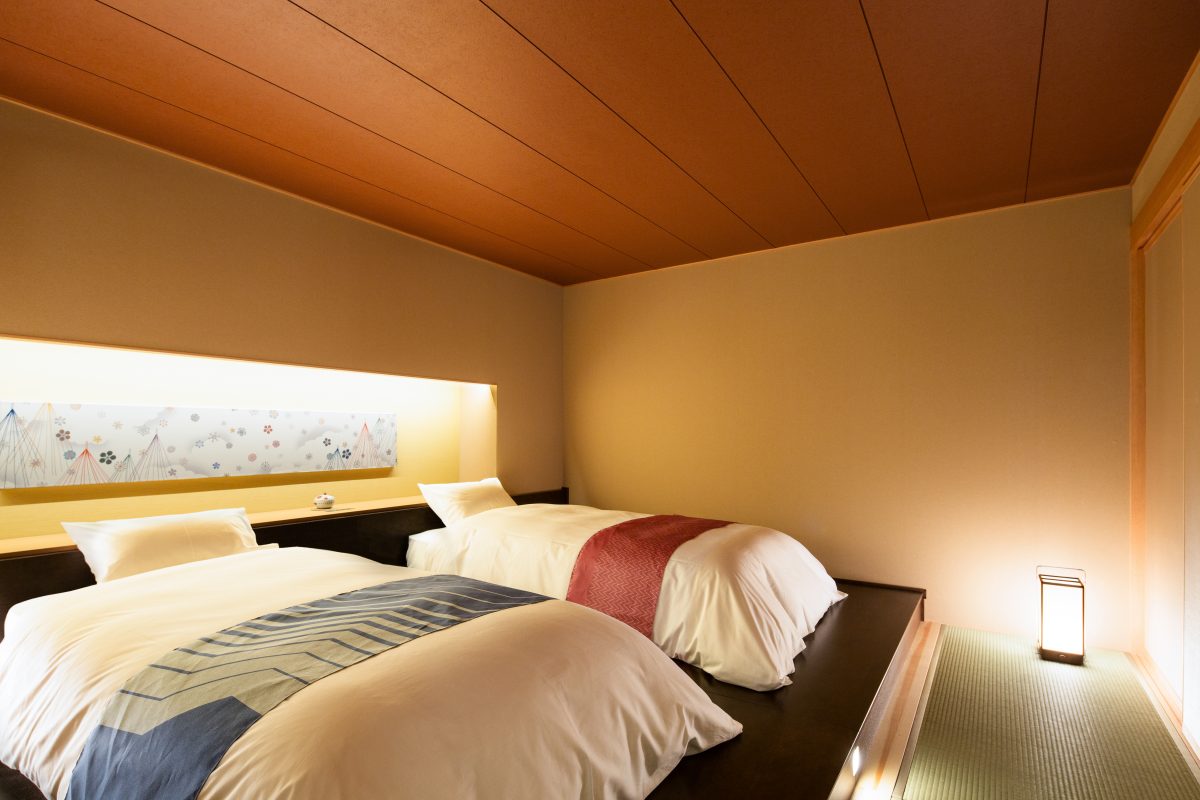 The rooms are immensely simple and stripped back, focussing on low-slung futon beds, sofas and coffee table which offer a sense of calm just by virtue of the simplicity. The bathrooms have double showers with huge windows with views over the town, and the products are again Muji-like in their simplicity, and refreshingly in re-usable bottles, unlike the usual wasteful mini-bottle phenomenon which plagues almost all hotels. Some rooms come with outdoor hot spring baths on the balcony too… 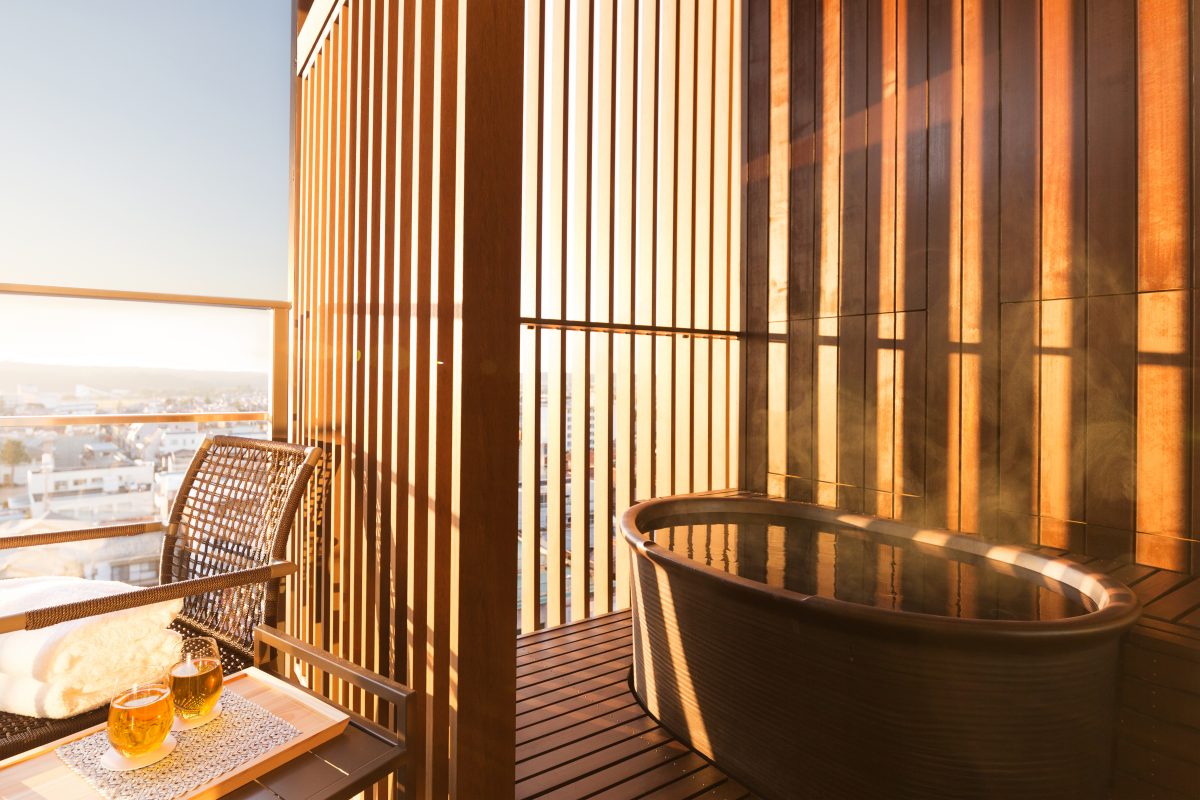 Each room comes with a yukata and tabi, traditional robes and socks used for onsens (hot springs). The best thing about this place is that it’s socially acceptable to wear your yukata throughout the hotel, and even to dinner, all day every day. You’re even provided comfy slip-on shoes which force you to shuffle, meaning your pace is ALWAYS glacial and slug-like as if just woken from a drugged glorious nap (see? Sanatorium vibes). 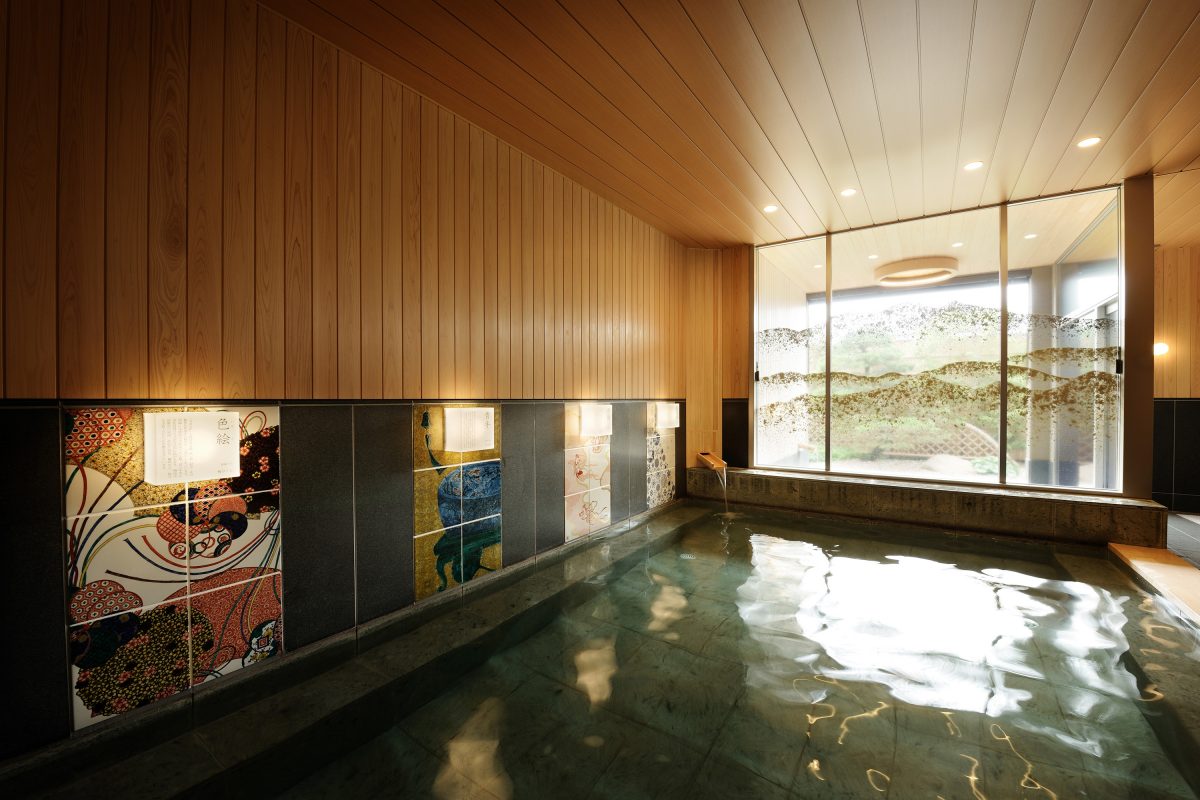 Talking of onsen, the hotel has a beautiful one of its own and for anyone unfamiliar with the culture of hot springs in Japan, it’s one well worth putting it on your agenda if you visit. ‘Onsen’, or ‘hot spring’ also extends to cover the bathing facilities and traditional inns frequently situated around a hot spring, and this onsen has both an indoor and outdoor spring, which is in essence, like an enormous bath-come-swimming pool.

The baths are separated by gender, and traditionally you go in your birthday-suit (aka – naked), so don’t be alarmed and just embrace it. After reaching a transcendent level of chill in the onsen, the hotel offers in-room shiatsu massages, where a trained masseuse will set up shop on your bed and administer a full body shiatsu massage, focussing on problem areas to relieve anything from stress to constipation. 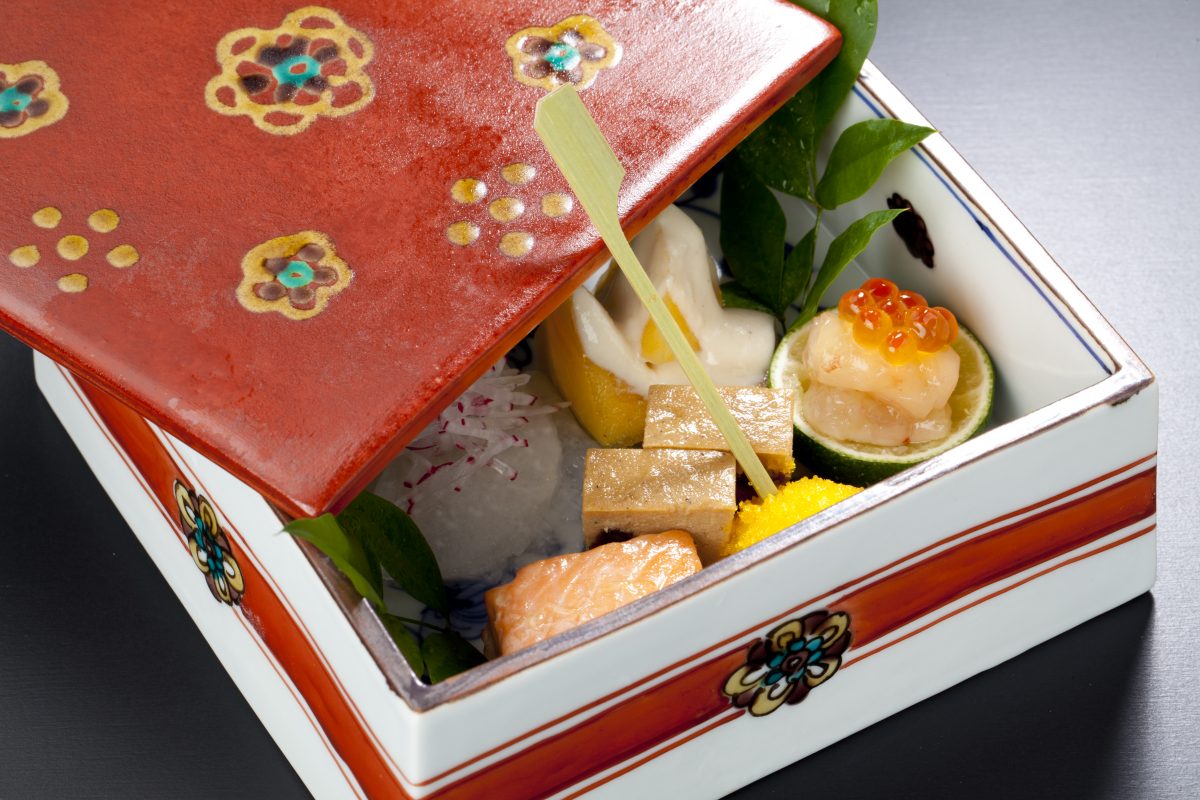 Kai Kaga also focuses on traditional Japanese dining and philosophy which elevates the dishes on which the food is served to the same level as the food itself, believing “dishware are the clothes worn by the food”. Dinners consist of multi-course visually stunning dishes made with seasonal ingredients, while mornings begin with a set meal including a regional hot pot ‘Ishiru Nabe’ with local seafood as the main dish. Fair warning, the hotel doesn’t serve western food, so buckle up for a truly authentic Japanese experience. 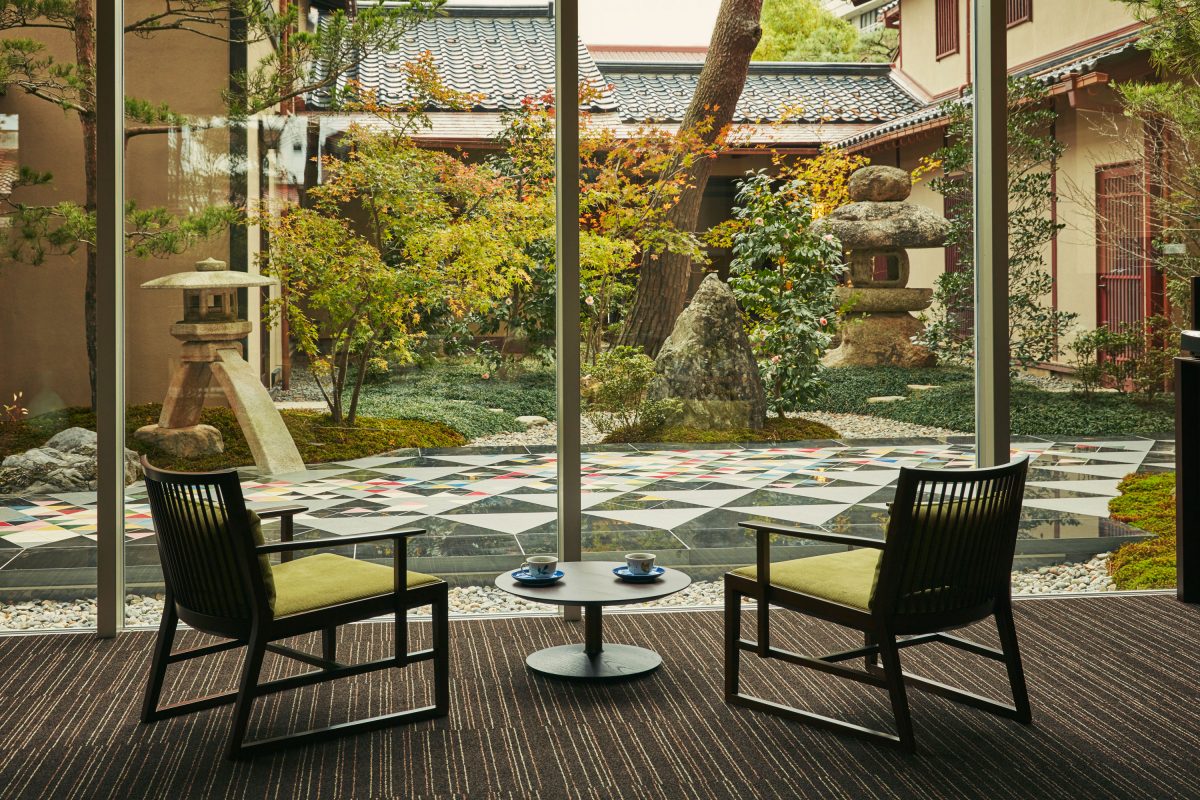 Kaga is also close to various nature-spots, including Kanazawa’s Kenroku-en Garden, and if you have access to a car you should take a drive to Hakusan Shirakawago White Road. Kakusenkei Gorges are a ten-minute drive away, and there’s a local bus you can catch which will take you there too. It’s the perfect place for an afternoon walk amidst the river and beautiful bridges and it’s becoming known for the zen practice of Forest Bathing – removing yourself from the frenetic intensity of digital life to just sit and absorb the world around you. And Hoshino Resorts KAI Kaga offers the same special opportunity to just unplug, and be. 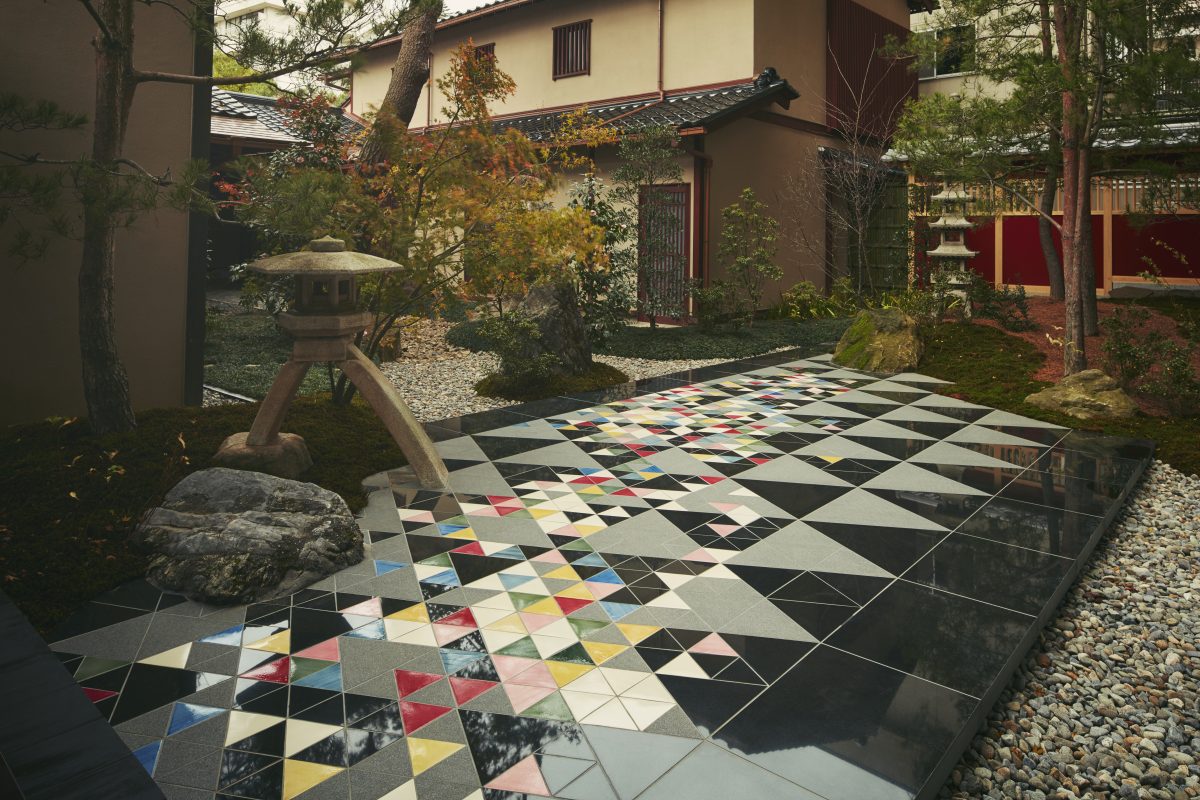 Claudine Levy and Angelica Malin were hosted by Hoshino Resorts’ KAI Kaga, a boutique hot spring ryokan in Yamashiro Onsen, Ishikawa Prefecture. Located three hours by train from Tokyo, and close to the city of Kanazawa, the hotel has been preserved from a four-century-old ryokan building and offers guests a genuine Kaga experience. An overnight stay costs from £320 per room per night (two sharing; dinner and breakfast included). To book: +81-(0)50-3786-1144 / www.kai-ryokan.jp/en/kaga/.