Nick Willing’s documentary, Secrets and Stories, is to be shown on BBC2 on Saturday March 25th at 9pm. The documentary, sharing the life and work of his mother, the notoriously guarded artist Dame Paula Rego, is nothing short of a masterpiece.

The reason for this is quite simple. Not only do you come away with a greater appreciation of Paula’s paintings, but the tenderness with which Nick treats his subject creates in the viewer a huge affection for the artist to the extent that you want to love and soothe some of her pain. You want to be her new best friend. 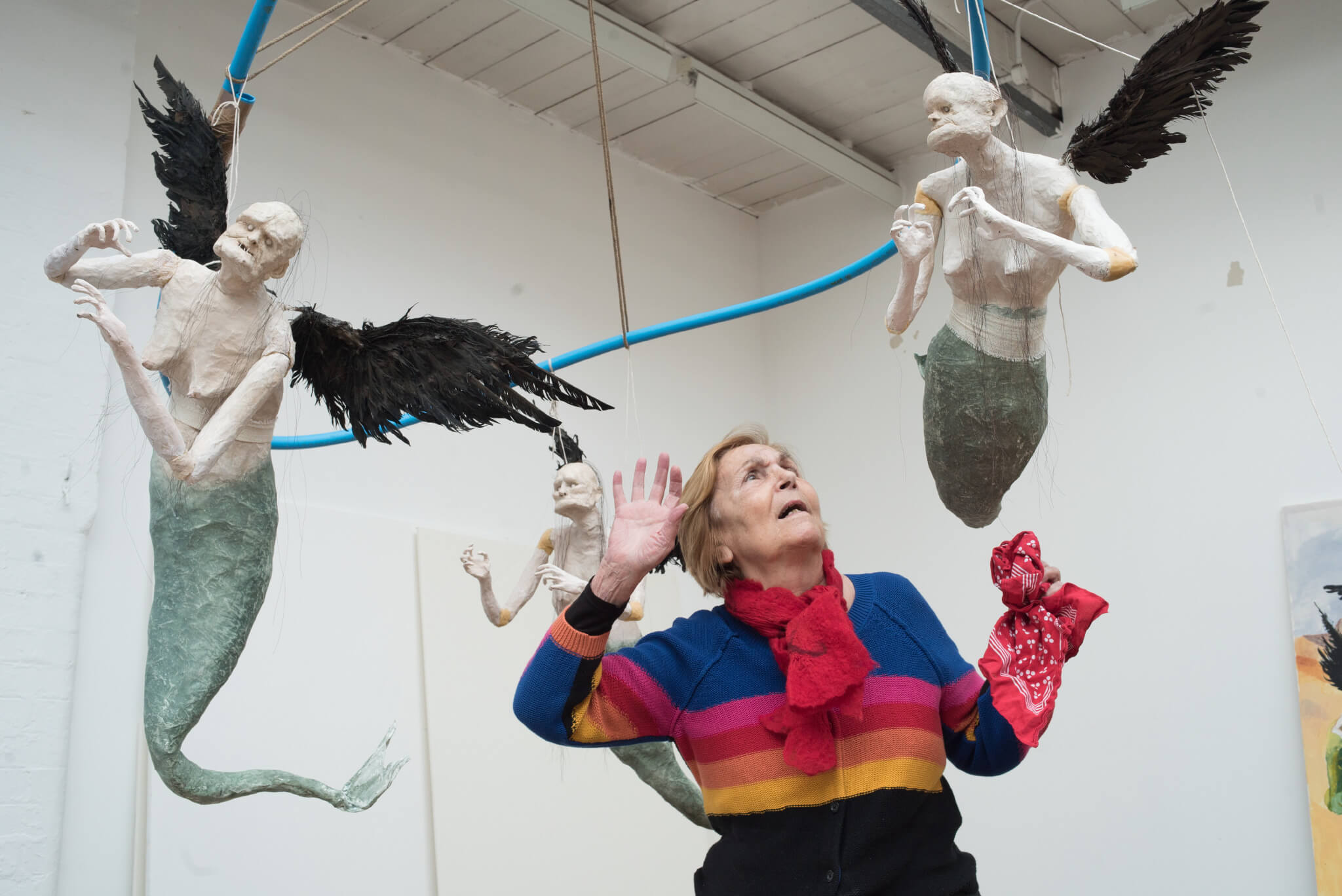 This feeling of empathy brings you closer to the understanding of that which matters most to Paula: her painting. Paula Rego paints pictures to fix the past and to magically instruct the future. Nick takes you along the journey of her mind, one that has known the agonies of manic depression. I sit down with Nick, son of artist Victor Willing and Mother Paula Rego, to talk life, love and art:

What was it like to be the child of such eminent parents? 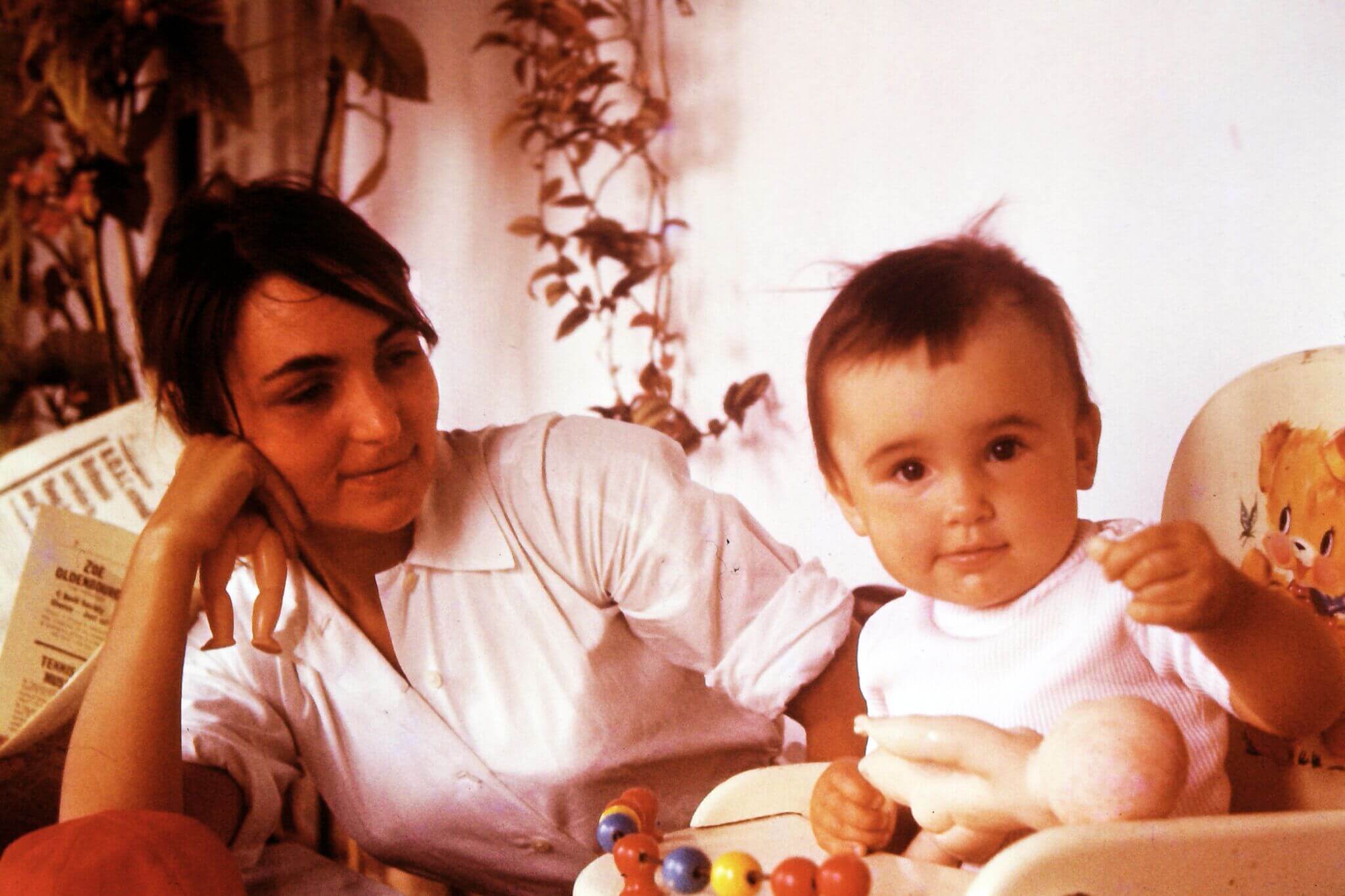 My parents were often absent,  I remember that all my friends’ parents lived with them as they grew up but mine didn’t. My sisters and myself were left to live with my grandparents in Portugal for long periods whilst my parents were away. 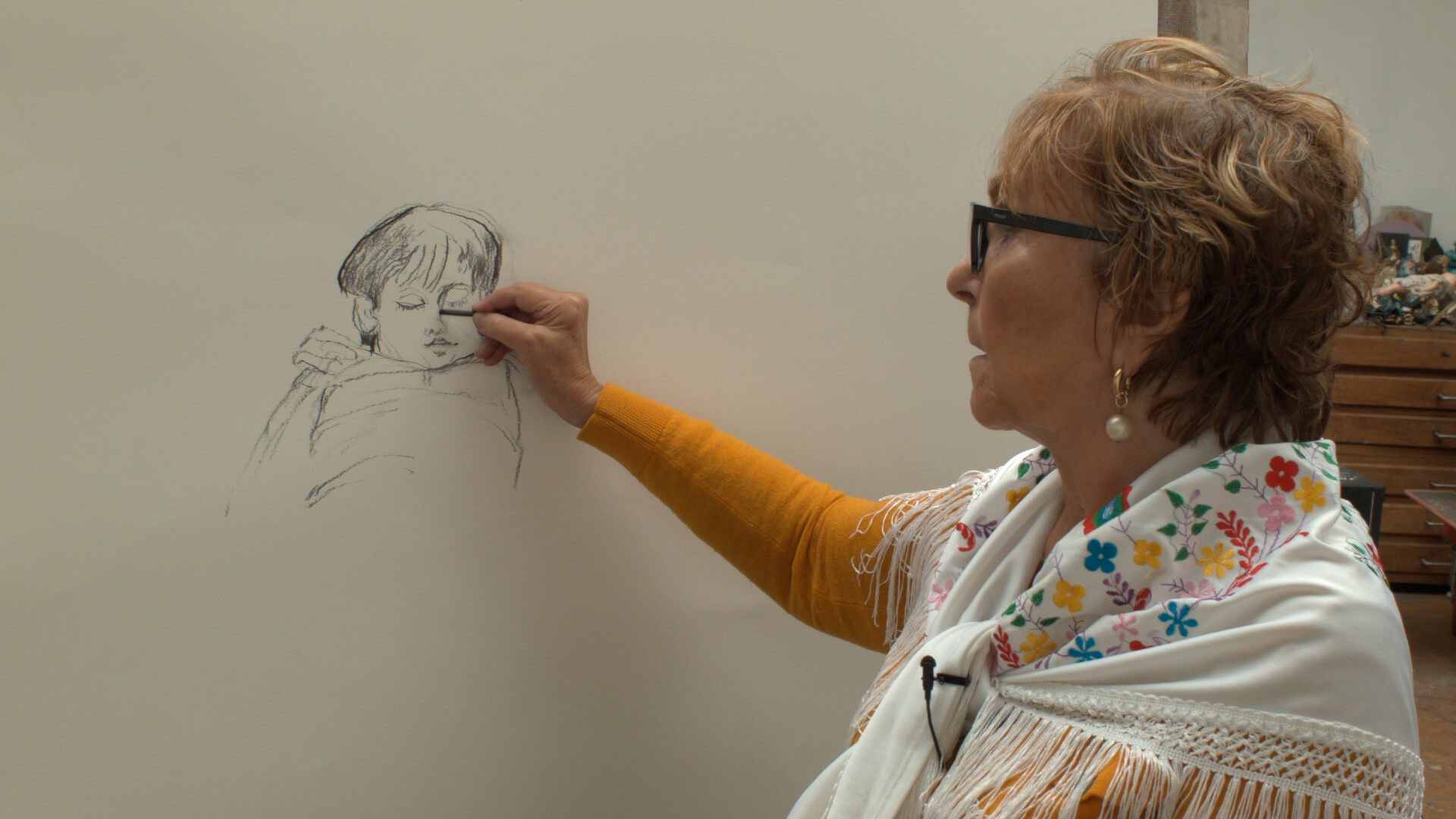 I saw my parents’ profession as artists as the obstacle which prevented them from being with my two sisters and myself so when I was about eight years old,I asked my father, quite crossly in fact “What is the point of being an artist?”

What did he reply? 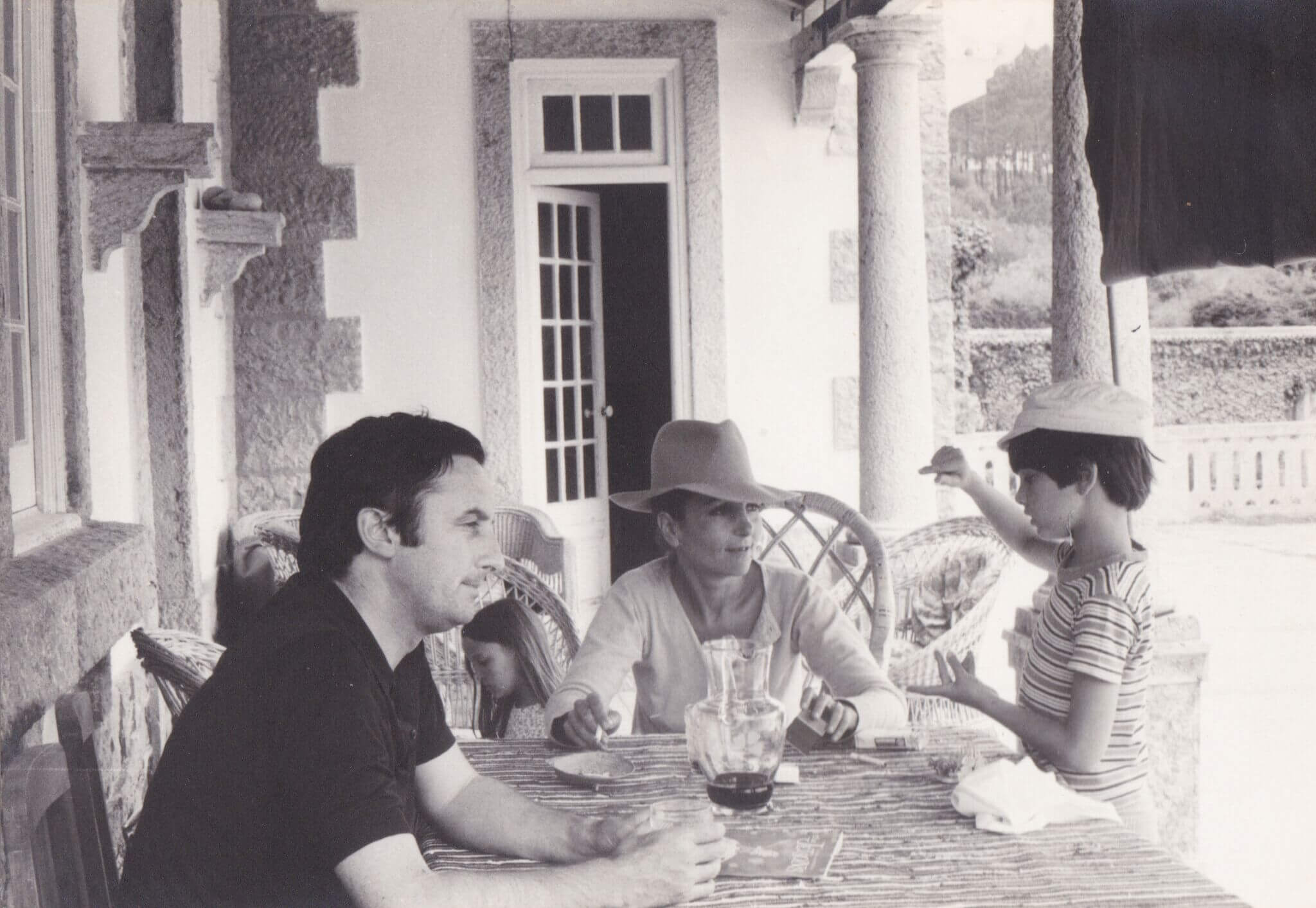 Nick, who credits his father with being the wisest man he ever met, smilingly remembers his father’s answer.

He said that an artist is like an explorer who goes to places that no one has ever been before and comes back with a picture of it that no one has seen but everyone recognises.

From then on I remember thinking how interested I was to see what they brought back as the explanation seemed perfectly logical. A lot of my mother’s work is surprising yet familiar, that’s what life is and this is what an artist will not be afraid of doing… exploring . Of course, not to be around them was a shame because they were fun to be around but I understood.

Your film shows the close bond between you and your mother, can you tell me more about your childhood? 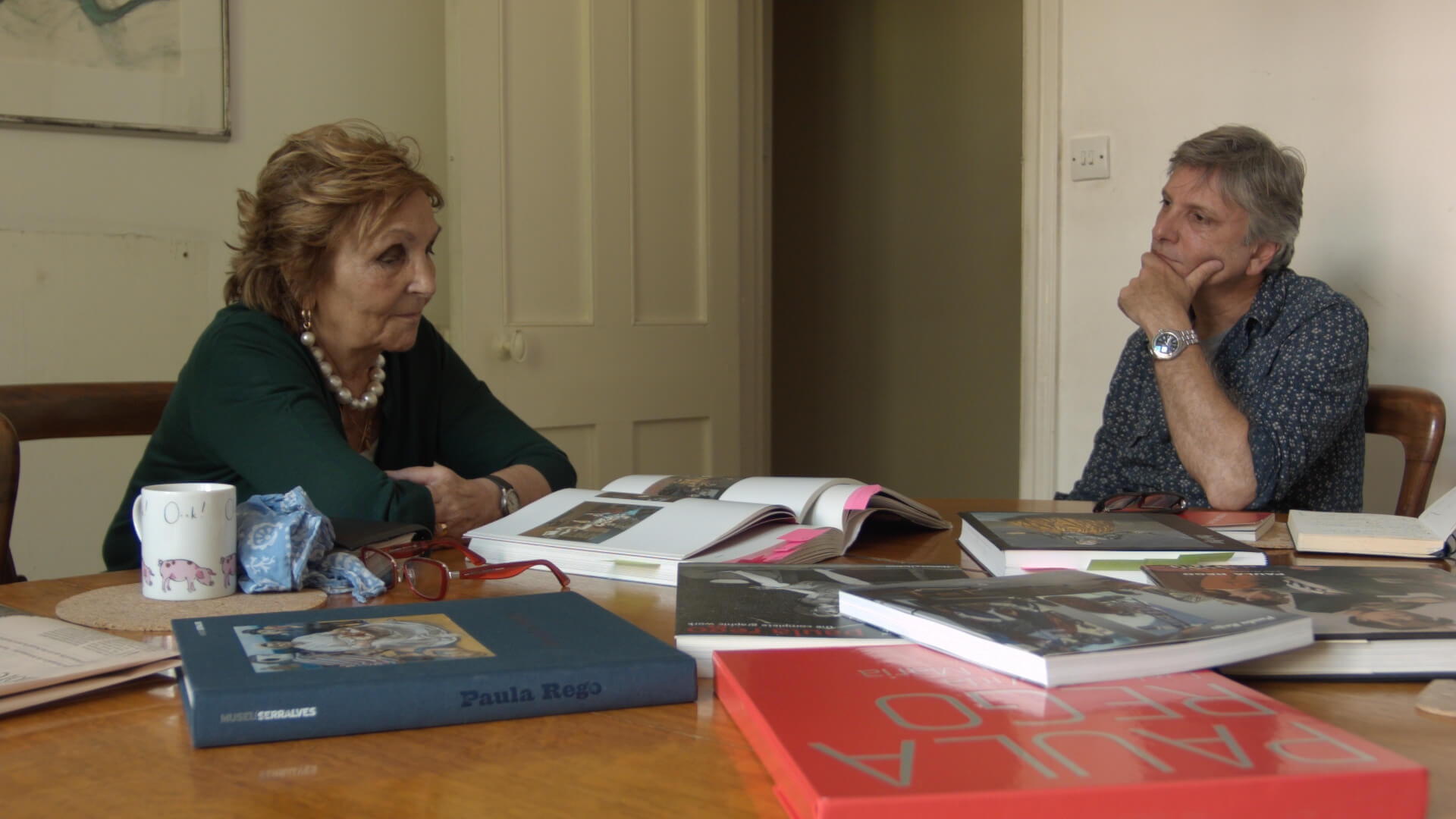 I did connect with my mother. We drew together almost from birth. When you draw with someone it transcends language. You connect without the need to speak. You can draw someone, make fun of them even and it can still be tender and sympathetic. I felt through drawing with my mother that we had a connection that no one else shared. She would draw a picture of someone, I would wordlessly respond by drawing the wife of that person and then she drew other relatives, then we drew their animals . It went on and on and we laughed throughout the magical telling of our visual story.

Tell me more about special times with your mother? 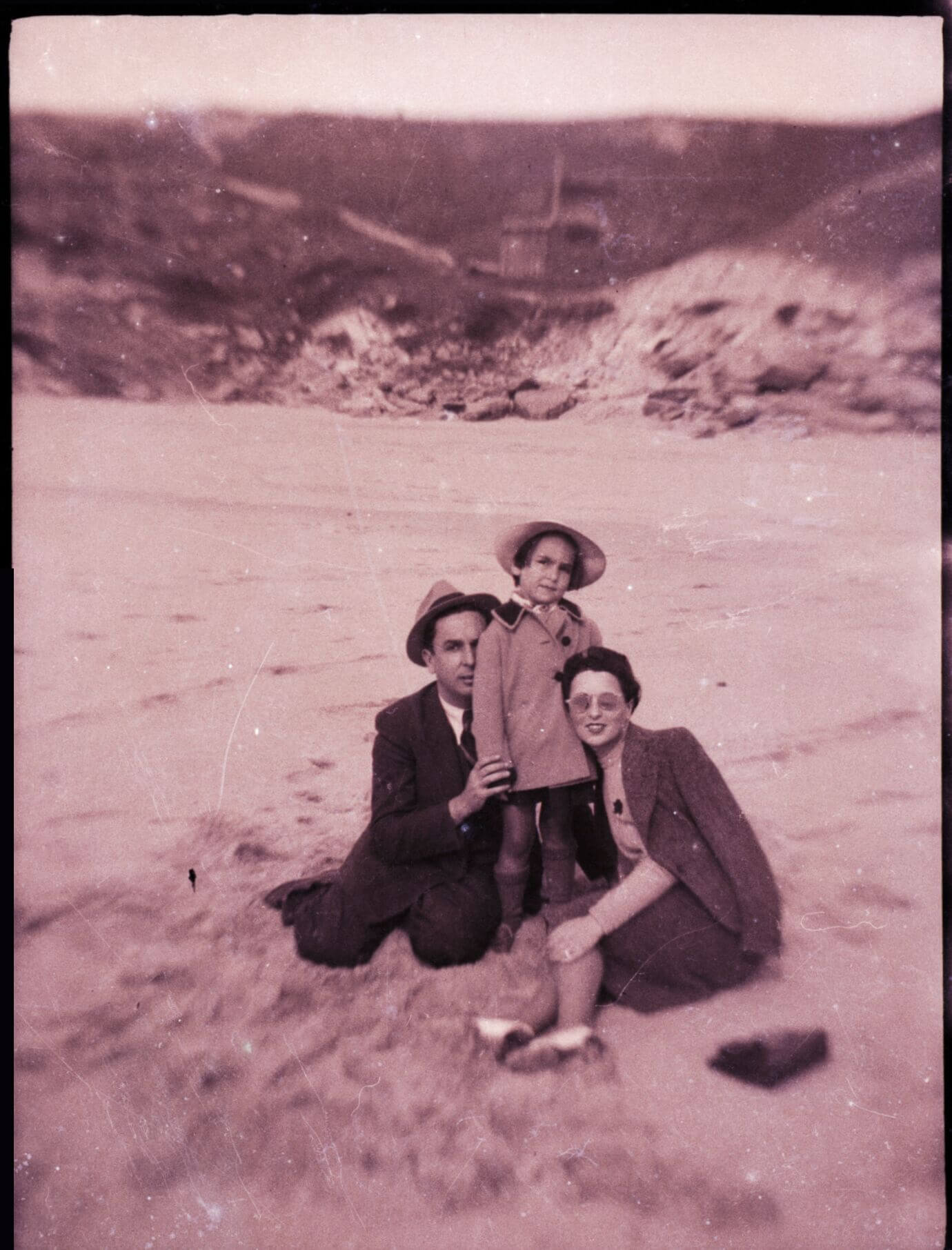 I remember when I was eight I had my appendix out. The surgeon in Portugal arrived at the hospital drunk and in his dinner jacket. My scar is a huge zig zag across my body. It got infected and my mother moved into the hospital and stayed with me the whole two weeks.

What did you do during that time?

We drew  and drew – amazing characters, one of which was my appendix which took the form of a giant. I would do a  square of the picture then she would do the next square. Like a comic book. Throughout the two weeks we not only drew but I would also love to hear her talk about art.When she talks about art and painters she loves like Titian – you get it. You just get it. The moments we had together I cherish still.

How could you laugh when you had appendix stitches?

It was terribly painful, the most painful thing in the world. My mother enjoyed making me laugh even though it hurt my stitches. That mixture of pain and laughter is very much my mother. Her paintings often explore the  connection between conflicts – love and cruelty for instance.

Do you have an example of exactly what you mean by this?

The painting entitled “Target” shows this – it is one of the dog woman pictures which expresses the intense love that Paula had for my father. It is a picture of a woman helping her husband to shoot her. 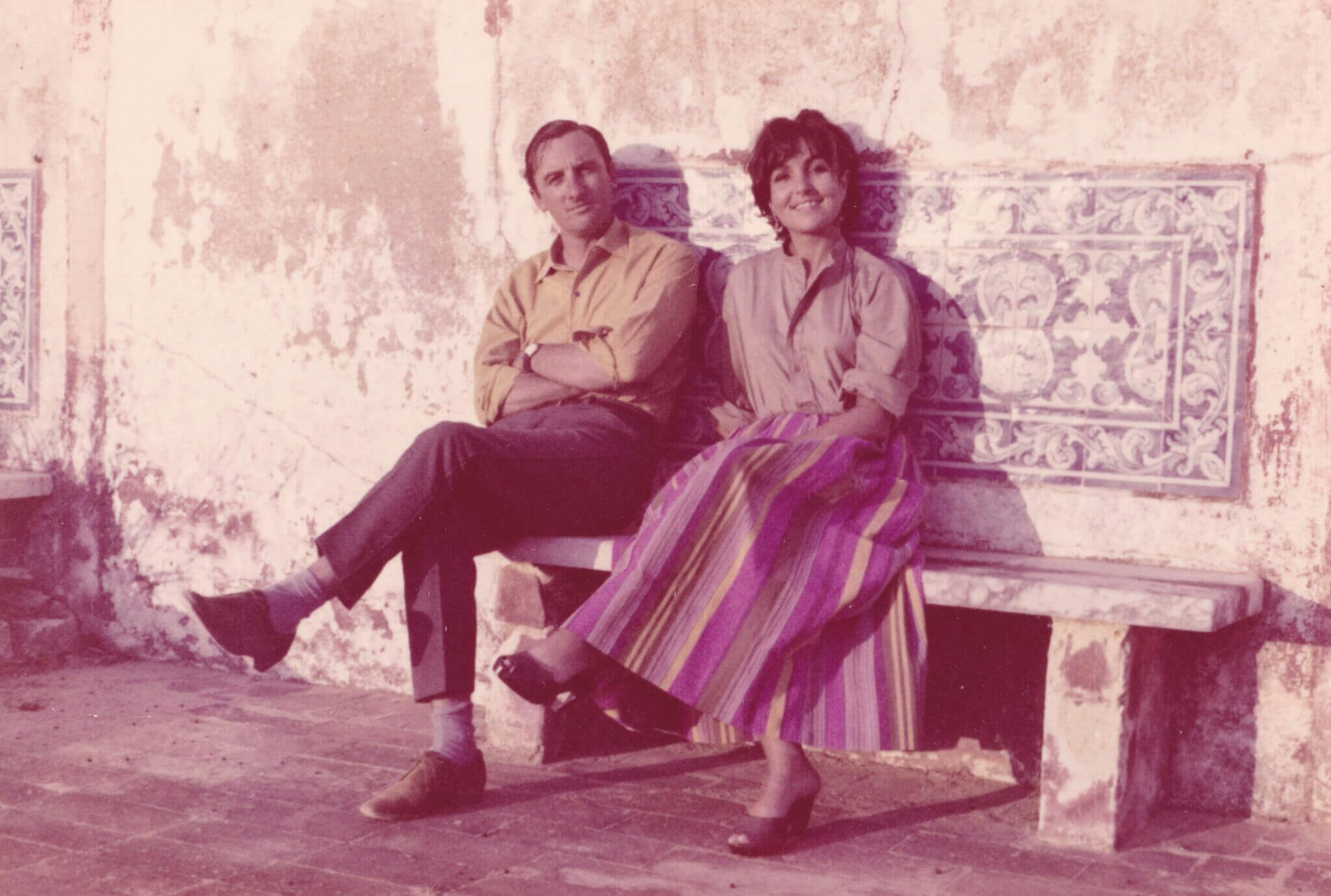 That’s what love is. Love is not one emotion but a mixture of many emotions, good, bad, nourishing, castrating. That’s why we are so afraid and hypnotised by it. It’s something we all want and least understand.

Did you feel loved by Paula? 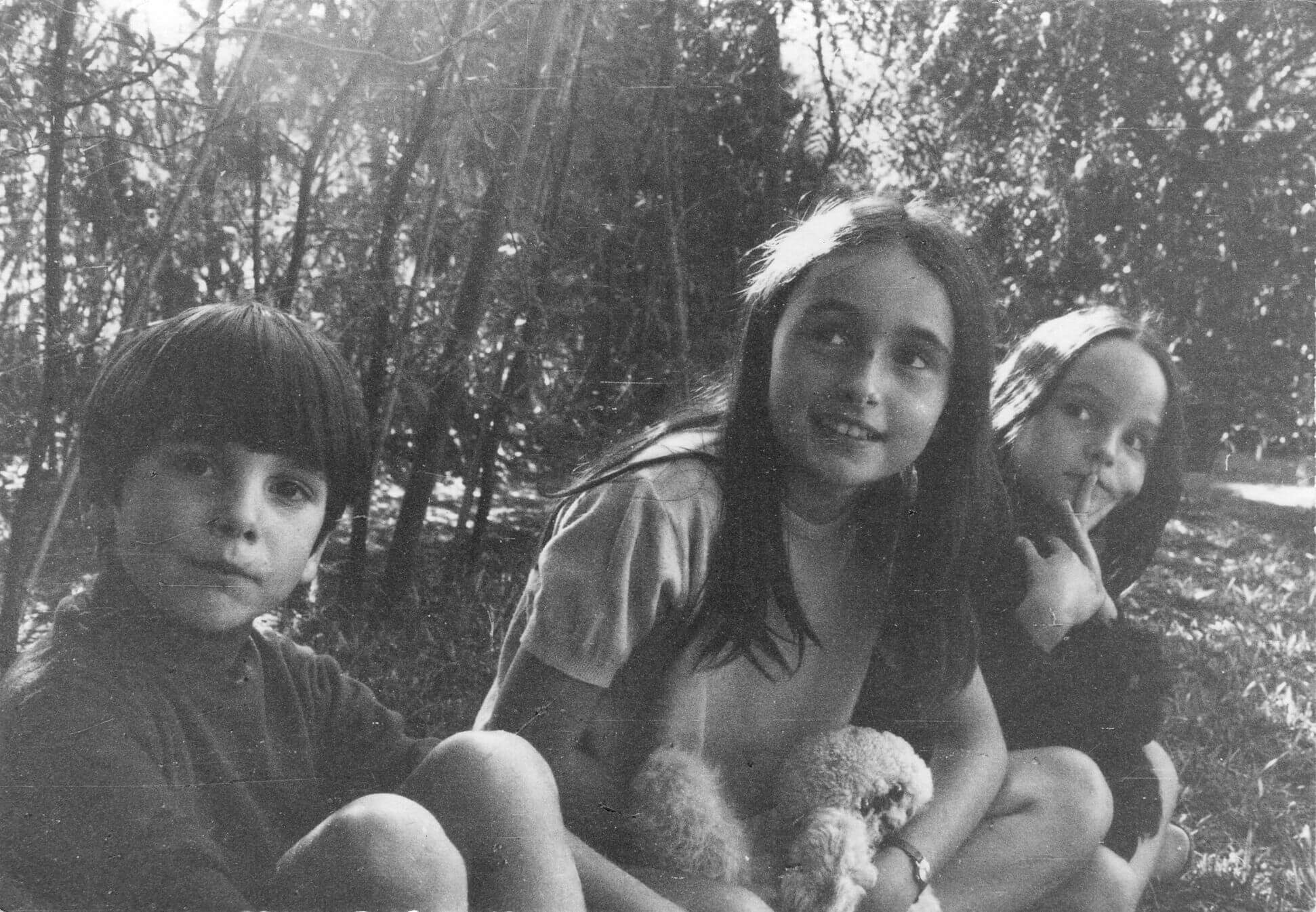 My mother tells me that she loves me now but people didn’t when I was growing up. It was a different time. She believed in me. The number one job of a parent is to believe in the child. I always felt that she thought I was the most important draughtsman who ever lived.

How did she teach you to draw?

I learnt to draw by accident. She taught me that in order to get any emotion out I had to draw it in a picture, for instance she made me draw jealousy and by doing that I accidentally found I was drawing. I wasn’t thinking about drawing or making art. 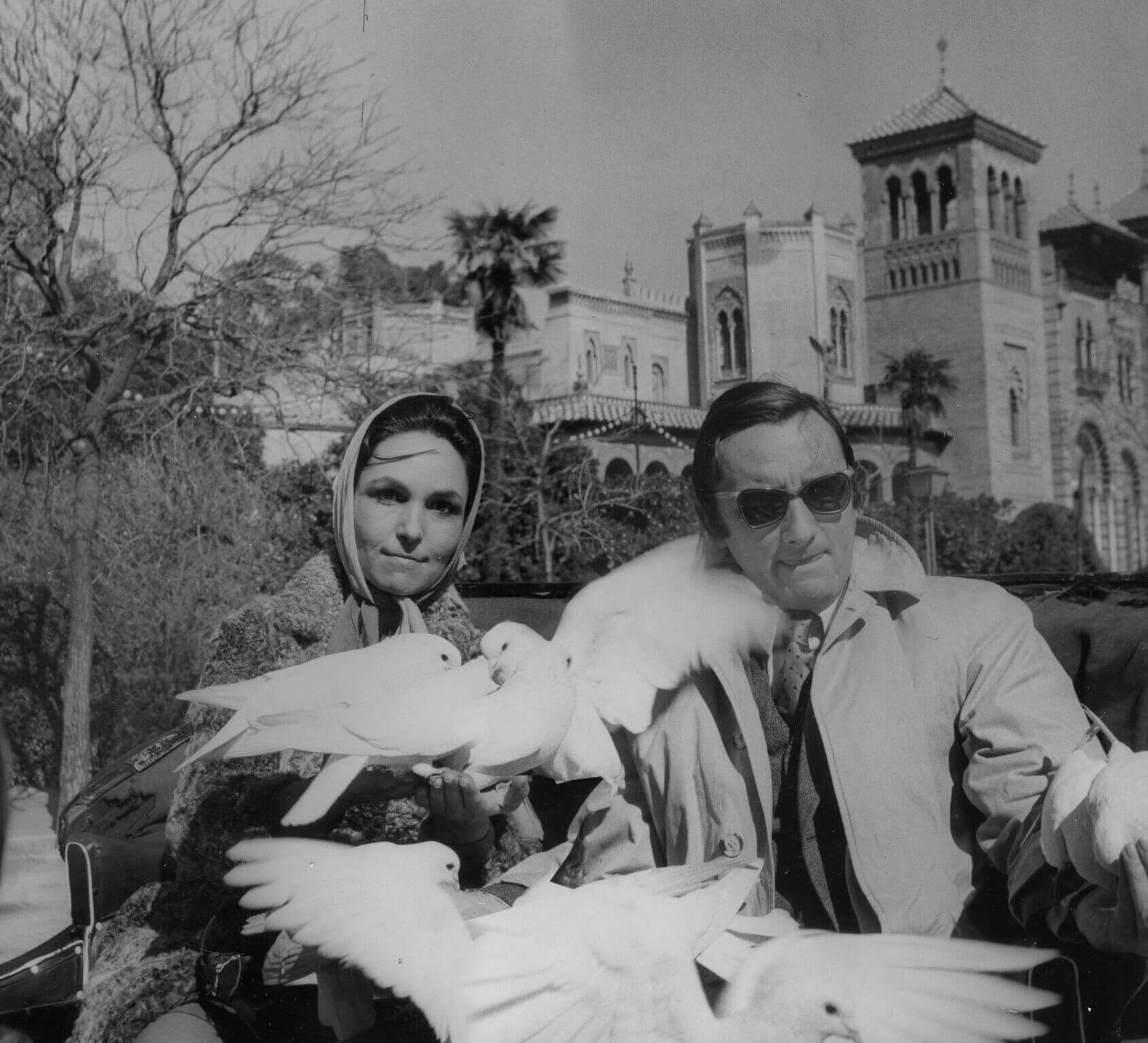 My mother often struggled with ‘doing art’ and preferred the freedom of just drawing. It was when she was allowed to forget about art that she did her best work. This was the same way she introduced me to drawing – by accident!

In your mother’s pictures, the ability to paint her emotions has been her saviour. I am thinking of the part of the documentary when Paula describes how she found that your father, Victor Willing snogging a girl in her sitting room and went to tell her best friend who burst out crying because she was also having an affair with your father. In the documentary, Paula explains that I instead of confronting your father, she kept silent and used her painting both as a tool for expression of anger and also revenge. Did Paula similarly train you to use the tool of expressing your emotions in drawings? 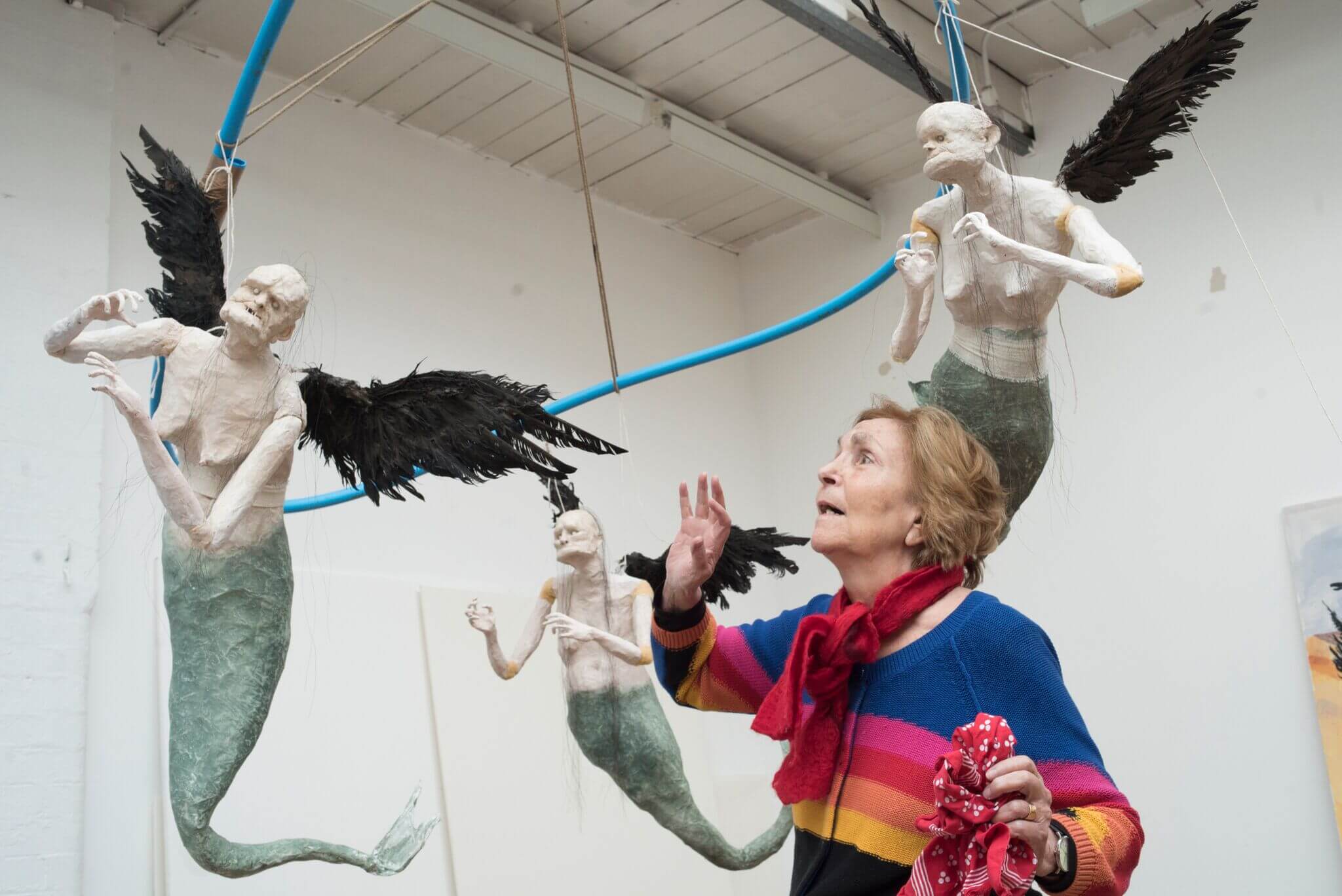 I went to Bryanston as an undersized boy from Portugal without enough command of the language. I had braces on my teeth, over large spectacles and eczema which had to be covered with lotions and then with plastic gloves. Not exactly a pretty sight! 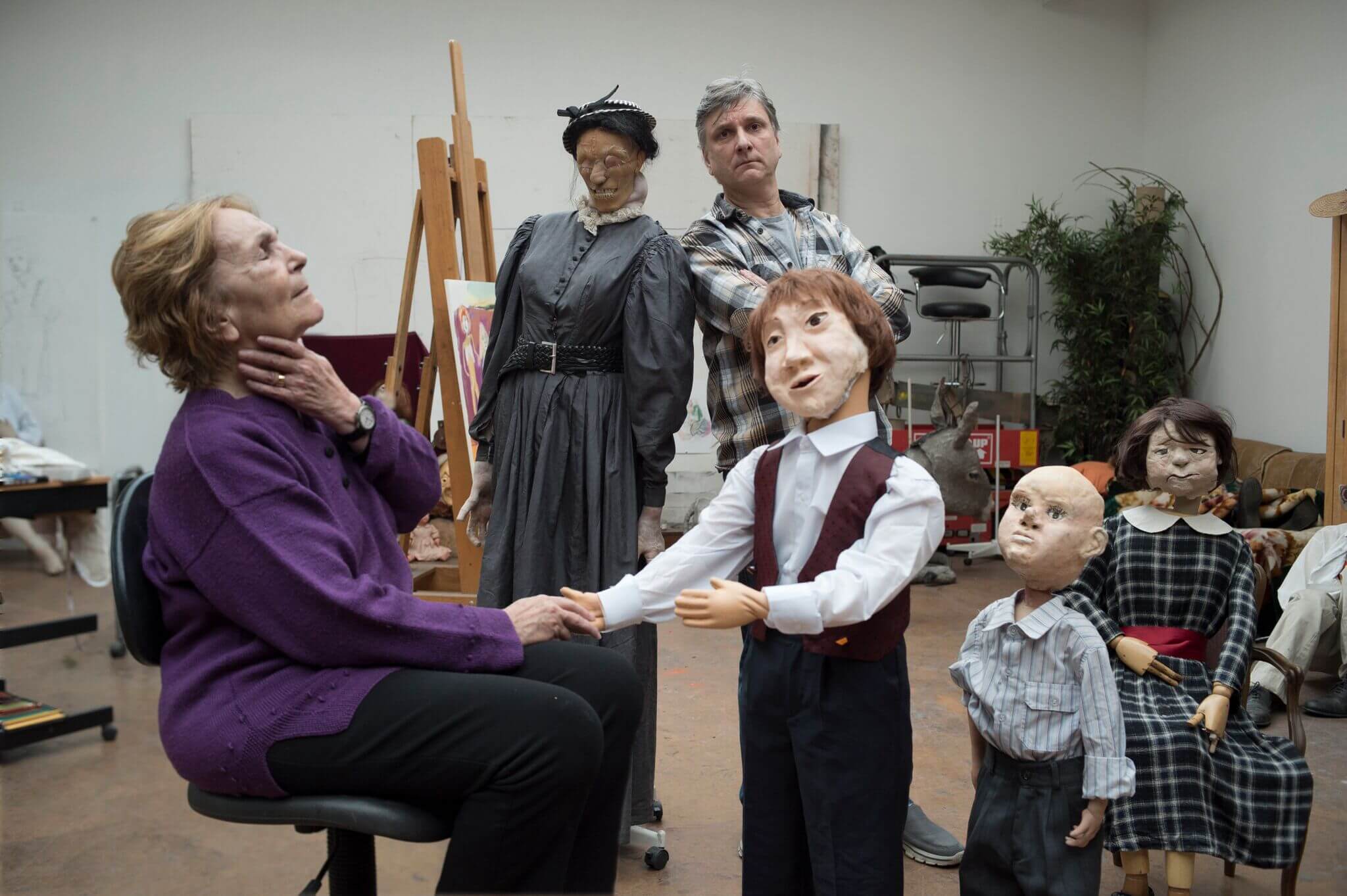 Indeed it was! My mother would say “draw me a picture of the bully – I want to know what he looks like.” And I’d get my revenge in the picture and send it to her. It didn’t stop the bullying, but it made me feel better. She may even still have those drawings.

Did any good come out of those experiences and or drawing the bullies over and over again?

I discovered Pinocchio. I couldn’t believe that drawings were moving and I had never seen anything so amazing. I locked myself in a room at school at the age of 16 and drew and drew.

Like you did in hospital when you were healing yourself?

Exactly. I wanted to film the drawings to make my own animated film.I was fired with excitement but I needed £230 in order to buy film. My parents were broke so couldn’t help me but when my grandmother won the pools, she gave me the money to make the film.

That’s quite an achievement for a 16 year old! 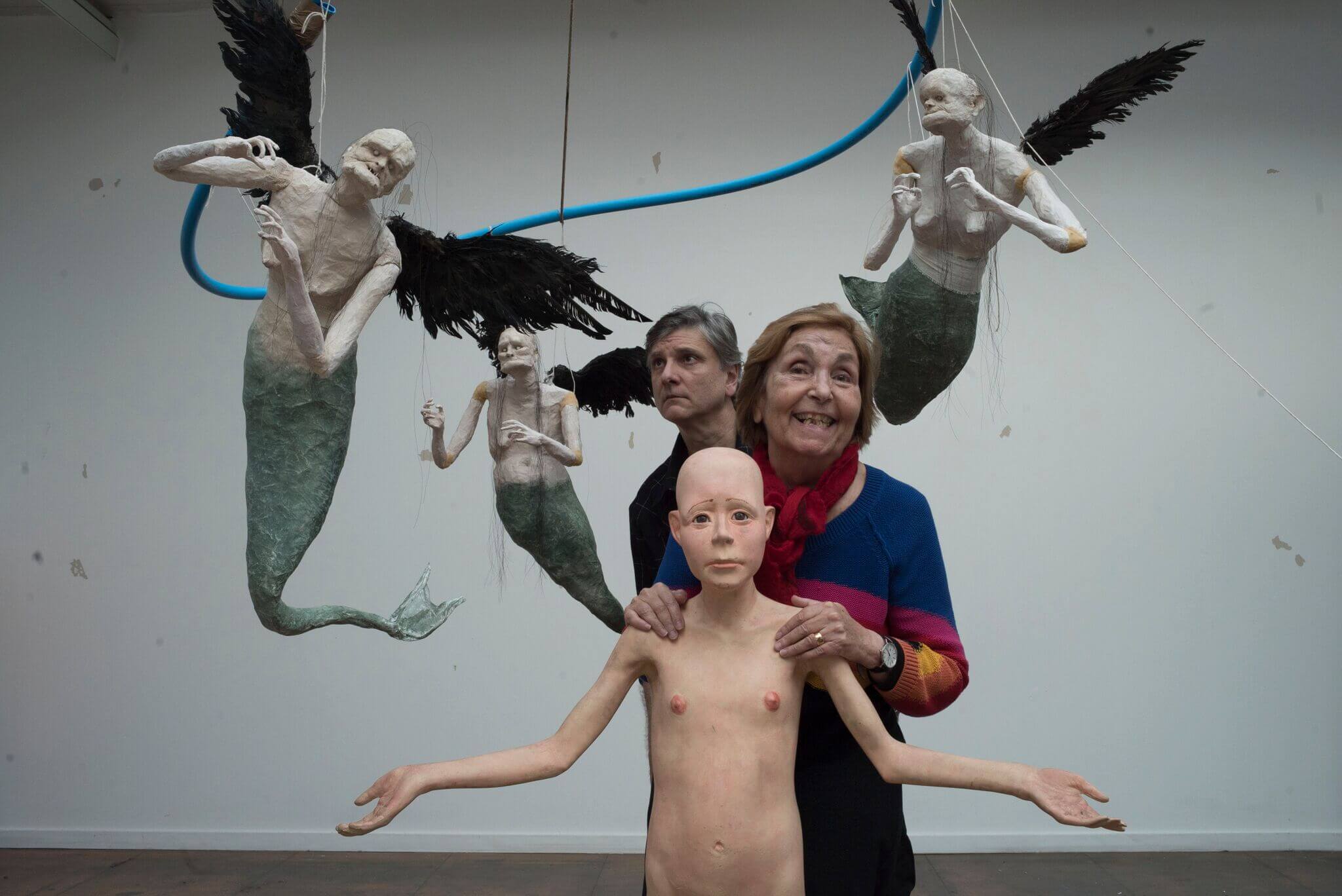 My mother always taught me that the most important thing in life is work. For her, it’s a blessing because she can express her innermost feelings but that obsessive need also means that she cannot be away from her studio for more than a few hours .She also becomes part of her work so it can also be a curse.

What happened to your film?

I got into the National Film School .

How old were you?

I was of 17 and all the other students were in their twenties. I started on a postgraduate course.

Which was the journey that brought you being a film maker, screenwriter, winner of 4 prime time Emmy’s as well as other critical successes and awards. And you have now become the documentary film maker to unlock your mother’s stories and secrets. 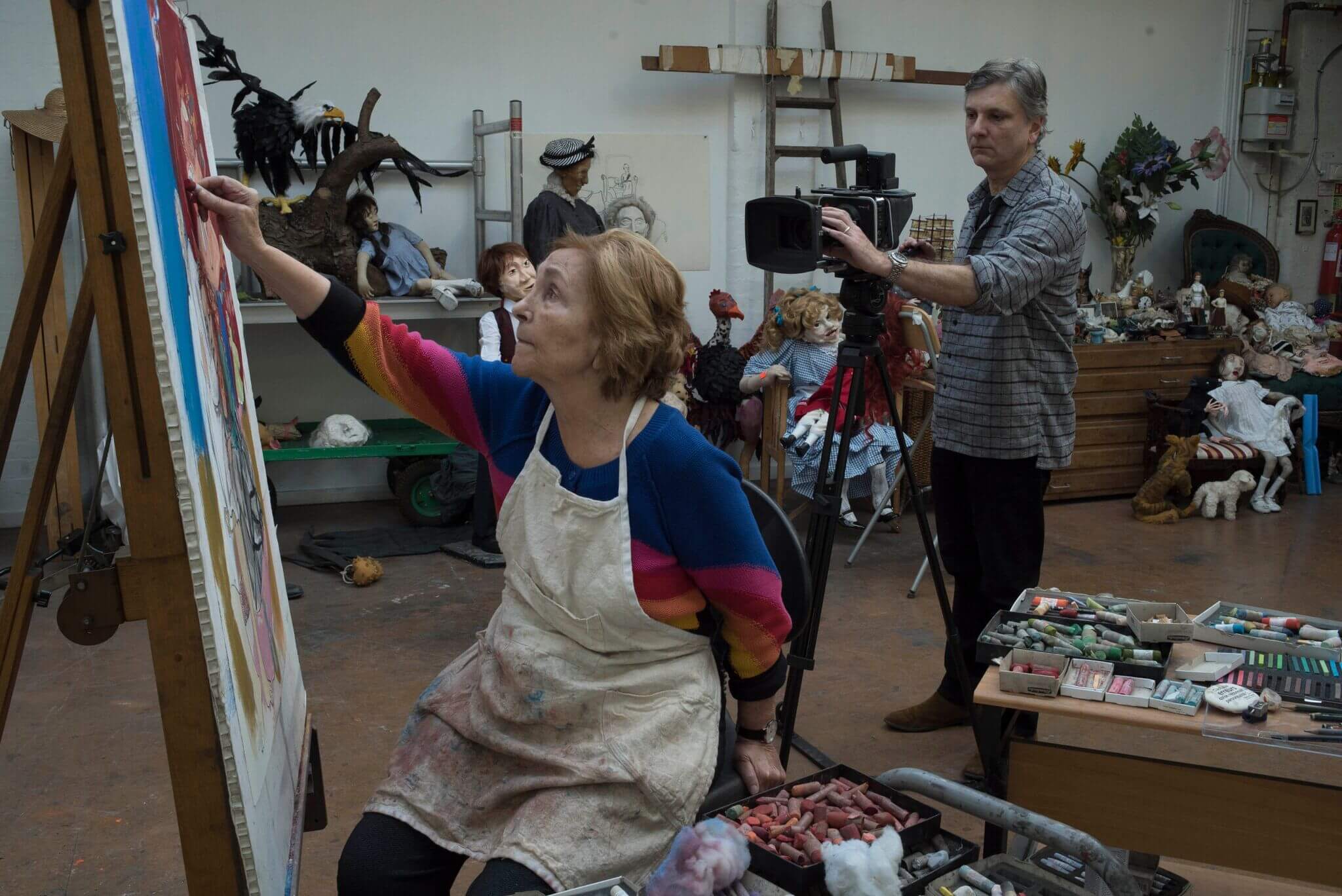 Yes, can you imagine the fear of screwing up a a film about your mum?

Did you out of affection for your mother, edit out anything in order to protect her?

I guess that is why this film is for me the most exciting documentary I have seen on an artist. I feel I know Paula , I can enter her pictures and understand her childlike imagination more fully through the film.There is an openness and innocence in her paintings which is reflected in the artist herself. No one has been able to get Paula to really open up before, in the documentary she is endearingly honest. 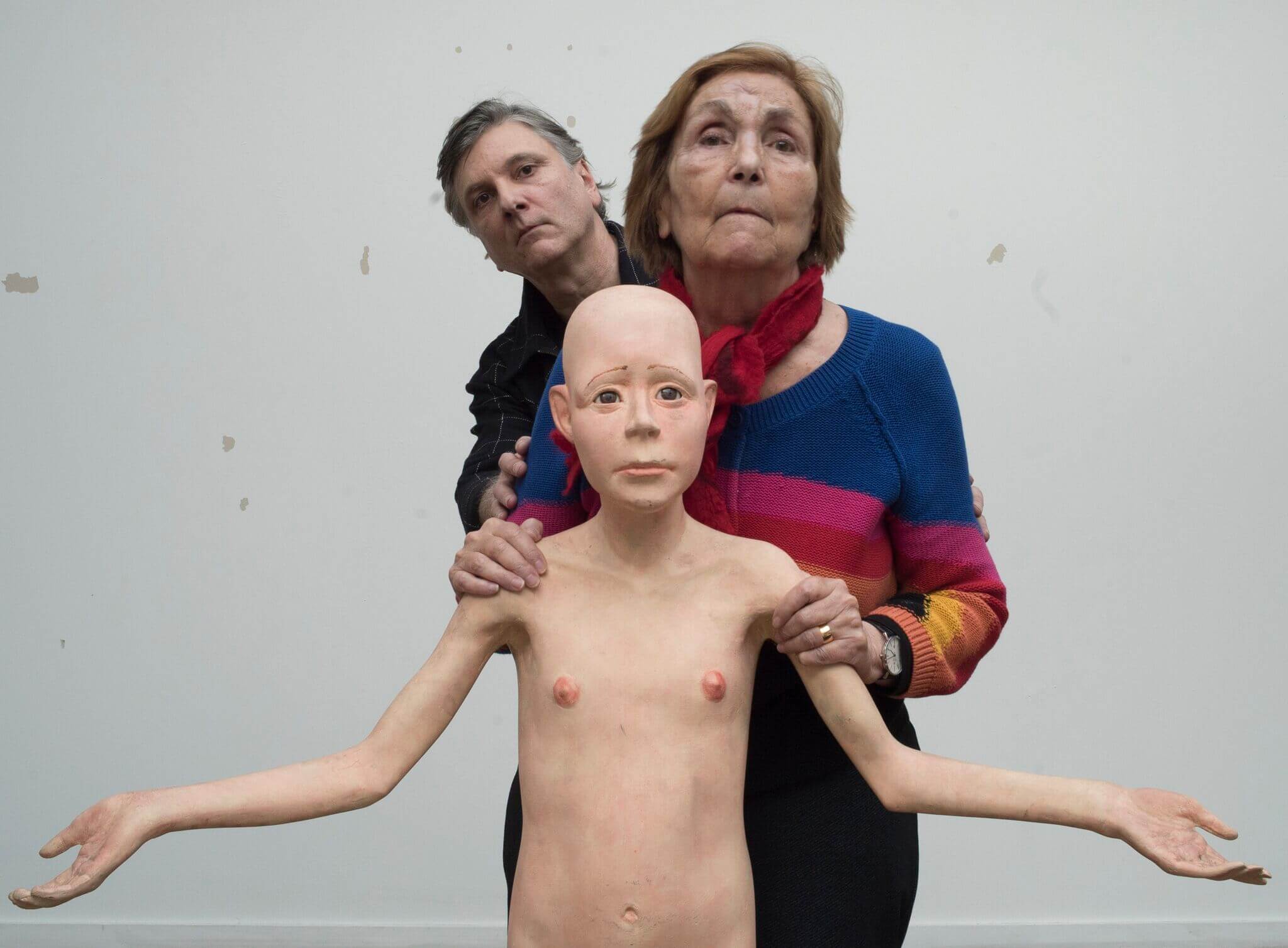 She is true to herself and childlike rather than childish. She doesn’t let the instruments of adulthood overwhelm her, she has the freedom of childhood…..

Wherein, I believe, lies the magic in her paintings.

Paula Rego is showing at the Marlborough Gallery March 13th-1st April. Works on paper. The Depression Series. 11 pastel works on paper created between 2006-2007.