It’s 3pm and I feel like I’ve accidentally stumbled into Zippo Circus. 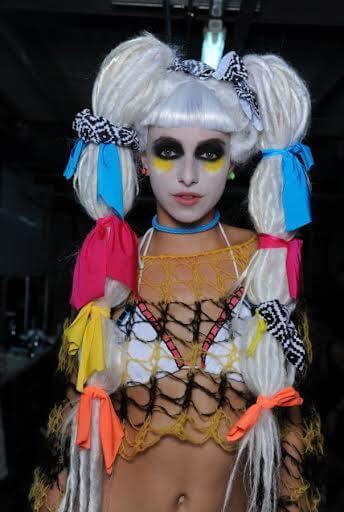 There are people everywhere taking photos, of people taking photos. It’s like I’m watching the world in fast forward; a place where 30,000 Lavazza espressos are drunk, 5,000 glasses of champagne and Mercedes Benz VIP Chauffeurs drive 32000 miles between shows. 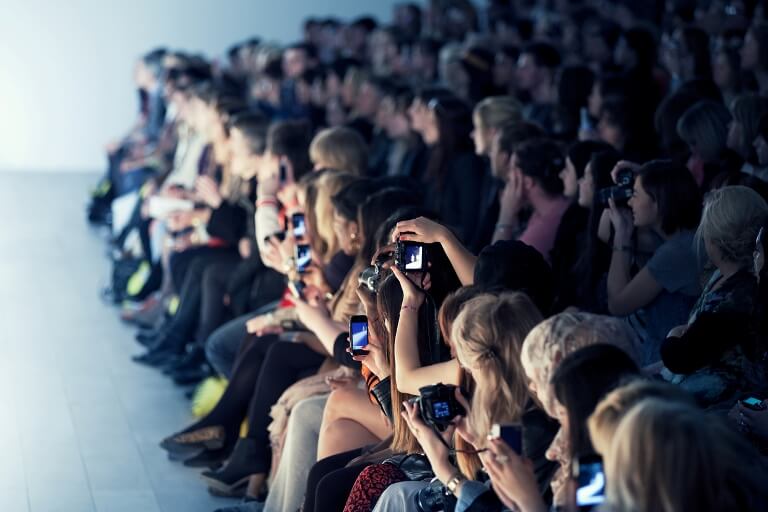 There’s a buzz around the courtyard about the just-revealed ‘selfie hat’ designed by Acer and attendees of London Fashion Week are keen to get their hands on one. The huge, hot-pink, glittery, sombrero-style hat has space for the Acer Iconia tablet and can spin 360 degrees, enabling users to take selfies from any angle. It’s what your sunhat was always missing, really. 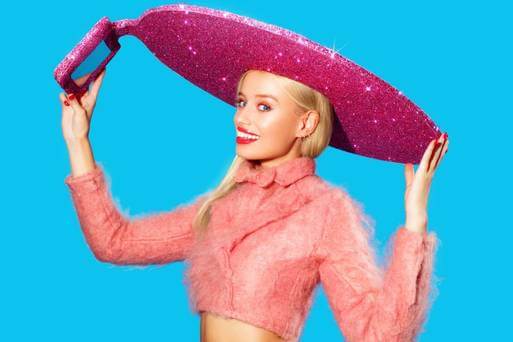 This is the year of the digital at London Fashion Week; SS15, the year that Twitter reveal a ‘Buy’ button which allows anyone to purchase the looks straight off the catwalk, and fashion greats like House of Holland team up with the likes of Facebook and Instagram.

“British designers pushing the boundaries of social and digital media to bring UK fashion to a wider audience” is what Caroline Rush, CEO of the BFC, calls it. And true; with 78% of guests saying they plan to tweet during the event, and research from Twitter showing that 94% of Twitter users admitting they are aware of the event, this £26 billion pound industry has suddenly made itself reachable, purchasable on a whole new level.

It’s not just the designers that are exploring the furthest reaches of social media. Somerset House is like a stage set for selfies; we’re here to ‘expose’ ourselves, and brands know it. Everywhere you look, brands are pleading with us to publicise – or more harmlessly called ‘share’. There are Swatch booths dedicated to taking selfies, mirrored Addison Lee cars designed to take a photo against it, and even some poor old representative from Go Pro asking people to use a camera on a stick to snap themselves. You could cut the insecurity with a knife. 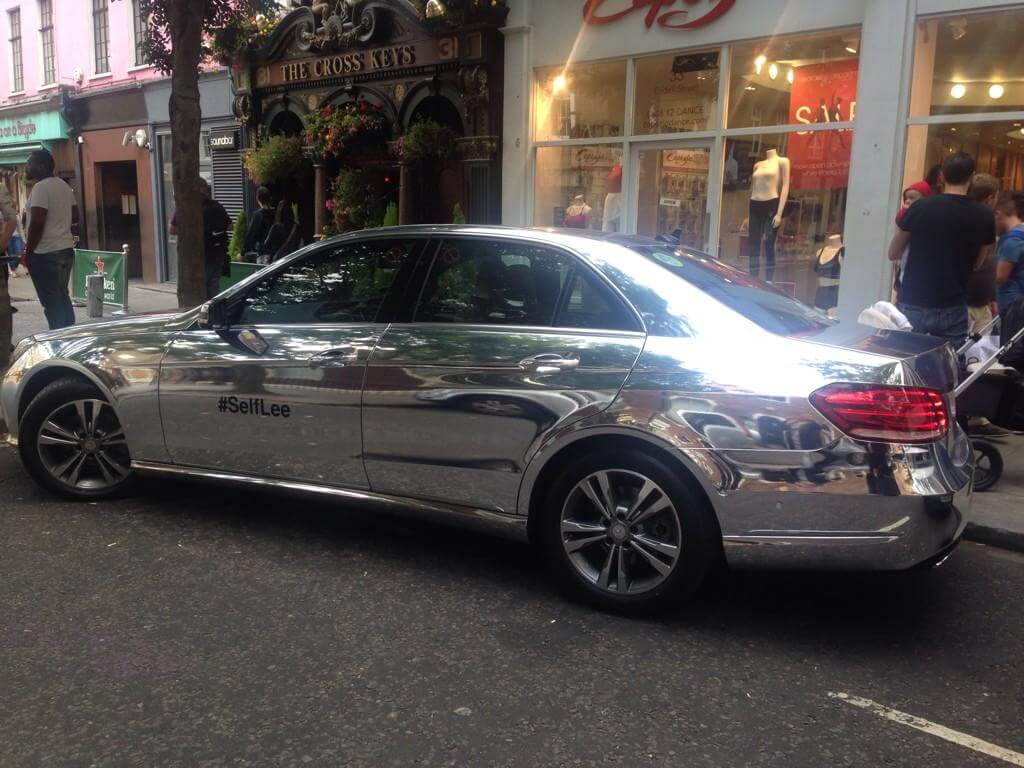 Do we really need to be incentivised? Last year, there were over 300,000 mentions of #LFW on Twitter over 5 days, and nearly 100,000 images tagged #LFW on Instagram. This added up to 3000 phones needing to be charged on the front row by Vodafone. All that buzz is fuelling the prestige of the event, the exclusivity, the drama. 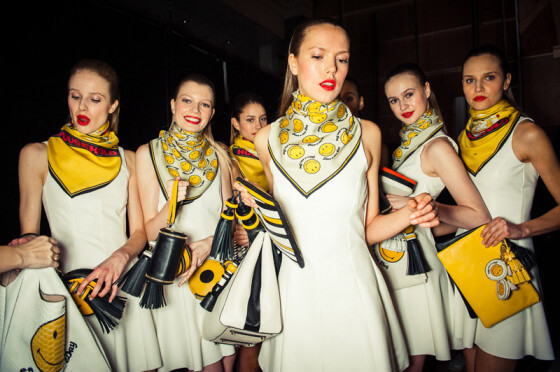 I’m a digital journalist who crowned the Foot Selfie, why don’t I feel happy here? Because I feel oddly exposed, like I’ve walked out of the house in my PJs. The everyday simply will not do; you have to be dressed fantastically, other worldly. It’s like scrolling through images of #Fitspo on Instagram; after a while, you just feel worse. 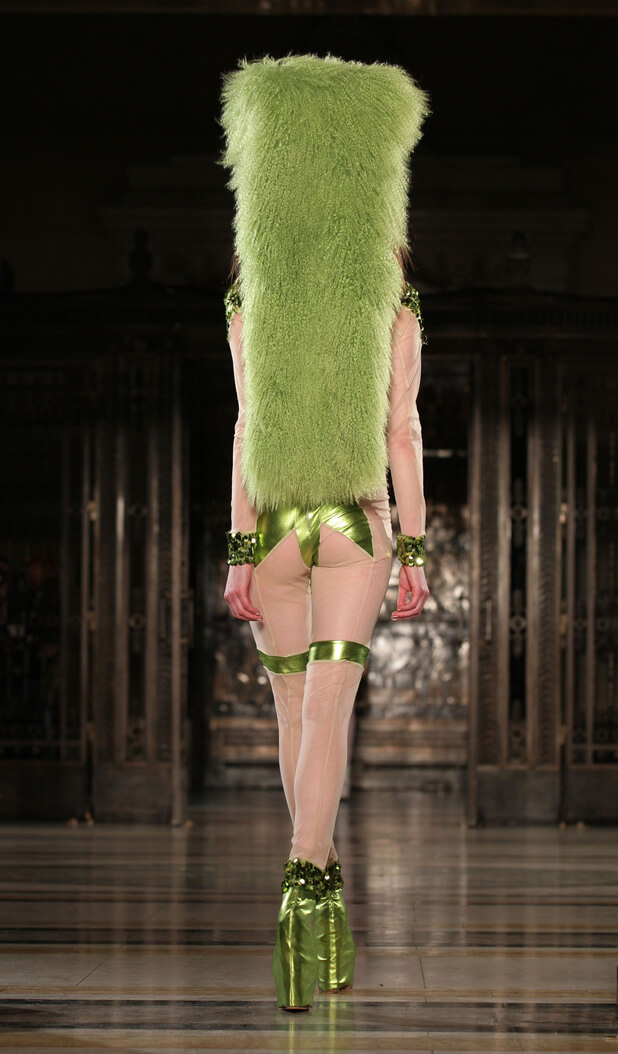 There is a pressure in appearance than takes away from the joy of the event; it’s the reason journalists ‘borrow’ clothes for the week, and totter around in shoes too small for them. The jeans and a skinny white tee combo that has served me perfectly well all my adult life makes me feel boring. Drab. Dull. I haven’t got a fascinator on my head, or rainbow colours in my hair, or a bull ring through my nose. I would have been better off leaving the house in my unicorn onesie. 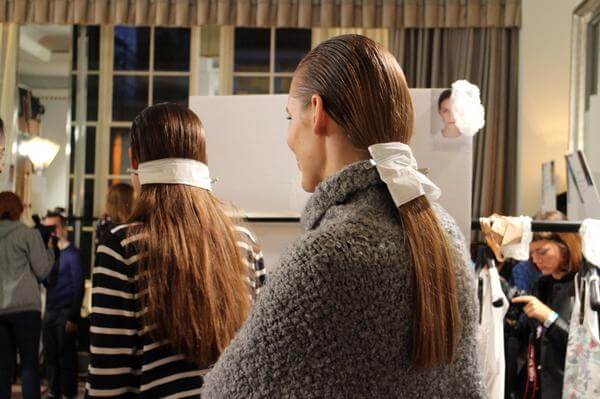 And the insecurity I’m allowing myself to feel is only a touch of something I have sensed from the start. Because this year I’ve seen it from the other side, outside the shows. Running my own magazine for the first time, I’ve been alarmed by the growing demand both on social and in search volume for low-fat recipes, diet fixes and even juice cleanses. This week, I saw the words ‘can I live off carrots’ Googled. It’s time to step in. 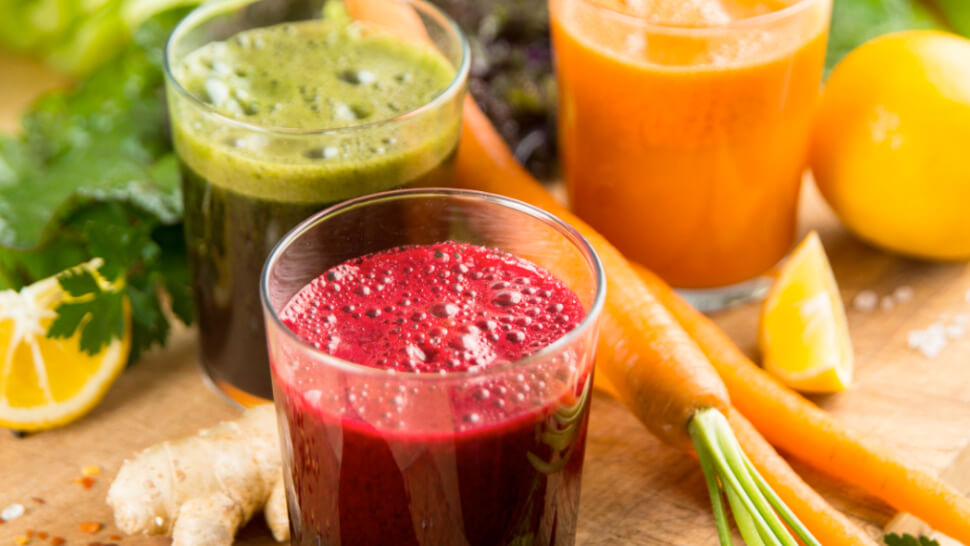 Why is this happening? It’s because this London Fashion Week is more public, more social than ever. Readers are showing an emotional response to the photos of undersized and body beautiful all over social media; suddenly, our feeds are clogged up with hip bones and thigh gaps. Imagine, for a moment, the consequence of the partnership between House of Holland and Metail which allows consumers able to try on and buy clothes in real time via a digital avatar. It means you can feel insecure about your body both in the dressing room AND the internet. Brilliant. 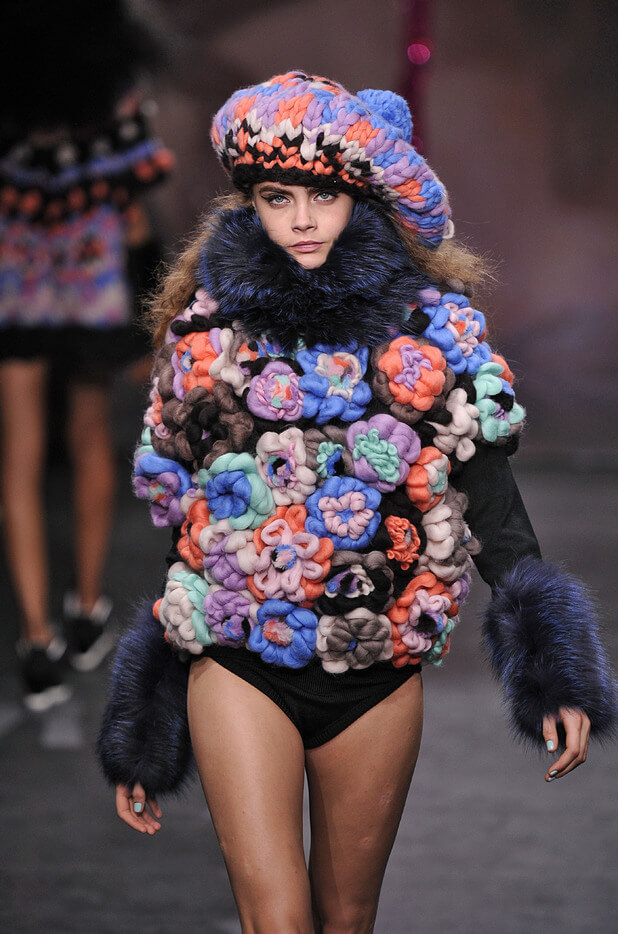 We cannot be brazen about promoting undersized women and diet trends. It’s the job of media outlets to provide a balanced and realistic view of the event, not get sucked into a fashion frenzy. We’ve seen it with #Fitspo, #EatClean and #GuiltFree: social media trends are damaging to women, and any publication that profits in fuelling women’s insecurities are more shameful than builders who cat-call on the street. The concept that we need to diet at this time only feeds anorexia, disordered eating and anxiety. There’s a dark underbelly to this fashion world; one that leaves its mark not on the attendees, but those absorbing through a screen. 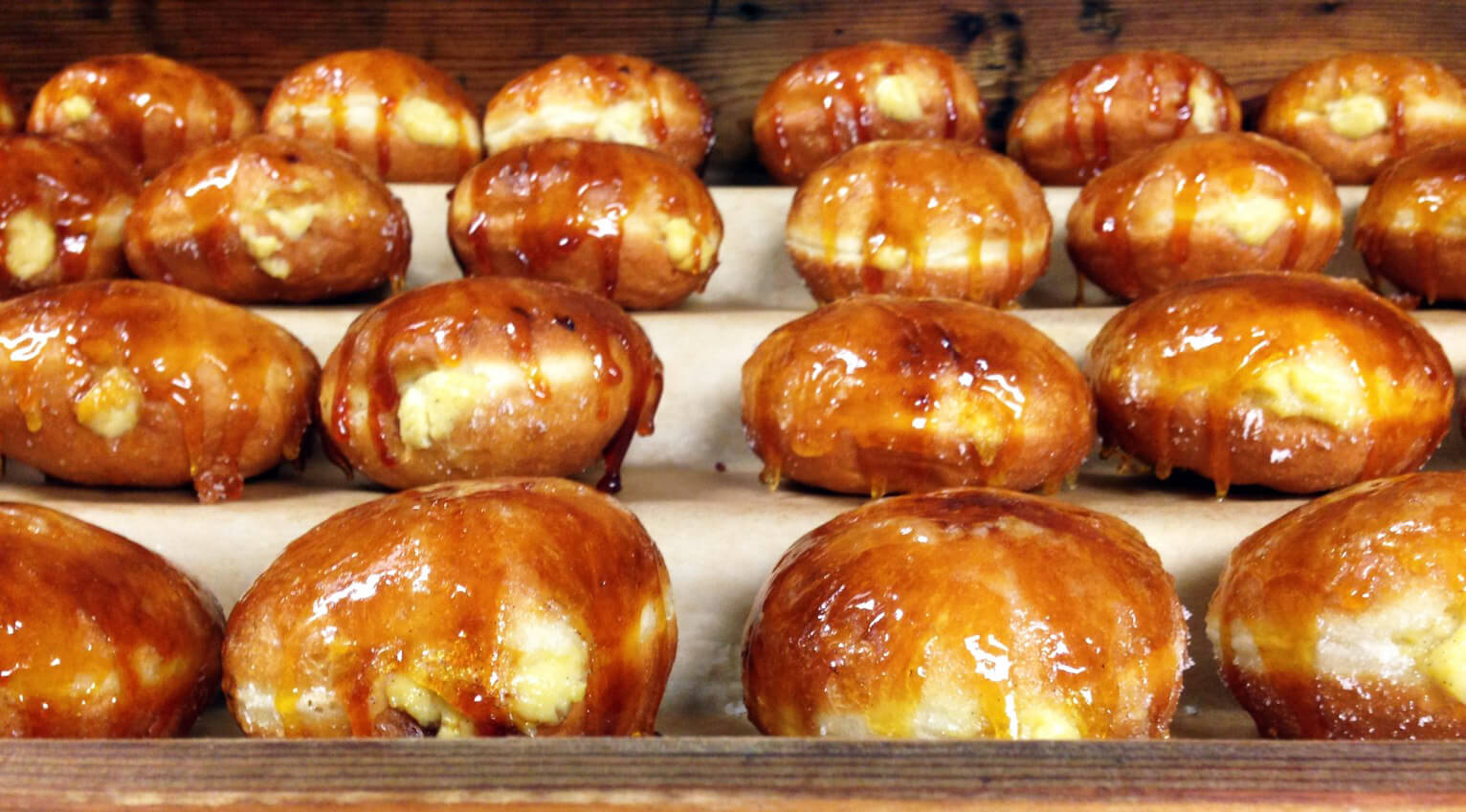 The selfies, the social, the press, is all pushing towards a heightened awareness of our own bodies; my Food Editor has spent the last 3 weeks battling ‘what to eat during London Fashion Week’ press releases that insist we sell our readers Skinny Sliders (where the bread is replaced with lettuce – which, of course, is not a burger but an edible identity complex), low-calorie cocktails and bite-sized dinners. And we’re talking about young, impressionable young girls who read COSMO and ELLE. In response, we had no choice but to create a guide on how to eat all the carbs this London Fashion Week.

It’s a whole new world. The ability to buy items directly from someone else’s characters on Twitter creates an ever-growing social pressure to look, dress and act perfect. There’s a power of in this digital advancement; suddenly celebrities and those with high social followings have the ability to affect millions of people across the web. 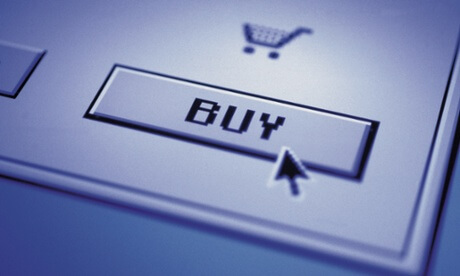 We must be careful with that power. There’s more to Fashion Week than selfies; there’s art and colour, but there’s a sadness too, with young girls loitering hoping to get photographed, and a huge pressure to be part of the ‘scene’ even though no-one is quite sure what that is. One blogger admitted he’d taken 50 photos of himself in the last 2 days. Is this making us happy? 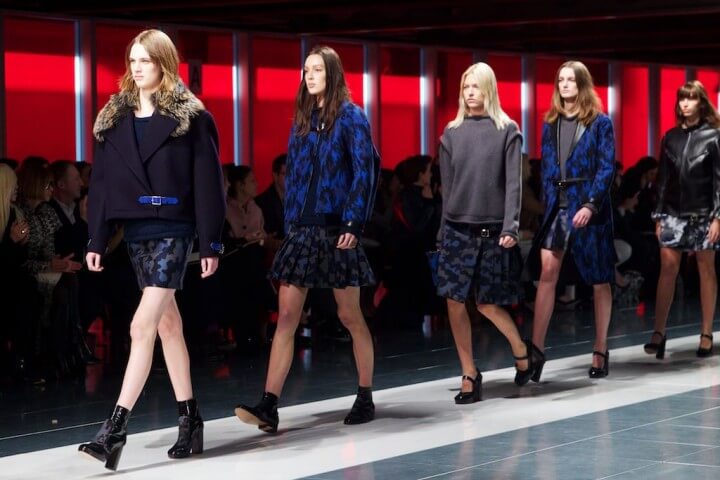 It’s time to remember that a picture speaks a thousand words, and, now, can sell a thousand dresses. If I was were Boris, I would probably ID on the door of Somerset House. But we can start with being a bit more careful about what, and how, we conduct ourselves on the web.

A selfie is so much more than just a picture. It’s a picture of mankind. Of the state of things. Of our own happiness and our future wellbeing. And it’s about time we realised that.