Travel / Destinations / To The World’s Most Secluded Beaches

To The World’s Most Secluded BeachesBy Natasha Culzac

Pleasure is peeling off your clothes and forgetting about them on the empty shoreline of a private beach before running into the shallow, vacant surf. Fact. Forget jostling for a space on a packed, pulsating hot beach, almost tripping up over the sprawling shelters and toddlers snaking around your ankles – if you’re one to treasure basking uninterrupted in the sun’s rays, then these incredible and indulgent resorts with private beaches are just for you. Sit back, relax and admire a vista of rippling waves, with not a human to blemish the view. 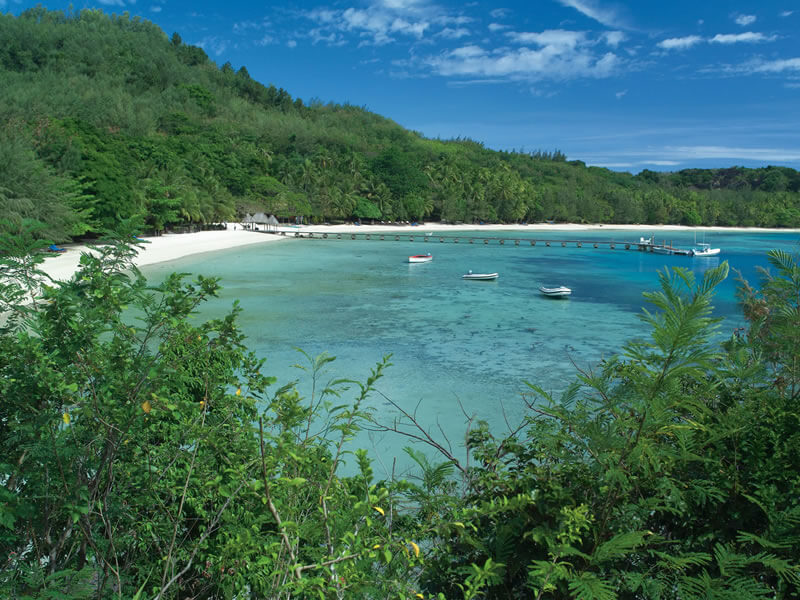 There are no less than 14 beaches on this privately owned island hideaway , belonging to the eponymous Turtle Island Resort. Huddled within the Yasawa group of islands, Turtle Island’s previous name, Nanuya Levu, was changed upon its sale in 1972.

Its 500 acres of land were then turned into a luxurious South Pacific destination and its limited beach bure accommodation (individual Fijian huts) means that only 14 couples can stay at any given time. Its revered Blue Lagoon (pictured) is the perfect spot for snorkelling the living coral reefs, where you might spy some  butterfly fish and hawksbill turtles.

The Dionysos Estate in Turkey 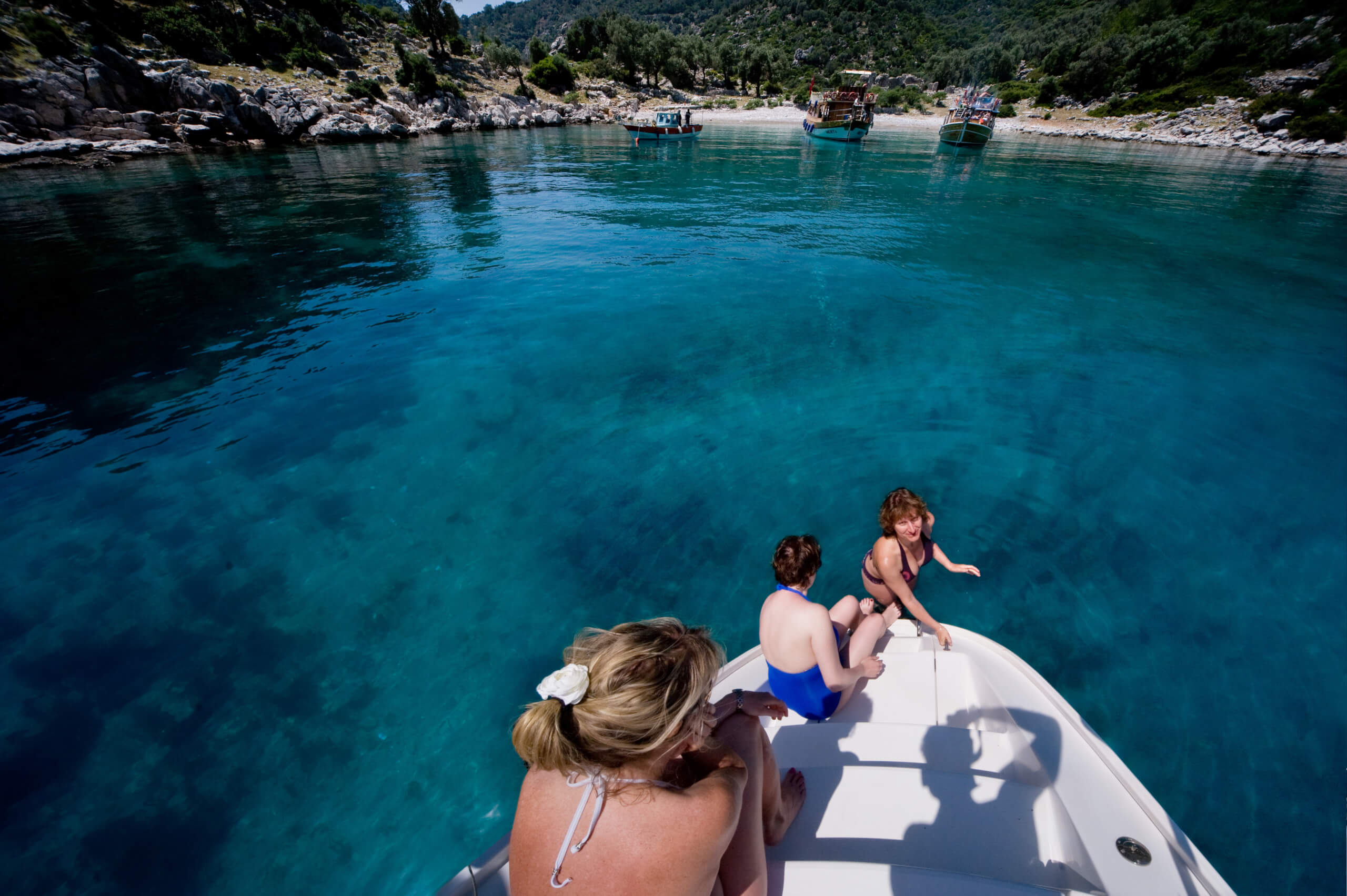 The private beach club of Turkey’s boutique hotel The Dionysos Estate provides its guests with some welcome idyllic seclusion. Jutting out into the Aegean Sea on the south-west tip of the country, the contemporary hotel is perched atop a stunning canyon allowing for 360 degree views across the Bay of Kumlubük.

Surrounded by far-reaching mountains, the beach club and its romantic waterfront restaurant are the  perfect place to hide with a cocktail, or try out some waterskiing – there’s no one else here to see you embarrass yourself. The sand is raked daily and there is a complimentary shuttle service to get from the hotel and back – should you not fancy the 25-minute walk back up the hill.

Necker may be an oldie but it’s still a goodie – and more importantly it’s Richard Branson’s very own Caribbean bolthole. What’s good enough for Richard is certainly good enough for us. Part of the 74-acre private island may have almost been wiped out by a house fire in 2011, but it’s now back on track – the resort even recently announced that it’s going to stop using 100% diesel power and instead use a mixture of wind and solar in order to reduce its carbon footprint.

Its unspoilt stretches of sand include the Main Beach – where the sailing, kayaking and even an underwater trampoline are situated – in addition to the quieter, hammock-strewn Turtle Beach and various other tiny isolated spots. Unfortunately Necker, with its nine bedrooms in the Great House and six Balinese outhouses, is normally rented out as a whole entity- not for couples wanting just one room. 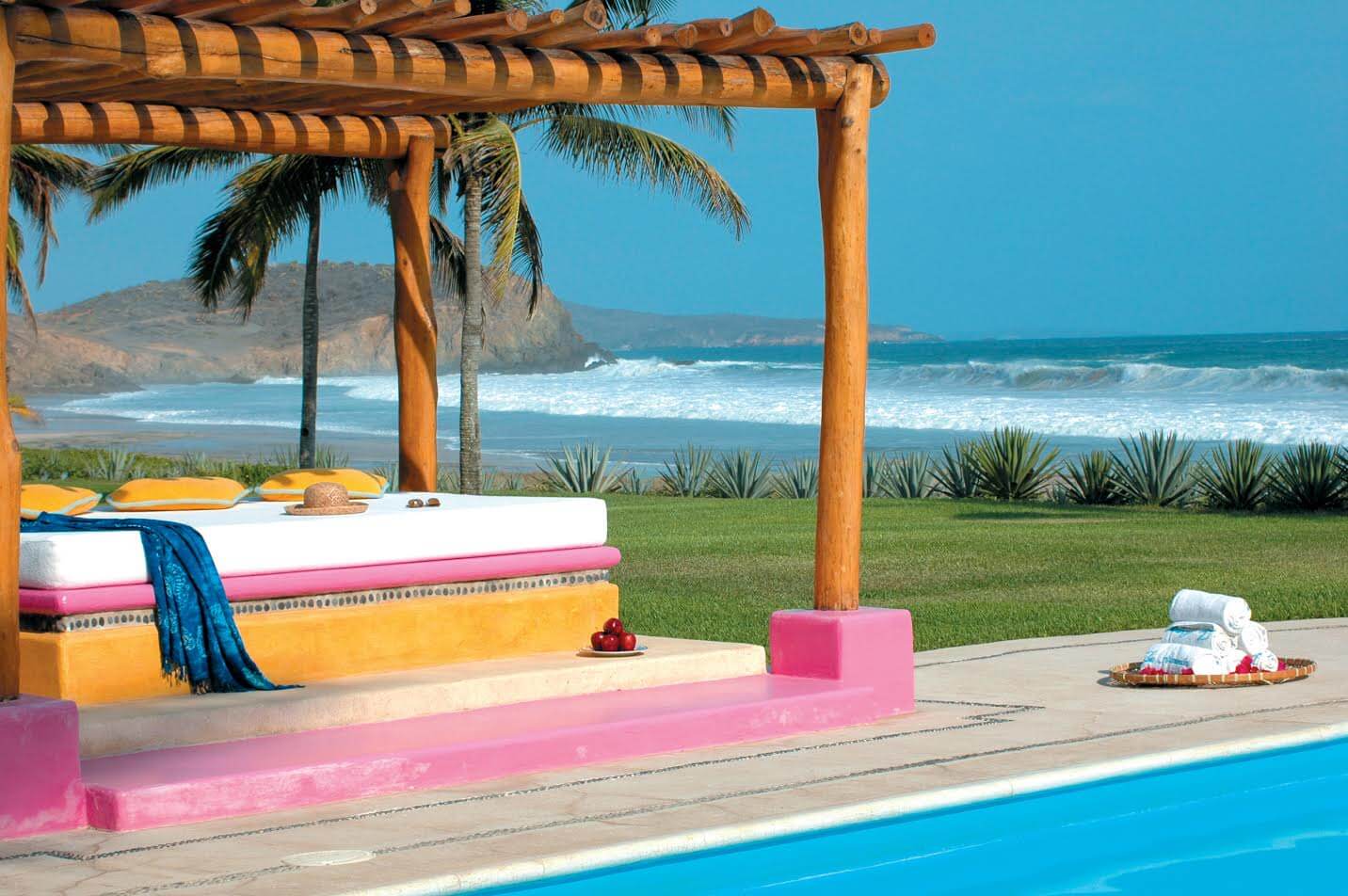 Many travellers to Mexico gravitate towards its eastern coast, with its non-stop party towns of Cancun and Playa del Carmen – both of which light up the Yucatán and fringe incredible Mayan ruins and cenotes. Though the waters on the west coast are sometimes considered lower quality than those on the east, the Pacific Ocean resorts give the Atlantic ones a run for their money – and they’re not as rammed with tourists either. The Costalegre, a 57-mile stretch of beach just south of Puerto Vallarta, is bountiful in vegetation, tropical forest and virgin beaches.

Situated along the Costalegra Coast among nearby colourful villages is the beautiful 16-suite Las Alamandas resort. It has four private beaches – the largest is Chachalacas at 1,500m long – with one directly outside of the resort.

Become a cowboy for the afternoon and gallivant along the water’s edge on horseback, or watch a mariachi band with margarita in hand from underneath a thatched palapa shelter – a cosy, cushion-lined beach hut for the day and night.

Also part of the Virgin Islands archipelago is the rather large Peter Island, which tells its guests: ‘What beach you choose will likely be the most difficult decision you make every day.’ There are five beaches belonging to the Peter Island Resort and each one is as immaculate as the next.

A jogging trail, if you’re so inclined, leads to the glistening azure waters of the Big Reef Bay and Beach – conveniently located next to the spa. Elsewhere White Bay Beach is a firm guest favourite, where a private picnic in a tiki hut precedes first-class snorkelling and sea turtle watching, while the Honeymoon Beach can be booked out in slots per couple.

Don’t expect to hear the chugging of speed boats or smell diesel fumes on the shore front either – all water activities are non-motorised. Holidaymakers can then toast the sunset with a glass of wine before tucking into some Caribbean fare – all while listening to the steel band (who perform on Wednesday nights and Sunday afternoons). 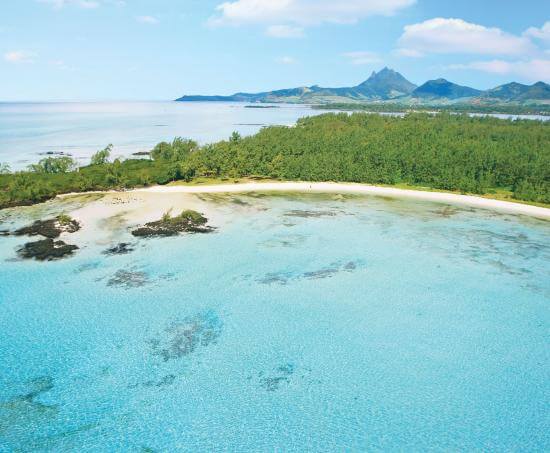 On the east coast of honeymooners’ favourite Mauritius, the luxurious Anahita Resort is perfectly plonked right next to a crystalline lagoon and directly opposite another smaller island called Ile-aux-Cerfs. Half of the resort’s 70 serviced suites have sea views, while 28 larger villas with three, four or five bedrooms with their own private swimming pools provide an extra level of decadence.

Parts of the adjacent Ile-aux-Cerfs island are open for public use; however, the eastern side of this tiny isle has just been bought for the exclusive use of Anahita guests. The resort has only recently opened this private section of beach, providing a boat shuttle service back and forth from Anahita’s own quayside. The new private beach has a small bar, and is fully serviced – perfect for an extra-special romantic dinner.