Travel / Destinations / Short-Haul / About Time: You Went on a Yoga Retreat to Le Grand Bellevue, Gstaad

About Time: You Went on a Yoga Retreat to Le Grand Bellevue, GstaadBy Alicia Grimshaw

Yoga has been spreading across London’s active scene like some kind of fitness rash. You either like it, or you’re not a fan. Sure, the idea of yin yoga floats our boat – it’s essentially napping in a room with a load of strangers. But taking the plunge and tipping your toe into yoga can be daunting; lack of mobility, not vibing on the motivational quotes, and complaining you’re about as flexible as a wooden worktop (read:us), are excuses for not taking up this physical activity. However, we’ve found the answer: if you’re a yoga newbie, or a downward dog devotee it’s about time you went on a yoga retreat to Le Grand Bellevue in super-swish, Gstaad Switzerland. Here’s what you need to know: 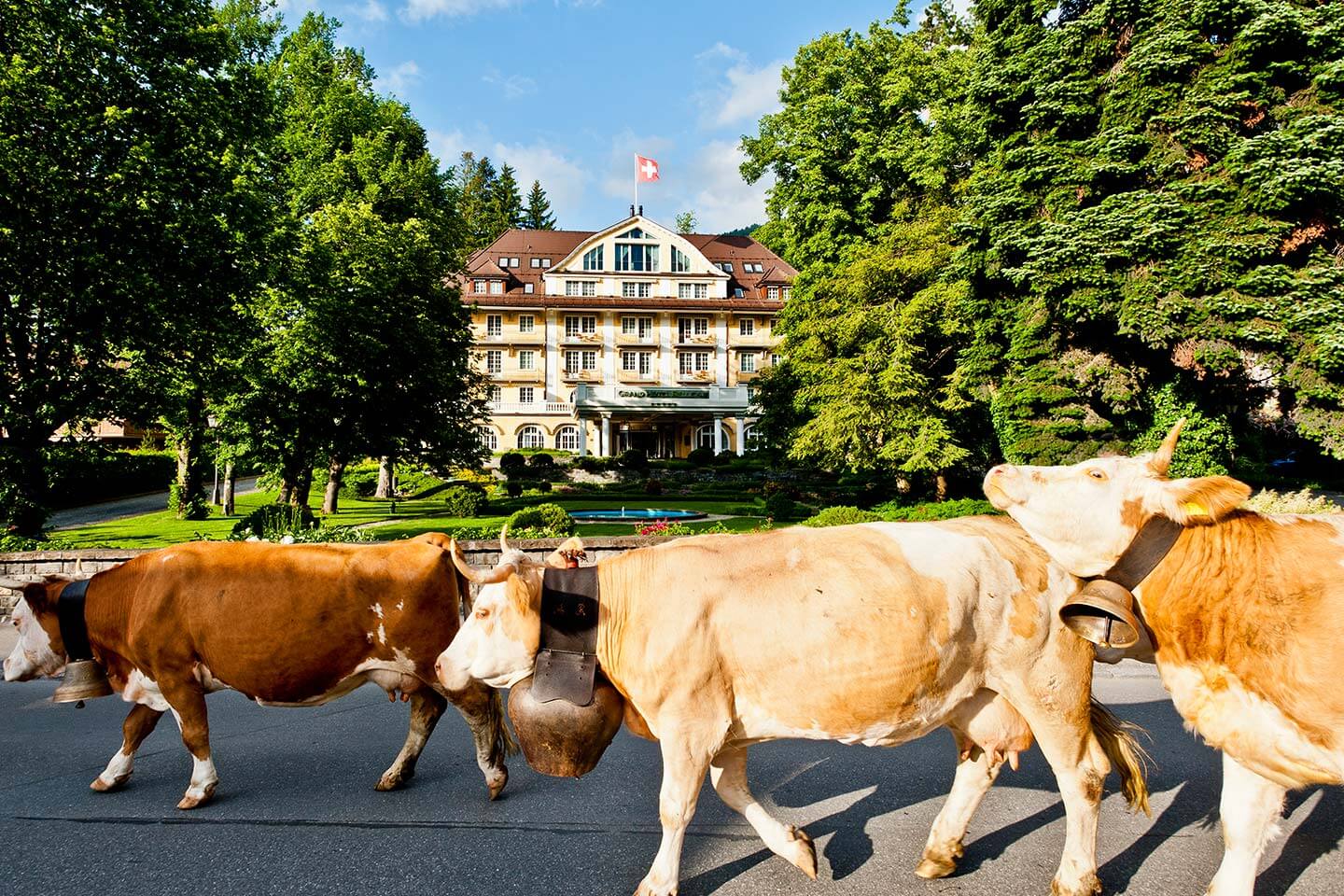 Thanks to Swiss Air, you can catch a short flight from London City Airport and arrive in Geneva in under 1h 30min. From here, board the 3 hour train which leads you through quaint Swiss hamlets, past toy-town villages and snow drenched mountains to Gstaad, a upscale resort town in the Bernese Oberland region of the Swiss Alps. In winter, Gstaad becomes a hotbed for celebrities who don their finest ski gear and hit the slopes. However Gstaad is not just a wintery destination. Come summer, the snowy mountains are covered in lush greenery, and the sun-dappled hills are perfect for leisurely hikes. And there’s no better place to rest your head and take part in a few warrior poses than Le Grand Bellevue. 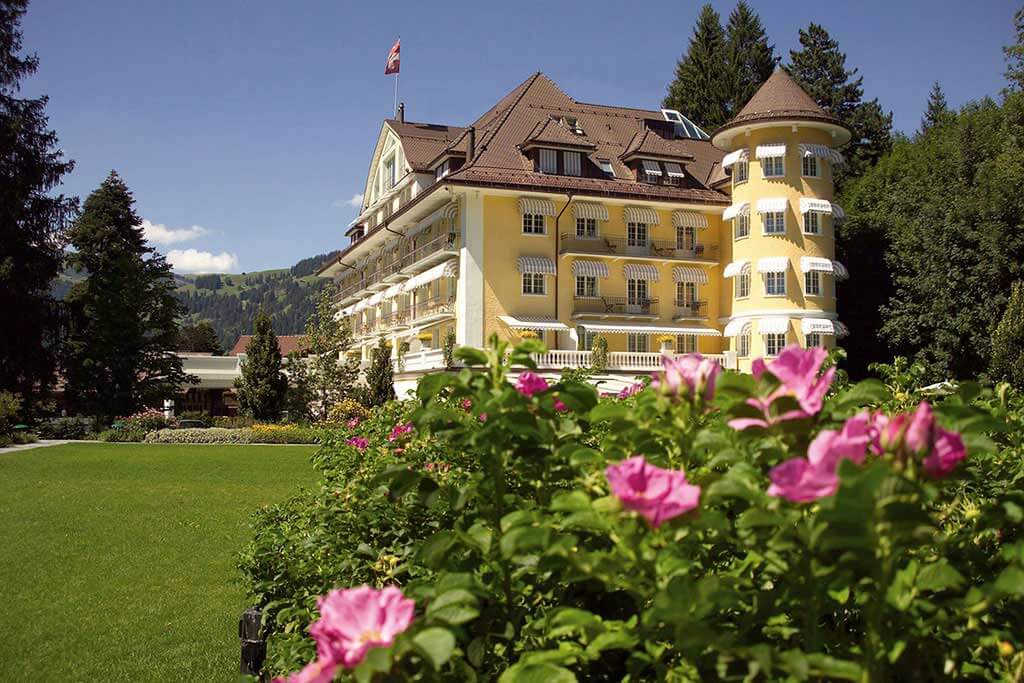 The luxury bolthole nestled in the Swiss Alps is ideally placed for exploring the great outdoors, and the surrounding mountain range. Le Grand Bellevue is owned by Swiss couple, Daniel and Davia Koetser. The hotel holds particular significance to Daniel; his wife, who designed its stunning interiors, he met on its very lawns, and they spent the first night of their honeymoon in this hotel. When it came onto the market, they felt they ‘had’ to buy it – a year later, a brand new hotel opened. 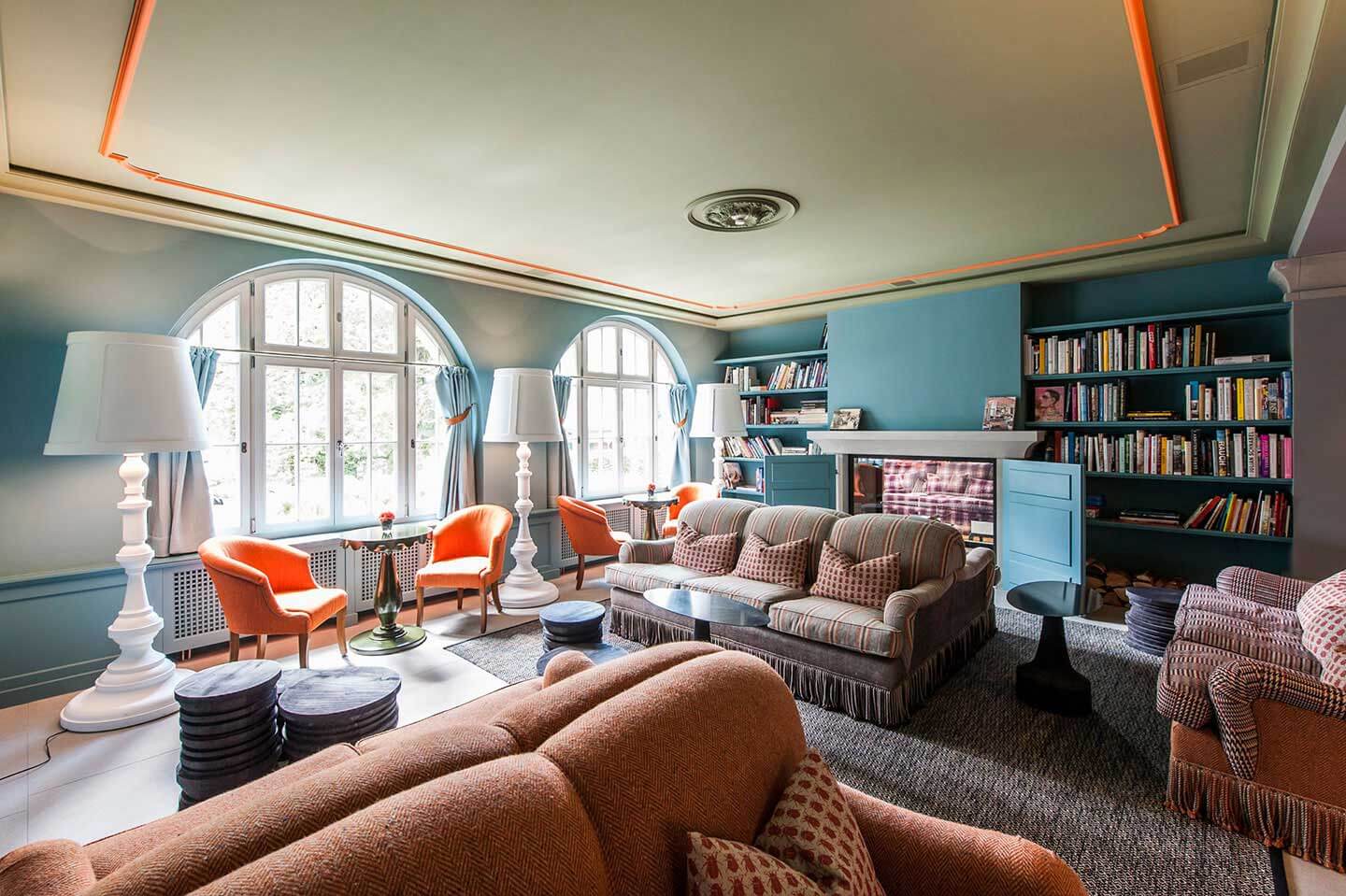 Le Grand Bellevue is unlike any hotel in the Gstaad area. In 2013 the hotel reopened after an extensive refurbishment with incredible decor and a fresh personality to match. The furnishing are traditional with playful touches – you can easily spend hours hanging out in various corners, whether that’s enjoying hot chocolate by the fire, reading a book on one of the many window seats, or lapping up the rays on the outdoor patio. 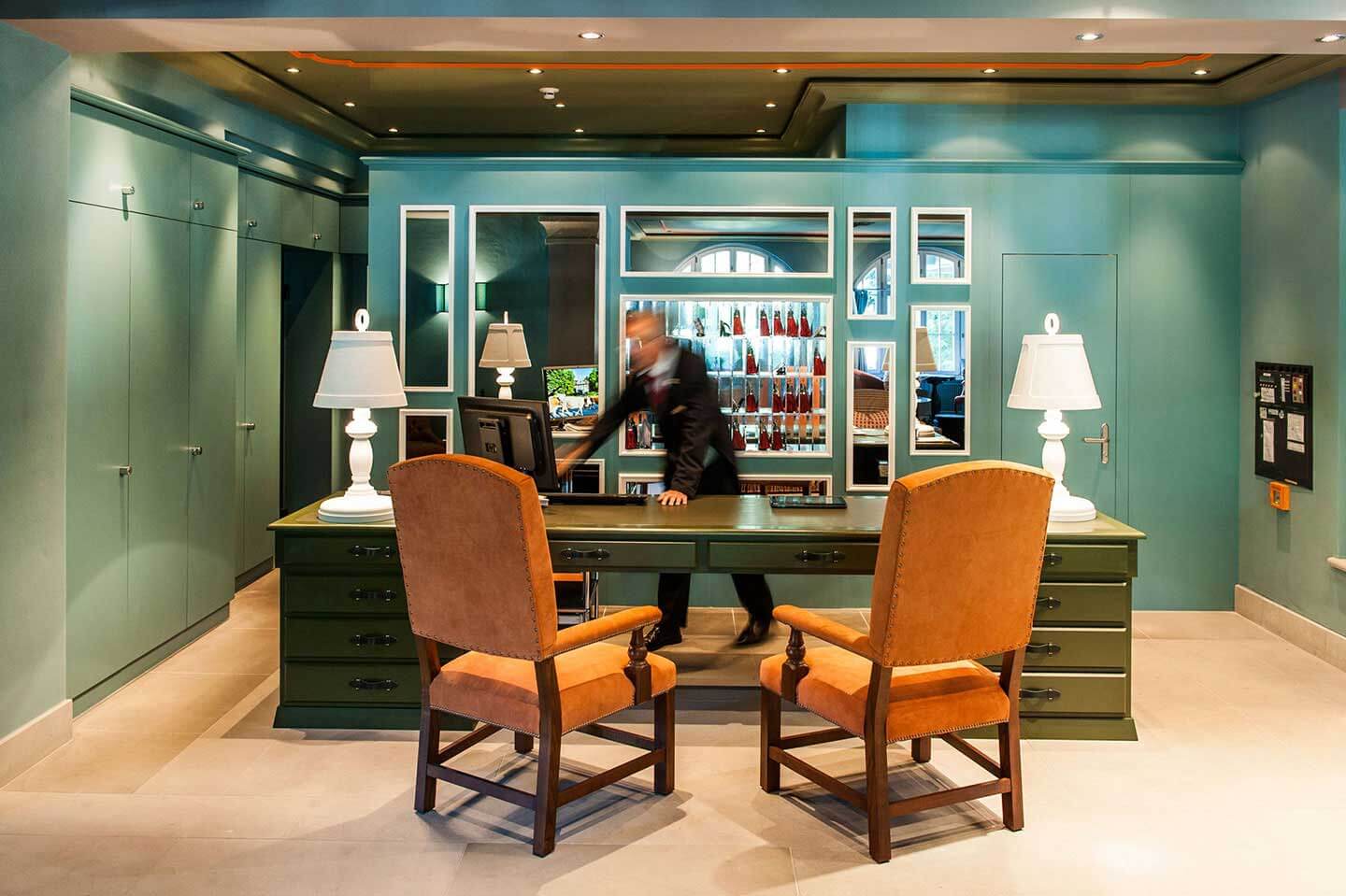 There’s a keen eye for design – House of Hackney wallpaper covers the downstairs areas, quirky art festoon the walls, and there’s a tweed covered life-sized camel in reception. If the Ham Yard Hotel and Soho House ever have a love child, Le Grand Bellevue would be it. 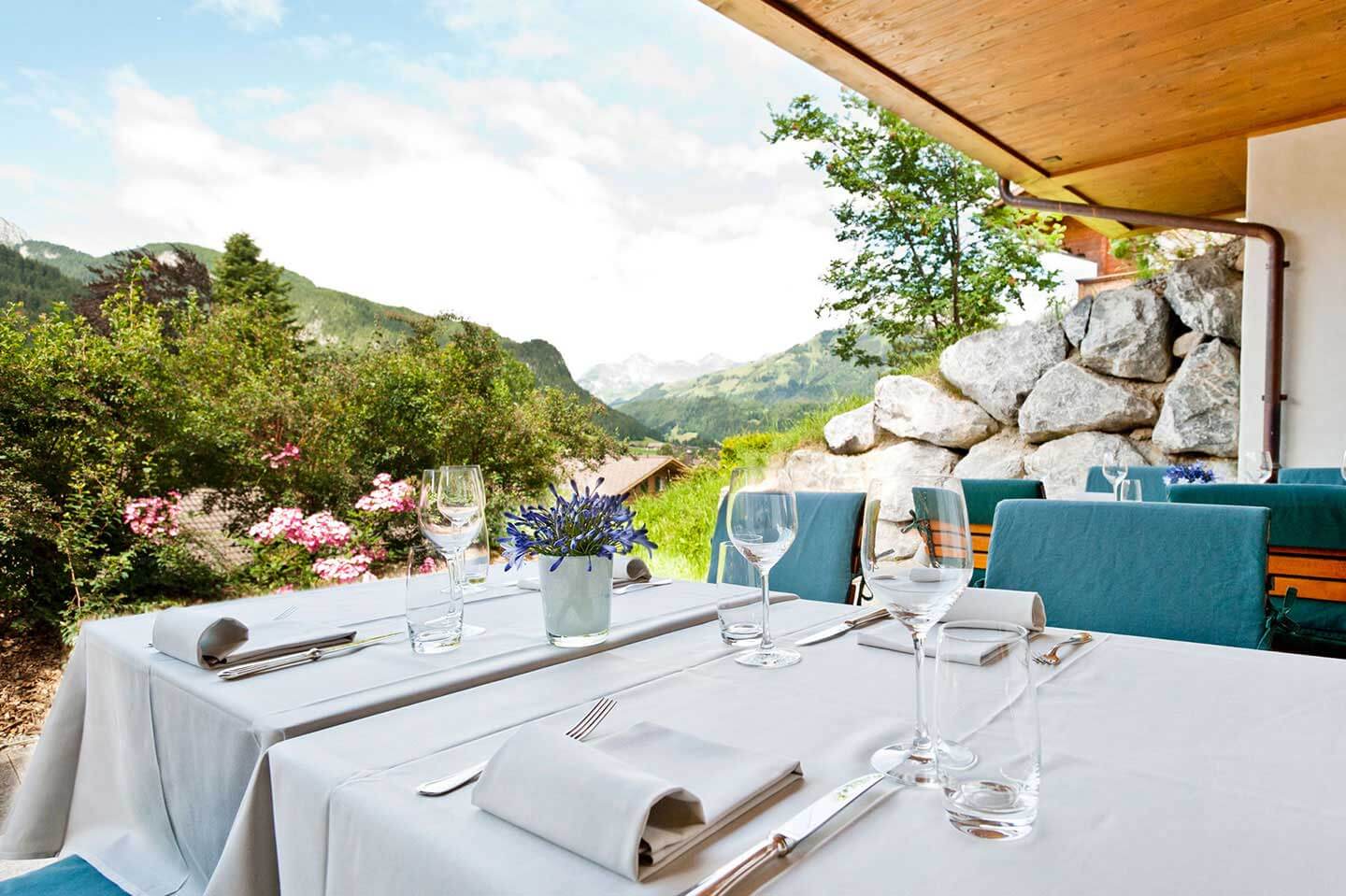 The yoga retreat is different to many yoga getaways. Daniel remarks that ‘it doesn’t take itself too seriously’, and if that means having a glass of wine at dinner, then so be it. There’s no gongs, no chanting, and no cringeworthy motivational lines that seem to frequent London studios.  Chantal Soeters, a yoga teacher and holistic coach aims to help you slow down, switch off and connect with yourself. The three day yoga retreat features a variety of different yoga classes – from the more upbeat vinyasa to the downtempo yin class which focuses on breathing, and relieving stuck energy.

This yoga retreat is about challenging yourself, breaking out of your comfort zone and trying something new. There’s a real effort to make sure that everyone has the chance to unplug in order to recharge. Chantal has ten years of experience and can help with body alignment, and for yoga beginners who need a little more TLC. It’s a great retreat for advanced yogis to push themselves and for newbies who want to try something new.

And the retreat is not just limited to within the hotel. A particular highlight of the yoga retreat is a hike up the Swiss mountains, and a chance to surround yourself with the fresh, alpine air. There’s also the option to explore the neighbouring villages on foot or by bike if you so wish. 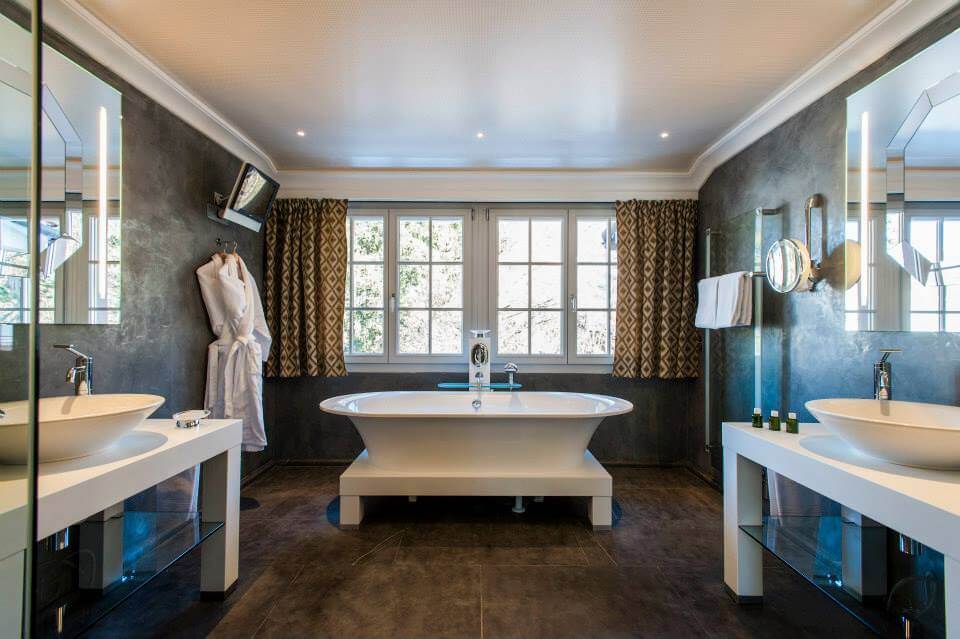 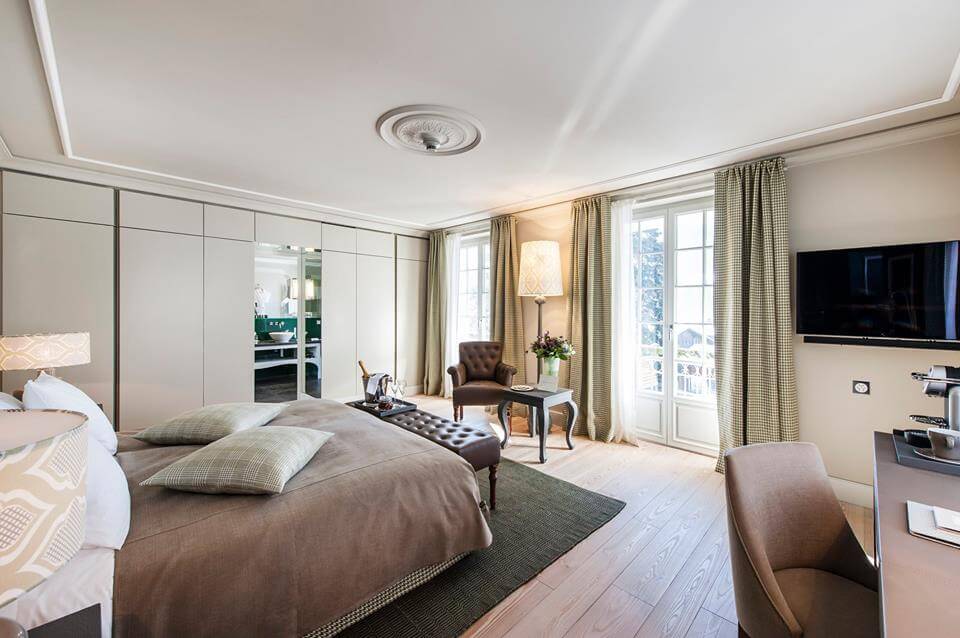 Like the communal areas, all 57 rooms have been furnished to the highest standard. Think quaint English cottage decor tinged with luxury sophistication. 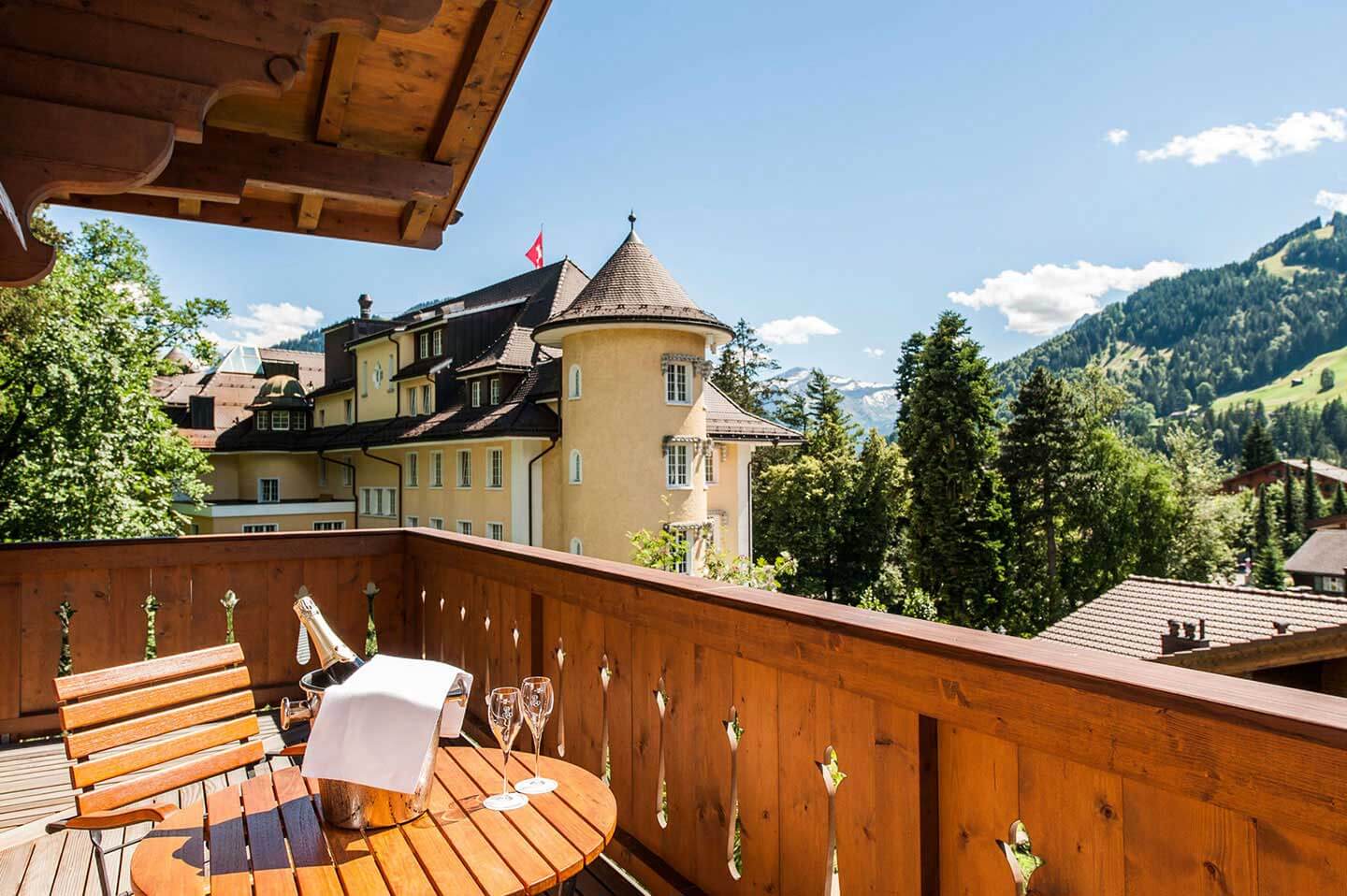 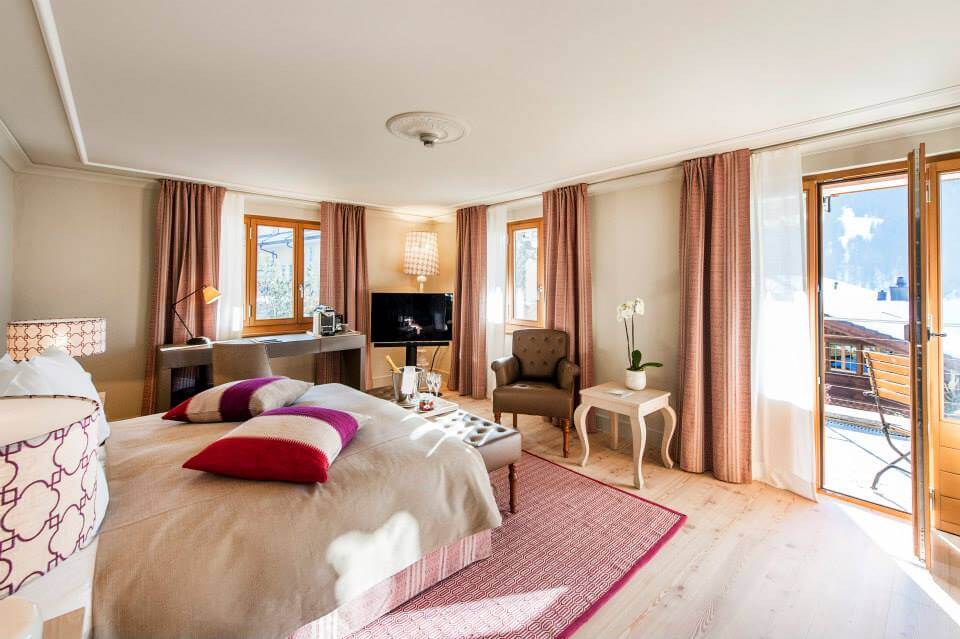 The rooms take the phrase ‘Gstaad chic’ to a whole new level – there’s wrap around balconies boasting picture-perfect views over the alps, plush curtains and the finest linen. And there’s the added extras that make the rooms almost feel like own; mini toiletries, snacks on your pillow at turn down service, and a mini bar. There’s a real sense of peace in these rooms – there’s Wifi (not that you need it), a flat screen TV and a fancy Nespresso machine. 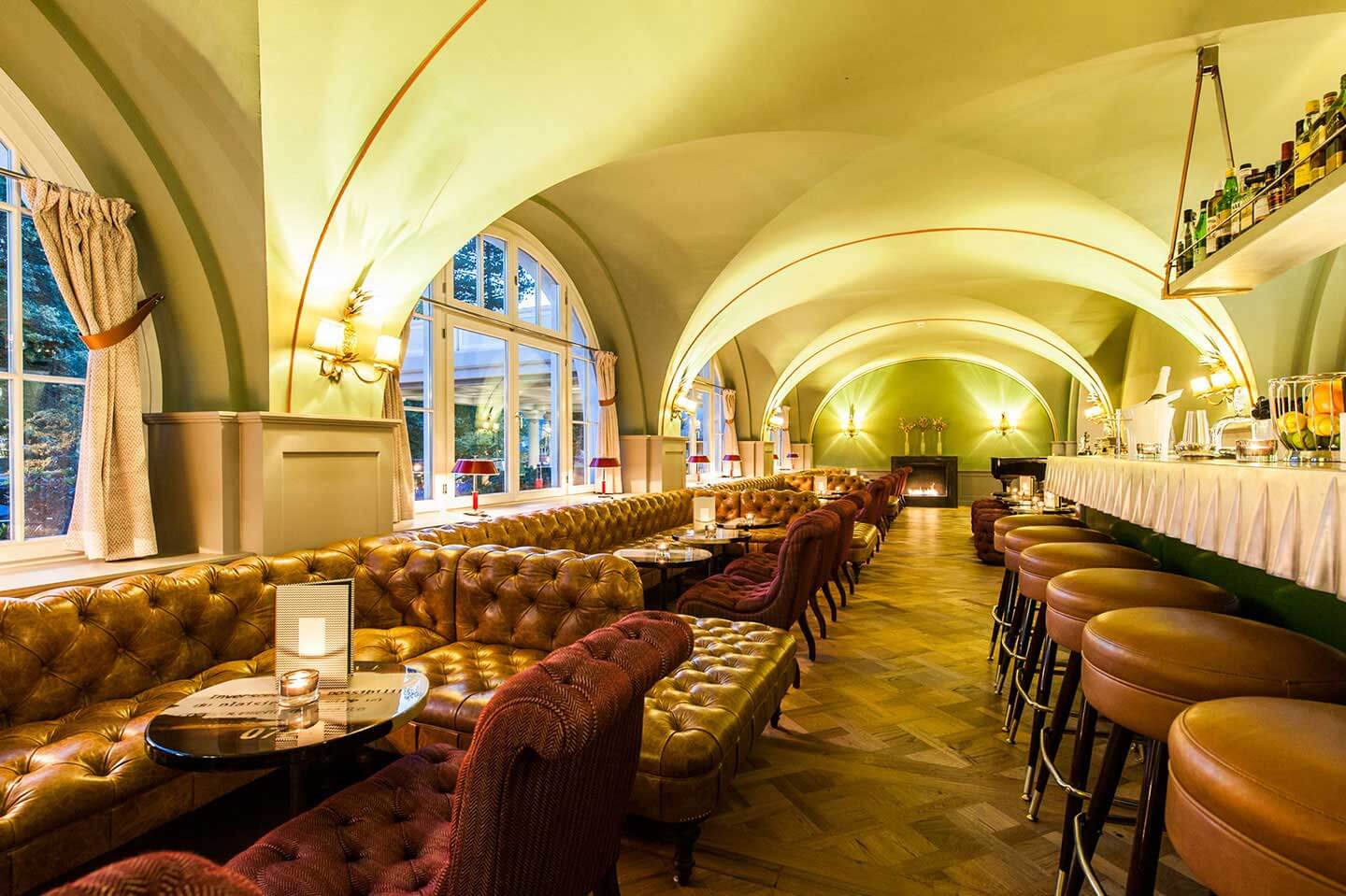 The yoga retreat goes well beyond a couple of vinyasa classes. During the three-day stay, there’s specially tailored lunch and dinner menus which are bursting with nutrient rich, wholesome food. For lunch, dig into Ottolenghi-style salads with European influences and big, global flavours. And if you think that the yoga menu is full of concept food and petri-dish sized portions: think again. The food is healthy and plentiful, there’s after-yoga snacks consisting of homemade granola bars and fresh fruit skewers.

For dinner, there’s everything from grilled fish, to roasted veg and other virtuous eats. Great time and effort has gone into the designing of the menus – and it’ll leave you feel healthy from the inside and out.

We may not be the most flexible of characters – but this yoga retreat taught us far more than a few yoga poses. It’s refreshing to take part in a yoga retreat which offers a balanced outlook on life. Less restrictive, and more of a ‘little bit of what you fancy’. We love.