More and more people are choosing to escape London on the weekends. I don’t blame them – we’ve recently gone from BBQ, swimming and sunshine to cloudy ceiling-fan mugginess. As a cyclist I’ll admit that I’ve been turning up to events so sweaty that I’ve had to ask the host for a towel. 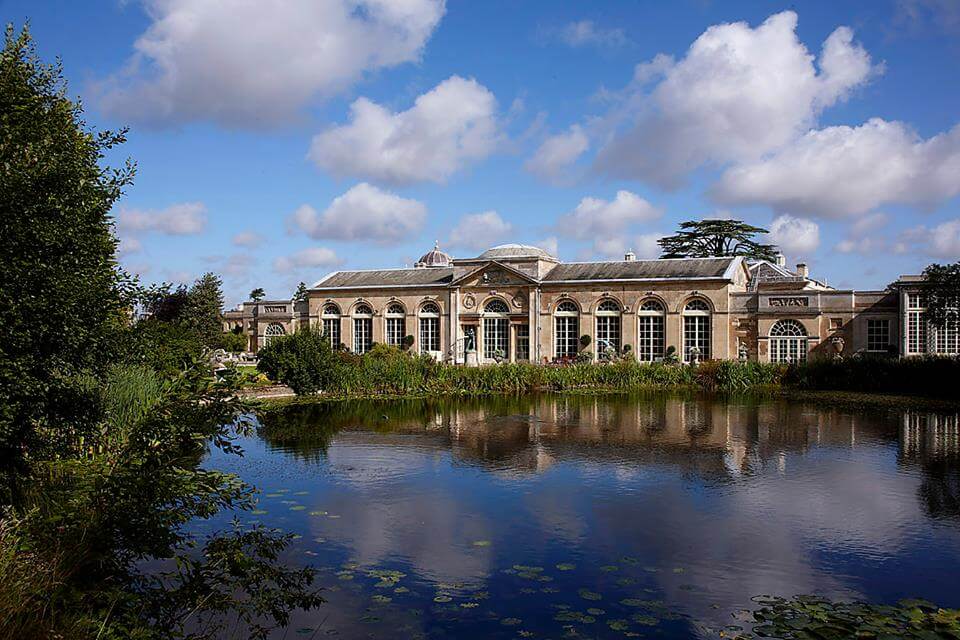 I, probably like you, had never heard of The Woburn Hotel (pronounced woo-burn), but a quick Google told me it was in Milton Keynes and I was suddenly worried I’d swapped one concrete enclosure for another. I needn’t be worried, The Woburn Hotel is straight out of Escape to the Country – sat in the heart of a 3,000 acre Woburn Abbey Estate in Bedfordshire. It’s a picturesque town complete with local pubs, churches, antiques stores and even its own Champagne bar. The hotel is partnered with the nearby Woburn Estate meaning you can get free entry to the gardens with your stay. It’s an offer we took up and one that’s not to be missed. 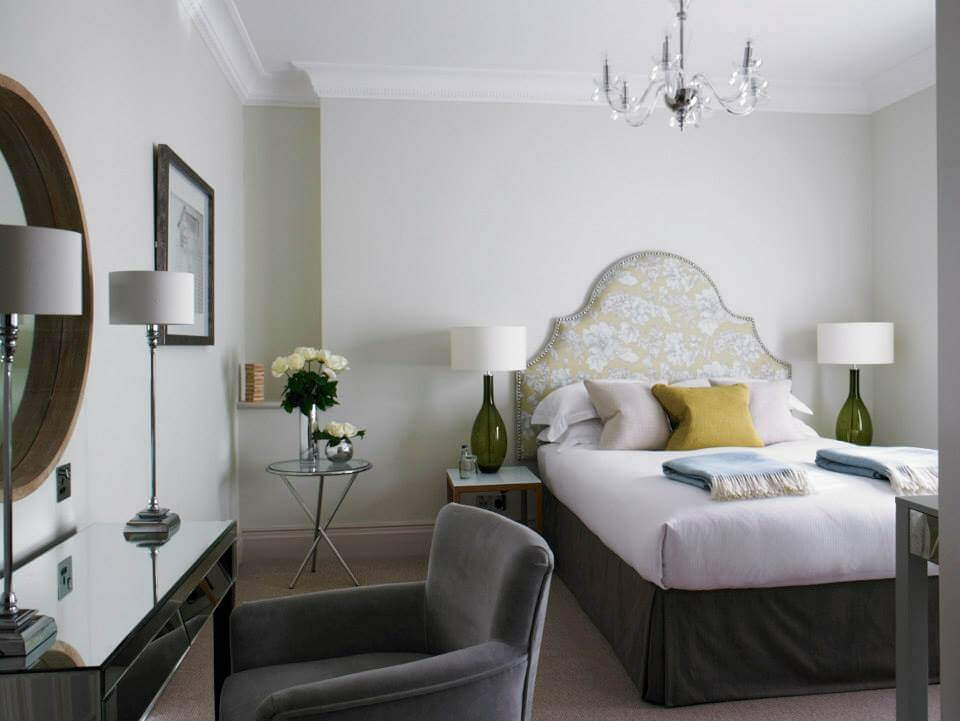 The Woburn Hotel is split between rooms and mini cottages spread out in the grounds around the main building. We were staying in one of these small cottages called ‘Cainsmore’; it truly felt like an authentic rural cottage in the heart of the countryside. Despite being close to the main town (and indeed the road), the design is such that you look out to lush grass and well-groomed gardens. It’s peaceful, comfortable and just what you want on a night away.

The room is split between a lounge and bedroom giving you space to be able to spread out throughout your stay. Just a note: the courtyard rooms are located around a small carpark, and it seemed a shame (especially considering the big car park provided by the hotel already) to have cars so near your front door, as this space would make a great place to sit outside otherwise. That aside, we loved our temporary bolthole and it provided the perfect place to return to in the evening.

The Woburn Hotel: The Food 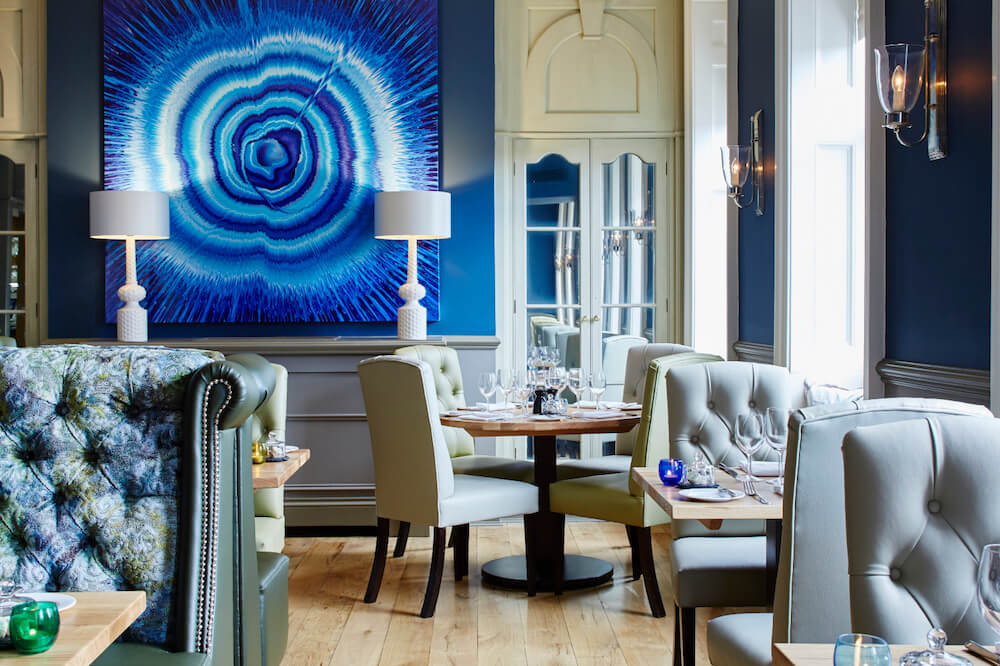 One of the main reasons we came up to The Woburn Hotel was to eat at the hotel’s much-awarded restaurant. Olivier’s Restaurant holds a 2 AA Rosette Award and is also a three-time winner of ‘The Foodies Guides’ Restaurant of the Year’ award for the region. I’m told the Chef, Olivier Bertho, has trained and worked in France for 10 years. Maybe it’s just me, but I can’t help but pine for rustic countryside classics when I’m in those surroundings.

At Oliver’s, it’s a far fancier affair. We started with a tian of duck liver with orange chutney and Pain d’Épices (we’re a long way from rustic here), and grilled scallop with crispy crab bonbons served alongside a crab mayonnaise and avocado dip. I should’ve guessed from the lack of pluralisation that the scallop was going to be, just one scallop (delicious though it was), the crispy crab bonbons meanwhile seemed an odd addition, with avocado dip completing what was a confused starter. The liver meanwhile was more generous, although served in a not overly appetising pyramid in the centre of the plate. 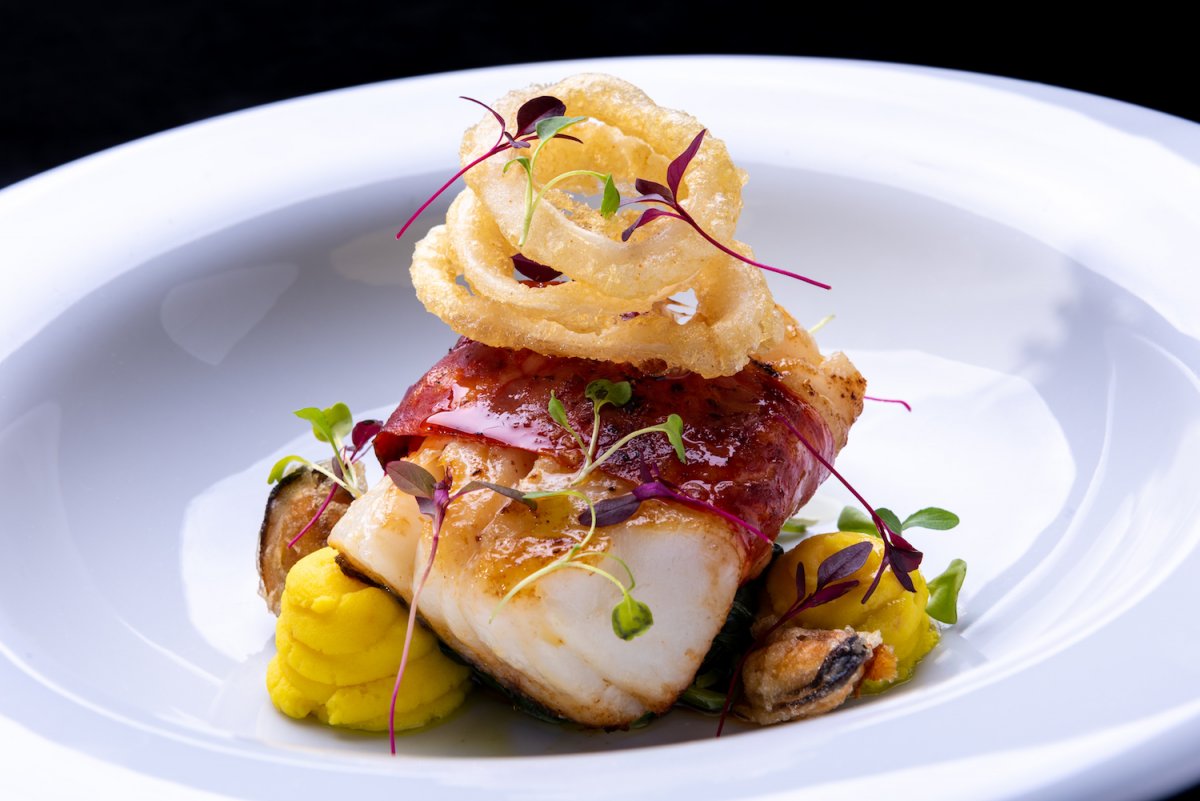 It wasn’t the best start, but with the main courses we started to see why this restaurant has won rosettes. First a roasted rack of lamb with navarin jus, honey roasted carrot purée, spring onion and polenta. This was great french cooking; the meat was perfectly pink and went well with the unique jus (and of course a little mint sauce). Polenta can be hit and miss but this was a delicious cake-y one that did a good job of absorbing the juices and balancing the plate.

Our other dish showed delicate flair: a baked cod loin with crispy wrapping of local chorizo. The squid rings seemed a needless addition as I was more than happy to flake the fish with the creamy saffron mash. However, the sides were bizarre as they didn’t really fit with the meal, and it almost felt like they had come from another kitchen. The tomato mozerella salad had a giant mound of guacamole on top, whilst the gratin dauphinois was a little dry and also very small for two people sharing. That said, overall it was a nice meal and certainly a much more refined dinner then you’d  expect in a country hotel, but then again we hadn’t visited the neighbours yet. 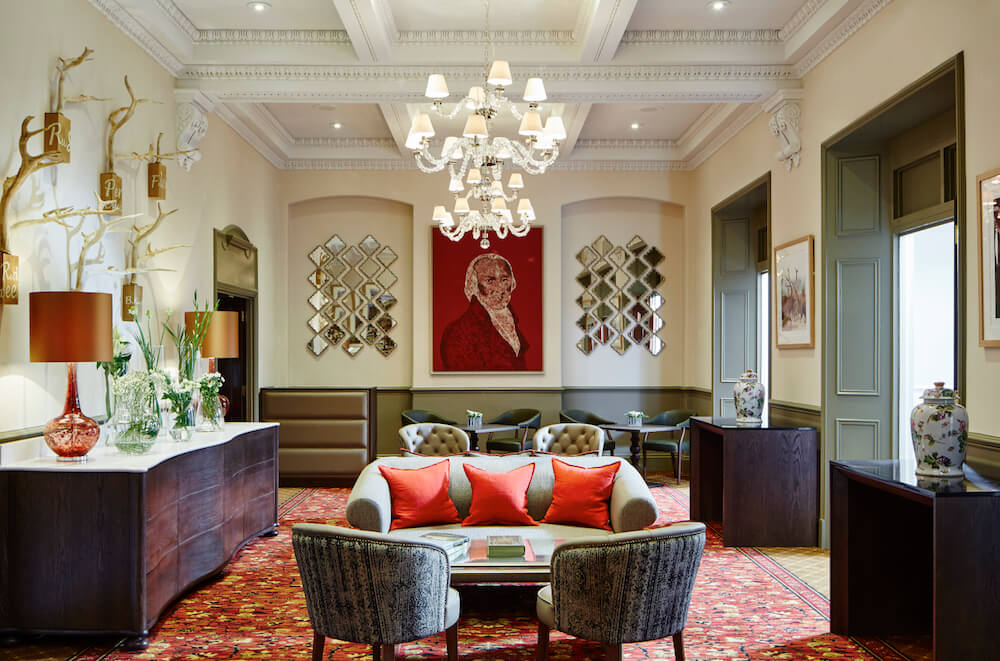 Having witnessed some pretty accomplished cooking the night before we were a little disappointed to find breakfast the next day was buffet-style. Nothing beats a freshly cooked full English; it needn’t be fancy or reimagined, but hot and fresh are pretty key. We had some hash browns that were sad and floppy, eggs never survive for very long and the bacon had started to do that thing where it simultaneously sticks together and crumbles apart at the same time. It’s a really disappointing part of what is otherwise a really accomplished hotel. Keep a few chefs around in the morning?

The Woburn Hotel: Things to Do 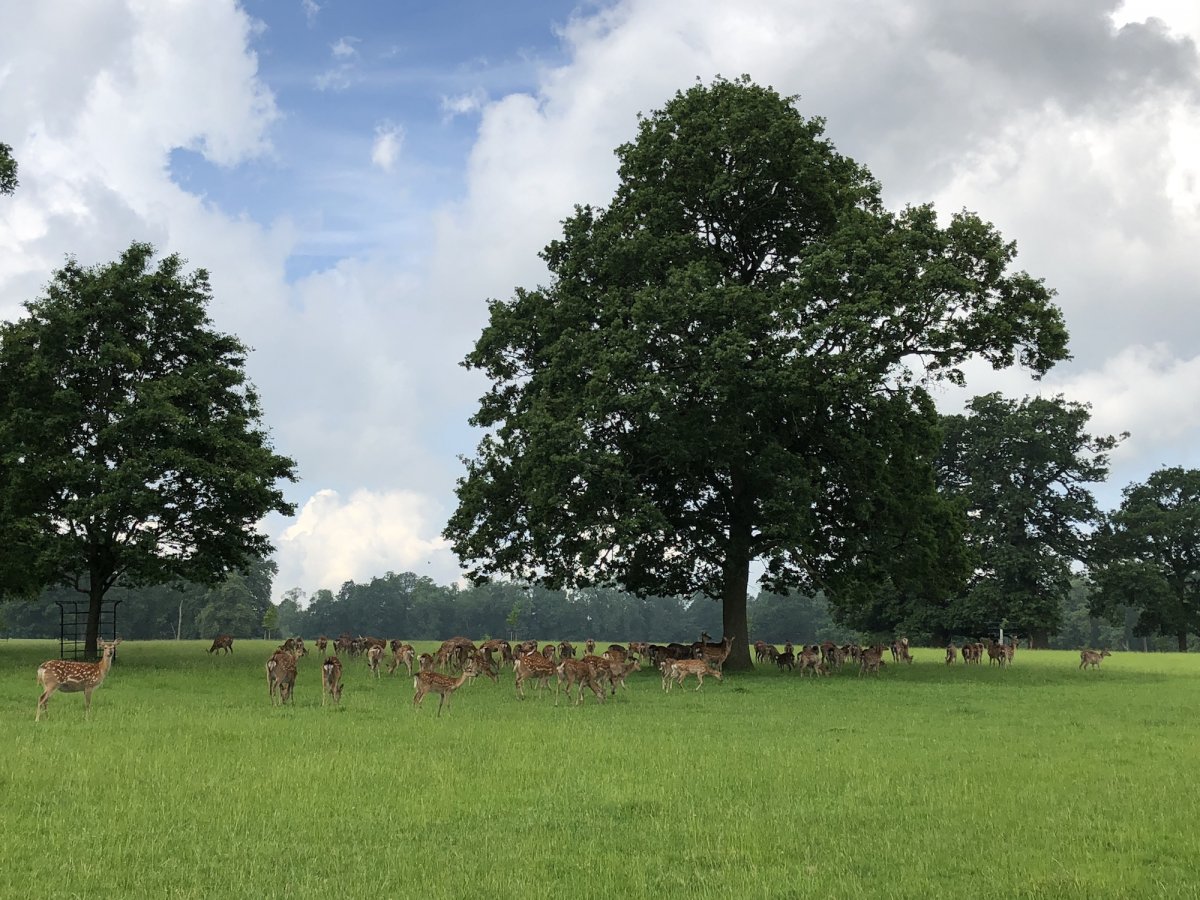 Just a couple of minutes from the hotel sits Woburn Abbey. This amazing building has been in the same family since the 17th Century. It first opened to the public in 1955 and you’re able to explore 22 rooms each with an impressive private art collection (there’s over twenty Canalettos in the dining room!). There’s also a whole load of 18th Century French and English furniture, silver, gold and perhaps best of all, an army of knowledgable guides to tell you all about it.

If big ol’ houses aren’t your thing then the Abbey is set in 3,000 acres of Deer Park, home to nine free roaming species of deer. Just driving through past these wild deer is enough to warrant a trip out of London.

The Woburn Hotel: The Verdict 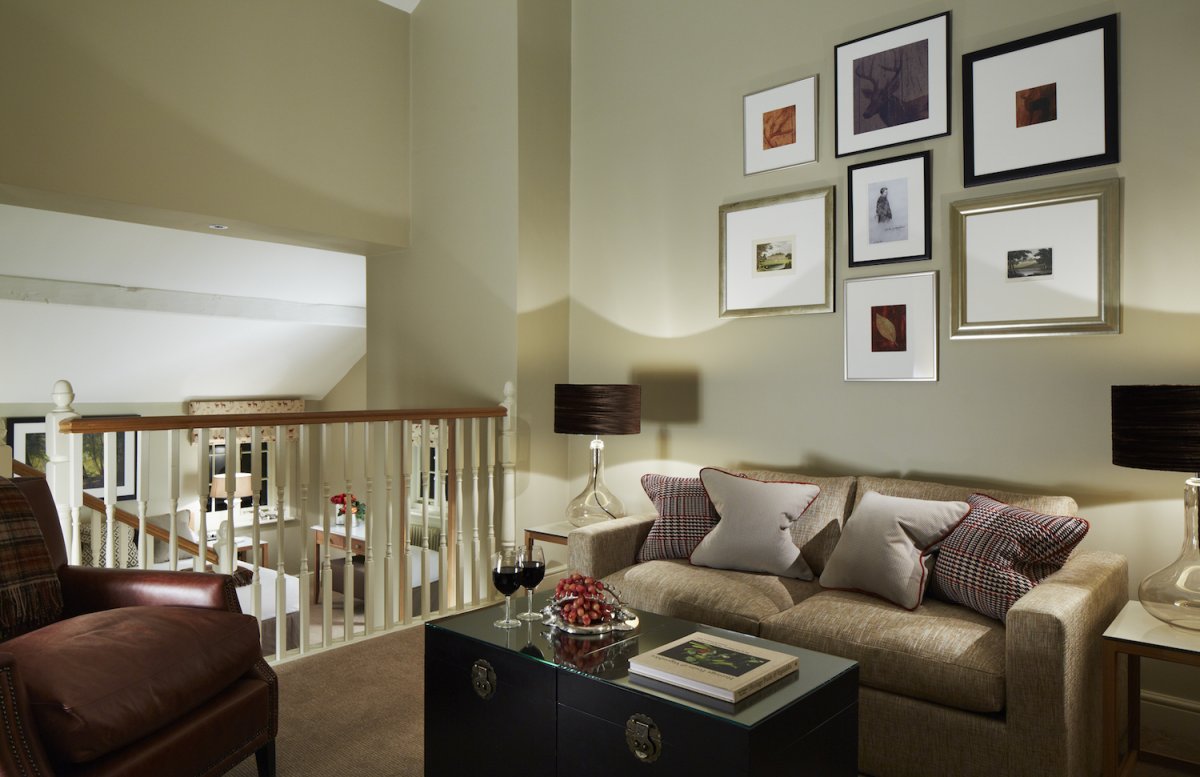 The Woburn Hotel has plenty to offer for tired, sweaty Londoners. Just over an hour out of the city and you can be surrounded by deer, local pubs and relaxing in your own mini-cottage. A trip to the Abbey is not to be missed and dinner at Oliver’s is a good option for those wanting to have an affordable ‘fine dining’ experience. The breakfast is best avoided (espeically if it’s not included) – but with hugely comfortable rooms you’ll be just as happy grabbing some pastries from the town and enjoying the views.

For more information on The Woburn Hotel, see here.