When I say to you ‘escape to a luxurious spa hotel for the night’, being honest, Liverpool Street probably isn’t your first thought. Unless, of course, you’re planning your train route out of the city. But indeed this review is for the new Pan Pacific Hotel, which is just metres from the station in what I think is fair to say,  not an area that screams tranquillity.

However, once you step through those sliding doors you escape far further than any train will take you across the road. Because the Pan Pacific isn’t just offering luxury; this is Singaporean luxury and yes, that’s a thing. 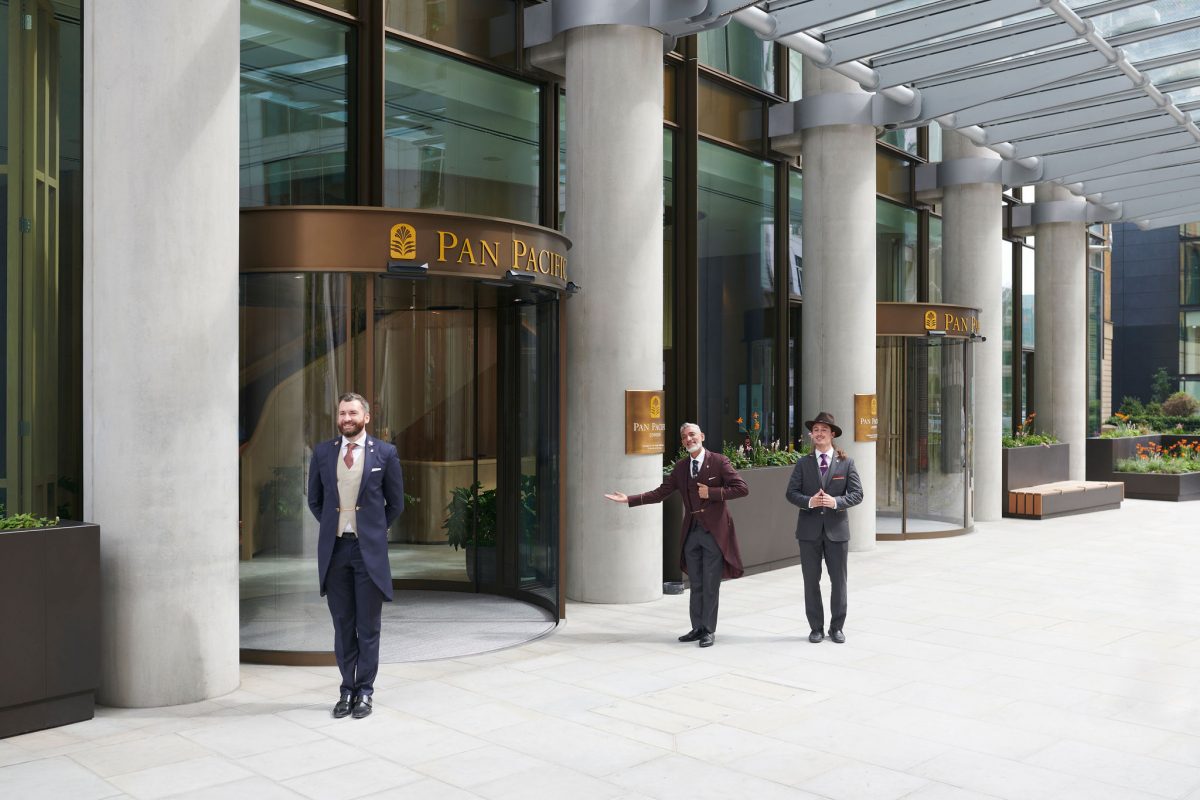 The hotel is located in the new Bishopsgate Plaza which encapsulates not only the 43-storey bronze tower of Pan Pacific London as well as private apartments, but also the 144-year old Devonshire House. It truly is old meets new West and East blended together in Central London. It’s not just the furniture that’s brand new in this hotel, the staff have that ‘thank god lockdown’s over energy’ and seem genuinely buzzing to finally be able to show off their 40 floors of luxury. On arrival, we’re handed our keys (with two hands, of course) and even politely escorted to the lifts ready to whisk us up to the 11th floor.

The hotel, including the rooms, event spaces and public areas, have been created by the esteemed design duo Yabu Pushelberg. They’ve aimed to fuse “south-east Asian vibrancy with the refined elegance of traditional British design” and they’ve done a great job. 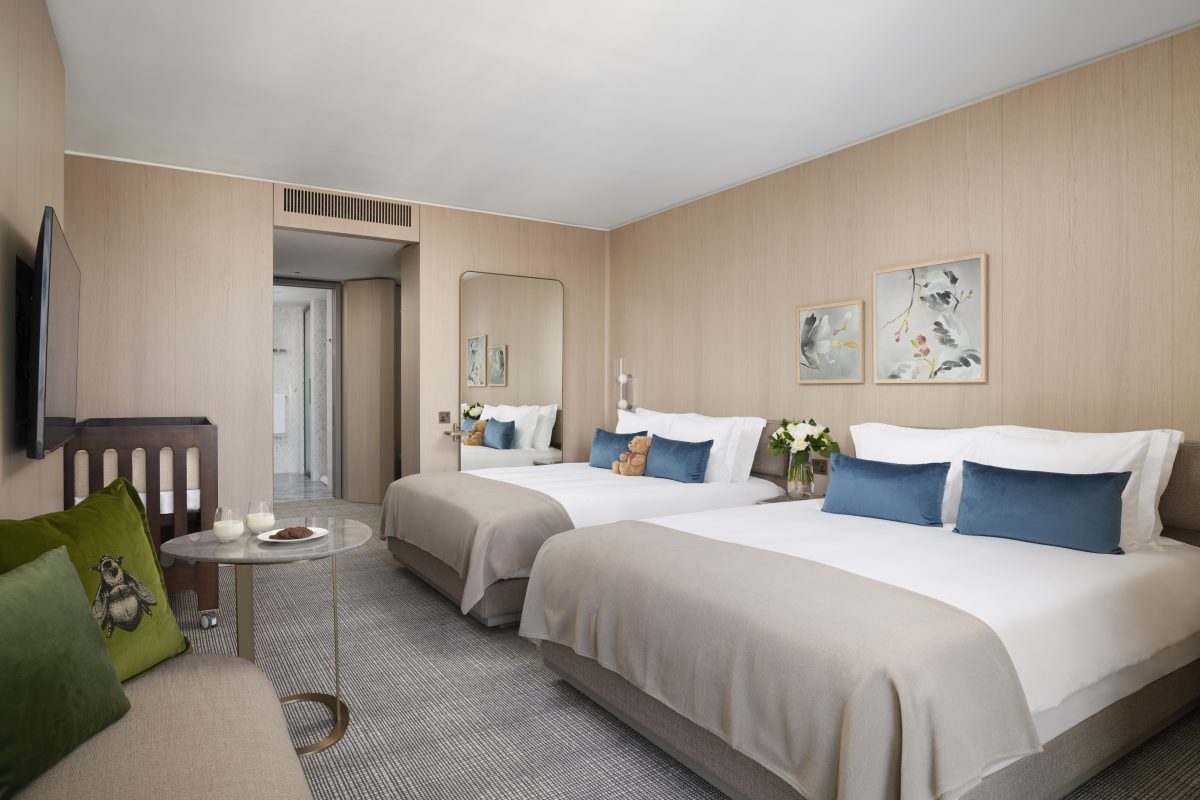 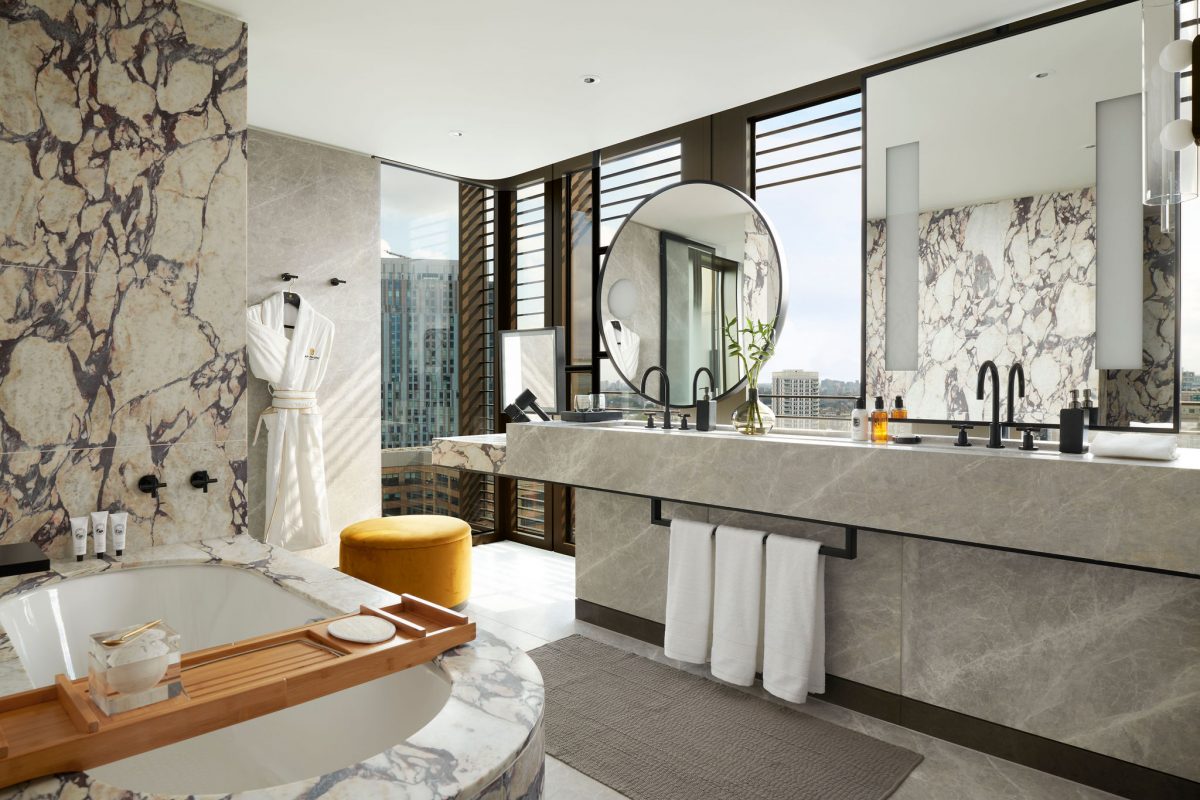 There is a sense of peace and calm through the hotel with wide-open archways, curved walls and neutral colour palettes. Pan Pacific doesn’t feel like it’s trying too hard to be trendy or luxurious. Instead, there’s a sort of effortless elegance everywhere you look (with plenty of Instagramabble spots too). That’s no more true than in the rooms. There are 237 rooms in this hotel and the one we were in (a twin) was one of the nicest we’d stayed in in London.

It’s all in the attention to detail; whether that’s the Diptyque amenities, the button controlled curtains, multi-setting dimmable lights or the dressing gown that feels like a hug from a polar bear (although I’ve never actually done that, but assume it would be nice?). I’m told that they’ve banned 90-degree angles in the room in order to create a truly restful space. I’m not sure if it was that or the huge double bed and range of pillows, but in any case, we had a great night sleep in this room. 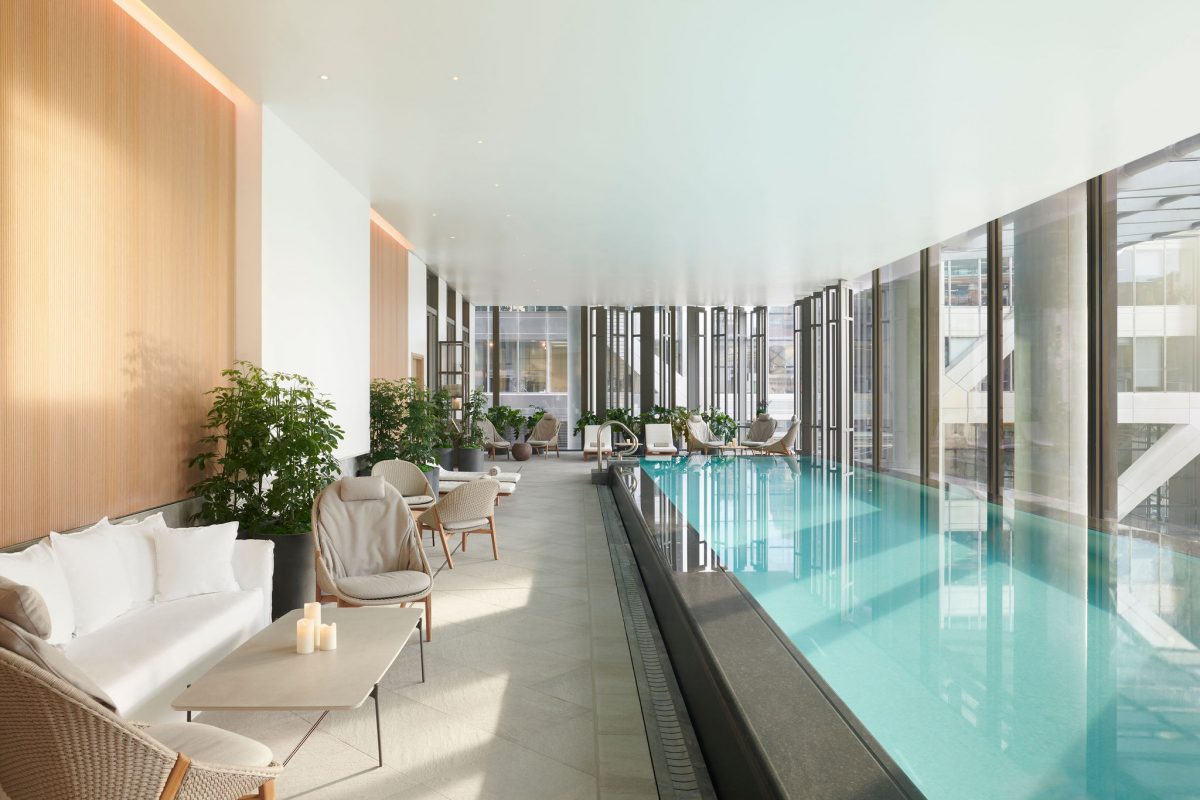 Once you’ve opened all the little boxes in the bathroom, found the slippers and put on your polar bear, it’s time to head to the Pan Pacific spa on the fifth floor. The spa hosts a gym (we put our heads around the door) as well as offering a full range of treatments, but we were here for their very unique infinity pool. At the time we had the whole place to ourselves (tourism is still recovering in London) and I think this is the UK’s new equivalent to THAT lost in translation pool.

A surprisingly large and long tranquil pool overlooks the bustle of the commuters, buses, taxis and trucks below. You can’t help but feel smug as you gently glide from side to side free from the chaotic scenes happening below you. You do also spend some time wondering, if I can see them, can they see me? It takes some getting used to walking around in a dressing gown by the pool as someone in your eye line does some photocopying in the building next door. If you’re still feeling the effects of daily life, pop into the changing rooms, equipped with (of course brand new) steam and saunas as well as all the balms and body gels you could ever need. 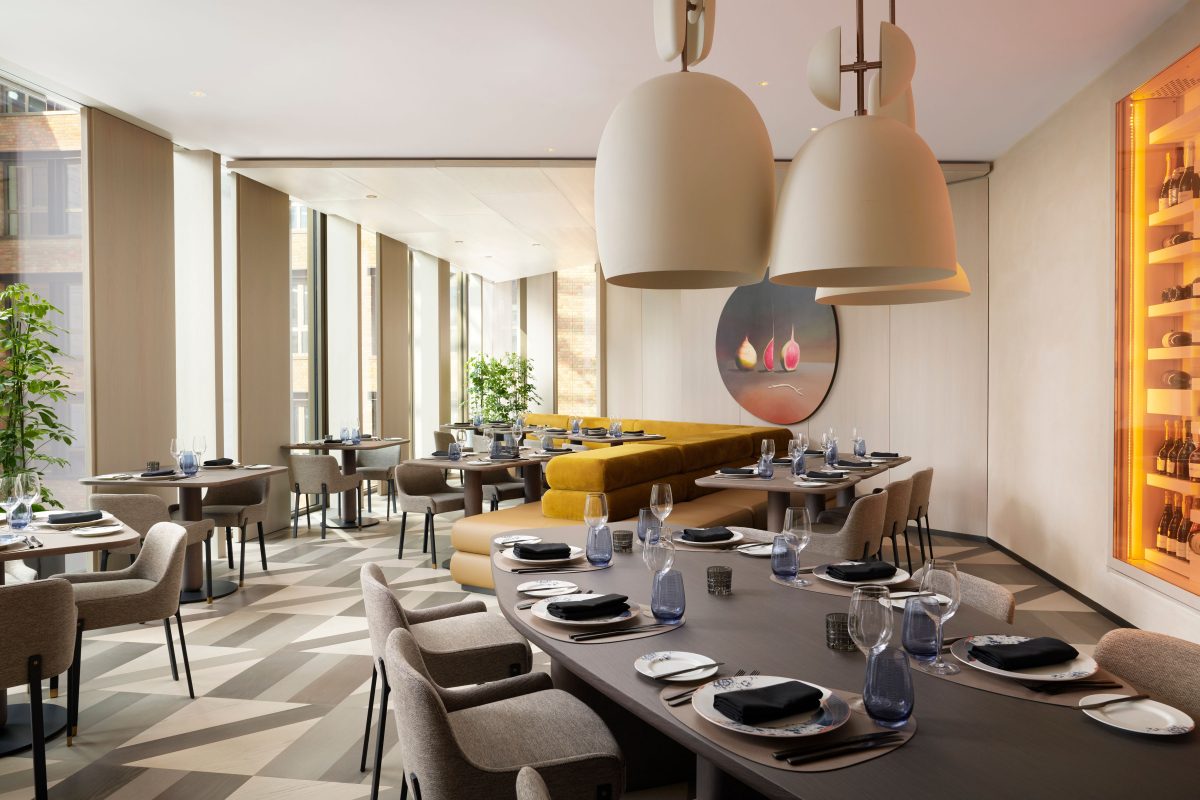 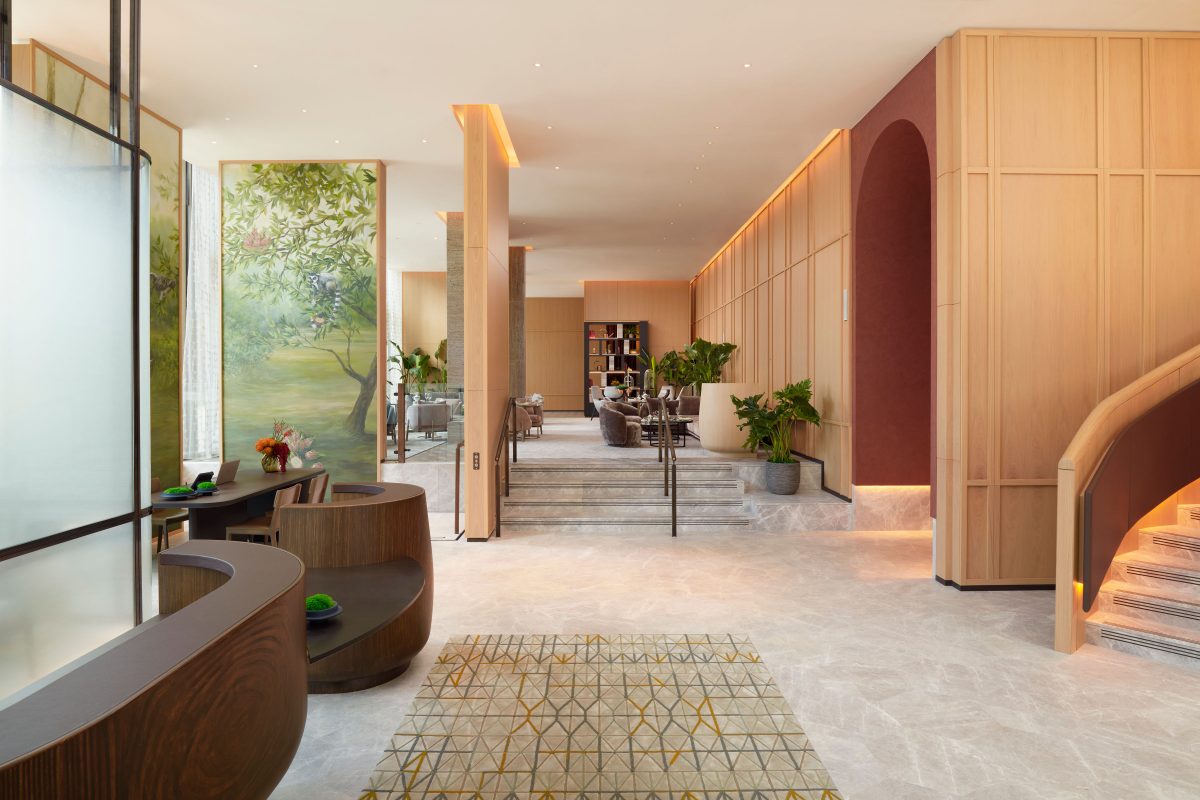 When you wake up – the curtains gently sliding open as the City lights up through the large glass windows –  there’s breakfast down at ‘Straits Kitchen’. In total, the hotel boasts an impressive five restaurants led by the award-winning Executive Chef Lorraine Sinclair. They work closely with British producers, Nurtured in Norfolk, to grow their own high-quality Asian ingredients along with sourcing local produce to help minimise the carbon footprint. At breakfast, you can expect a great selection of pastries, fruit, meats and pickles as well as various combinations of the classics on toast. The restaurant overlooks the street below, a reminder that you will imminently be leaving this tower of tranquillity and heading back into the real world.

The hospitality sector has had a hard time in the past 18 months and it’s great to see new hotels, staff and energy returning to the centre of the city again. The Pan Pacific is a serene haven; a brilliant blend of modern facilities, friendly service and refined design. I didn’t know what Singaporean luxury meant before visiting Pan Pacific, but now I do and I can’t wait to go back.

For further information on the Pan Pacific Hotel, see here.