The Archer Hotel is like that cool cousin you see once a year at family parties. They’re so understatedly cool, that you just want to be mates with them. Archer Hotel is totally that – unassumingly chic. This industrial-style hotel is located in the heart of the Garment District, only moments away from some of New York’s most iconic attractions – Empire State Building, Times Square and Bryant Park to name but a few. 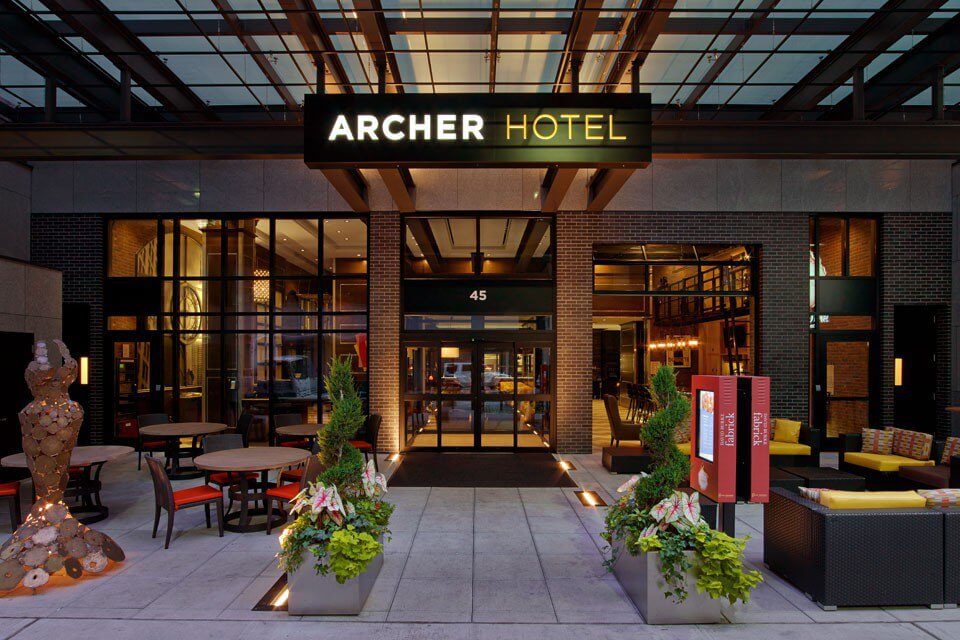 Heading to the Big Apple? Read on to discover why you should spend your precious sparkles and time at Archer Hotel. 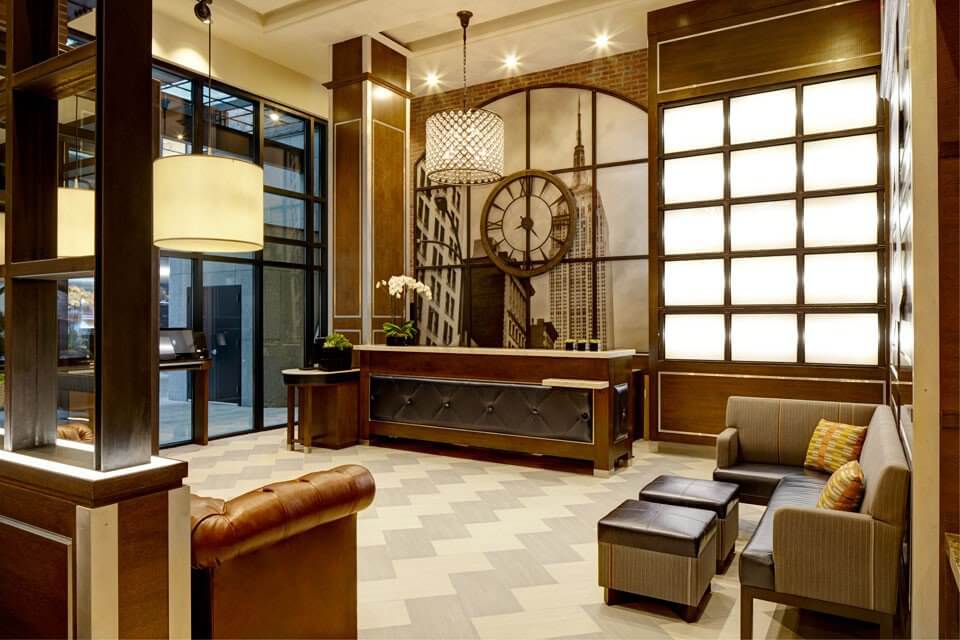 Archer Hotel is 22 storeys high and is home to 180 guest rooms in one of four designs. Due to its central location, space is of a luxury commodity, but this is NYC, and there’s better things to explore than your room dimensions. There’s a running theme throughout the hotel  – the elusive ‘Archer Character’ – who makes his company known. He has a strong eye for art, a collector of quirky ornaments, and a penchant for well-made cocktails. 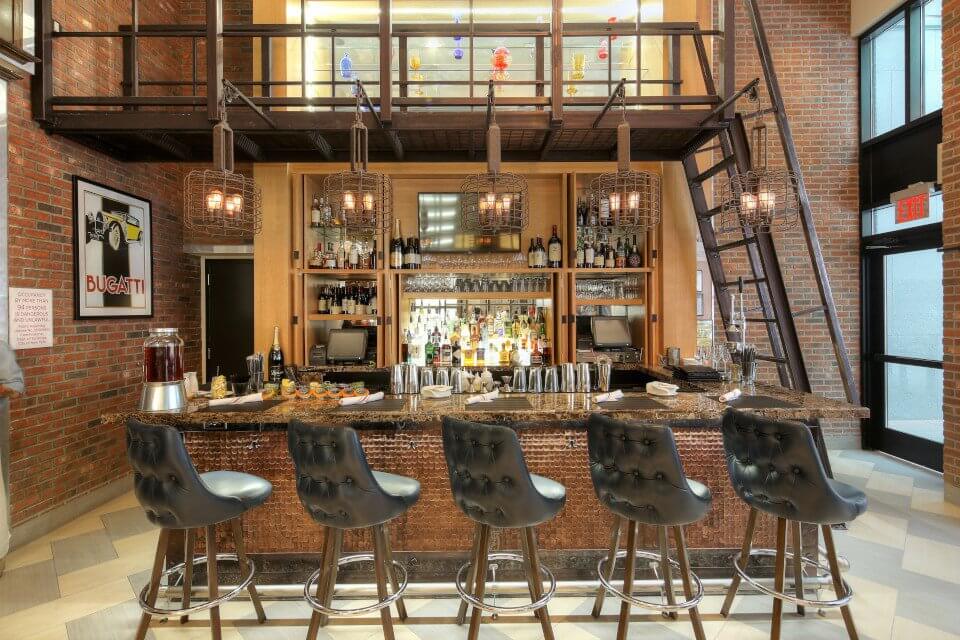 With such an eye for plush decor and avant-garde art, you’d expect an almost exclusive clientele, thankfully however, this isn’t the case. Archer Hotel doesn’t do pretension. In fact, it’s anything but. The hotel’s welcome feels like you’re visiting your distant aunt you haven’t seen in years; the big New York grin certainly goes a long way. 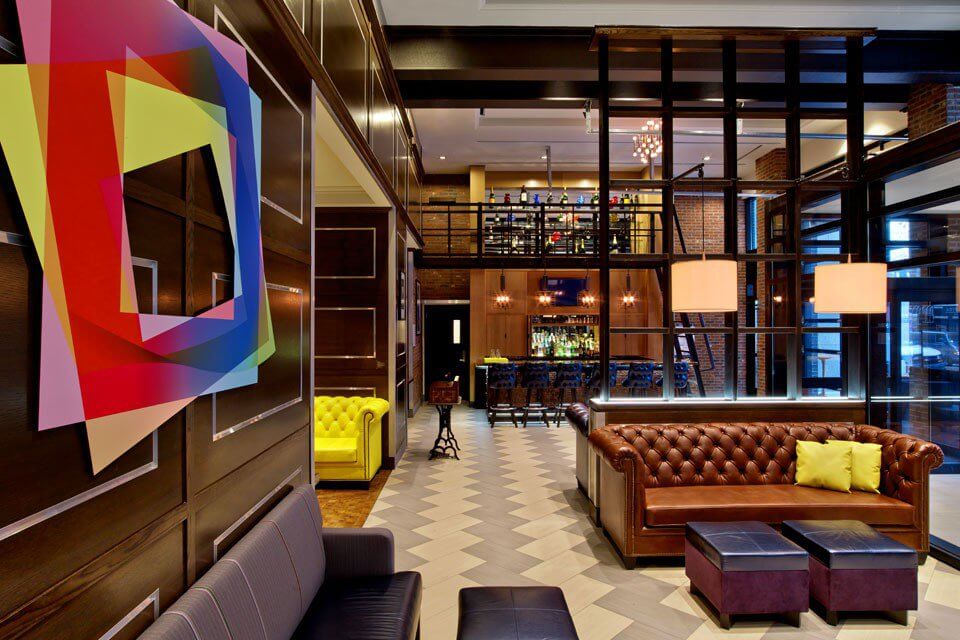 The communal areas such as the lobby and downstairs restaurant have been designed with a playful eye. There’s hand stitched banquets, low-lit lighting and dark wood panelling. Archer Hotel is also the place that attracts non-hotel residents. The early morning yoga hunnies, donned in head to toe Sweaty Betty gear who pass through for a green juice and a buckwheat pancake at David Burke’s, Fabrick Restaurant. And there’s the city workers who drink in the New York skyline from the hotel’s rooftop bar (but more on that later). You see, Archer Hotel has firmly presented itself as more than a hotel and a place to catch 40 winks. It’s a place for freelancers to settle in and use the wifi, a hangout for friends to meet over an Americano, and a pitstop for nearby workers to refuel over a long lunch. 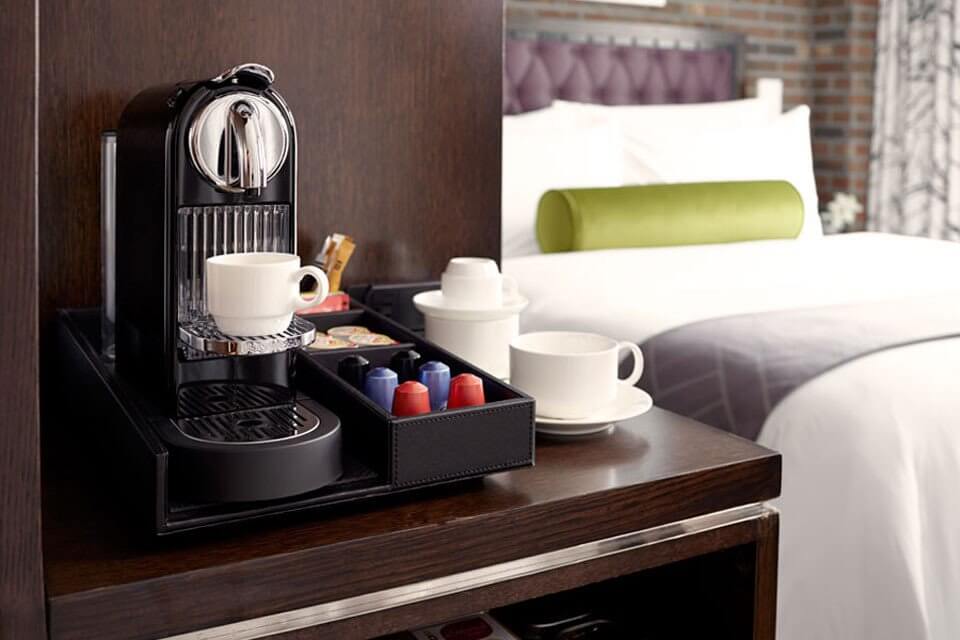 There’s no sugar coating it – the rooms are small, well, compact. If you’re a solo traveller or a couple who’s ok with side stepping and shuffling, then you’re all good. This hotel certainly wasn’t made for families/ pushchairs / suitcases with your kitchen sink inside.  The room’s decor is a modern blend of exposed brick walls and high-end fabrics. They’ve taken the whole monochrome theme and have totally ran with it. Think black granite flooring and crips white linen, brought together with purple accents. 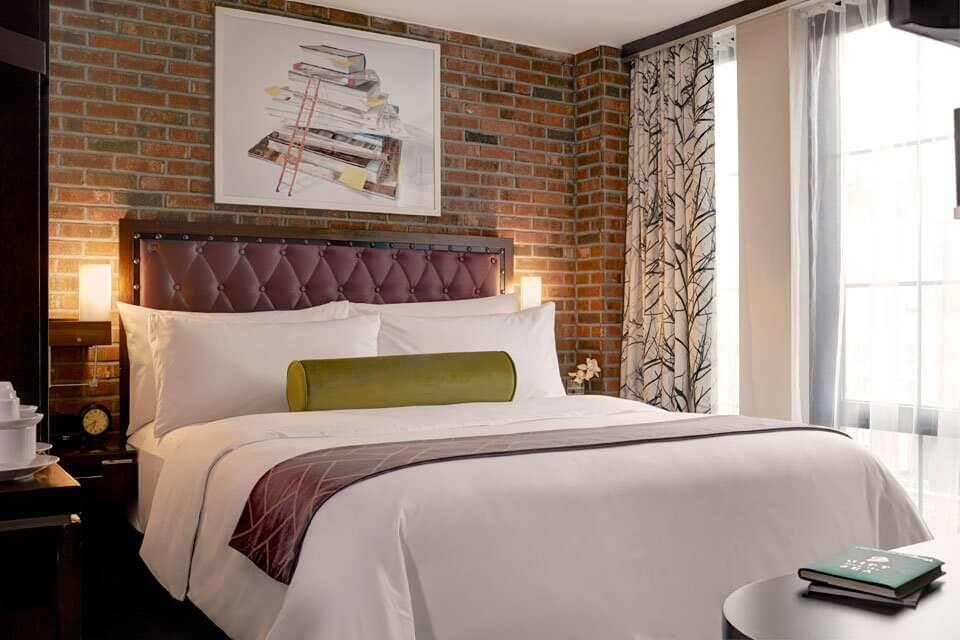 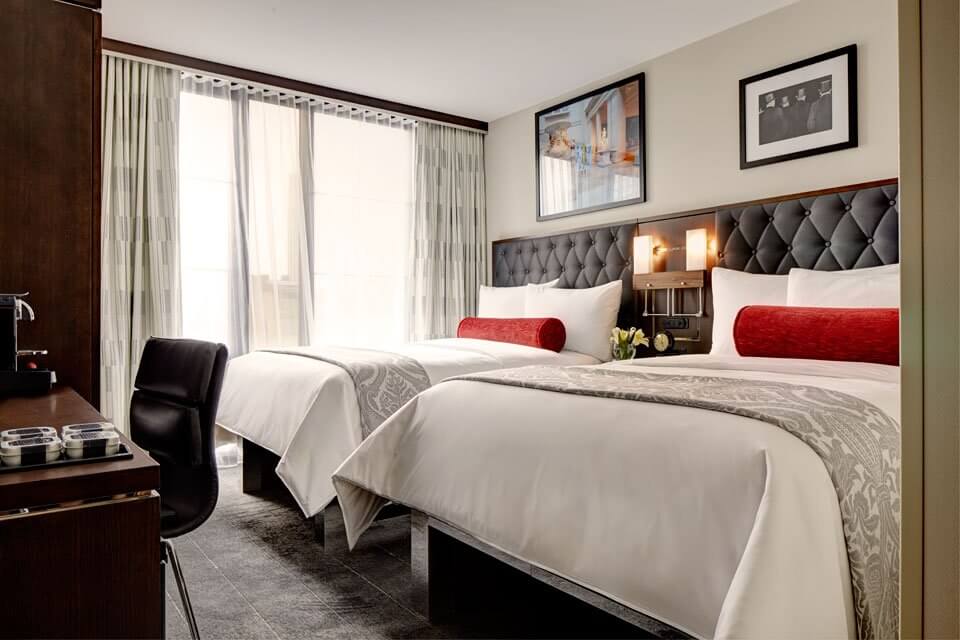 From the luxury draped curtains to the studded head board, it almost feels like a bedroom you’d find in a luxury apartment in the West Village. And with such uber luxurious features, comes the small trinkets that many hotels don’t offer. I’m talking about a vast array of toiletries, cookies, homemade chocolate and other tasty edibles. There’s a coffee machine offering unlimited Nespresso pods, and little treats left on your pillow after the evening turndown service. The size of the room doesn’t seem to matter when you’re nibbling on warm chocolate chip cookies and drinking barista-style coffee on the most cloud-like bed. 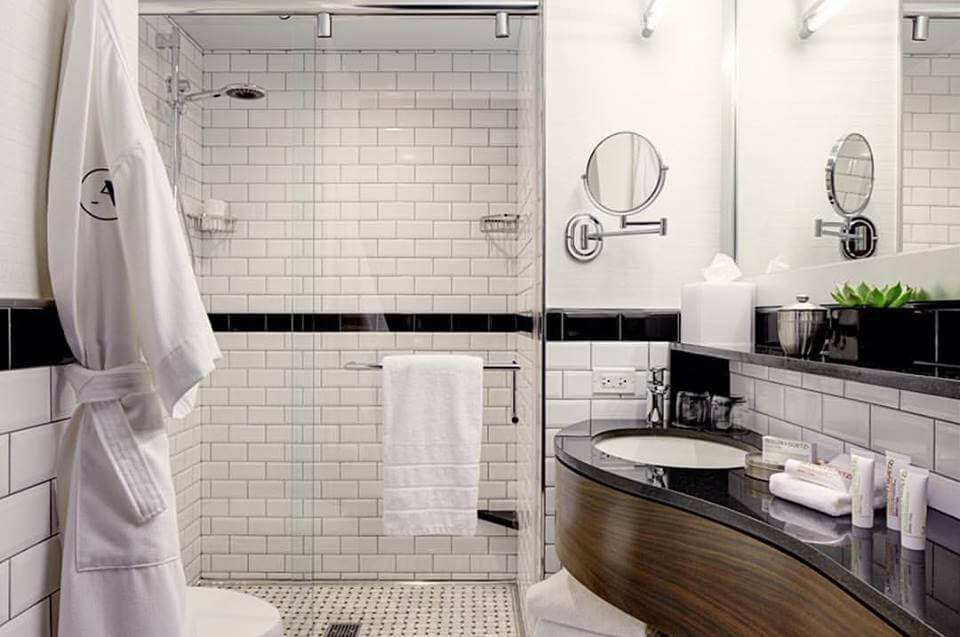 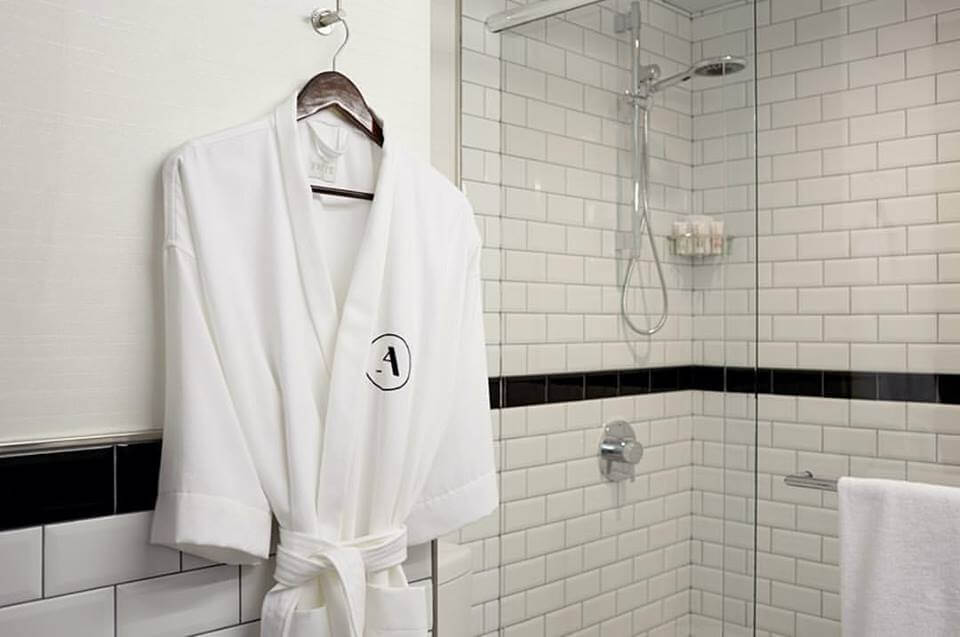 The bathroom also boasts the black and white colour scheme – there’s black and white tiles, a power shower and the fluffiest bathrobes. If you want views. You’ve got them. The floor to ceiling windows offer an unrivalled outlook onto the Empire State Building – it’s so close, you can almost touch it. Almost.

The rooms are also equipped with charging points, hidden storage, free wi-fi, slippers, books and an MP3 bluetooth music player. You don’t need anymore, and if you do, the super efficient concierge service is only a phone call away. 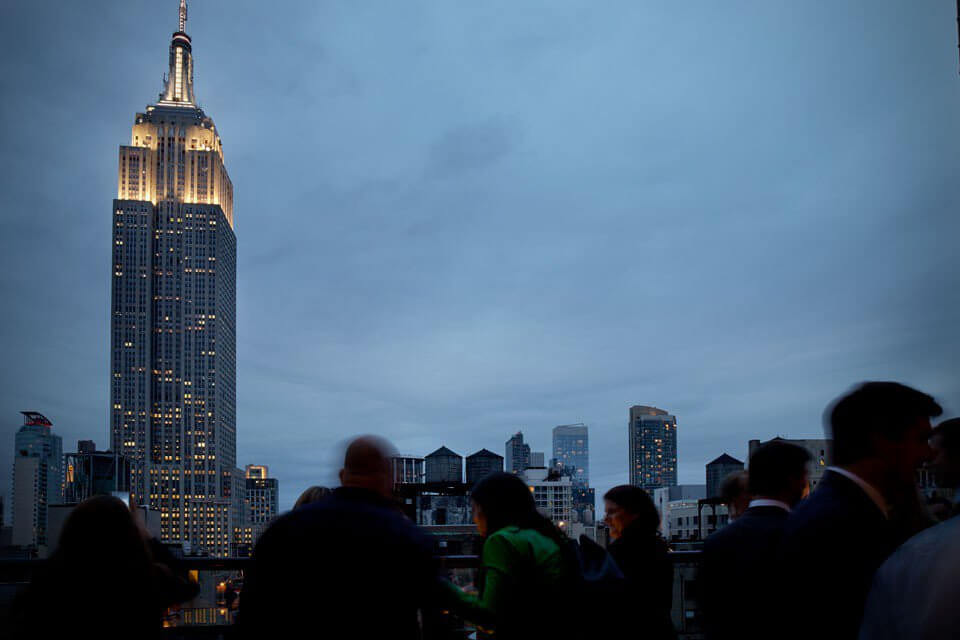 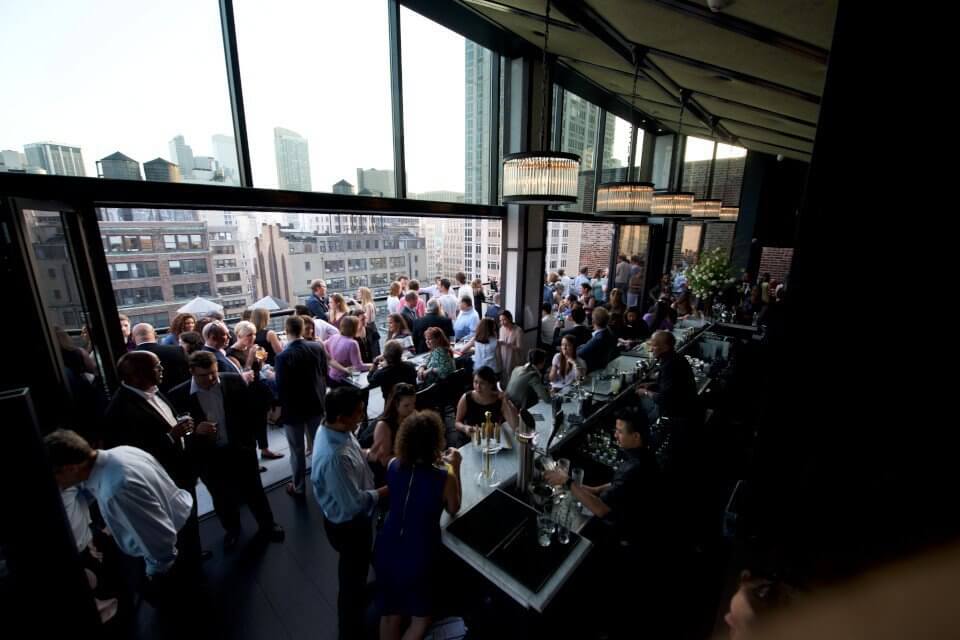 Spyglass at Archer Hotel really is the crowning glory. This rooftop bar offers one of the best vistas of the Empire State, and it’s not difficult to see why the outdoor bar fills up quickly; killer cocktails, beaut views and a poppin’ atmosphere to boot. If you don’t want to linger by the bar, book head and secure a table. No one wants to drink cocktails whilst preying on a potentially free table. That just doesn’t bode well. 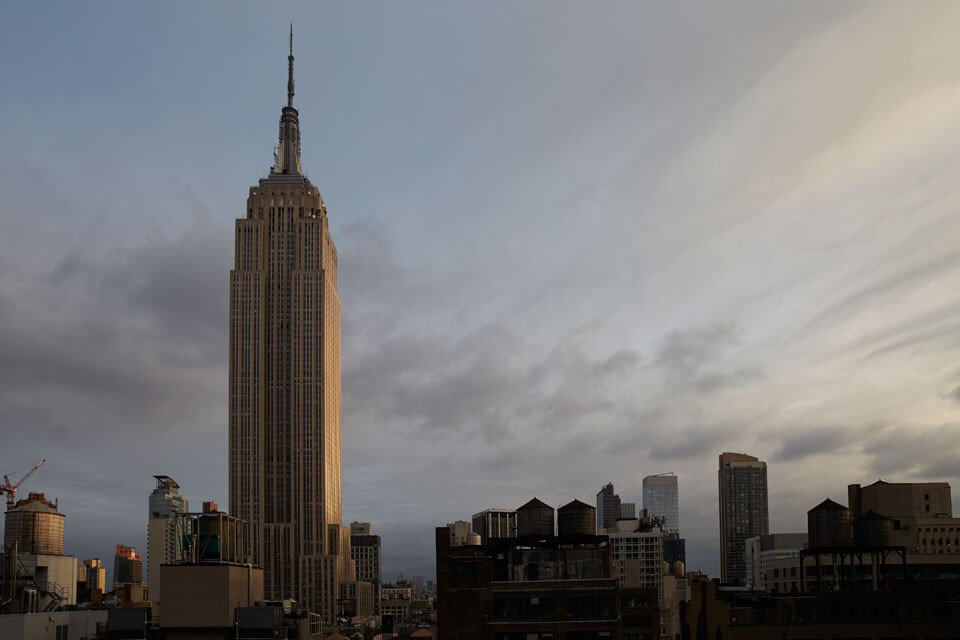 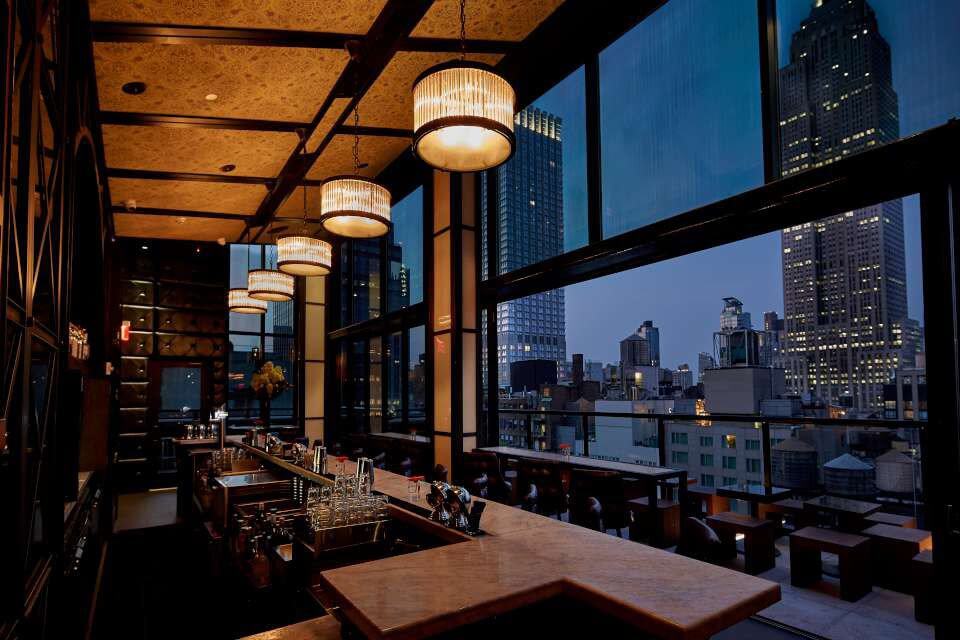 Archer Hotel is everything you could ask for when it comes to a city stay. The location is unbeatable and the rooms, however snug, are modern, clean and comfy. Even if you don’t squeeze in a stay, the Spyglass bar is a must visit – there’s good reason why Spyglass heavily features in many top ten bar lists. Make sure you take the complimentary slippers, they’re glorious.