Brits undoubtedly have something of a love affair with España, but with over 500,000 square kilometres to explore it’s perhaps about time to discover a new corner. It’s easy to see why the region of Extremadura is Spain’s up and coming province; with glorious temperatures, seriously tempting food, incredible vistas and no shortage of interesting towns to while away the time in, it’s sure to become a new favourite. Summer temperatures can hit the mid-thirties – this is southern Spain after all – but as the days slowly warm up from now on it’s the perfect excuse for a springtime break. 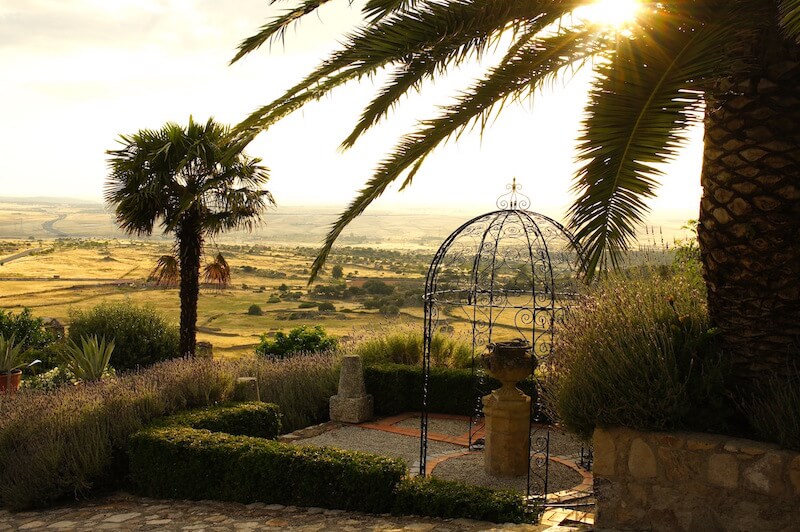 Trujillo: Where to Stay 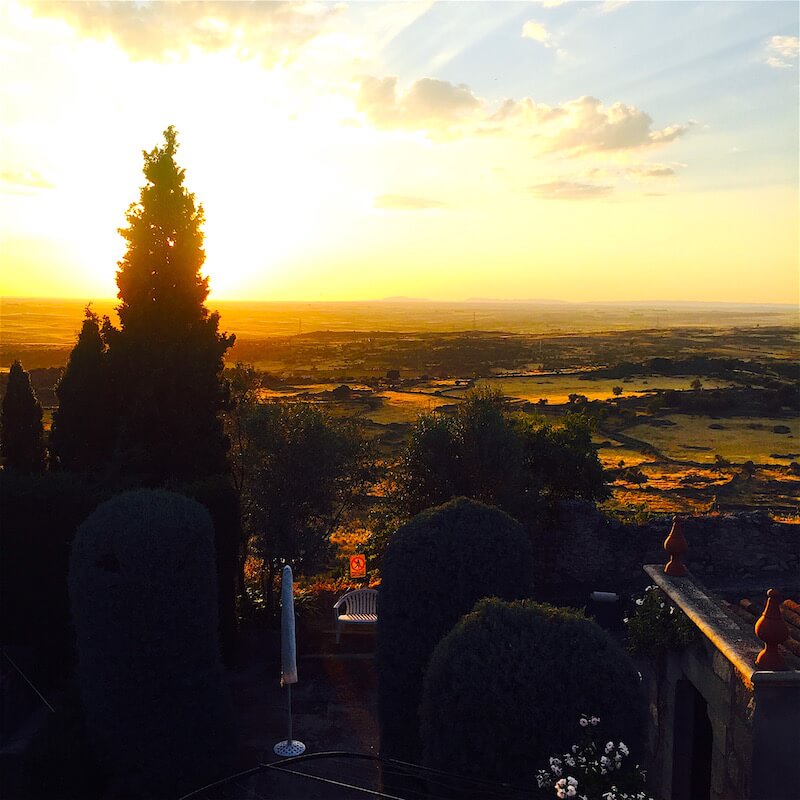 Head to the magical hilltop town of Trujillo, birthplace of the Conquistadors and the home of Trujillo Villas España, a collection of beautifully authentic family-run villa rentals, capturing the very essence of what this corner of Spain is all about. The seven properties range from the quaint two person Artists Cottage to the grand Villa Martires, an elegant estate presiding over the Trujillo skyline, built during Roman times and extended in the twelfth century as military garrison to the town’s castle. Set in formal landscaped gardens, the villa and its neighbouring Garden Cottage – together sleeping 10 – offer simply spectacular views over the countryside towards Portugal and the Gredos mountains. With a tennis court overlooked by the town’s castle battlements, a refreshing Roman-style pool and beautiful old rooms to explore, packed full of original features, you’ll want to dine outside come evening either in the gardenia-lined summer dining room or on the stunning terrace to catch the utterly sublime sunsets.

Trujillo: Where to Eat 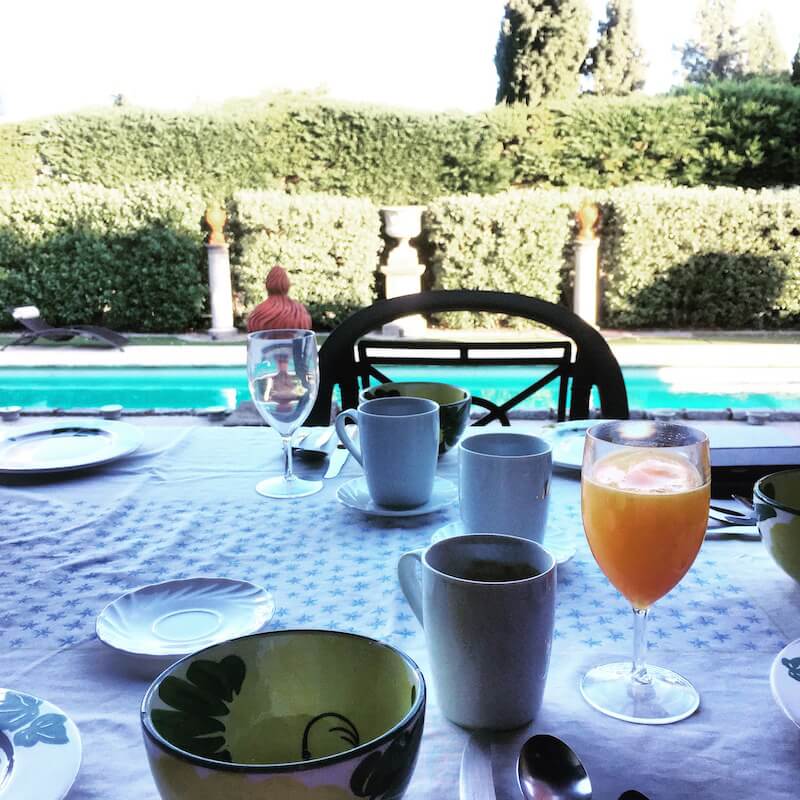 Trujillo might be small, but it still manages to pack a mighty food punch. With proper homely Spanish cuisine on offer, from light tapas bites to rich meals, the town’s Plaza Mayor main square is the destination for late evening outdoor dining. With the heat staying out until long after the sun goes down, you’ll find late suppers the name of the game. The Corral del Rey, tucked into a corner of the square this tiny restaurant, with a simple but effective menu of four choices for each course, is a must-visit. Start with the the Gambitas al ajillo (accompanied with plenty of fresh bread to soak up all the garlicky deliciousness), followed by the secreto de cerdo ibérico adobado al pimentón de la Vera – local Iberian pork seasoned with paprika (the region’s famous for both).

Trujillo: Where to Visit 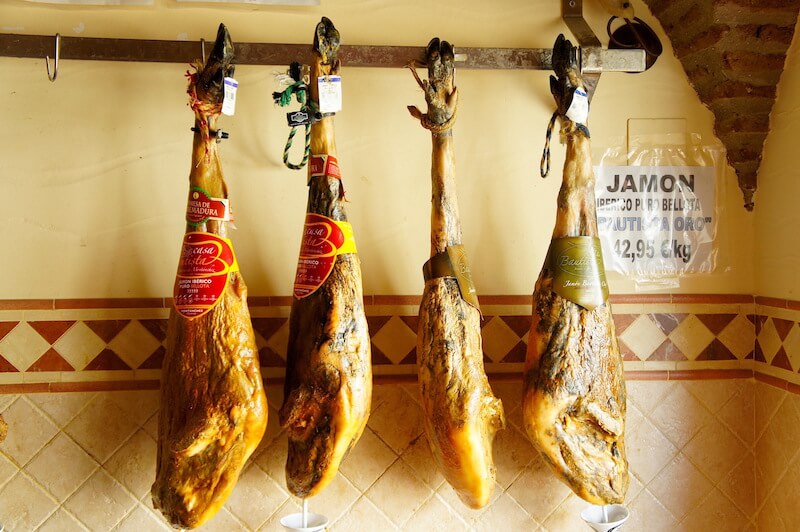 Ever the hostess with the mostest, Trujillo Villas España can organise bespoke guided tours of local foodie attractions for its guests; a trip to Montánchez’ Casa Bautista needs to be on any must-do list. It’s no secret that jamón is Spain’s favourite nibble, and with the majority of the black Iberian acorn-fed pigs from which the nation’s finest jamón is sourced found in Extremadura, Casa Bautista gives a fascinating insight into just what it takes to get these fine swines from field to fork. Founded in 1925, the family-run curing house specialises in jamón Iberico de Bellota, some of the most expensive ham in the world, with an intensely sweet, earthy and nutty flavour that, when carved by hand into translucent slivers, just melts in the mouth. Accompanied with a hunk of Manchego one needs little else for a satisfying starter. A tour of the curing house will show you just how fine an art it is to perfect the process with, of course, a tasting session and opportunity to buy at the end.

Trujillo: What to Do 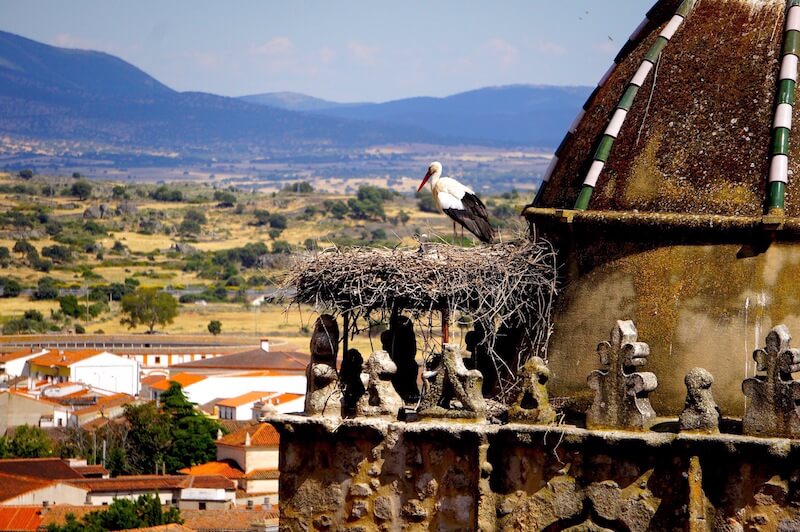 If, of course, the idea of simply reclining on one’s terrace with a bottle of wine and a stack of books isn’t quite enough to keep one entertained, time your visit for early May and you’ll be blessed with Trujillo’s annual Cheese Festival, a four day extravaganza of over 300 cheeses from across Spain. Mostly sheep and goat, the Plaza Mayor undoubtedly assumes a somewhat more pungent aroma during the festivities. If your nose can take it, Trujillo Villas España’s Villa Piedras Albas has the prime view of the main square from its impressive Florentine arched terrace. Deceptively large, it sleeps eight and hides a walled rose garden and swimming pool inside its grand walls. If cheese isn’t your thing, other festivities throughout the year include July’s music festival ‘Ciudad de Trujillo’, regular regional markets and autumn’s agro-livestock fair. The town itself is steeped in history round every corner; Romans, Visigoths, Arabs, Jews and Christians all defined the history of this hilltop retreat full of stories and epic adventures. For an unrivalled aerial view of the town and the Spanish plains beyond, limber up with a climb to the top of the church of Santa Maria La Mayor. Presiding across the Plaza Mayor is a statue of the town’s most famous resident, Francisco Pizzaro, who sailed to the New World, conquered the Inca empire and became the governor of Peru – not a bad track record for a seemingly sleepy corner of southwest Spain. For more details on the Trujillo National Cheese Festival visit here.

Trujillo: Where to Drink 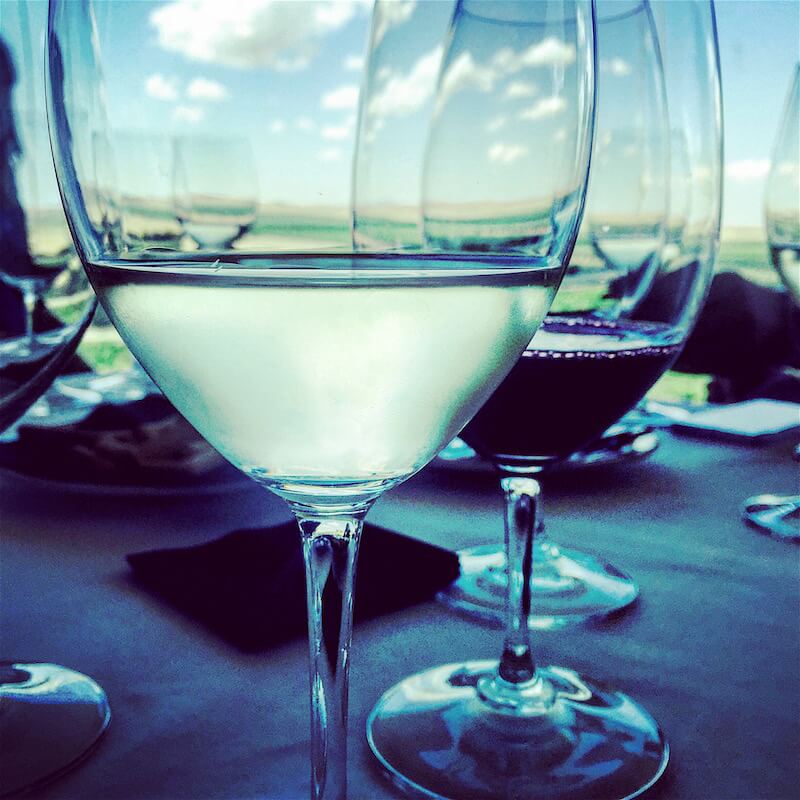 For those baptised in the ways of the grape, you simply must visit local vineyard Bodega Habla. Only established in 2000, Habla produces strictly limited edition runs of its wines, each of which comes with a fascinating story of how it was lovingly created after a number of years trialling which grapes would work in the difficultly acidic, slate-filled, Extremaduran soil.

​The stunningly chic minimalist branding is akin to an haute couture fashion house and what’s inside the bottles doesn’t disappoint. While a number of past wines are now sold out, we went home with a bottle of the refreshingly crisp Habla de Ti, a dry white sauvignon blanc. Side note:  Trujillo Villas España can arrange a guided tour of the vineyard for guests of their villas. ​

Trujillo: What to See 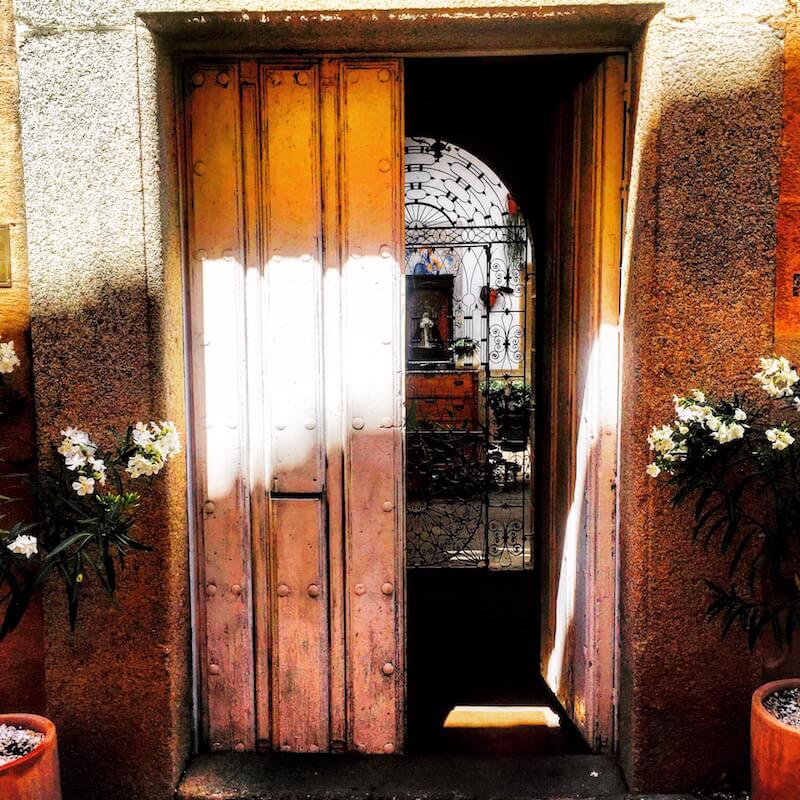 45km from Trujillo lies the town of Cáceres. A UNESCO World Heritage Site since 1986, Spain’s Capital of Gastronomy in 2015 and shortlisted as the EU’s European Capital of Culture for 2016, it boasts an impressive CV. The magnificent old quarter – closed off to traffic – is rich in 15th and 16th century palaces, alongside towers from the Muslim era and a fascinating Jewish quarter; you can easily lose yourself for a day just mooching around the bougainvillea-draped cobbled streets, spotting the ancient Arab walls and dipping in and out of churches. Just outside the town you can find the Palacio de Arenales Hotel & Spa, housed in a 17th century building surrounded by olive groves and the perfect pitstop for a day of pampering.

Trujillo: Where to Eat 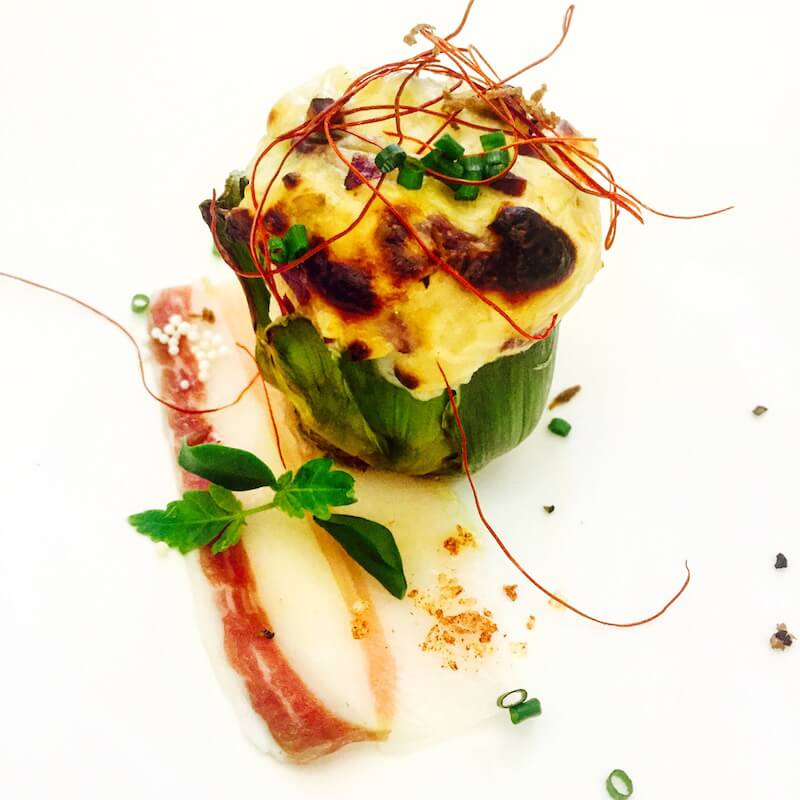 Cáceres has no shortage of amazing eateries to seduce even the most snobbish of foodie; it’s easy to see why it was voted Spain’s Capital of Gastronomy last year. Amongst the winding streets lies the two Michelin-starred Atrio, which not only boasts incredible cuisine, but an unrivalled wine cellar. Seriously, over 34,00 bottles. With every bottle in its cavernous cellar available on the wine list – which is bigger than most average encyclopaedias – the oldest bottle in situ dated from 1806; probably fairly pricey. 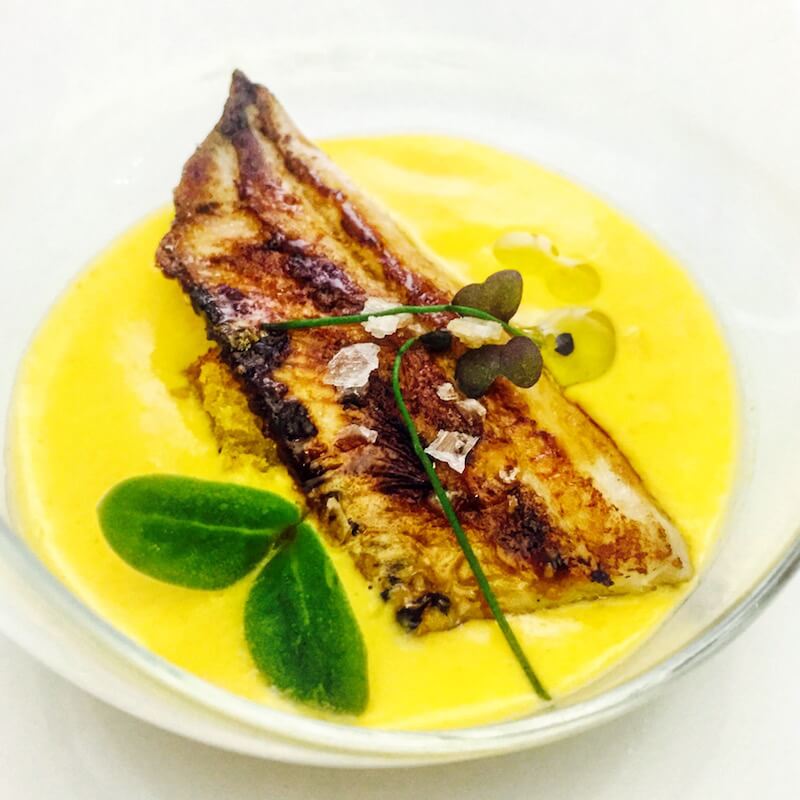 Around a cobbled corner sits the charm of La Cacharrería; part tapas bar, part restaurant, part cabinet of curiosities, this fascinating little world lies through a wrought-iron gated courtyard on a sun-drenched side street. If you can tear your eyes away from the cases of butterflies, statues of the Virgin Mary and cupboards full of knick knacks (all of which are available to buy) the food is an absolute dream. Tastebuds will be wowed with gems like grilled sardine with gazpacho and wild garlic, local black pudding gyoza, artichoke hearts filled with béchamel sauce, local ham, mushrooms and saffron, and a succulent piece of cod accompanied with bitter orange marmalade, scrambled egg and spinach, in a filo parcel. Bookings: +34 927 10 16 79

If you’re a fan of delicious discoveries, you need to book yourself a trip to Trujillo. You won’t regret it. 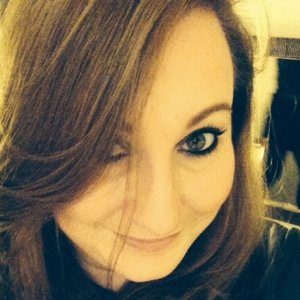 Laurel is a freelance PR, writer and sewing teacher with a love of travel and a penchant for gin. When not writing or holidaying she loves spa breaks, making herself new clothes and watching musicals. Follow Laurel’s musings on Twitter and Instagram @LoveLaurelx