Rising far to the southeast in the Massif Central, the Loire is France’s longest river.  It’s a wonderful area to visit with a gentle landscape and soft light. Along the banks of the tributaries Indre and Cher, the Loire Valley contains many glorious châteaux that are amongst the most impressive works of architecture in France. They date from the 16th century onwards, at a time when Renaissance ideas were being introduced and the epoch of great château building began.

When visiting the Loire a good starting point is Chambord, where the château, built by Francoise I in 1519, is set in the extensive enclosed forest of Sologne. Of special interest are the gardens, recently restored with painstaking historical accuracy through a generous gift from the American philanthropist Stephen Schwarzman, which can now be enjoyed for the first time in many centuries.  These formal gardens link the château with the forest and are quite magnificent.  The château itself is perhaps most famous for the beautiful white limestone staircase at its very centre. Formed of a double helix attributed to Leonardo da Vinci, it leads to the roof terrace, where the King and his entourage spent time watching chivalric tournaments, or the start and return of the hunt.

While at Chambord perhaps stop for some refreshment either at the Café or enjoy a (comprehensive!) biscuit tasting with interesting local wines and local specialities – much recommended for gifts – at the adjoining famous Biscuiterie de Chambord.

Close by is the delightful village of Montivault, where you can tuck into a highly recommended dinner at the well known La Maison d’à Côte.  Run by the chef and owners Christopher and Emmanuelle, this classic restaurant, with rooms where you can overnight, is beautifully quiet and tucked away in the picturesque French countryside.

From Montivault it’s an easy drive along the Loire (don’t miss the sight of the flat bottomed wooden fishing boats anchored among the reeds) to Blois.  Blois is situated at a point on the Loire where the limestone landscapes around Orleans give way to the chalk country of Touraine downstream, (wonderful for wine growing).  The town itself was transformed from 1503 onwards when the King moved there from Amboise. The Château of Blois is a unique example of the development of French architecture from the 13th through to the 17th century, each period reflected in one of its four wings.  From the grand courtyard which they form, it’s possible to see once again a magnificent double staircase, this time on the outside of the building (in contrast to Chambord) created so that the King could be seen much more directly by his courtiers. 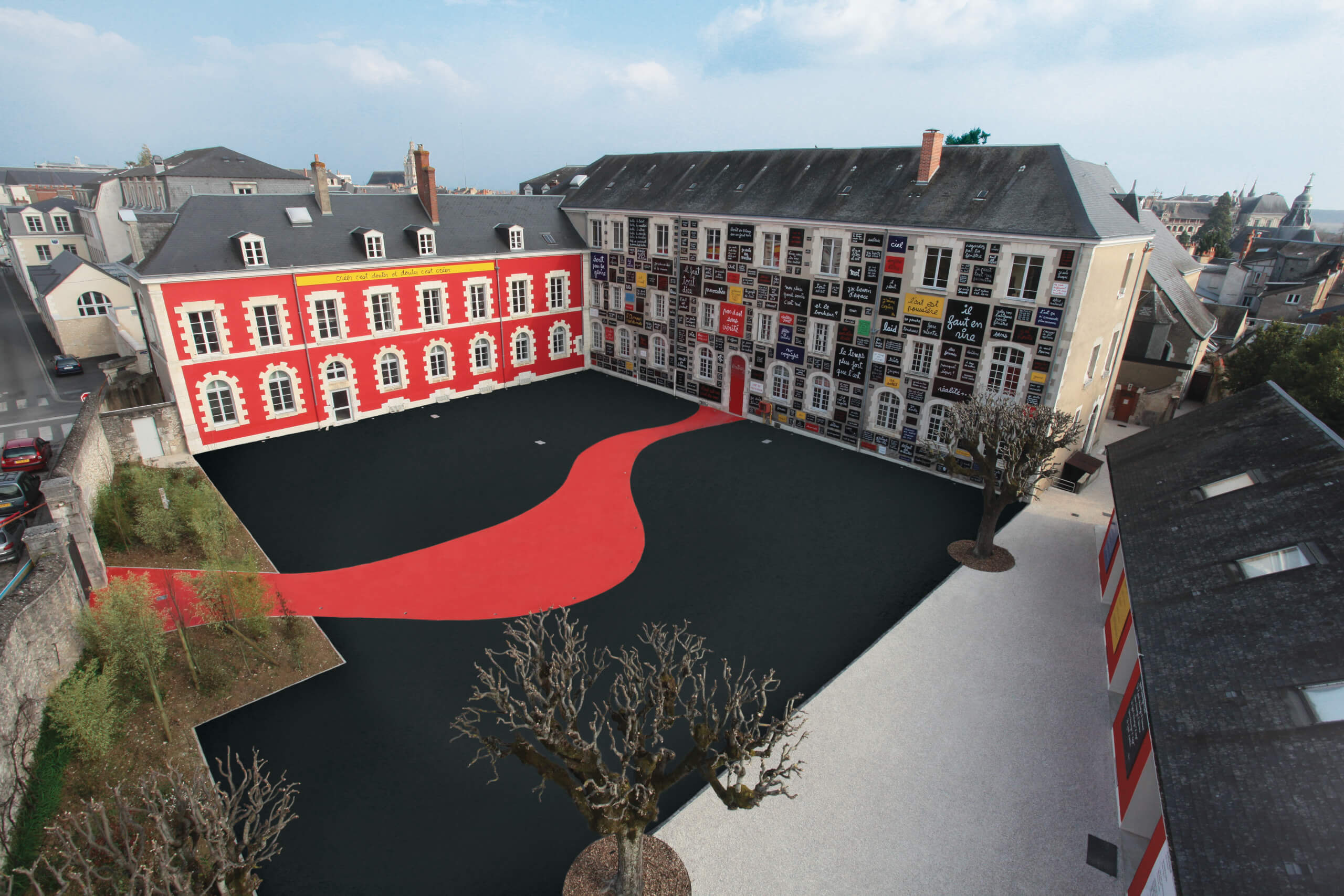 While in Blois – in complete contrast to the royal Chateaux of Blois – is the Foundation of Doubt at 14 Rue de la Paix. It’s dedicated to the Fluxus art movement, perhaps more a ‘state of mind’ than a movement, drawing on radical elements of the Western tradition, including Dada, Cage’s concept of performance, with references to emerging technologies and science. Its name was coined in the 1960’s by a Lithuanian, George Maciunas. Fluxus includes such well-known artists as Yoko Ono, George Brecht, Nam June Paik and Joseph Beuys. The Foundation of Doubt was created by Benjamin (aka ‘Ben’) Vautier in 2013. At the entrance, displayed on the façade of the building, you will encounter the ‘Wall of Words’, a retrospective created by Ben consisting of 300 panels of his most celebrated text-based paintings.  The comprehensive Fluxus collection the Foundation contains has been assembled by Ben and Gino Di Maggio, with the collaboration of the Mudima foundation of Milan, Caterina Gualco and other artists. It has to be stressed that this is in no sense a museum, but a space created to facilitate creation and meeting between different publics.  The concept is one of fluidity resulting in a fascinating arena for different artists and ‘happenings’.

There is a lot to see and absorb in this exciting space and if ‘happenings’ are your thing grab a coffee in the café and soak up the atmosphere.  After the complexity of Fluxus, enjoy the pleasure of a light lunch at the nearby restaurant L’Hôte Antique at 5 Rue Pont du Gast, which is very close by the Foundation of Doubt, and very good. 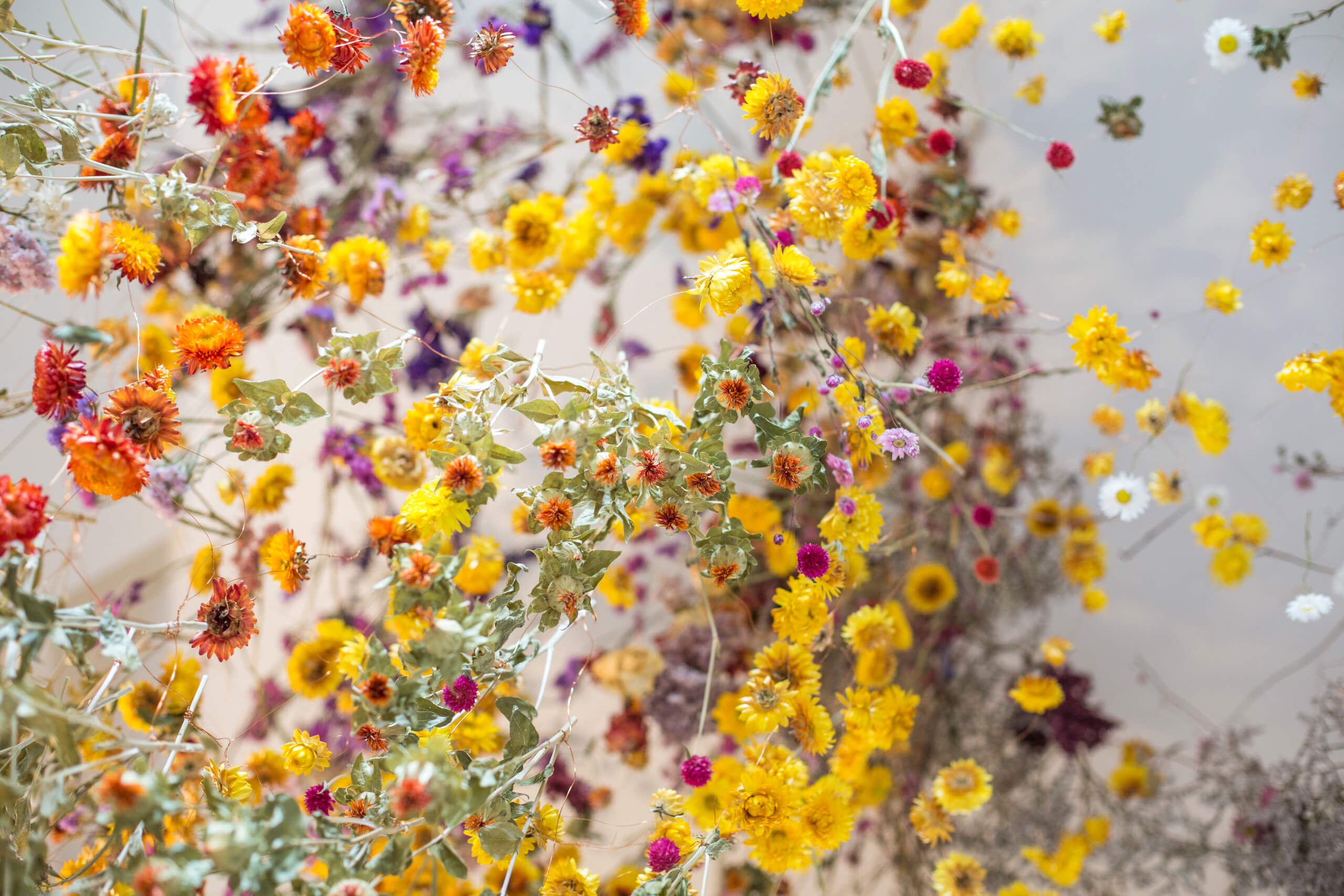 After lunch a visit to nearby Domaine Régionale de Chaumont-sur-Loire is a treat.  Chaumont was constructed around 1465 and when work originally began it had many elements of a defensive castle but interestingly, over time, developed into the style of a beautiful Renaissance chateau.  The appearance of the Chateau, originally in the Gothic style was later transformed into a Gothic-Renaissance style.   Take a tour around the château with its very large and spacious rooms hung with magnificent tapestries, and finely crafted floors. Listen to its fascinating history including the story of Catherine de Medici’s residency, before she moved her court to Château Chenonceau.  For contemporary art and garden lovers alike the spectacular summertime garden festival is a must.  Now in its 25th year Chaumont is linked with the UK’s Chelsea Flower show.  The landscaped grounds are a relatively recent creation and this year twelve new artists will be exhibiting at Chaumont for the 9th art season which every year celebrates the link between art, nature and heritage.  This remarkable panorama of international landscapes filled with contemporary installations is both fascinating and entertaining for visitors.

When leaving Chaumont for Amboise, look out for the Château Amboise, high above you and resplendent on the hillside.  The Château was part of the golden age of Amboise and the birthplace Charles VIII in 1570.  Arriving in Amboise a  most welcoming stay awaits at the Hôtel Le Clos d’Amboise, with crackling fires in the drawing rooms and its own restaurant, located at 27 Rue Rabelais.

Very recently inaugurated in Tours in the Jardin Francois is the new Contemporary Art Centre Olivier Debré (CCC OD). Established through an endowment grant by the abstract painter Olivier Debré (1920 – 1999), it was his wish that his work, in the form of this bequest, be part of a permanent space.  The bequest is a comprehensive collection of his work inspired mainly by the landscapes of Norway, a destination he travelled to frequently. The Centre was opened in March by Francoise Hollande, the President of France, and attended by Her Majesty, Queen Sonja of Norway.  The building was designed by the Portuguese architectural practice Aires Mateus and was built on the site of the original Tours art school. It’s a centre open to temporary installations by visiting artists, unique of its kind in supporting itself from the proceeds of this bequest from Olivier Debré.

Debré himself was a very physical painter of immense spaces depicted on huge canvases.  He was a member of the French Academy who had moved from figurative work to abstraction in the tradition of colour field painting. In addition to Scandinavian landscapes, he took much of his inspiration from the Touraine region and the Loire Valley, so the location of the gallery in Tours is particularly pertinent.  The collection of 2008 is made up of five large scale oil paintings measuring 4 x 9m.  It also includes 150 drawings and a permanent loan of 140 paintings.  The centre itself is made up of three distinct exhibition spaces, a white gallery, a black gallery and finally a transparent gallery.

Tours itself became the capital of France under Louis XI.  Throughout the Middle Ages it was an important religious centre and still has a magnificent old sector with many fine medieval half timbered buildings. This is a wonderful place to wander, explore and relax with its many bars and cafes all around.  After a busy day sightseeing, a good hotel to consider is the centrally located Hotel Oceania L’ Univers located at 5 Boulevard Heurteloup. Have fun visiting La Galerie du Livre D’Or in the main lobby and look at the very extensive list of people who have stayed here including Winston Churchill, Sarah Bernhardt and Ernest Hemingway amongst many others.

For a stroll and dinner, visit Le Bistrot de Belles Caves located on 23 Rue du Commerce.  This is a great meeting place with an extensive wine list of local Touraine wines to taste.  Dining in their adjoining restaurant is recommended. 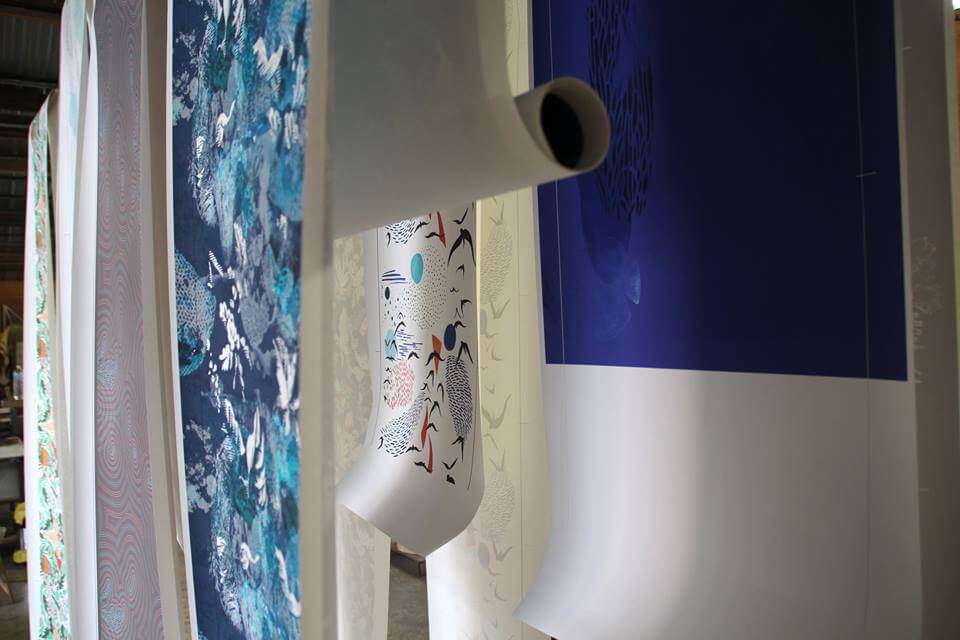 Finally a visit to Tours would not be complete without a visit to the Atelier d’Offard workshop and factory. Created in 1999 by Francois-Xavier Richard, it revives the production of hand-blocked wallpaper using the techniques of the 18th and 19th centuries. This is a fascinating place to explore (by appointment only) and specialises in the making and restoration of ancient wallpapers.  (When I visited they were making wallpaper for Mozart’s bedroom in Salzburg!). To get there, use the famous Tours tram, direction Tranchée.  The workshop is located at 21 Avenue Maginot.

The Loire Valley can easily be accessed by direct flights from the UK and is less than two hours away, get booking.

Caroline Patterson is Deputy Arts Editor at About Time. A successful Abstract Artist and Ex-PR woman she has degrees in Social Anthropology and Fine Art. She loves to travel the world experiencing different cultures and meeting new people.