Fredericksburg isn’t actually part of Copenhagen. You’ve probably heard of Christiana – the self-proclaimed anarchist autonomous territory where weed is legal. But Frederiksburg is an independent municipal district, a formal royal residence and famed for its affluence. There are no tourist or stag dos here; imagine Kensington Palace Gardens if the Round Pond was dotted with joyous ice-skating children. 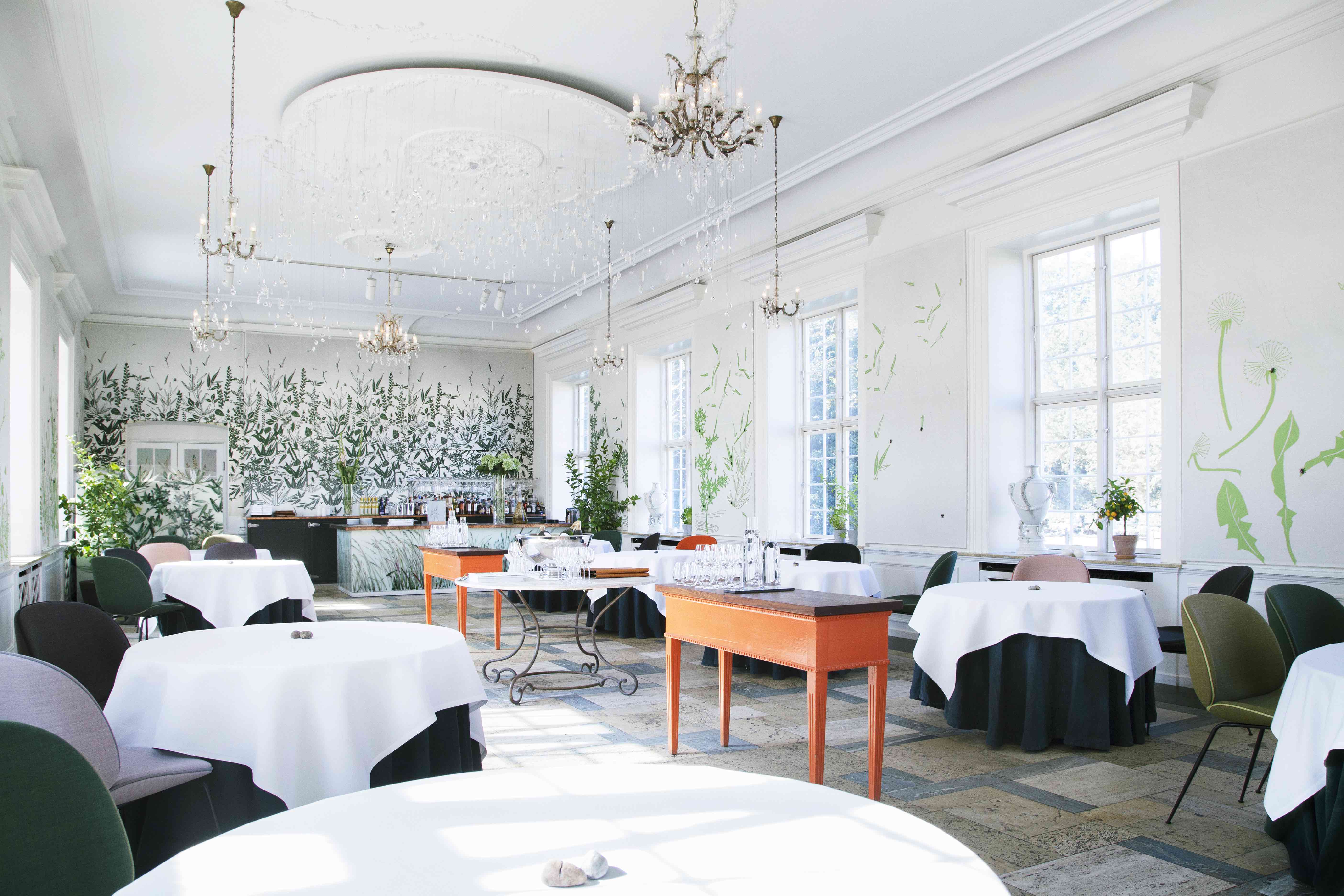 We walked down the Frederiksburg equivalent of Billionaires Row, past the chirping skaters and into the gardens of Mielcke and Hurtigkarl. We took our space at the base of the restaurant, and looked around to see the blue-flecked chandeliers and the vines climbing the walls and we knew we were in for something special.

Last night’s smoked almonds were impressive, but these four servings were so comically undersold as ‘snacks’ that I wondered whether it was tongue in cheek. 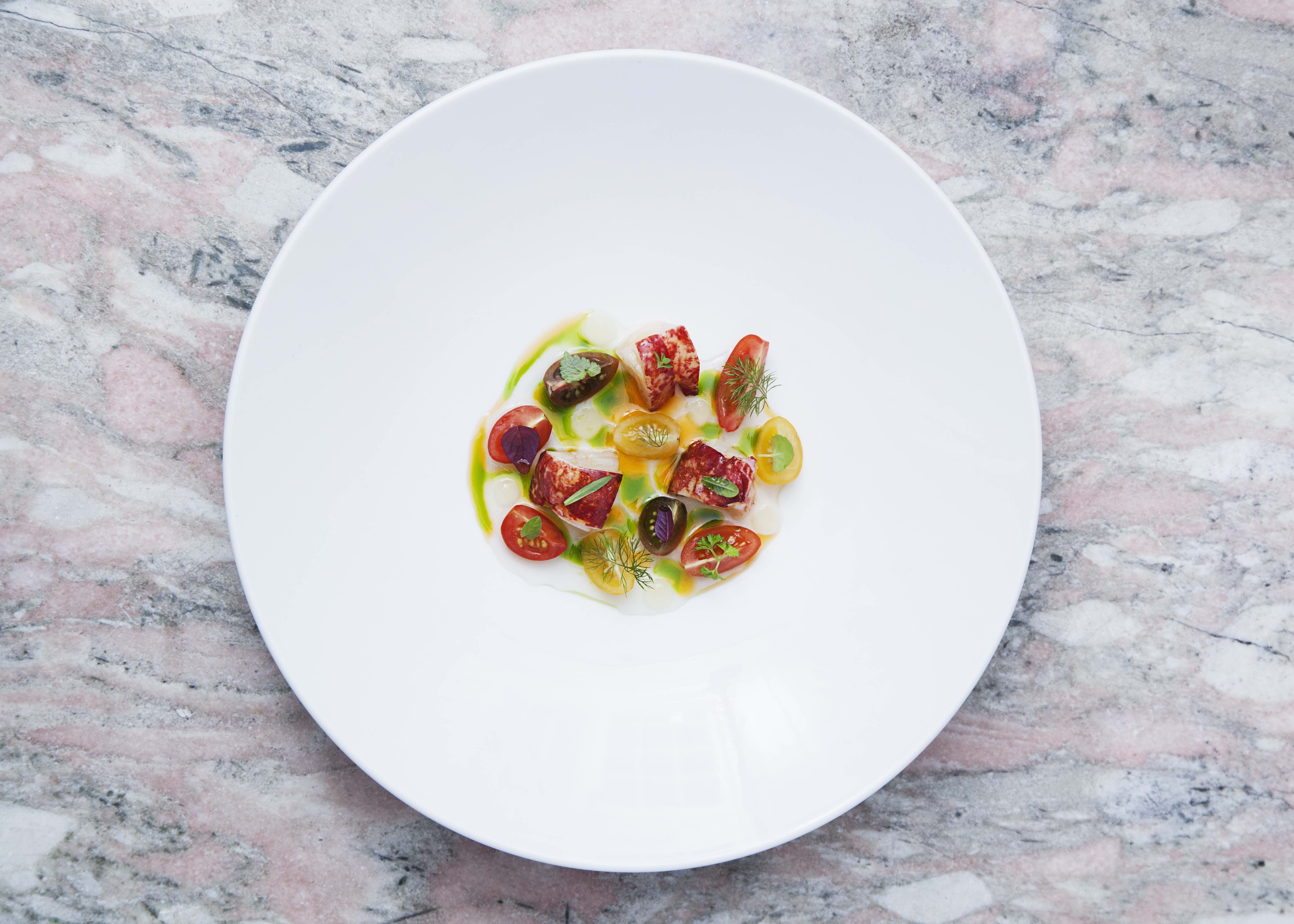 And on that note after finishing the first snack, our tongues were searchlights scouring our mouths for every last miniscule  morsel of this exceptional dish. The frozen tomatoes with basil, elderflower and a pecorino foam was a textural masterpiece. The acidity of the tomatoes, numbed by the temperature were accompanied by the lightest soft cheese foam. It’s worth going to Copenhagen just for a few mouthfuls of this ‘snack’ My evening snack of choice are frozen treats and this dish is a considerable upgrade on the multipack of Co-op rocket lollies I keep in the freezer. 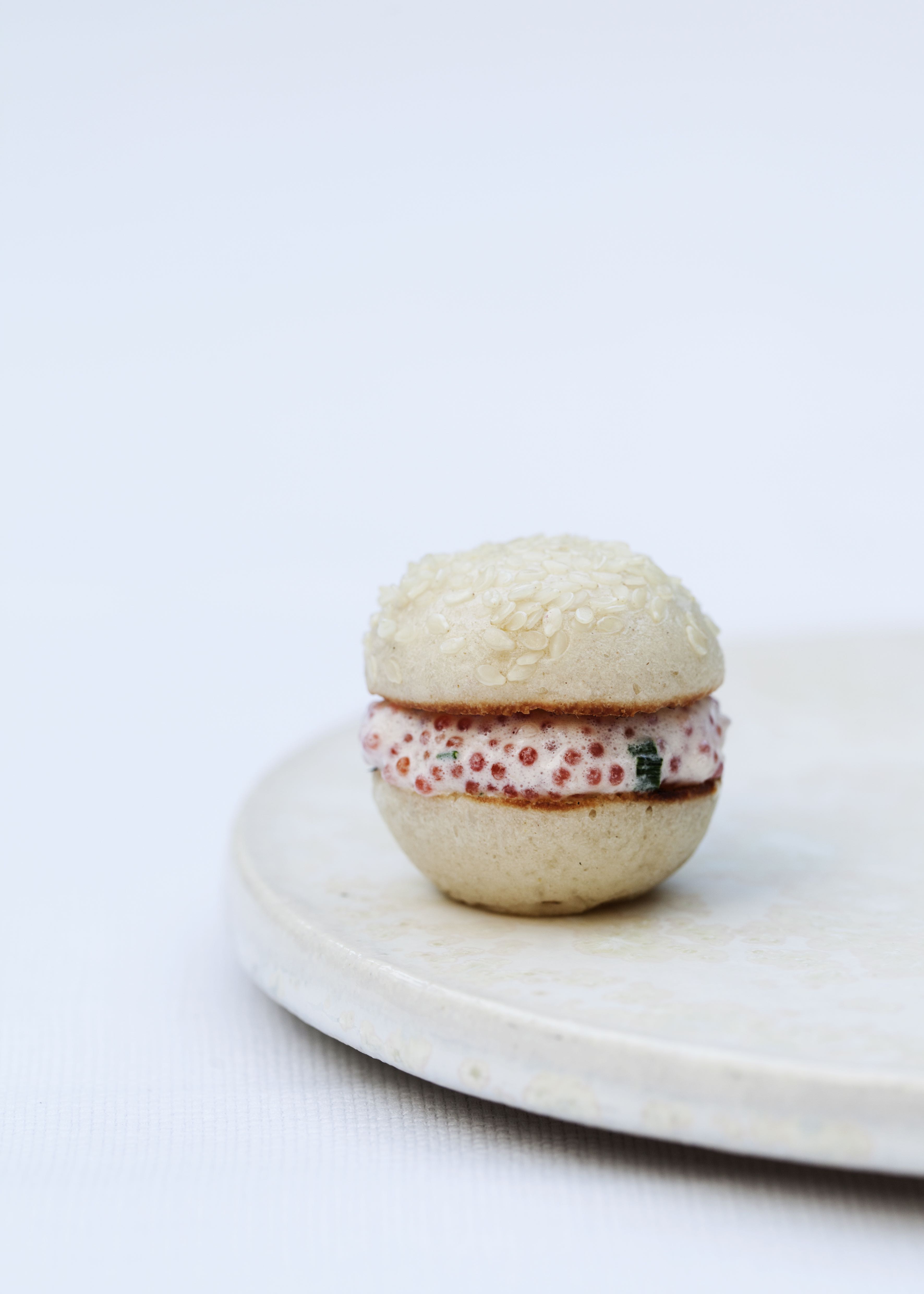 This was followed by a tiny baguette – a single bite of chicken liver and sorrel between a crisp meringue-esque bread then a shiso and kaffir lime langoustine, which we felt was the one and only let down moment in the fourteen courses. We were salivating over the duck, goose and pork melt-in-the-mouth charcuterie, which had been hunted and prepared by executive chef and owner, Jakob Hurtigkarl. 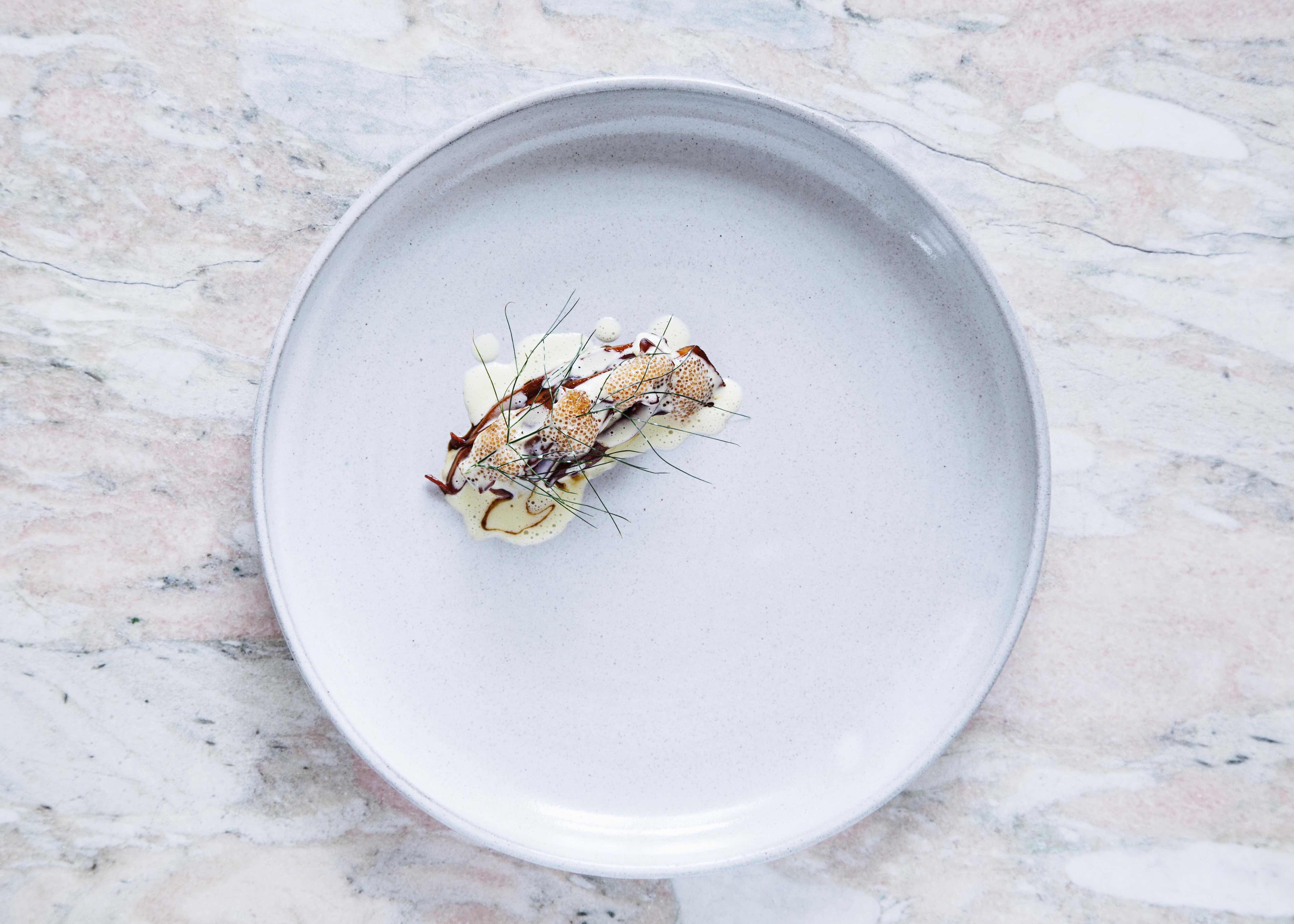 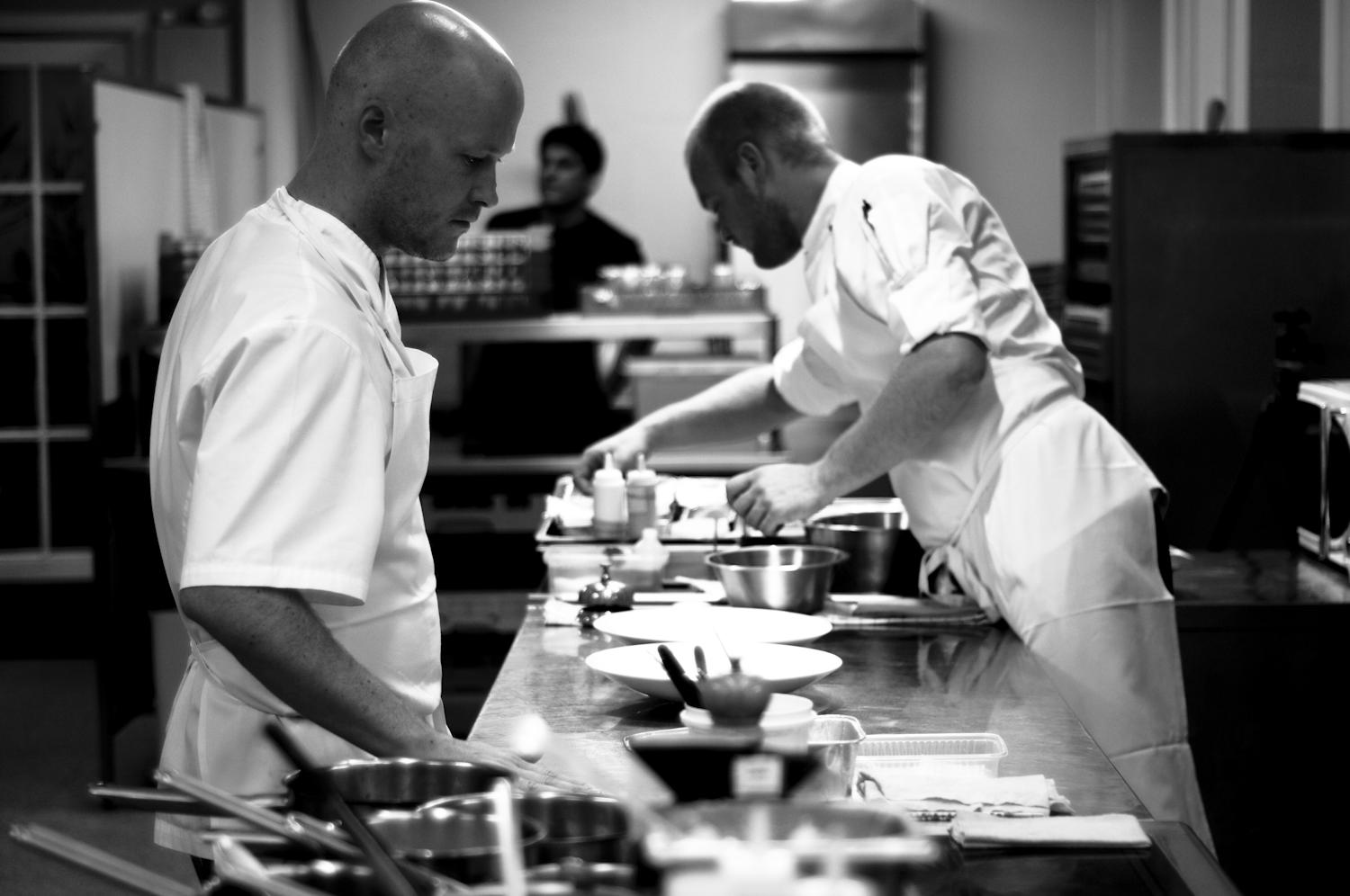 Jakob was this mystical presence throughout our meal; he’s a hunter, gatherer, chef, Masterchef judge and a true celebrity of Nordic cuisine. I imagined him as his namesake in the noughties television mega-hit, LOST. Jakob was this powerful spirit character capable of healing, omniscience and mastery over the plants and the animals. Jakob oversees the Royal Horticultural Garden of Frederiksborg rather than a fictional shifting island in the mid-Pacific so the differences are certainly there, but I still felt like we were enjoying the fruits of the labour of a brilliant man.

During the snacks, we drank Champagne Marguet Rose Grand Cru, which was certainly my favourite pairing of the evening. The wines were presented to us by general manager, Thomas. It’s one the best traits in any person when they speak to you on their area of super expertise as an equal and Thomas oozed enthusiasm and grace in equal measure. 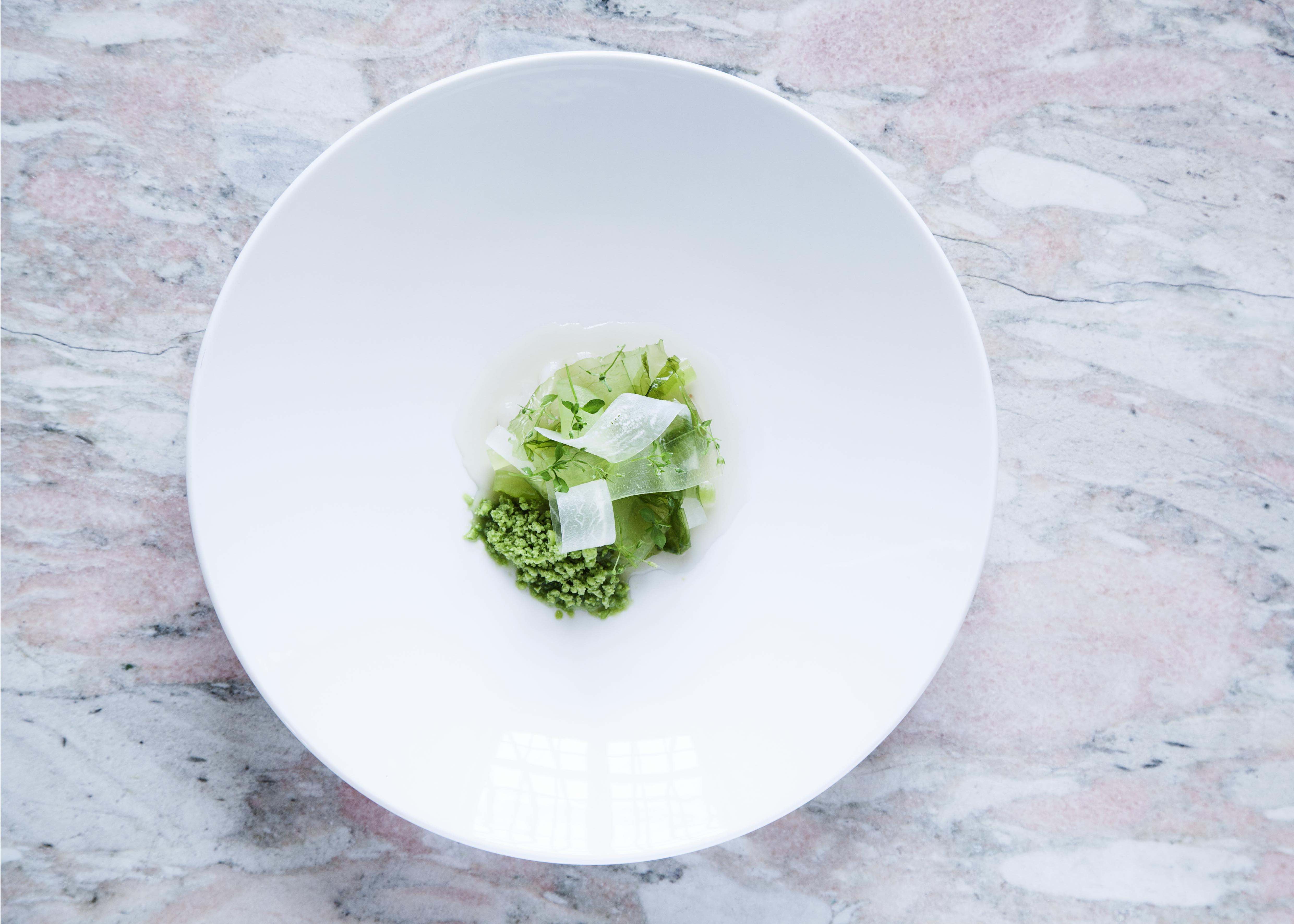 Five paragraphs in and we’re ready to talk about the first course of Norwegian scallops with fennel and frozen green strawberries. This tart winter dish was enhanced by the chilled plates. This was followed by green squid served in a bowl of seashells and a side of the best bread and butter known to man. The butter had been infused with cress parsley and other herbs picked fresh from the garden just outside.

The real showstopper was a surprising entry from one J. Artichoke – the high water content in the artichoke created this wonderful crunchy texture – and this paired with a rich creamy sauce was just sublime. 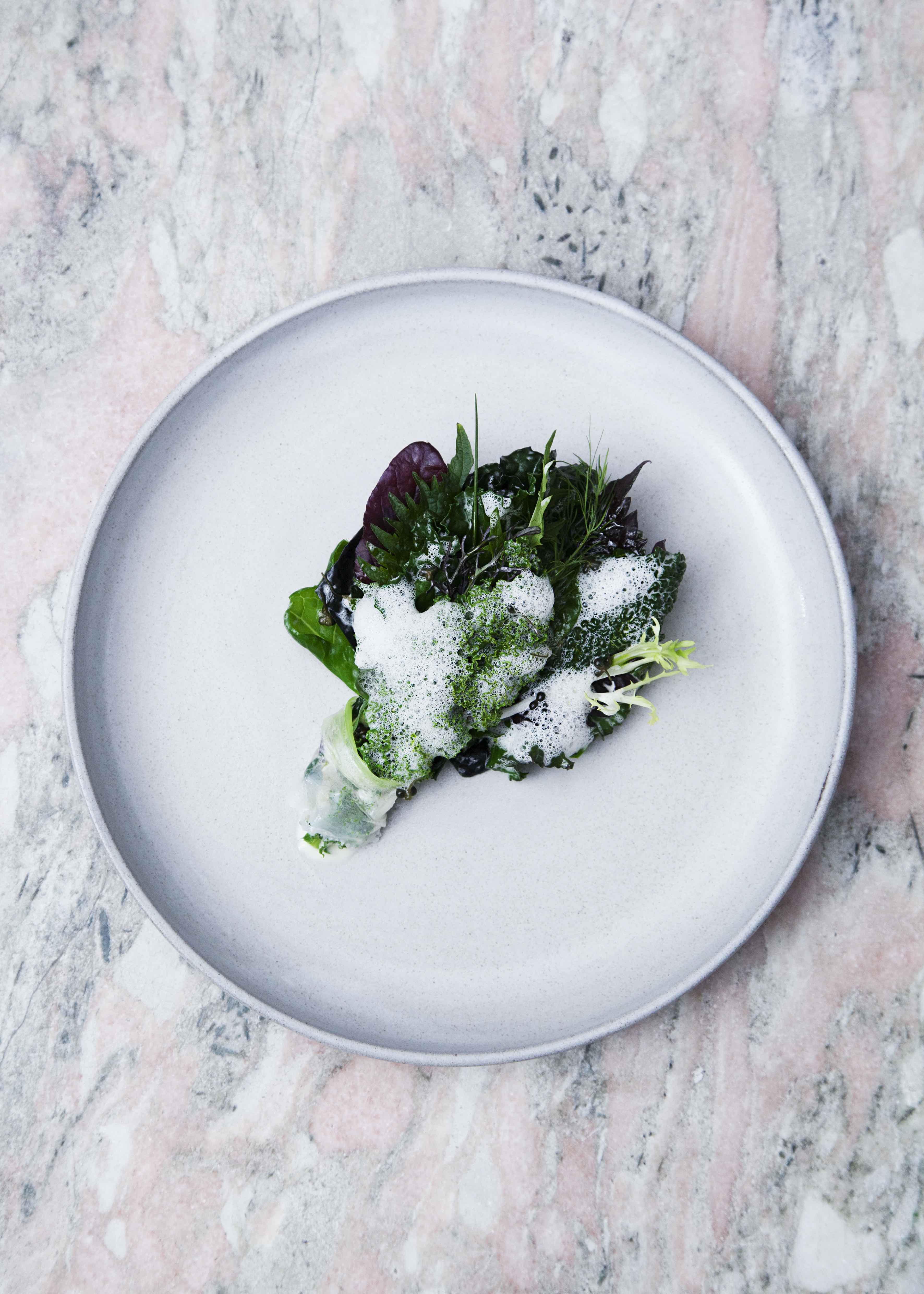 By this stage, we had become rather fascinated by the couple on the table next to us. They were journalists. Well, at least one of them was. He was wearing a bowtie and a velour blazer. She was writing copious notes. They were under siege from additional glassware containing diminishing quantities of high quality nectar.

“Are you journalists?” I asked.

“I am”, he said. “My wife is just taking the notes this evening.”

He was one of the foremost food critics in Copenhagen and had reviewed M&H twice before. They had just had their first child and this was their first date night together since the birth. Of course, they had come back here.

“For me, this is the best restaurant in Denmark. Better than Noma. It has become a running joke that this place doesn’t have a star. It’s because Jakob takes risks that no starred restaurant ever would. Twelve courses will be perfect Michelin standard, he will take a risk on the thirteenth – it may not work – and that’s where the star is lost. But we would rather eat here in an unstarred restaurant in our town, than pay fifty euros per course in an unimaginative Parisian restaurant with two or three stars.” 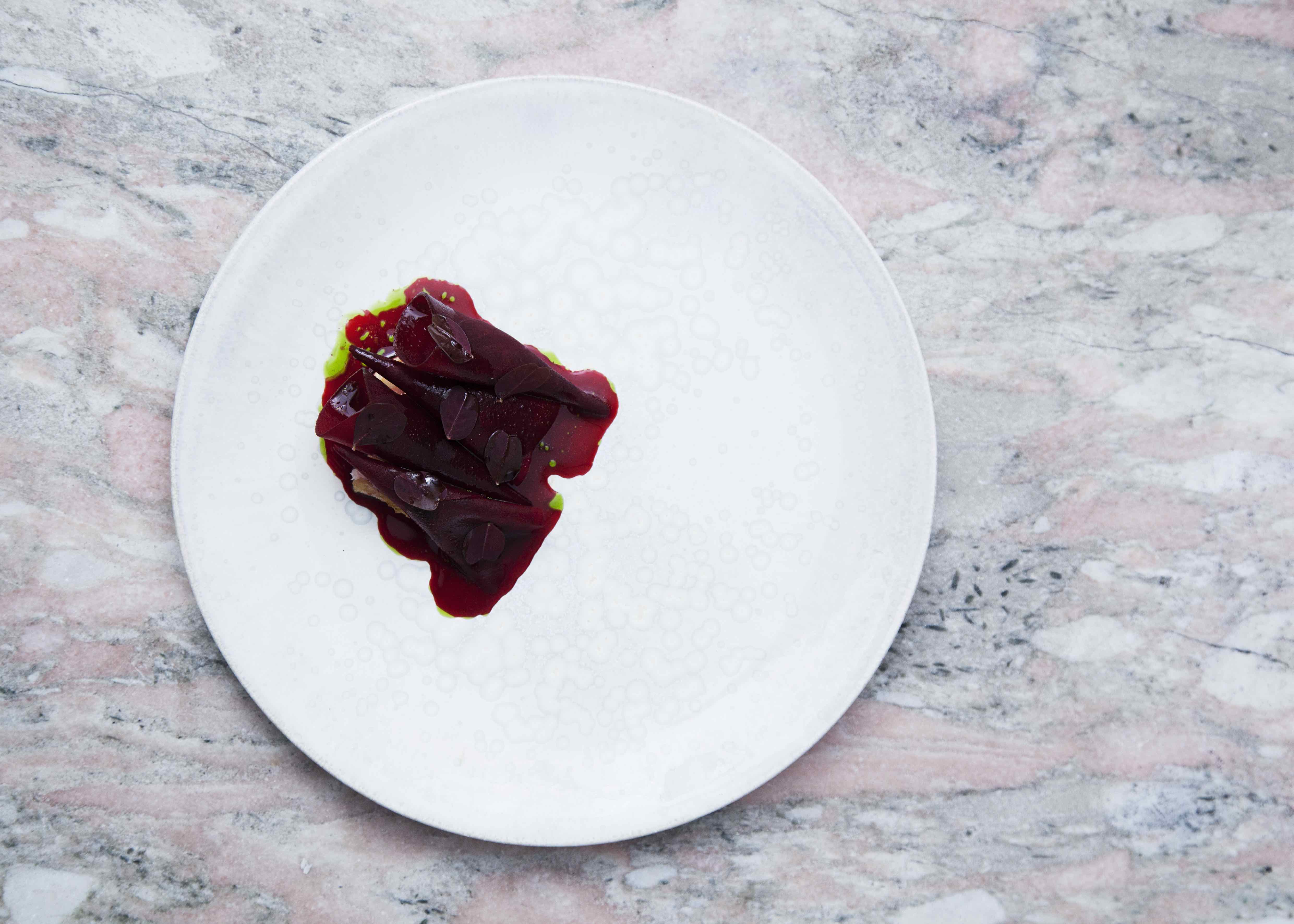 A game pie arrived with the the pastry cooked to perfection. The reds of the meats swirling with the purples of the beetroot puree created a rich visceral image to accompany the ample taste of the layers of pigeon and duck.

And after three hours we were on to the desserts! A Swedish cheese course arrived first with finely grated truffles which was reminiscent of a childhood memory of tobacco. Alongside this was a croissant with raspberry jam and blue cheese, which, being the only possible flavour combination an amateur chef could possible hope to imitate, has become our indulgent breakfast for the week. 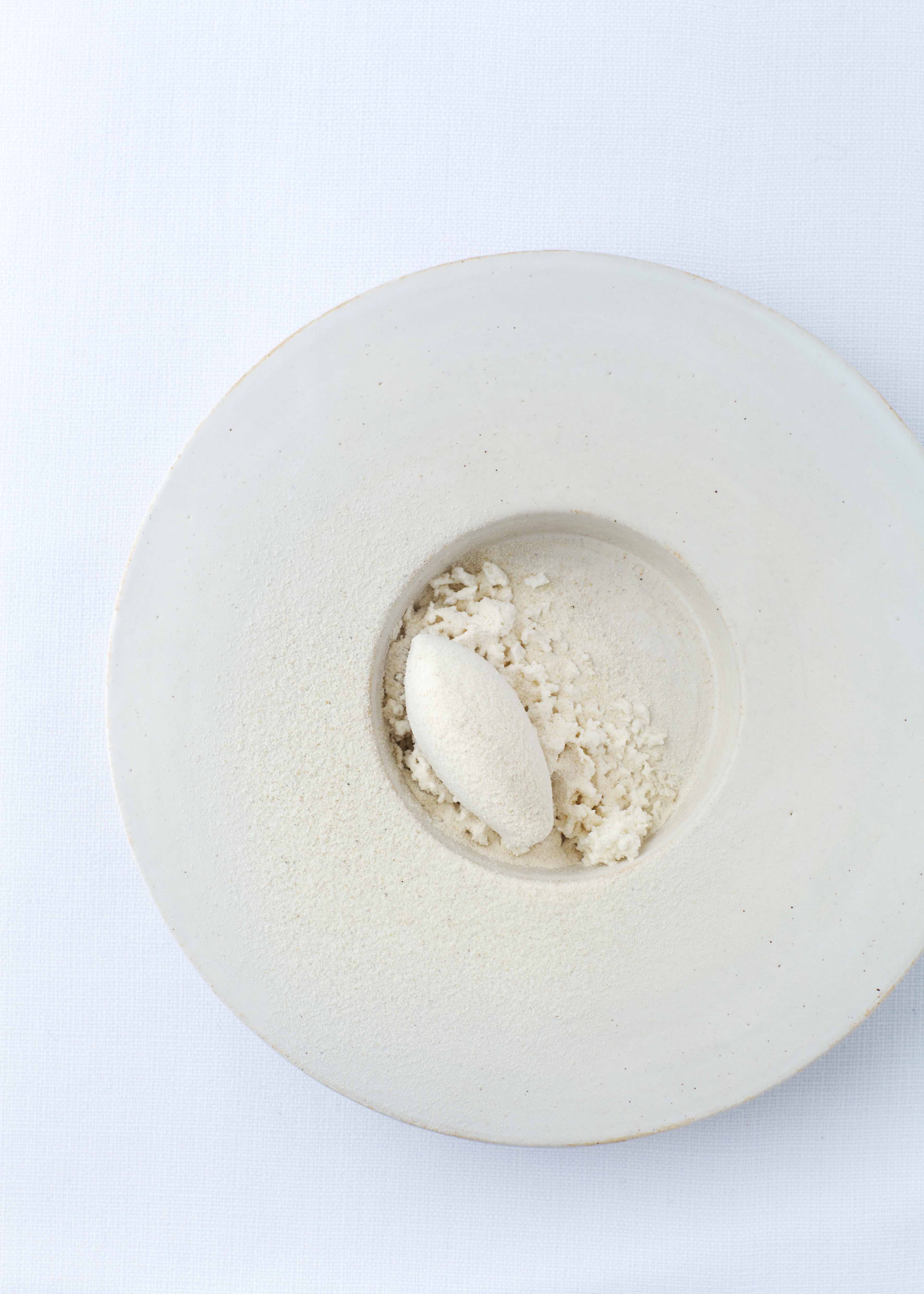 Three desserts followed. No, not a trio of desserts on the same plate, but three full separate plates. The highlight was the ice cream with this salty sesame foam, seeds, soy paste and puffed rice. It was just so inventive and a textural delight.

At the end, we were presented with the menu for the night and inscribed on the front was a quotation, “The menu is not the meal.” With a menu this exceptional, the meal would be more than enough, but this was true of M&H. A pinned weight appeared instantly to hook on a handbag; a portable phone charger was provided instantly. The restaurant felt relaxed – not dogmatic, but curious. The staff changed roles throughout the evening representing the fluidity, but this just made the precision of the menu and the meal more impressive. 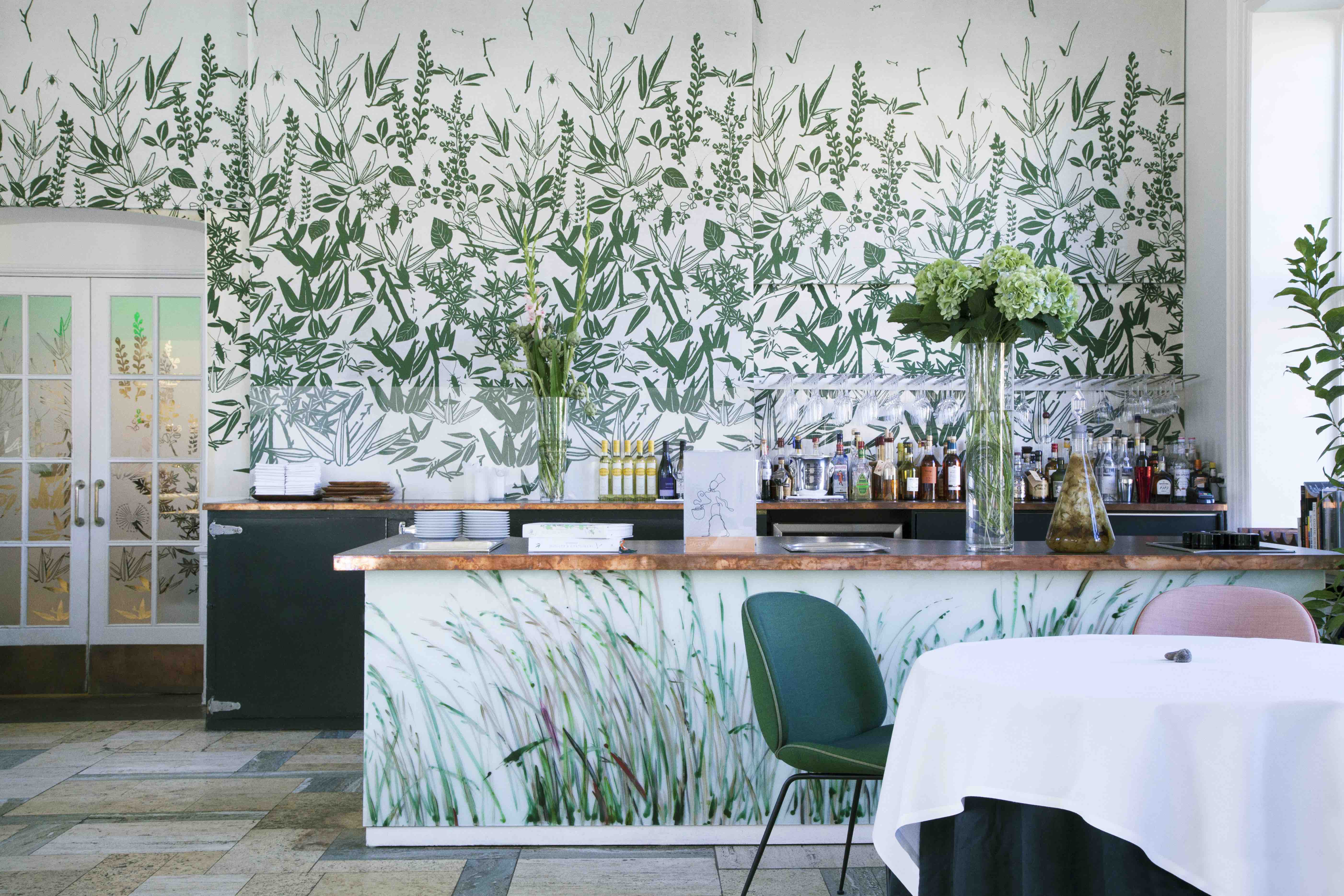 The service was provided with the charm of socialites, but with the discipline of an army regiment. Each individual bathroom cubicle has its own theme, whether it be a butterfly house or a cascading waterfall – even freshening up became a transportational experience.

If you are looking for Michelin-star food at an affordable price, it’s worth flying to Denmark just to visit this restaurant. It’s that good. It’s unforgettable.

There are a range of tasting menus ranging from DKK 800 for the ‘Daily Experience’, DKK 950 for ‘The Experience’ or DKK 1,100 for ‘The Metamorphosis’ and the wine pairing differ depending on your number of courses.