What better way to celebrate giving up all things gluttonous and saccharine for the entire six weeks of lent (too optimistic?) than to slam dunk clotted cream, bread and chocolate back into your diet in one sitting.

Afternoon teas have been enjoying a somewhat popular resurgence of late, with many city hotels offering their own versions to varying degrees of indulgence. This Easter, forgo that Cadbury Buttons egg for something slightly more decadent. Here our favourite Easter-themed afternoon teas around the UK: 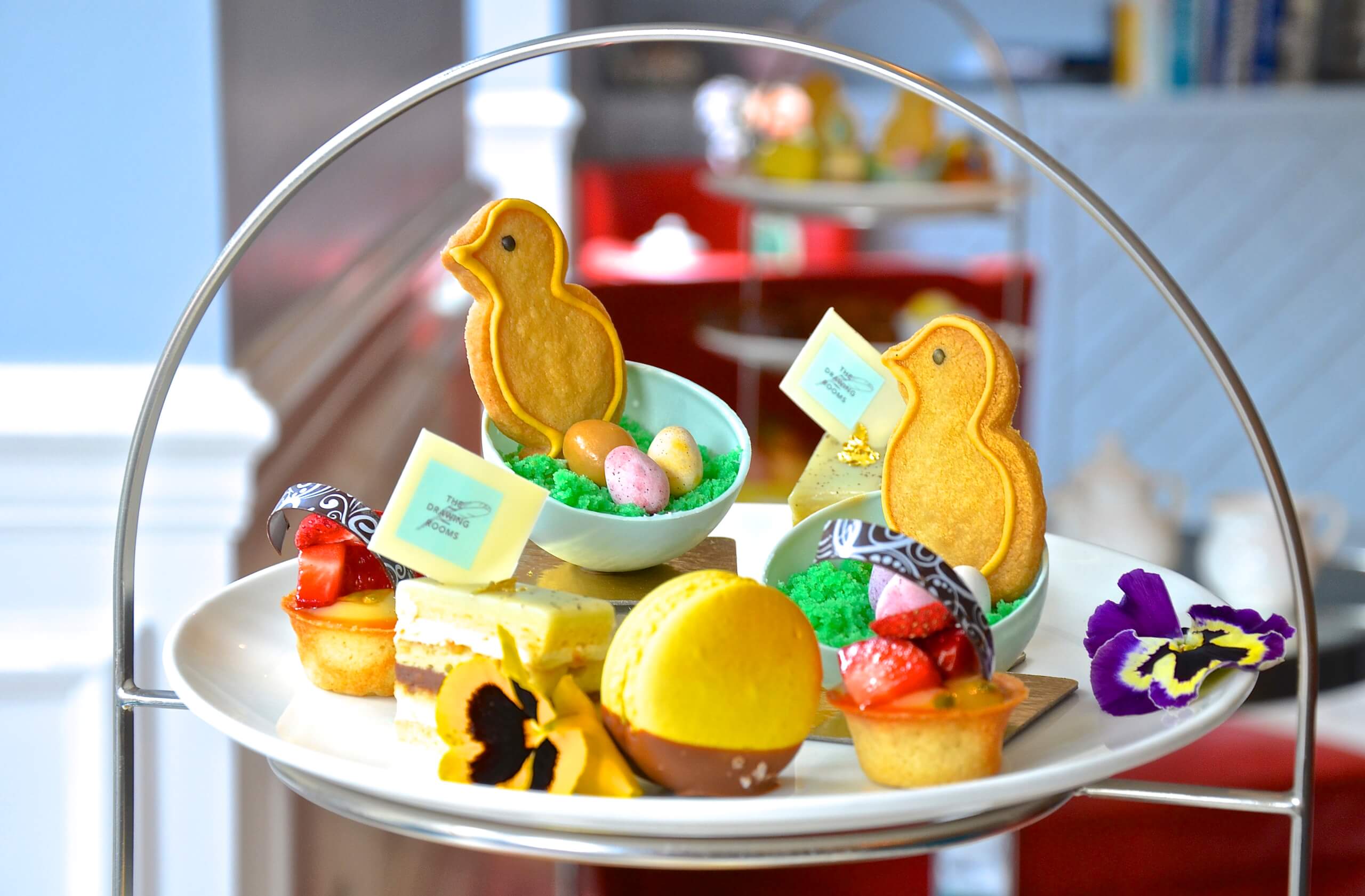 Boutique South Kensington hotel The Ampersand opened to much fanfare in 2012 – and for good reason. Its creators took inspiration from the nearby Science and Natural History museums to develop an interior that lends itself to botany, astronomy and geometry themes.

Pastry chef Ji Sun Shin is laying on a feast of an afternoon tea with savoury gougères including smoked salmon, dill and cream cheese, in addition to Easter bread, chocolate eggs and even nests.

Tea is £32.50 per person or £44.50 per person with a glass of champagne. However if you book online you’ll receive a complimentary glass of bubbly for bookings on Mon-Fri. 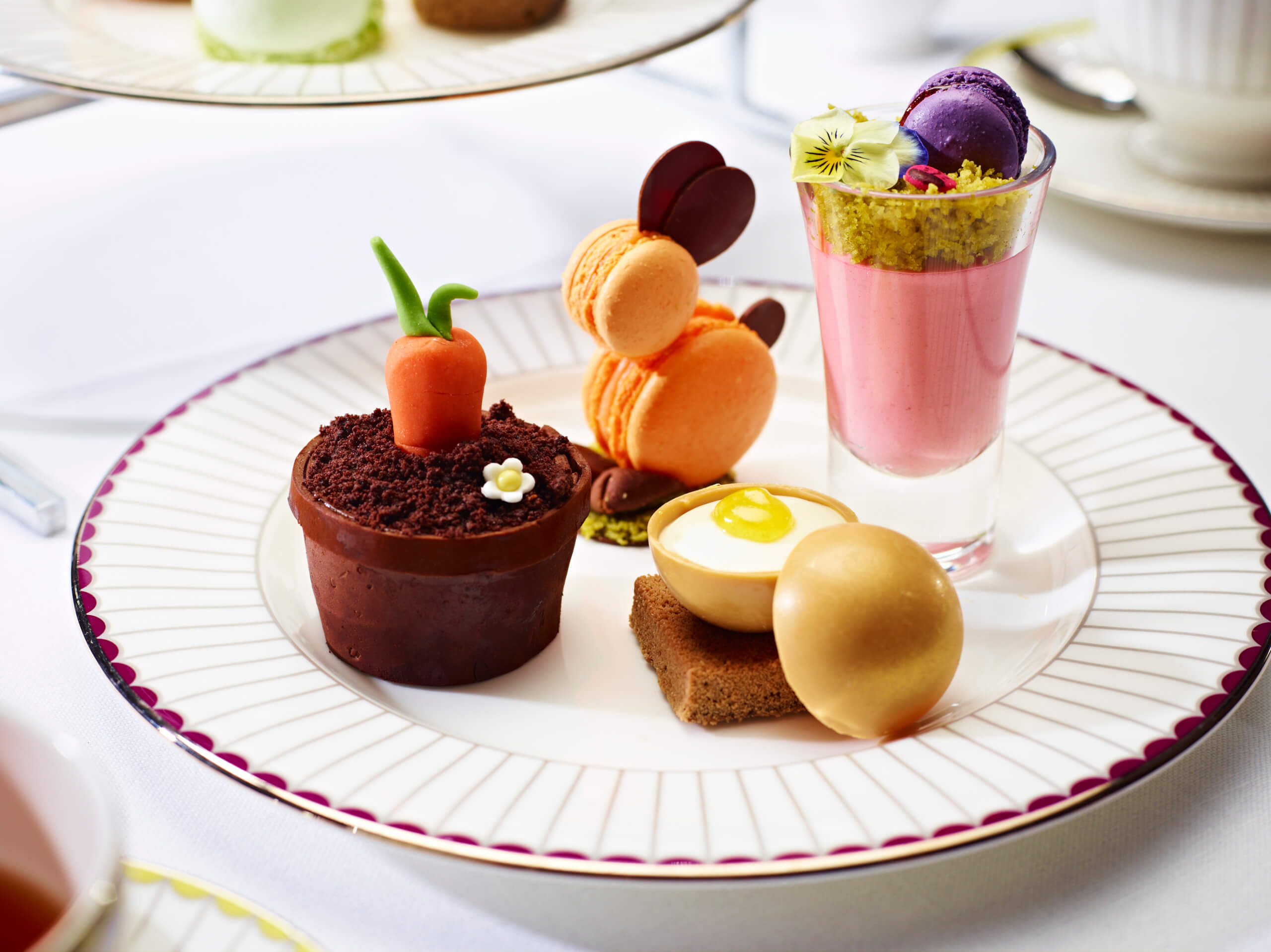 Stunning Westminster hotel Corinthia merges classic elegance with contemporary chic in all aspects of its establishment – so expect nothing less in its seasonal offerings.

Dine underneath a spectacular spherical Baccarat Chandelier in the hotel’s Lobby Lounge, where Easter-themed treats will be served up as part of its afternoon tea.

If the brilliantly designed delicacies weren’t enough, there’s also a golden ticket-style competition for all afternoon tea bookings: over Easter weekend, all guests having tea at Corinthia will be given one of the hotel’s handmade golden eggs, some of which contain surprise gifts ranging from an ESPA Life manicure at its spa to a night’s stay.

Before leaving, marvel at an impressive Easter tree devised by Corinthia’s very own in-house florist. 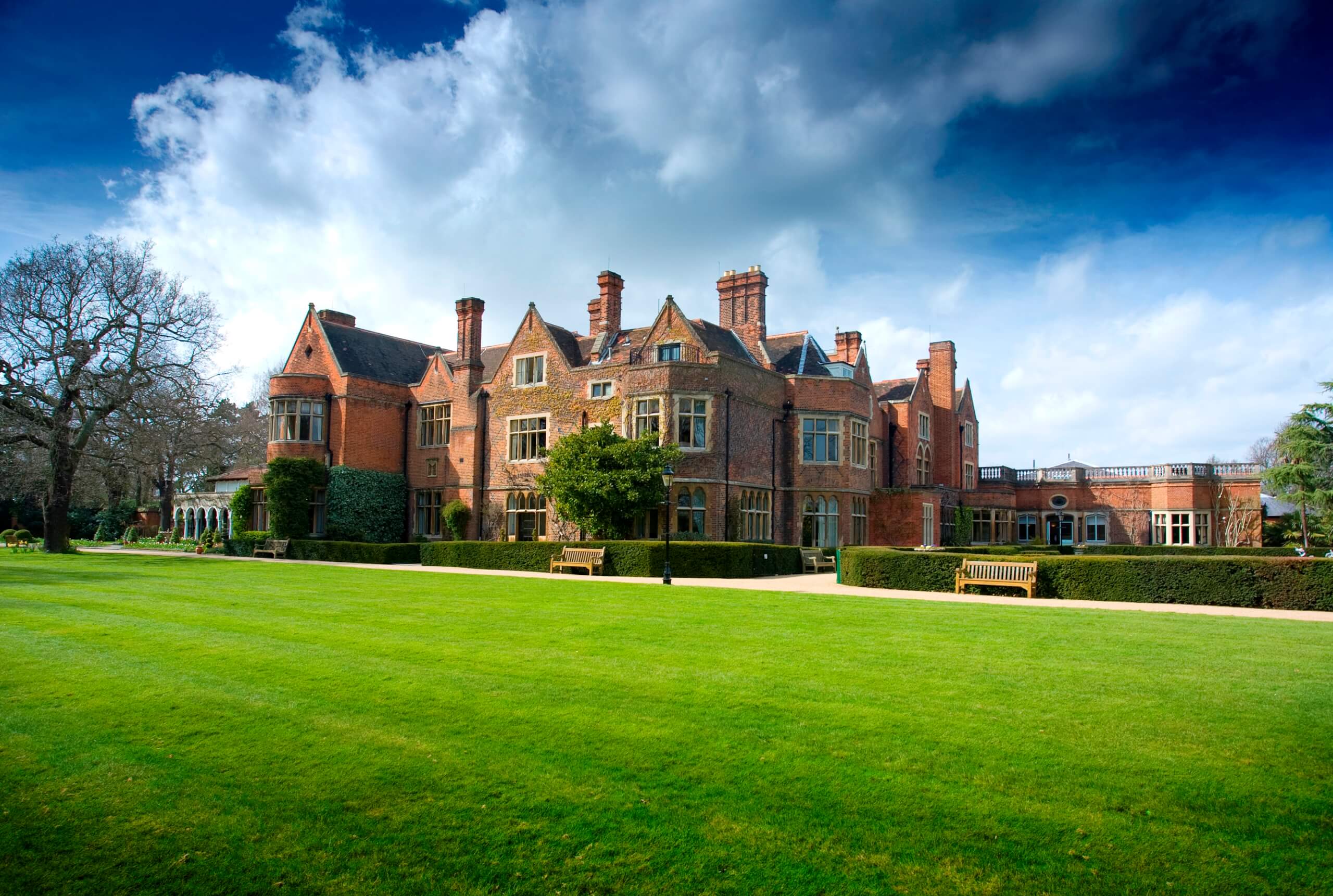 A picturesque site for numerous weddings and private events, the venue – close to Richmond Park – is also perfect if you simply want to sequester yourself away from the rat race but grimace at the thought of travelling outside the M25.

On Easter Sunday and Monday, there will be a themed afternoon tea between 2pm and 6pm, comprising of a meringue chocolate egg, lemon roast chicken as well as egg and cress sandwiches and obligatory scones.

Easter Sunday appears to be the most eventful, with an egg hunt for the little’uns as well as a ‘design your own Easter egg’ competition. 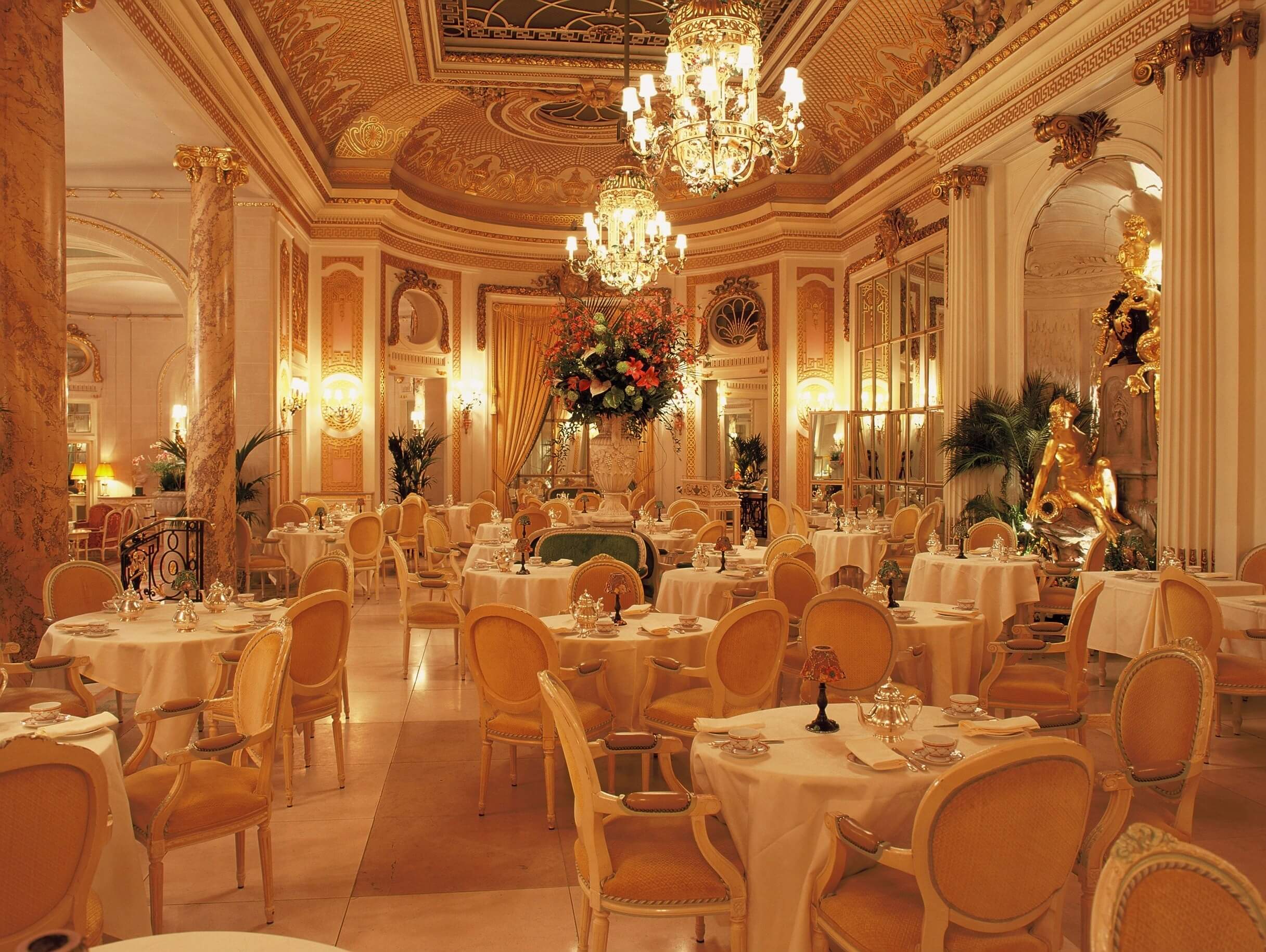 This Piccadilly institution is making sure that children have a particularly special time at Easter.

Served in the hotel’s exquisitely gilded salon The Palm Court, expect the usual sumptuous table display of warm scones, pastries and sandwiches for the afternoon tea, in addition to an Easter egg for younger guests.

On Easter Sunday the little mites will be invited to participate in an egg hunt in the adjoining William Kent House garden, following freshly baked hot cross buns which are being served to guests for breakfast.

Book the Easter afternoon tea for £47 per adult or child – add in some champagne making the tea £59 per adult. 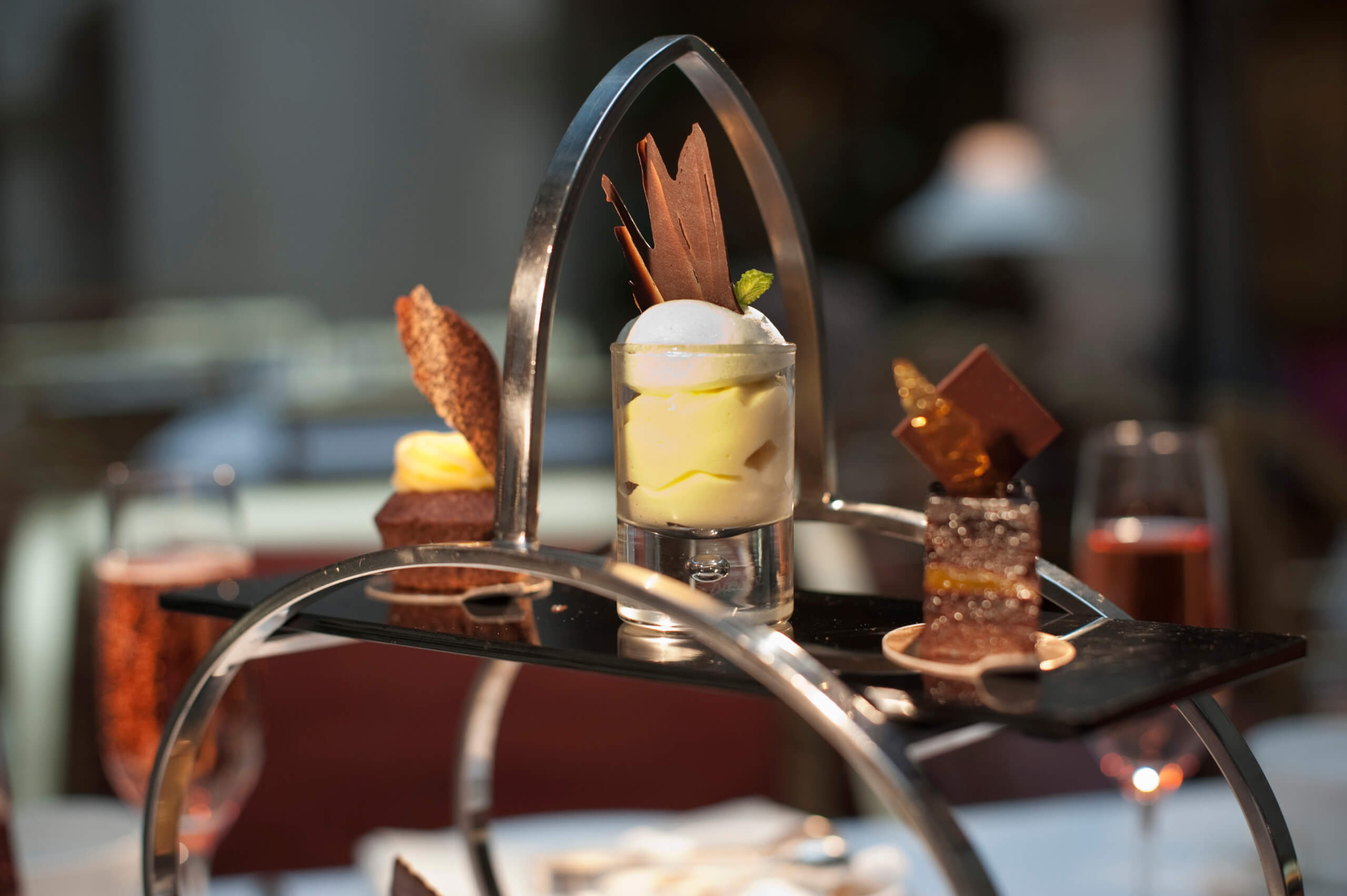 This afternoon tea would be perfect wedged into a sunny day visiting the picturesque narrowboat melee in Little Venice. Just a 20 minute walk away in Marylebone is the large and imposing hotel The Landmark, housed in a beautiful 19th century building.

This Easter the hotel is putting on a wonderful afternoon tea within its Winter Garden – an eight-storey glass-ceiling courtyard freckled with palm trees.

Tuck into a white chocolate birds nest with either griottine cherries or a Guanaja dark chocolate and praline egg hidden within it, a lemon curd ganache and thyme macaroon, in addition to the usual suspects of oak smoked Scottish salmon and chicken sandwiches and hot scones. 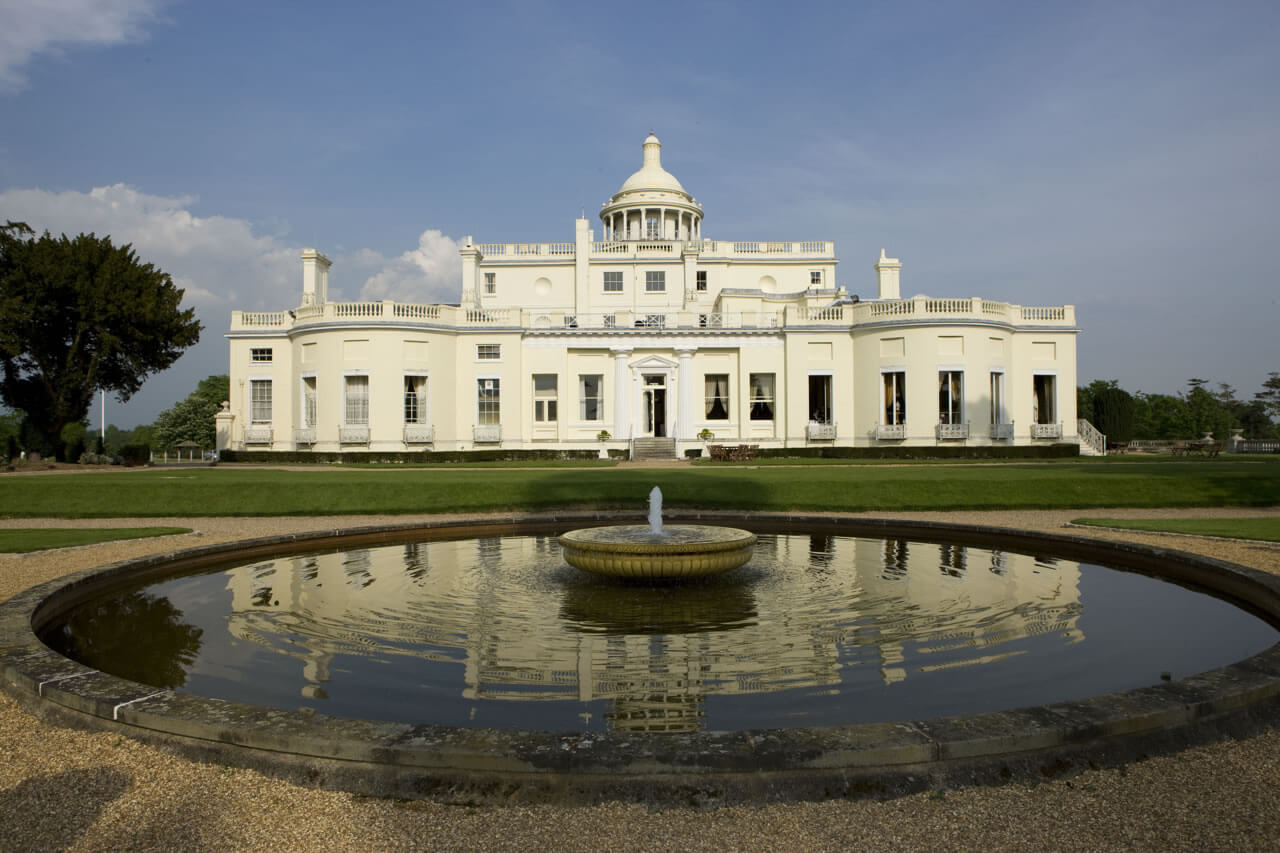 This 300-acre private estate may be 105 years old but it’s certainly likes to host a party – both Katherine Jenkins and Elton John will be performing on its grounds in June (not at the same time, mind – Bucks couldn’t handle the decibel levels).

The hotel has 49-bedrooms, a 27-hole golf course, 13 tennis courts, a hot yoga studio, and even a games room, as well as three separate places to eat and drink.

Stoke Park’s chefs and management have come up with a truly magnificent Easter afternoon tea, providing a spread that includes a Crème Egg tartlet, a bunny millefeuille of dark and white chocolate, glass of Prosecco, and a half of a chocolate egg filled with homemade truffles.

Tea is £40 per person and is situated in The Orangery – try to get a table by a window with views over its lovely garden. 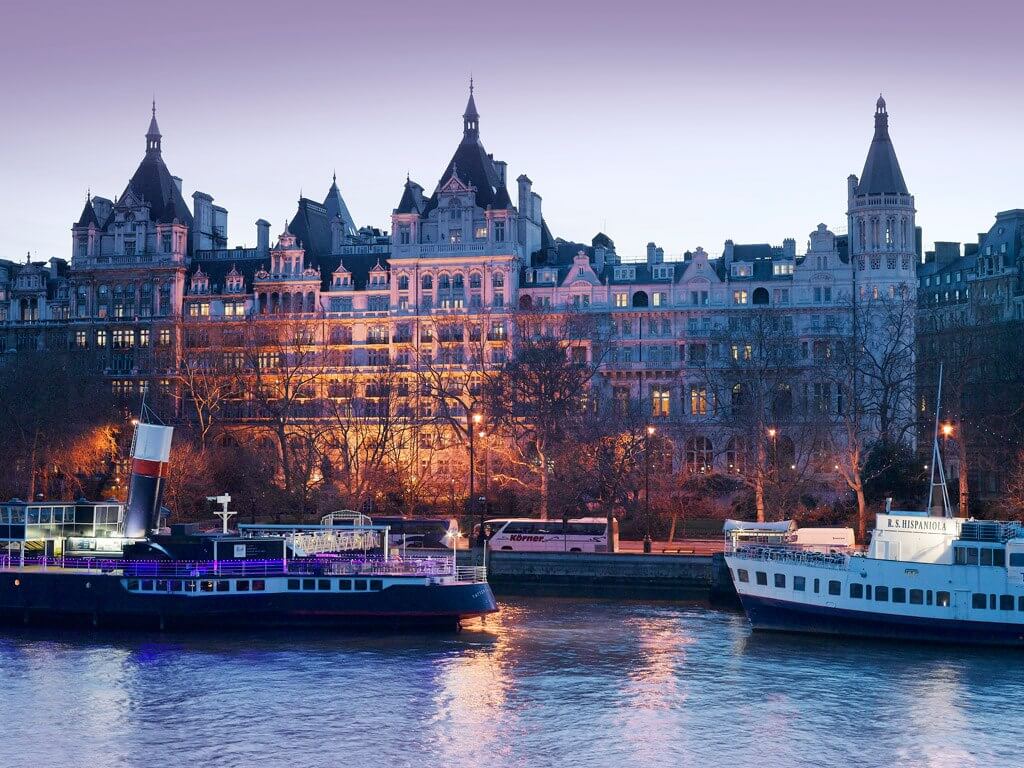 The Royal Horseguards is a beautiful hotel situated right by the River Thames, formerly the Headquarters of the Secret Service during the First World War.

They’ve got a very special Easter takeover taking place; steeped in British heritage, as soon as your enter the lobby of the Victorian hotel, guests will be welcomed with a bespoke Easter sculpture made entirely from sugar and chocolate.  The award-winning afternoon tea in The Lounge has been transformed to include Easter delicacies such as bunny macaroons and egg nest cupcakes.  There is also a chocolate tasting menu in the One Twenty One Two restaurant which combines chocolate into each course. You may want to take a walk by the Thames afterwards… Or not.