Travel / Destinations / England / About Time: You Went on a League Collective Retreat

About Time: You Went on a League Collective RetreatBy George Pearse

I’ve been stressed. No question. Quick to irritation, bad food choices, erratic sleep patterns. All fairly standard fare but in that very London fashion, I found myself stumbling through the weeks. So when a last minute email about the League Collective’s third retreat arrived, I was quick to read the signs. I’d been looking for a way to recalibrate and here it was in my inbox. Late summer sun, fitness, yoga, space away from the hum drum – ‘how have I never retreated before?’, I thought. Lea and Lilly – the Collective’s head honchos – promised me four days of rest and relaxation – via the medium of hill sprints and strong yoga poses – and my, how they delivered.

Driving the hour north from Palma airport it struck me how indulgent the very notion of a retreat is. A break in almost its purest form, no agenda other than your best-self emerging on the other side. This is something I was eager to ensure. As I stumbled out of the taxi outside the palatial villa, I was greeted by 12 beaming faces, my fellow retreaters; an army of wellness warriors. Part of me was apprehensive about group dynamics; previous group trips I’ve taken have left me needing another holiday. But this wasn’t about the Collective. It was, as hard as it can be to say, about me. And so after 5 minutes of pleasantries, I made my excuses and headed to bed for an early night. Putting my indulgent self first right from the get go. 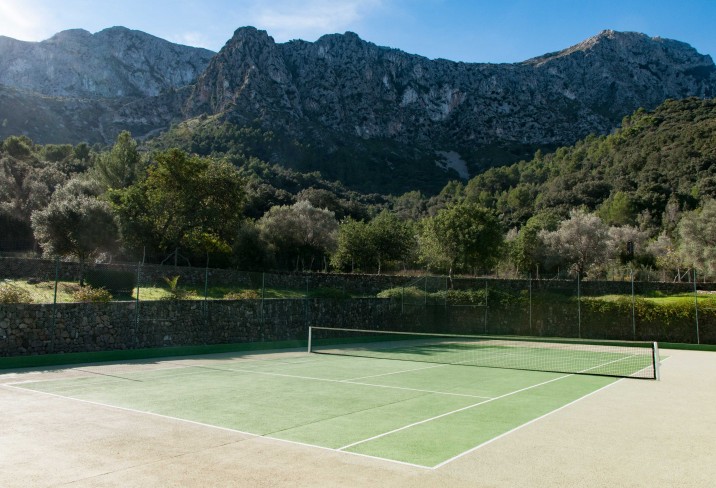 Three things ensured the seamless running of this break. Firstly, the itinerary; you can’t be your best if this is lousy, I’m afraid. Nor can you self-actualize in peace if your hosts aren’t up to scratch. Fortunately with League Collective, both of these factors were handsomely catered for. In addition, the villa in which the retreating cohort resided, was something else – all grand atrium, a huge communal kitchen, and an outdoor terrace with sea view. Yes please. Wildly generous meals were delivered outdoors by a swimming pool of blue that would make Hockney purr. All of this louchely surrounded by a Balearic mountain range. As settings for pre-winter health breaks go, it really would take some topping. 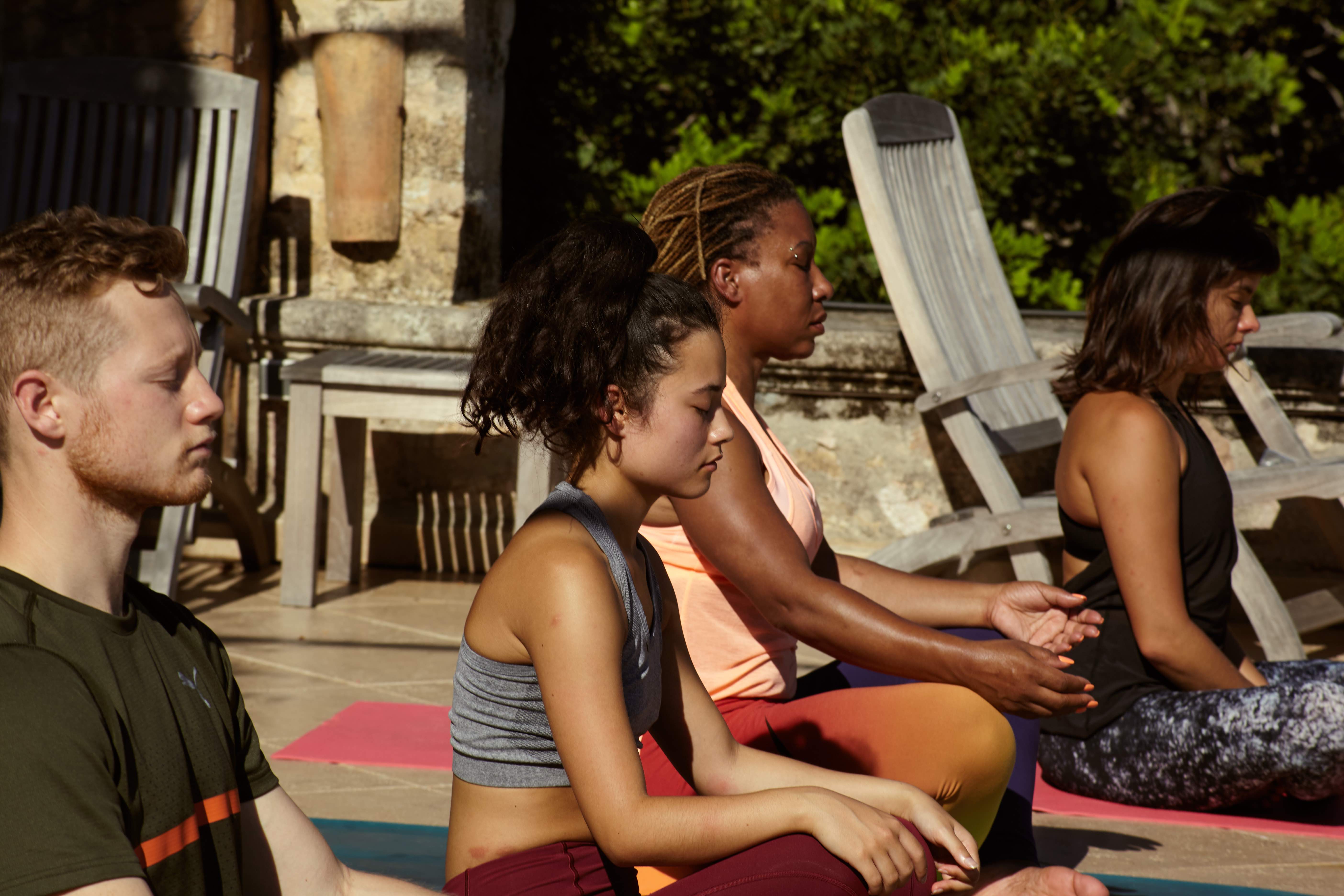 7.30am is time for guided meditation in the grounds of the villa. Birds chimed as the sun steadily rose upon our faces, the day broke as I gathered my thoughts and channelled my breath. The stresses and strains of daily life in the capital began to recede. I began accomplishing my mission. Fresh coffee was served for those interested, before we promptly set off on a mountain run. 4km, meandering up around the surrounding mountains. Now here is a slight issue: the likelihood that 12 people want to run uphill for breakfast is slim. And so it proved as 5 or 6 of us set out for the summit. If you’re booking a retreat, you’ll need to ensure it caters to your fitness preferences. I myself was in 7th heaven, returning from the hour of lung busting, straight into a powerful forest yoga class. Hip openings, wild things and the clock hadn’t even struck 10am!

Breakfast followed the day’s first yoga instalment, and a hearty, vegetarian  bounty lay in wait. I’m biased but I really do find peace at a buffet. Another word of advice – ensure that those running your retreat are mindful of the food that you’ll consume. If you’re burning north of 1000 calories a day, you’ll want to be well catered for. We had two chefs prepare breakfast and dinner and what this did for morale cannot be overstated. The food was truly to be savoured. 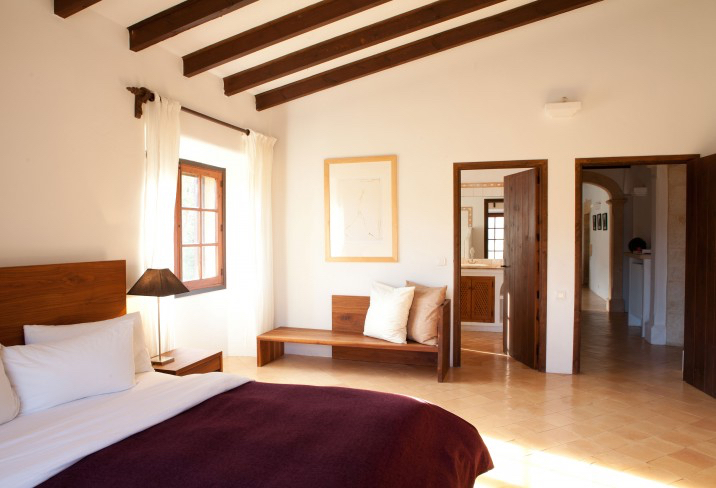 It was cherished even more in light of the trip’s bustling itinerary. An hour or two of downtime in the afternoon was punctuated with core heavy HIIT sessions and excursions on a trek amongst the mountains, or the beach about half an hour away. A great feature of the group dynamics was that there were no pressures to perform, or join in any particular part. I was free to get on with some reading one afternoon, the pre-dinner yin yoga session was not for everyone and that was just fine. London quickly felt a very long way away.

Meal time quickly became a forum where people felt really free to open up. Sharing stories of their motives for retreating, exploring the role of fitness in their lives. Whilst people poured over some of their most sensitive subjects, it never felt overwrought or heavy. This, I think, is the little bit of magic that is the League Collective. The duo’s youthful energy combined with the beautiful surroundings helps to give your problems a fresh perspective. Their retreats offer you distance and time – two of modern life’s biggest luxuries. The four early nights energised me on Monday in a way that clients and colleagues alike couldn’t help but note. My stresses aren’t gone, old habits will be back sooner or later, but how reassuring that I know there’s a place out there where I can get back to me.

For more information on the League Collective, see here. 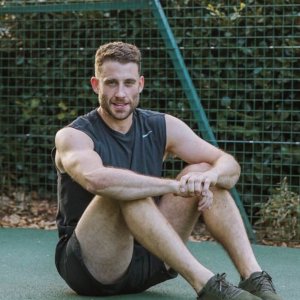 George Pearse is Fitness Editor at About Time, and a personal trainer in east London with over 4 years experience in training groups and private clients. His primary training interests are conditioning and mobility and he’s often to be found practising yoga around London. He’s also hugely passionate about exercise’s capacity for good with regard to mental wellbeing, as evidence by his recent qualification as a psychodynamic counsellor.