We’ve never met someone who doesn’t like Dishoom. And if we did, it’s highly doubtful we’d be friends. We love Dishoom; the iconic bacon and egg naan, the laid-back vibe (read: low lighting, distressed features, and wooden seating), the fact the restaurant can be packed and it still runs like a well-oiled machine, and their unlimited chai tea. Dishoom’s arrival on the London food scene back in 2010 was met with open arms – they shook up the brunch game in a big way. Who needs avocado on toast when you can feast on spicy eggs, breakfast naans and chicken livers – we lapped it up, and so did the rest of the capital.

They’ve been quietly spawning like rabbits over the past couple of years. And for good reason. There’s now four sites across London, and they recently travelled beyond the Watford Gap to open their fifth site in Edinburgh earlier this year. It’s a bold move for the city – Dishoom saw a gap in the foodie scene and ran with it. And boy, should Edinburgh be glad of its new Bombay inspired joint.

If you’re heading up to Scotland in the next couple of months, swing by Dishoom for an Indian feast of delights. Here’s the 411: 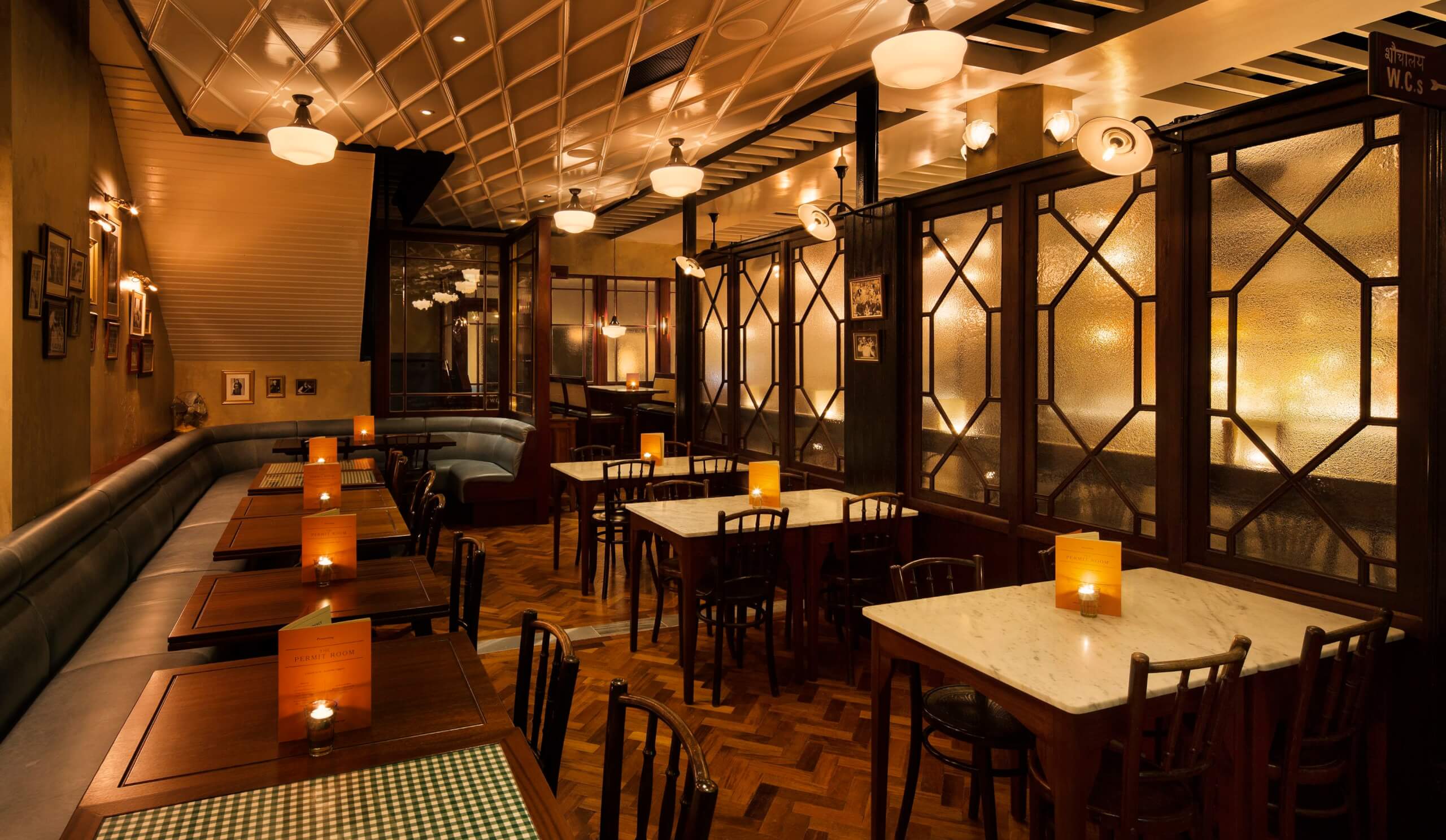 If you’re not familiar with Dishoom, here’s what you need to know: Dishoom pays loving homage to the Irani cafés that were once part of the fabric of life in Bombay. Opened early last century by Zoroastrian immigrants from Iran, there were almost 400 of these cafés at their peak in the 1960s. Now fewer than 30 remain.

Rich businessmen, courting couples and sweaty taxi-wallas all frequented the cafés. They were the first place in the city where people from any caste or class could have an inexpensive snack or a hearty meal, or just seek cool refuge from the street with a glass of chai. But now, as the city rushes towards modernity, these beautiful old cafés are fading into memory. This is the story of Dishoom. 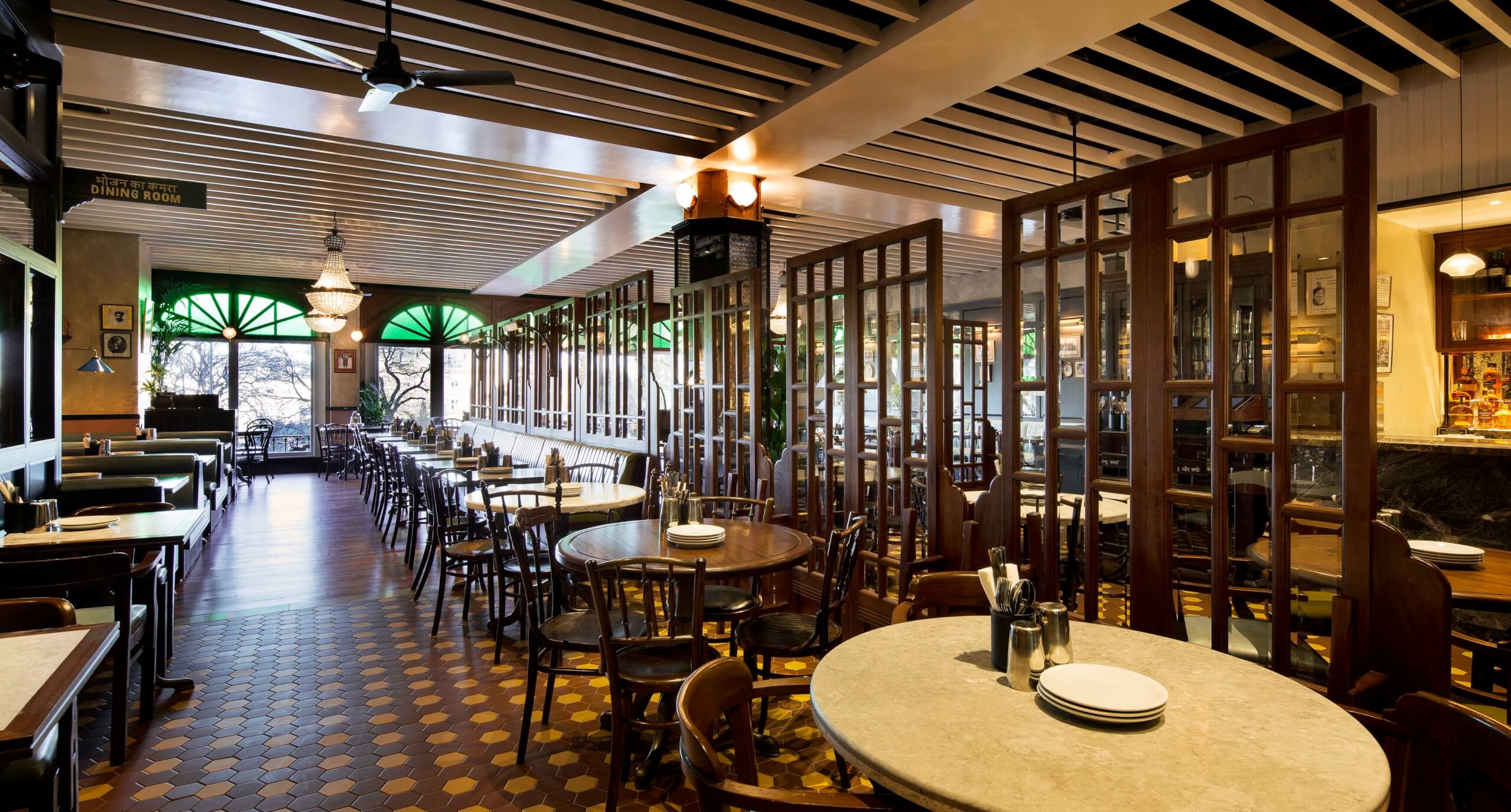 Each Dishoom has its own unique story to tell. Dishoom Edinburgh pays tribute to the distinguished Scotsman Sir Patrick Geddes (1854-1932); botanist, ecologist, sociologist, town planner and social reformer, he was a long-time resident of both Edinburgh and Bombay, and had a significant influence on both cities.

Following Geddes’s footsteps, Dishoom Head Babus Kavi Thakrar and Shamil Thakrar and designers, Macaulay Sinclair, travelled to Bombay and spent time in academic institutions and libraries such as the J. N. Petit Reading Room and the David Sassoon Library. They also sourced over 60 original pieces of furniture, fixtures and fittings for Dishoom Edinburgh in Bombay. 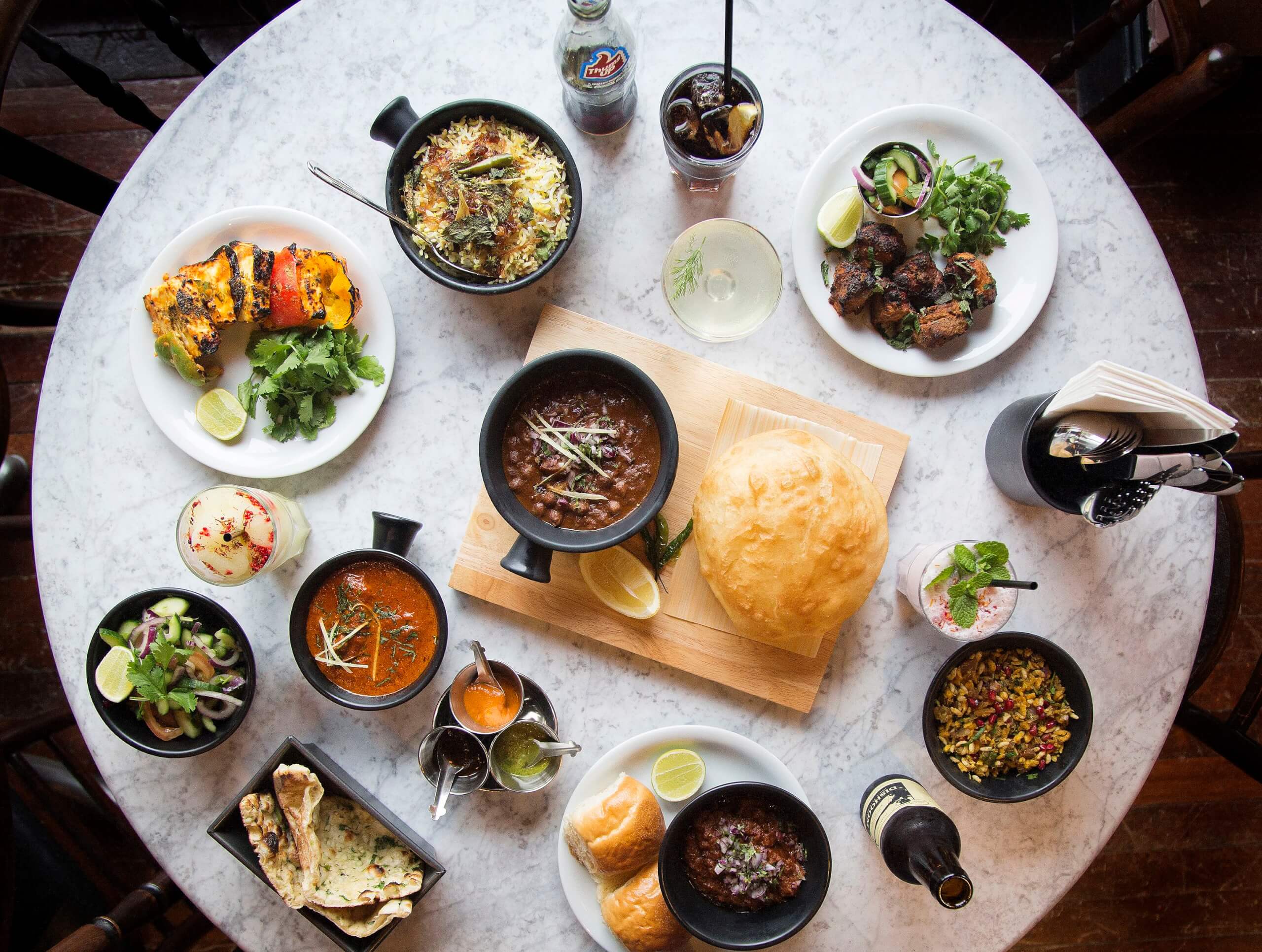 The food at Dishoom is a far cry from the oily, rich kormas you devour down at your local curry houses. Don’t get us wrong, there’s a time and a place for those type of curries (a la Friday night at 10pm when you’ve sank a few pints/wines). The food at Dishoom is honest, wholesome grub that’s great for sharing and passing around the table.

Let’s talk pau. Keema pau. Essentially it’s a bowl of spiced minced lamb, but the flavours are incredible. Rich, flavoursome lamb with peas and Indian spices. The combination of the aromatic lamb and soft buttery rolls is downright delicious, and properly comforting. Ditch the irons, and dive straight it with the buttered paus – super light, doughy little numbers that are the perfect foundation to making a sloppy joe sandwich, Dishoom style. 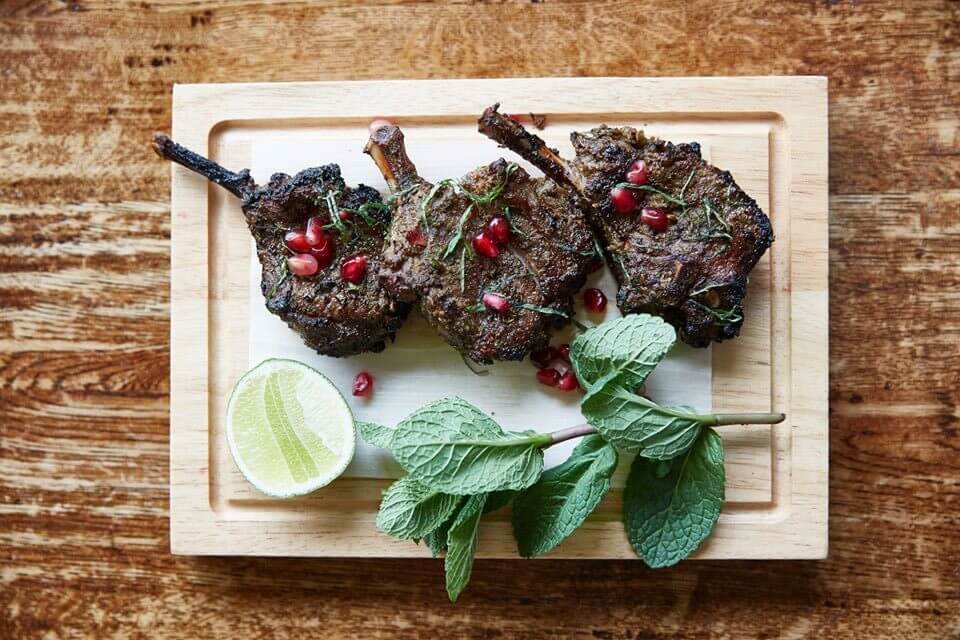 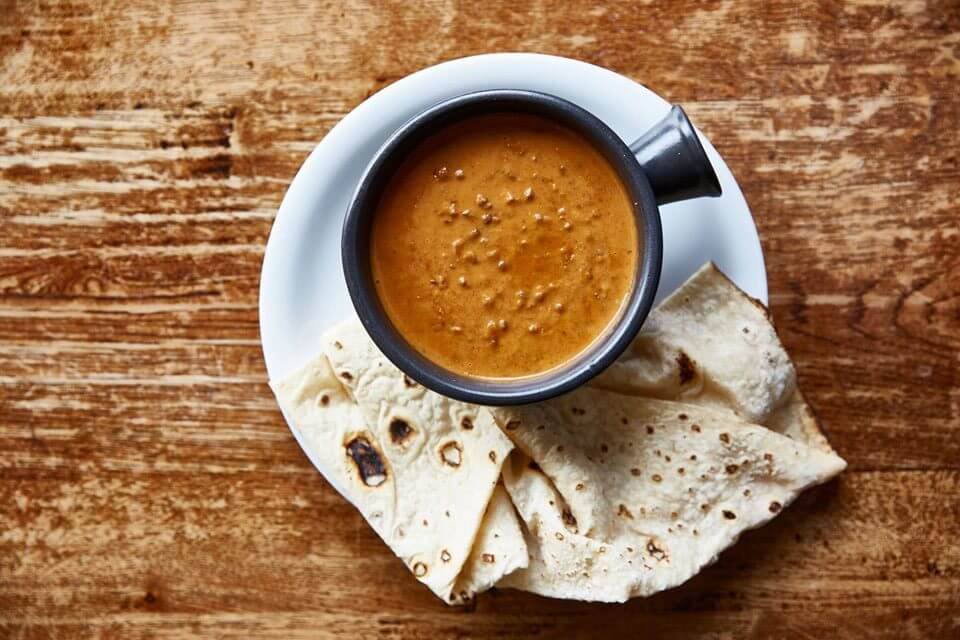 Next up: paneer. The cheesy beauty at Dishoom Edinburgh is stonkingly good. We’re talking about hearty slabs of marinated paneer, gently charred and served with red and green peppers. Usually paneer is found suffocating under a sea of potatoes, spinach and other ingredients, but here the paneer is given the limelight it so rightly deserves.

The black house daal is another must-try dish. Slowed cooked for 24 hours, this is one of Dishoom’s signature eats. Deeply intense, the daal is packed full of tender black lentils. It’s aromatic, earthy and well worthy of an order.

Overcooked calamari is one of our pet hates – rubbery, chewy and not all that pleasant, a bad calamari just doesn’t sit well with us. But the Indian calamari is such a treat. Think of your run of the mill calamari, but elevated to new tasty heights thanks to the crumb coating. It’s an utterly divine dish, with crispy, gloriously delicious calamari finished with a Dishoom drizzle. 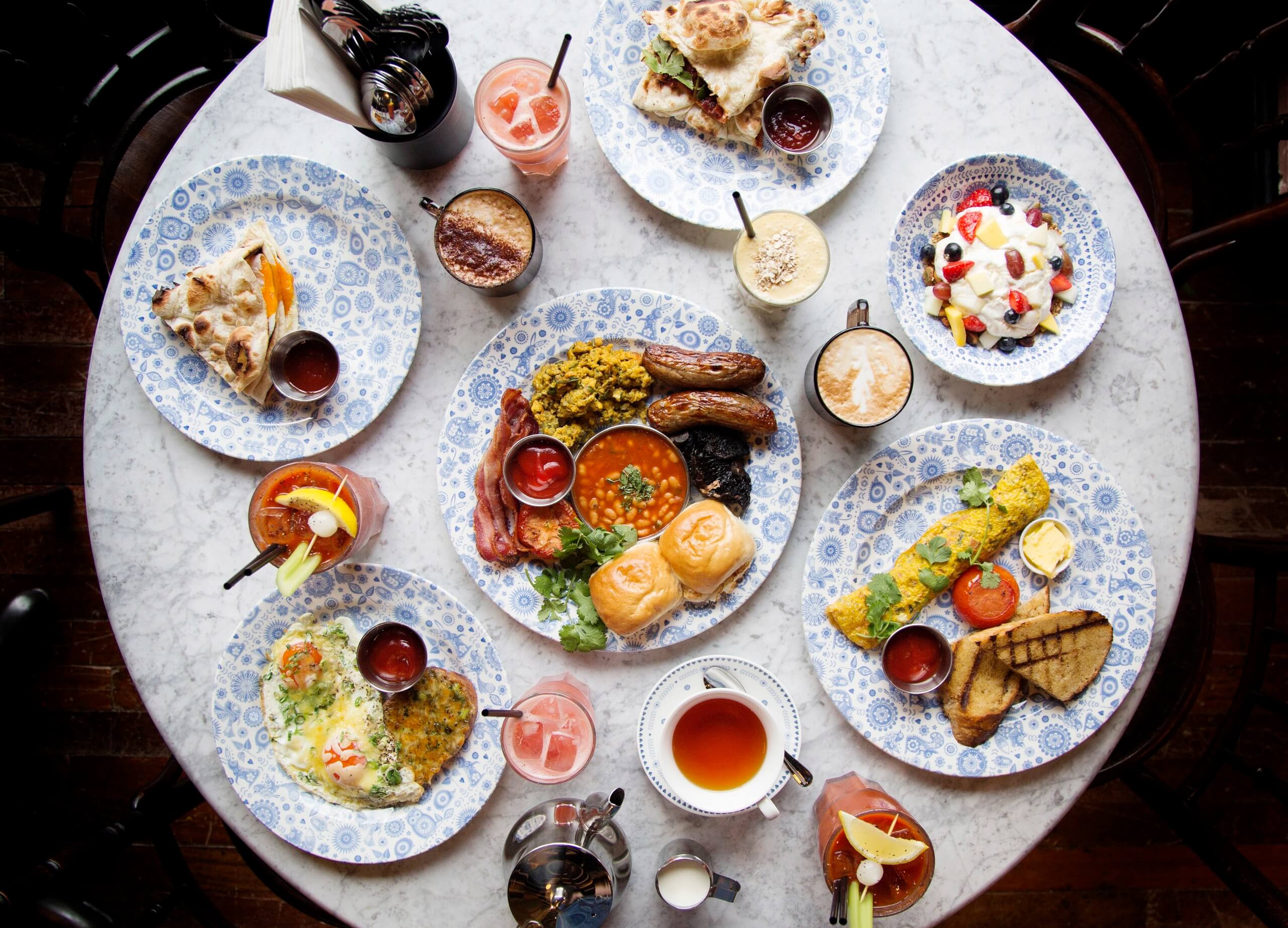 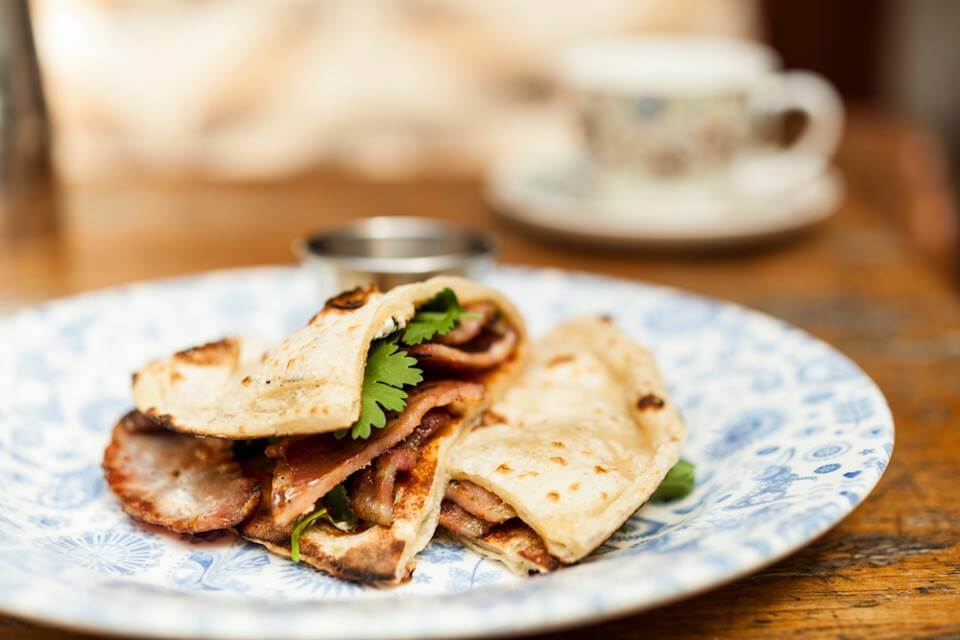 Man, we love Dishoom’s breakfast offering. There’s plenty of dishes for veggies, and if you ask them, they have a dedicated menu for coeliacs and dairy-free babes. Their bacon naan is somewhat of a Dishoom symbol, and we like ours with a fried egg. Slap on the chilli jam, ditch the cutlery and just use your hands. It’s an eggy, meaty tasty mess – the runny yolk, the crispy bacon and the punchy chilli jam is a winning combo. 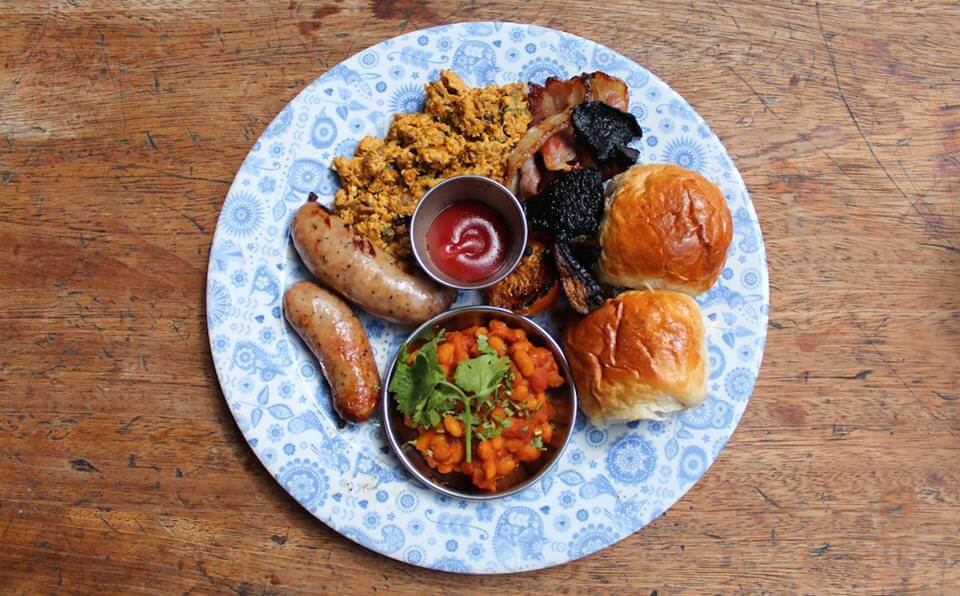 But, friends, may be draw your attention to the big Bombay. Think of it as a classic fry up with big Indian flavours – there’s streaky bacon from The Ginger Pig, peppery Shropshire pork sausages, masala baked beans, grilled field mushroom, grilled tomato and buttered pau buns. It’s the stuff breakfast dreams are made of. And before you judge/troll us on Twitter – the granola is surprisingly good. Nutty, spiced granola atop thick vanilla yogurt and served with an ample portion of fruit. Just remember to take advantage of the unlimited chai (we had four and couldn’t feel our face). 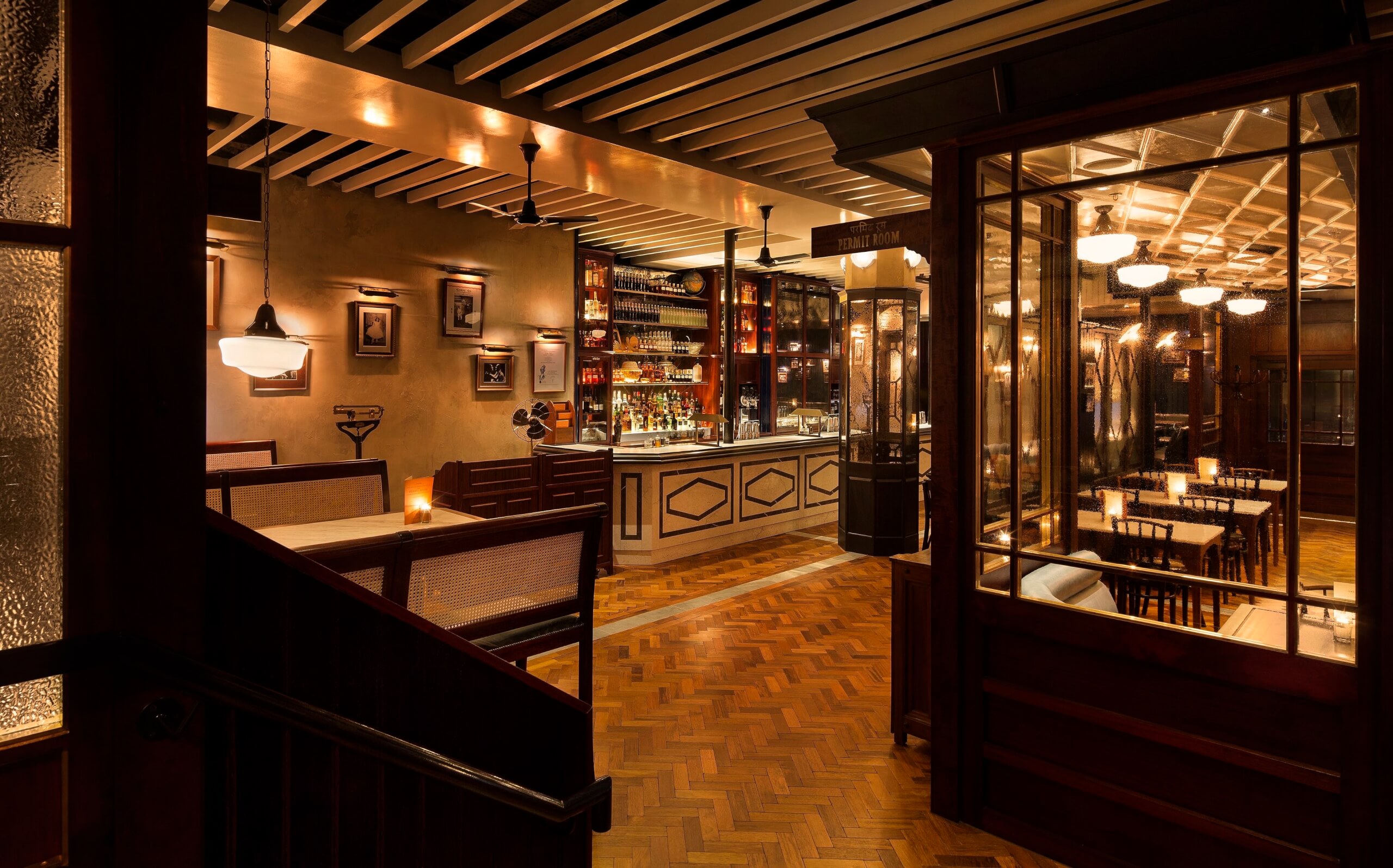 Head downstairs within Dishoom Edinburgh to find the Permit Room – Dishoom’s idea of an eccentric early 20th century drinking den in Bombay, named after the bars where permit-holders may consume alcohol (if only ‘for preservation and maintenance of one’s health’).

The Permit Room at Dishoom Edinburgh pays homage to Bombay’s rich tradition of Parsi theatre. Patrick Geddes was a regular theatre-goer and, during the time he lived in Bombay, Parsi theatre was enjoying its heyday as perhaps the principal form of public entertainment. 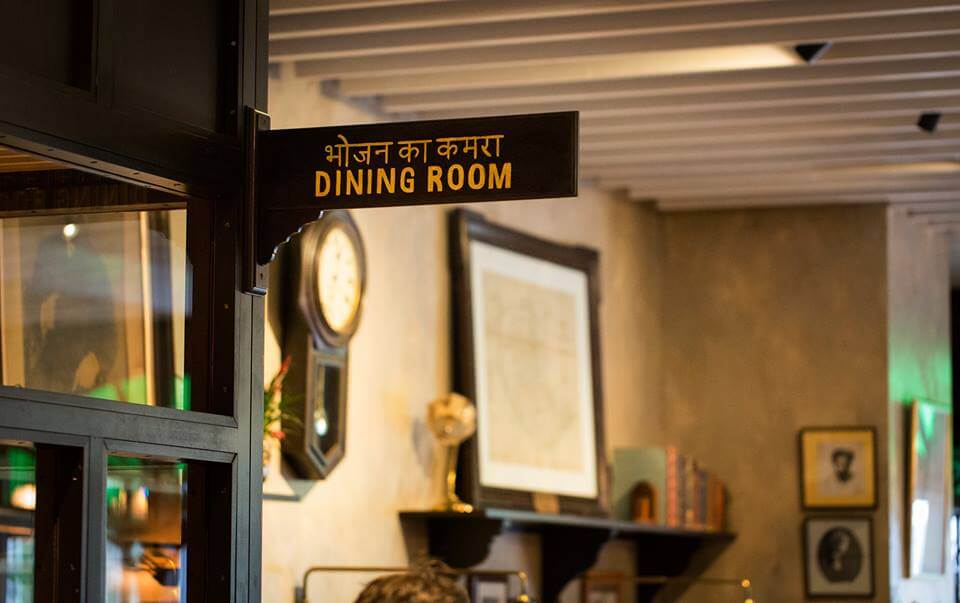 We love Dishoom Edinburgh. The food is ruddy good, and so is the drink selection. But Dishoom is far more than than just a restaurant. It’s a community. A welcoming community that will no doubt become a a staple in Edinburgh’s dining scene. Their tagline is ‘from Bombay with Love’, and we can confirm this restaurant packs a hella’ lot of love into their grub and service. Go and see for yourself.