Travel / Destinations / Long-Haul / About Time: You Explored Kanazawa and Matsumoto in Japan

About Time: You Explored Kanazawa and Matsumoto in JapanBy Angelica Malin

About 2.5 hours away from Tokyo on the Hokuriku Shinkansen are the charming cities of Kanazawa and Matsumoto. Rich in history and culture, the two cities are at the forefront of celebrating ancient Japanese artisan arts and crafts into a modern era.

Both cities are part of the famed “Mitsuboshi Kaidou: (Three-star Road) part of the Nostalgic Route of Shoryudo, one of the greatest sightseeing routes in Japan.

KANAZAWA AND THE MAEDA CLAN 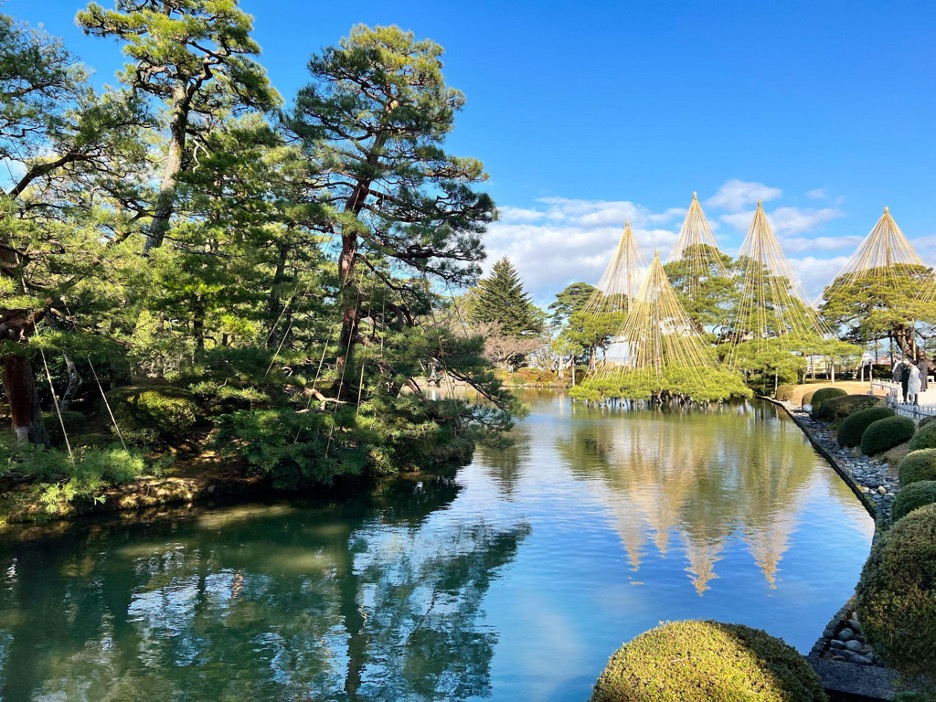 Once part of the ancient Kaga Province, Kanazawa became the epicentre of artisans and merchants during the Sengoku and Edo periods through the foresight of the eminent Maeda clan. Channelling their immense wealth into the pursuit of arts and crafts (such as Kaga Yuzen kimono and gold leaf) rather than military endeavours, the Maeda clan allayed the fears of the ruling Shogunate of a rebellion.

The importance of nature, art and crafts can be seen throughout the city especially in the renown Kenrokuen Gardens, one of the three great Japanese landscaped gardens. Every generation of the Maeda clan has expanded the Kenrokuen grounds to what it is today. 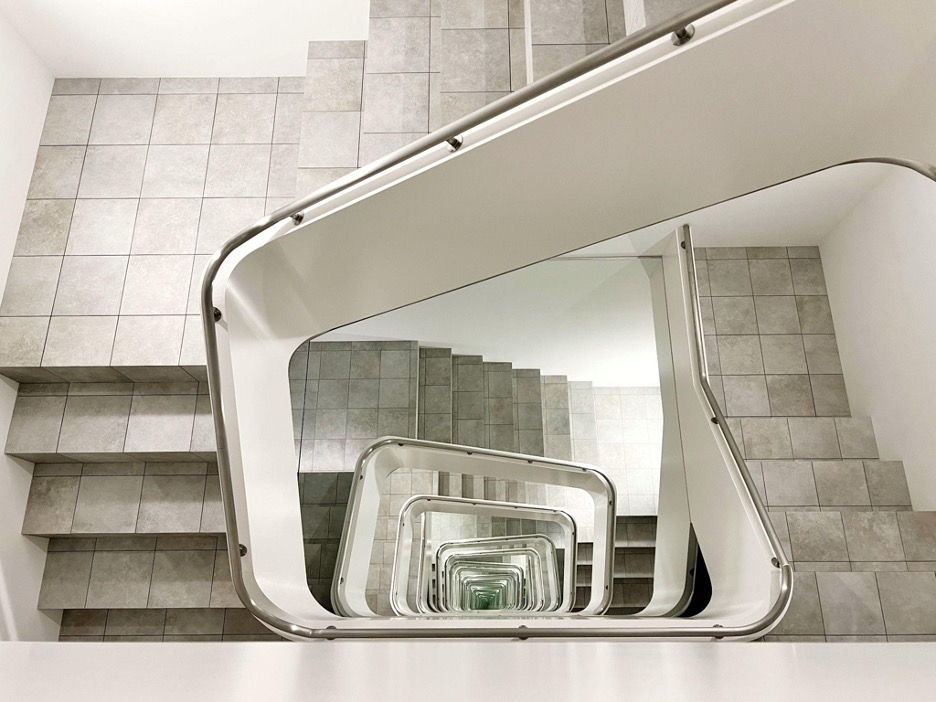 Looking to the future and embracing the ever-evolving modern art scene, the city is also home to the 21st Century Museum which showcases acclaimed contemporary artists from Japan and all over the world. One of its most popular permanent exhibits is Leandro Erlich’s Swimming Pool.

The new private contemporary art museum KAMU offers an active alternative experience of sculpture, installation, technology and 3D art. KAMU exhibitions are held in several small buildings across the city, with five currently active and more planned to open in the future. One of them even turns into a speakeasy bar at night. 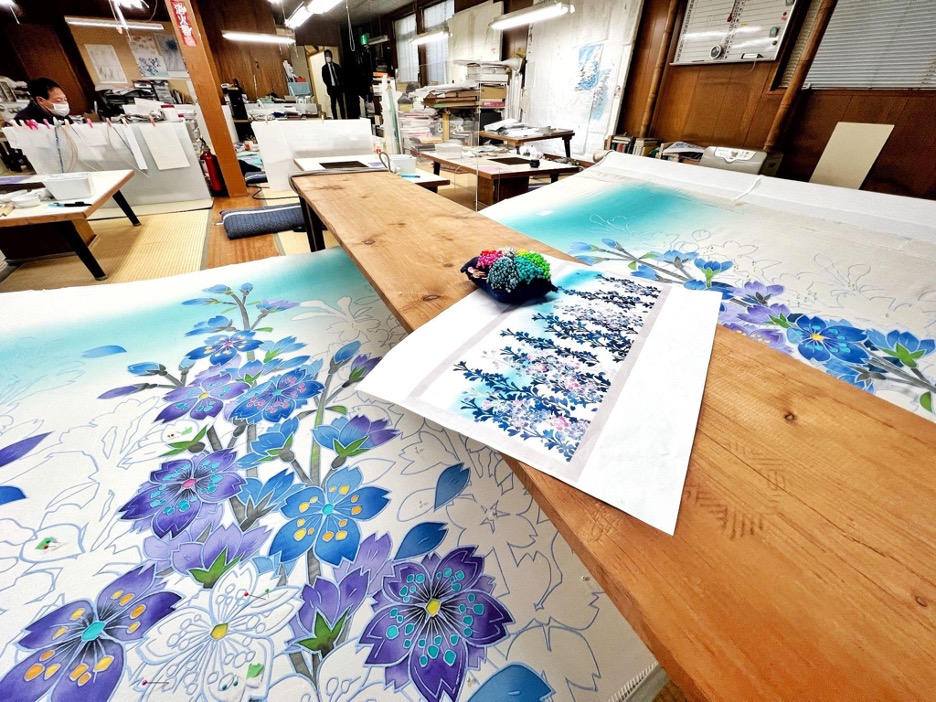 Ancient artisan skills and crafts from Kanazawa are still highly sought after, none more so than kimonos crafted in the Kaga Yuzen technique by a single artisan. Characterized by the “Kaga Gosai”, the five base colours and the realistic floral patterns, including “insect biting”; Kaga Yuzen refrains from using additional decorations like gold leaf, and embroidering that is signature of Kyo-Yuzen kimonos (Yuzen made in Kyoto).

Where once there were 150 Kaga Yuzen workshops, now only 10 remain with 130 practicing artisans. One of these workshops belongs to the Maida family, who at the helm is the current sandaime (third generation family head) Maida Hitoshi. A recipient of numerous awards including the prestigious Japan Kogei Association 2018 award, Maida-san has been instrumental in preserving the traditional Kaga Yuzen techniques whilst showcasing them on a modern stage with works in hotels and retail outlets.

One can even visit the MAIDA studio and make your own personal Furoshiki (traditional Japanese wrapping cloth) using Kaga Yuzen techniques.

FEEL AT HOME WITH A MACHIYA STAY 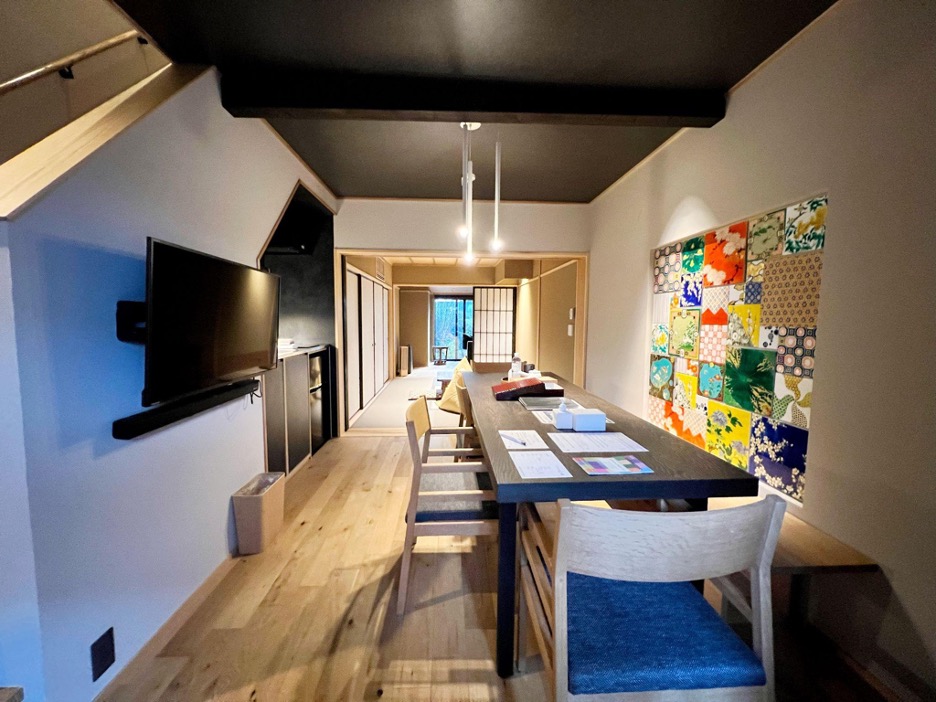 Recently in Japan, there has been a movement to reclaim and give new life to machiya (old merchant houses) in Kanazawa and Kyoto as luxury accommodation options. Beautifully renovated to modern needs yet maintaining the traditional design, these properties are stunning standalone entities. They are perfect to have as a home base right in the heart of Kanazawa’s Nagamachi (samurai) district, and a short walk from the Higashi Chaya (Geisha teahouses) district. Each property is individually decorated with aspects of Kanazawa’s traditional crafts such as Kutani Porcelain. 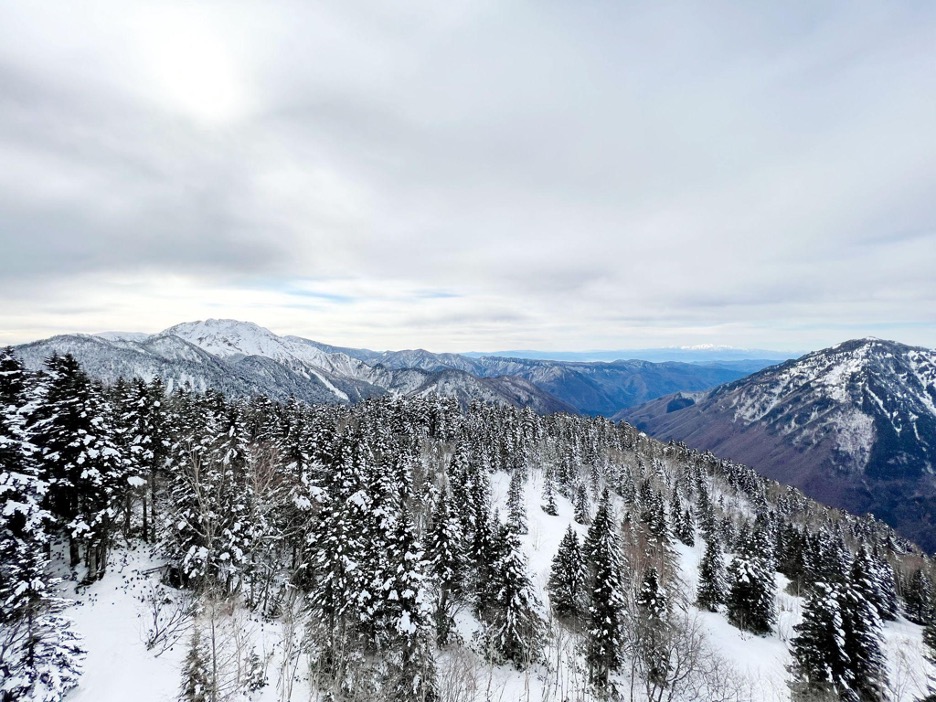 On the way back down to Tokyo, make sure to include Matsumoto on the itinerary. Known as the gateway to the Northern Japan Alps, it is one of the best bases for exploring the surrounding mountain regions whether it be hiking in summer, spring, autumn or snowshoeing in winter. For those who love art, the city is known as the hometown of internationally acclaimed artist Yayoi Kusama and where many of her pieces are showcased.

Plan your trip from Kanazawa to Matsumoto to include the mountains of Takayama via the Shinhotaka Ropeway where you can view the Hida Mountain Range and indulge in an open-air onsen. 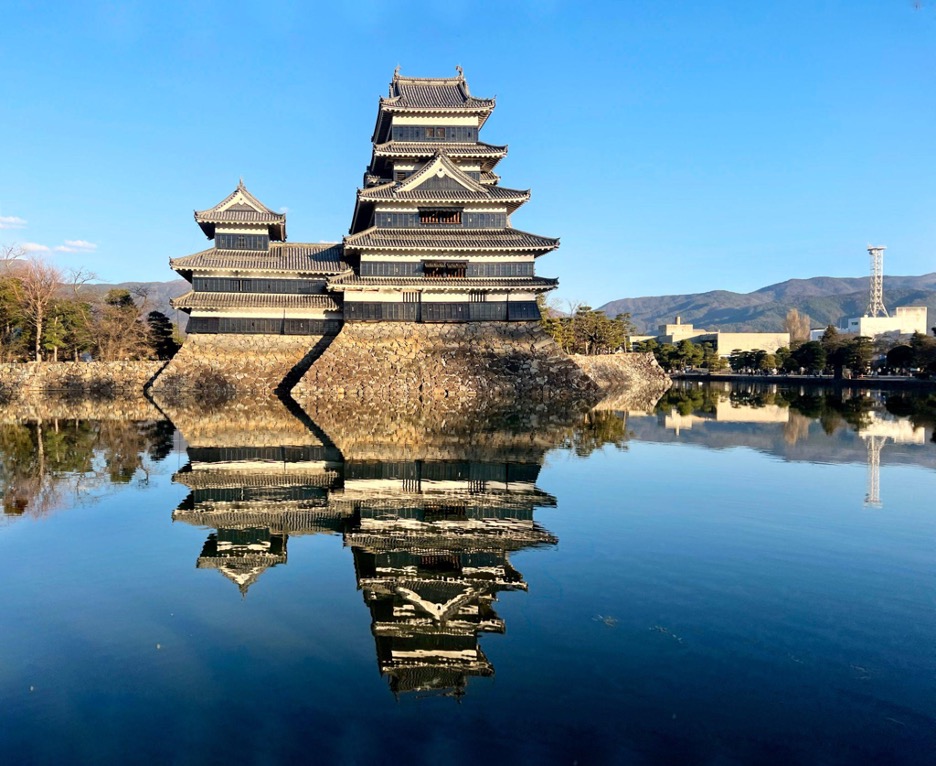 One of the five castles designated as a “National Treasure of Japan,” Matsumoto Castle is the oldest five-tiered, six story castle tower remaining. Built in the 16th century, the castle is locally known as the “crow castle” due to its black rooftops that remind one of the spread of the bird’s wings.

The outer moat reflects the castle beautifully on clear days, where you will find people slowly meandering along the path and in springtime, appreciating the hundreds of cherry blossom trees which line the path. Traditional rickshaw experiences are also available from Matsumoto Castle and around the town, where the driver often regales you with local stories, legends and knowledge of Matsumoto town. 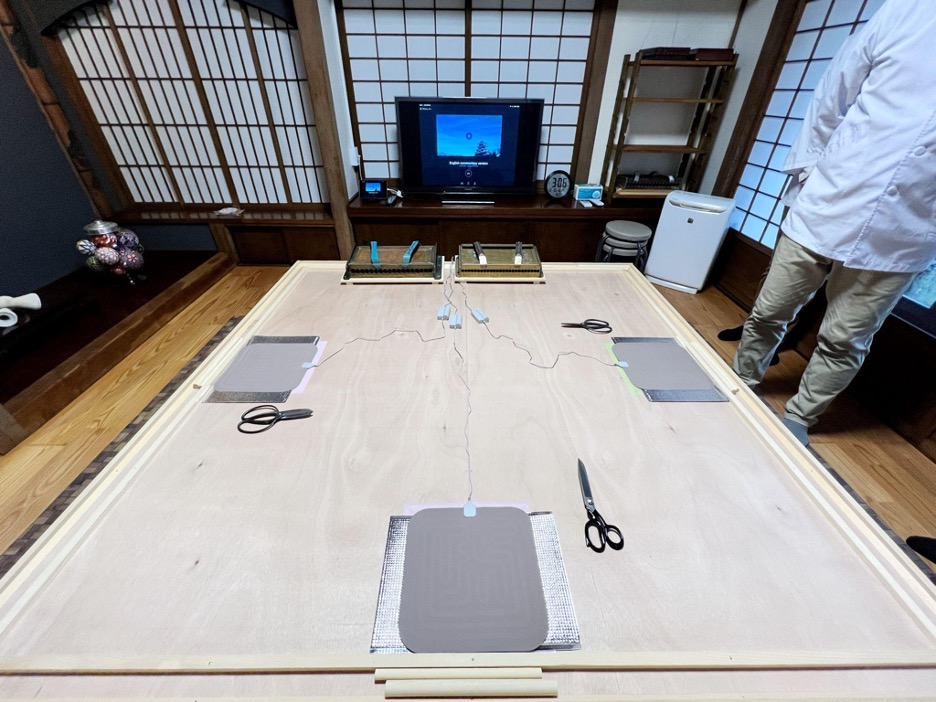 For those with a love of sweets, Matsumoto is famed for its traditional candy made from rice syrup starch resembling “Matsumoto Temari” from Yamaya Candy shop. Currently run by the 13th head of the family (jusandaime) Ota Yoshihi, Yamaya has been making candy since 1672.

Their love of rice candy came about when during Oshogatsu (Japanese New Year), sake was often drunk in celebration. However only the adults could partake, so the family wanted to create something with the same essential ingredients of sake (rice and water) that all ages could enjoy.

Yamaya has “Matsumoto Temari” candy making workshops available for all ages to enjoy. 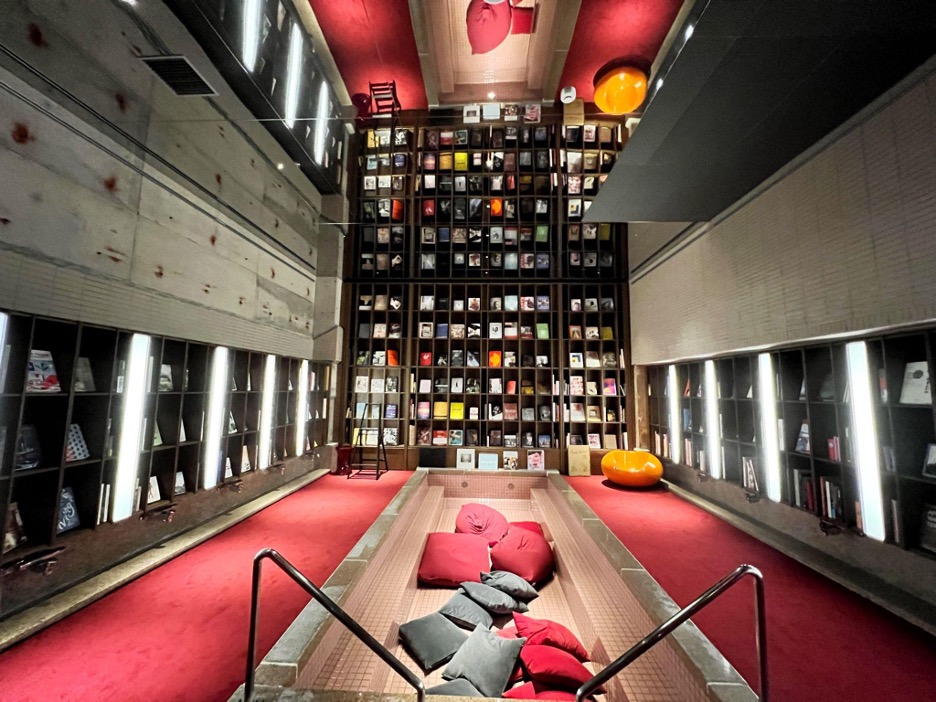 Travel to Asama Onsen town for a relaxing stay at the luxurious and modern Matsumoto Jujo, where all rooms have their own private onsen open-air bath. Formerly a classic Ryokan, Matsumoto Jujo Honbako (the book hotel) opened in July 2020. The hotel embraces its beautiful history by utilising what was once the public onsen baths and turning them into the bookshop and reading area. Guests can enjoy a wide array of books and private reading nooks during their stay.

For those who love a more traditional ryokan feel, Matsumoto Jujo also paid homage to its 300year old past by opening Matsumoto Jujo Koyanagi (the original ryokan’s name) next door in September 2020. Resplendent with soft, warm tones of tatami and wood, Koyanagi was designed in direct contrast to the modernity of Honbako with equal luxuriousness.

For more information on travel to the Three Star Road – www.mitsuboshi-kaidou.com