Winter sun, that doesn’t involve an expensive long flight to the Caribbean. That period before Europe just is that bit too cold. Where do you go?

We have the answer for you, Egypt.The home of the greatest cultural artefacts, history, the Pyramids but also the charming seaside resort you might never have heard of nestled on the eastern coast along the Red Sea, El Gouna. 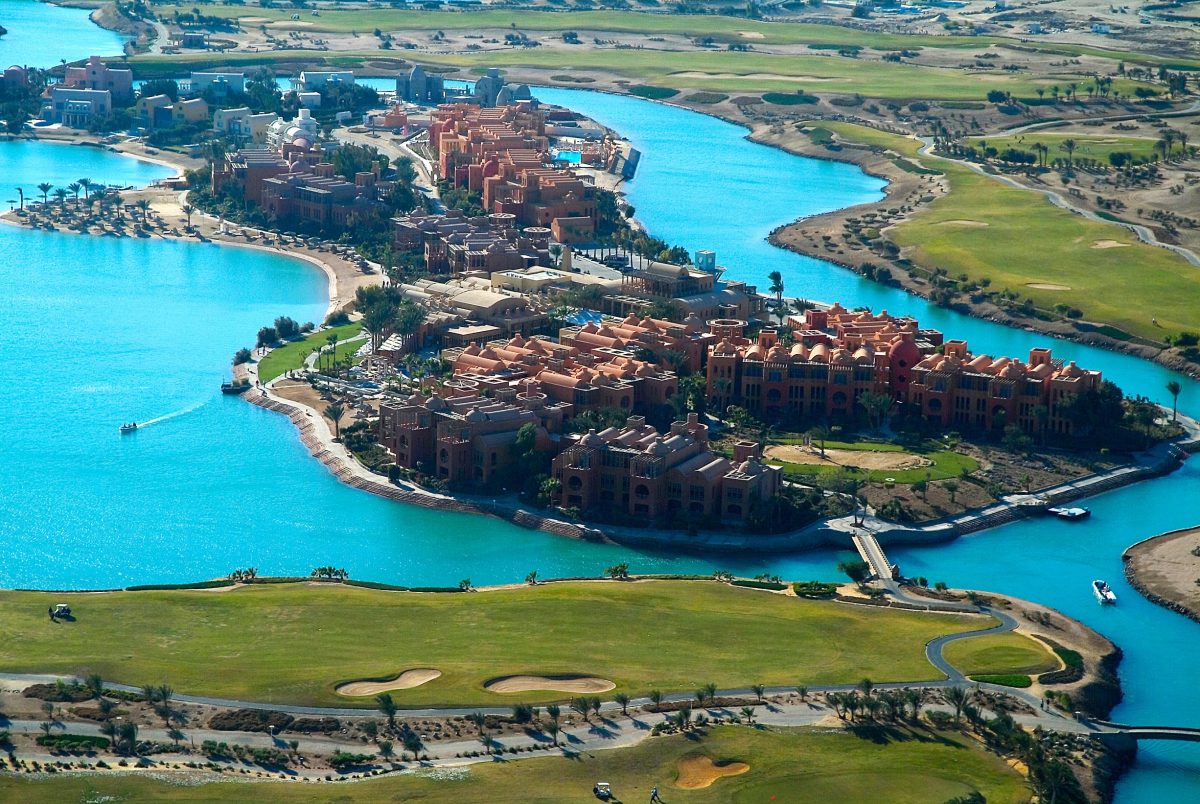 Located a 45 minute drive from Hurghada and far more understated and glamorous than its counterpart, Sharm el Sheikh, El Gouna is made up of 10km beach, lagoons, hotels, 36 interlocking islands, a sunny haven for a traveller which you never need to leave. What About Time Magazine editor in chief Angelica Malin herself introduced me to, the fly and flop. A place where you can happily rest your head knowing that you are within a small radius of delicious food, beaches, pools, top spas and snorkel spots. Total self sufficiency. It is ‘the’ spot for Egyptians seeking refuge from a hot Cairo, and is known as the Hamptons of the Egypt.

If you are so inclined to leave this relaxing bubble, the town’s location also offers good access to many of Egypt’s natural wonders, historical sites, and archaeological treasures. The ancient temples of Luxor and Aswan are only a short drive away 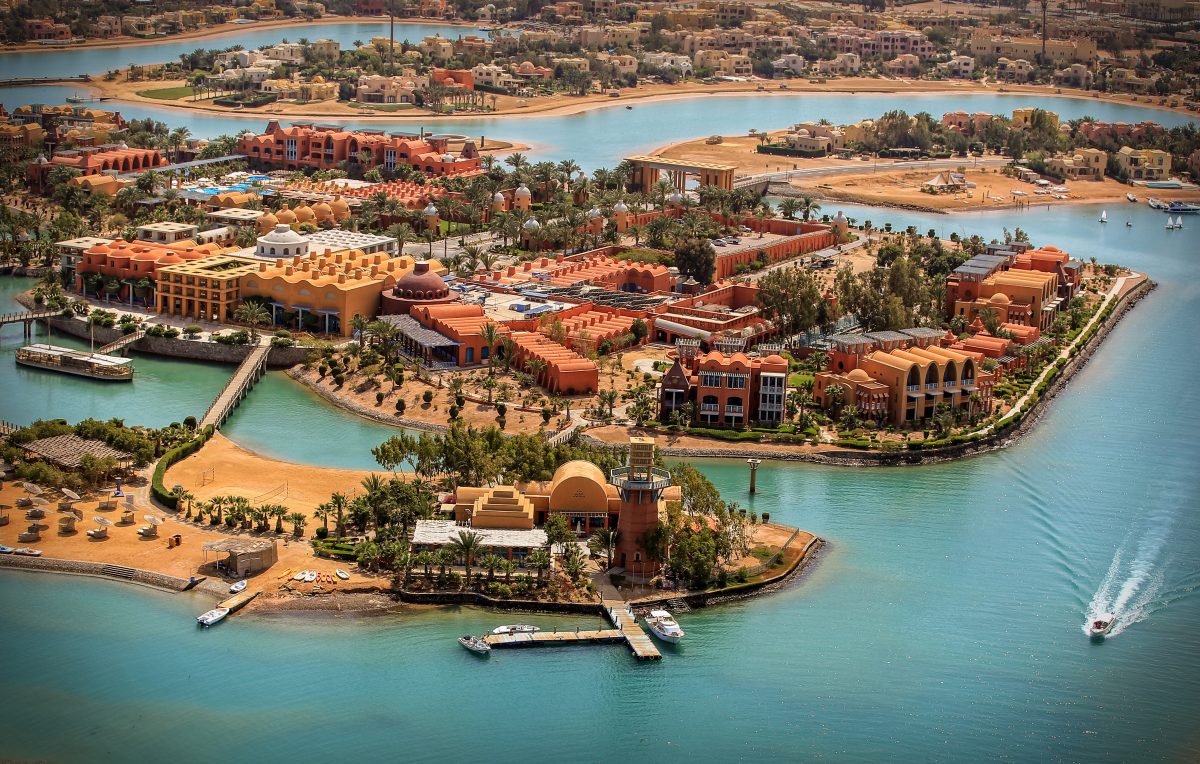 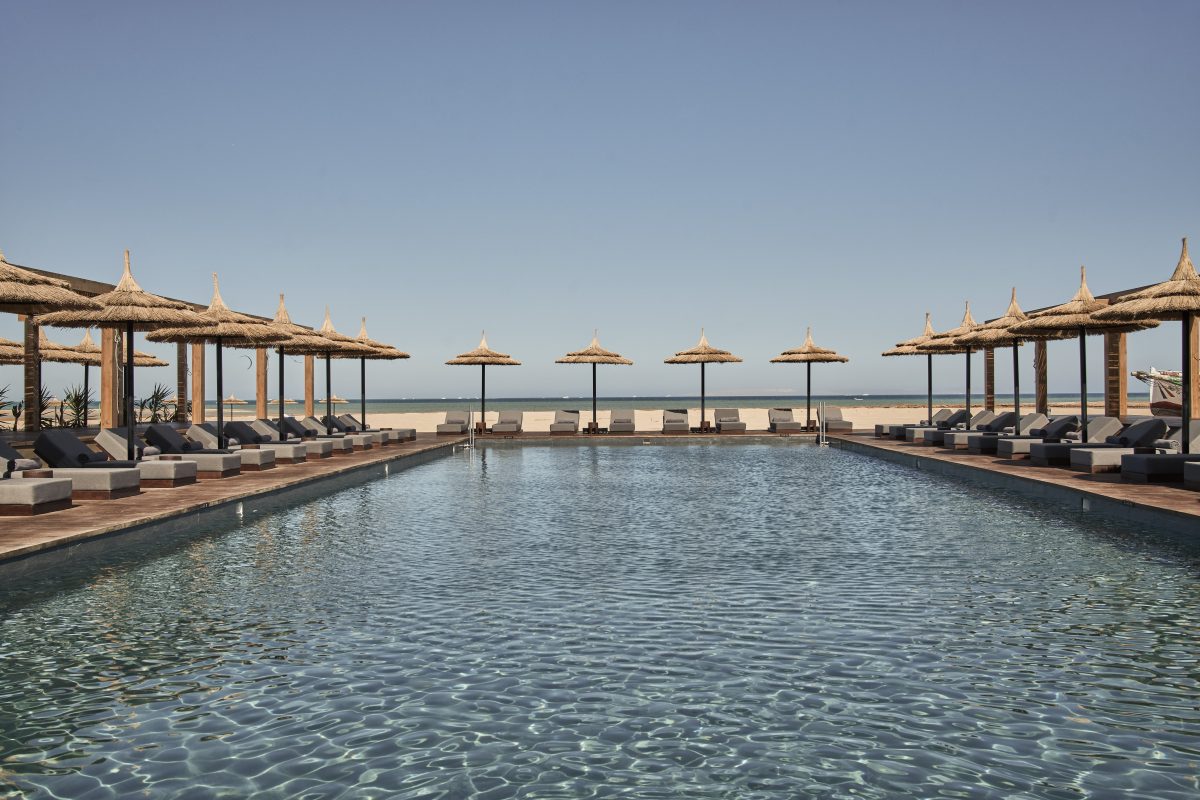 But first a bit of history on El Gouna and its conception. It’s a little bit different than your usual holiday destination.

In 1989, the Egyptian entrepreneur and engineer Samih Sawiris decided to build some nice beach houses with a private marina for himself and some close friends. His dream really came true and so much more.  Since shops, petrol stations and a hospital were to be found 25 kilometres away in Hurghada, the idea of adding a small town of his own was born.  Now it’s home to 12000 people, hotels and resorts from chains around the world, hospitals, winery, golf courses and a marina with the fanciest yachts.

What does this mean, it means everything is so convenient and curated, when you create a town like this, nothing is more than 10 minutes away and you get around using tuktuk that are no more than £2 for short rides. A pop to the marina for a coffee, a pop downtown for a drink and a pop for dinner at one of the 100 restaurants. Everything is supremely curated, and overseen by Orascom Development, so the quality is high, everything is incredibly clean and it feels really safe.

El Gouna, Egypt: Where to Stay

There are 18 hotels to choose from, and a real variety from low key boutique hotels to luxurious hip spots.

We think Casa Cook Is the perfect spot for the AT guest. It is five star quality but with that off beat hipster energy from the endless vibey spots to watch the sunsets from this beach hideaway and its rustic furniture. The hotel feels secluded and romantic but is only five minutes from the marina where El Gouna locals go to hang out. 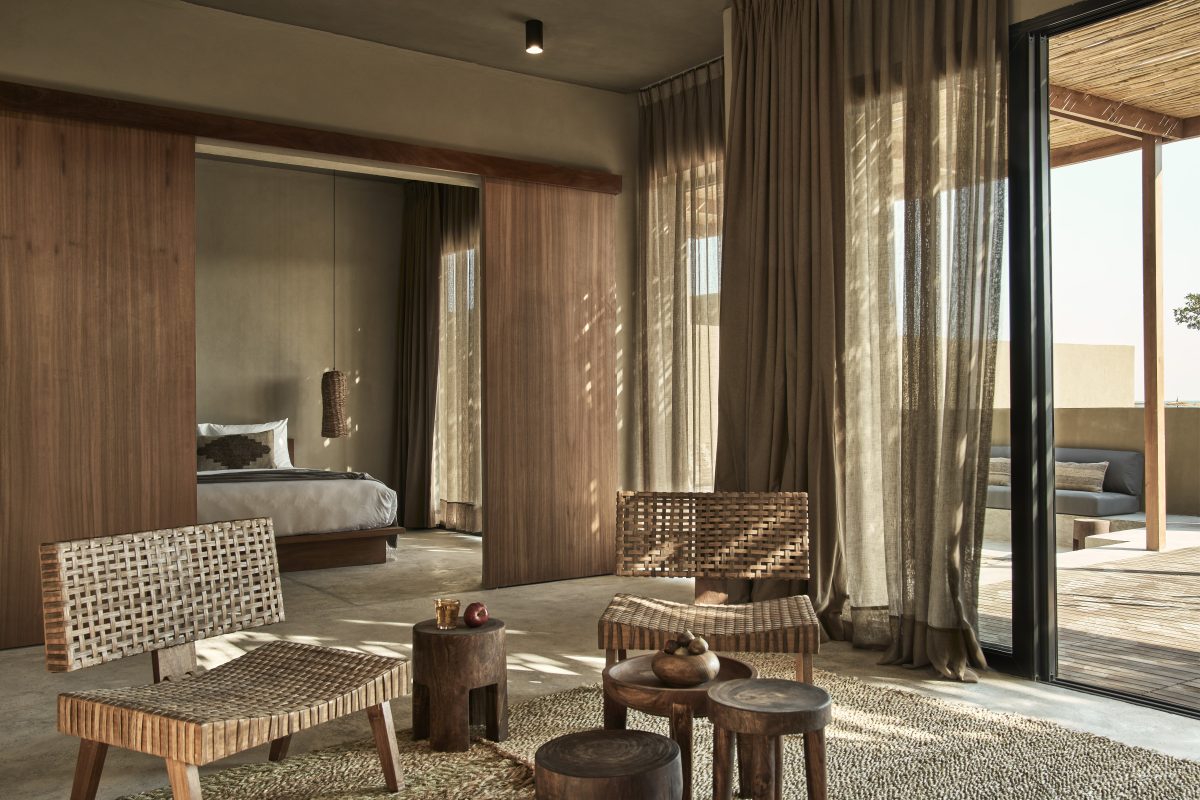 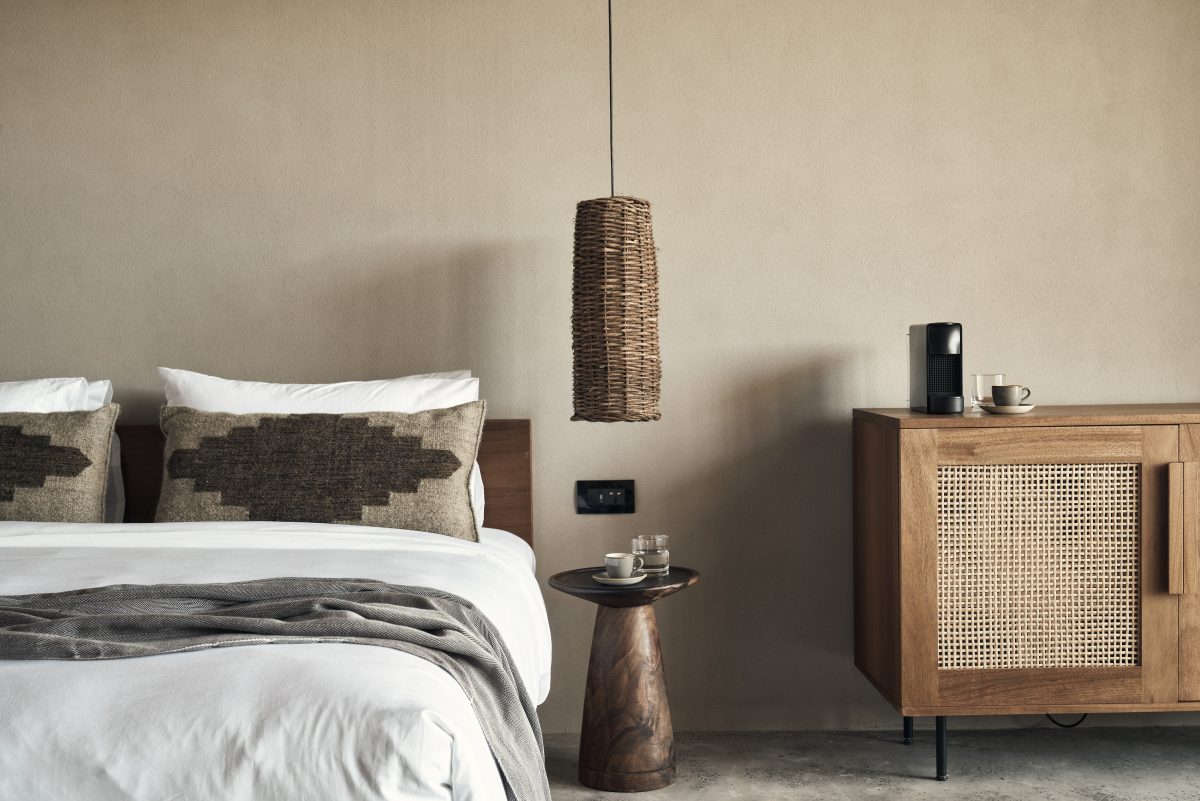 The hotel is Arabic in its architecture and intricate design with incredibly chic interiors, rustic wooden features and and cool grey stone floors throughout which you will be grateful for when the temperature starts rising. It is the desert after all.

A significant proportion of the rooms have their own little pools which are perfect for watching the sun go down on the comfiest sunbeds we had ever tried and all rooms have a private terrace. A combination of a bed and a trampoline provided the perfect resting spot for us to watch the palm trees framing the deep turquoise sea and the kite surfers popping up and down.The staff were so attentive here, that despite being a large hotel, there was  an intimate feel.

The restaurant we dined at, Kitchen Club offers a blend of Egyptian fare with international fare,  don’t fear oat milk lattes still on tap. Curated by head chef Edwin Gomez, small plates and dishes from around the world comprise the substantial menu. From classic light lunch fare of club sandwiches to falafel wraps, colourful salads to grilled salmon and steak.

The on site spa here is sensational, we had a vigorous massage by Thai ladies which left us 10 ft taller, and there is beautiful features within this secluded sanctuary to enjoy for all guests. Comprising of a a pool, two sauna, steam rooms, plunge pools and a hammam, is is the perfect place to retreat to when it starts getting chillier towards the end of the day. 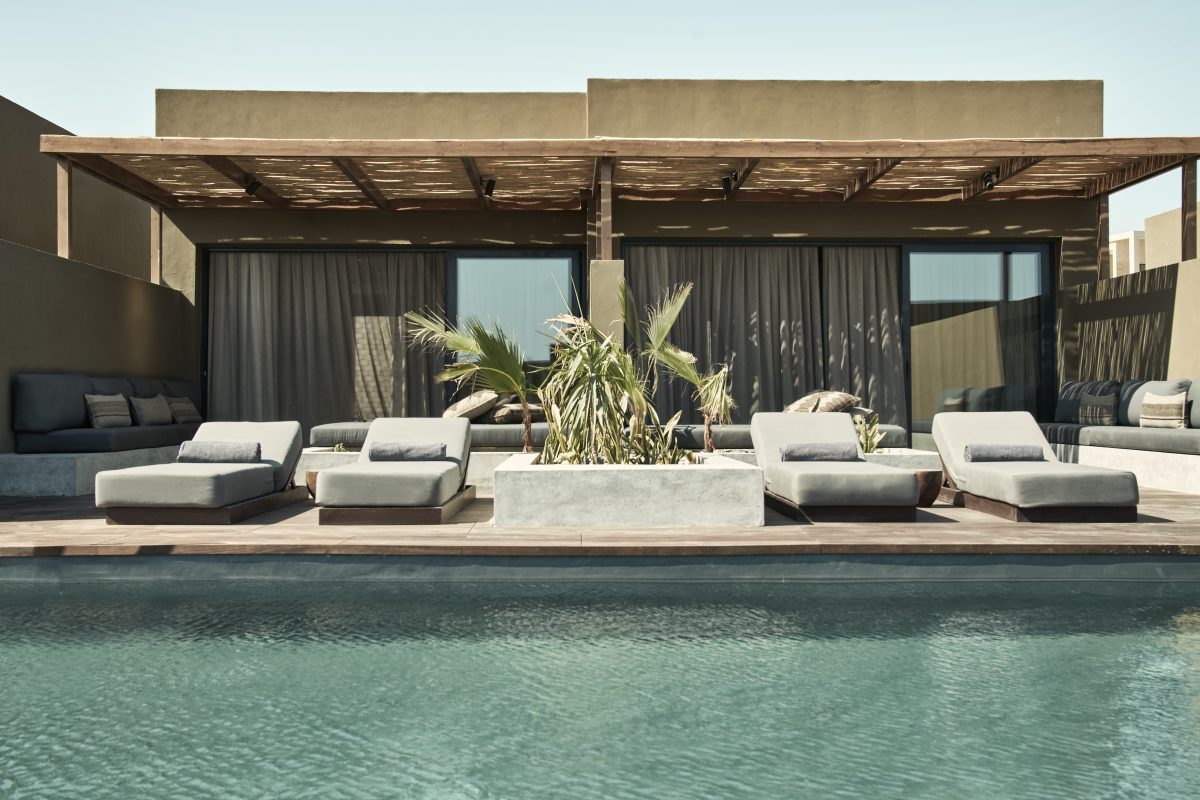 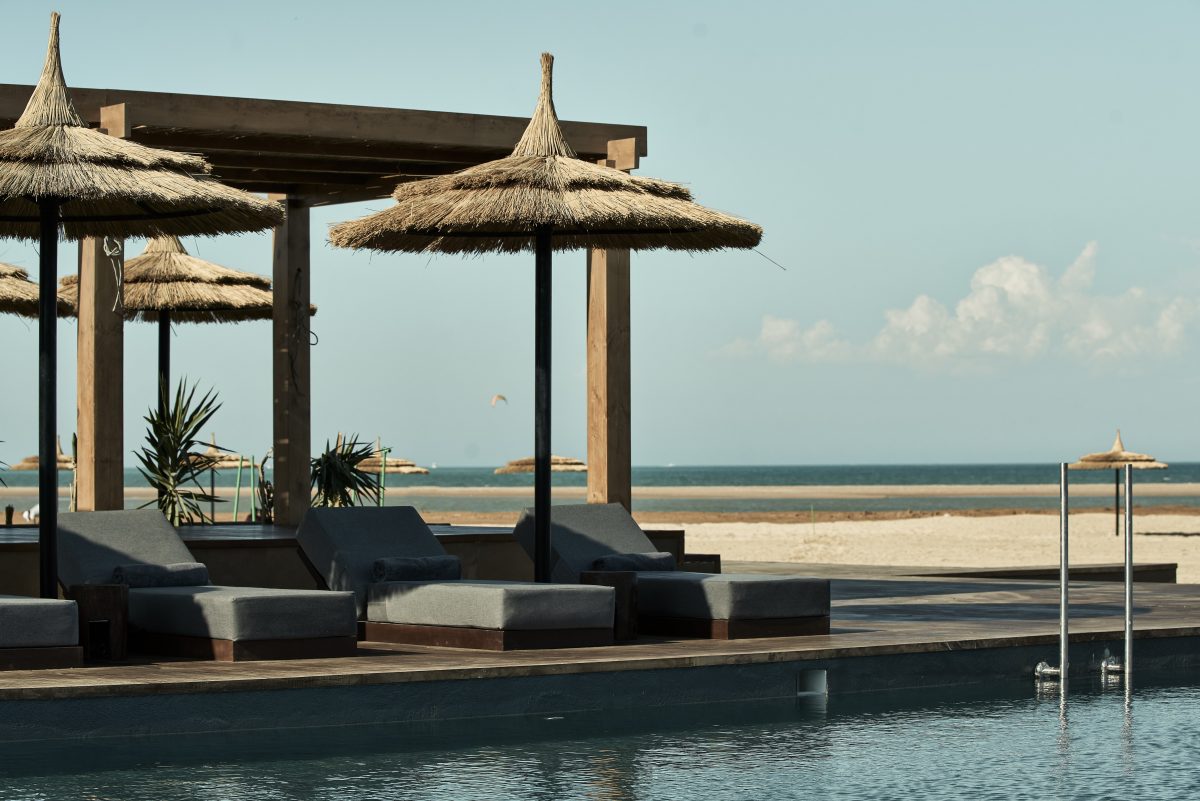 El Gouna: Where to Eat 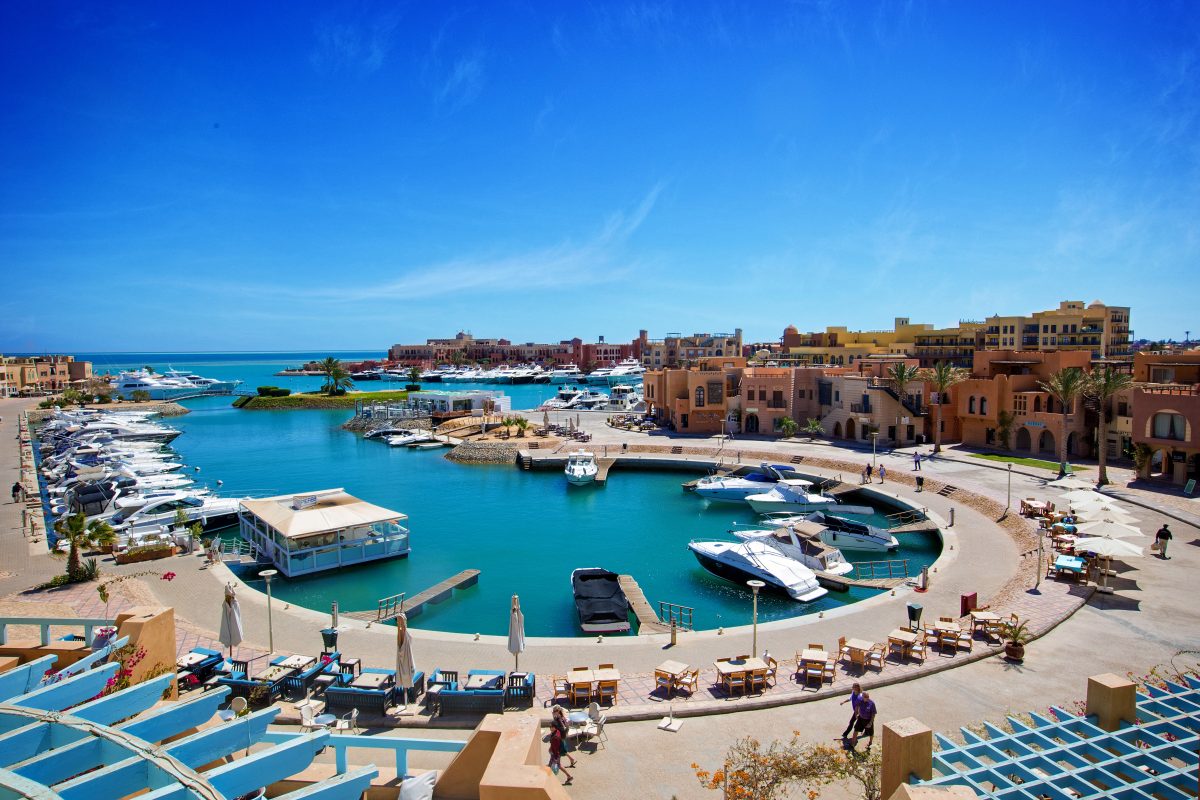 If you decide to leave the tranquil vibes of the Casa Cook here are the best two spots we tried.

A international restaurant that wouldn’t’ be out of place in London. Opt for the chateaubriand for two for melt in the mouth meat and the curly fries ( a delicious throwback to being young again).  Start with the grilled calamari. Sit outside and watch the yachts gleaming in the marina.

This is where you go for your traditional Arabic meal. It is a set menu, so if you go in a two make sure you get everything. We dove into freshly cooked pitta bread from the oven outside, a variety of meze including a moreish baba ghanoush, followed by a lentil and a fish soup. The main course mixed grill was served on mini grills that sat on our table, ensuring the meat kept warm while we dove in which we had with a fish tagine, of fresh flakey fish in a tomatoey sauce.

El Gouna, Egypt: What to Do

Afromentioned fly and flop was key on the agenda but we had a magical day out snorkelling in the Red Sea hosted by the tour company Meeting Point. I have snorkelled all around the world, and was astounded by just how vibrant the Red Sea was, better than Mauritius. The coral was incredible and shoals of rainbow fish filled us with joy as we paddled under the trusty eyes of the Chloe Diving boat crew. Setting off first thing, they took us snorkellers and divers to three spots in the Red Sea broken up with a home cooked lunch, made in a tiny kitchen, but surprisingly delicious and hugely reasonable.

If we had more time we definitely would have tried kite surfing. Choose from one of the 7 kite surfing centres, this is the place to learn. 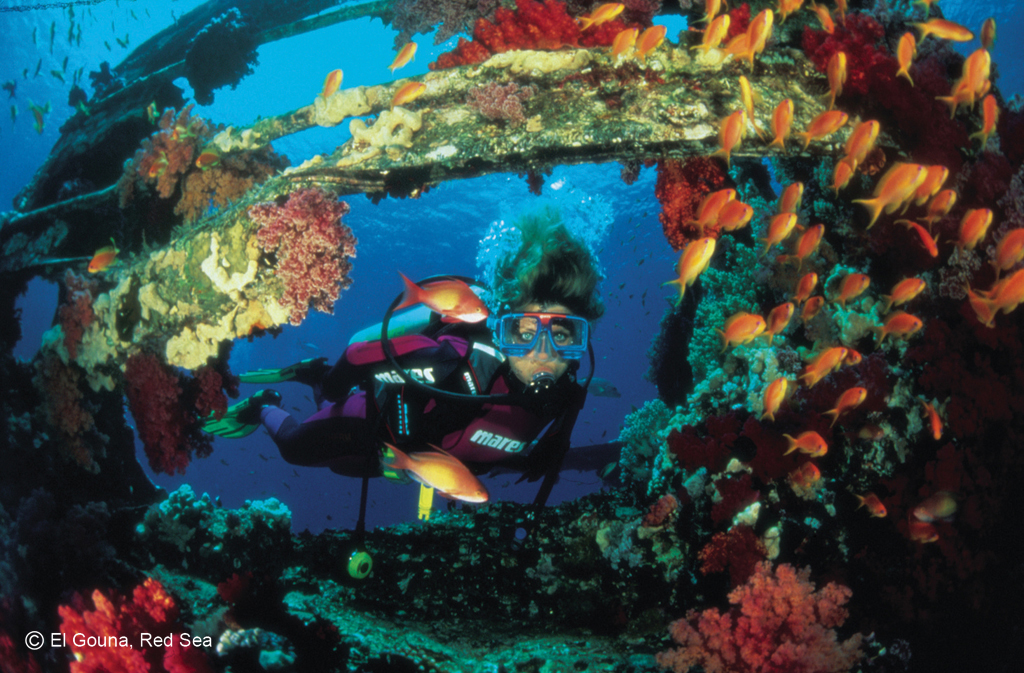 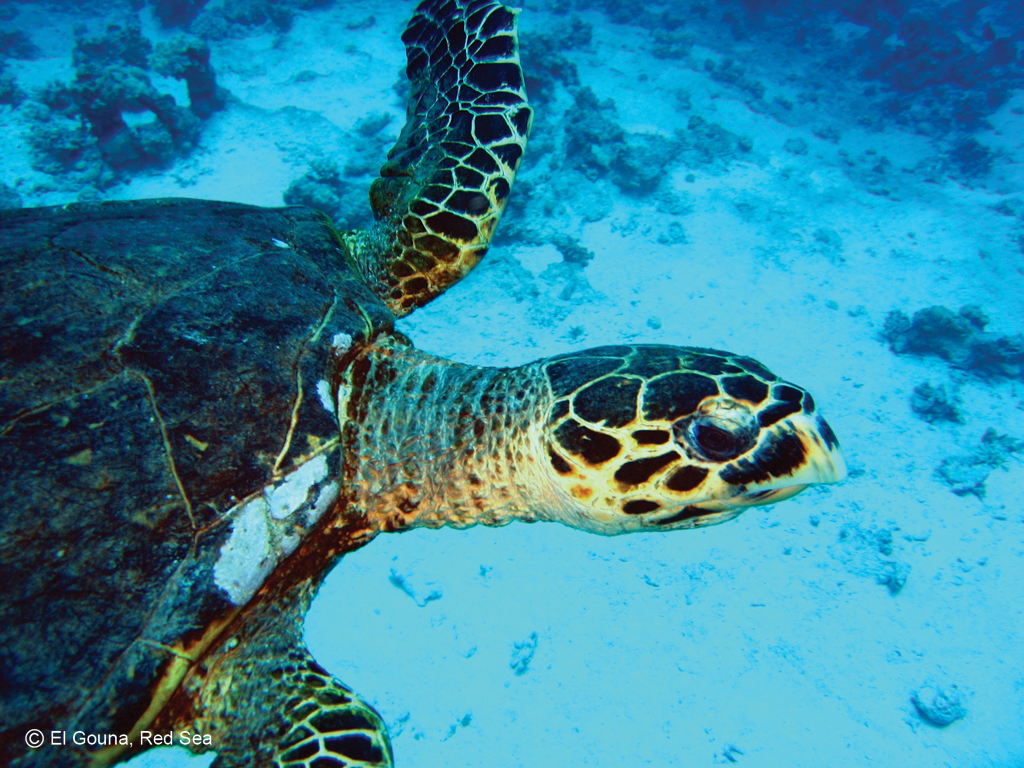 El Gouna, Egypt: How to Get there

El Gouna is easily accessible for British travellers, with flights offered by British Airways, EasyJet, Pegasus, Turkish Airlines and Egypt Air into Hurghada. Take the five-and-a-half-hour journey in the morning and be there for dinner.

Notes: We were hosted by Orascom Hotel Management and the trip was supported by the Egyptian Tourist Board

5 of the Best: European Destinations to Visit in 2022