It’s about time you discovered Tokyo’s best neighbourhoods – here’s everything you need to know about our favourite places in the city, including what to do, where to visit and how to get there. For more inspiration, learn more about the best places to visit in Tokyo on Dealchecker’s blog here. Let’s talk Tokyo: 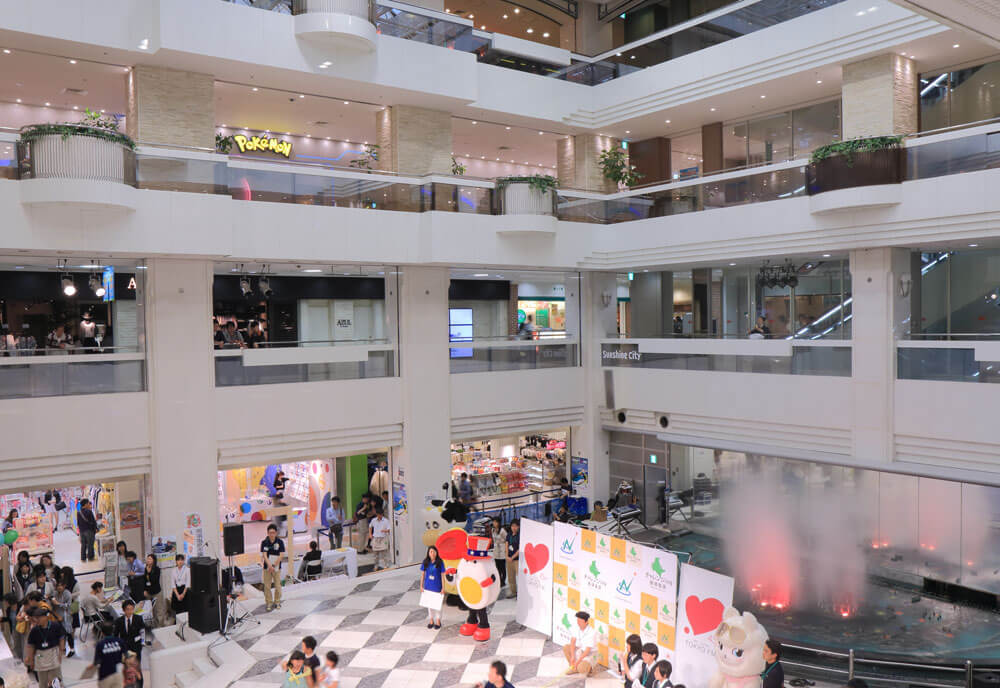 Busy, bustling and always full of life, Ikebukuro is a humming commercial and entertainment district with much to offer the curious Tokyo visitor. Never knowingly mediocre, its most renowned mall, Sunshine City, is home to an aquarium, planetarium and amusement park, surrounded by streets that simmer with performances and anime enthusiasts touting their wares. What really makes this neighbourhood tick however, is its foodie scene. Aromatic stalls selling succulent gyoza and frothy bowlfuls of ramen can be found on every street corner, and experimental culinary enthusiasts have set up shop in Ikebukuro’s countless avant-garde restaurants, noodle bars and, that’s right, cat cafes. Seeking a real taste of Tokyo? You’ve found it! 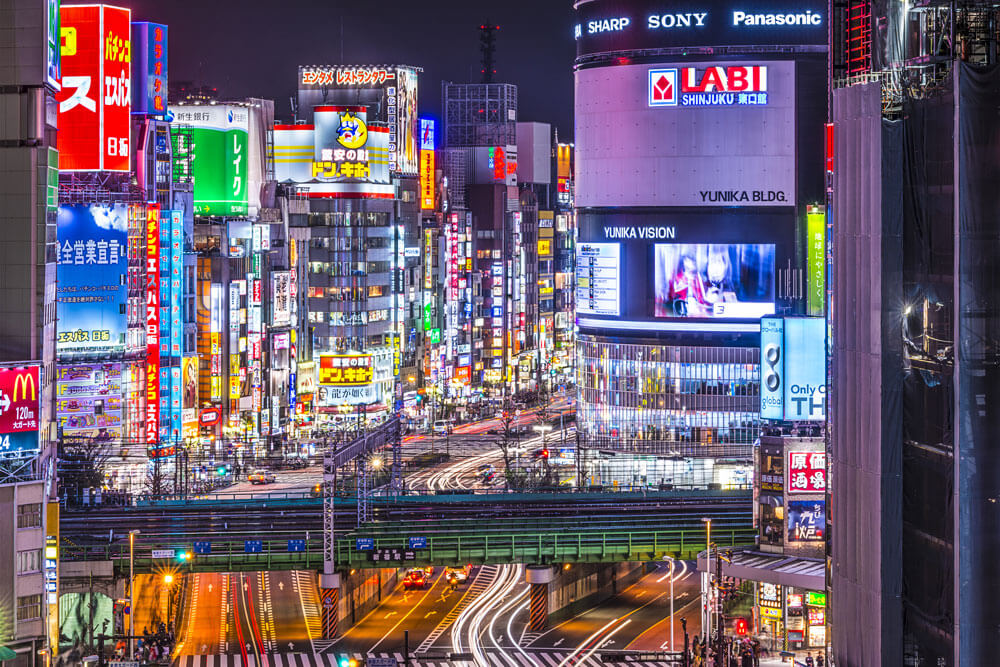 Fast-paced and endlessly energetic, Shinjuku is at the helm of all things business and commercial in the city. With street upon street and plaza upon plaza of designer boutiques, glimmering malls, K-Pop shops and rickety stalls, if you’ve got Yen burning a hole in your pocket, this is the place to spend it. Shinjuku’s Koreatown is a tangle of fragrant street-food, life-sized anime characters and trashy karaoke bars in which to warble away an evening. As well as some of Tokyo’s most vibrant and ebullient nightlife, Shinjuku is also home to the city’s busiest train station – its endless cycle of commuters seething through barriers on the daily commute is worth witnessing alone.

A trendy, canal-side enclave of the Meguro District, laidback Nakameguro is best enjoyed in full bloom, when the iconically Japanese cherry blossoms embellish its narrow streets and hang in garlands across the water. It is also during this season that Nakameguro’s canal is lined with food stalls and pop-up bars, and residents spill out to soak in the atmosphere. As you might expect of a hip, city hangout, Nakameguro has more than its fair share of chic coffee houses, vintage stores, izakayas and bookshops, most of which can be found along the buzzing Nakameguro Ginza, which also happens to be the district’s oldest shopping street.

Renowned the world over for its unique, candy-pop-and-sparkles trends, Harajuku explodes from Tokyo’s streets in a kaleidoscopic cataclysm of colour, cosplay and Kawaii. Often revered as the city’s fashion capital, this flamboyant congregation of self-styled icons is Tokyo at its most spirited, youthful and experimental. The neighbourhood’s Takeshita Dori is the hub of all things Harajuku-cool – a street lined with neon fashion shops and boutiques overflowing with weird trinkets and wacky costumes. Omotesando Avenue adds an element of elegance and class to the area, often referred to as ‘Tokyo’s Champs-Elysees’ and home to a sprinkling of high-end restaurants and designer stores. Whatever your style, Harajuku welcomes you into its fold – come as you are, and leave as you want to be. 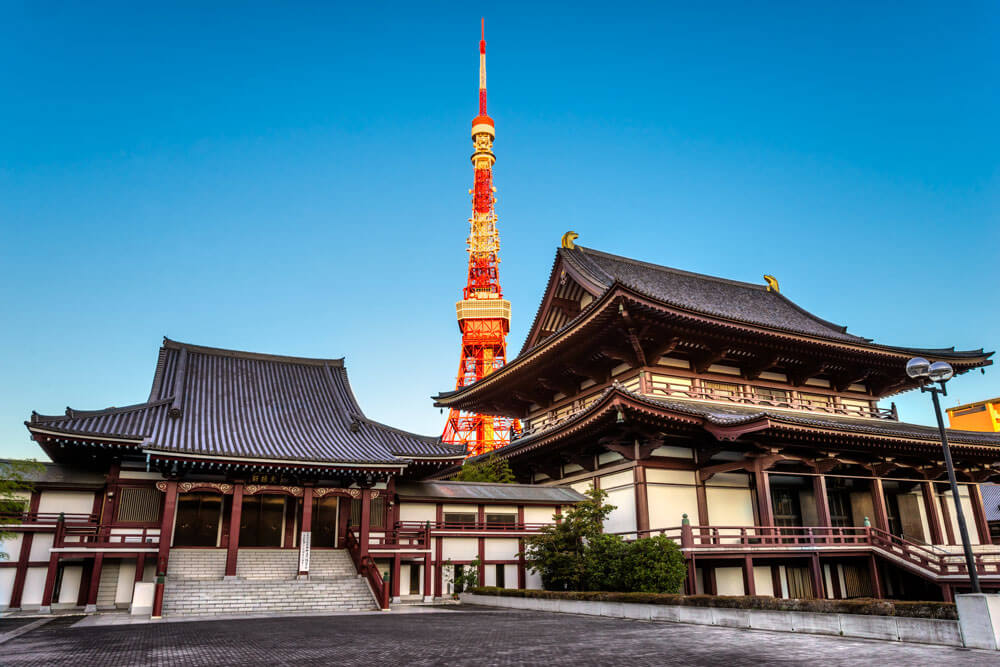 The suited and booted professional face of Tokyo, Minato is the city’s heaving financial district with glittering skyscrapers and glistening glass surfaces a-plenty. After dark, Minato loosens its tie and really lets its hair down, with lively clubs, bars and venues throwing open their doors and staying open way past the early hours of the morning. By far the most vibrant of Minato’s nightspots is the pumping Tokyo Bay, a waterfront row of slick bars, lounges and exclusive clubs. As well as being the scene of many a night of hedonism, Minato is also home to many of the city’s most iconic landmarks, from Tokyo Tower to Rainbow Bridge. 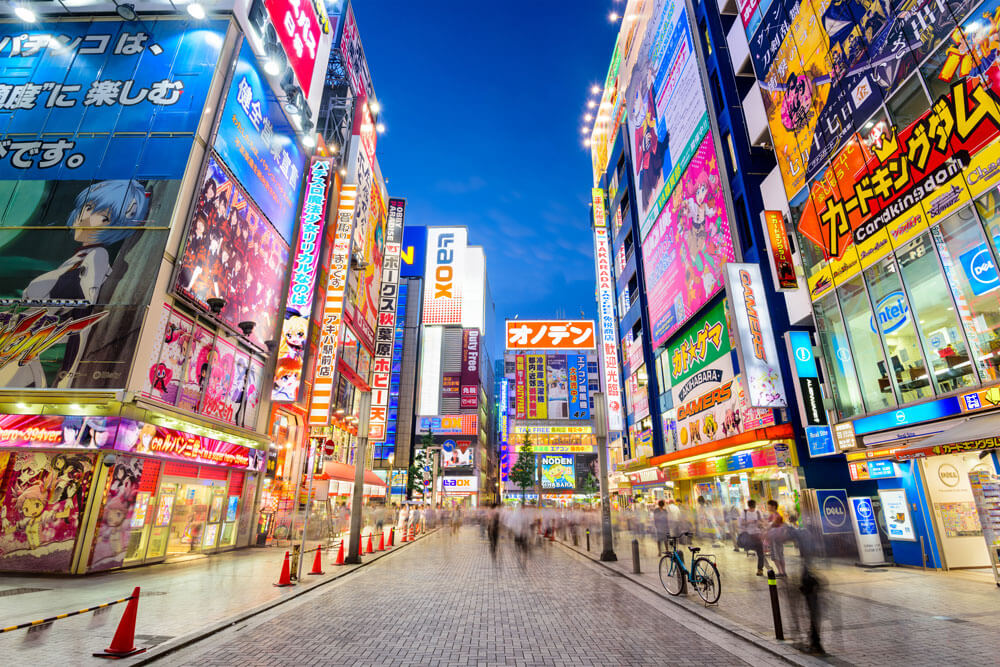 Otakus, manga fans and die-hard cosplayers, this is your stop. With its explosive, multi-coloured, day-glo energy, Akihabara or ‘Akiba’ as it is fondly known, is the beating, cartoon heart of Tokyo’s world-famous pop culture. The neighbourhood’s main street is a seething, flashing hub of neon adverts, anime graphics and crowds of cosplaying teenagers, with even its flanking buildings painted a glorious range of acid colours. Akihabara was given the nickname ‘Electric Town’ following WW|| on account of its booming trade in technology and electrical goods, and the title is as true today as it was back then. Basically, if you’re looking for the Tokyo characterised by twee Maid Cafes, futuristic technology and outlandish fashionistas, this is the place to be. 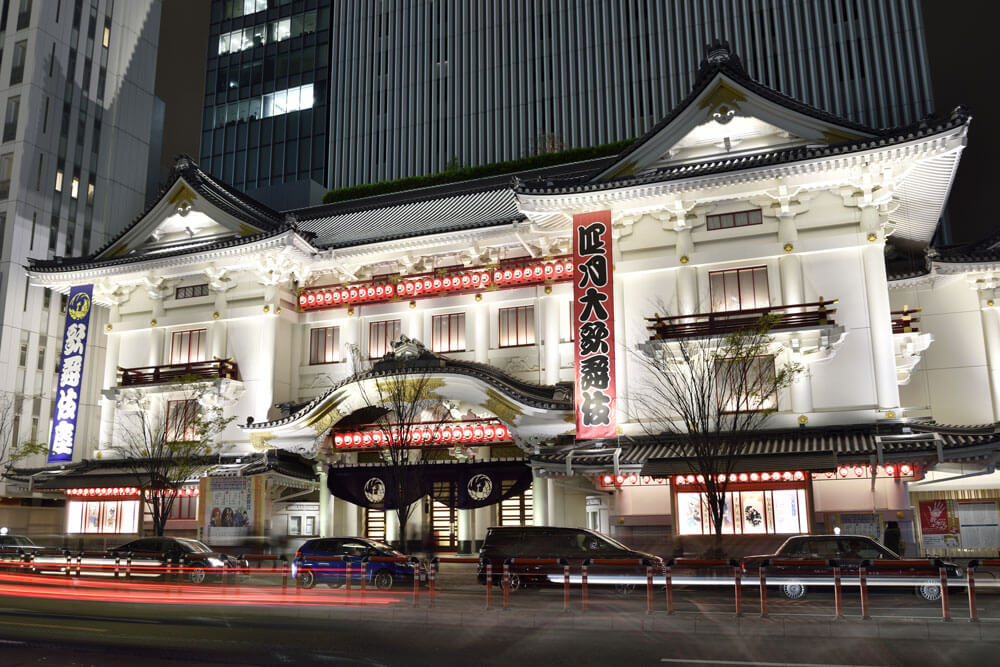 Glittering, glamorous Ginza offers a taste of the finer things in life. From its rows of upscale designer stores and chic boutiques, to sleek galleries and exhibitions, this neighbourhood is the haunt of Tokyo’s fashion-conscious stylistas and elegant celebs. From dazzling plazas wafted across by couture-clad locals, to endless decadent dining options, Ginza is renowned as Tokyo’s purveyor of luxury. As much as the lengthy Chuo Dori Street is an innovative, brightly-lit shuffle of contemporary culture, this neighbourhood also fuses Japan’s future with its past by way of ancient architecture, quaint tearooms and Tokyo’s most famous Kabuki theatre.

For a Vibrant Neighbourhood: Tsukiji 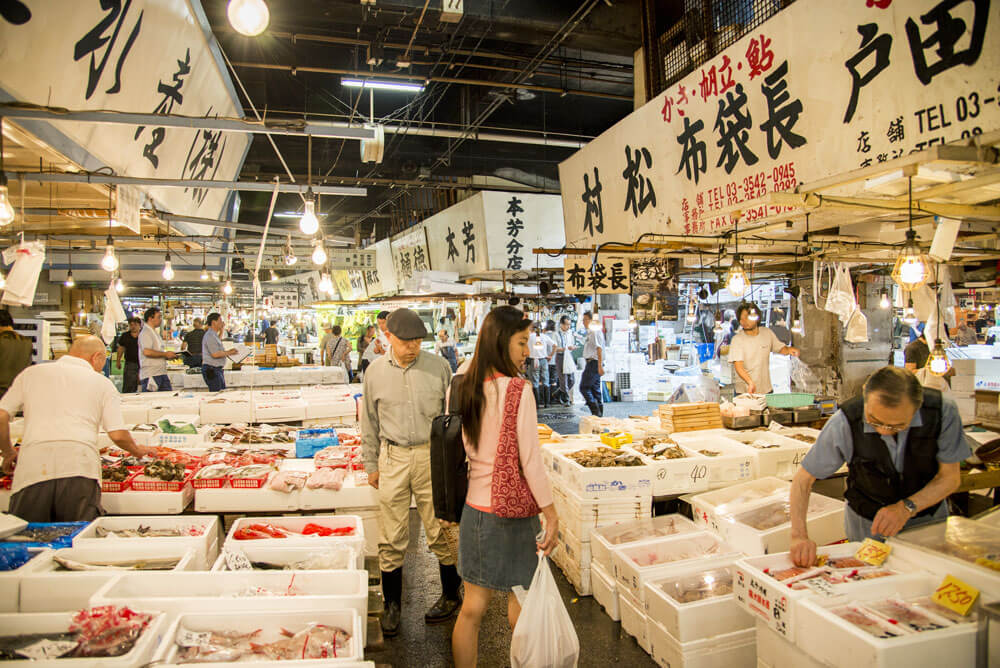 Loud, bustling and brimming over with bargains, if Ginza is Tokyo’s chic boutique, Tsukiji is the city’s hectic, vibrant marketplace. Perched within Tokyo Bay along the Sumida River, this neighbourhood has long made its living through the fruits of the sea – a fact hard to forget as you explore the streets lined with sashimi bars, come face to face with the world’s biggest wholesale seafood market and are woken at dawn by lively tuna auctions. Amidst the chaos however, Tsukiji is home to a handful of breathtaking shrines and secret gardens, which offer a welcome slice of sanctuary. 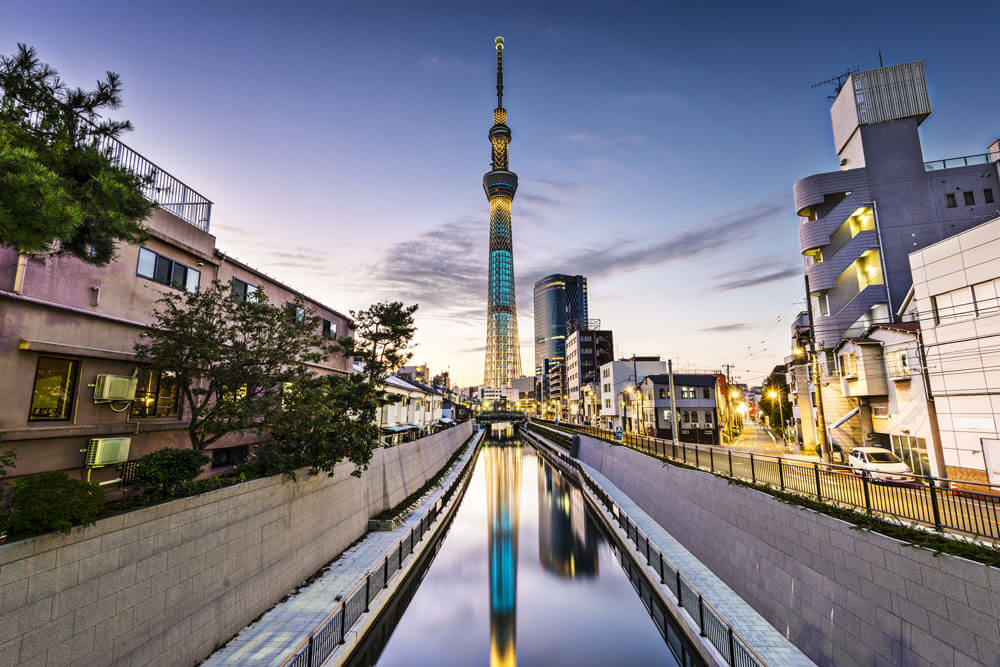 Set aside the boundless energy of the city’s financial and commercial hubs, Sumida is a calming call from the past, characterised by rustic bath-houses, wooden residences and shady gardens framing the river. Sumida is also greatly influenced by ancient sumo traditions, which culminate in baying crowds of supporters at Ryogoku Kokugikan arena. As much as the neighbourhood has one foot firmly rooted in the past, Sumida echoes Japan’s contemporary reputation with its burgeoning art scene, manifested in collaborative, creative spaces, edgy cafes and community art projects.