When high-street stores start to sell 3 rolls of wrapping paper for a quid, you know it’s ice skating time. And no where puts on better festive skating rinks than our fair city. From rooftop rinks to skating past the city’s most iconic buildings, the festive season is all about bundling on the layers and trying to make it round the rink in one piece. It doesn’t matter if you’re Bambi on ice or the next Torvill and Dean – here’s the best places to get your skates on in London this winter:

1. For Skating with a View: John Lewis Rooftop 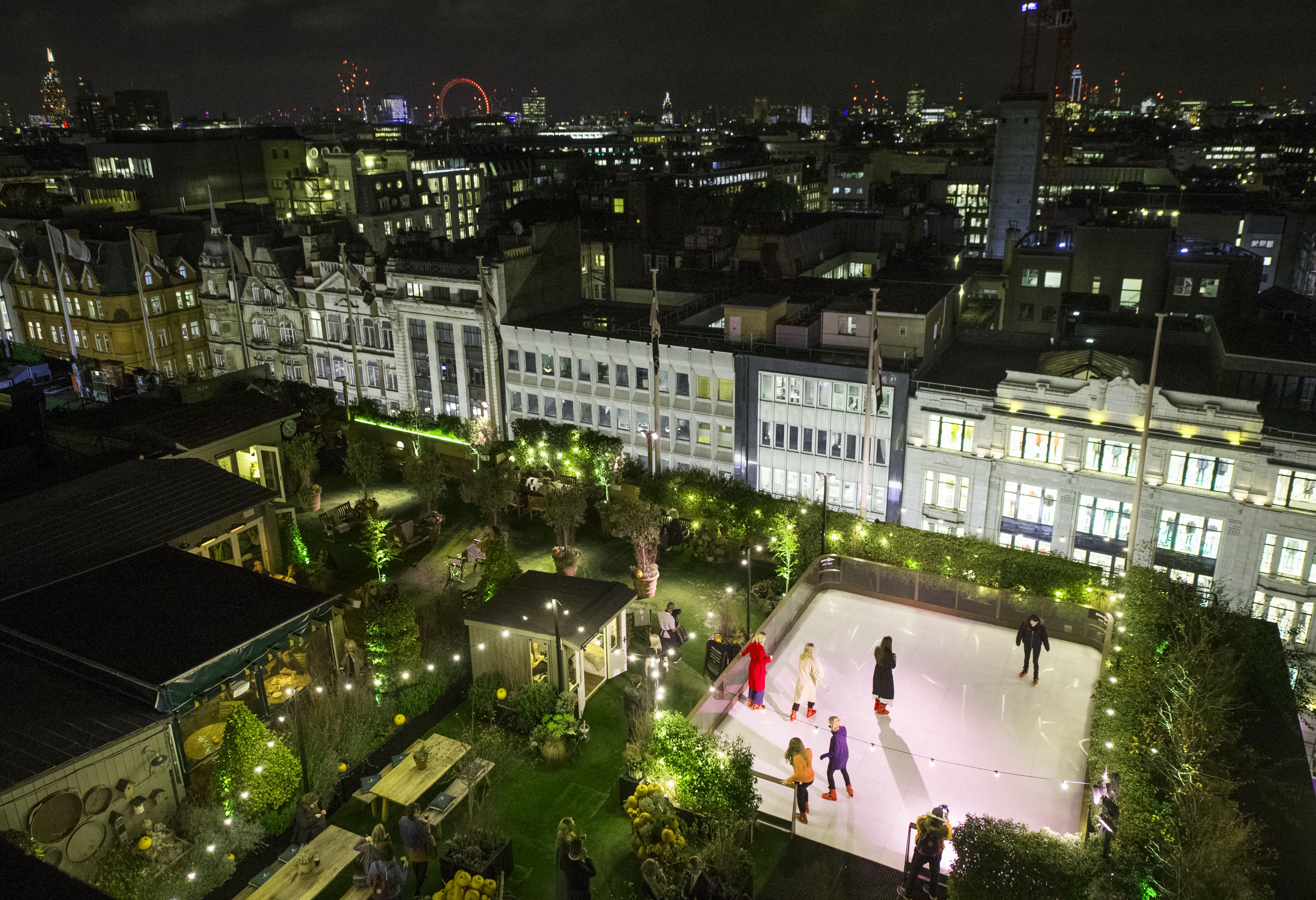 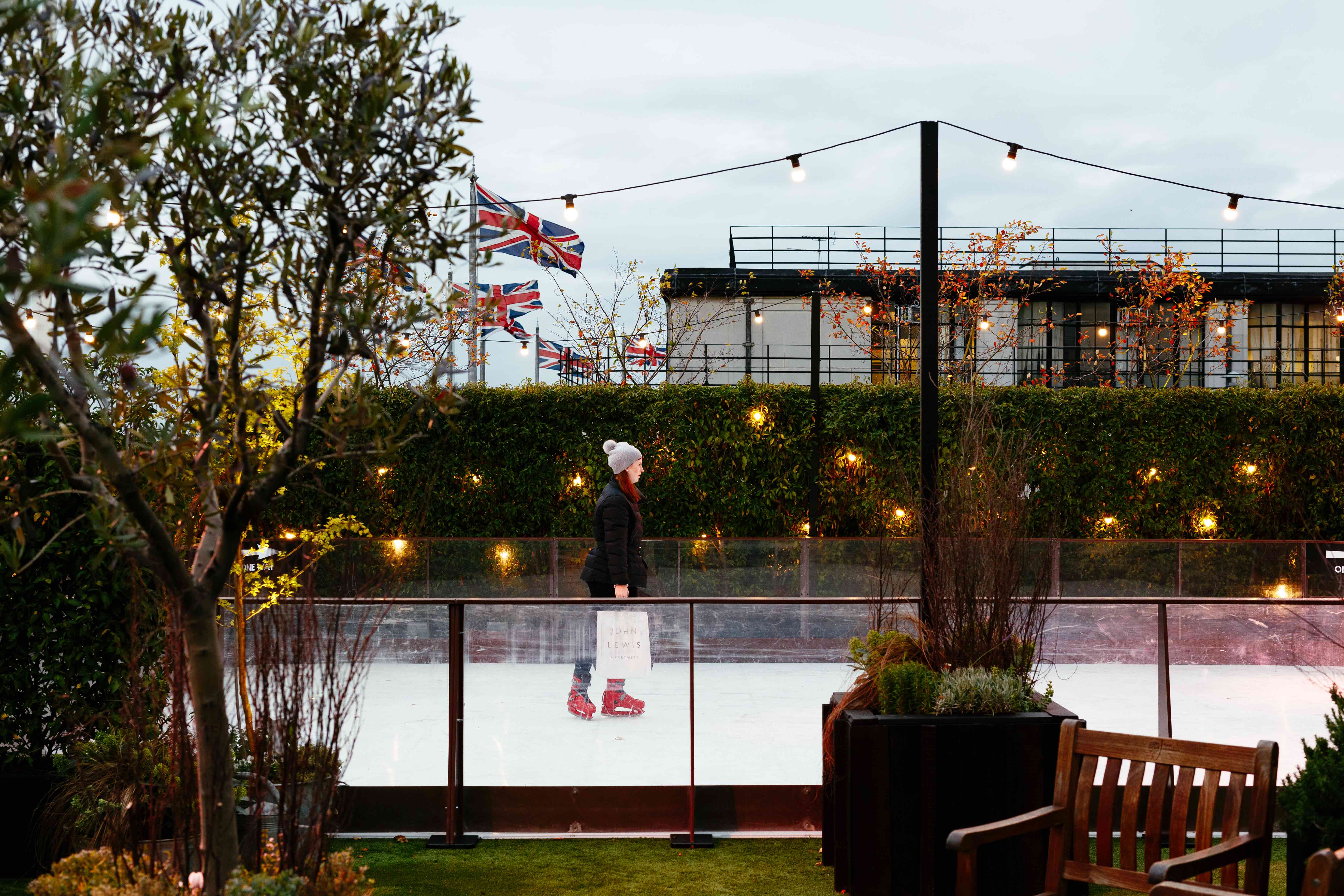 The Rundown: John Lewis & Partners has launched the ultimate winter hideaway in collaboration with Sipsmith Gin. The winter rooftop draws inspiration from the hedonistic frost fairs that took place on the frozen River Thames during the cold months of the 17th Century, when shop owners would set up stalls selling hot gin to hundreds of delighted Londoners.

What to Expect: For the first time ever, the rooftop is now home to an ice skating rink, allowing you to practice your pirouettes above the heart of central London. There’s also bookable hot gin hideaways kitted out with throws and faux fur cushion as well as gin cocktails on tap.

The Rundown: Is it even winter without a trip to Somerset House’s ice skating rink? Absolutely not. By far one of the most popular festive attractions in the capital, the stunning Edmond J. Safra Fountain courtyard is the backdrop to London’s most beautiful ice rink, where you can skate day or night.

What to Expect: Visit in daylight hours, or head in the evening for Skate Lates. Proving an open-air party whatever the weather, this year’s Skate Lates celebrates the best of cutting-edge sound, from hip hop and R&B, with the all-female DJ crew Rock The Belles, to house and grime with some of Rinse FM’s hottest DJs. 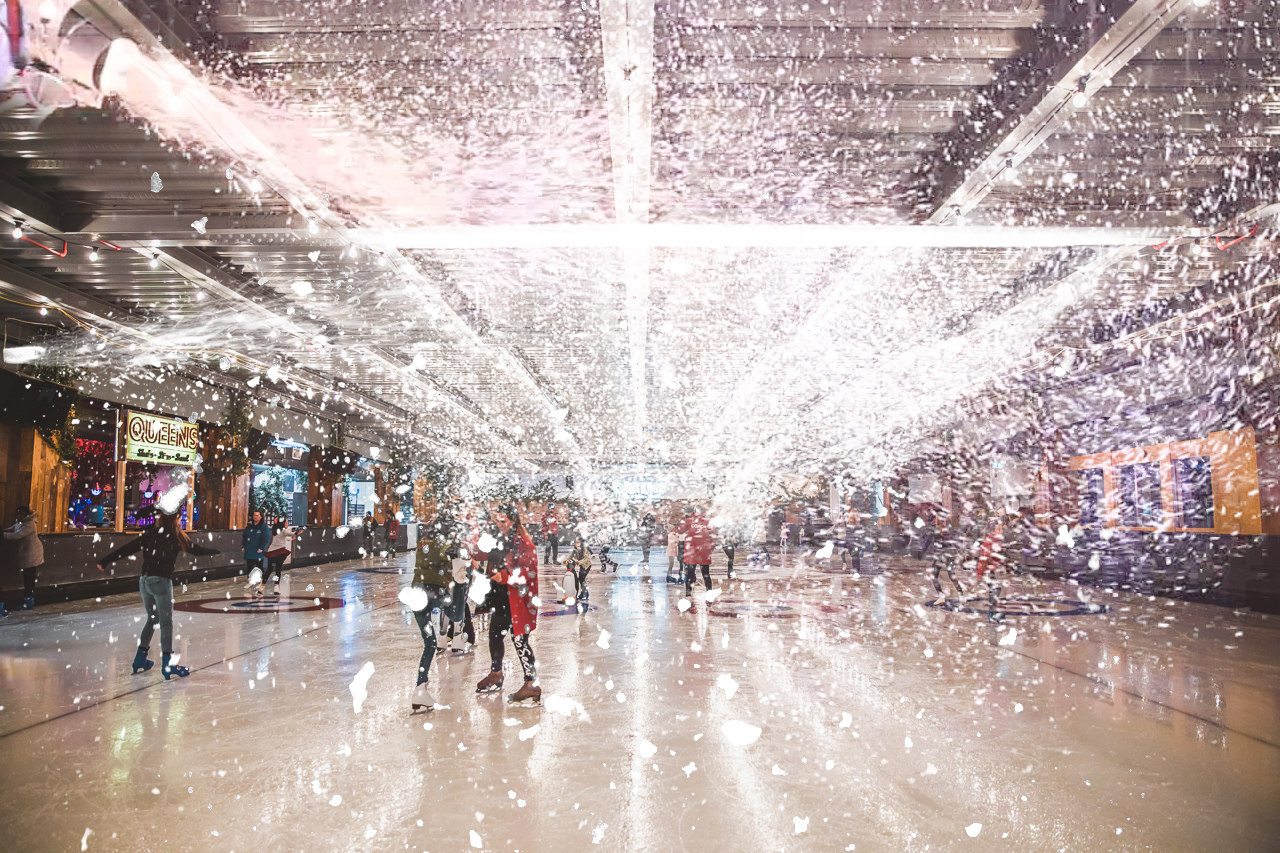 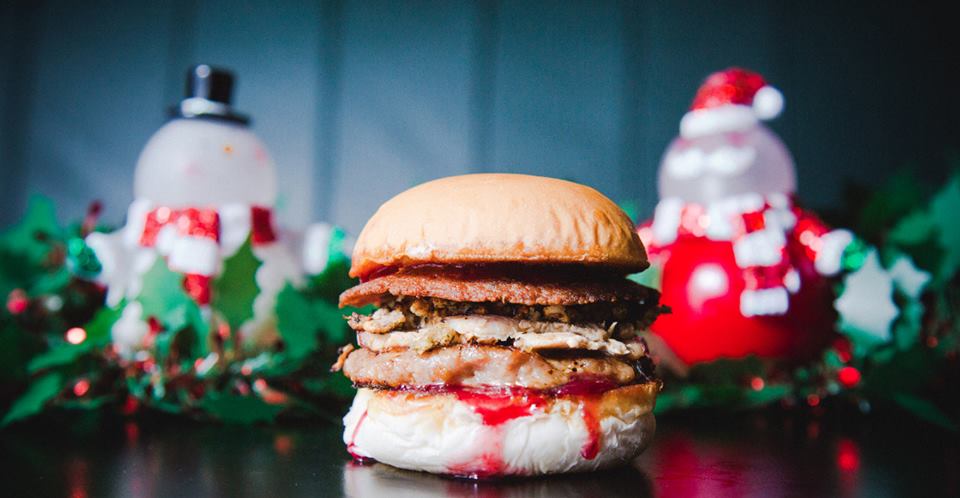 What to Expect: QUEENS have taken inspiration from Frozen, and have decked their super-sized skating hall into a winter-filled paradise, snow and all. Show off your best Mariah Carey and Wham! renditions whilst skating as QUEENS have introduced sing-a-long sessions on the ice. Taking place every Saturday, expect weekly sing-a-long screenings of the nation’s favourite Christmas classics.

Eat and Drink: Christmas bites by MEATliquor. Think stick to your ribs Turkey Cheesesteak, featuring free-range Herons Farm roast turkey bathed in gravy with melted camembert, crispy stuffing crumbles and cranberry sauce. And the Christmas cocktail, XXXmas pudding, a blend of mulled brandy shaken with fresh lemon juice, a hint of sugar cane, a dash of bitters an served in a pudding with a flamed orange twist.

4. For All the Winter Fun: Winterville 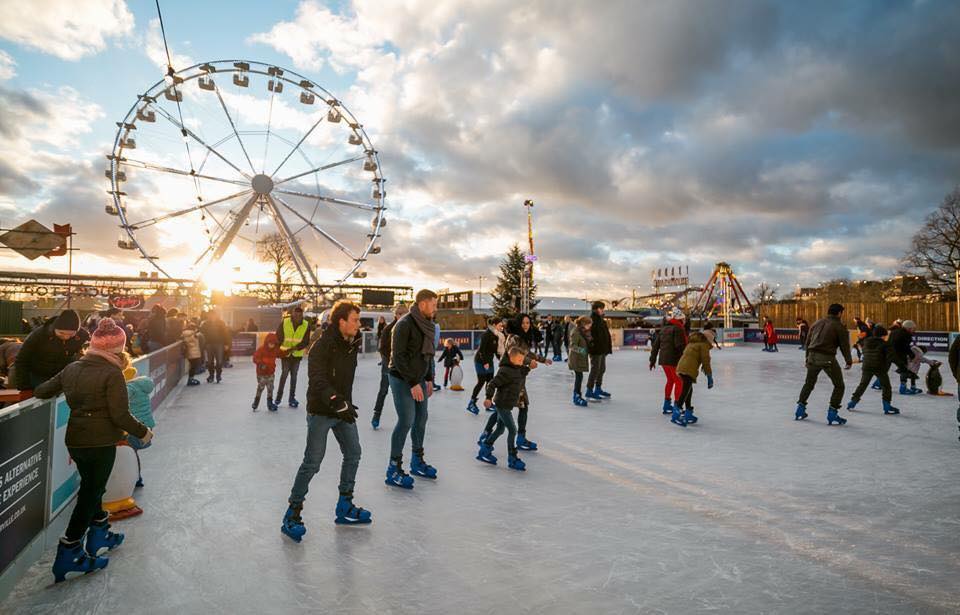 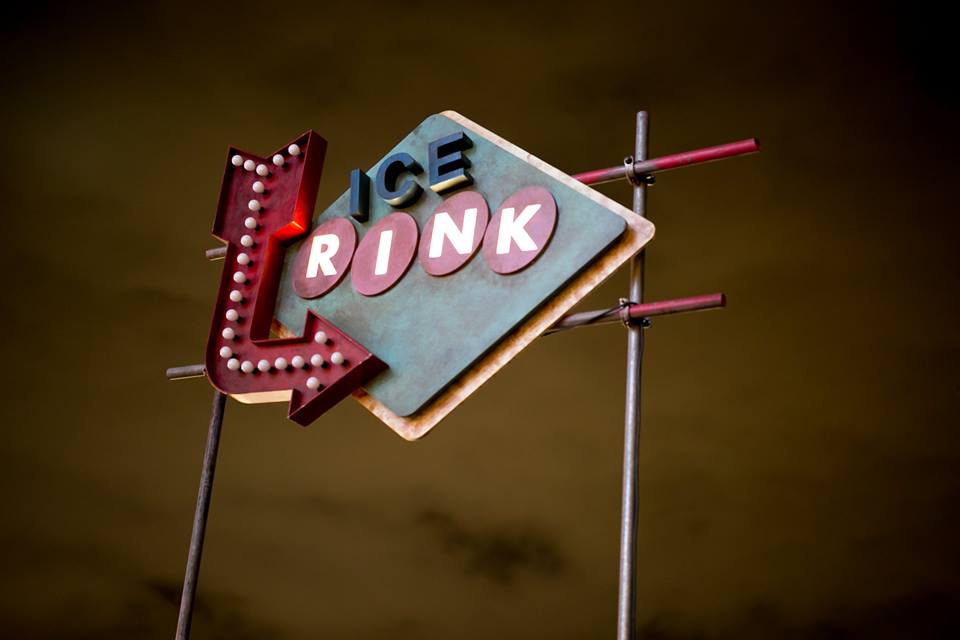 What to Expect: Winterville’s open air ice rink is 600m2 and constructed from real ice. It’s open Tues to Sun and suitable for all abilities. If gliding across Clapham Common doesn’t appeal, then stay warm and hydrated in the neighbouring cafe, where you can check out all the action in comfort. 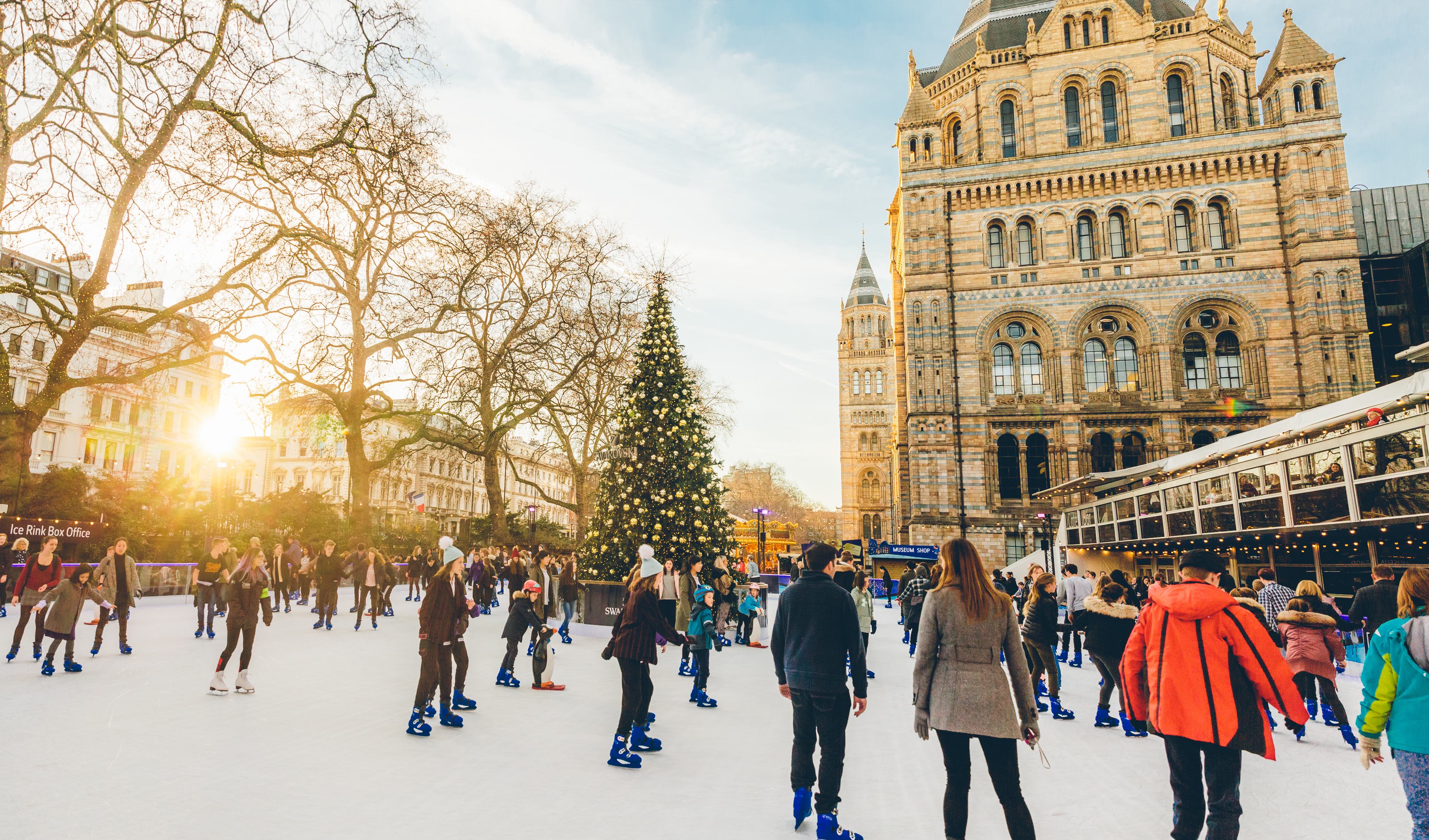 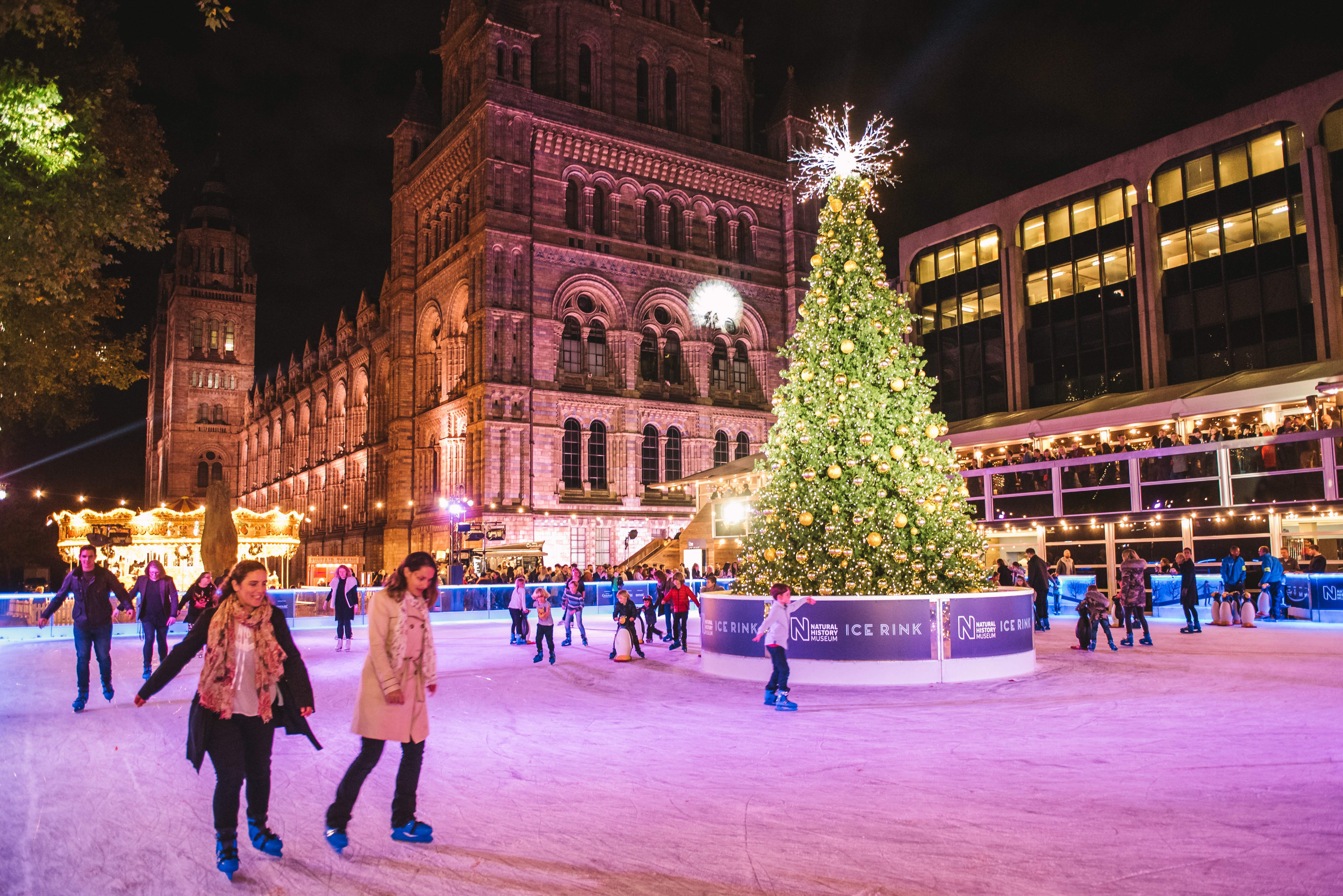 The Rundown: The ice rink at the Natural History Museum is one of the most magical places to be this winter. The Café Bar has a bird’s-eye view of the rink, and is open daily until the ice rink closes. Even if you’re not skating, you can swing by for a hot choccy and a wedge of cake.

What to Expect: Against the iconic backdrop of Alfred Waterhouse’s spectacular building, this huge 1,000 square metre ice rink, with a sparkling 30ft Christmas tree adorned with twinkling fairy lights (76,000 of them, no less) as its centre piece, makes for a pretty special skating experience.

6. For a Rooftop Rink: Skylight 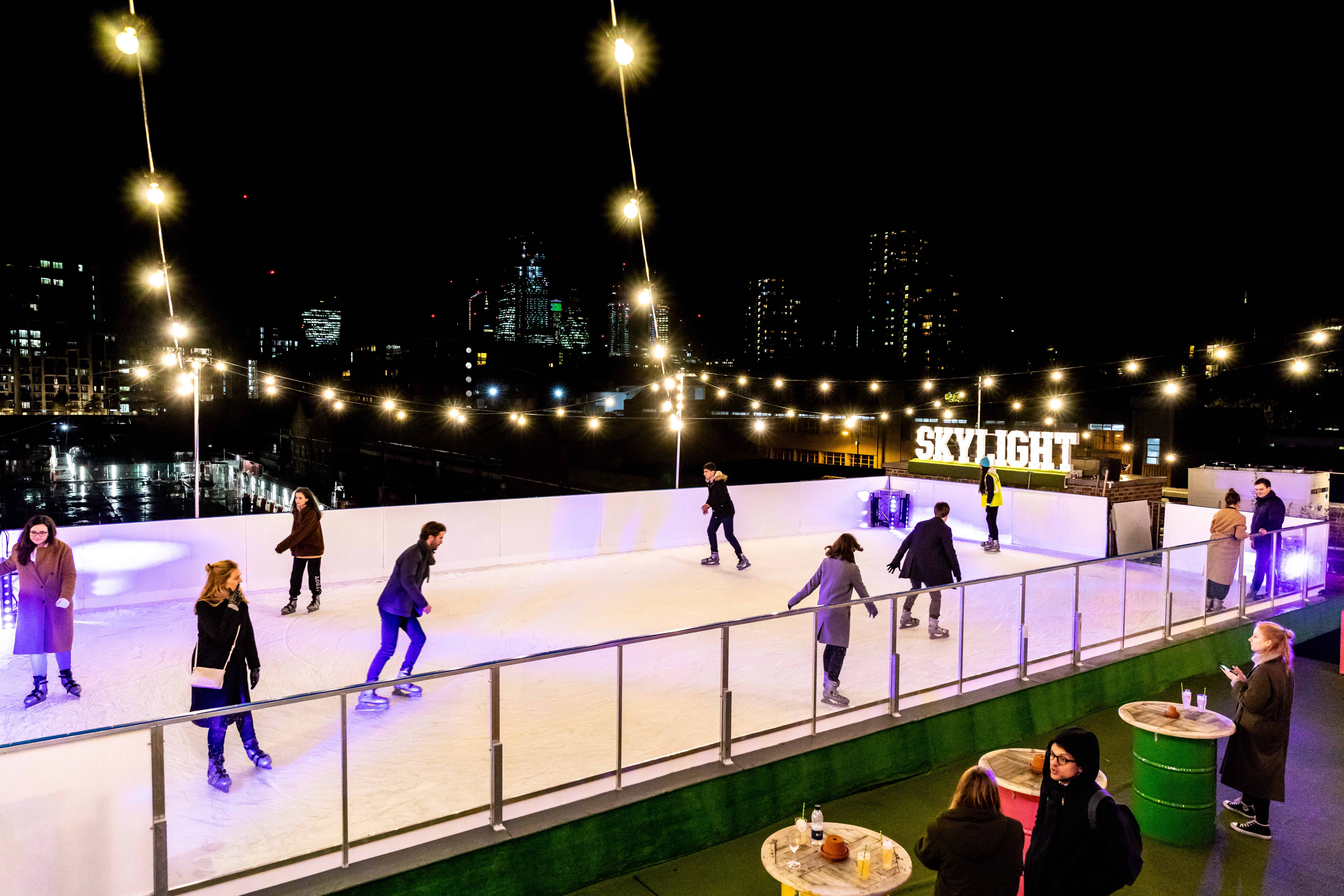 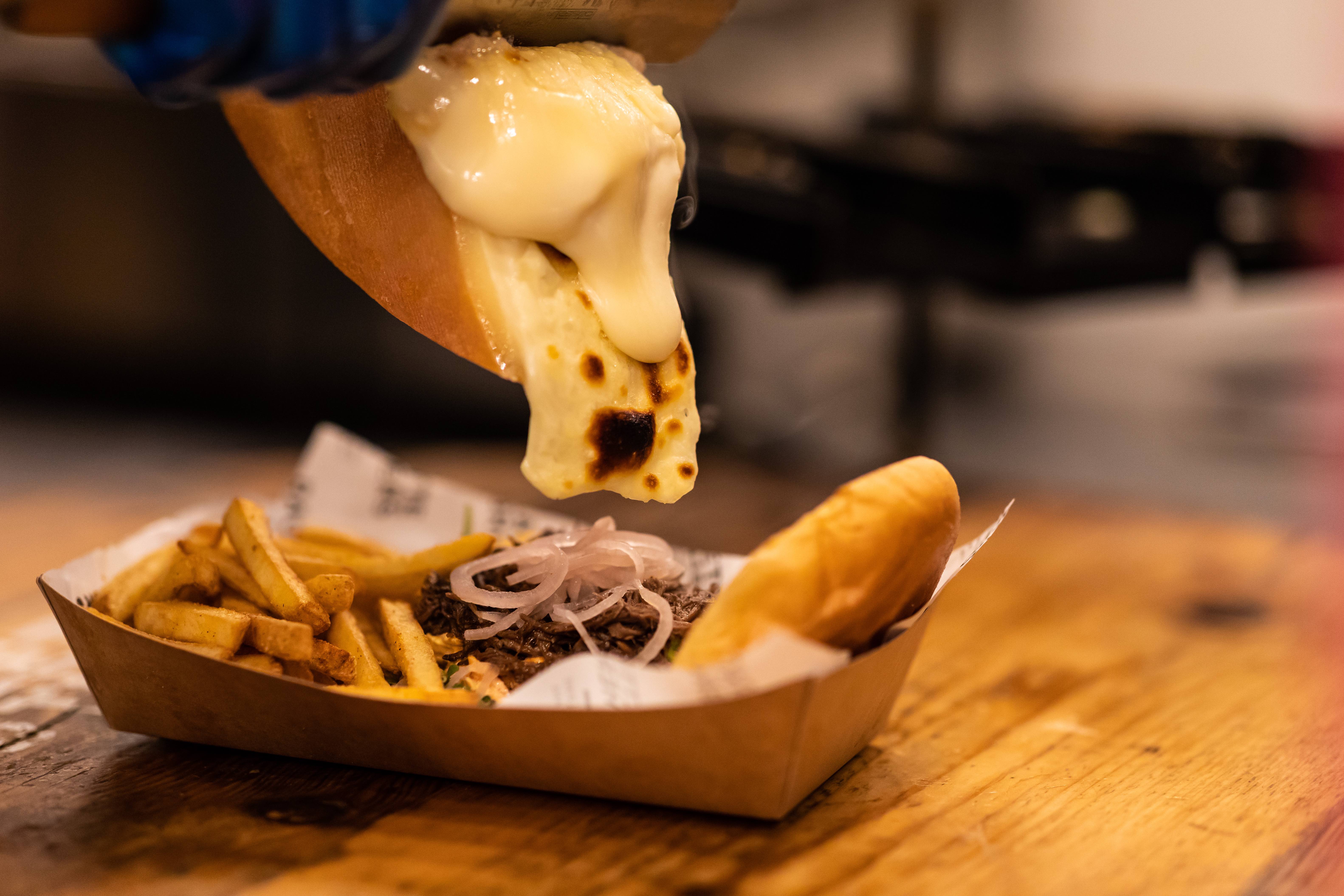 The Rundown: Themed around an urban après skate bar, Skylight, the three-story east London venue, features a  rooftop ice rink, seasonal cocktails, ice hockey shooting, DJs, brand new igloos and huts, and some of the best views in the city.

What to Expect: Skylight is home to Europe’s only real-ice rooftop ice rink, which shares the main level with the pergola bar. Cosy igloos and mountain huts are a new addition this year, and there’s plenty of après skate bars serving a delicious array of warming winter cocktails, 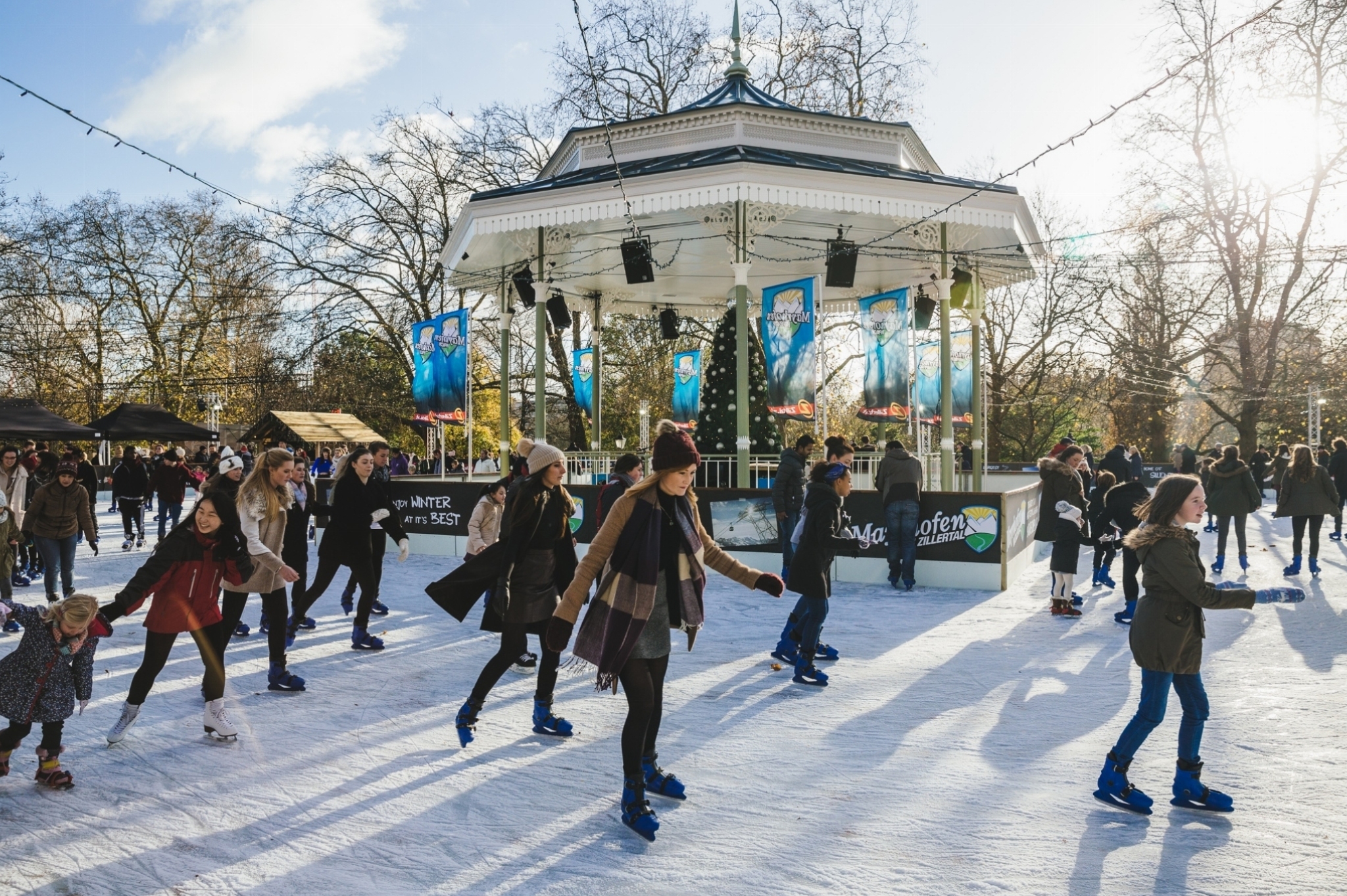 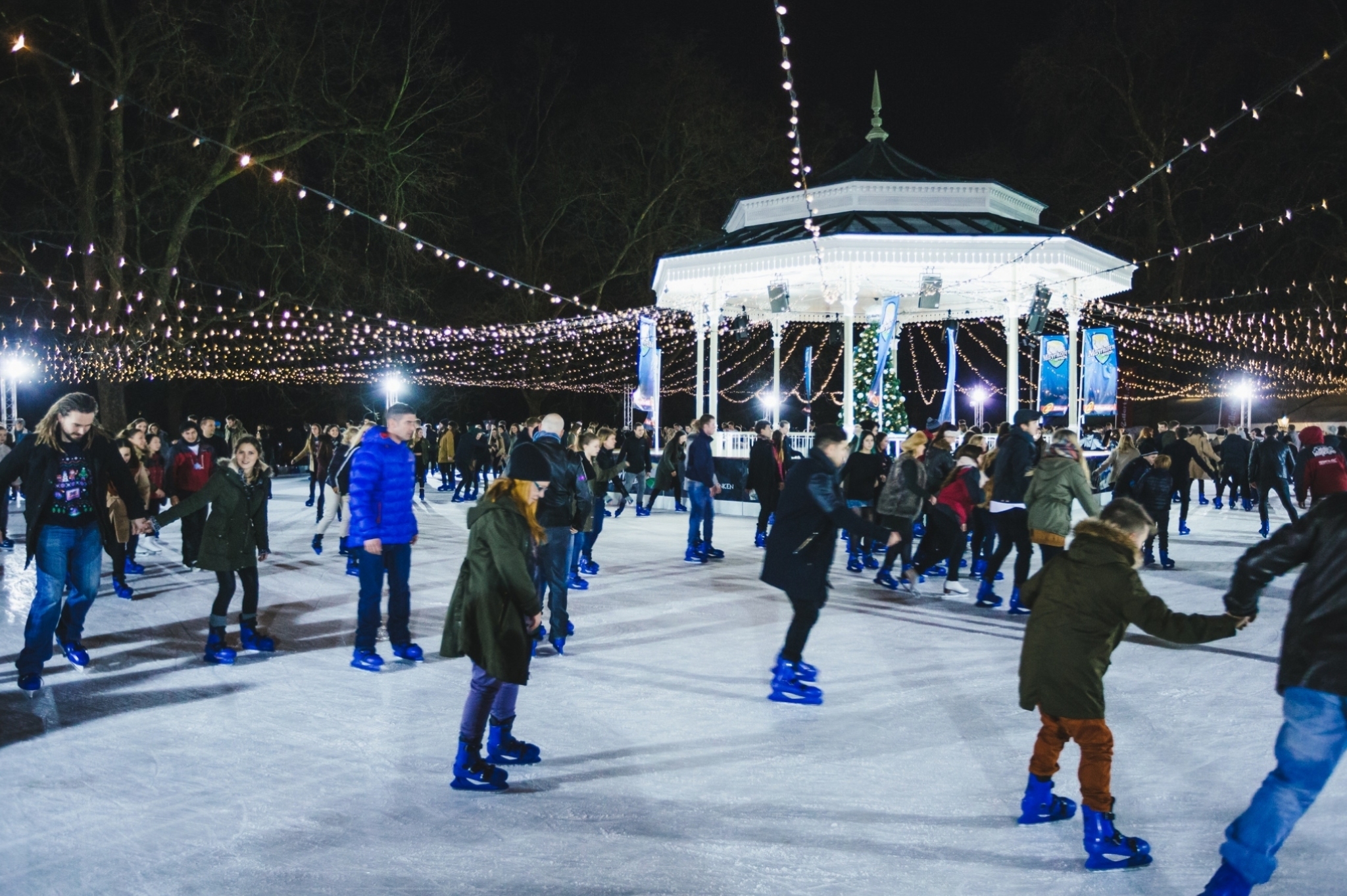 What to Expect: The UK’s biggest open-air ice rink is back for 2018… but this year, it’s supersized. Over 1,765m2 and located within the leafy, tranquil setting of the capital’s most iconic park, the spectacular rink is laced with thousands of twinkling fairy lights. Providing festive fun for families, friends, couples and colleagues, the ice skating sessions take place on the hour, every hour and last approximately 50 minutes.