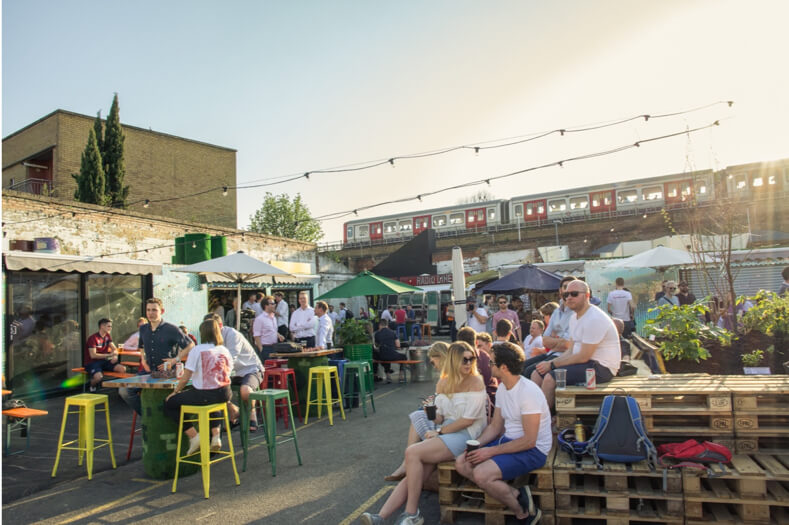 The Lowdown: Tucked in beside the fresh produce and lively atmosphere of Shepherd’s Bush Market, Old Laundry Yard will be hosting Wimbledon viewings in its open-air alfresco space throughout the Championships. For a break from the customary strawberries and cream, choose from a stellar line-up of street food traders including Venezuelan Papelon, Indonesian BBQ specialists Warung Jawa, Jollof Mama serving traditional West African delights, Maxine Cooks with all-natural vegetarian options and popular grilled cheese sandwich and skin on fries trader, Pommes Fries.

Gimme More: Old Laundry Yard are flogging Pimm’s and an exclusive Wimbledon themed Mojito for a fiver a pop. One of the best places to watch Wimbledon outside in London this summer.

2. For Pimm’s: The Refinery Bankside 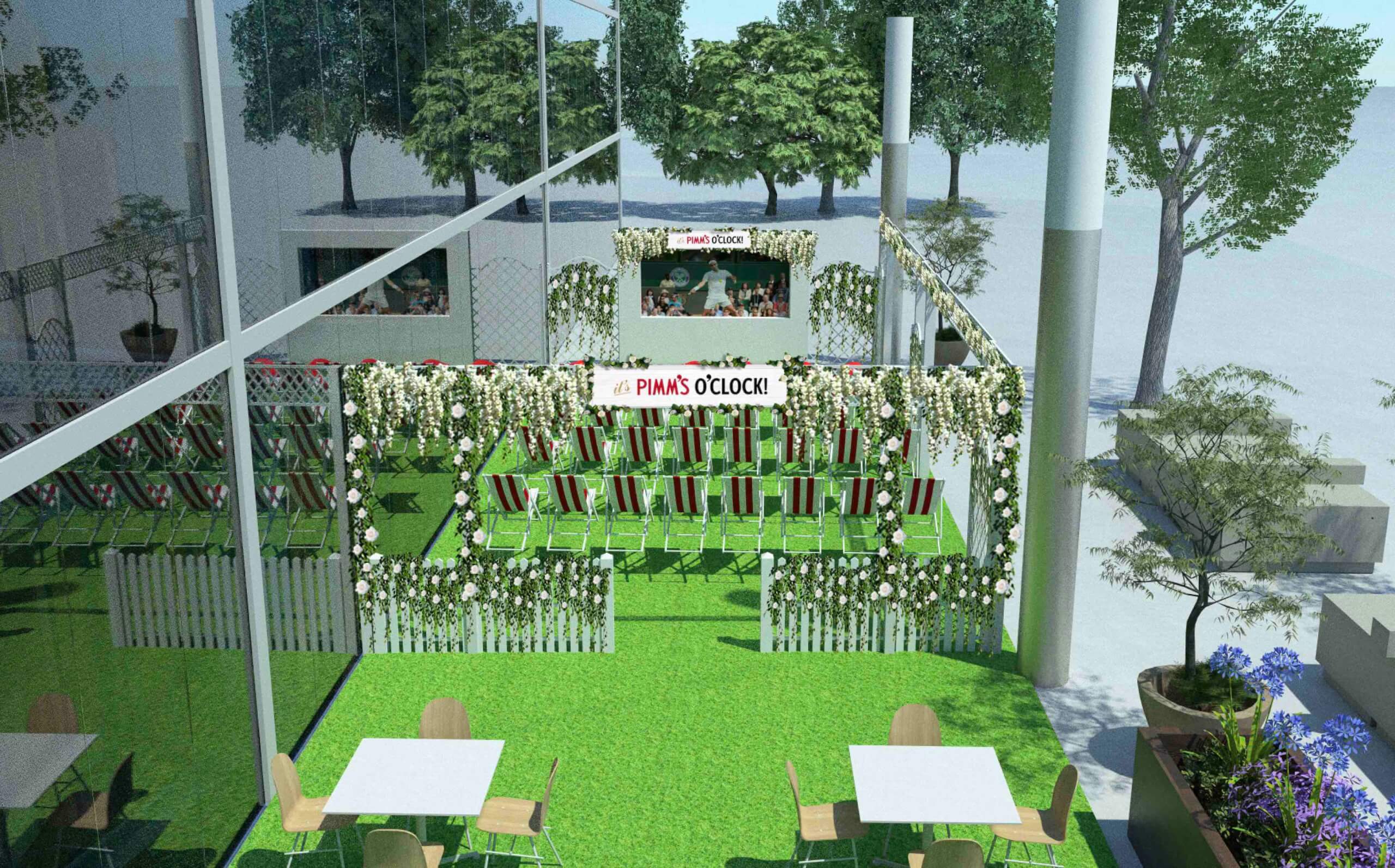 The Lowdown: Head to The Refinery Bankside and pull up a deck chair on its British inspired Pimm’s O’Clock terrace, complete with floral garlands and a large screen broadcasting all the action from Wimbledon. Take your pick from the refreshing dedicated Pimm’s menu, featuring innovative twists on the classic summertime cocktail.

Gimme More: Take a break from the punnet of strawberries and feast on the garden platter featuring halloumi popcorn, flatbread, hummus, baba ghanoush, harissa, padron peppers, onion rings and chips. Or the chorizo Scotch egg with smoked paprika mayonnaise. Who doesn’t love a massive Scotch egg? One of the top places to watch Wimbledon outside in London if you fancy a nibble.

3. For Picnics and Pimm’s: King’s Cross 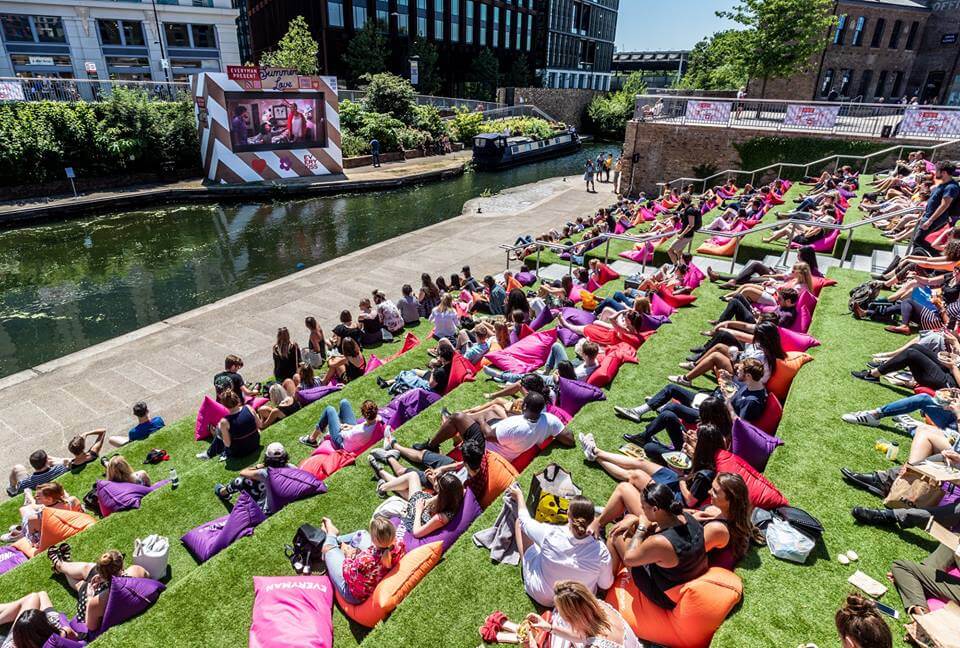 The Lowdown: Stuck wondering where to watch Wimbledon in London outside? Dubbed one of the biggest and best-quality screens in central London, King’s Cross are showing all the action from Wimbledon throughout the tournament, until the men’s final on Sunday 12th July. There are plenty of spots for a picnic, both on the square and steps themselves, or head to one of the many restaurants and bars (take our word for it: go to Caravan for their baked eggs) in the area.

Gimme More: KERB will be on hand with delicious street food for weekday lunches. And if you want to indulge in the spirit of summer, Pimms, Prosecco, cold beers and soft drinks will be on offer all week from the Summer Love bar. 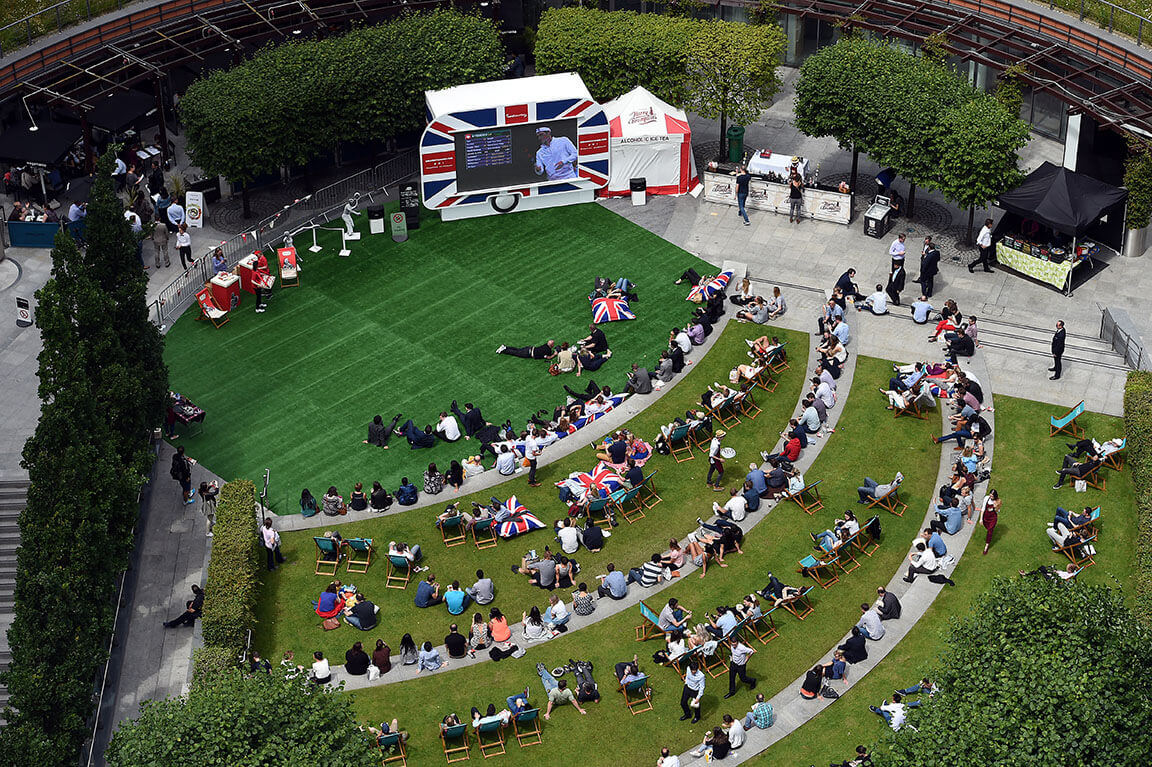 The Lowdown: There’s no need to miss a single match this summer with the return of free Wimbledon screenings on the Cardinal Place Roof Garden. Bask in the sunshine on traditional deck chairs and large Union Jack cushions, glass of Pimm’s in hand, as you watch Federer and co battle it out on Centre Court via their giant alfresco screen.

Gimme More: To make sure you don’t go hungry, Balans Soho Society have brought a pop-up to the roof ahead of their arrival later this summer, serving up selections from their award-winning menu. Complete with Pimm’s and frozen margaritas, members of staff on hand to offer deck chair service all day, every day.

5. For Outdoor and Indoor Screenings: The Rose and Crown

The Lowdown: Step court-side, past the white picket fences into the inviting pop-up marquee, complete with outdoor deckchairs and Astroturf to soak up the sun, and take in all the action on the big screen at Wimbledon favourite, The Rose and Crown.

Gimme More: If the heavens should open, retreat inside to the memorabilia-clad interior with oversized tennis balls and rackets adorning the walls, to enjoy a summer cup whilst watching the tennis.

6. For All the Action: Merchant Square 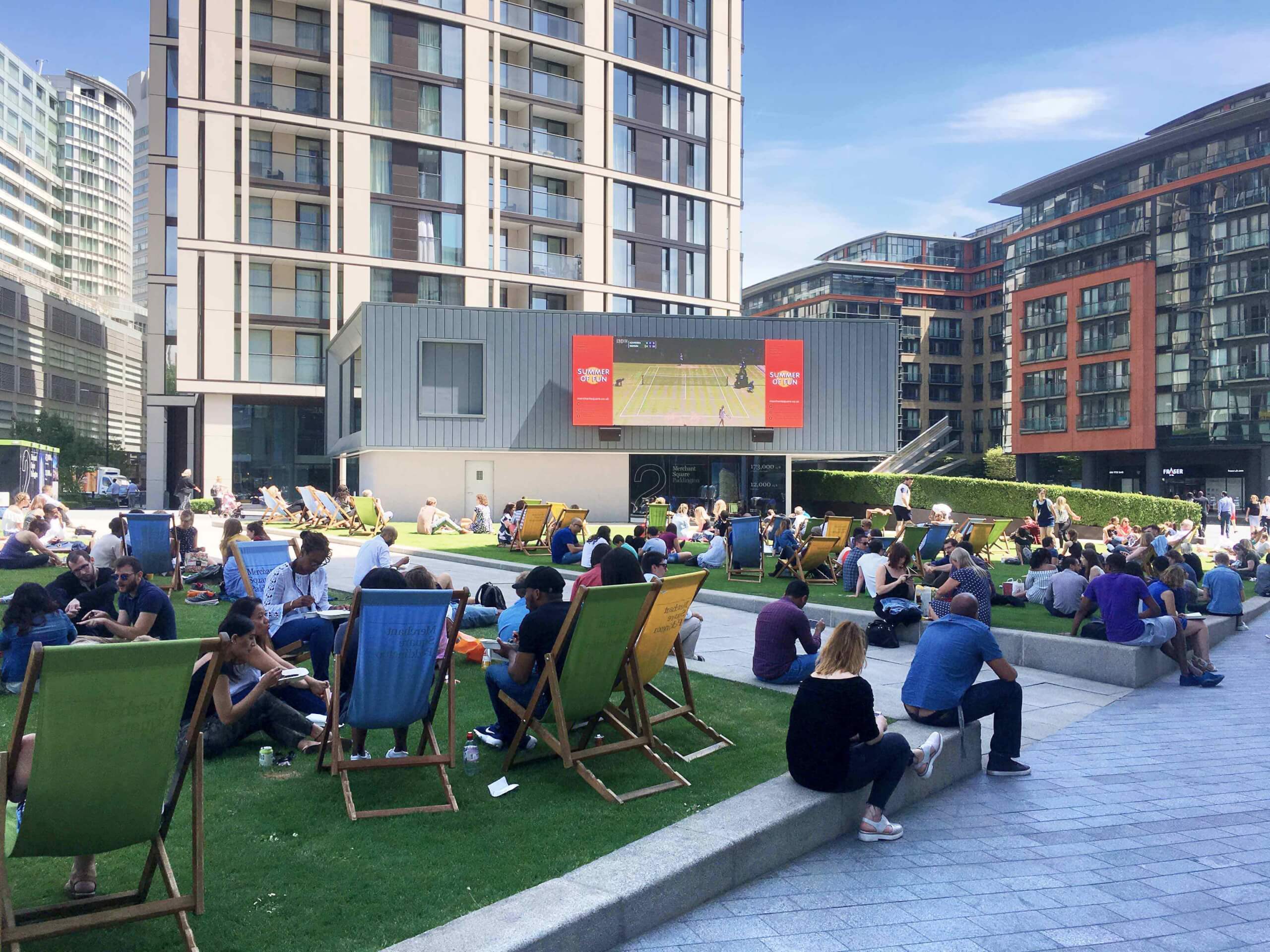 The Lowdown: Merchant Square at Paddington Basin will be live-streaming matches on the big outdoor screen on the lawn. Merchant Square will provide deck chairs and blankets to anyone watching the game, and if you’re feeling peckish there’s oodles of foodie choice. Swing by Lockhouse, an all-day eatery dishing up burgers, beers and salads,  KuPP for all your Scandi fare, and Heist Bank for pizza and prosecco,

Gimme More: From 10am-8pm every Tuesday and Thursday, pop-up street food market will be dishing up global fare. Wondering where to watch Wimbledon in London outside? Put this spot top of your list.

Where: The Lawn in front of the Merchant Square Pavilion, Paddington Basin, W2 1JS

7. For American Chic: Hamptons at Broadgate 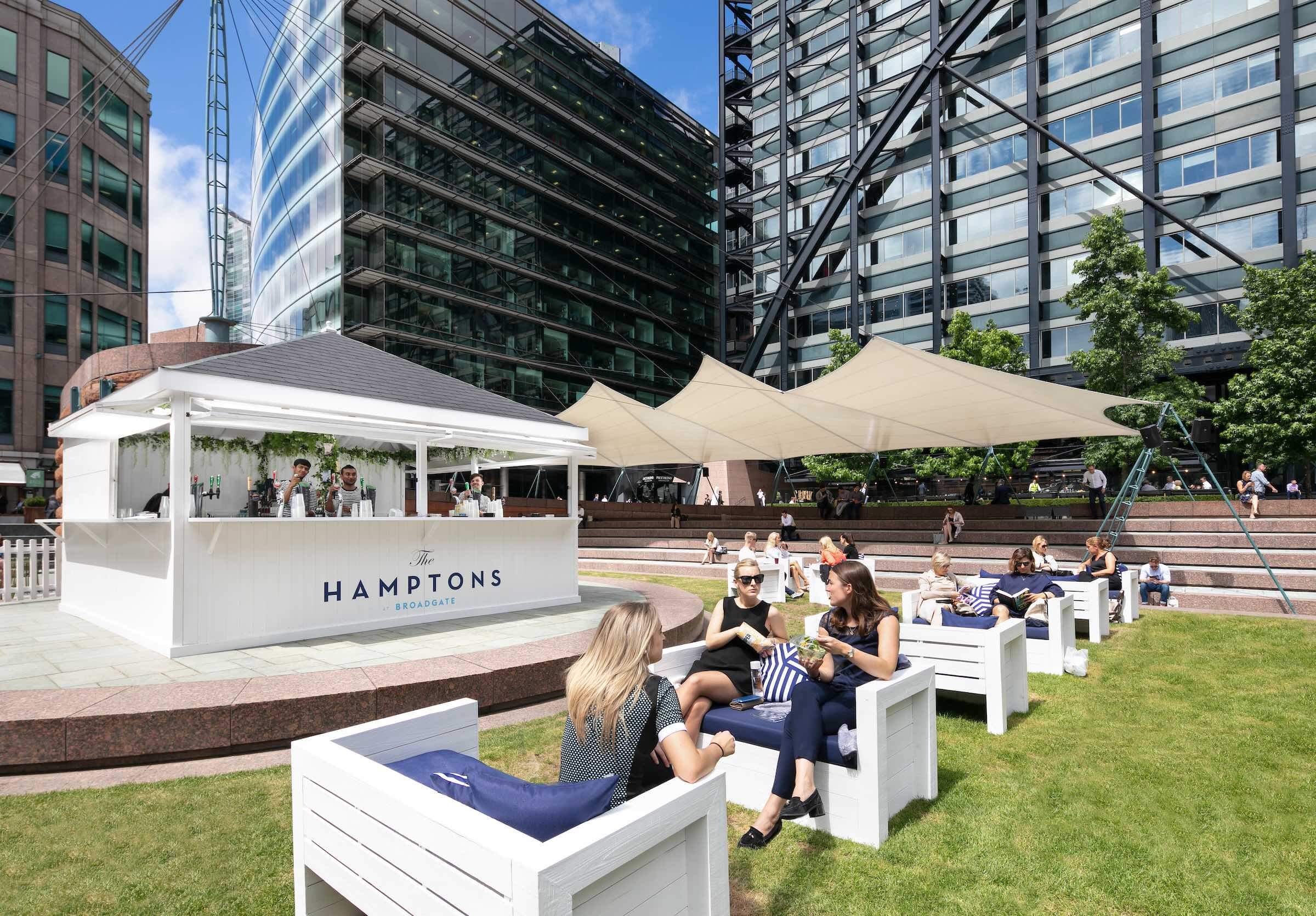 The Lowdown: Enjoy a slice of American chic this summer as The Hamptons pop-up bar has arrived in Broadgate and Regent’s Place. The perfect spots to unwind and catch up with friends whilst watching Wimbledon on the large outdoor screens.

Gimme More: Channeling the sophisticated, world renowned holiday hotspot, the bars serve a selection of cocktails, wines, beers and spirits, and there’s plenty of deck chairs for outdoor lounging too. 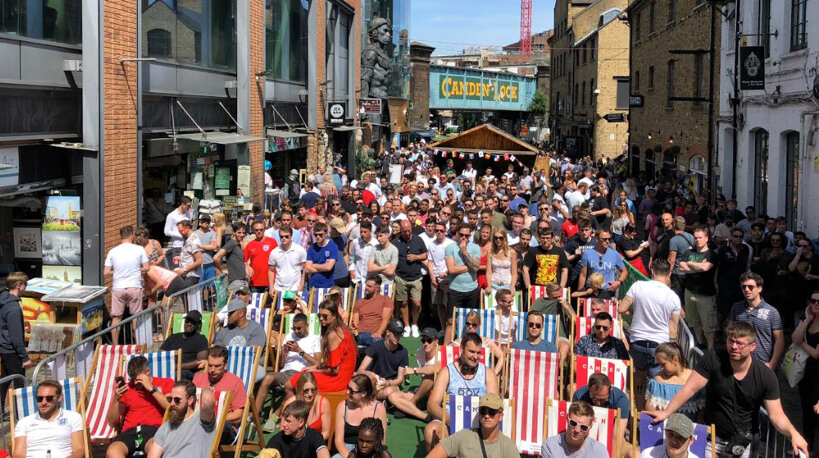 The Lowdown: Camden Market‘s outdoor screen, complete with deck chairs, bar and global street food offering is the perfect sun trap to enjoy the game in the sunshine. Cool down with summery cocktails, and ice cream from frozen mavericks, Chin Chin Labs.

​Gimme More: If you’re after some tennis munch, London’s only vegan pie and mash shop, Young Vegans, located next to the screen, are offering a ‘pie to deck chair’ delivery service during the matches. 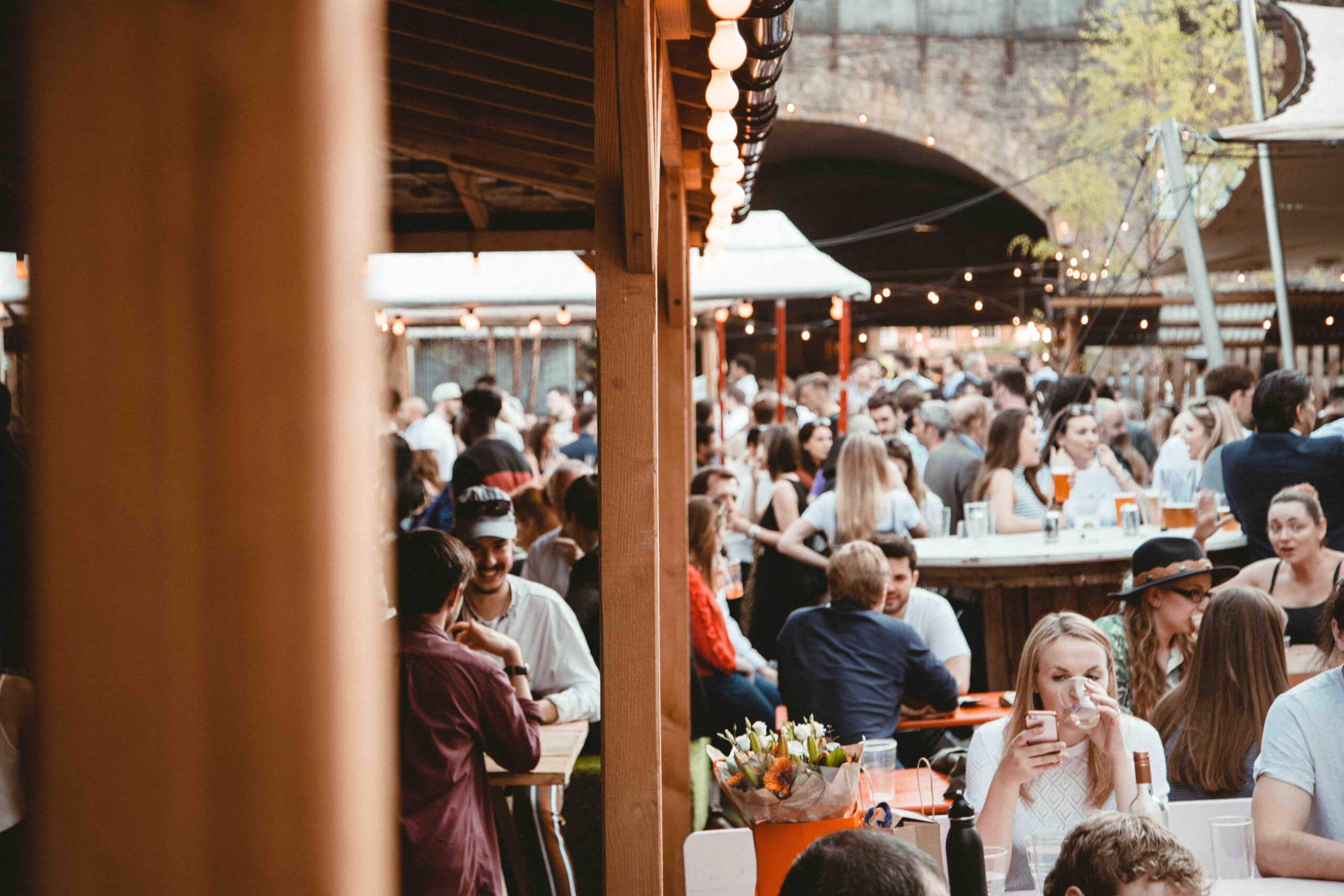 The Lowdown: A massive outdoor screen in the garden alongside the 100 inch HD tv indoors, Flat Iron Square is thee place to go for Wimbledon screenings this summer. Drinks are plentiful, and Flat Iron Square have added guest beer taps in the Flat Iron Garden, as well as a new wine-on-tap bar.

Gimme More: The screen is flanked by some of the hottest street food traders in the capital including fried chicken kings Mother Clucker, pizza by Baz and Fred and pad Thai by Ekachai. 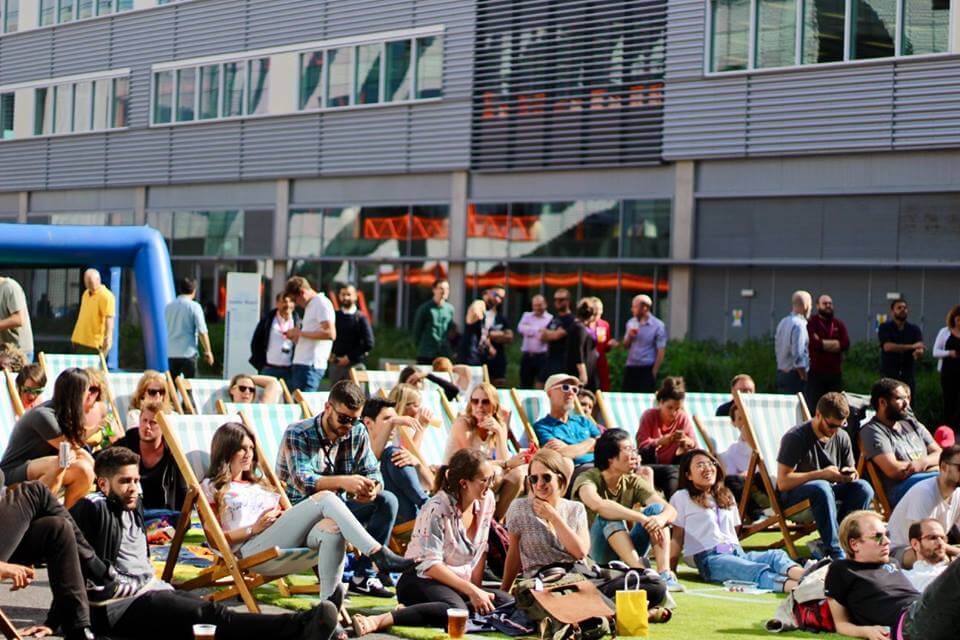 The Lowdown: It all happens down by the River Lea, just ask Adele. Hackney Wick’s foodie quarter, Canalside will be showing the matches on a big screen with a more deckchairs than you can shack a stick at. Don’t sit empty handed though as there are some top treats to keep your tum full.

Gimme More: Grab a plateful of chicken wings from Randy’s Wing Bar, and bask in the London sunshine with a ton of white poultry. Ideal. 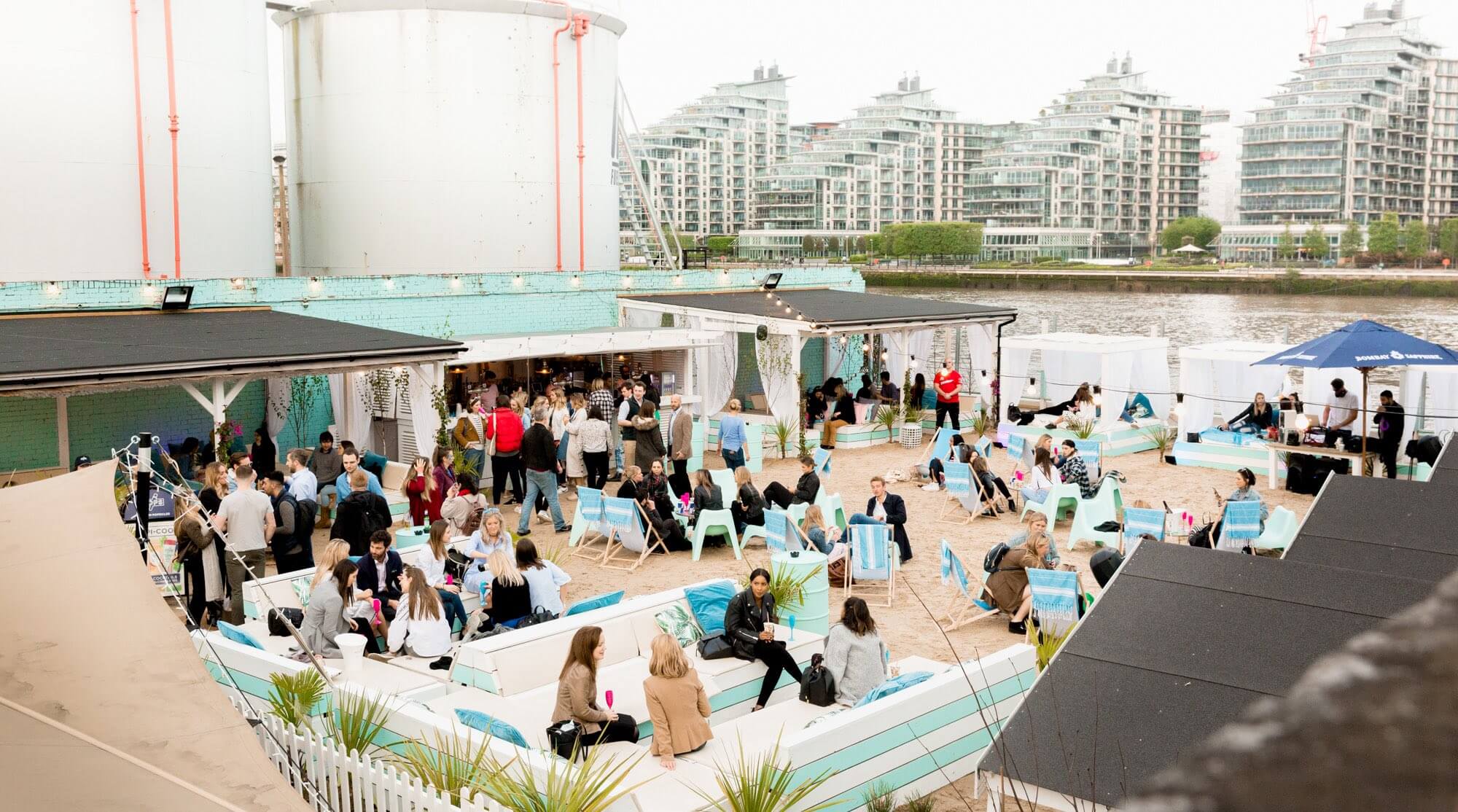 The Lowdown: With free entry for anyone in a tennis kit (must be all white), the big screening of Wimbledon’s Finals are not to be missed. You can pre-order a picnic hamper for up to four people and a beach BBQ, or you can kick back with the well-loved Wimbledon combo: Pimm’s and strawberries and cream.

Gimme More: There’s a free glass of Pimm’s if you arrive before 2pm. If that isn’t a reason to watch Wimbledon outside in London this summer, we don’t know what is.