Top 7: Sporting Events to Look Forward to in 2016By Angelica Malin

As well as being hugely entertaining and offering great opportunities for shared interests and socialising, sporting events bring a special element to team-building as creating team-time with a trip to a sporting event can offer a ringside perspective on the importance of team ethics as well as being an apt reward for a work- based team performance.

Michael Jordan once eloquently attested: “talent wins games but teamwork and intelligence wins championships” and where better to reinforce this to your own talented team, than through being part of a major sporting event? Even with the Rio Olympics later in the year, there are still plenty of major sporting extravaganzas to choose from in the UK in 2016 and with top events companies such as Team Tactics realising the valuable role that sporting events have to offer in supporting work-based team performance, it’s possible to combine a trip with some well-earned team-time and even training to help keep your team in shape and ahead of your own competition! 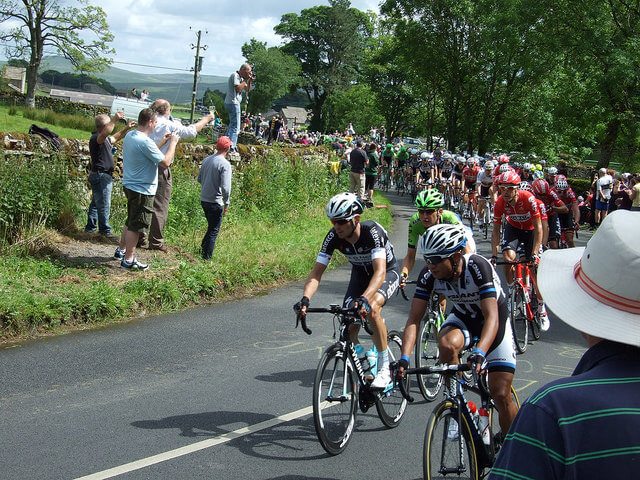 Saracens vs Harlequins at Wembley Stadium – when two spectacular rugby squads meet at one of the world’s best known sporting venues, it’s already a team event that everyone will want to be involved with. The match on Saturday 16th April 2016 offers the prospect not only of sporting entertainment, but also of the ultimate corporate team-building day.

Tour de Yorkshire – although at first glance, cycling may seem in itself to be a lonely sport, yet the increasing popularity of group riding, the exemplary team effort that goes into each professional cyclists’ success and the pure spectatorship of the sport which (in the scenic dales of Yorkshire) draws some of the largest crowds, now means that cycling is firmly on the team-time calendar. Whether it’s to volunteer a team for stewarding and refreshment support or to make a day of cheering on the racers and taking in some of the fabulous Yorkshire backdrop to the race route, being part of Tour de Yorkshire from April 29th to May 31st, is a great way to get back up to speed with your team.

FA Cup Finals at Wembley Stadium – May 2016 offers great opportunities for team development with the internationally recognised FA cup finals. The Women’s FA Cup final is on Saturday 14th May 2016, followed by the male FA Cup Final on Saturday 21st May. Taking care of tickets and transport for your work team or organising an event expert to take care of the details so that you can relax with the team and enjoy the match is a winning idea.

Wimbledon – from 27th June until the 10th July, team days of tea and tennis at Wimbledon could offer the ultimate outing for rewarding a team and instilling motivation. If your company regularly offers squash or tennis as a way of improving team fitness and ability to work together, then enriching this with a trip to Wimbledon can be a good way to acknowledge your role in promoting well-being, as well as recognising and rewarding hard-working ethics.

Henley Regatta – from the 29th June to the 3rd July the historic Henley Regatta offers the ideal chance to take team-building outside. Whether your team have already enjoyed some water sports team building activities or you’re all just keen for a day out of the office, making an event of your team’s recent progress by laying on a picnic or waterside activity alongside the Henley Regatta is a way to build memories as well as teams.

Ealing Half Marathon – now five years young, 2016’s race will be held on Sunday 25th September 2016 at 10.00. Supporting charitable events such as half marathons can be a great way of bolstering team dynamics, through offering a corporate team of volunteer stewards for the event, entering a team into the race or by organising it as a day out for the work team, to add to the local community spirit and to build some of your teams’ own. If fundraising for charities through running and supporting your employees’ health with group training is something your company have thought about but not yet taken action with, why not organise a day out to this year’s half marathon as a fact finding mission for the main plan of running a team next year?

Attending sporting events as a way of rewarding staff, promoting team ethics and acknowledging the importance of balance with the social and health side of working relationships could be a game changer for your company’s productivity and business development, so why not spring into action and consider your sporting options for 2016?