1. For a Trip Stateside: Backyard Cinema 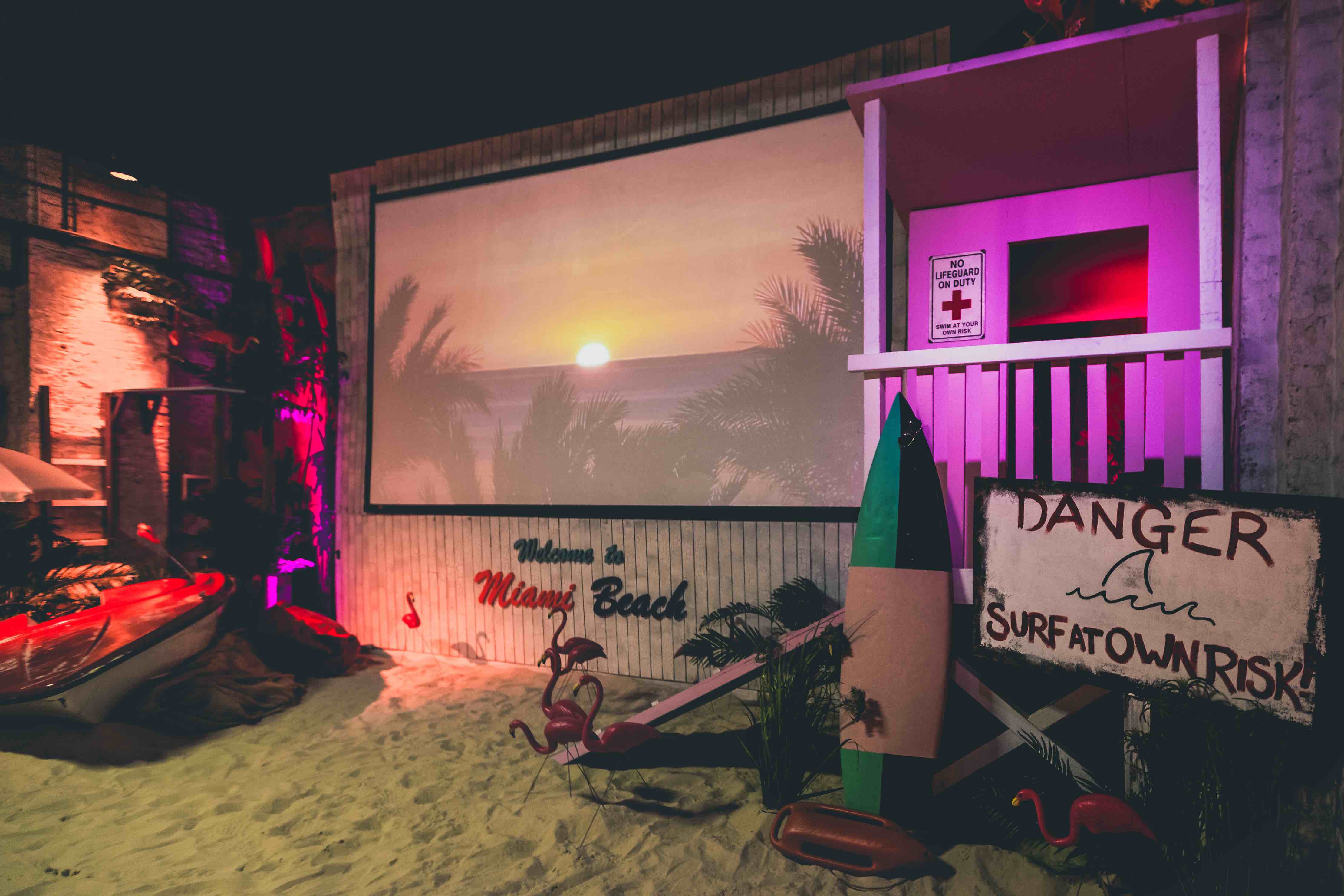 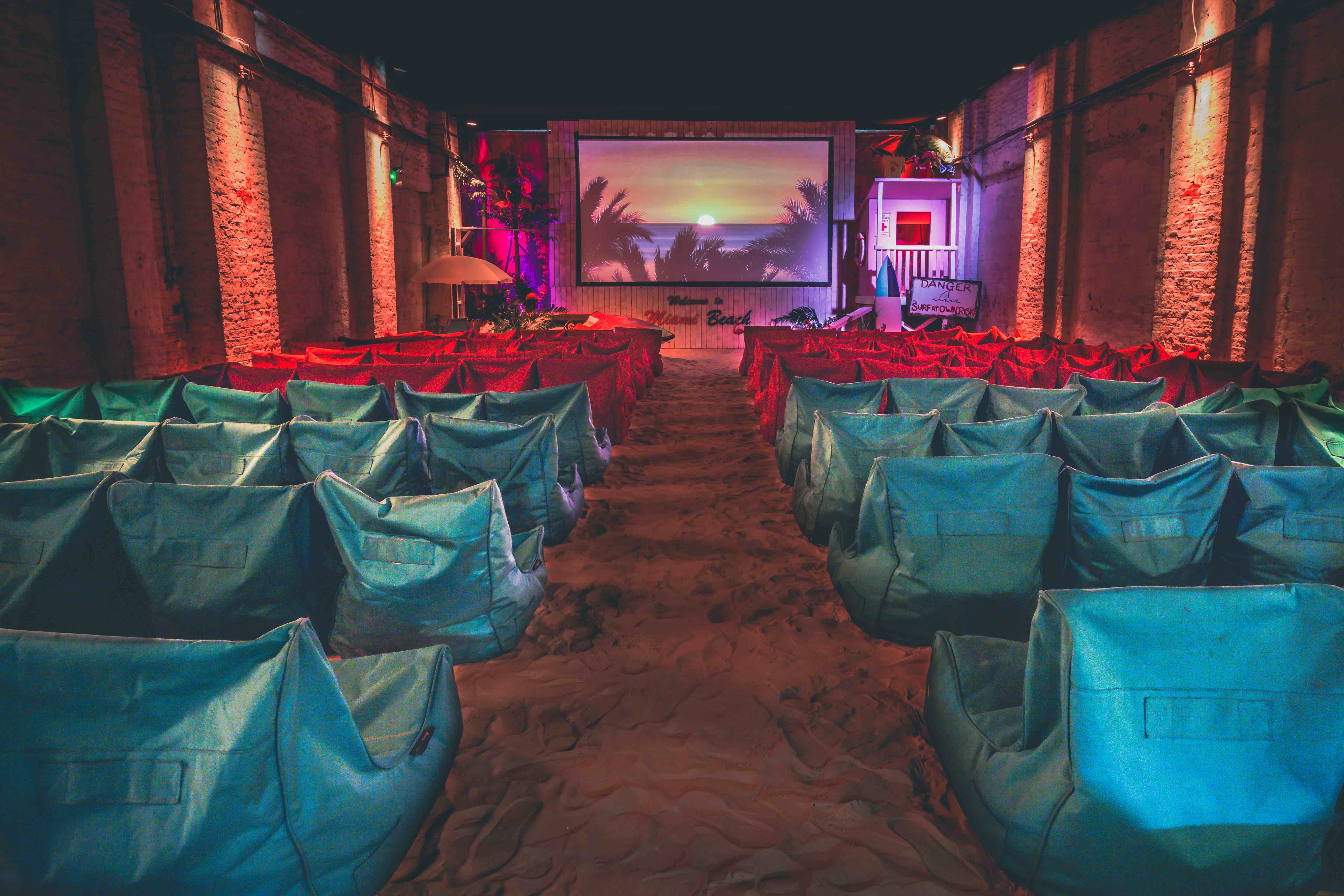 What: Miami Beach is the latest instalment from Backyard Cinema, the gang behind The Last Chapel, The Winter Night Garden and The Lost World. Not just your average cinema, Backyard Cinema has brought the Miami heat to Borough with a tropical beach and exotic cocktails to accompany screenings of classic films and blockbusters. Ticket holders will exchange city footwear for flip-flops at the door, and gaudy Hawaiian print shirts are encouraged.

The 411: Backyard will show a selection of films celebrating sun, sand and all things tropical. One of our favourite cinema experiences in London, films include 21 Jump Street, School of Rock, Moana, True Romance and La La Land. Backyard Cinema’s sand-filled, Miami experience hosts giant beanbag seating and an in-house bar serving a selection of themed cocktails alongside craft beers, cider, prosecco and mocktails. The only umbrella in sight will be the one in your cocktail. 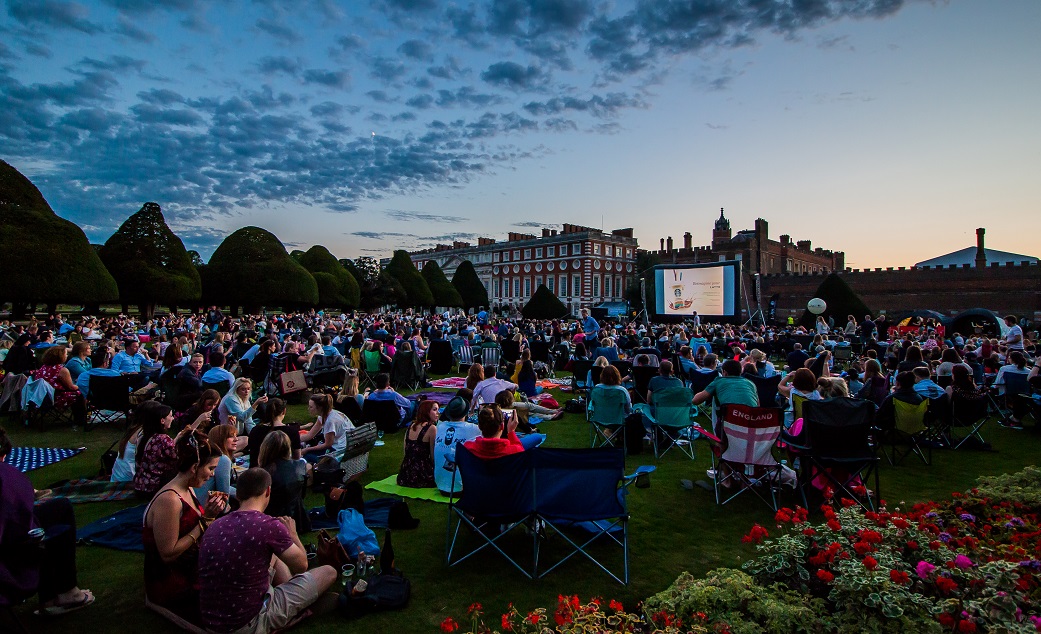 What: The Luna Cinema is back for its biggest season ever of cinema under the stars at the UK’s finest venues including for the first time ever, screenings at Westminster Abbey and Chatsworth House. From Royal Palaces to London Parks, via botanic gardens, castles and racecourses, the season has something for everyone.

The 411: Highlights include screenings of Cocktail at One New Change, overlooking St. Paul’s Cathedral in the heart of The City, Breakfast at Tiffany’s at Kenwood House, Hacksaw Ridge at the National Memorial Arboretum, Ghostbusters at Kew Gardens, The Goonies at Kensington Palace, Top Gun at Blenheim Palace, and Groundhog Day at Greenwich Park. As always, The Luna Cinema audiences are welcome to bring along picnics and drinks to screenings. However, all events will also have fantastic hot food for sale and a full bar on site, in partnership with headline bar sponsors, Estrella Damm.

3. For a Summer Series: Somerset House 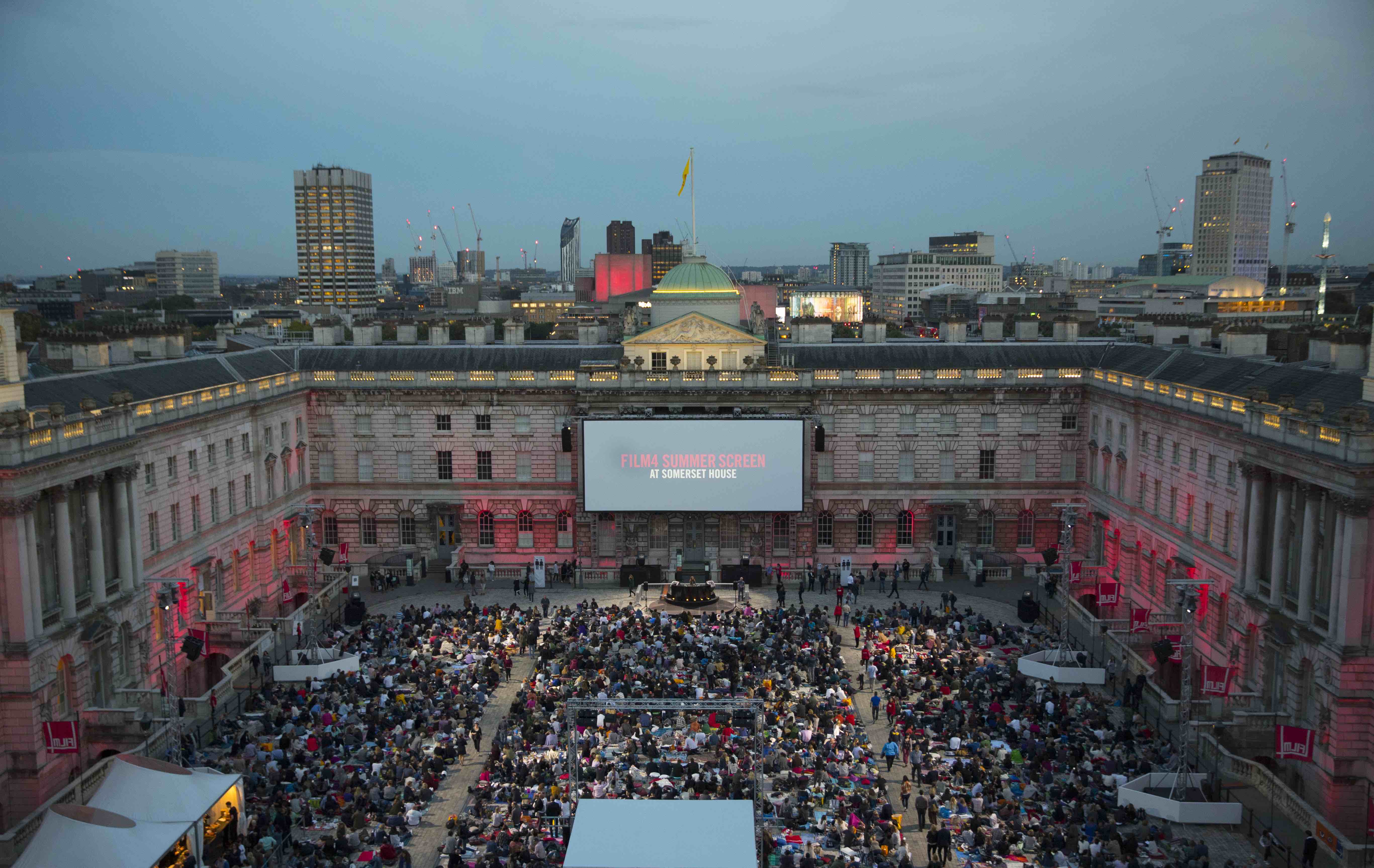 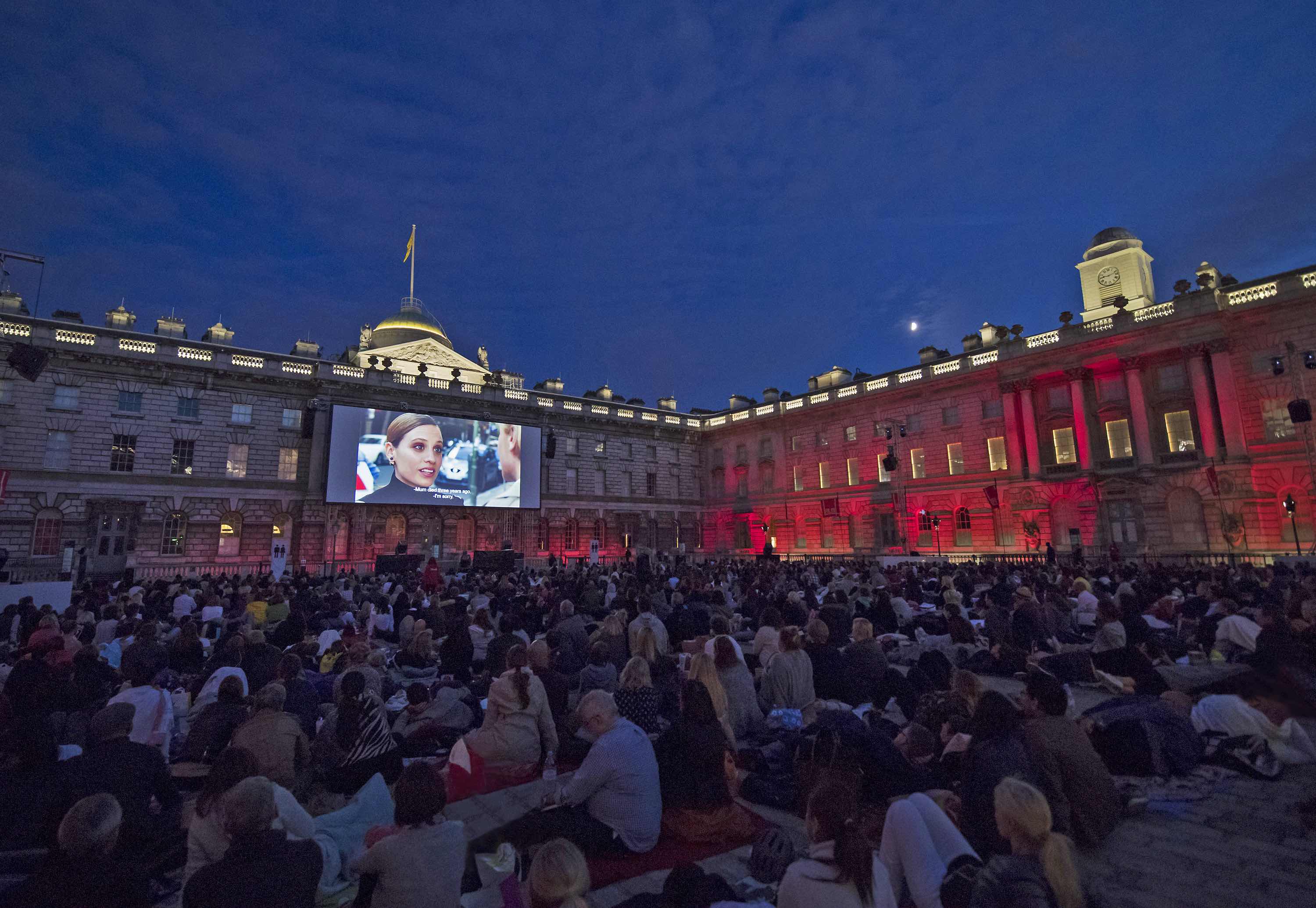 What: Film4 Summer Screen at Somerset House brings the best of cinema to one of the most spectacular settings in London. The annual festival presents a two-week programme – handpicked by Film4 and Somerset House – of contemporary, cult and classic films, plus premieres of forthcoming releases from around the world. One of our favourite cinema experiences in London, for sure.

The 411: The 2017 festival will open with An Inconvenient Sequel: Truth to Power (10th August), the stirring sequel to the Oscar-winning 2006 documentary An Inconvenient Truth, which follows the former Vice President Al Gore as he continues his fight against climate change. And Al Gore will be on-stage after for a special Q&A interview. Winner of the prestigious Palme d’Or award at this year’s Cannes film festival, The Square (16th Aug) takes the centrepiece premiere of Film4 Summer Screen at Somerset House. And finally, direct from Sundance and Cannes film festivals, the festival will close with Patti Cake$ – a bold, funny and infectiously upbeat coming-of-age crowd-pleaser from director Geremy Jasper (23rd Aug). 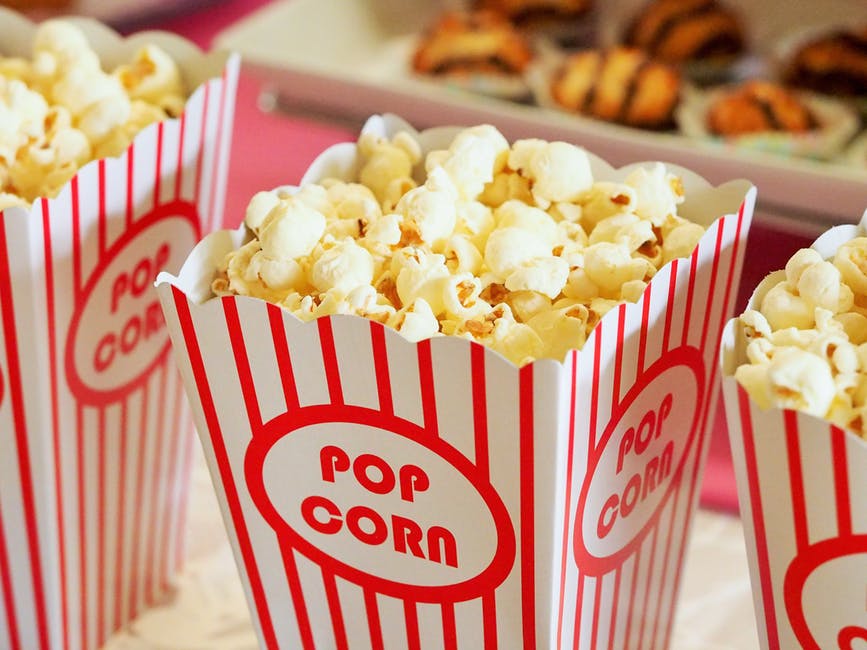 4. For an Outdoor Cinema: Pitch Stratford 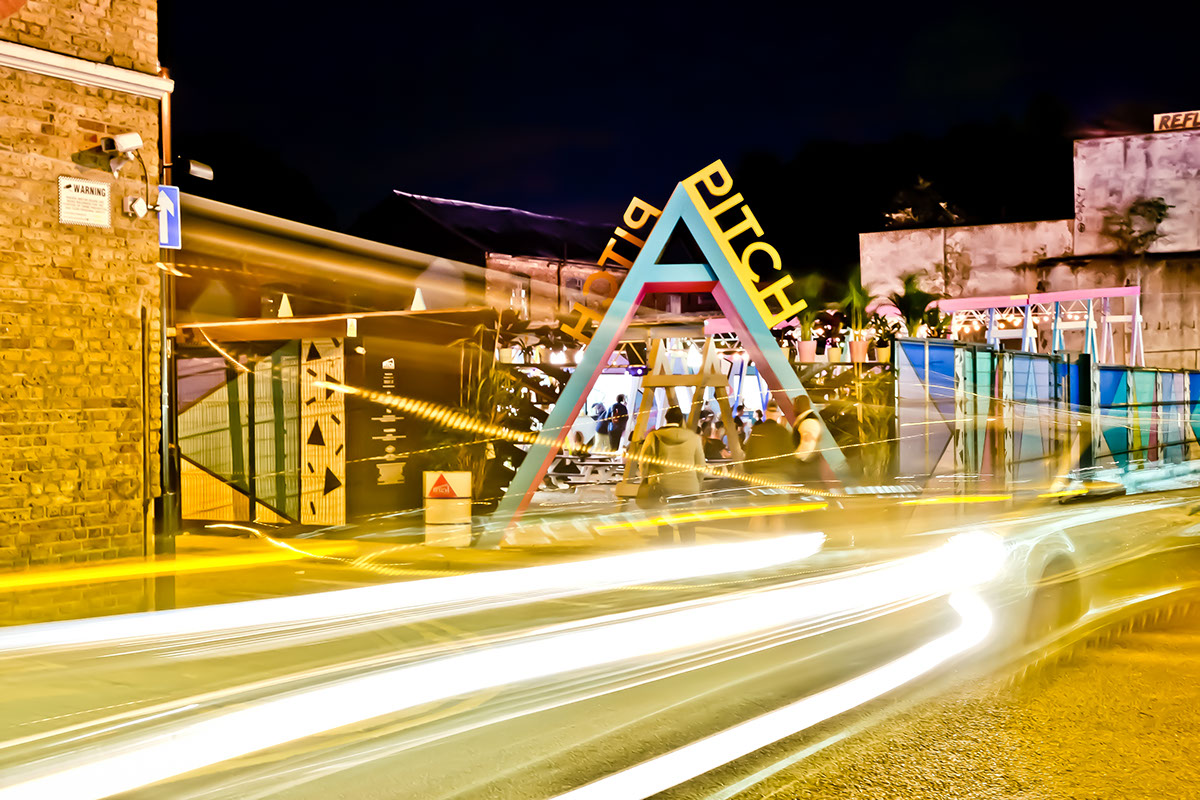 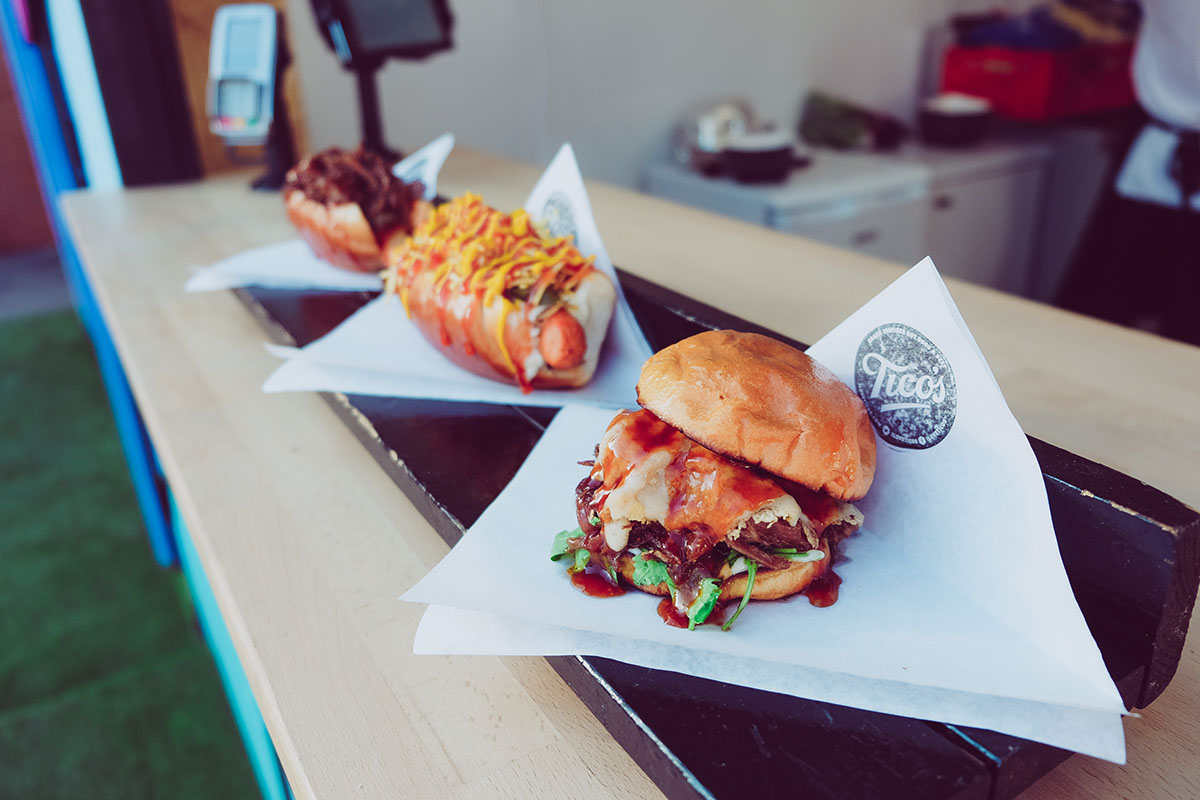 What: PITCH Stratford is London’s newest outdoor drinking spot and open-air cinema, and one of the best new cinema experiences in London. Throughout the summer Pitch will be playing feel-good movies in their cinema space; from Tom Hanks’ awesome BIG, to Coming to America, The Truman Show and Terminator 2.

The 411: Pitch Cinema opens on Mondays evenings and shows a variety of 80s and 90s classic films. Sit on cosy bean bags, listen through the latest wireless headphones and enjoy a nice glass of chilled vino. Hungry? There’s plenty of street food from vendors including The Gyoza Guys, Kalimera, Tico’s and The Piadina Project. 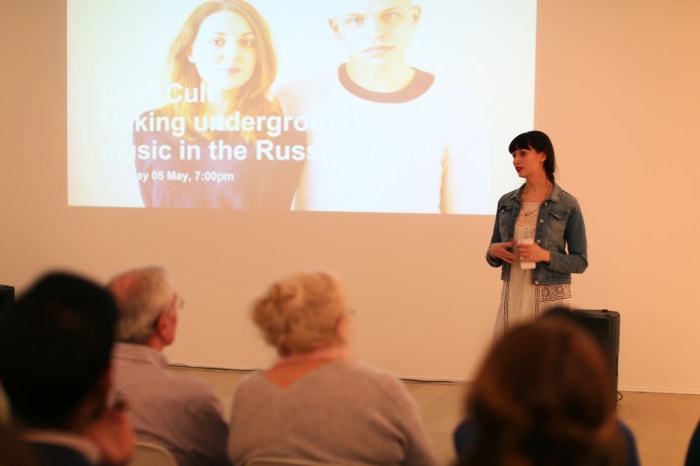 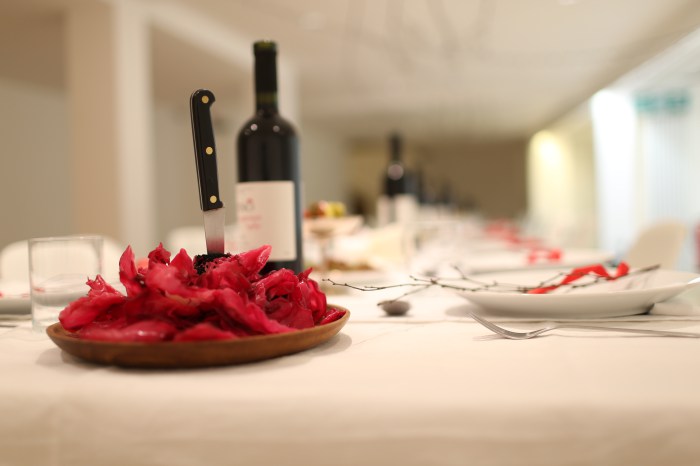 What: Calvert 22 Foundation host a number of cinematic events in their Shoreditch space, including those in partnership with KinoVino. KinoVino is a cinema supper club created by Alissa Timoshkina that brings together some of the best chefs and films from around the world. Each edition offers film screenings and sit-down dinners with unique menus inspired by the films, creating an immersive experience that is shared between an intimate group of guests.

The 411: On 30th August, KinoVino invites everyone to explore a beautiful regional cuisine prepared by one of the most vibrant chefs cooking today, Olia Hercules. Before sitting down to Olia’s feast (menu to be announced soon), KinoVino will treat you to Georgian wines and a screening of director Sergei Parajanov’s ‘cinematic Holy Grail’ The Color of Pomegranates, a film hailed by the Guardian as a poetic masterpiece.

What: Londinium is a three-month season of events celebrating London’s Roman history. From the 7th – 15th August, London’s Guildhall Yard is embracing the epic with a series of Roman-inspired films. One of our top new cinema experiences in London, this is one for the history buffs.

The 411: Taking place on the site of London’s first entertainment arena, expect Italian street food, pop-up events and talks on selected screenings. Plus, attendees will have the opportunity to visit the remains of London’s original Roman amphitheatre which is will be open until 9pm. Screenings at this outdoor pop-up cinema include: Life of Brian, Pompeii, Roman Holiday, Jesus Christ Superstar, Carry on Cleo and Gladiator. 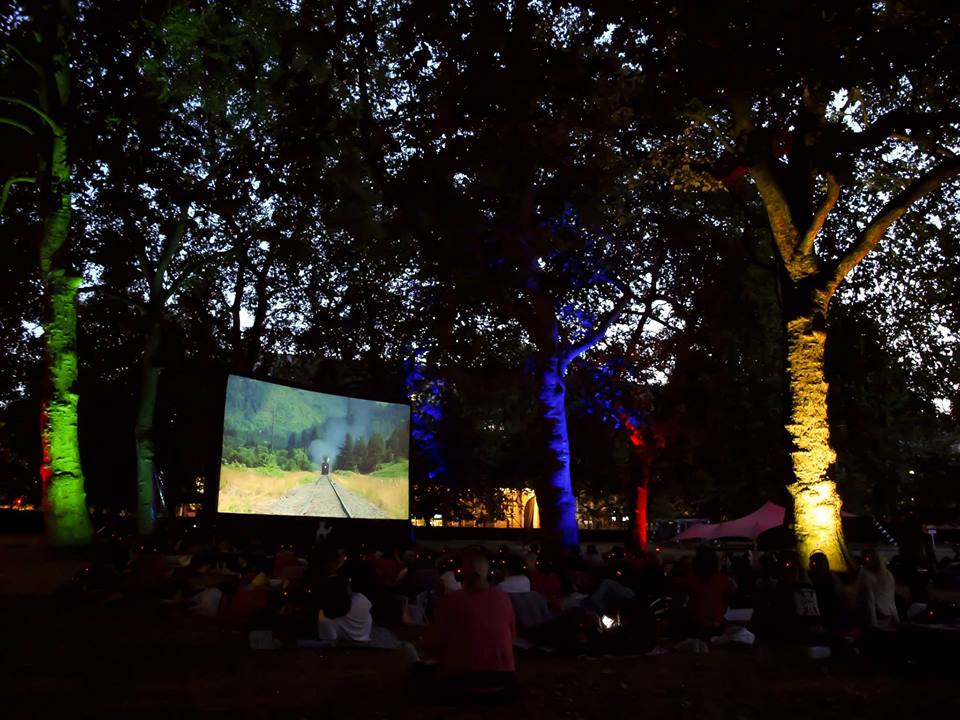 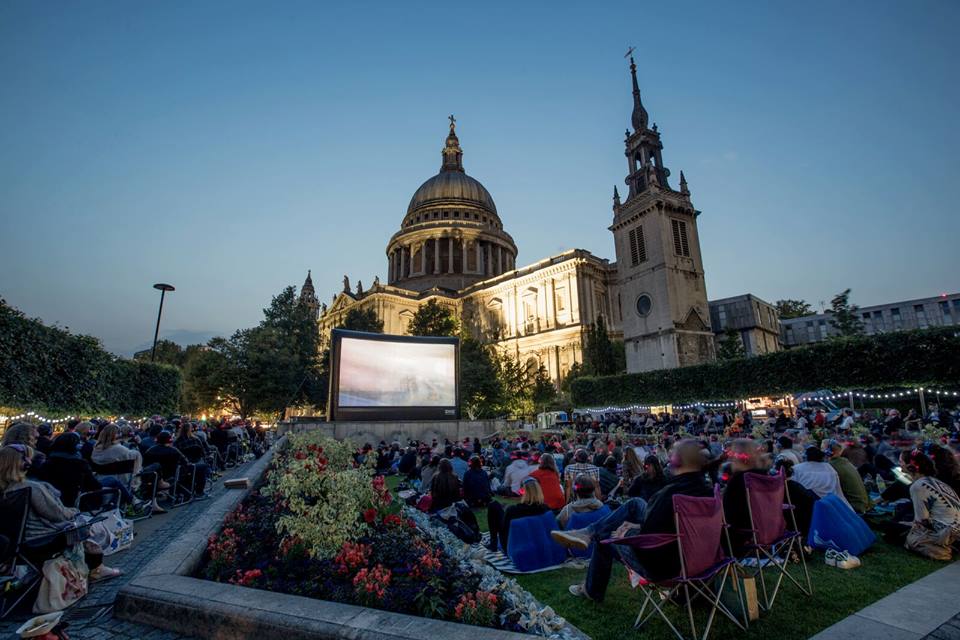 What: The Nomad Cinema is the roaming pop-up that gives back. Since 2010, The Nomad has popping up at an inspiring range of beautiful, unique and intriguing screening locations across London and beyond. Nomad’s intent is to create a ‘festival’ vibe; think quality catering, goodie bags of edible extras, a blanket, poncho, inflatable back rest and a magic carpet which won’t make your redundant sofa seem so appealing.

The 411: One of the best cinema experiences in London, Nomad Cinema is showing a range of films this summer, such as The Lion King, Aliens, La La Land, and Cinema Paradiso. Carpenter’s Road Lock in Straford has been re-opened for the first time in 40 years. The evening will host How We Used to Live on 28th August in this beautiful waterway setting, which overlooks the London Stadium and Orbit. 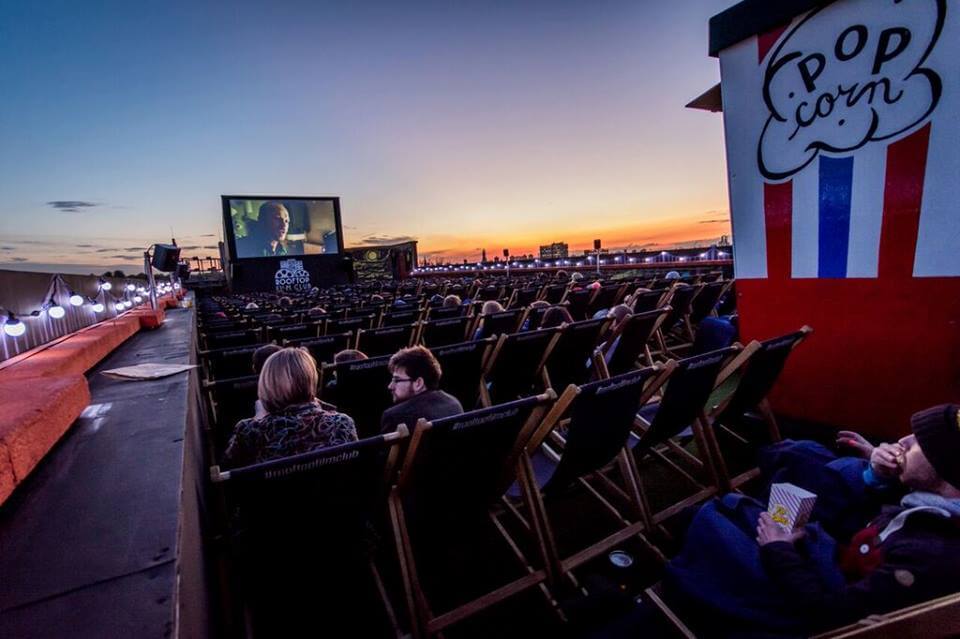 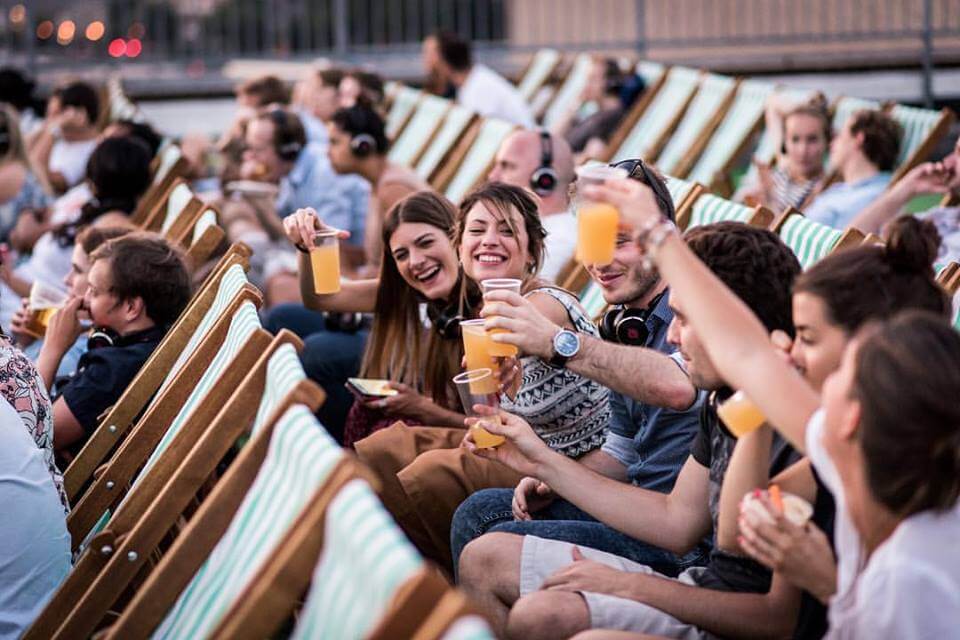 What: Book a date, or a mate, fill a popcorn box, and grab a deckchair; Rooftop Film Club has a stella line up of movies this summer. Rooftop Film Cub operate across four locations in London: Peckham, Kensington, Queen of Hoxton and Stratford. If you’re a film buff, or just enjoy a rom-com with your best ones – there’s nothing better than watching a flick under the stars.

The 411: The team use state-of-the-art wireless headphones so you can live in those memorable cinematic moments, and not get disturbed by the outside world. Now that’s cinema. And their programme is hand-picked with a personal touch, to ensure each night is an unforgettable movie experience from cult classics to brand new releases. The Rooftop crew’s summer line up includes gotta-see-again-but-this-time-at-altitude classics like epic jailbreak tearjerker The Shawshank Redemption, Oscar-winning animation Zootropolis and everybody except Warren Beatty’s film of the year Moonlight.