Remember those days when hitting the iMax was cool, or you managed to find a cinema with a sofa and a bar in it and thought you were awesome. There’s a new breed of cinema experience taking over London. It all went off last year when some bright spark decided to put a screen on a roof. It was a game changer. Rooftop Cinema had a sellout summer. Cue London’s disused spaces being transformed into all kinds of makeshift cinemas. Whether it’s from your car or your hot tub, here are five of the coolest places to catch a flick this summer.

Ah, those age old problems of people talking during the film, the rustle of sweet packets or mobile phones not on silent. Well, no more. At Drive in Cinema your car is your palace. Do as you please, within reason of course! With its huge inflatable screen, the car park at Alexandra Palace is now the home of the drive in movie. It’s the same price whether there’s one or four of you in the car. Just park up,  tune in the radio and turn up the sound as loud as you wish. Popdogs are on site serving up awesome hot dogs from their truck. Or if you’re just an old school popcorn fan, hit the hazards and one of the crew will skate over and deliver it fresh to your window. 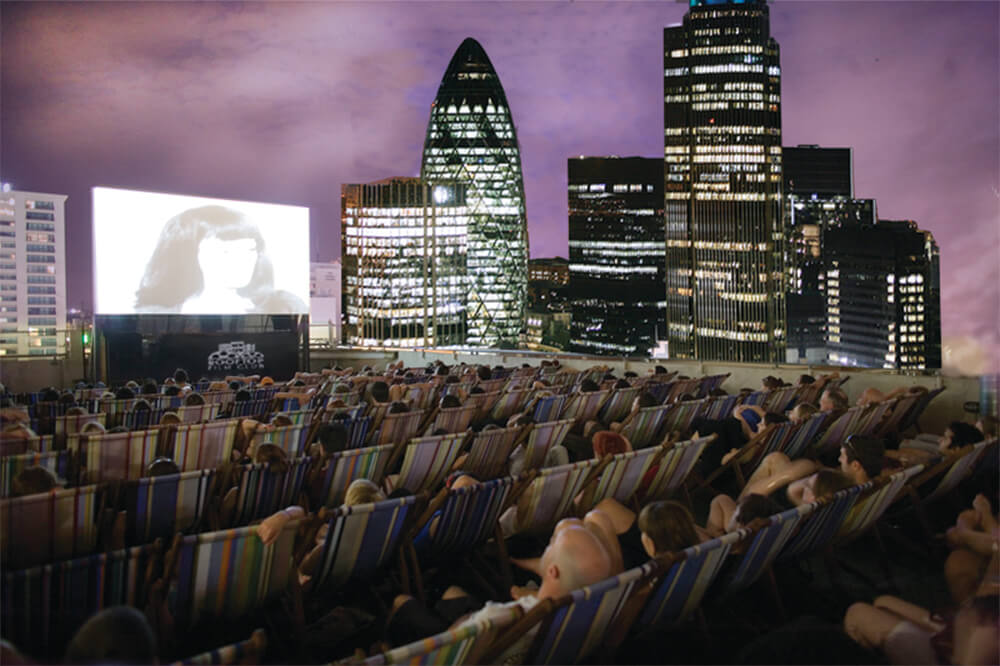 After an outstanding 2014, Rooftop Film Club is back with a bang. This year commanding no less than four rooftops across London. With venues in Shoreditch, Peckham, Stratford & Kensington you can savour the city from a whole new perspective. Arrive early and take in beautiful views of over London at sunset. With the likes of Pizza Pilgrims serving up food don’t even think about having dinner first. Then sit back in one of their cool director’s chairs, put on your wireless headphones and snuggle underneath a blanket to enjoy the film. 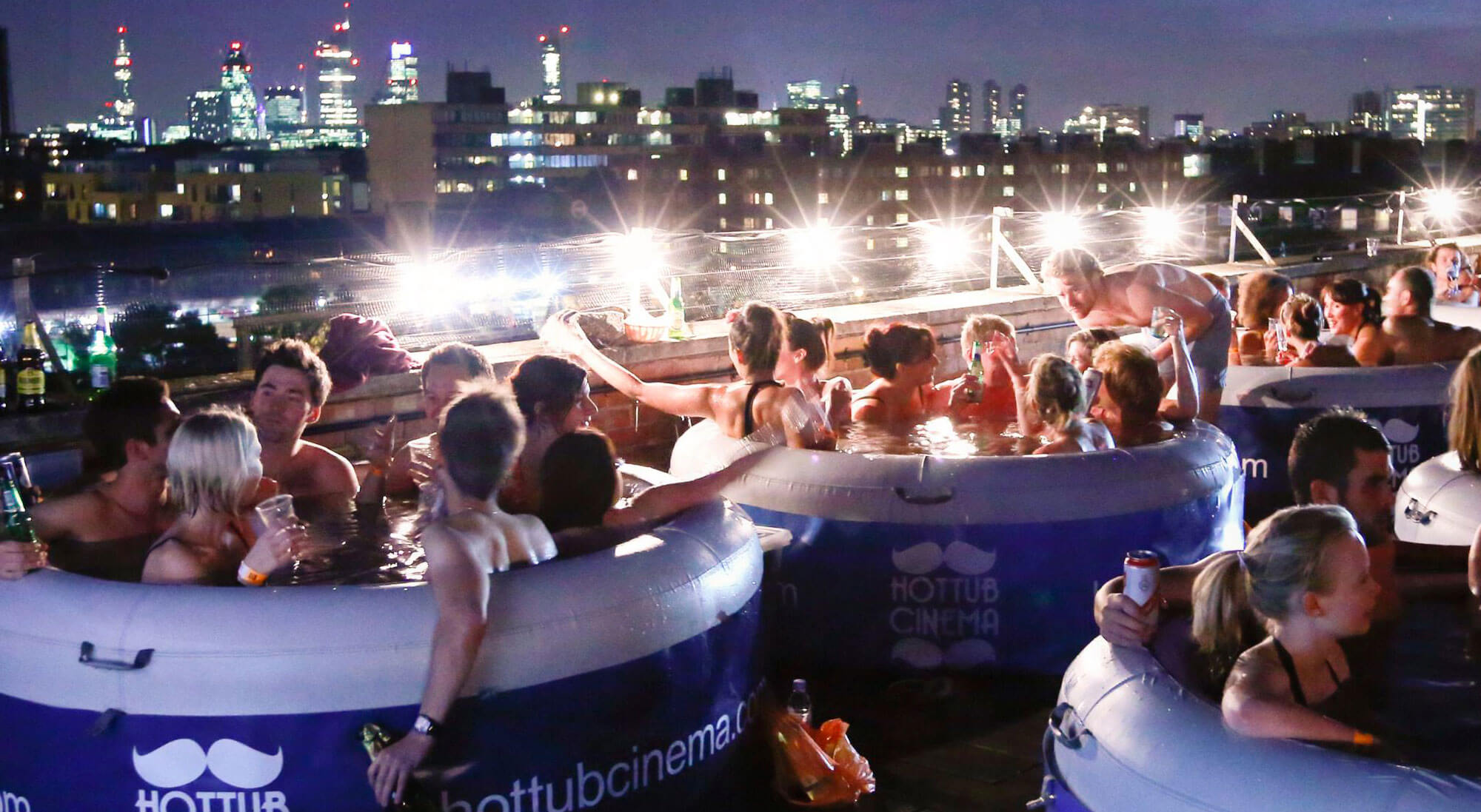 Make like a rockstar sipping Champagne in a hot tub at Hot Tub Cinema. Dust off your beach wear because anything you don’t leave in the cloakroom will get wet. Set in a disused railway station in Shoreditch, take a seat in one the multiple hot tubs and relax whilst waiters deliver you anything from Champagne to Tequila slushies. Let’s just say the films are a little easier to follow here. Oh, and the odd water-fight is known to occur! You can either book a private tub for six, or buy tickets in pairs. Let’s get this straight, this isn’t the hot tub version of first dates. Y’all know the rules… No heavy petting. 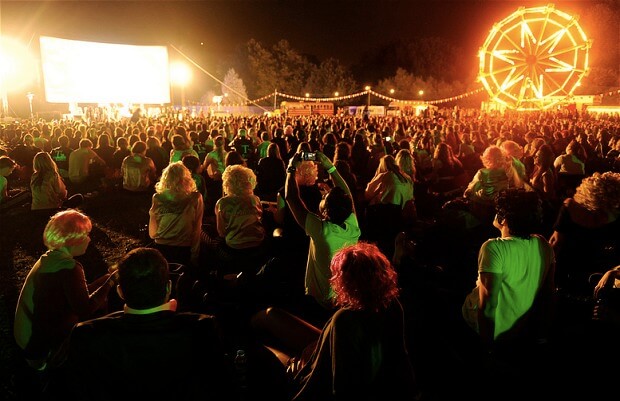 When Secret Cinema started out you wouldn’t even know what film you were going to see, you just bought tickets. Now it’s more of a question of just how much more freaking immersive can it get. We’re not talking 3D, we’re talking recreating the whole film set. One of the smash hits of last summer was their screening of Back to the Future. Secret Cinema took over the Olympic Park, rolling back the years to 1955. Where over 30 nights an estimated 75,000 turned out in 1950s attire to the fictional town of Hill Valley to see Marty Mcfly travel Back to the Future. This summer, it’s all about The Empire Strikes Back. Who knows what to expect. All i’ll say is make sure your outfit is at the ready.

5. For a Night Out: Nightspot Cinema 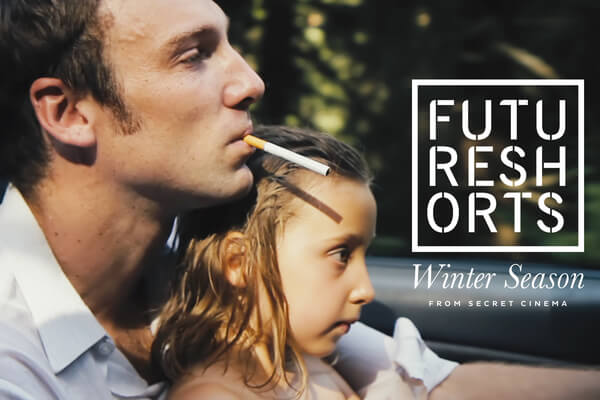 Nightspot Cinema is one to watch out for. You know how sometimes you just want a little bit more after you’ve come out of the cinema. Well, Nightspot Cinema have the perfect remedy for that. Their most recent event saw them take over the disused Foyles bookstore in Charing Cross, turning it into a #Lazertagfilmparty. What’s one of those I hear you wonder. Well, it’s simple. A screening of Tron legacy followed by a huge rave/game of lazer tag set across two floors, going on until the early hours. We’re talking lasers, strobes, rubber body suits and copious amounts of blue virtual cocktails. Really, what more do you want from a night out. Keep an eye on their website for news on their next event. 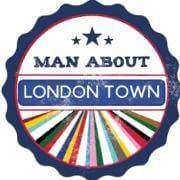 Liam is the founder of manaboutlondontown.com – a website devoted to going out affordably in London, as well as letting people know all the cool
stuff that’s going on. Follow them on Twitter @ManAboutLDNTown