Celebrating Christmas in London? Christmas is just around the corner, and since London is sure to be one of the most festive places in Britain over the next several weeks, we thought we’d take a look at the best upcoming events. For all you festive kids, we’ve included big events, Christmas markets, Christmas pop-ups, Christmas lights, Christmas carols and even some events on Christmas Day to ensure there’s some festive fun that appeals to everyone. It’s time to get festive: 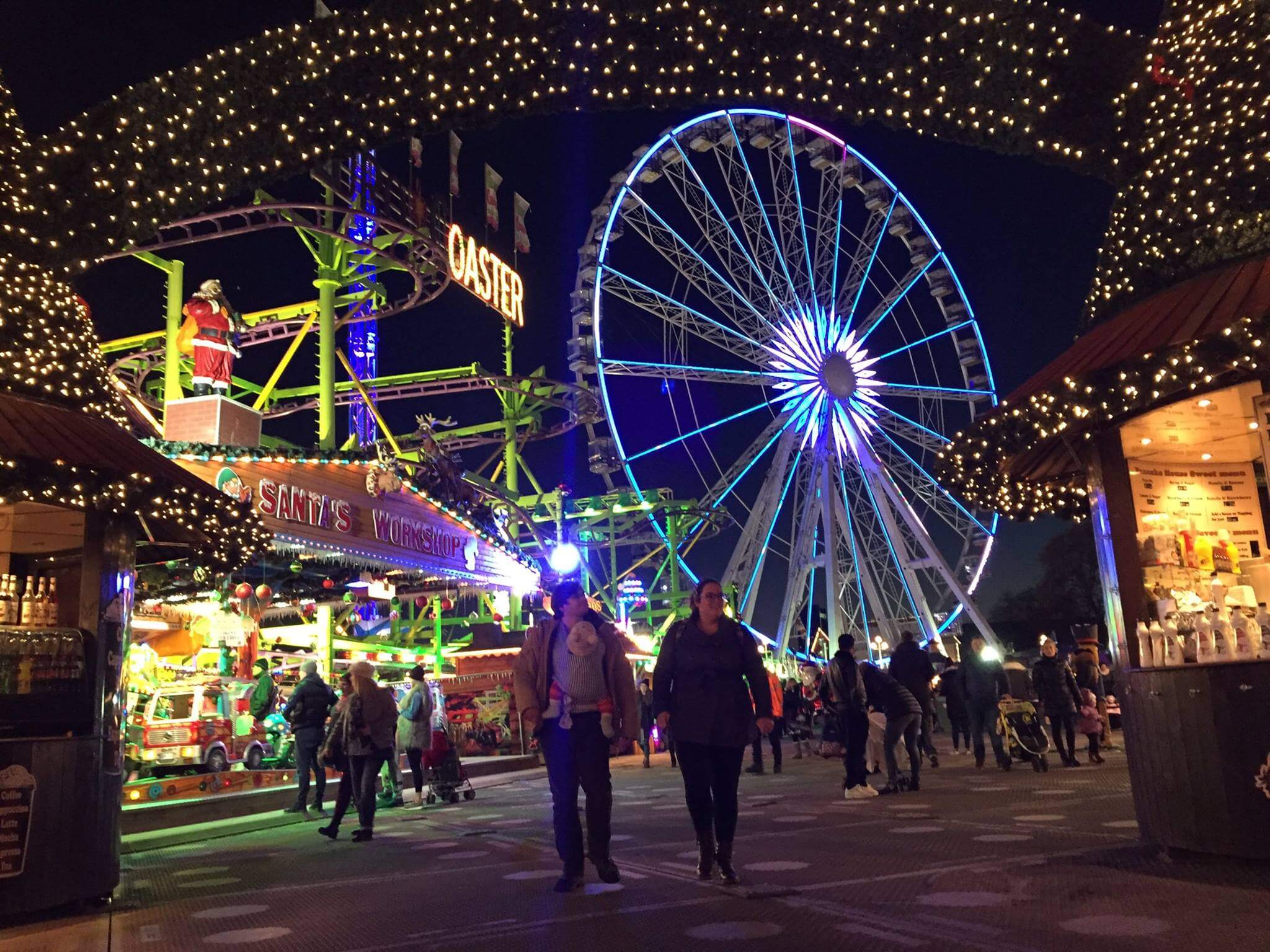 What: Anyone who has ever wanted to visit New York City at Christmas simply must visit the Hyde Park Winter Wonderland. There’s a huge ice rink, two circuses, a big wheel, a Magical Ice Kingdom, Santa’s Grotto, a Victorian bandstand, Christmas markets and even themed bars for adults looking for some festive fun. This year will be the 10th anniversary since Hyde Park Winter Wonderland first started, so they’re sure to be putting on a huge show. Plus, best of all: entry is completely free.

For a New Market: Christmas in Leicester Square 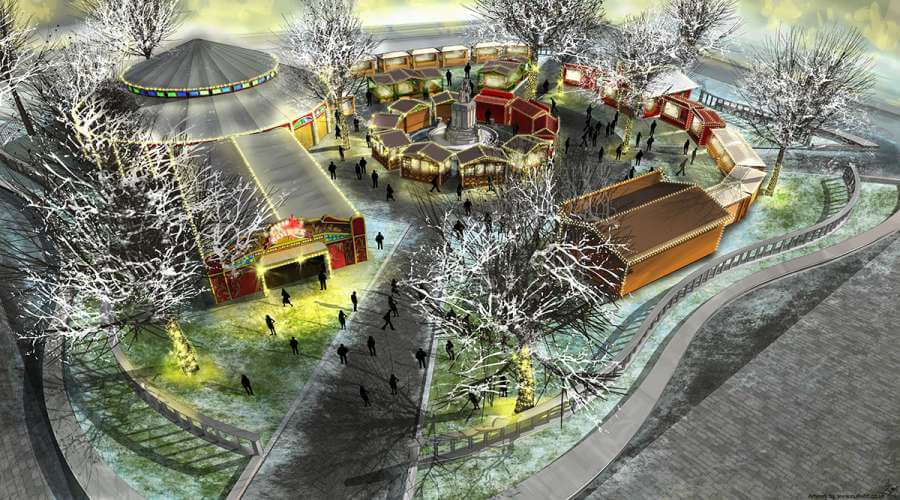 What: If you’ve lived in London for a long time you may feel like you’ve seen everything these Christmas markets have to offer. Well, you’re in for a surprise as Christmas in Leicester Square is a brand new attraction the likes of which nobody has ever seen before. The entire Square has been transformed into a grotto, with a traditional Christmas market and a Spiegeltent where Ursula Martinez, The English Gents, Hamish McCann, Denis Lock and even the La Soiree Circus will be performing. 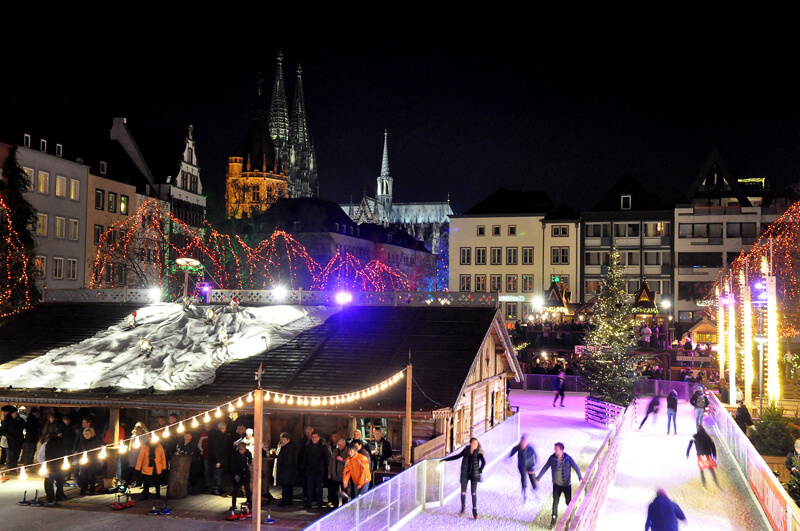 What: Believe it or not, Southbank Centre has also been turned into a winter wonderland this year; or rather, it’s been transformed into a wintry Nordic world. There’s a massive Norwegian tree, plenty of Scandinavian décor, a magnificent market and lights strung above the streets. There are both free and ticketed events including theatrical performances, social dances, choirs and live concerts. There are also Christmas shopping stalls as well as food and drink vendors so you’re sure to have a great time.

For Fun: The X Factor Final 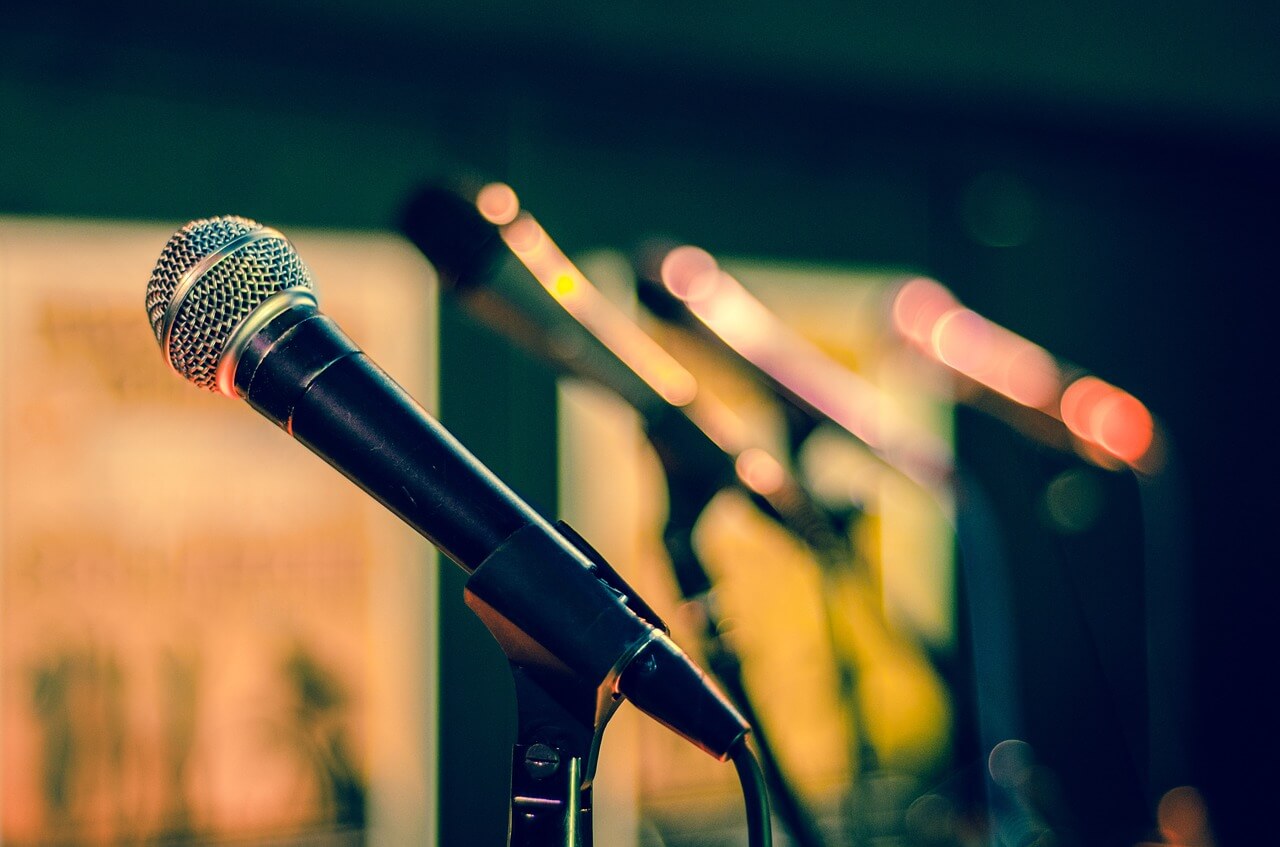 What: Throughout the past few months, millions of people across the UK have been watching contestants progress through the many challenging stages of this year’s X Factor. We’ve watched the auditions, boot camp, the six chair challenge, judges’ houses and now the live shows – but you could now be in with a chance to watch The X Factor Final live at Wembley.

After months of anticipation, tickets for The X Factor Live Finals are about to be released on Applause Store. Tickets to appear in the live studio audience are completely free, so you’re going to have to be quick when they finally become available on the site. Don’t worry about missing out on anything if you don’t get to go, though, because this year you can keep an eye on the latest news and hottest tips on your favourite contestant thanks to Oddschecker.

Where: The Fountain Studios, Wembley

For a Show: Cinderella 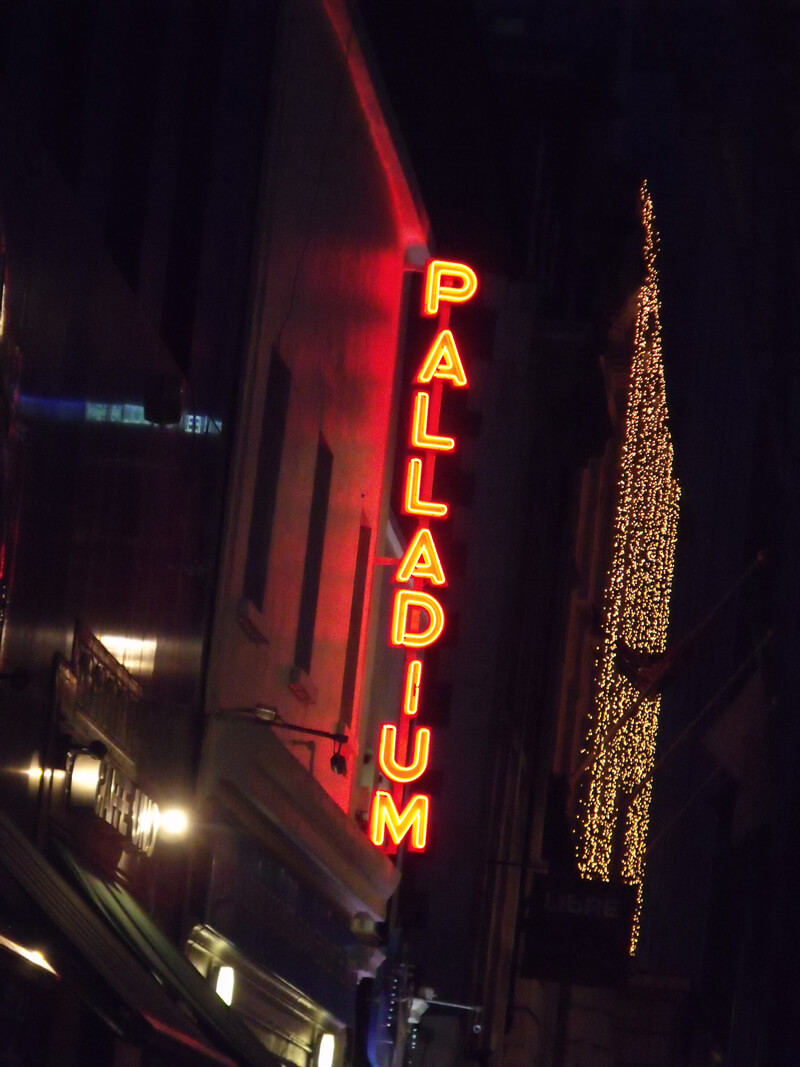 What: Panto will finally be returning to the London Palladium after almost 30 long years this December with the iconic Cinderella show. Not only will Paul O’Grady be starring as the Wicked Stepmother, but Amanda Holden has been cast as the Fairy Godmother, Julian Clary is Dandini, ventriloquist Paul Zerdin is Buttons, and Lee Mead of ‘Any Dream Will Do’ fame is set to play Prince Charming.

Those aren’t the only stars to have been cast in this incredible panto, but by far the most important role is that of Cinderella, who will be portrayed by Natasha J Barnes, Sheridan Smith’s ‘Funny Girl’ understudy. Tickets cost between £19.50 and £79.50 depending on when you go and where you sit, but we can almost guarantee this show will be well worth it. 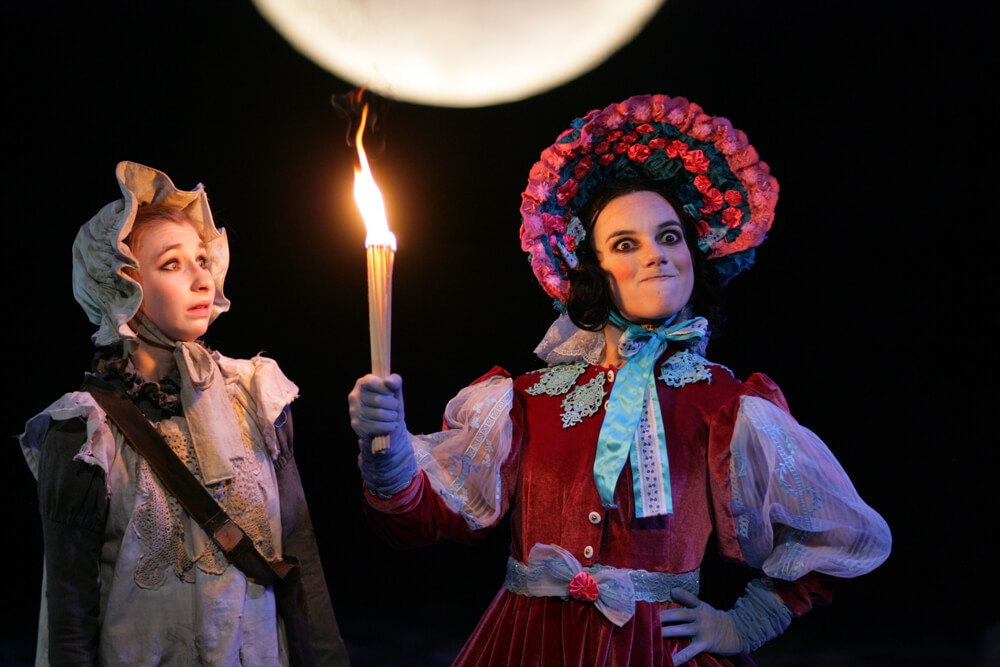 What: Despite the fact that this show hasn’t even started running at Lilian Baylis Studio yet this year, it already has some fantastic reviews to its name. The show is based on Hans Christian Anderson’s classic tale and has been adapted by renowned choreographer Arthur Pita, who has brought the exquisite story of an unlucky little match girl who has been abandoned by her neighbours on Christmas Eve to life.

The play is performed entirely in Italian and combines both ballet and opera to create an enigmatic, emotional, and thoroughly entertaining story. Corey Claire Annand has been cast as Fiametta, a little girl who spends her days attempting to sell matches to passersby, and apparently she is an effortless yet expressive performer. There are only three other performers involved in the show, but somehow the four of them have come together to create a masterpiece.

For Muggles: Hogwarts In The Snow

What: Even wizards celebrate Christmas, and since winter has finally arrived at Hogwarts, it only makes sense to treat the Potterheads in your life to a magical day out. Christmas trees are already lined up along the sides of the Great Hall whilst a festive feast full of Christmas puddings and turkeys sits on the lengthy tables. Meanwhile, the Gryffindor common room is packed with Christmas goodies and a roaring fire is sure to burst into life as you enter. 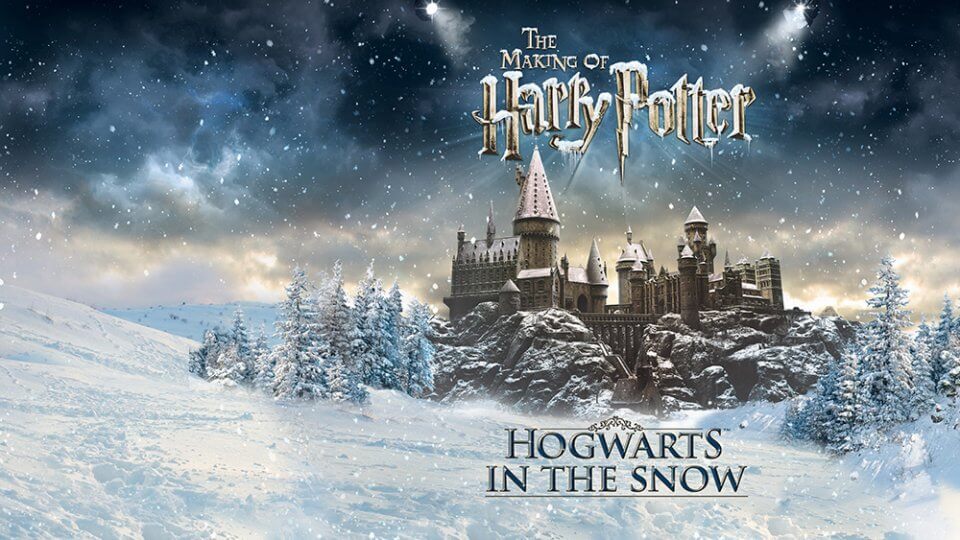 Even the Hogwarts castle model is covered in a fine blanket of snow. Plus, Harry Potter’s invisibility cloak and Molly Weasley’s homemade, hand-knitted jumpers are out on display for visitors to admire. As always, there are many more props and costumes on display, so you can explore the magical world of Harry Potter like never before. 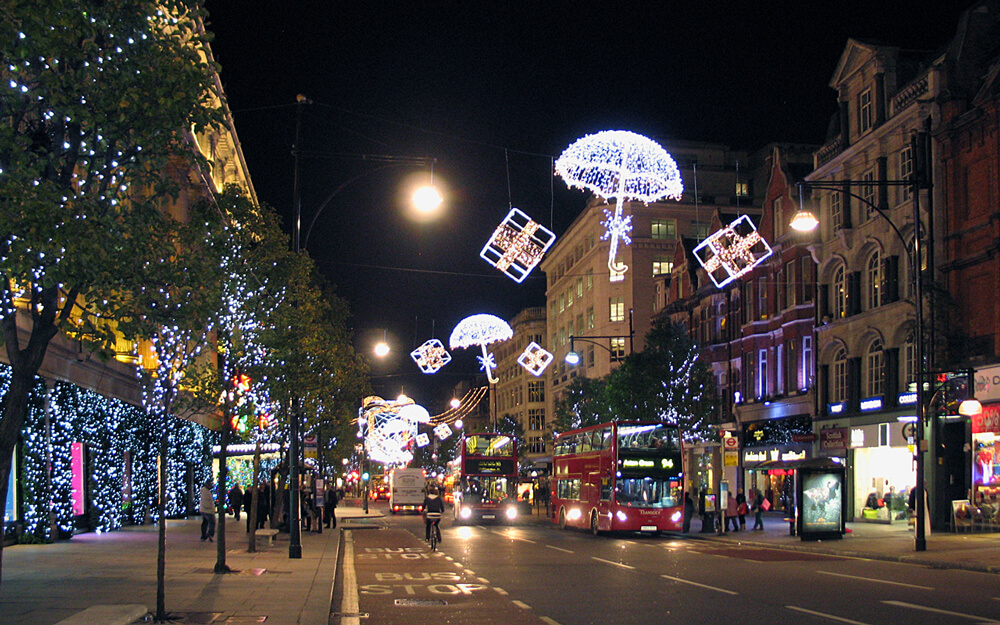 What: Whilst you may have missed the lights being turned on this year, it is definitely worth going to see them before they are taken down at the beginning of January. For the fourth year in a row, the 1778 glorious glowing orbs that are meant to represent snowballs have returned to our favourite high street, all of which were switched on earlier this month by Craig David himself! Even more excitingly, the NSPCC have teamed up with the council this year to launch the Little Stars campaign, where you can dedicate one of the star-shaped lights to a loved one. 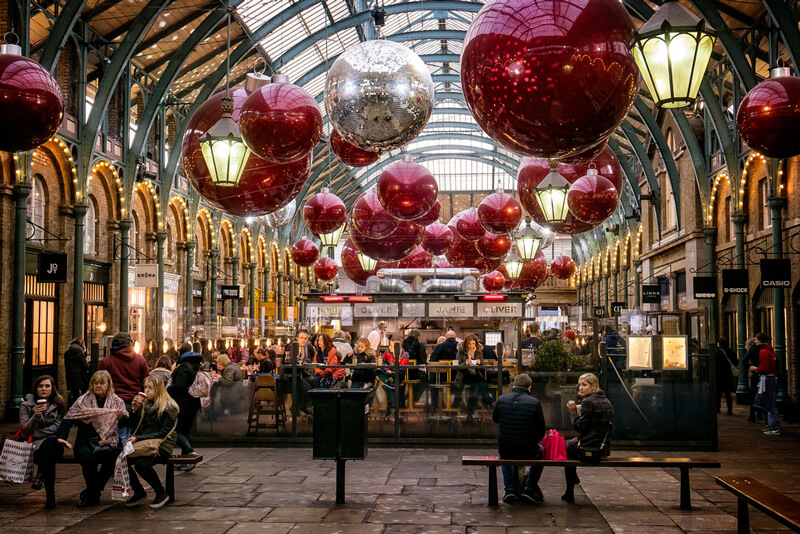 What: This year, the theme in Covent Garden’s Christmas extravaganza is mistletoe, so even if you aren’t keen on seeing fire-eaters or people pretending to be statues it’s worth the visit. There are more than 40 mistletoe chandeliers hung above the streets, whilst a magnificent Christmas tree can be seen at the west of the piazza. There’s also a huge silver reindeer in there somewhere, stood on top of a large pile of gifts, whilst the Lego Santa Express can be found in the north-east corner of the piazza.

For a Day Out: The Enchanted Woodland 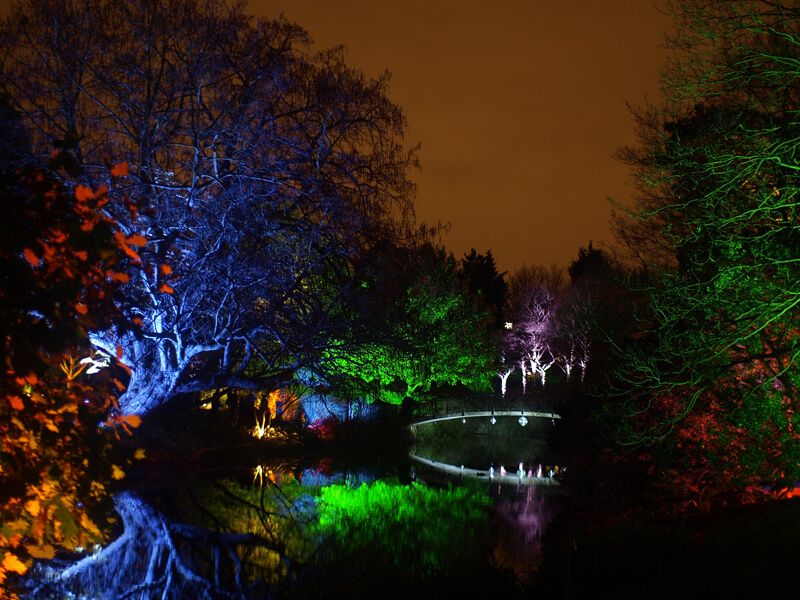 What: For the 11th year running, Syon House and Park have opened up their grounds to visitors who wish to experience a true Enchanted Woodland. Their 600-year-old gardens are packed with over 400 different species of trees, each of which have been decked out with their own exclusively designed illuminations. If you walk through the park swiftly, you may be able to complete the trail in 30 minutes, but if you truly wish to savour the lights then this could be an incredible evening out for all the family. 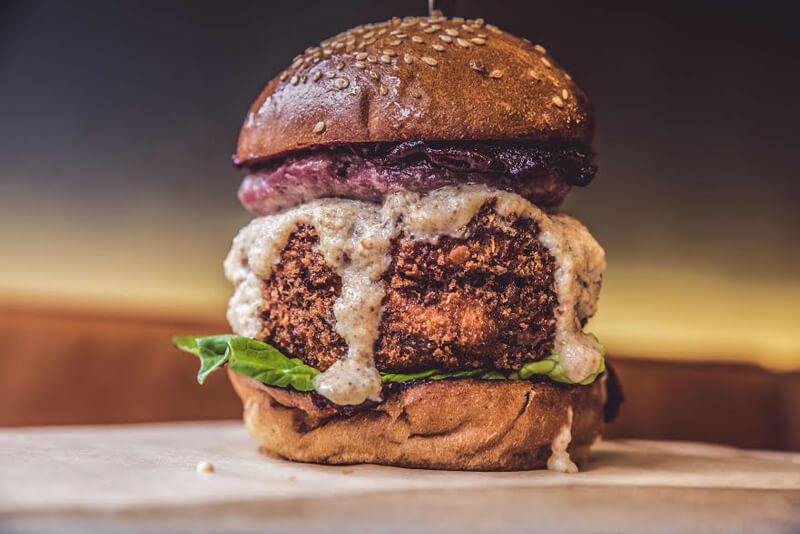 What: This year at John Lewis, you are encouraged to attend Mac & Wild at The Garden Society’s Festive Forest to try some delicious highland dishes. Mac & Wild will be serving their award-winning ‘Veni-Moo’ burgers, or if you want to get even more involved, you can take one of their masterclasses in fine whisky. There are also private lodges up for grabs that can fit up to eight diners inside.

What: At Shepherd’s Bush Yard this Christmas, street food meets a festive feast in the wonderful English-garden themed winter paradise. There are Christmas trees, illuminations and more Christmas decorations than you can shake a Yule log at. Plus, there are some famous vendors including La Bao, Cheeky Burger and Bull & Rancher. 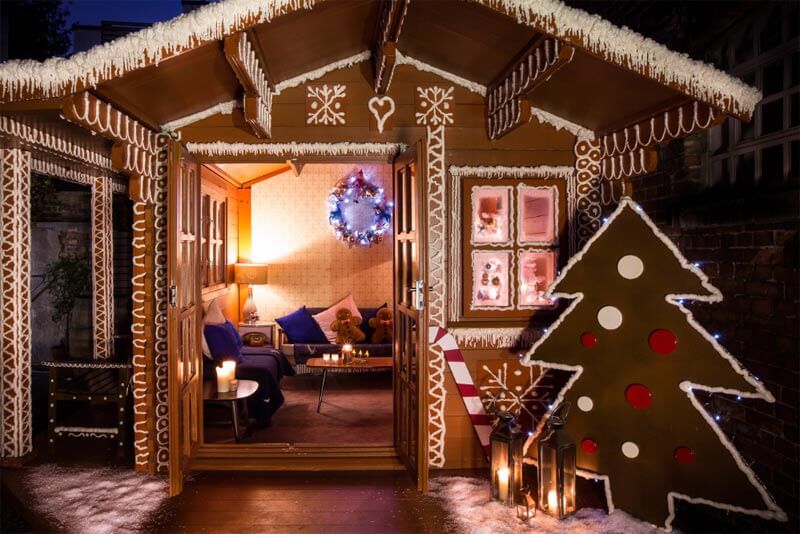 What: York & Albany have gone all out this year to celebrate all of the upcoming party season events. Whether you want to celebrate Christmas, New Year, Valentine’s Day or any other special occasion that happens to pop up between now and the end of February, they’re offering you their gingerbread cabin. They’ve even created exclusive menus that include such items as gingerbread afternoon tea, crème brulee, stem ginger and cranberry scones, gingerbread macaroons and much, much more. 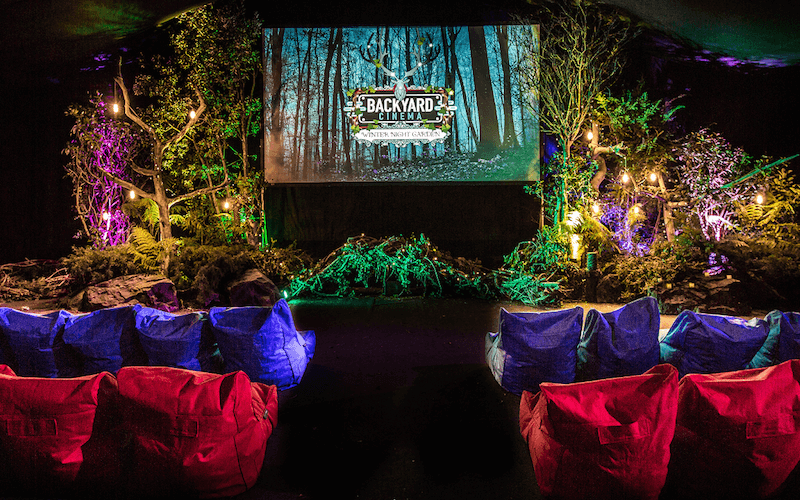 What: Every year, Backyard Cinema create a fantastic line-up of festive films, and this year is no different. Home Alone, Love Actually, Elf, It’s a Wonderful Life, Mean Girls and many other Christmas favourites will be airing at some point. That said, you better be quick, because tickets usually sell out quickly.

For Something Different: Alternative Christmas Carols 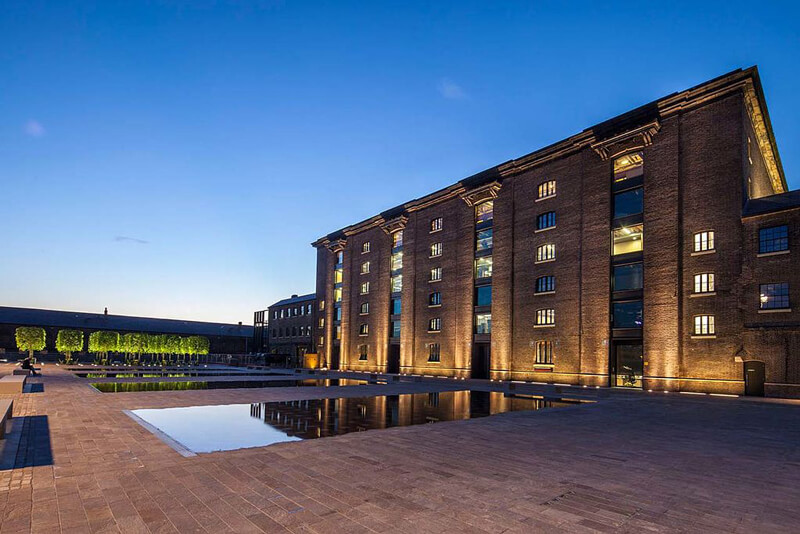 What: This December, why not mix things up a little bit by indulging in some alternative Christmas Carols? The School of Life will be coming together at Granary Square at 6.30pm to sing some Mariah Carey Christmas classics and you’ll even get a cup of mulled wine to keep your vocals on point.

For a Good Cause: ChildLine’s Merry Little Christmas Carol Concert 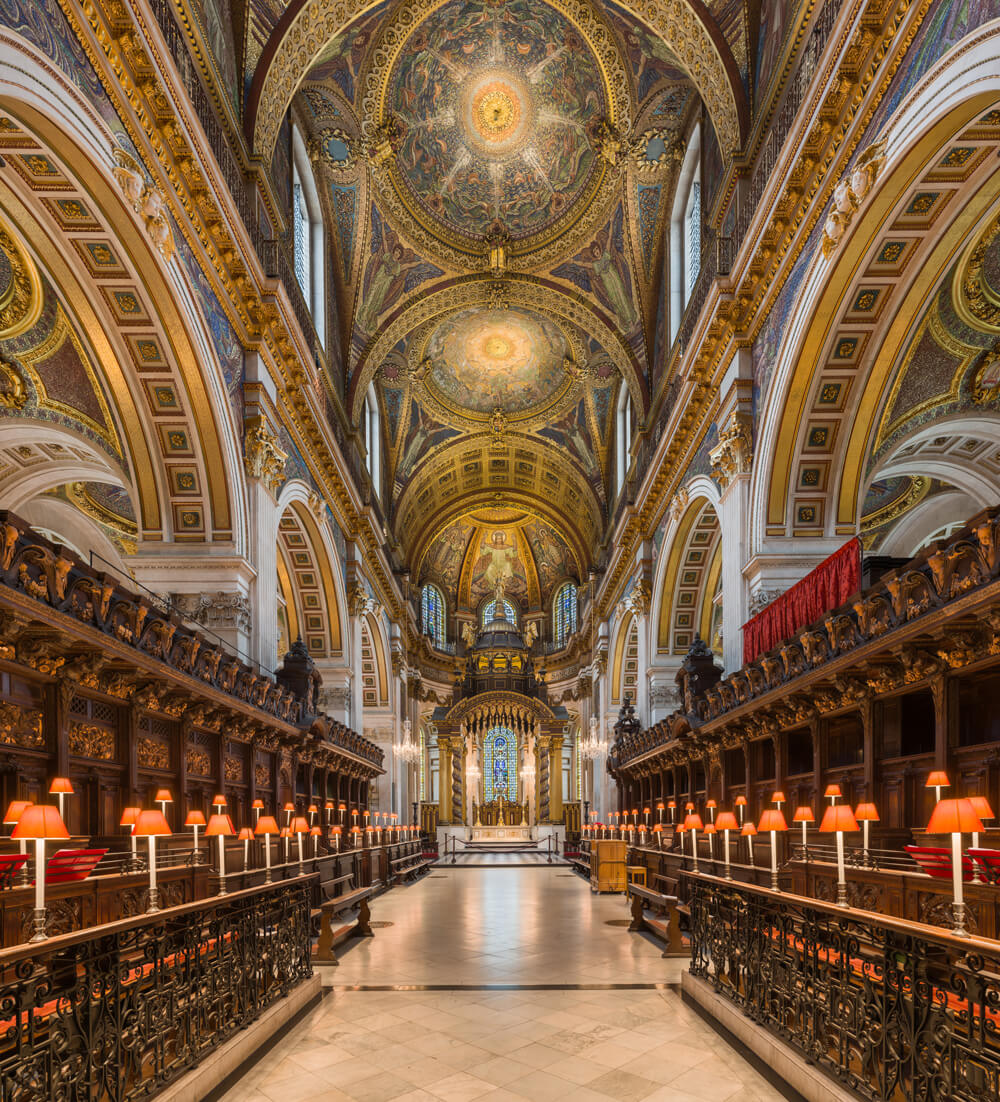 For All the Family: Yule Rock, The Ultimate Festive Singalong 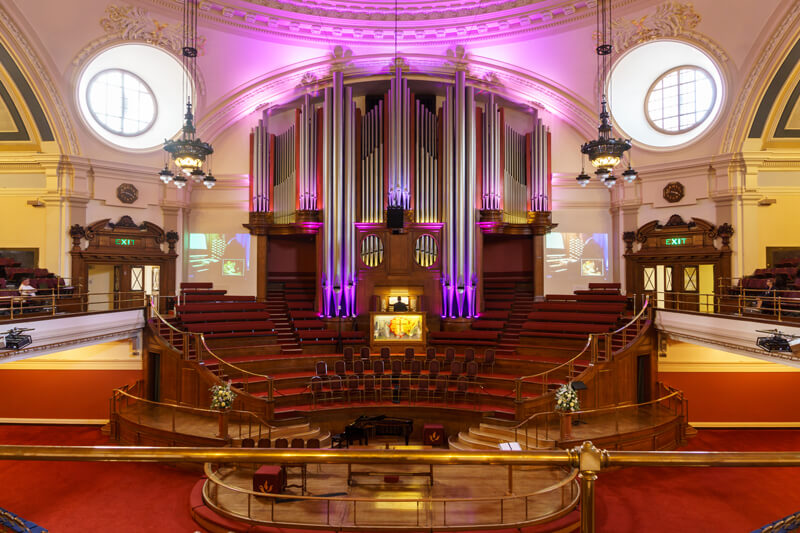 What: Who could possibly forget the annual Yule Rock Festive Singalong, which is being held at Westminster Central Hall this year? In its third year, there will be over 2,000 people gathered together to sing their favourite Christmas songs at the top of their voices. The concert is run by the charity Sunday assembly as well, so you know you’re giving the gift of enjoyment to others in your community.

For Tradition: The Peter Pan Cup

After opening their Christmas presents in the morning, the Serpentine Swimming Club will be swimming 100 yards in their annual Christmas Day race. Considering the race has taken place every single year since 1864, it must be well worth the visit even if it does take place at 9am on Christmas Day. Fortunately, you’ll be right near the Serpentine Café, so you’ll be able to have snacks and hot drinks throughout.