London / Culture / Theatre / About Time You Saw: Curtain Up

“Curtain up! Light the lights! You got nothing to hit but the heights.” Mama Rose said it right as she belted out her aspirations and dreams of stardom. The razzmatazz and sometimes raucous world of getting a show to Broadway or the West End is a thing of theatre in and of itself. This year the V&A celebrates the rich creative theatre talent in the West End of London and New York’s Broadway, two world class centres of theatrical excellence. Exploring the extraordinary range of craft and collaboration that goes into creating award-winning plays, musicals and productions, Curtain Up: Celebrating 40 Years of Theatre in London and New York engages and expands our understanding of some of the worlds most loved shows. 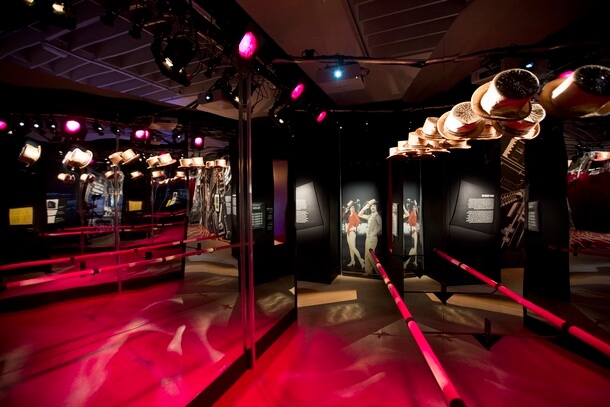 The temporary exhibition will run until August 31st, located in the Theatre and Performance Galleries (Third Floor) at the V&A Musuem. Free of charge, the exhibition is a recent retrospective of theatrical exchange between the West End and The Great White Way.  On display expect to find and array of costumes, designs, models, photographs, archival production material, film and awards. Opening up these theatrical domains, visitors will have the opportunity to step into a scene from The National Theatre’s production of The Curious Incident of the Dog in the Night-Time, specially designed for Curtain Up. This crosshatch of lighting design and video instillation makes for a spectacle treat to conclude the exhibition. Other highlights include original costume designs from The Phantom of the Opera by Maria Bjornson (1986), one of the longest running West End musicals, and the longest running Broadway production in history; a selection of golden top hats from A Chorus Line and Dame Helen Mirren DBE’s dress designed by Bob Crowley and worn in The Audience, a role which she won both an Olivier (2013) and Tony Award (2015) for Best Actress. Visitors can see the set models for Matilda the Musical, designed by Rob Howell as well as models from the National Theatre’s award-winning production War Horse (2007). 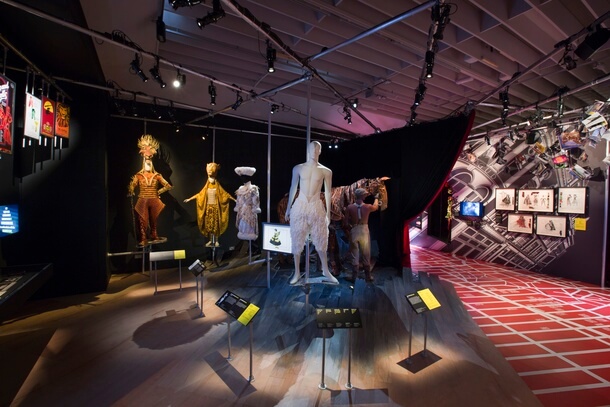 Exploring the evolution of these two transatlantic theater cities, Curtain Up is a magical journey that engulfs the viewer in the captivating and charismatic world of theatre. Whether a theatre aficionado  or novice, this accessible and engaging temporary display latches onto your interests across celebrity, performance, design and production and whets you appetite with a varied and tantalising fare. Moving from section to section, you will be struck by a variety of audio to engage your ears and send your feet a tap tap tapping, with A Chorus Line’s ‘One’ providing a winning musical moment in the opening phases of the exhibition. A jaunty trip to Cromwell Road, Curtain Up will engage a broad and varied audience, raising the curtain on some of the UK and America’s best loved theatre. 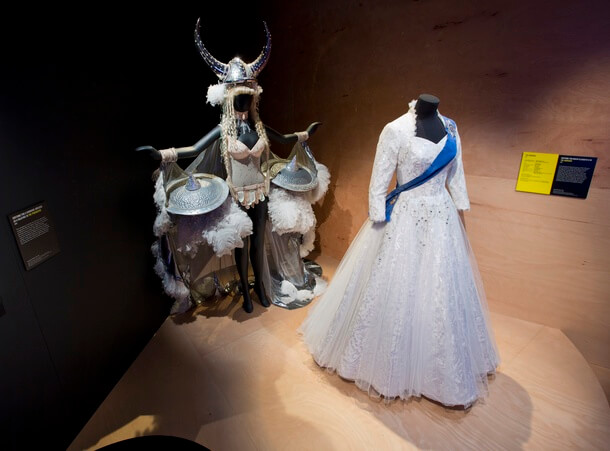