London / Special / Events / About Time: You Ran the London Marathon

About Time: You Ran the London MarathonBy Owen Bloodworth

​Over the last few years I’ve become an avid watcher of the London Marathon. ​It wasn’t until last year, when I was behind the barrier cheering on my friend at the 14th mile, that I realised this was something I wanted to undertake. Sure, I’ve ran before; a few charity races and fun runs here and there – but nothing on this scale. My running career thus far has found me pounding the treadmill at my local gym, hitting 10k, heading back home, and hoping I could push myself a little further the next time.

In January this year, I was approached by Lucozade Sport with the invitation to take part in the marathon. Having not secured a space in the ballot – for me it was a no brainer. However, with the Baileys just settling on Christmas and my stomach still laded with selection box chocolates, I thought it was about time I dug out my trainers and set about a training plan. Last month, with only 4 months of training under my belt, I finished the London Marathon in 4 hours and 50 minutes.

If you’re thinking about entering for next year’s race, I’ve put together a guide on some of the best ways to tackle the infamous London Marathon.

The London Marathon: Training and Preparation 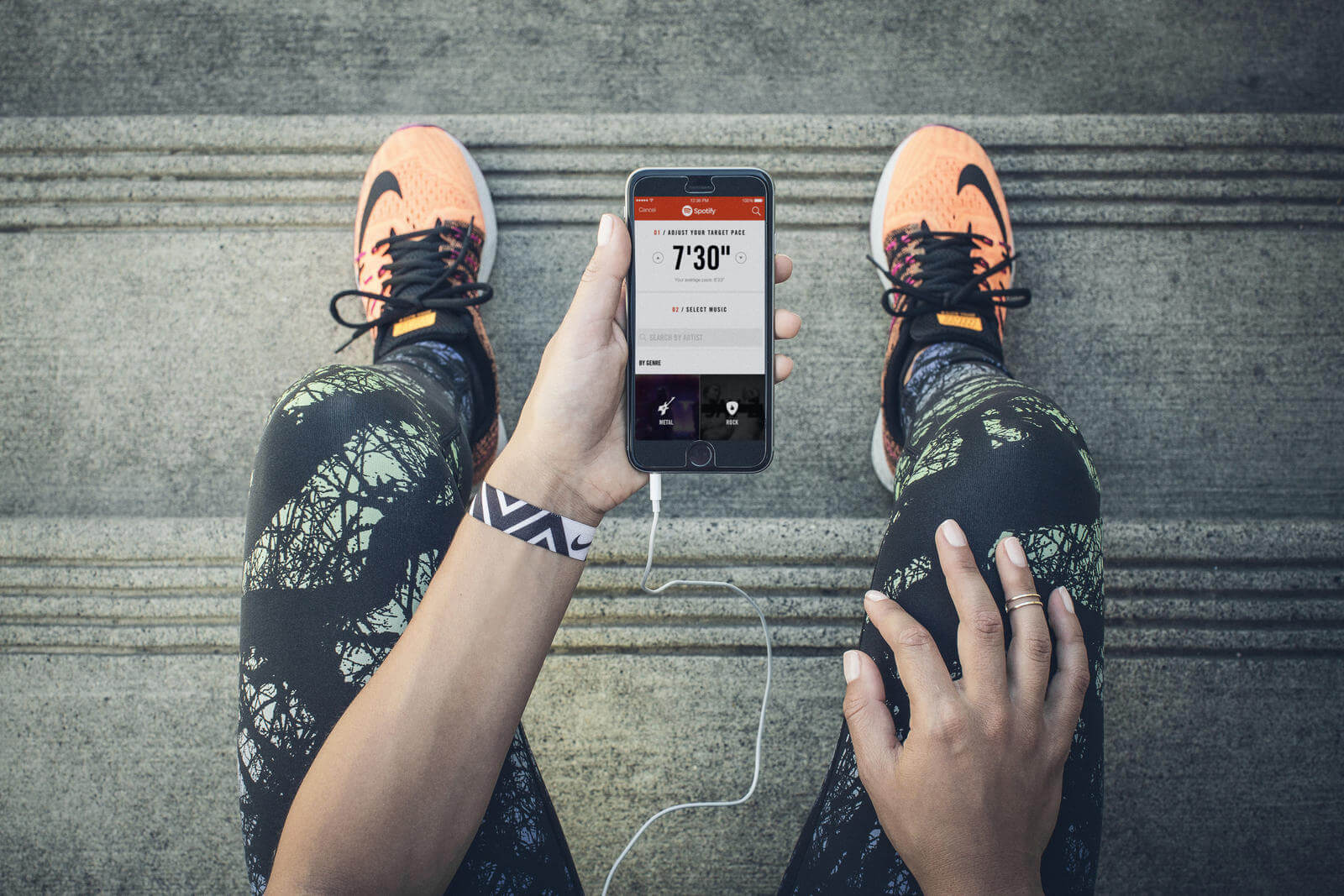 As this was my foray into long distance running, initially I was overwhelmed with the choice of apps and how to start the training process. Everyone trains at different levels and speeds, but I devised a plan using the Nike Run app which puts together a whole plan for me to run – right up until the marathon itself (I’m still getting notifications to go for a run which are currently being ignored). This was incredibly helpful in gauging how much running I had to do to be match fit in time for the marathon. It was pretty daunting to look at from the start (the 18 mile run was not one I was looking forward to), but it was essential for me to plan out my goals.

When I started I was wearing an old pair of trainers and soon learned after barely being able to walk for a while that a decent pair of trainers is a must, and it’s also worth investing in some good quality, breathable t-shirts as anyone with chafed nipples from running will testify to. 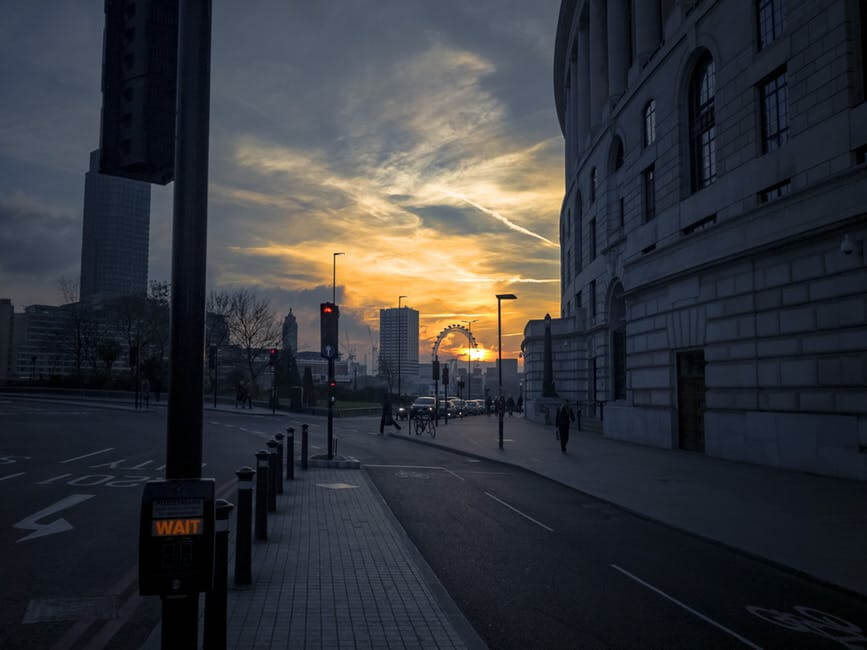 But it’s not all about the running – as I quickly found out. Undertaking other exercises helped with building stamina; I still needed all-round fitness which boxing provided in buckets, plus it helped to throw a few uppercuts at a punching bag when I was totally fed up with the running (which happened pretty regularly).

While you want to hit the ground running (quite literally), it’s also worth mentioning that rest days are imperative in order for your muscles to heal and for you to push harder the next time. I reduced my training 2 weeks before the event – also known as ‘taping’. It seemed counterintuitive to cut down my runs, and rest longer – but it’s imperative for full recovery from previous workouts and for peak performance on the day itself.

And taking advice from a keen running friend I purchased a cheap roller. A godsend and an essential piece of kit for ironing out your muscles before and after training. 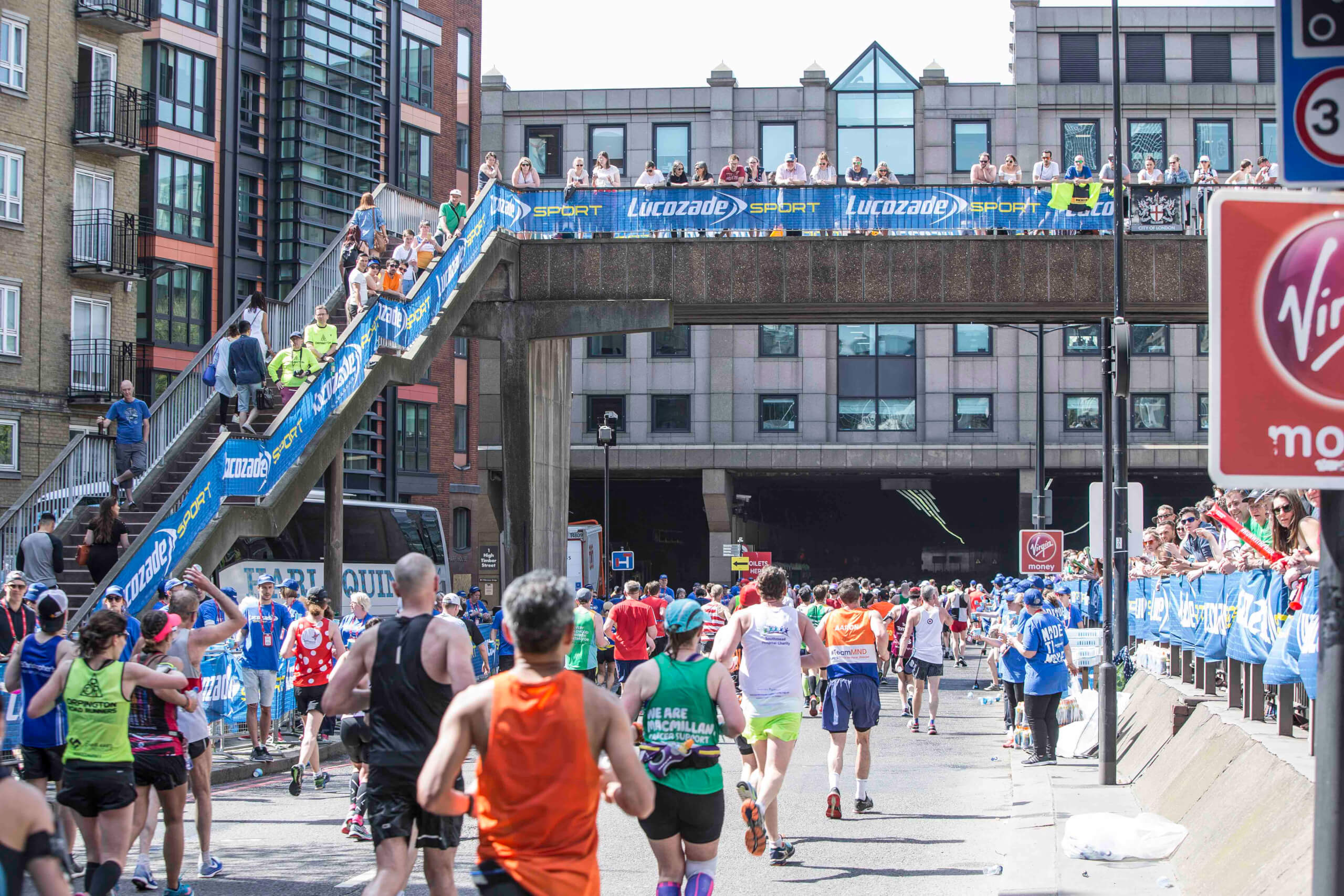 Whatever people tell you about the ‘pre race fear’ is totally true: I couldn’t relax. According to my trusty app, and advice from my boxing trainer I should just take it easy – this was very difficult to do as I couldn’t sit still for more than 20 seconds, so I ended up walking from Stoke Newington to Shoreditch instead, searching for the shiniest pair of new kicks money could buy. I also tried not to overthink things, and I followed a few simple steps that I picked up from a hydration and fuelling talk with Lucozade Sport’s Scientist, Kat Shaw for the night before. I ate a dinner that was rich in carbs, and nothing that was spicy or high in fibre. The day before is not the time to whipping up some mad Masterchef concoction – eat something you enjoy. I prepared all my kit ready for the morning and hit the hay at a reasonable time, which allowed my meal to digest.

On the morning I ate my breakfast four hours before the race, which meant that I wasn’t running on a full stomach. The classic combination of porridge made with milk and topped with banana was heavy on the slow releasing carbs and easy on fats and fibre.

As much as the phrases ’21 degrees celsius’, ‘the hottest race day on record’ and ‘don’t faint’ was helpful, it didn’t do anything to calm the pre-race nerves. The race itself was probably one of the hardest and most amazing experience I’ve ever had. The start area is a very strange experience; a little bit like being at a festival except for the lack of warm Dark Fruits can in my hand. The first 10 miles flew by amid cheers (I learnt from previous experience that having my name on my t-shirt got me extra love) and thoughts of sprinting over the finish. Then my body decided it had had enough; first the hips went then the ankles, to the point that my confident and noble jog had become a weak limp. 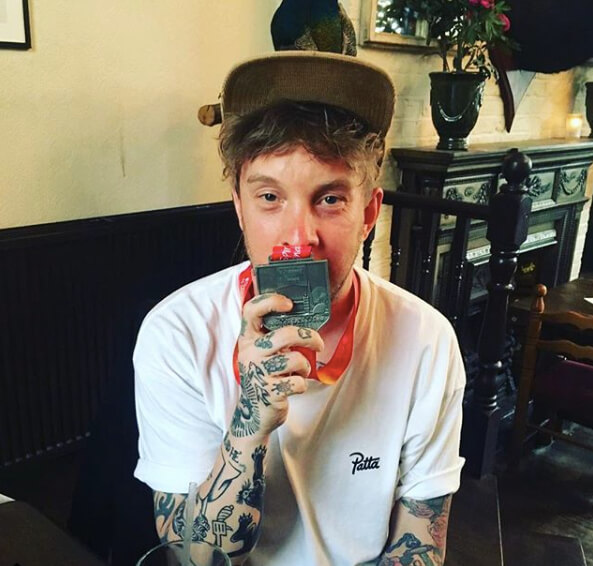 By mile 18 the emotions hit hard, and along with it a few tears. I still had 8 miles to go, my legs weren’t working and I was really hungry – it was time to tap out. Luckily I’m incredibly stubborn, and that combined with the support of my amazing pals at every corner picked me up again and again until the finish was finally in sight. And it was an incredible sight. My mum, who had been following my progress via the app at home, managed to get a photo of me crossing the finish line from the TV, and I hadn’t truly realised what it meant to complete that race until I saw my face on the screen. Sheer and unadulterated relief. It was literally one of the best feelings I’ve ever experienced. 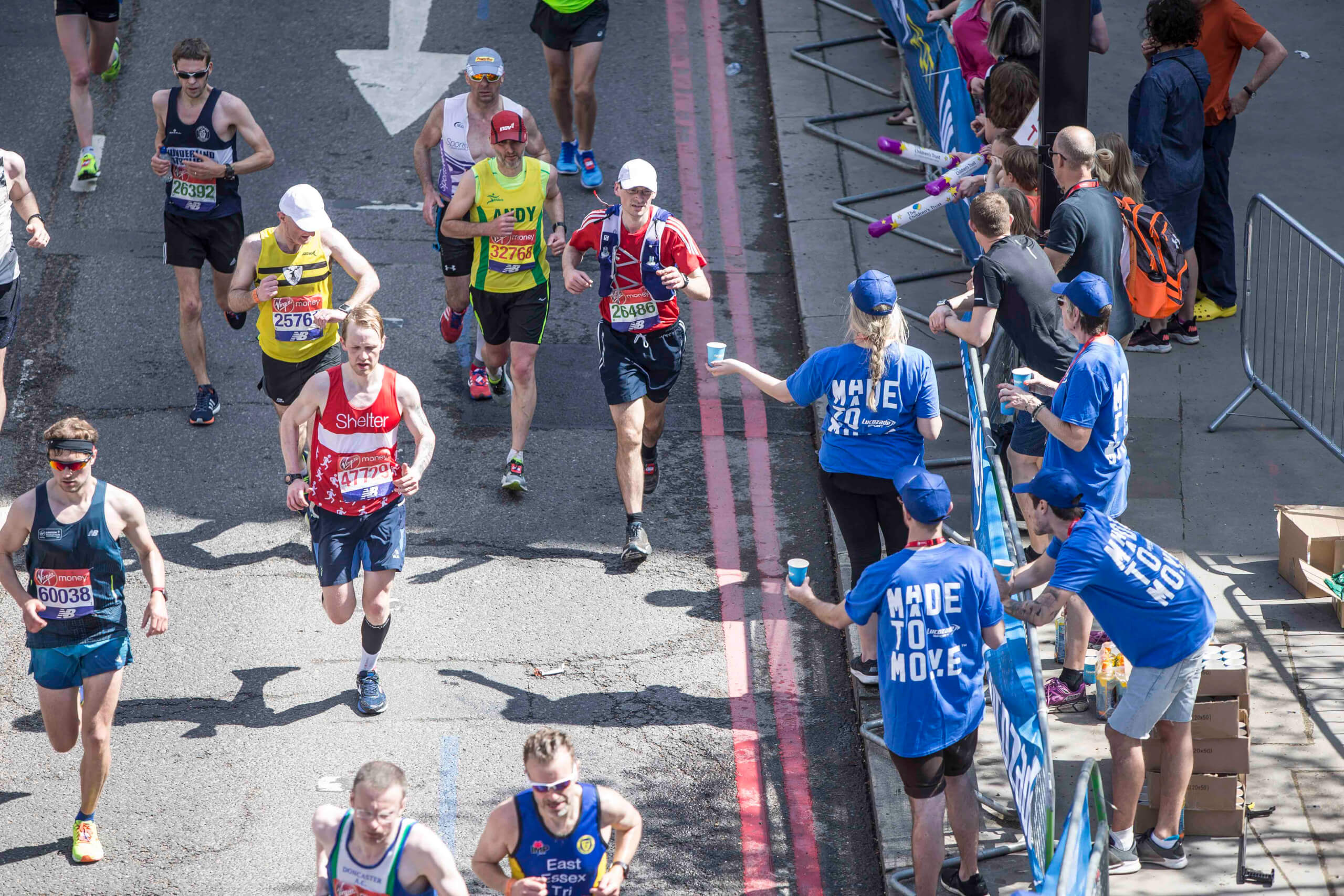 Do it properly; train hard, eat well and go at your own pace. Even completing it is an achievement, let alone doing it in a certain time.

Speaking from someone who generally spends as much time as they can on the sofa, I’ve surprised myself in the fact that I actually now enjoy running. I feel fitter, my skin is better and I’m slowly losing the weight that too many slob days have incurred. I’ve even carried on running since. Who’d have thought? 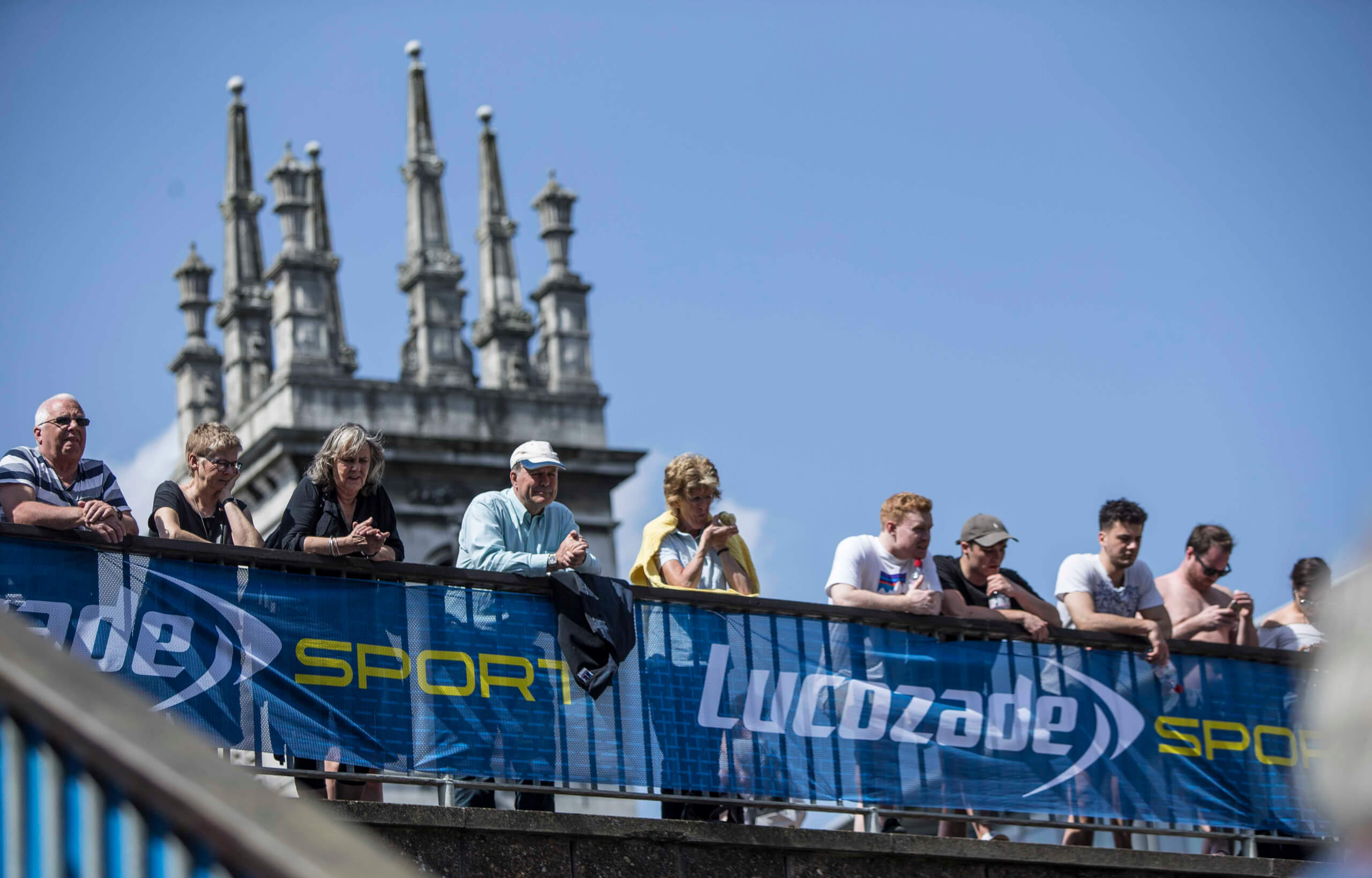 – Do accept the vaseline that gets handed en route: it’s essential to combat the life threatening chafing that occurs.

– Do raise money for charity. The karma points are totally worth it.

– Do stay hydrated. Just remember to take little sips and not down the whole water. Little and often is key.

– Do make the most of the numerous water and Lucozade Sport points along the way.

– Don’t accept glasses of prosecco from well-meaning friends on the way round. It seems like a good idea at the time, but ultimately the bubbles just gives you indigestion.

– Don’t overload on the jelly babies that people hand out on the way. As delicious as they are, with every sugar rush comes a sugar crash.

– Don’t go out and get hammered in celebration of completion. I’m pretty sure I managed to double my recovery time after that bender. 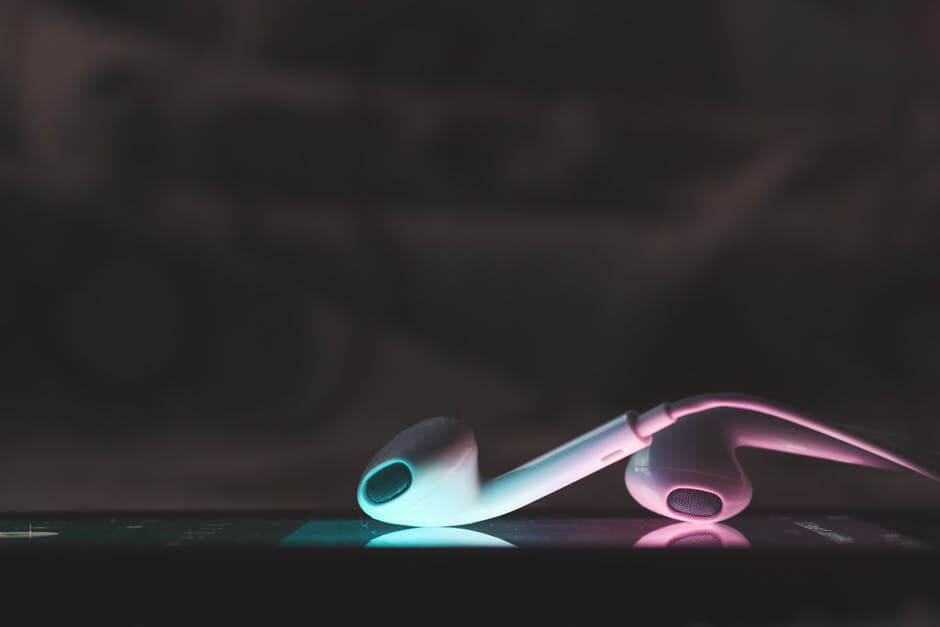 With every long distance run, you need some killer tunes to help you round. Here’s a few of my favourites – as you can see the theme ‘believe’ is pretty apparent.

6. You Still Believe In Me – Beach Boys

Owen ran as part of team Lucozade Sport – the official sports nutrition partner of the Virgin Money London Marathon 2018. Get rewarded for your running with their re-launched Lucozade Sport Made to Move App, free for iOS and Android. For more information on Lucozade Sport, visit their website here. 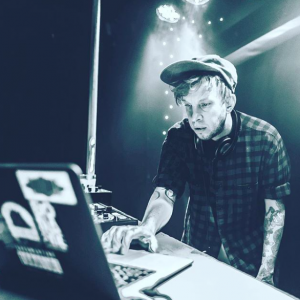 Owen is a freelance writer and works in music PR.