London / Culture / 7 of the Best: October Beer Festivals in London

7 of the Best: October Beer Festivals in LondonBy Iona Goulder

Let’s make some pour decisions this month. From a tap takeover to several Oktoberfests hitting the capital – here’s the best beer festivals taking place in London this month. It’s time to stein: 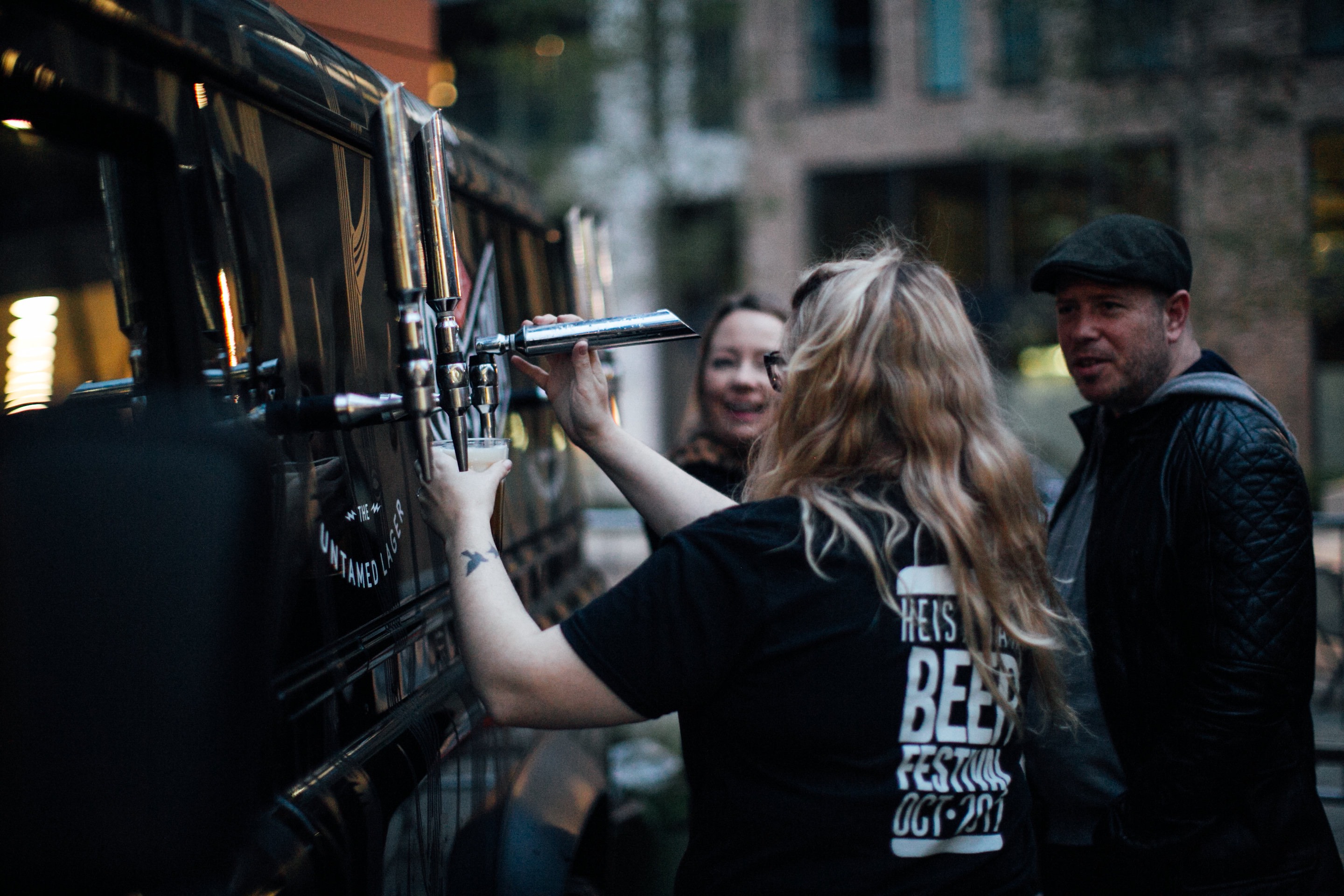 The Run-Down: Three top breweries Fourpure, Siren and Wild Beer Co. will be taking over the bar’s twelve taps across the weekend and will be launching special seasonal releases and exclusive collaborative brews. The weekend will also include hands-on workshops taking place in the ‘Games Room’ featuring the likes of beer and cheese pairings, beer games, non-alcoholic beer sampling and beer yoga (we love a weird fitness concept).

Price: Tickets are priced at £15 and include a festival beer glass and two beers from the day headliner. Buy here. 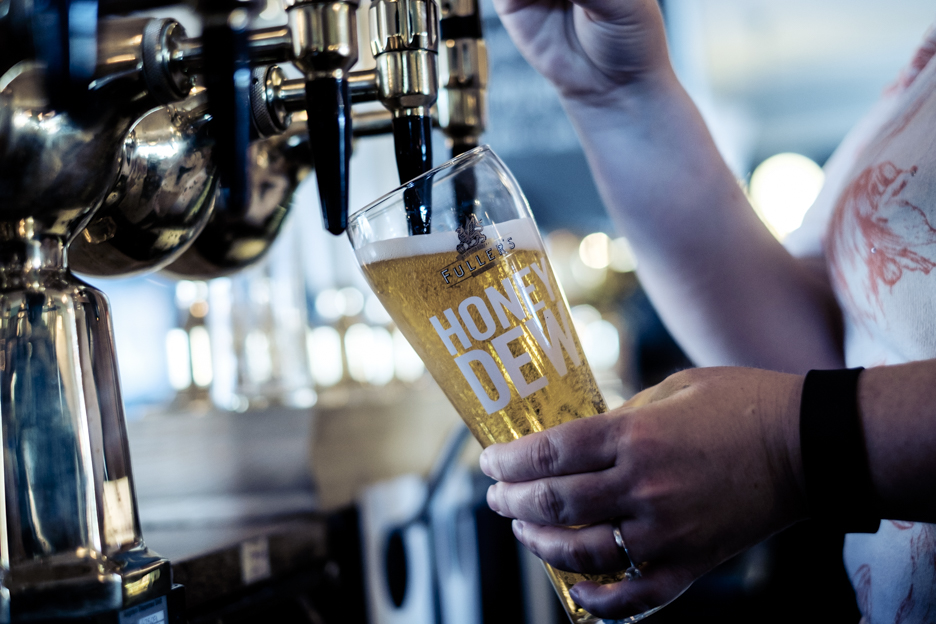 What: Royal Wharf, Ballymore and Oxley’s new riverside neighbourhood in London’s Royal Docks will host an Oktoberfest beer tasting event on Thursday 11th and Friday 12th October 2018. Putting a British twist on the Bavarian festival, sample a selection of locally brewed Fuller’s beers, each paired with a unique dish to bring out the full flavour of each drink.

The Run-Down: Held in partnership with Fuller’s, the beer tasting will take place in the Royal Wharf Marketing Suite overlooking the River Thames. With sweeping views of Greenwich Peninsula and the Thames Barrier, beer enthusiasts will have the opportunity to sample some of Fuller’s most famous creations, while discussing the flavour and complexities of each beer with Fuller’s team of expert sommeliers. The pairing menu includes: London Pride with baked camembert and redcurrant jam, Frontier with bratwurst in a beer and horseradish mustard, and Black Cab Stout alongside a rich caramelised onion and bacon Spaetzle and many more.

Price: Tickets for the event can be purchased here and cost £35 per person.

3. For a Free Party: Pop Brixton 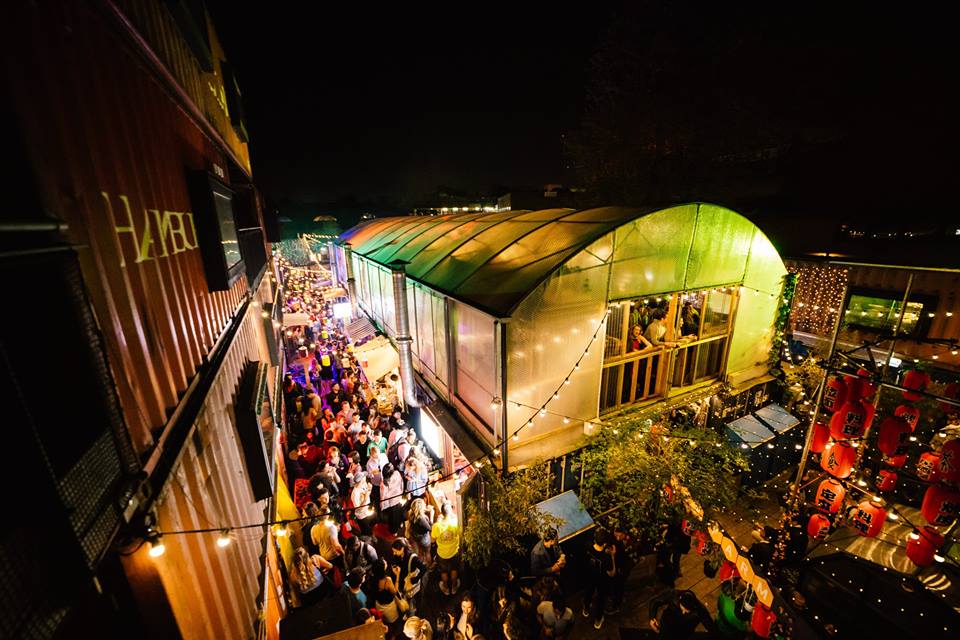 What: Following the huge success of the first Brixtoberfest last year, Pop Brixton’s two-day celebration of all things Bavarian returns on the 12th and 13th of October.

The Run-Down: The celebrations wouldn’t be complete without a pop-up german market, steins overflowing with German beer (imported directly from the Oktoberfest breweries in Munich, no less) and a live Oompah band putting their spin on sing-a-long classics. They’ll also be prizes for the best dressed Bavarian on the night. Lederhosen strongly encouraged.

4. For Sausages and Steins: Camden Oktoberfest 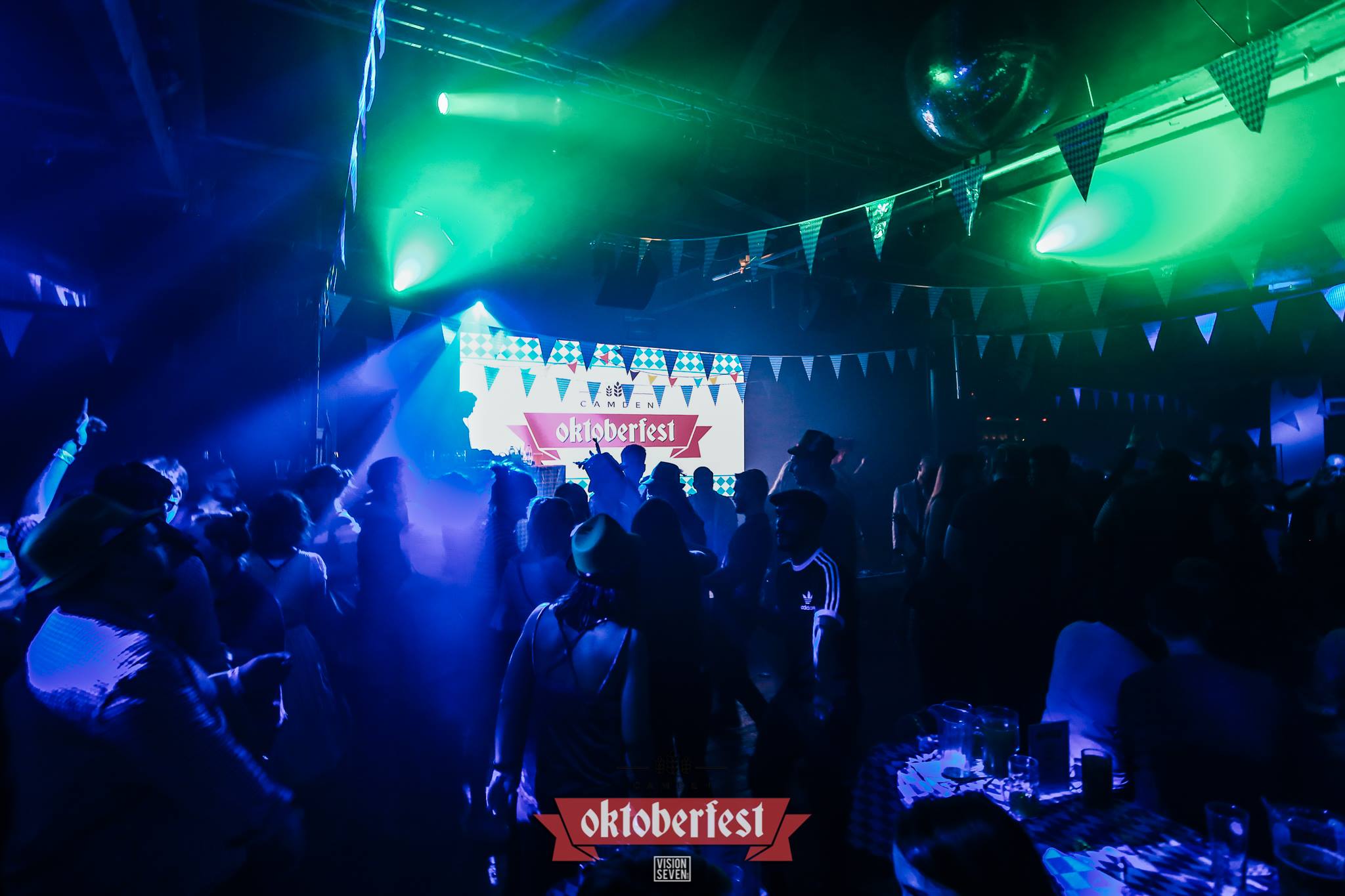 The Run-Down: Oktoberfest is all about the liquid gold, and Camden’s Oktoberfest will be no different. The highly regarded beers flying over from Germany are supplied by Spaten, Löwenbräu and Becks all served in the renowned glass stein to all. Herman ze German will provide its legendary sausage, with grilled Black Forest sausages, currywursts and Brotzel (pretzel alternatives) available. And the tweed-clad 10-piece brass and drum collective, The Dirty Old Brasstards, will play an eclectic fusion of pop, rock, hip hop, R&B, funk and soul covers across both dates. 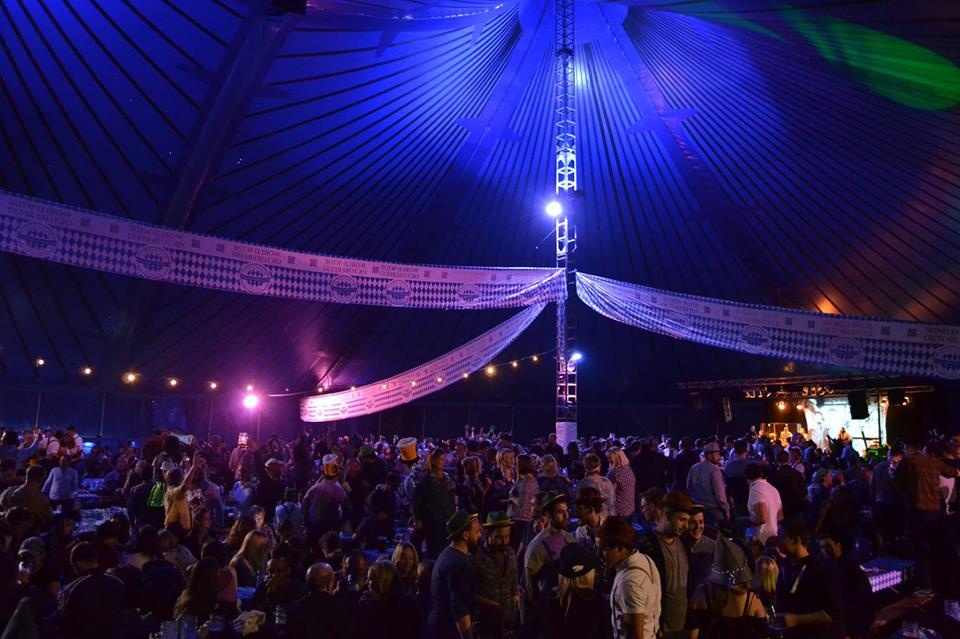 What: London Oktoberfest is the biggest beer celebration in the UK (4th-14th October) with two outposts in the capital (Millwalk Park and a special Halloween themed bash at Finsbury Park). The huge Oktoberfest tent (you can’t miss it from Island Gardens DLR) will be kitted out with all the Bavarian must-haves: long tables, blue and white bunting and typical German eats up for grabs.

The Run-Down: London Oktoberfest have pulled out the stops for their special beer filled knees up; they’re flying in bands from Germany, waitresses and waiters will be dressed in Dirndl and Lederhosen, bratwurst will be available, and and they’ll be plenty of German beers on tap. This is one hell of a party you don’t want to miss.

6. For the Bavarian spirit: Bavarian Beerhouse 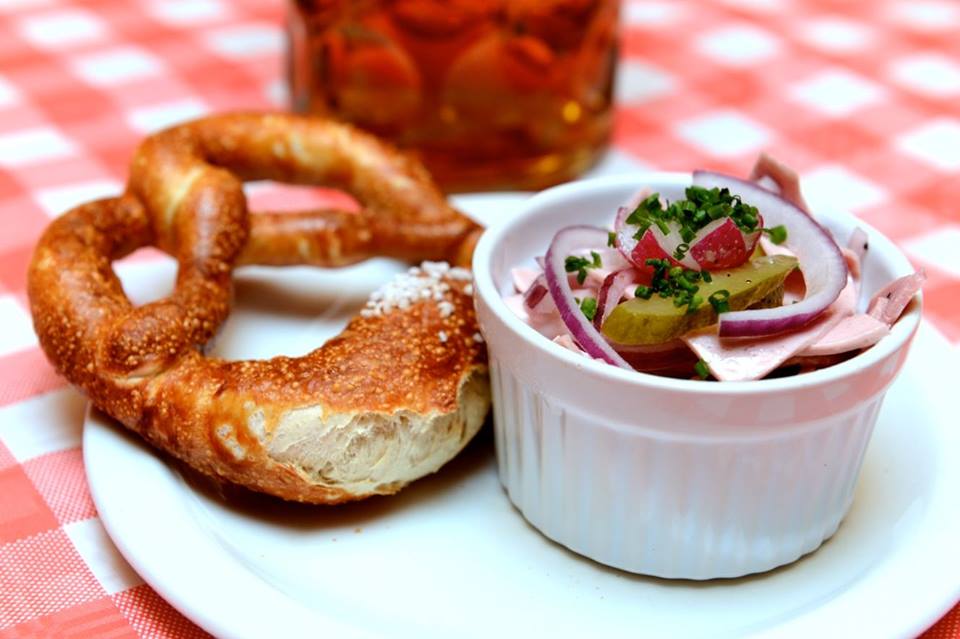 What: Running every Wednesday – Sunday until 20th October, Bavarian Beerhouse have been putting together Oktoberfests since 2004. With its rustic decor and the classic Bavarian beer benches, this Oktoberfest has got bags of European charm.

The Run-Down: In order to transmit the real Bavarian spirit, all of their live bands come from Germany. Enjoy freshly tapped, ice cold German beer served in huge Stein glasses and choose from a selection of the most popular Oktoberfest specialties, such as pork shanks, sausages or dumplings.

7. For a Taste of Germany: Erdinger Oktoberfest 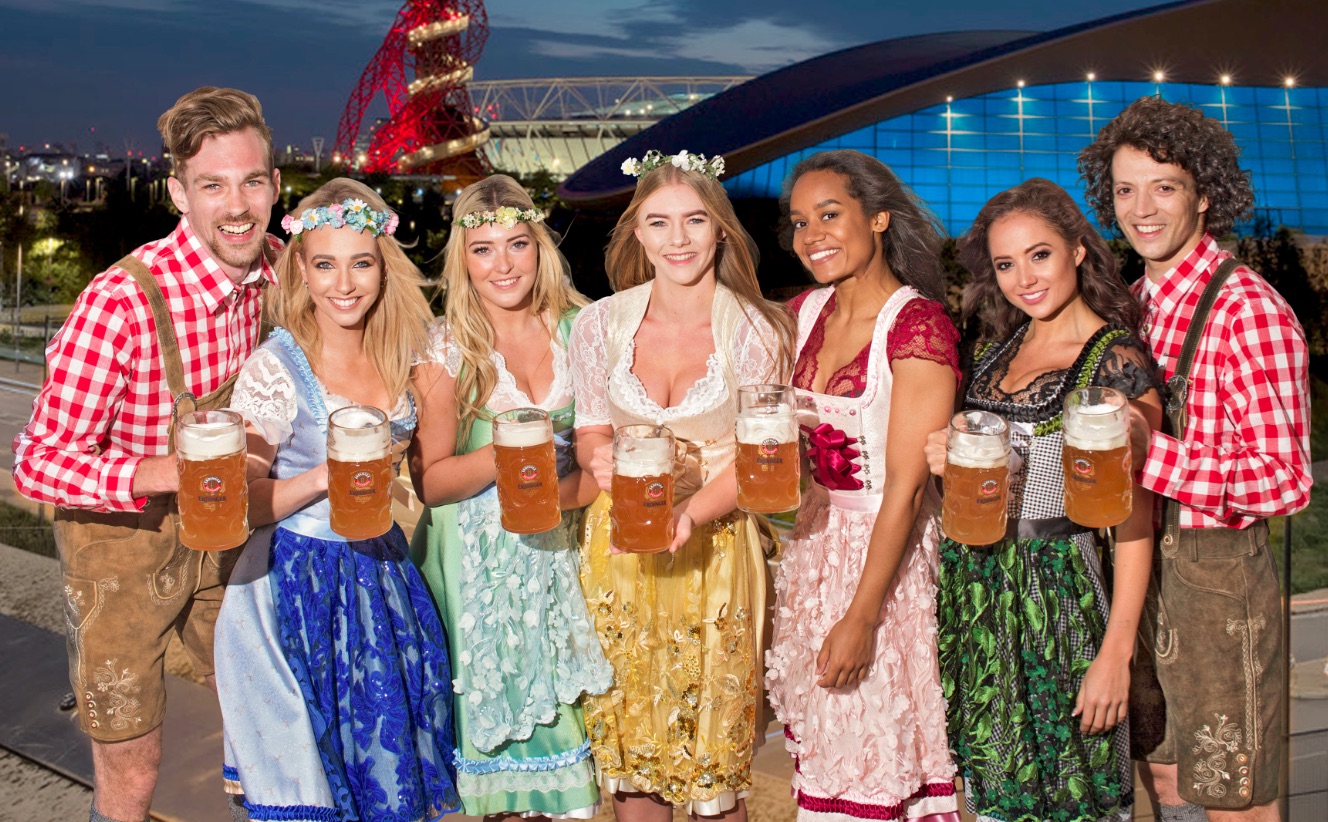 What: Following the huge success of their first year in 2017 (a casual 30,000 visitors), German brewer Erdinger are moving their Oktoberfest event to the former Olympics site and will create a traditional Bavarian beer ball for 5,000 people, taking place every Thursday, Friday, Saturday and Sunday until 28th October.

The Run-Down: Over 250,000 pints of premium “Erdinger Weissbier” (wheat beer) and smooth lager “Fischers Hell” will be shipped directly from the brewery in Bavaria to guarantee a real Oktoberfest feeling, and expert Bavarian waitresses dressed in traditional Dirndl dresses will be brought in specially for the event. Every day live entertainment from famous Oktoberfest bands flown in from Munich will be the major attraction in the main beer hall followed by modern pop acts and DJs that will run through the evening.