No weekend plans? Then it’s time to unleash your inner flâneur at Lumiere London. The FREE light festival taking place across the capital from 14 to 17 January, is sure to fight of those January blues with a myriad of colours dashed across the city. Lighting up central London and transforming landmarks and iconic streets in Mayfair, King’s Cross and the West End, Lumiere London is a weekend must see. Created by Artichoke, a creative company renowned for their extraordinary, large-scale events and invasions of public spaces, brings theatre and art to the streets – and to the masses once again in their latest realisation. 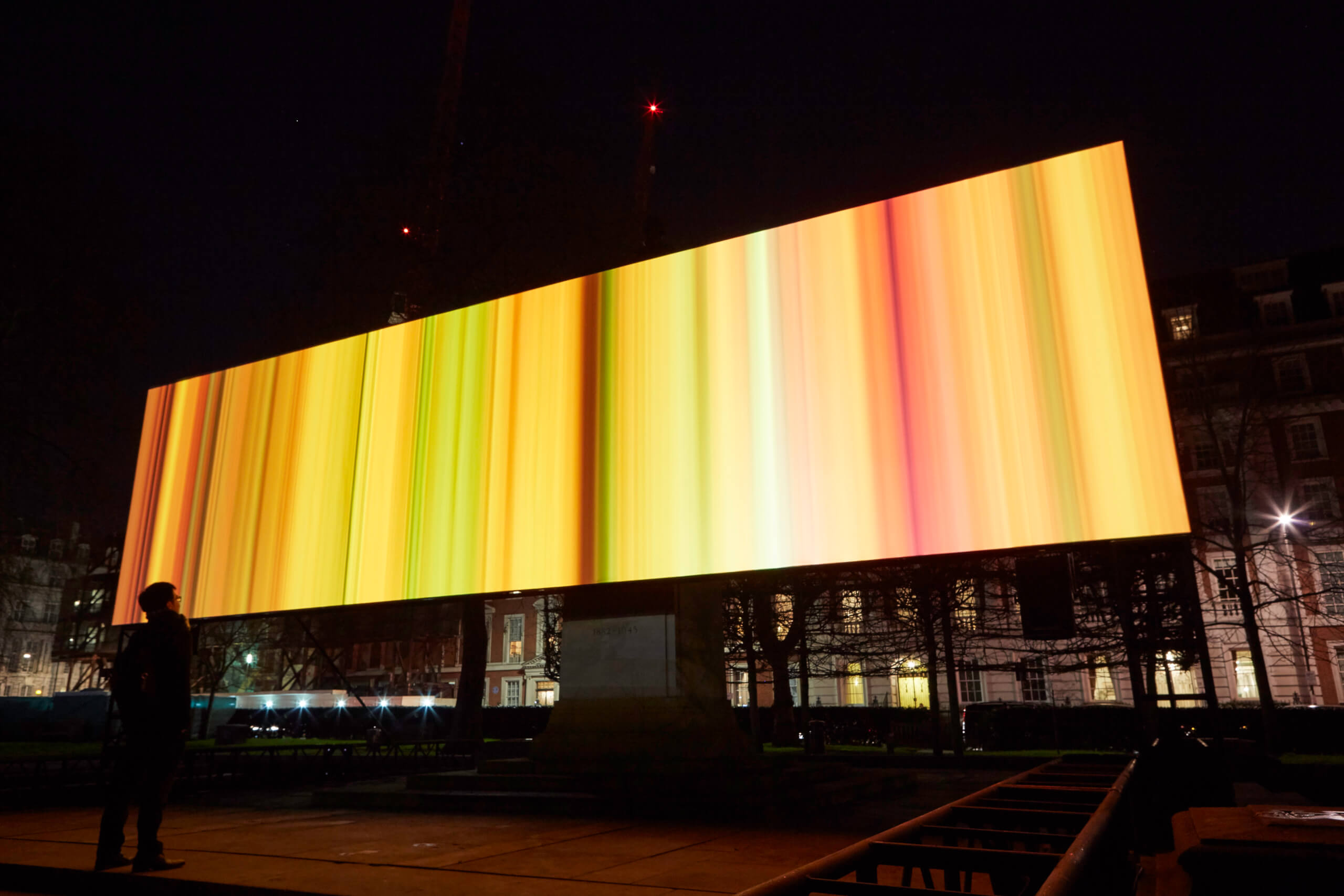 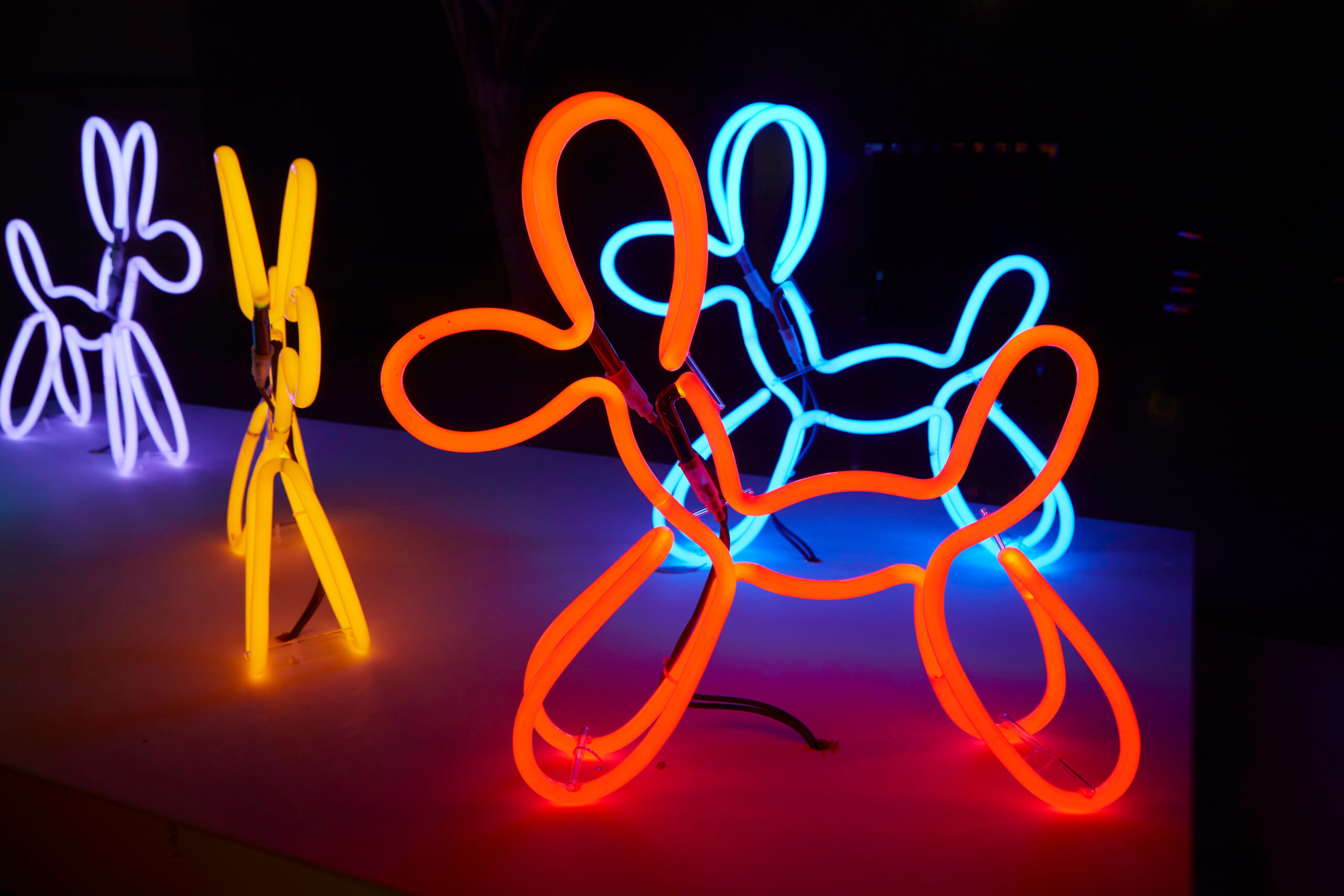 Every night from 6:30pm to 10:30pm you can expect large-scale video-mapped projections, interactive pieces and jaw-dropping installations displayed across the city. Download the map and suss your own route. Stumble upon aquariums aglow inside red telephone boxes, view luminescent ball gowns scattered across Kings Cross or catch a glimpse of 12 neon balloon dogs grouped together near Trafalgar Square. Regardless of your starting point, by far the best way to experience the festival is on foot.

Here our three must see artistic interventions from Lumiere London 2016: 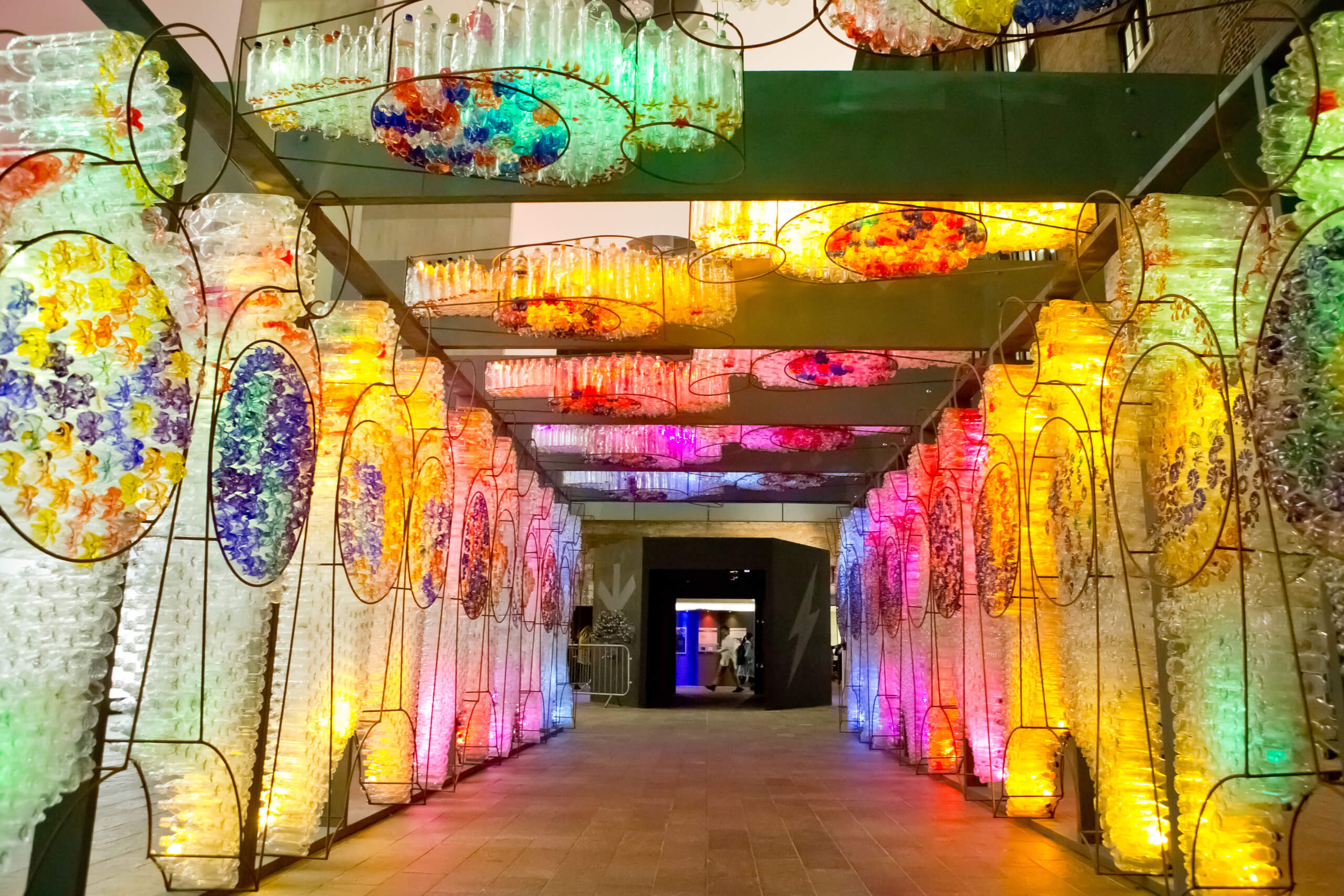 Litre of Light by Mick Stephenson

A collaboration between artist Mick Stephenson and Central St Martin’s students, is a pavilion filled with bottles designed during workshops with local school children. ‘This installation highlights how simple technology changes thousands of peoples lives across the world. How do you create a sustainable light bulb? By filling a plastic bottle with water, adding a drop of bleach and pushing it through a hole in the roof, you can refract as much sunlight through it as a 55-watt bulb.’ Go and see for yourself. 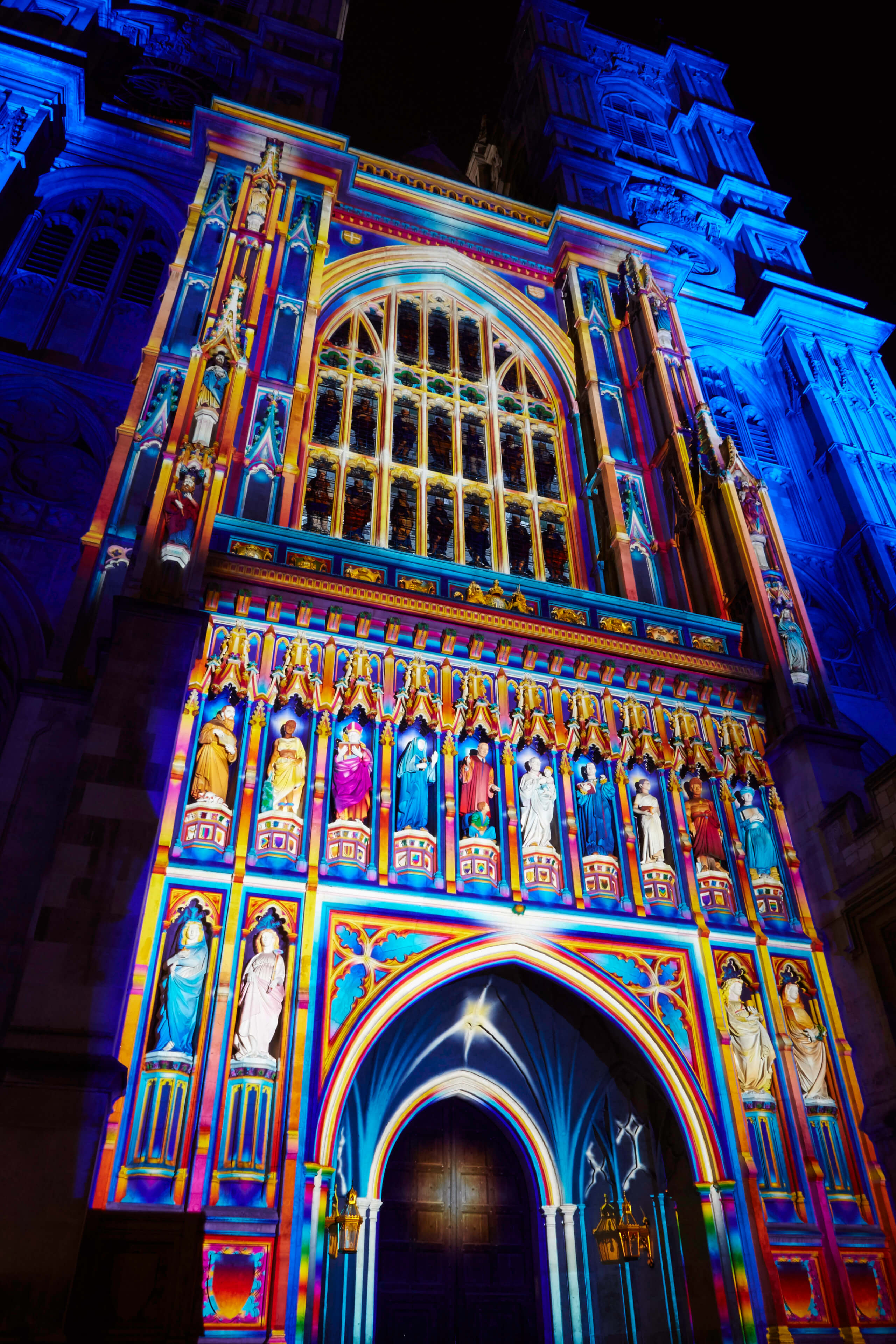 The Light of The Spirit by Patrice Warrener

The Light of the Spirit envelops the West Front of the capital’s beautiful Westminster Abbey in a kaleidoscope of colour and light. The projection highlights the architectural mastery of the building and audiences witness the glorious statuettes of 20th-century martyrs reimagined in multi-colour. 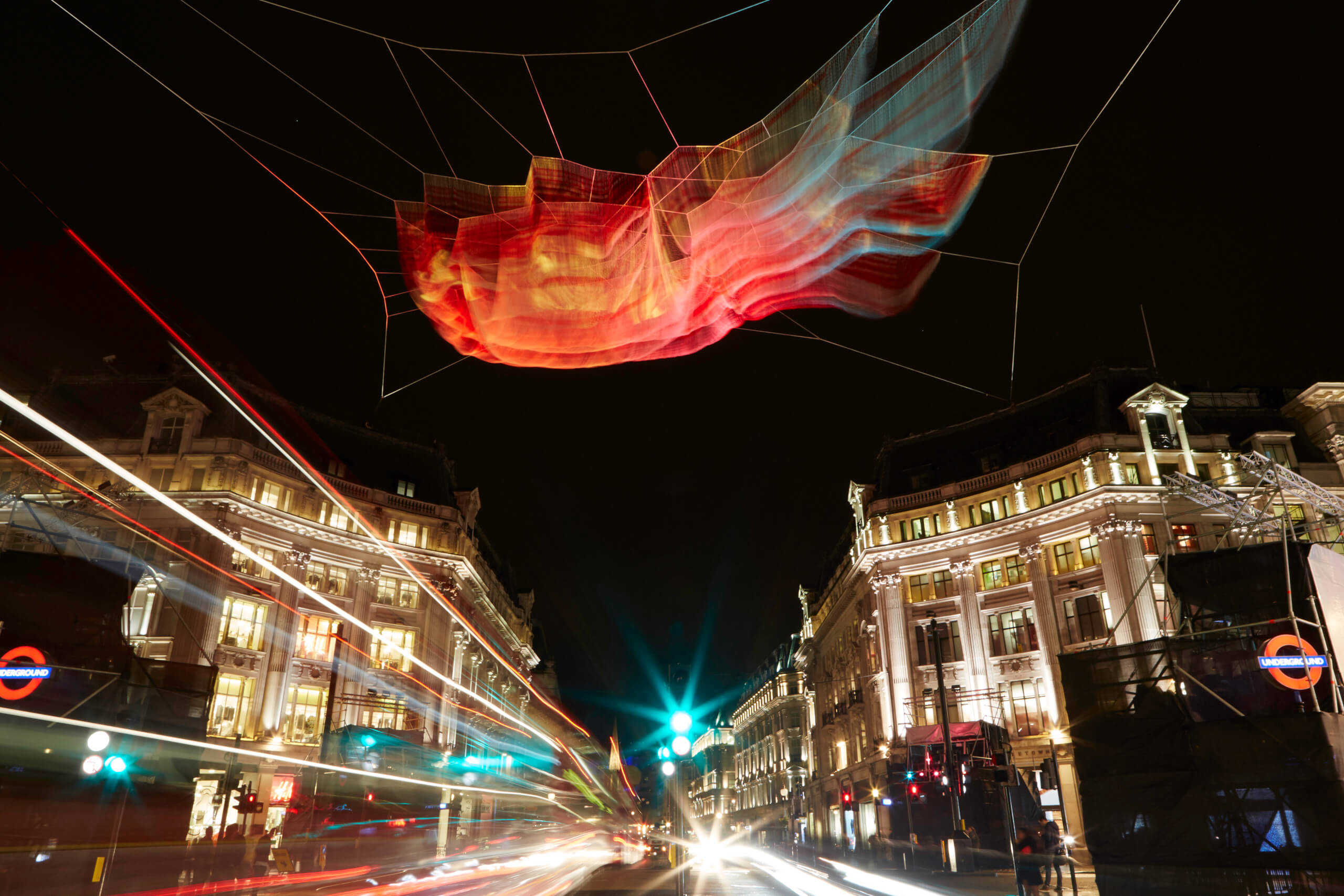 Inspired by fishing nets, this enormous net sculpture designed by Janet Echelman is named after one of the astonishing impacts of the Japanese earthquake and tsunami in 2011. ‘Such was the strength of the vibrations, the earthquake momentarily sped up the earth’s rotation and shortened that day by 1.8 microseconds. Using data from NASA, Studio Echelman turned this phenomenon into a 3D image, the basis of which was used to create the shape of this piece.’ Located in central London, the installation skirts Regent Street and Oxford Street, and viewers are invited to play with the sculpture using a specially created app that manipulates the light and patterns projected onto it.