Female brewers don’t often get the attention they deserve, so we thought it was about time that changed. To tie in with a recent collaboration on a brand-new Kettle Sour beer by We Are Beer, Heriot-Watt University and Pressure Drop Brewery, we chatted to 5 female brewers who are smashing it in the beer world currently. 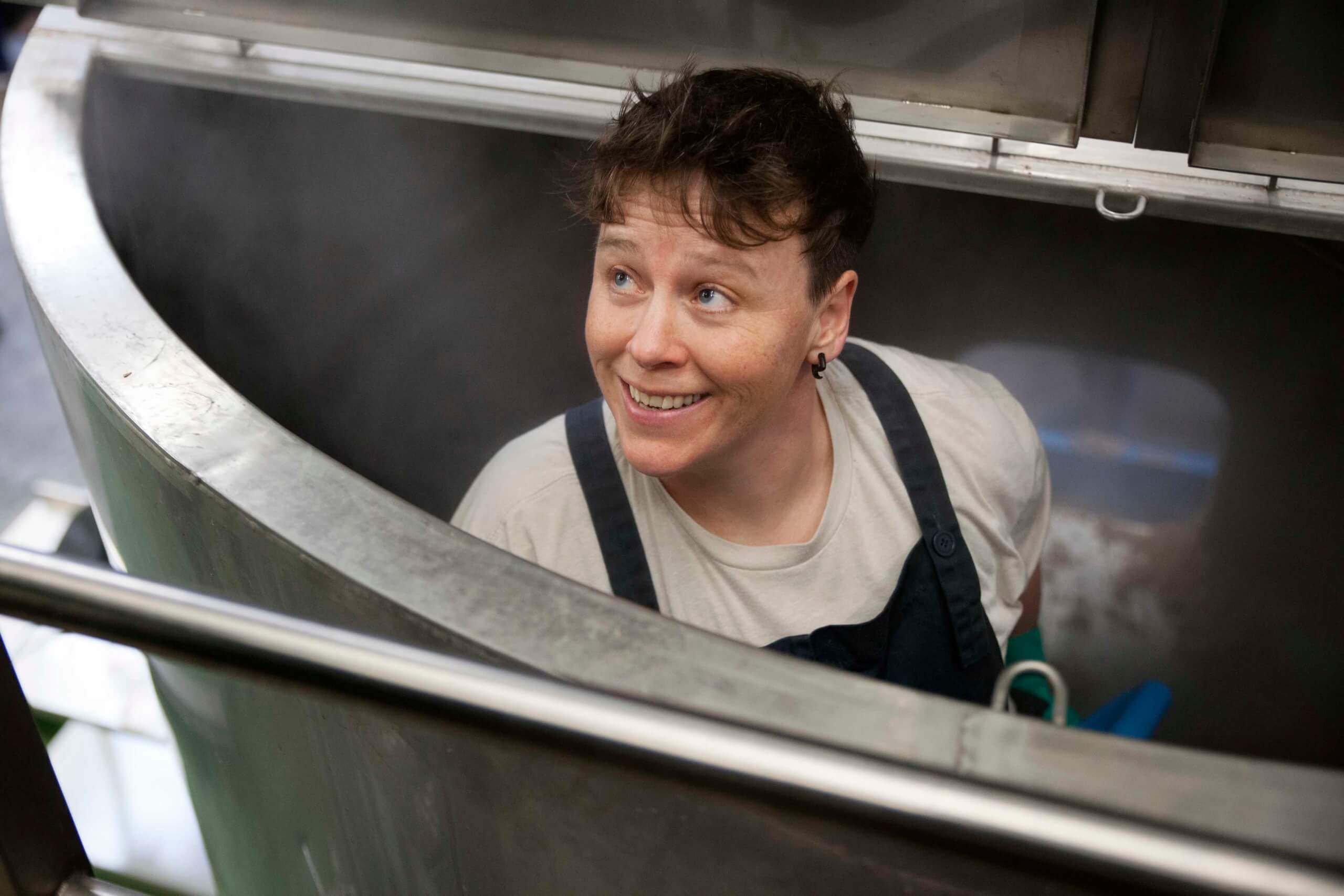 What did you do before you were a brewer?

I was a baker in a traditional, stone-hearth bakery cafe in my home town from the time I was a teenager. Roasted a bit of coffee there, too. I also did a few years in horticulture, growing tropical plants, orchids, cactus etc. I love the combination of hands-on work, science and technical expertise.

Tell us a little bit more about why you became a brewer and where you brew now?

Head Brewers design recipes, oversee production and control product quality. Brewing is a lovely thing as a mediation, a very physical job with ‘flow’ to the day (and something delicious to show for it at the end!), but as an organisation grows, a Head Brewer’s role becomes more managerial and operations-focused. Now, as a brewery owner, my job is much more strategic and entrepreneurial. Building a business from scratch is new to me, so I’m learning new skills every day!

Earth Station is a community-based brewery with a social mission, and we are still under construction on our new build, specially designed shed in and ex-industrial area of the Royal Docks. When it’s all finished, our mission is to provide training and employment to local people, particularly those from disadvantaged backgrounds and groups currently underrepresented in brewing.

Tell us about your experience of the We Are Beer collaboration brew day? What can festival goers expect from trying the new Kettle Sour beer?

It was a brilliant day with a lovely group of women! Everything went swimmingly, which with such a complicated process, is always a pleasant surprise! The brew day was really special as well for the opportunities it provided to the brewers and students for networking and getting to know each other.

This Kettle Sour beer will be a fragrant, tart, refreshing summer beverage with lots of complexity and interest. We brewed it to be a lighter, sessionable beer, so hopefully a nice change from some of the really big beers that often feature at festivals. 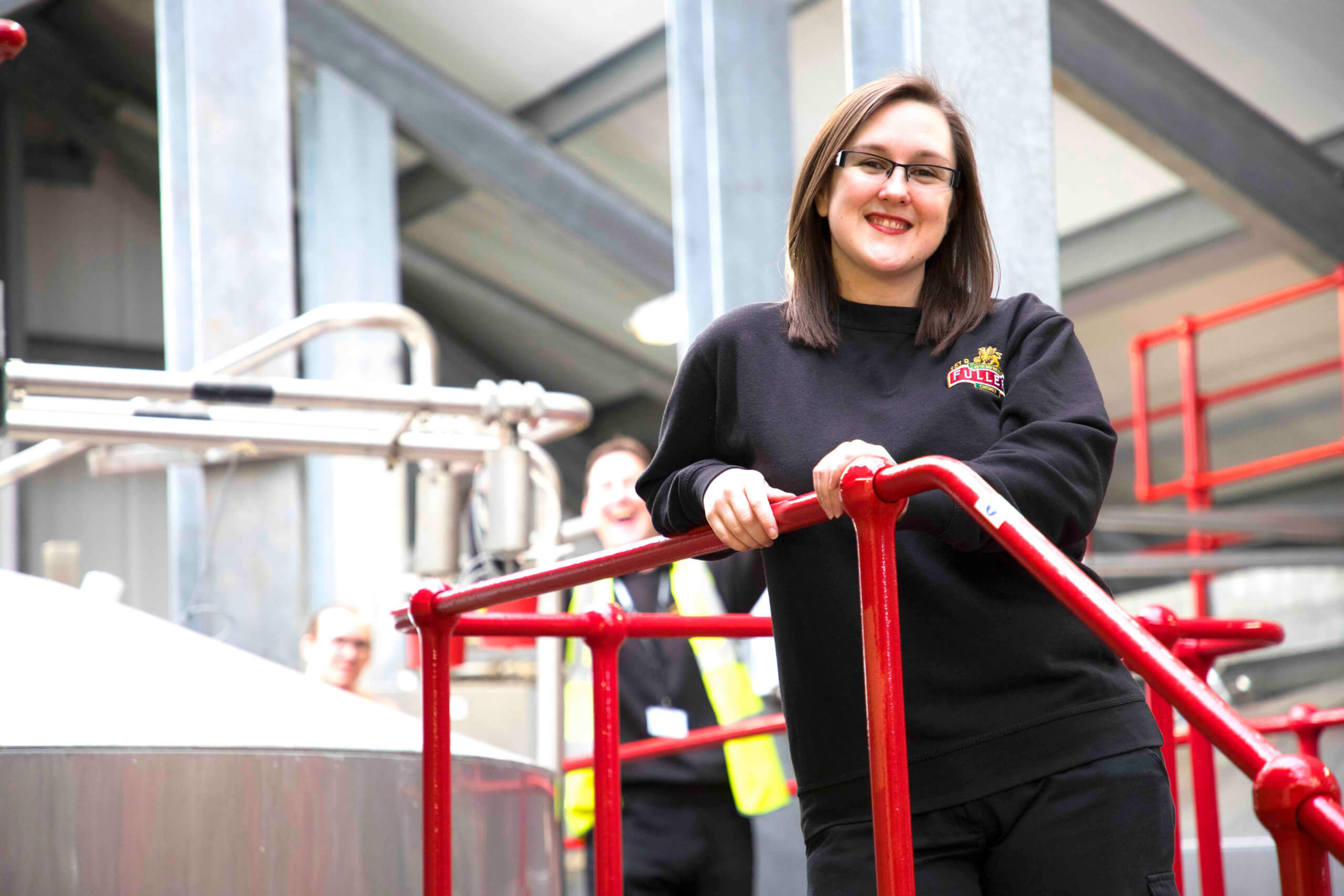 What did you do before your career in brewing?

I grew up in the North West of England, and first came to London to study at Imperial College. I studied Biochemistry and graduated in 2012 with a BSc (Hons).  During my time at uni I lived in Chiswick close to the Fuller’s Griffin Brewery, and it was following a brewery tour in my student days that I became really interested in the art of brewing as a science.

Why did you become a brewer? And can you explain your job title and responsibilities?

During my final year at Imperial I saw an advertisement for the Fuller’s grad scheme which really caught my eye.  Throughout the graduate scheme I spent time in many different departments, and this gave me a great overview of how the business ‘ticks’ – but I was still determined to join the Brewing Team.

After working as a Brewhouse Operative and Trainee Brewer, I’m now a Shift Brewer working with a great Brewhouse Team. Outside my regular duties, I’m lucky enough to be able to get involved at festivals (including being dressed in the Fuller’s ‘Bottle’ costume!) and I’ve also been involved in collaboration brews with other breweries which I’ve really enjoyed.

Fuller’s is a great place to work; I am fortunate to work with very experienced and respected Brewers like John Keeling and George Young, who are inspiring role models and mentors. They are very supportive and there is an ethos that ‘anything is possible’. I would never have believed when I joined that within five years I would be brewing a beer from conception to bottle.

I was also very proud to be involved with the ‘We are Beer’ collaboration recently at Pressure Drop Brewery celebrating Women in Brewing: past, present and future.

How did you find the We Are Beer collaboration brew day?

I was delighted to be asked to get involved in the We are Beer Brew Day. The idea came from the team at We are Beer who organise the London, Edinburgh and Bristol Craft Beer Festivals. They had noticed a marked increase in women attending their festivals and enjoying beer and wanted to celebrate women in brewing.

We were an all-female cast of brewers and women involved in the brewing industry, joined by lecturers and students from Heriot-Watt University. As more and more women arrived there was an air of infectious enthusiasm, and I felt really proud to be included.

It was great to chat to experienced Brewsters and the students from Heriot Watt who were really clued up and made me think that the future of women in brewing was in safe hands. We wanted to brew a Kettle Sour, but the actual recipe was decided on the day. There was lots of experimenting with botanicals, some of which I hadn’t even heard of, never mind adding them to beer.

Hopefully drinkers will be able to taste the love and care we put into brewing it and our enthusiasm will come bursting through! The only way to find out more will be to try it at one of the festivals. 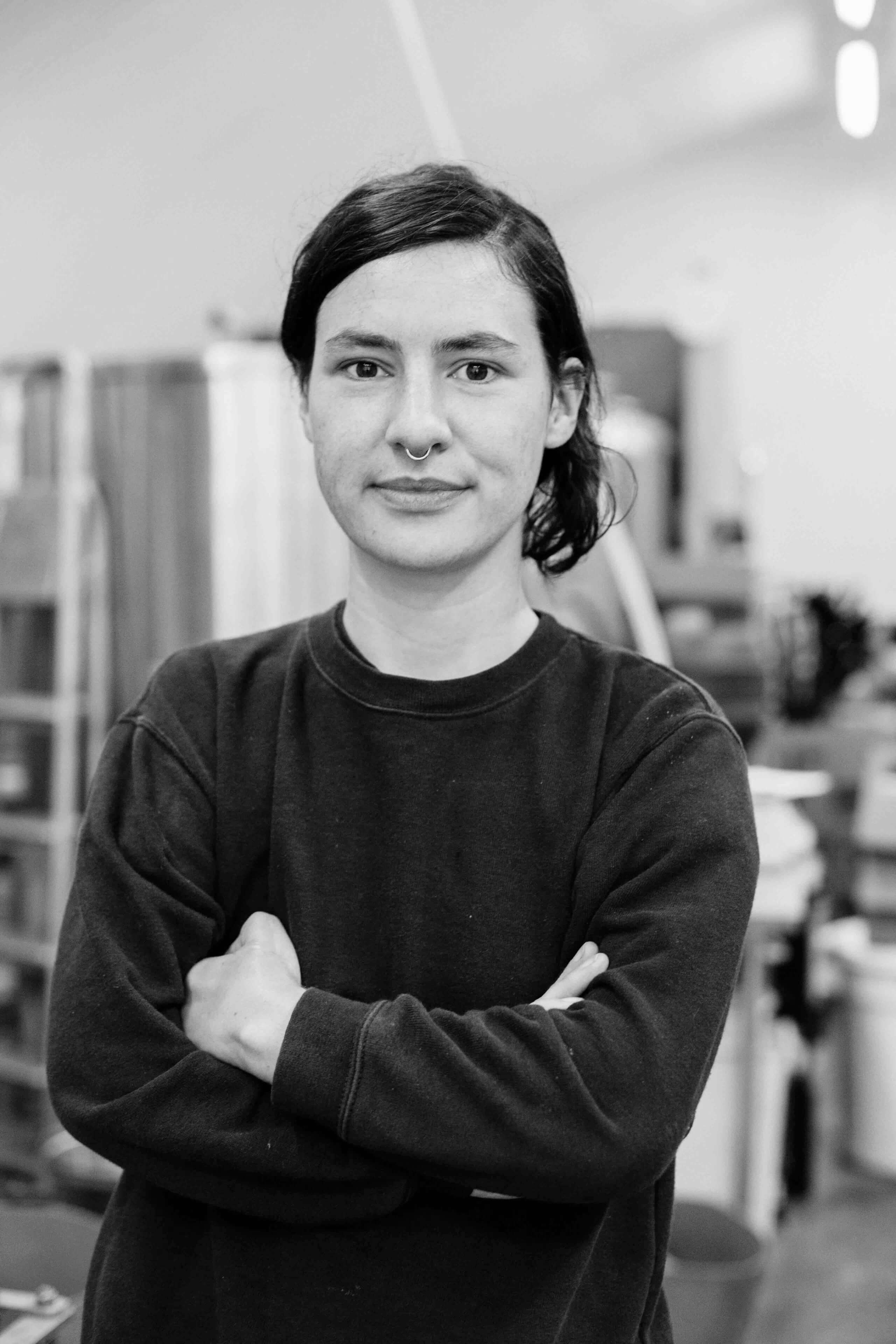 What drew you to a career in Brewing?

I made my brother a mash tun for his birthday because I thought he’d enjoy home brewing. By the time I’d finished researching and making it, I realised that I wanted to keep it.

We don’t really have job titles, but I’m a brewer at Pressure Drop. Everyone does a bit of everything here, but I mostly do wort production and bottling at the moment. I’m also Head of Barrel Aging and everything sour, but we haven’t got any barrels and don’t often make sours!

Pressure Drop are unique in giving me an opportunity to brew, I may not be the most likely candidate for the job, but they’ve allowed me to figure ways around a bunch of hindrances to working in beer with a disability.

Tell us about your experience of the We Are Beer collaboration brew day?

I’m not sure why, but I didn’t really know any women working in production before this collaboration, so it was pretty incredible to meet so many all at once.

It was a great atmosphere on the day – everyone was supportive and engaged, sharing a wealth of knowledge and experience. Working on new beers has got to be the best part of the job. For the new Kettle Sour beer, we aimed for a balanced flavour with a series of botanical and hop additions, complex enough to be interesting, but without losing some of the beautiful subtle flavours we’ve already got from the souring process and rhubarb. It will be delicious! 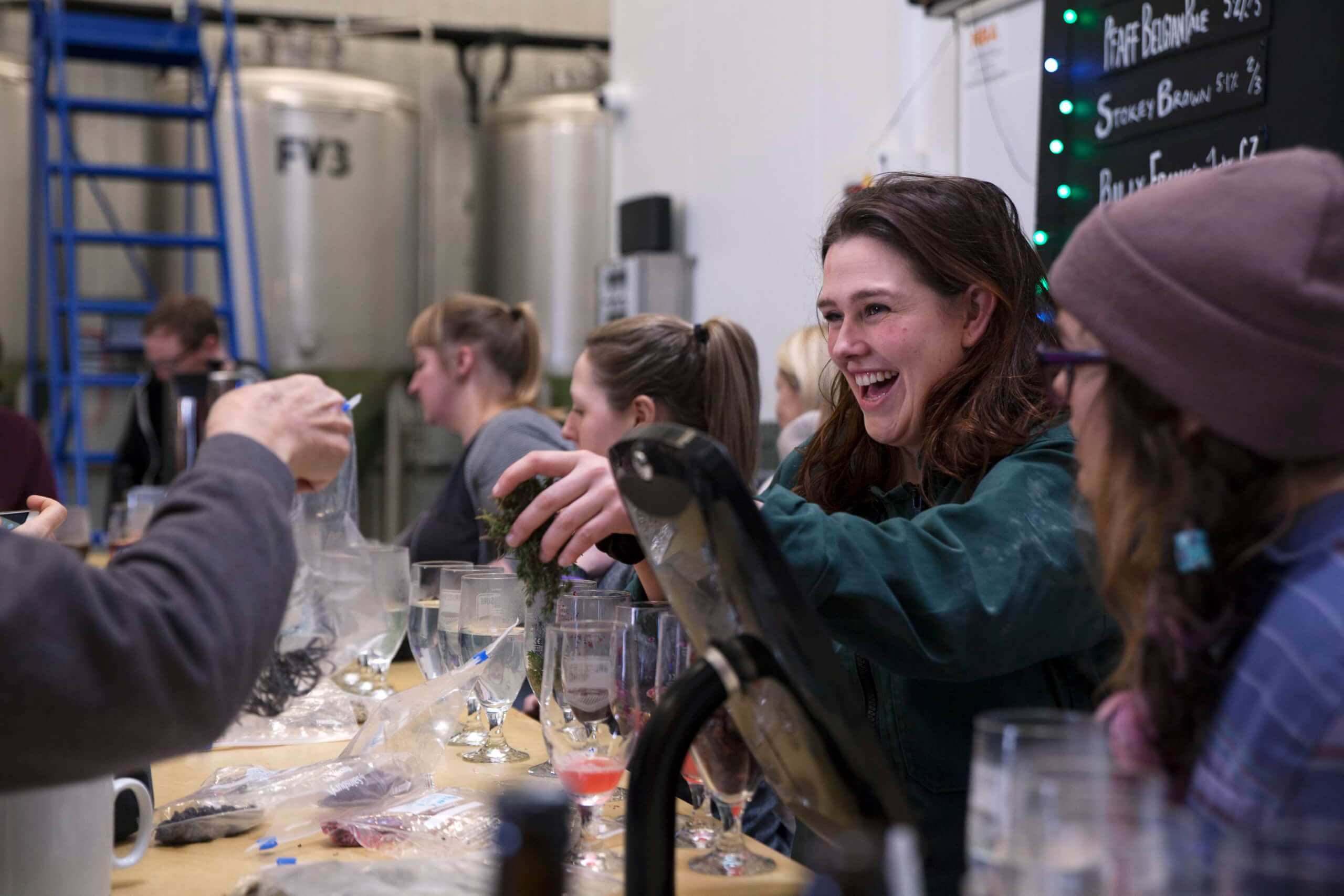 What did you do before you were a brewer?

I’ve been working in the alcohol industry for nearly five years, and brewing for the last 18 months. My previous job was on Islay, an island in the Scottish Inner Hebrides, where I was a tour guide at Bunnahabhain Distillery. Prior to this I worked at The Whisky Exchange Shop in London Bridge.

What made you decide to become a brewer, and what’s it like working at Wild Beer Co. Brewery?

For a long while I’ve been fascinated with how flavours are created through fermentation, distillation and ageing liquids in wood. I’m a Beer Nurse (a title I chose for myself).

I brew at The Wild Beer Co, located in rural Somerset south of Bristol, near Shepton Mallet. We have a focus on barrel-ageing beers and have done since first opening in 2013. We use a wide variety of additions, added during the boil and secondary fermentation – everything from pink peppercorns to lobsters.

Each morning involves taking the temperature, specific gravity and pH of each brew, before deciding which actions need to be taken that day. I look after the yeasts and make sure they are behaving. I also spend some of my time looking after our vast and growing library of barrels and foudres (large oak vessels, often used in the wine industry), and working with the barrels to create the perfect blends for bottling. To do this, we take samples from up to 50 barrels, and make ‘mini blends’, before deciding on the strongest contender and blending it on a larger scale of up to 6,000 litres.

How was attending the We Are Beer collaboration brew day? How did you go about sourcing the different components for the Kettle Sour beer?

The We Are Beer collaboration brew day was like nothing I have taken part in before. It was fantastic meeting other strong women who are nailing it right now in the brewing industry. I brought 28 different potential additions from the Wild Beer store down to the brew day with me, including oak moss, stevia and kombu, along with a sack of rose petals.

An initial sour kick both on the nose and palate is what you might naturally expect from a Kettle Sour, and our beer will deliver this, but with some extra touches.

We used rhubarb juice during the boil, and we will be going on to add rose petals, lemon thyme and hibiscus once the brew has finished fermenting. The rose petals will add a little perceived sweetness, the hibiscus some bitterness, and the lemon thyme a savoury note. Prepare your taste buds ready for a complex, fruity, well balanced sour! 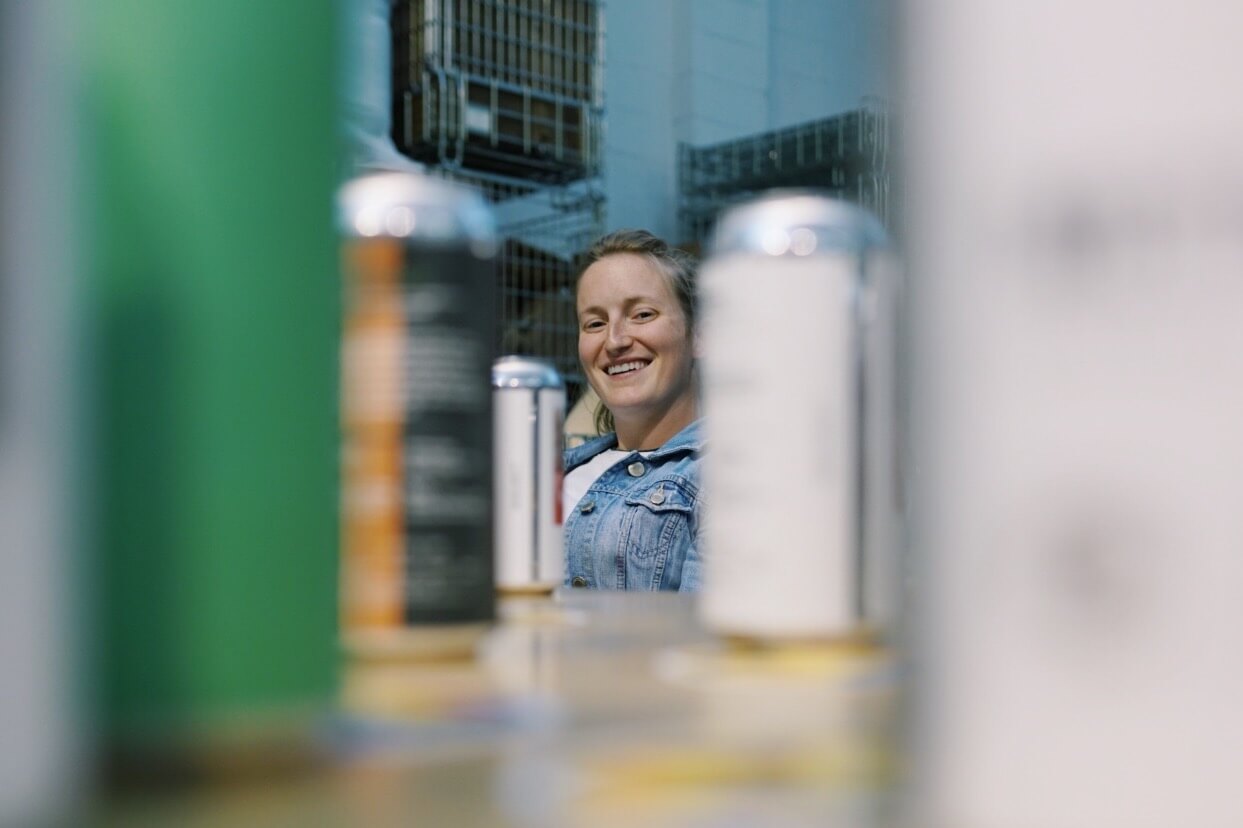 What did you do before you became a brewer?

My background is in Media Studies and Women’s studies, so brewing was actually quite a jump from what I initially studied. I decided that I wanted to be a brewer right after university, as I noticed that craft beer offered the exact kind of industry that I wanted to be a part of; it’s creative, supportive, political, social, and I would get to work with my hands.

Can you tell us a little more about your role at Cloudwater Brew Co?

I’m the Tank Manager at Cloudwater Brew Co – performing QA and lab work on all fermentations, along with yeast management, tank actions and running our tasting program and have been with the company for two and a half years. Before working at Cloudwater, I was a brewer’s assistant at Sawdust City in Canada. I have been so happy with my choice and thankful to be a part of this excellent community of brewers.

How was your experience at the We are Beer Brew Day?

It was wonderful to get to know so many of the women in the industry during the We Are Beer collaboration brew day at Pressure Drop. Many of the women I hadn’t met before, but knew lots about.

We all also had the fortune of meeting the next generation of female talent from Heriot-Watt. Katie and Jenn did most of the brewing, with each of us taking turns on the brewhouse to have a chat. They did a killer job!

Throughout the day the rest of us had a look at what botanicals, herbs and dried fruits we want to add. Being able to choose botanicals and additions was a smart way to get 30+ women involved without totally overwhelming the brewhouse. Everyone enjoyed the day and I am thoroughly looking forward to seeing each of them again soon.