Having graduated from incredibly popular street food and pub residencies to their first permanent Hackney Wick restaurant in 2016, entrepreneurs and London Wing Fest founders Richard Thacker and Andy Watts are at the top of the chicken wing game in the capital. With a second Randy’s Wing Bar on the horizon, and London’s appetite for white poultry growing, we caught up with the chaps to chat all things meat, cocktails and the humble wing:

Hey guys! You’re opening a second site in Aldgate – what can we expect from the new restaurant? 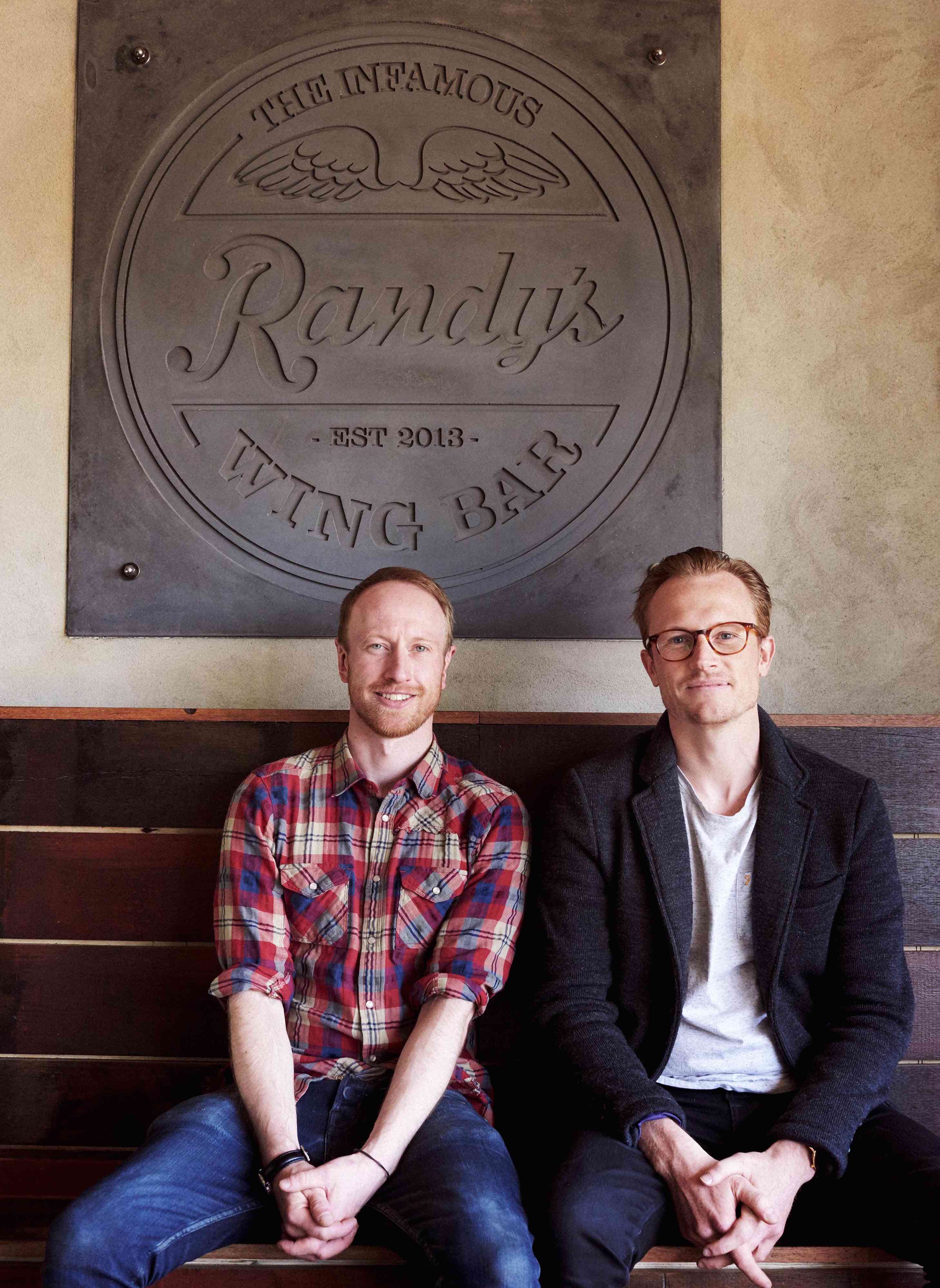 With the second site closer to the city we wanted to have a dynamic restaurant with a bustling lunch trade, which appeals to the busy city slickers who want a fast in and out service. In the evening we’ll up the ante with an extended menu (New Orleans grilled oysters to name a few) complete with our friendly, unique style of service. Our cocktails will be curated by Stu Bale who has helped such establishments as Hix, Punch Rooms and the Sanderson Hotel – expect great things. Rich and I like to describe the feel of our new Aldgate spot as Williamsburg, Soho city chic!

We’ve heard on the grapevine there’s going to be boneless wings… tell us more: 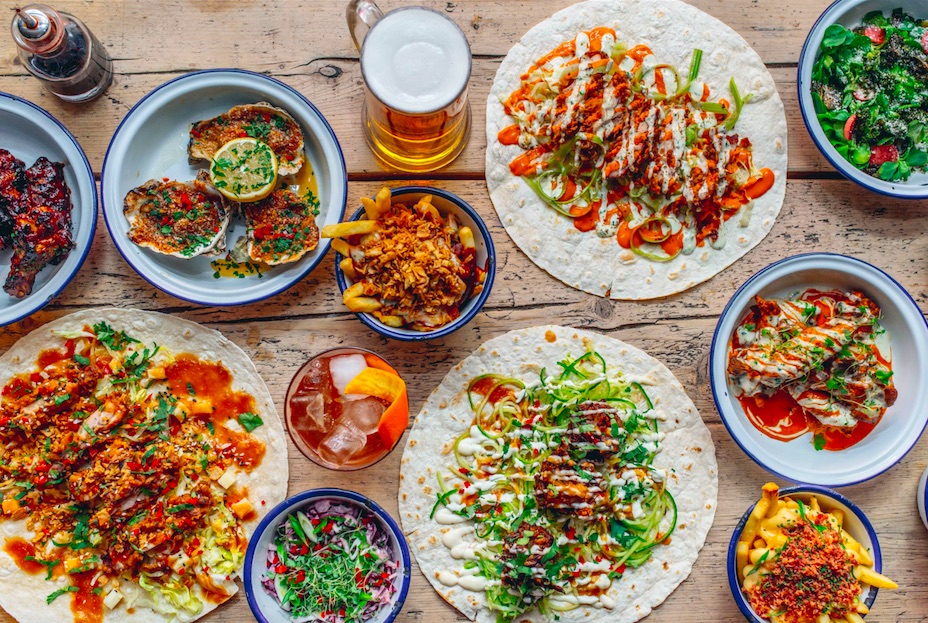 During lunch we decided to have a unique menu – boneless wings was a no brainer, and not to mention our chicken wraps – another new addition. The aim was simple: to allow customers to enjoy the wing experience without all the mess that comes along with eating them. So we’re now offering a boneless option; a succulent tender breast encased in a super crunchy coating, with a side of our amazing wing sauces – heaven in a bite!

Why do you think chicken wings have become so popular? 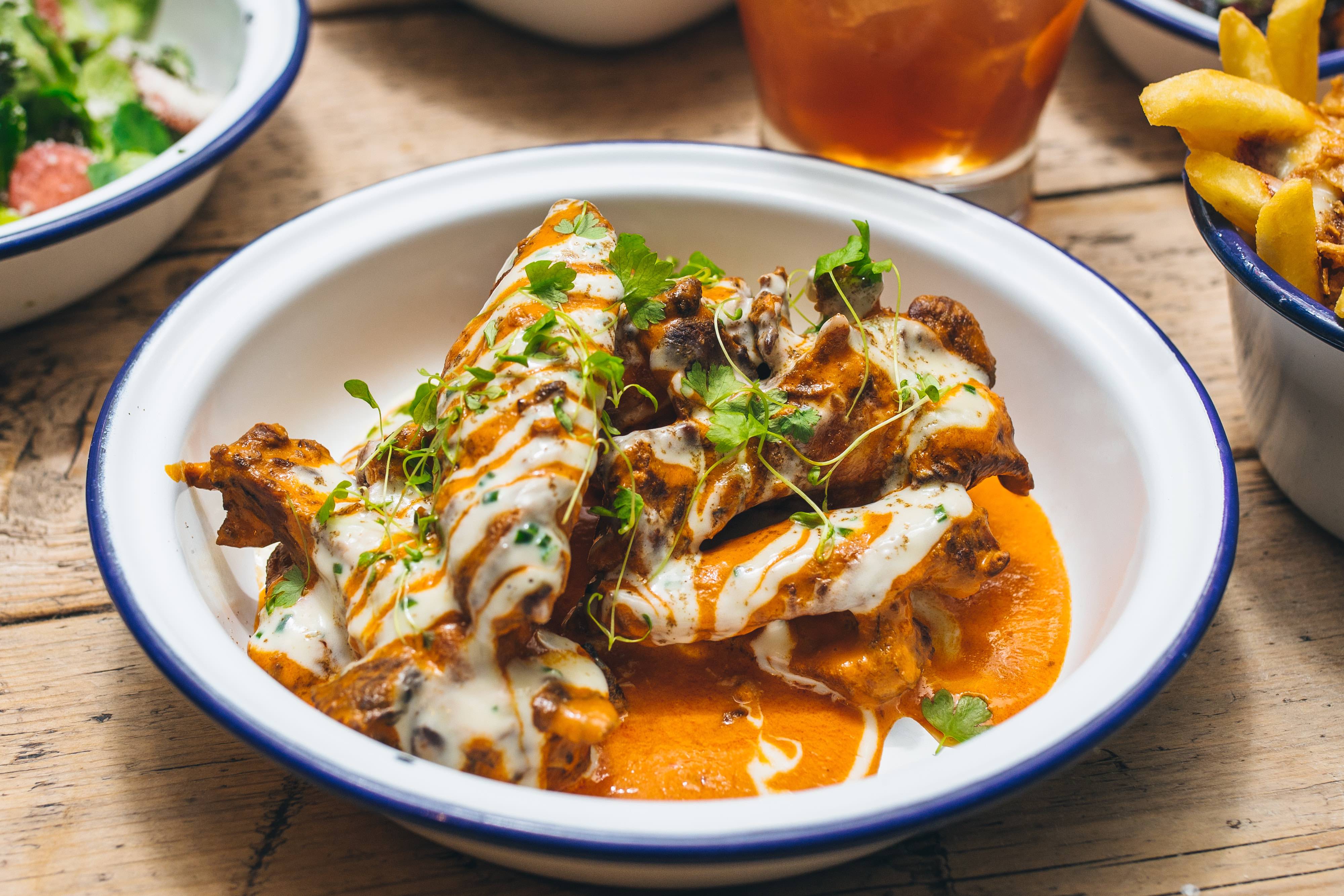 Rich and I saw what was happening in America and it was BIG! It wouldn’t be long till’ this tasty delight would hit the British shores, we knew it was always going to be a hit with the general public as it appealed to a mass market. Wings are an amazing cut of meat; essentially it’s an offcut with a great depth of flavour as you’re cooking on the bone. You can do just about anything with a wing, I’ve seen all sorts of weird stuff, some things which work and some which certainly haven’t. There was a peanut butter and jelly wing. I kid you not…

If you could only eat one type of wing for the rest of your life (Buffalo, Korean, hot) – what would it be?

In my opinion, the foundation that made the chicken wing into what it is today was built on buffalo sauce! It’s made with a combination of vinegar-based cayenne pepper hot sauce and traditionally melted butter prior to serving. At Randy’s we have our own version, and if I had my groundhog day it would be with our sauce smothered all over a wing with a side of blue cheese dip.

You guys are behind Wing Fest – what’s in store for the 2018 event? 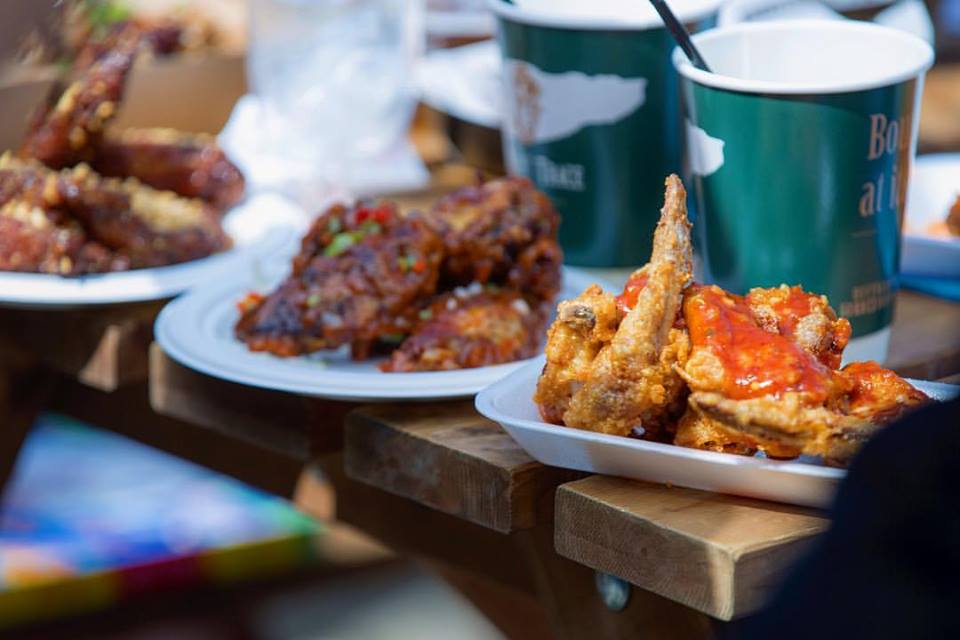 From the huge success of last year’s event, we’ve been working hard to make this year even bigger and better with more wing operators from all over the UK. This year, Wing Fest will take place in the Queen Elizabeth Olympic Park and there will be 10,000 tickets on sale. You can expect to see Blues acts curated by Kansas Smitty’s. We’ll have new hosts, the formidable lava wing challenge and the prize for the best Buffalo and Wild Wing voted for by ticket holders. We’re also excited to be refining our London Wing Fest App which will be interactive on the day. Rich and I are also about sustainability and promoting the reduction of plastic wastage at this year’s event. Tickets go on sale in April, keep your ears pinned to the ground.

What’s the secret to making the best wings in town? 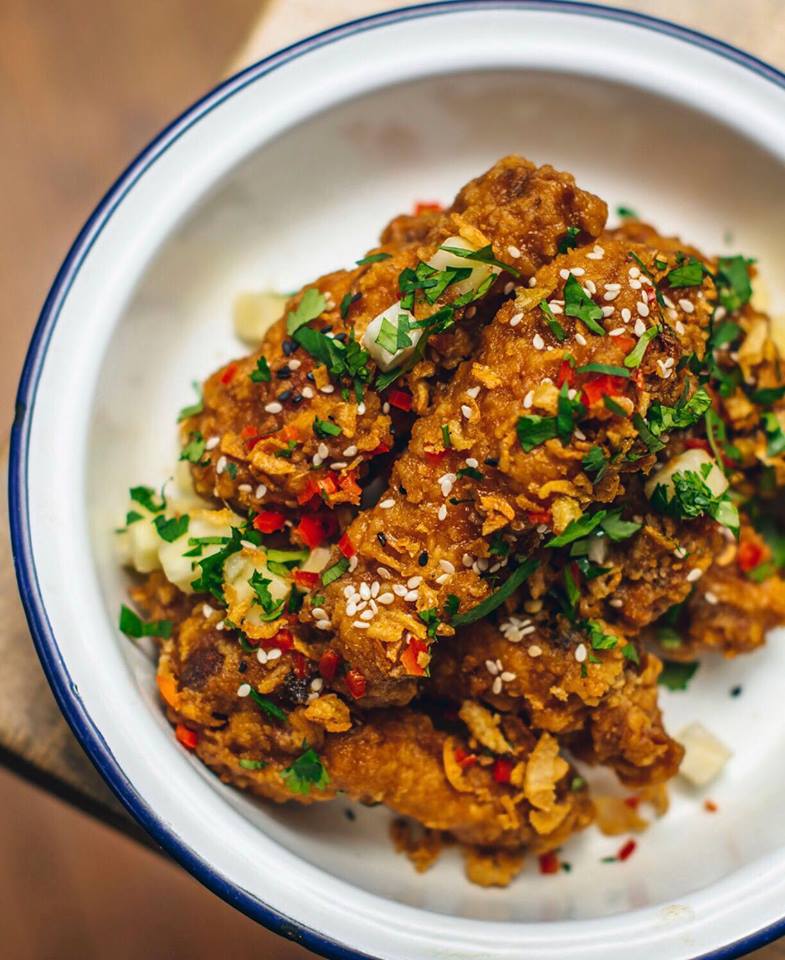 Passion and dedication is the key to making the humble wing a culinary masterpiece. Rich and I travelled to North America (Buffalo) and the south to really hone our cooking techniques and to learn from the best. Any die hard wing fan will tell you that the perfect wing comprises of two main elements:

At Randy’s our concept is all about fusion flavours from all over the world. For instance, our Casablanca wings are marinated for 24hrs in Moroccan spices and then lightly baked. We then toss the wings in a harissa glaze and grill on an open flame, resulting in a mouth-watering caramelised glaze and a smoky undertone, we then serve with a light mint dressing, sumac onions, and a dusting of pomegranates and coriander to finish.

You’re launching a new cocktail menu at the Aldgate branch – who came up with the new tipples?

We’re super excited to be working with our friend/world renowned mixologist Stu Bale, owner of Crucible. He has helped redefine the cocktail world as we know it. Our cocktail offering will have a cheeky wink to the chicken wing, we’re using a recipe from Ryan (White Lyan) which will use house vodka and chicken bones dissolved in an acid-and-mineral bath, hence ‘Bone Dry Martini’. We’ll be serving all of our drinks without plastic straws, just like we do in Hackney Wick.

Apart from Randy’s, where do you head to get your wing fix? 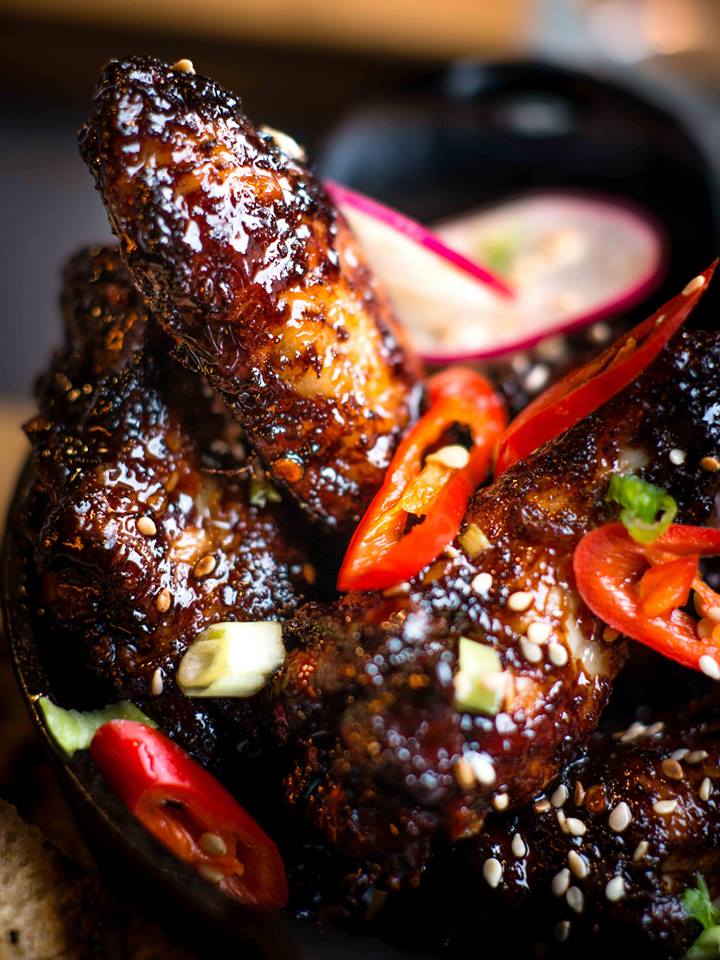 This is a tough one; we make it our business to know what’s new on the wing scene, so we eat a LOT of wings weekly, if not daily. Favourites include Wingmans who have an insane oriental wing, the Orange Buffalo boys truck – their homemade Buffalo sauce is some of the best in London, and the HotBox who offer incredible smoked wings.

It would have to be competing in the Buffalo Wing Fest in North America. We were the first international competitors in history to take part. To give you an idea of the size and scale, 80,000 Wing mad Americans descend each year, 40 tonnes of wings are consumed over two days and we served 6,000 wings between three of us. The numbers were insane, and this was filmed for a 4 part documentary on Jamie’s Food Tube (Winging It).

Favourite place to grab a coffee is: Shoreditch Grind