Life / Commentary / Scarlett Says: You Don’t Have to Be Skinny to Have Good Sex

Scarlett Says: You Don’t Have to Be Skinny to Have Good SexBy Scarlett de Winter

Somewhere around the second bottle of wine, sitting outside in our garden last week, my housemate posed a question.  “Does it bother you that Jack has such skinny legs?”

I was more than a little thrown by the change of topic from which member of the Orange Is The New Black cast would you be (Piper, sadly) to Jack’s BMI.

“Not really… why would it?”

“Well, it’s just that he’s so leggy, and slim. Don’t you ever worry that he makes you look fat during sex. Like, your legs next to each other. I’m not saying you’re fat- but – they’re just so skinny.” 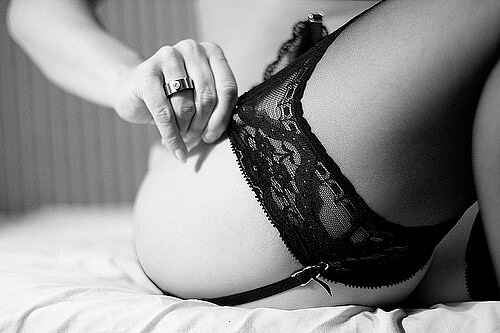 But the more I thought about it the more I realised that I have friends who don’t fuck with the lights on, who won’t take their bras off, who don’t like it from behind because it makes their tummy sag. And half way through feeling super smug about how totally well-adjusted I am, I remembered the time that Jack ran his hand over my lower stomach whilst fucking me from behind. And I remembered how I felt sick, and wanted to cry, and how one simple touch to the part of me that I most dislike could total derail what had otherwise been an utterly epic shag. It turns out, I don’t just have friends who are neurotic about how they look during sex. I’m neurotic about how I look during sex.

Yet we’re missing the biggest, most obvious point of all here. By the time you get upstairs with someone, tangle in each other’s limbs, bite each other’s lips and touch each other’s faces (or stumble off the night bus playing Lady and the Tramp with a kebab) that person had already decided that they’re attracted to you. They want to have sex with you. They actively want to undress you and touch you, and be with you. They’ve made this choice because they find you attractive.

In the history of the world, has anyone ever had someone go home with them, undress them and then stand back, appraise their slight cellulite or gentle leg stubble and announced “Actually, on further consideration, I’m okay. Bye.”

No. This has never happened. And this has never happened because literally the only person who is expecting you to look like Miranda Kerr when you get naked is you.  And not looking like her is not going to put someone off. Refusing to leave the lights on, take your clothes off or go on top because you think your boobs are lopsided, on the other hand? Might just ruin both of your fun.

There aren’t many essentials for having mind blowing sex. Knowing your own body, being able to talk about it with your partner, consent and feeling comfortable are pretty much the only essentials. But you’re never going to have insane, hair pulling, chest swelling, sweaty intoxicating sex if you’re fidgeting to find the best angle for a flat stomach. I’m a size fourteen. I know that if I’ve both my ankles around Jack’s shoulders, my tummy is going to crease and it’s not going to look like a Calvin Klein advert. I also know that he’s going to be hitting my g-spot and still have a spare arm to pull my hair. So then it comes down to looking amazing, versus feeling amazing.  And realistically, if I cared about having a flat stomach more than I cared about enjoying myself then I’d have laid off the Pinot Grigio a long time ago.