Life / Entrepreneurs / About Time You Met: Will Sorrell, Founder of Clarendon Games

About Time You Met: Will Sorrell, Founder of Clarendon GamesBy Alicia Grimshaw

Will Sorrell is the creator and founder of Clarendon Games, a company specialising in board games that are fun,inclusive and fast-paced. To date, Clarendon has launched 12 board games and card titles, which are available to purchase at Fortnum and Mason, John Lewis and Selfridges. We chatted to Will about changing careers, the popularity of board games and his latest game, Poppycock!:

You left your full time career in order to set up Clarendon Games – what and when was the lightbulb moment? 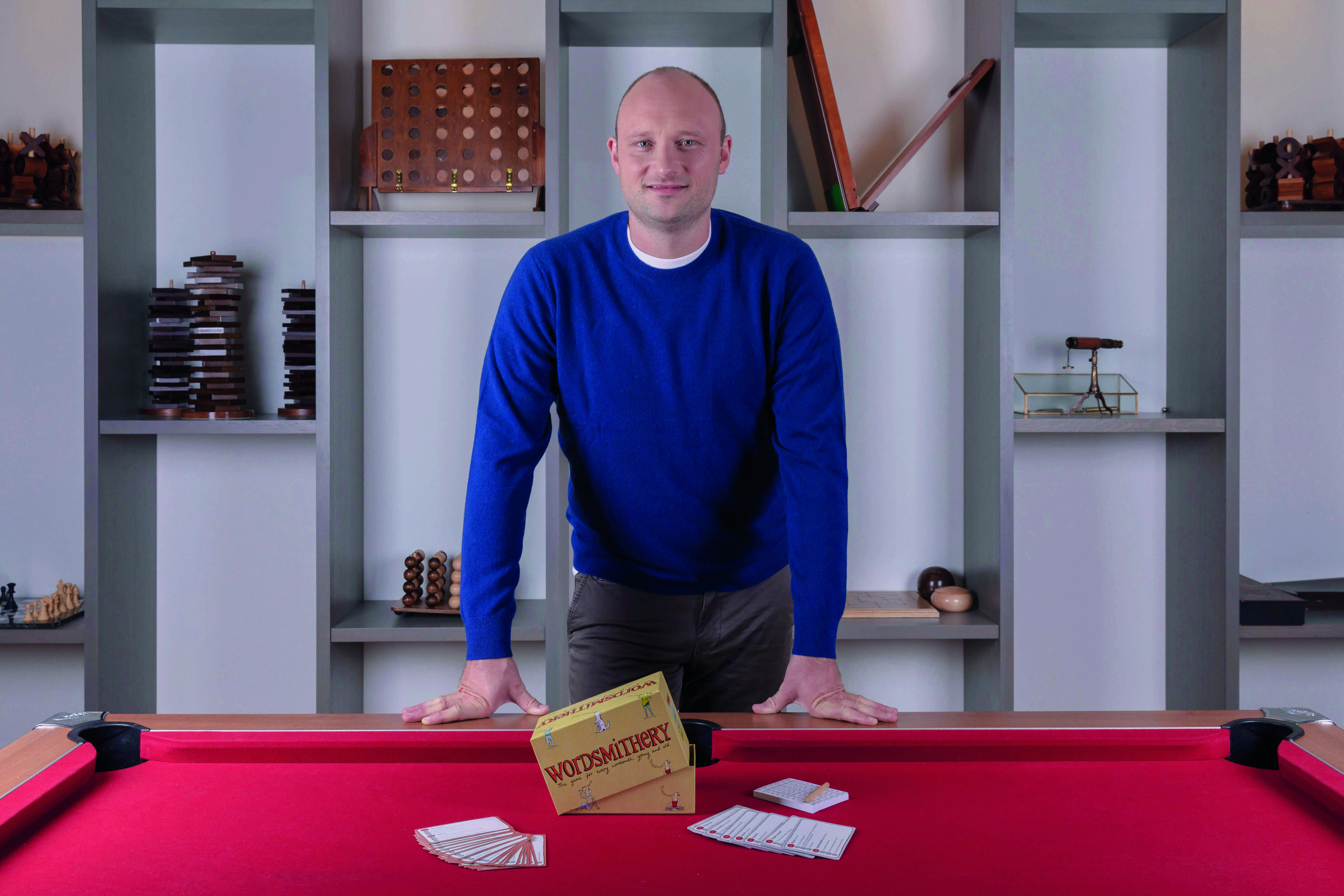 In 2009, I was working full-time in product development at a skincare company. I’d been working for consumer products distribution or publishing companies my whole career up until that point. I felt I had enough experience to set up my own business, but I had to find a product to make and sell. I’d always loved board games, and I was confident that people would still be interested in them even in the age of the internet, computer games and game apps. I developed my first game in my spare time; I made a prototype out of mdf, bits of wood and card and played around with it whenever I could. I used to take it in to the office with me every day and work on it on my lunch breaks. And then went part-time in 2011, before quitting my job and launching Clarendon Games in 2012.

What was it that first attracted you to board games?

I love how board games bring people together and make them laugh. They’re such fun and a bit of escapism, since they transport you away from everyday life. No matter if you’re playing with family, friends or people you’ve just met, playing a board game is a great way to socialise. What’s more, board games are a great way to get to know someone, since the way you play them reveals the bare bones of your character.

What kind of board games do you create? 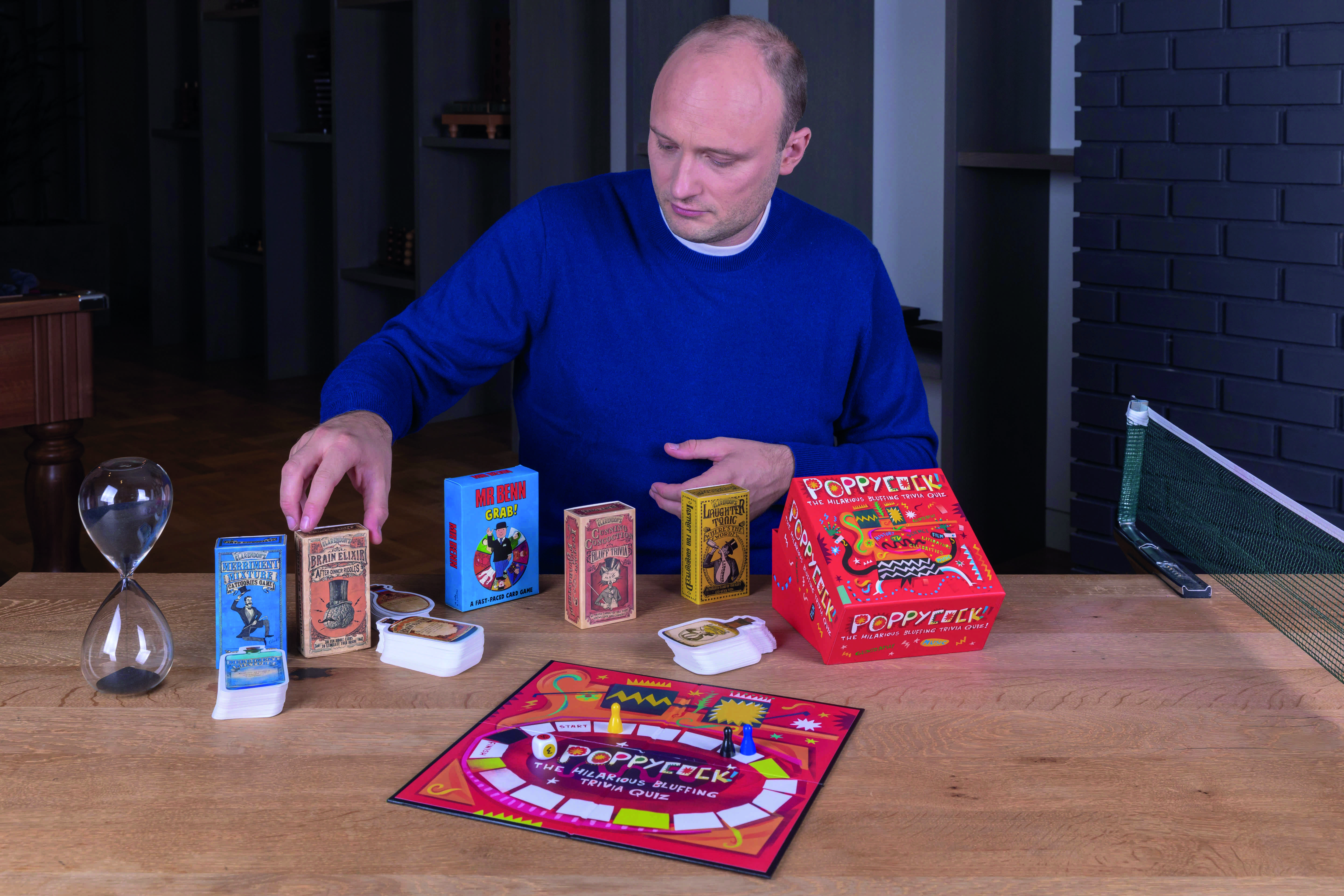 The kind of games I like to create are fun, accessible for all ages and make you laugh out loud. I feel some of the classic board games take far too long to play and are a bit fiddly. I like games that are easy to learn, don’t take too long to play and are hassle-free to play. Furthermore, it’s much more fun when everyone playing not only gets to play until the end, but also has a chance of winning (not just the brainiest person). My games Wordsmithery, Poppycock! and the Miracle Medicine range of games are examples of that.

With some of the classic games like Monopoly, luck determines the winner to a great extent. For example, in Monopoly, whoever is lucky enough to land on the best properties in the first two circuits of the board will almost inevitably win four hours later. I prefer to create games where the winner wins because they’ve played better than everybody else.

The most important thing about a game is that it’s fun, but I like to include an educational element in the game if I can. Wordsmithery, for instance, is a really fun game that helps you learn words that everybody pretends to understand when they don’t.

What challenges did you first face when setting up the business?

Finding a good manufacturer is a challenging and time consuming exercise. Our games are made in China, so I visited the country to do my research. You have to find a manufacturer who can produce a consistently top-quality product on time and at a good price, and who meets environmental, ethical and product safety regulatory standards.

Once you’ve finalised your design and set up your supply chain, initially retailers are understandably cautious and only want to trial a new product from a new company in small quantities. This represents a risk because manufacturers’ minimum order quantities are significantly higher than the size of the orders retailers are placing. This means you have to make a lot more stock than you need, and you have no idea if you’re going to be able to sell it or not.

Other challenges include raising the funds to pay for operations and working capital, and branding your product in a way that’s compelling enough to persuade customers to part with their hard-earned cash.

How did you get retailers to believe in your product when you first started out? 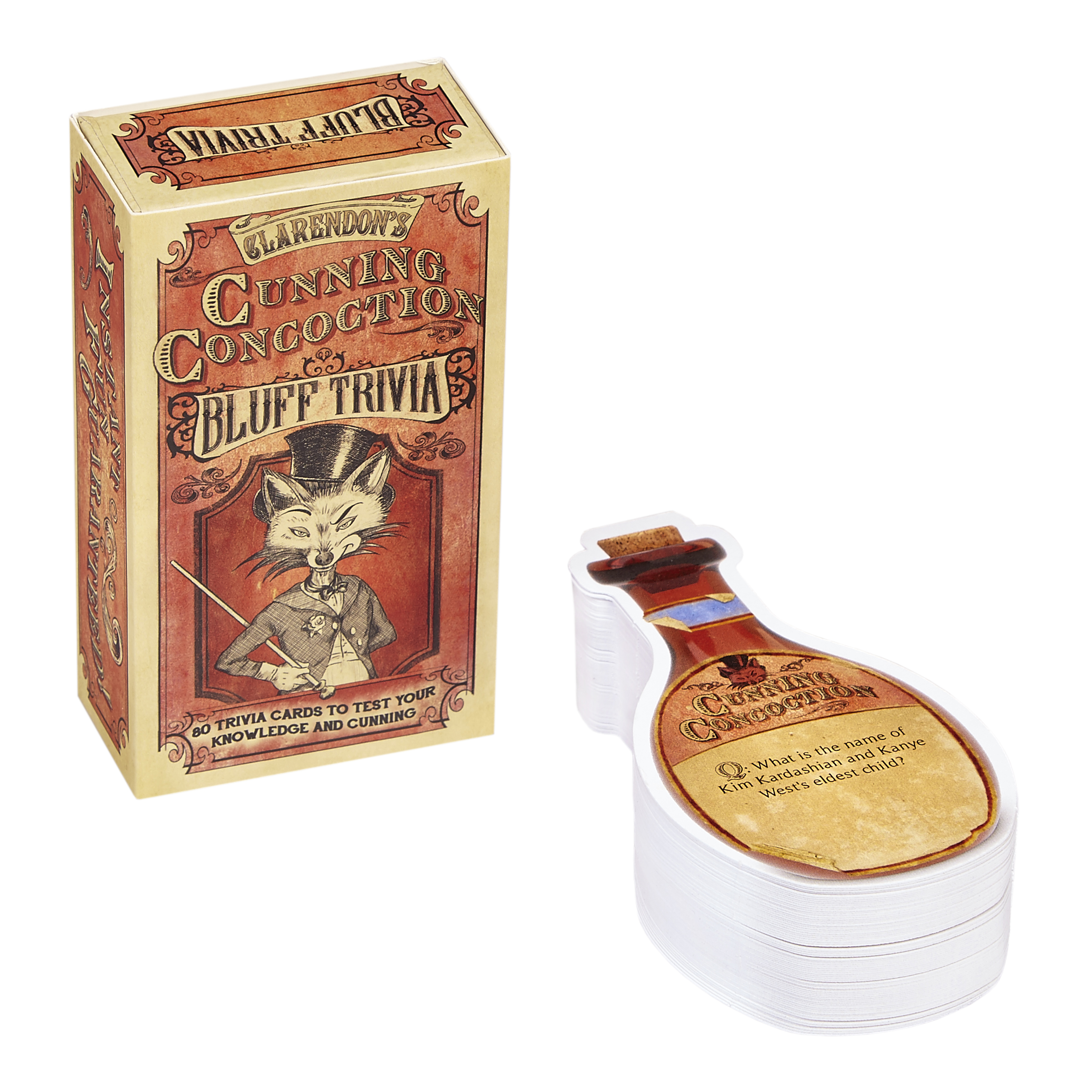 When you’re a new company with a new product and starting from scratch, it’s very hard to persuade retailers that what you’ve got is incredible.

Initially I made prototypes and then cold-called stores to pitch my games to them. With some of my stockists it took several years before they took my games. I was very lucky because, Fortnum & Mason was our first stockist. I literally called them up, met with them a week later – and then we were on the shop floor a week after that. We had this massive show of support from a major retailer from the start, which definitely helped our credibility. Since then we’ve got into many more retailers, including Debenhams, Waterstones, Foyles and John Lewis, who we now supply with seven titles.

Why do you think there’s been a revival of board games in recent times?

Computer games, smart phones and the internet of course hit the board game industry pretty hard. However, as technology has become even more integral to our lives, there has been a bit of a backlash against it. People are tired of being stuck in front of a computer all day, and it can be quite a solitary experience and tech can be addictive in an unhealthy way. Board games are a great antidote to that. It’s great to play a board game and interact directly with people, away from a computer or smartphone screen, and have a real experience rather than a virtual one. What’s more, people are beginning to realise that app games are too simplistic, and they stop being fun after a while.

Statistics show that people are drinking less, so playing a board game is a good alternative to going to a pub or bar all evening. What’s more, since the cost of living is increasing and people are feeling the pinch, they’re a cheaper alternative to other forms of entertainment. Our least expensive games are the Miracle Medicines games, which are £6.00, and most expensive is Poppycock!, which costs £25, about the price of a round in the pub!

Do you think in five years time board games will still be as popular?

People have been getting together and playing games since time immemorial. There’s certainly something primeval and instinctive about it, so I hope in five years’ time they will still be as popular. In fact, I think they’ll become even more popular than they are now. As more of our lives are being led online and we become more dependent on technology, I feel the desire to take a break from screens and the online world to spend time directly with other people will increase.

For children, playing board games are a great way to learn good manners and how to interact and play with others politely and respectfully.

Tell us a little bit more about your trivia board game, Poppycock!? 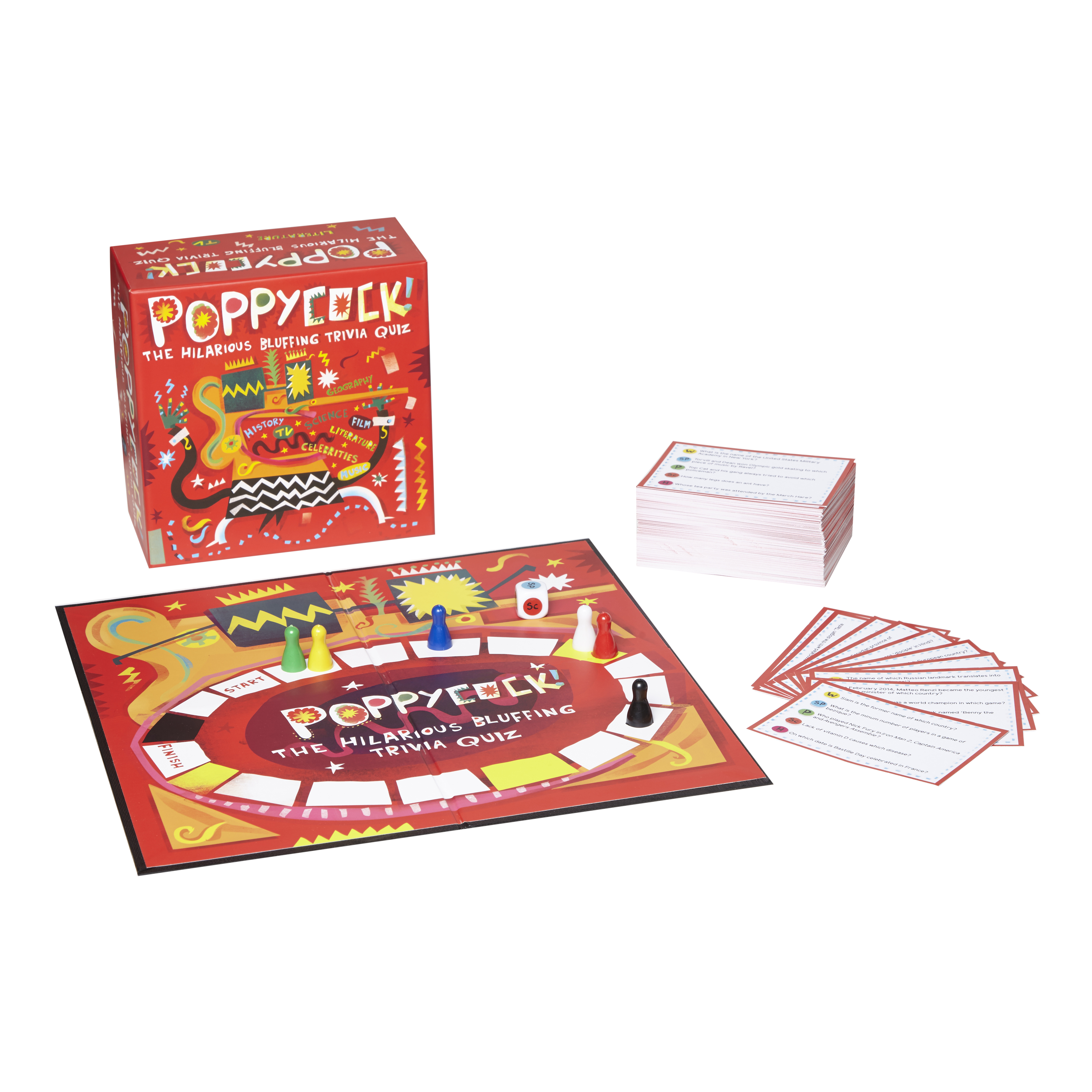 Poppycock! is a hilarious and fun trivia game that tests not only your knowledge but your cunning too. On your turn you roll the dice to pick your question category. Answer if you know it, but you can bluff if you don’t. If you think someone is bluffing, call out Poppycock!. The first person to get round the board is the winner. If no one Poppycocks! your answer, you move forward even if it’s wrong, but if you Poppycock! a correct answer, you have to move backwards. This means that you can win even if you don’t know the most answers. And I’m very proud that Poppycock! won the Hero Toy award at the London Toy Fair this year.

We’ve heard you’re a dab hand at playing chess – what are your tips for beginners?

1. Have a good plan and use all your pieces as part of a team. If you don’t, it will be easy for your opponent to defend.

2. Avoid premature attacks and make sure to look at the big picture.

3. Know when to trade pieces, and never exchange pieces of the same value unless there is a very clear advantage for doing so.

What did you wish you knew when you first started Clarendon Games? 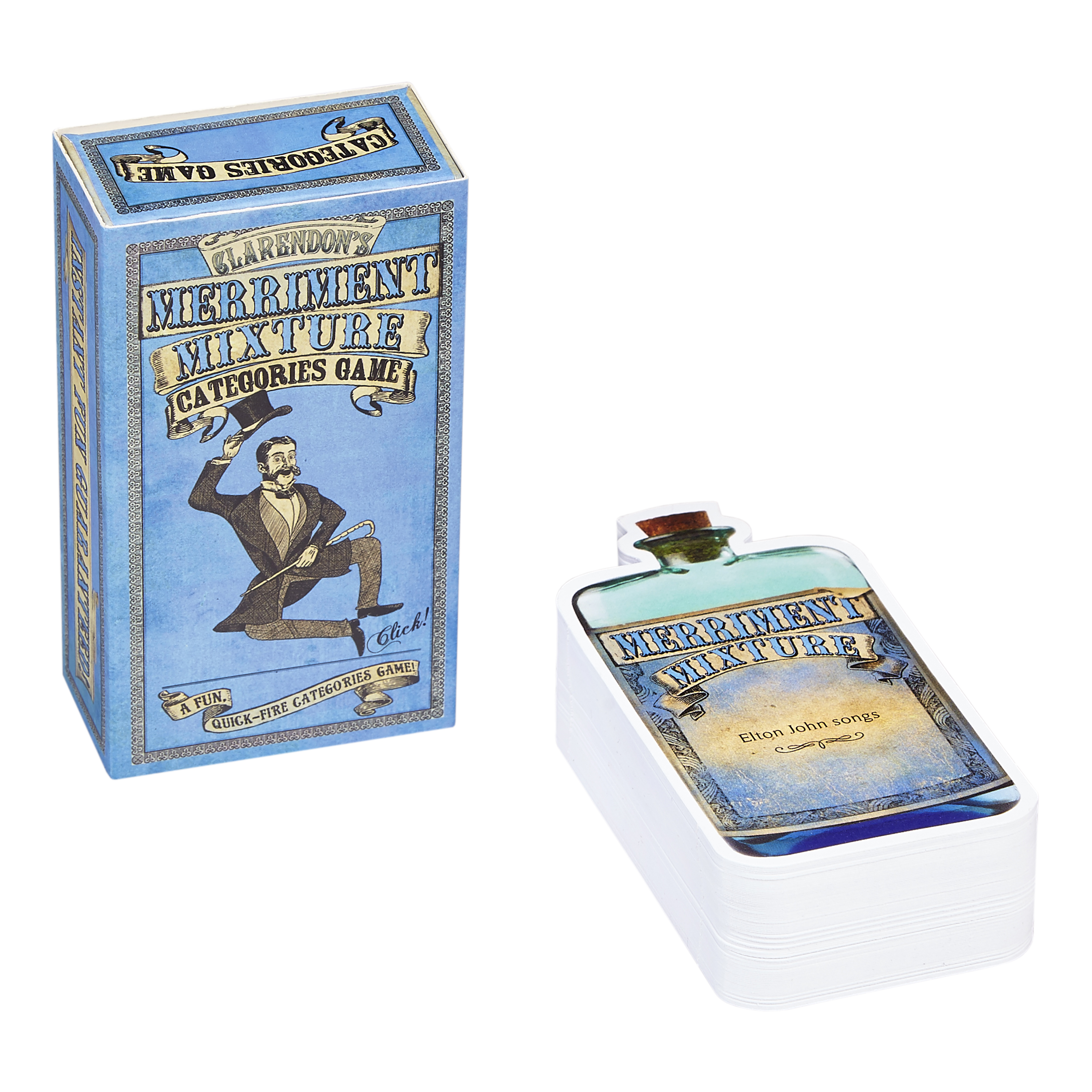 I wish I knew how much money would be required. What I’ve learnt is everything takes three times longer and is three times more expensive than you plan for. Expenditure required for operations (sales, marketing, new product development etc.) is significant, and as a publisher of consumer products if you don’t maintain your working capital and increase it as you grow then you have no product. Since I started from scratch without any prior experience in the industry, I also wish I’d had more contacts in the industry when I set out. It takes time to build relationships and trust with the key people who you need to know if you want to scale up.

Are there any new board games on the horizon?

I’m working on two new games for 2019. One of them is an abstract, pure strategy game, which is a lot of fun to play. It will be made of wood, and it’ll be very easy to learn, with few rules, and a game will only take 10 – 20 minutes to play. In the game you have to be the first to build a bridge across the board for your little character to cross. My girlfriend is called Bridget and I’ve named it Bridge It! after her! I’m also working on another charades type game called Einstein Eats Eggs, where you have to try and describe alliterative phrases for your teammates to guess – all against the clock.