Dubbed the UK’s first ‘bleeding burger’, Moving Mountains hit the UK earlier this year and it caused quite a stir amongst the vegan community.

Driven by a long-standing passion to make a positive difference to the planet, Simeon launched Moving Mountains with a mission to bring real, radical change to people’s everyday diet by giving a plant-based alternative that is genuinely competitive in taste, texture and satisfaction to animal meat products.

For anyone who isn’t familiar with Moving Mountains – can you tell us a little bit about the brand? 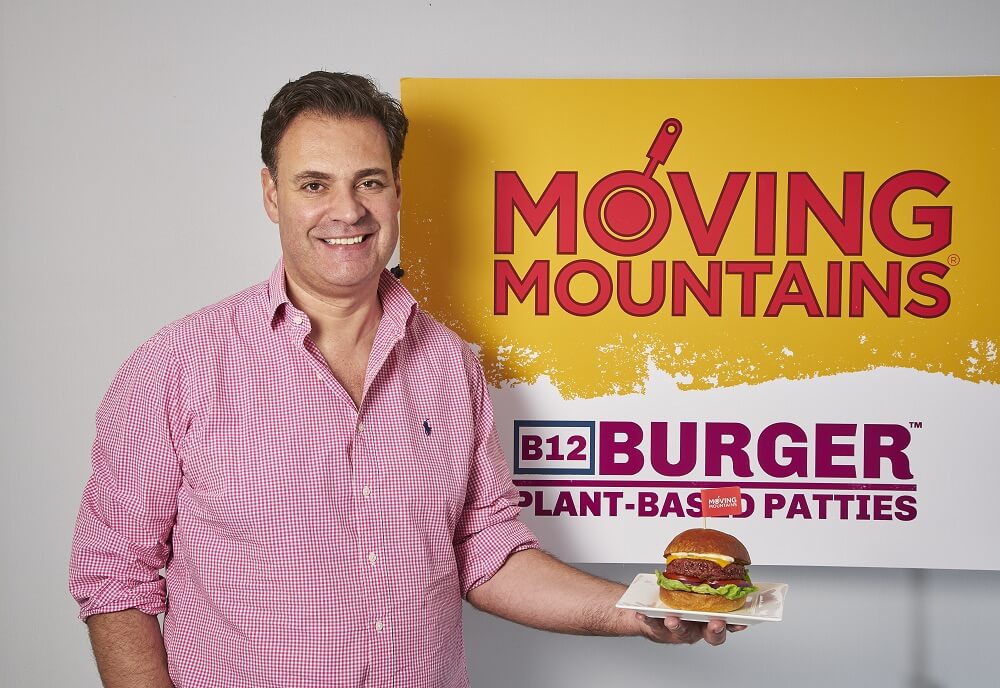 Moving Mountains is a British company leading plant-based innovation into unimagined territory with the UK’s first ever meatless bleeding burger. We did a limited lunch time offer and preview of the B12 burger in February 2018 at Mildreds Dalston and the burger is now available full time on the menu for lunch and dinner at all five of Dirty Bones’ venues (Kensington, Carnaby, Shoreditch, Soho and in Oxford).  This is the first step of our mission to provide a more sustainable solution to food for all. Not a veggie burger, Moving Mountains smells and tastes as indulgent as regular meat.

Where did the idea first come about?

We have been working in the organic and plant-based industry for over 20 years and founded the brand Ecozone, which provides ethical cleaning products. However, the cleaning sector is fairly limited in the impact we can have on the environment; we spotted a gap in the market to develop a plant-based food product that could affect positive change for the health of the planet and reduce animal meat consumption. Although there are plenty of vegetarian and vegan burgers available to purchase already, we are the first food producer to offer a 100% raw plant meat burger that can genuinely compete with the taste, texture and satisfaction of a regular animal meat version.

The ambition for Moving Mountains is to provide a real solution for food that is sustainable but doesn’t compromise on taste, therefore providing a viable alternative for vegans, vegetarians, flexitarians and traditional meat eaters. Our mission is to bring real, radical change to people’s everyday diets by offering plant-based meat that requires less land, less water and produces less greenhouse emissions than animal meat.

How long did it take for you to create the end product? 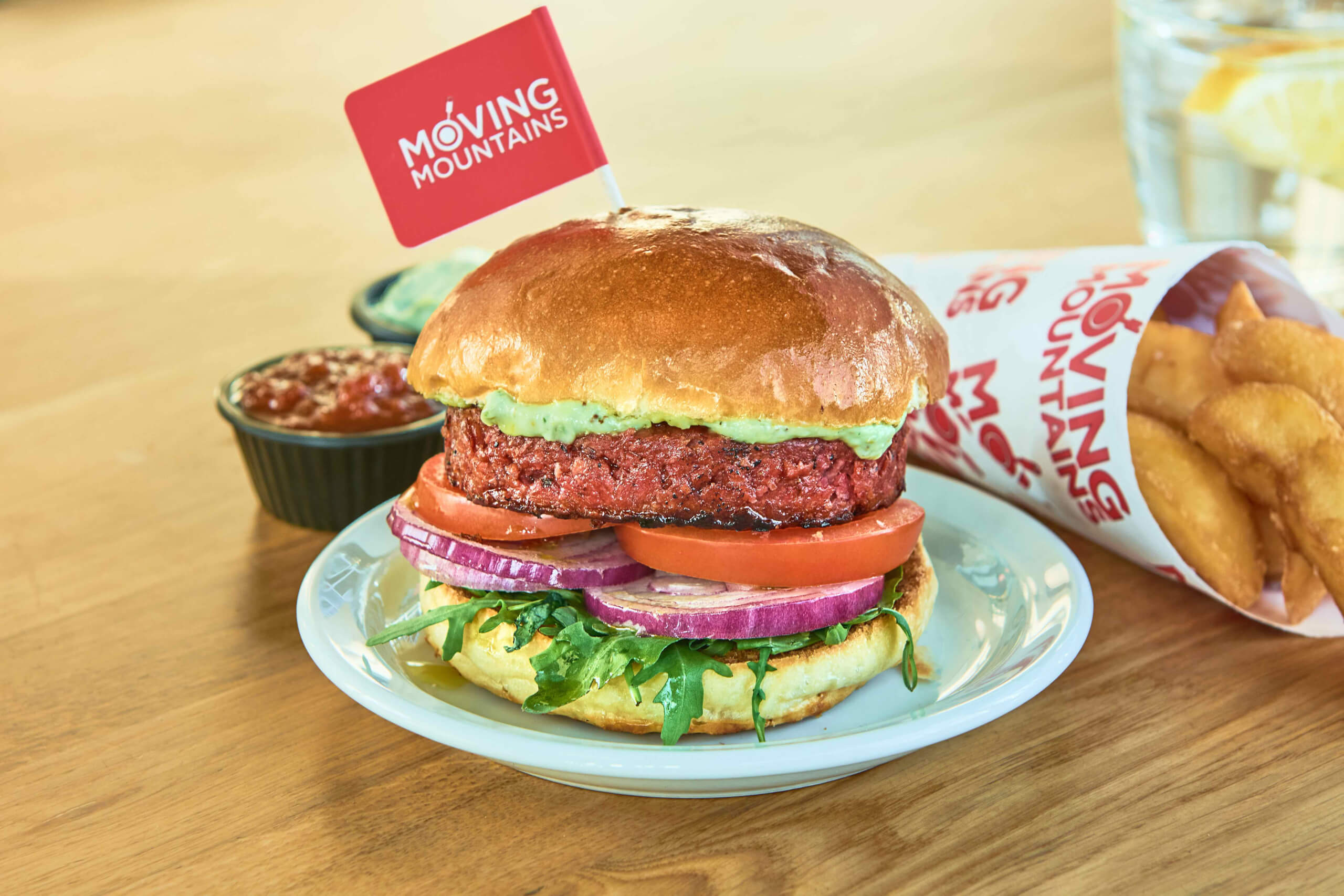 We have been working alongside an amazingly dedicated team of scientists, chefs and farmers for over two years in order to create the B12 burger. With over 100 test-kitchen recipes tried before launching, the burger uses simple and natural ingredients and incredible scientific processes in order to replicate animal meat in every way. In our kitchen there is no ‘lab grown’ meat in sight – we use only natural, plant-based products to create a meat-like patty from raw plant-based goodness.

Formulating the best possible recipes for the B12 Burger has tested the limits of both ourselves and food industry experts, and we will continue innovating, developing and experimenting with different flavourings to bring new and exciting options to the market.

Why did you decide on a ‘bleeding’ burger, rather than a classic vegan burger?

Marketing the product as a ‘bleeding burger’ was a step to differentiate the B12 Burger from a regular veggie burger that doesn’t deliver a meat-like experience.

We also wanted to build curiosity and excitement from the public and press by emphasising the ‘bleeding’ juiciness of our meatless burger to really demonstrate how it is a viable alternative to the classic juicy beef patty. The USPs of the B12 Burger have been described using language people associate with meat; from highlighting the ‘bleed’ of the beetroot juice to the sizzle of the burger whilst cooking in the pan.

What’s been the feedback so far?

The feedback has been absolutely fantastic, with restaurant goers being bowled over by the incredibly taste and texture. The taste has truly exceeded people’s expectations, and it’s been amazing to see the change of perception from meat eaters!

We have a rapidly growing fan-base and have been inundated with demands through our website and social media for the B12 Burger to go mainstream and be available for more people, in more restaurants and retailers around the globe.

Are you planning to make the burger available in other restaurants? 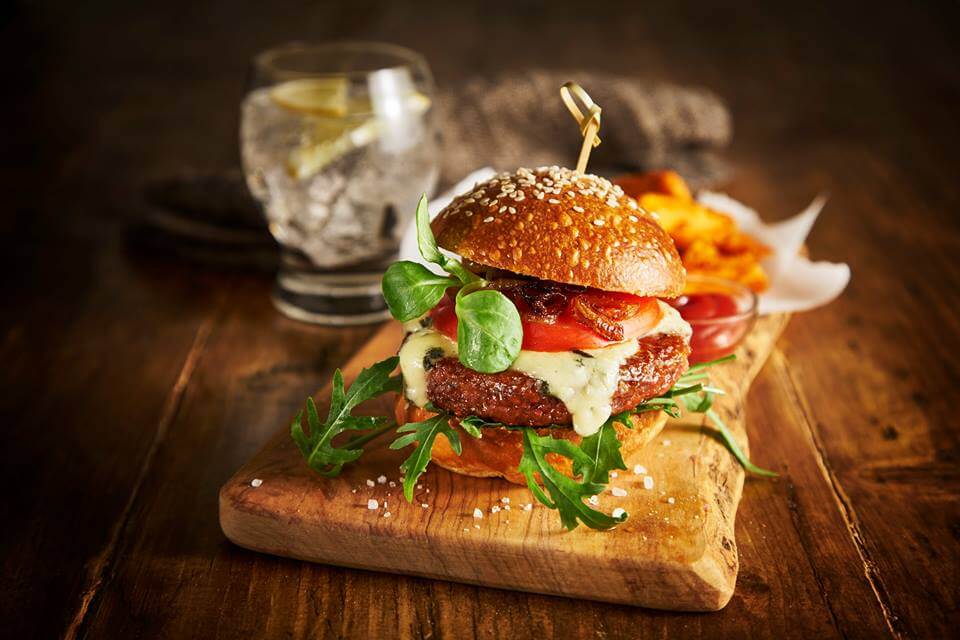 We have only recently launched, so at the moment the B12 Burger is available in London and Oxford in Dirty Bones restaurants with an exclusive Vegan Mac Daddy serve priced at £12, which features the B12  patty topped with vegan mac & cashew ‘cheese’, smoky mushroom ‘short rib’ and espresso-spiked BBQ sauce on a soft bun! It is also now available at Lucky Beach Café in Brighton in six different serves. We are hoping to expand the number of restaurants who have Moving Mountains on their menus and have had a great deal of interest from a number of different retailers already. Watch this space!

Are you planning on expanding the range?

We decided to launch Moving Mountains with the B12 Burger because we felt that the public and the media love to talk about burgers – more so than any other meat products. Reimagining a traditional beef burger as a raw plant-based meat patty has captured people’s imagination brilliantly, and been a great way to join in the plant-based conversation and debate nationwide.  Regards new products and further launches to the UK market, we are concentrating on the B12 Burger for now but have already working on new products and look forward to growing the brand with these soon!

What vegan products do you admire? 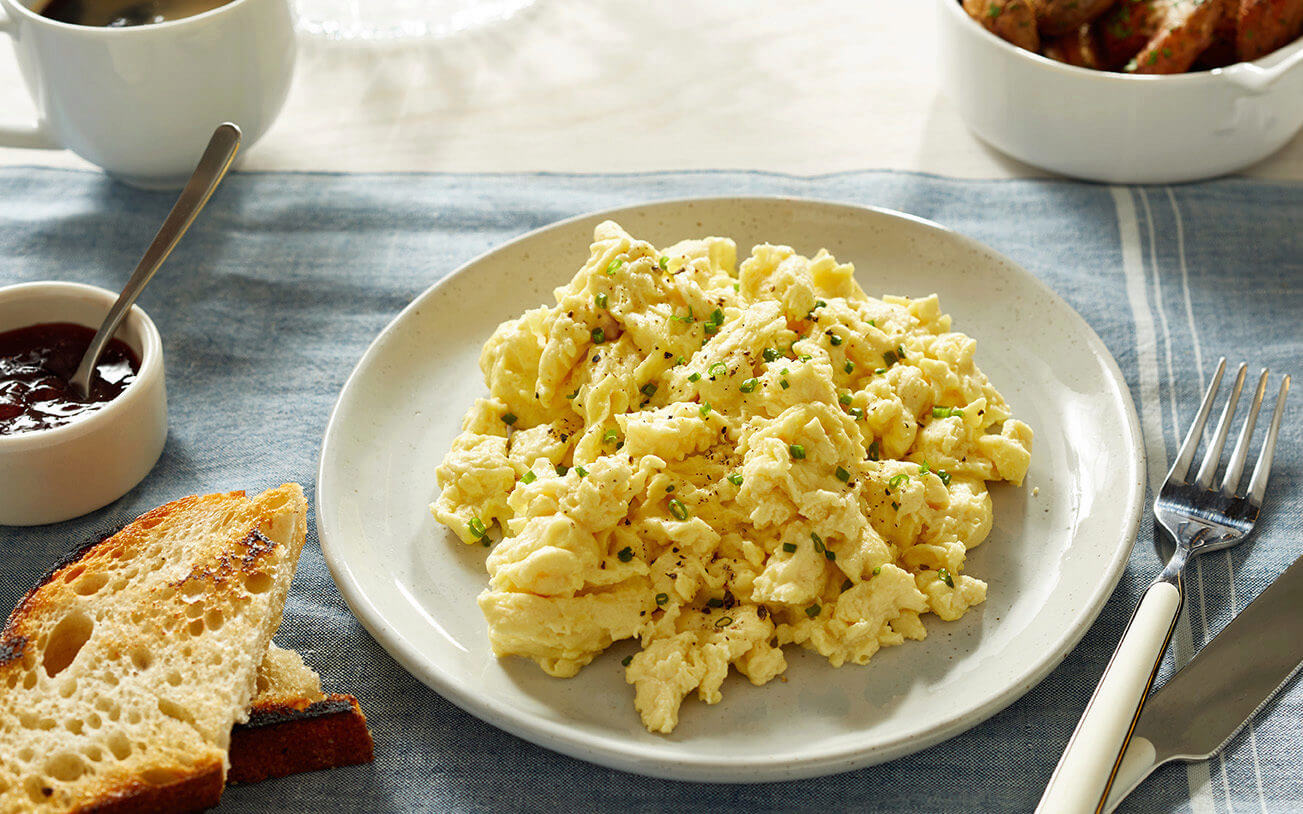 The US market has developed some incredible plant-based innovations in recent years, and a number of start-up brands have created some really amazing and admirable plant-based products. Hampton Creek’s new ‘Just’ Scramble is one such innovation, which is a plant-based imitation of scrambled egg – and tastes incredible! The scrambled ‘egg’ has an unbelievably realistic texture and impressive protein content making it a viable alternative for the real thing.

I think Kite Hill are another very impressive US food producer that have been developing a range of artisanal vegan cheeses which combine ground-breaking technique with decadent and delicious flavours. Kite Hill ‘cheese’ totally outshines any other cheese substitute products I have come into contact with as, like the ‘Just’ Scramble, they can genuinely compete with the real thing. I think this aspect of producing plant-based food is hugely important and absolutely paramount to growing the movement and attracting the flexitarian market.

What do you think is going to be the next big thing in terms of vegan food/products?

The last year has seen an explosion in the plant-based market. In the UK alone there has been a 350% increase in people identifying as vegans, which is a huge change for the food and drink market and very exciting for us. As veganism goes mainstream, even meat eaters want more plant-based products and brands are innovating more premium offerings to cater to the growing demand. Gone are the days of dry and lacklustre meat alternatives that bear no resemblance to the real thing – people can finally enjoy delicious plant-based food.

More and more Brits are now bound together by their shared attitudes towards bigger issues and initiatives: sustainability, social and environmental causes and ethics and people want to know if their favourite food brand really cares about the planet. We hope this trend continues to grow and more brands like Moving Mountains create amazing meat alternatives for everyone to enjoy!