One of the most in-demand electronic producers on the planet, Topic has had a huge year, with 2021 hit  ‘Your Love (9pm)’ with German DJ ATB nominated for Best International Song at this year’s BRIT Awards, and the track recently becoming his second to certify platinum. He has also collaborated with the likes of Lil Baby and Bebe Rexha, and most recently with Becky Hill on ‘My Heart Goes (La Di Da)’, and Clean Bandit and Wes Nelson on ‘Drive’. We chatted to Topic about his career in music, creative process and what’s next: 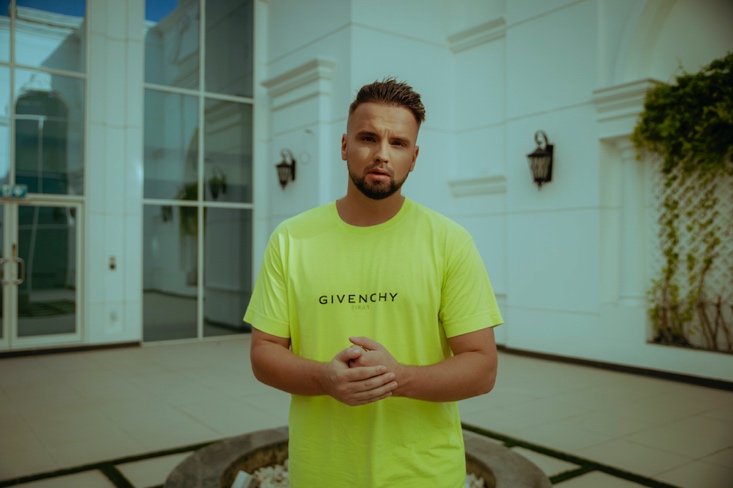 I owe it to my former music teacher that I got into music production at all; he had a project in 10th grade where he introduced us to the production software logic, which I currently still use. In the process of learning the basic skills, I fell in love with it and spent my whole time outside school making music.

For a while, I only produced hip hop beats for others. I then experimented a lot with different genres and began producing something for myself – just for fun at first.  I didn’t even think about selling records, being a DJ and performing then.

I’m loving your latest single ‘In Your Arms (For An Angel)’. Can you tell us a little about the inspiration behind the track, and what the response has been like?

The writing process was actually not really glamorous, haha! A7S, with whom I started working closely in 2018, and I met in the studio to work on new songs as we always do and then we came up with the first idea of it. A few days later Paul’s melody just came across my mind and I instantly thought that it could match the track. And it did fit instantly! In the process, we found out that Robin was actually working on a track with the “For An Angel” sample himself and rather than being competitors, we chose to be collaborators and do it together.

Nico and I also have been friends since working on our track “Home” in 2015 and wanted to release a new track together anyway. I sent “In Your Arms (For An Angel)” over to him, he connected with it straight away and got to work.

The song is a collaboration with Paul Van Dyk, Robin Schulz and Nico Santos, and you’ve worked with many other huge names – ATB, Becky Hill, Clean Bandit to mention just a few. Who would be your dream collaborator?

There are SOOOO many great artists. I can´t pick one!

Both ‘In Your Arms (For An Angel)’ and your hit ‘Your Love (9PM)’ sample or reimagine classic dance tracks. Are you often inspired by older music, and why?

I didn’t really plan to start reimaging dance classics to begin with and it’s not something I will now exclusively do – it all started when ATB came to me with the idea to make a new track with his sample. Both “9PM” and “For An Angel” are childhood songs for me, as I was born in the 90s and basically grew up with them. Maybe that’s why I have such a deep connection to them.

I think last year when I played the first festival between lockdowns again in Serbia. It was a crazy feeling not seeing any crowds for 18 months, and then going to play a major festival with thousands of people lining up to celebrate together.

What does the Topic creative process typically look like, could you describe it?

I’m a pretty “messy” person! I don’t really plan my days. So there is no typical creative process. Most of the time I’m sat in my studio playing around and if I get some good ideas I go into a state of trance and really get into it.

I mostly work on my songs with Alexander Tidebrink, he’s a genius when it comes to songwriting! I tend to always make songs, which feel right to me not thinking about if it could become a hit or not.

You have secured yourself firmly within the global dance scene, do you have any advice for those just starting out?

Being consistent is the most important thing! It can get SO frustrating for years on end, I’m speaking from experience. But if you just stick to it something good will come out of it.