Paul Foot. What a man. What a comedian. With his quirky humour and hilarious live performances, Paul is a maverick in the comedy world. I caught up with him to discuss his latest Edinburgh Fringe show, his extensive collection of ties and his plans for the future:

Hey Paul! I hear you’re in Manchester – what are you doing there? 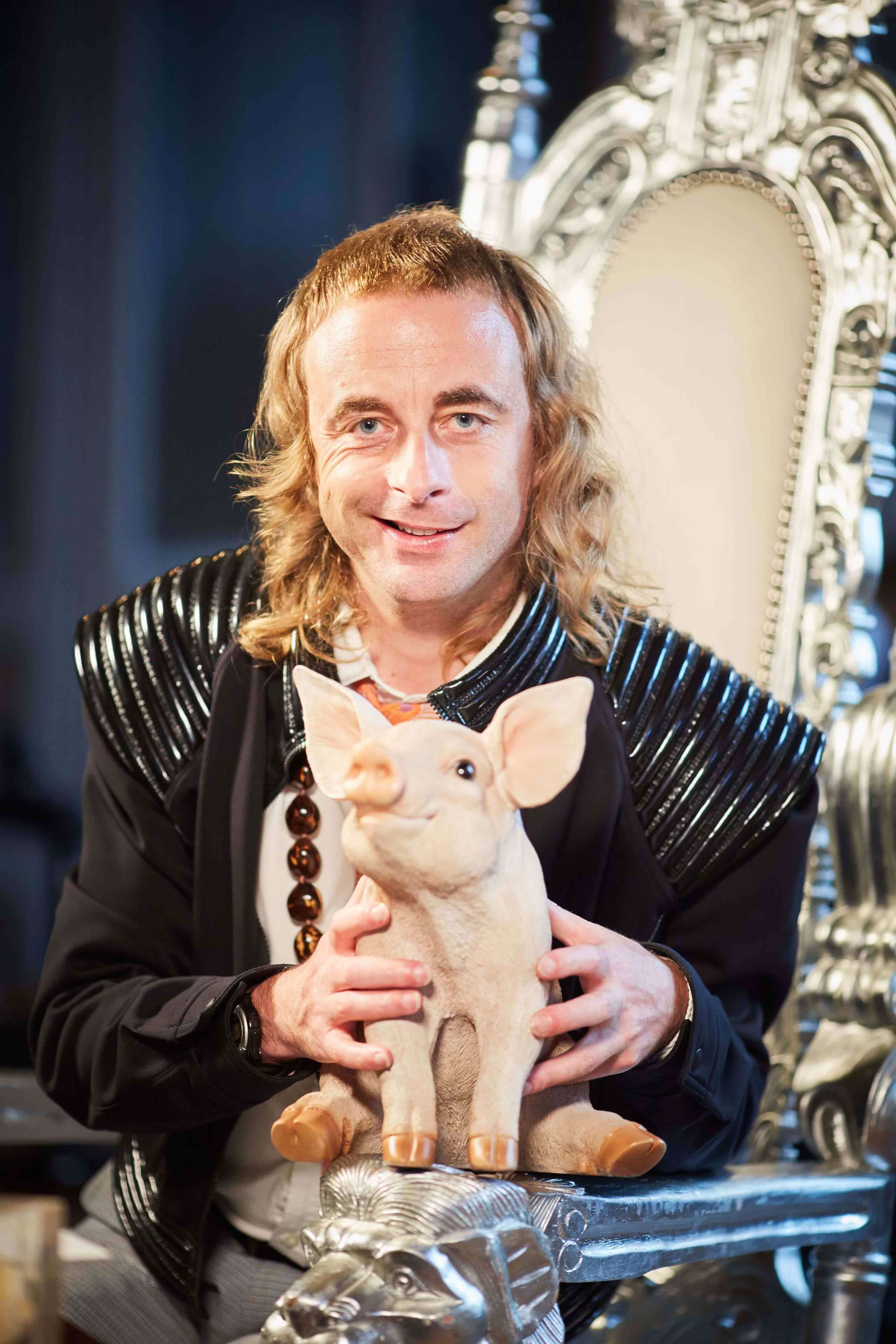 I’m here to talk about King Rudolph II of Czech Solavkia and his cabinet of curiosities. King Rudolph II was a King in the 15th century and he was very eccentric, he liked to collect all strange and curious items. Not only did he collect them, but he also collected a brewery because he liked the Krusovice beer so much. The Krusovice was like a royal beer, and it still is a royal beer, really. I shall be here in Manchester, and I’m curating my own cabinet of curiosities, so I have some weird things that I’ve have brought in my suitcase from London – like my little porcelain piglet, and my solar powered flower, and I also have lots of people coming to the evening to taste the Krusovice beer and to learn about how it’s made from the expert. He’s going to tell them the history of the beer, how to pour it like a connoisseur, and they will also be bringing curious items with them which I will be choosing from and placing them into the cabinet of curiosities, and discussing with them why their items mean so much to them.

Can anyone bring anything, like a loaf of bread?

They can bring anything they like. Of course, the more curious the better. They could just bring a loaf of bread, but they could bring maybe a loaf of bread from the 1930s which has been preserved in a special sawdust, or they could bring a cast of a loaf of bread. A loaf of bread that lived many years ago, but maybe died. I have assorts of strange things like my specimen of spiders, and strange beetles and I’ve got a shrunken strange funny head, which is all small and dead. 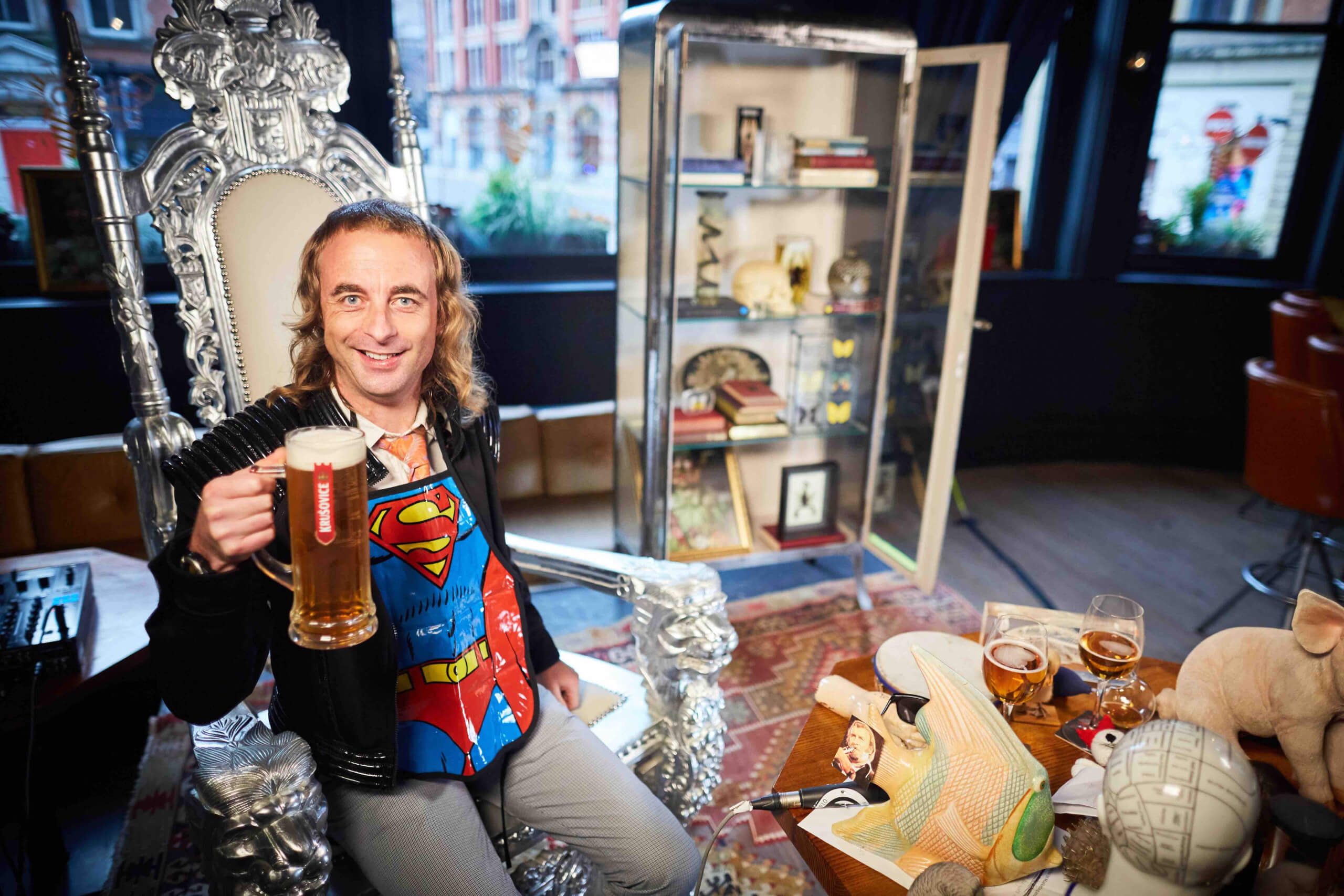 I’m trying to think of some things that aren’t dead. I’ve also got a butterfly collection, but they’re dead. Most of the things I have got, are dead, or look like they would’ve been alive once. Who knows what people will bring. I don’t know, I’m just guessing, but someone may bring something like, an inflatable clock. A clock that you blow up and only says one time, like ten past two, but it’s very accurate of course, twice a day. I’m just guessing. They might bring a giant pair of shoes which is quite large, like you put them on and they’re normal size to your feet, but then they have loads, and loads of padding and they make your feet look bigger than then really are. People will be like ‘oh you’ve got big feet’ – but little do they know it’s an illusion.

What can people expect from your Edinburgh Fringe Show ‘Tis a Pity, She’s a Piglet’? 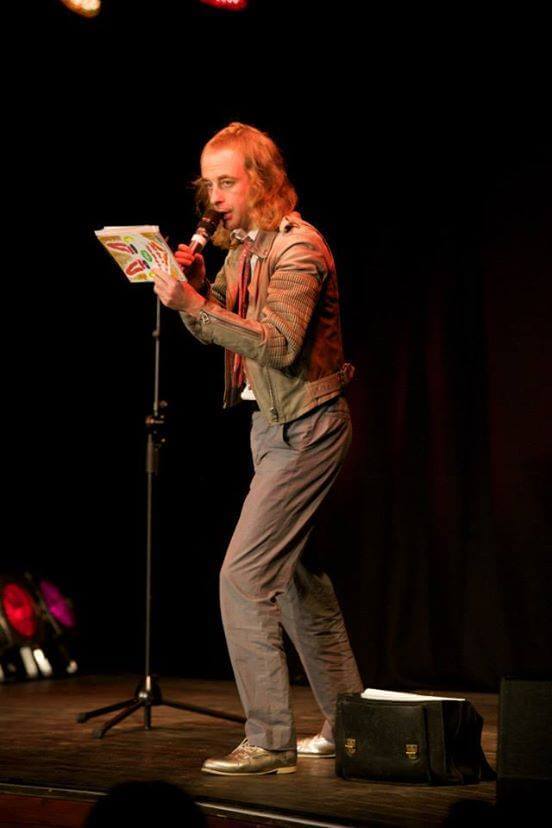 Well, my show contains my new humour that I’ve invented called ‘literal surrealism’, which is humour that is possible, but highly unlikely. There are lots of very possible, but highly unlikely scenarios to discuss. For example, a baby who stinks strongly of body odour, of course the BO baby. The baby’s parents love it because it’s their baby, but obviously they’re ashamed of it because it absolutely stinks. They have to pretend to people that they don’t actually have a baby, and make a lot of lies up, whilst secretly looking after their baby. And also, literal surrealism covers all sorts of different subjects, and allows me to talk about some quite serious topics and make some quite serious points about terrorism, and online trolls, but in a very silly way through the medium of literal surrealism.

The show also contains humour about people’s school days, and humour about married couples and holiday hell. I think everyone knows what that is. It’s two people, who love each other ever so much, have been together for forty years and they go holiday, and what can be nicer than a holiday. But of course we know that they just moan at each other for the whole holiday ‘get off my beach mat’. Also in the show is the pepper room. It’s a room full of pepper and when you go in it makes you all like ‘arghhhhh, pepper’. It’s not an actual pepper room, it’s me describing the pepper room, and communicating to the audience the atmosphere and mood of the pepper room, which is quite alarming. That is discussed in a very light hearted way. I also talk about the importance of a full English breakfast – sausage, beans, hash browns. The importance of all the items. It’s very easy to forget an item, like the mushroom, or maybe a fried egg. Nothing is forgotten. No stone is left unturned on the discussion about the importance of the Full English

It’s a roller coaster of serious thoughts mixed with lies. All done of course in an amusing manner.

You have a wonderful collection of ties – where do you purchase your ties from? 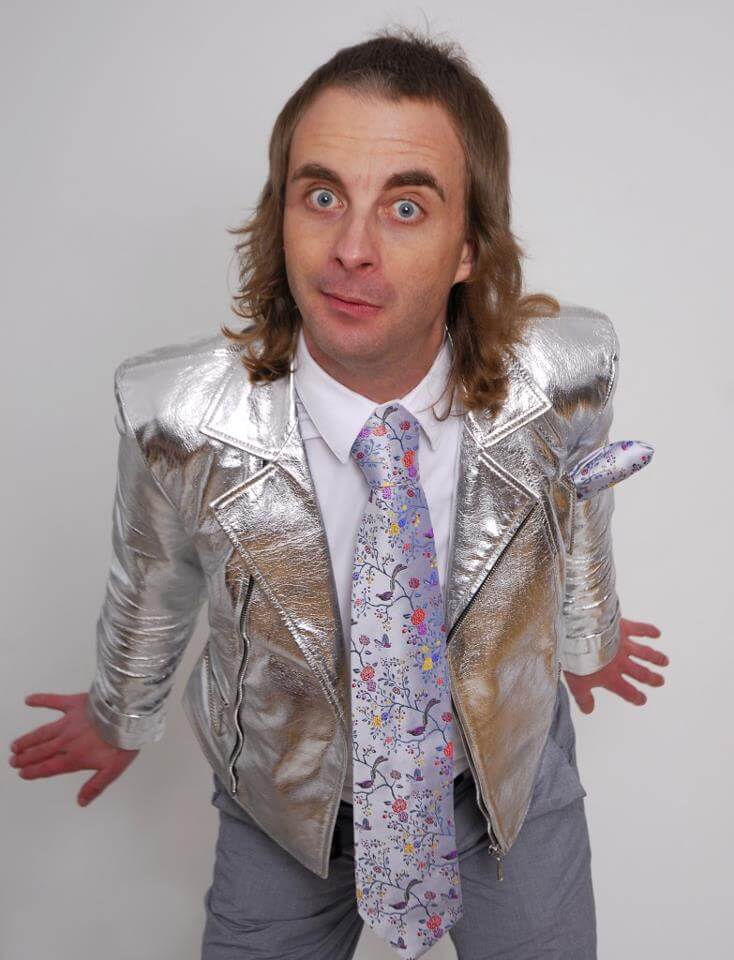 It’s a mixture. Some ties have been inherited from dead people, some have been given to me in the streets. That has actually happened ‘oh it’s Paul Foot, hello Paul Foot – you might like this tie’ and they give me it. So I’ve got ties from those times. And I also have ones that I have bought. I always tend to go to one particular shop that have really lovely bird ties, and I choose them very carefully. It has to be just right. It has to have mainly birds on. I think ties should always have a bird on. I want a tie that’s a bit silly, but not too silly with lots of nice birds on. Also, recently, as well as having ties, I’ve moved heavily into necklaces. When I was in Hawaii earlier this year I was given a seed pod necklace, which were only ever given to Hawaiian royalty. I’m very much into wearing necklaces, and I’ve been purchasing some necklaces. Why is it only women who are allowed to wear necklaces, why can’t men wear them? Well I can. I’ve recently bought an oyster shell necklace with a magnificent polished oyster shell. It’s absolutely, if I do say so myself, a tremendous necklace. I look absolutely marvellous in it. It really is superb.

Would you ever consider bringing out a fashion line?

I have thought about bringing out my own fashion line. All the items of course would be from the collection of things I wear. It’ll be a very straight forward fashion line, because, the shoes would always be sliver, or would have have some silver in it. The trousers would always be checked and grey, and the socks would always be non matching as I never wear matching socks. And there would also be the essential item that everyone should have in their wardrobe, which of course is a chastity lock. I always wear mine off my trousers. I would make my own magnificent jackets myself – like, for example, albatross jackets, that look like two giants wings coming above the shoulder, just magnificent. I’ve just invented that, that goes to show how inventive my fashion line would be. That’s just one of the ideas from the collection. It’ll be a very strong range.

If there was a catalogue to come out, I would quite like to be pictured with the oyster necklace. I’m just floating around some ideas here.

I think that would look good. But I think I could see you in a conch bracelet. Or conch earrings. Huge conches that hang down from your ears. Magnificent.

Very Lord of the Flies-esque.

Yes, except without all the bullying.

What does it take to be a Paul Foot connoisseur? 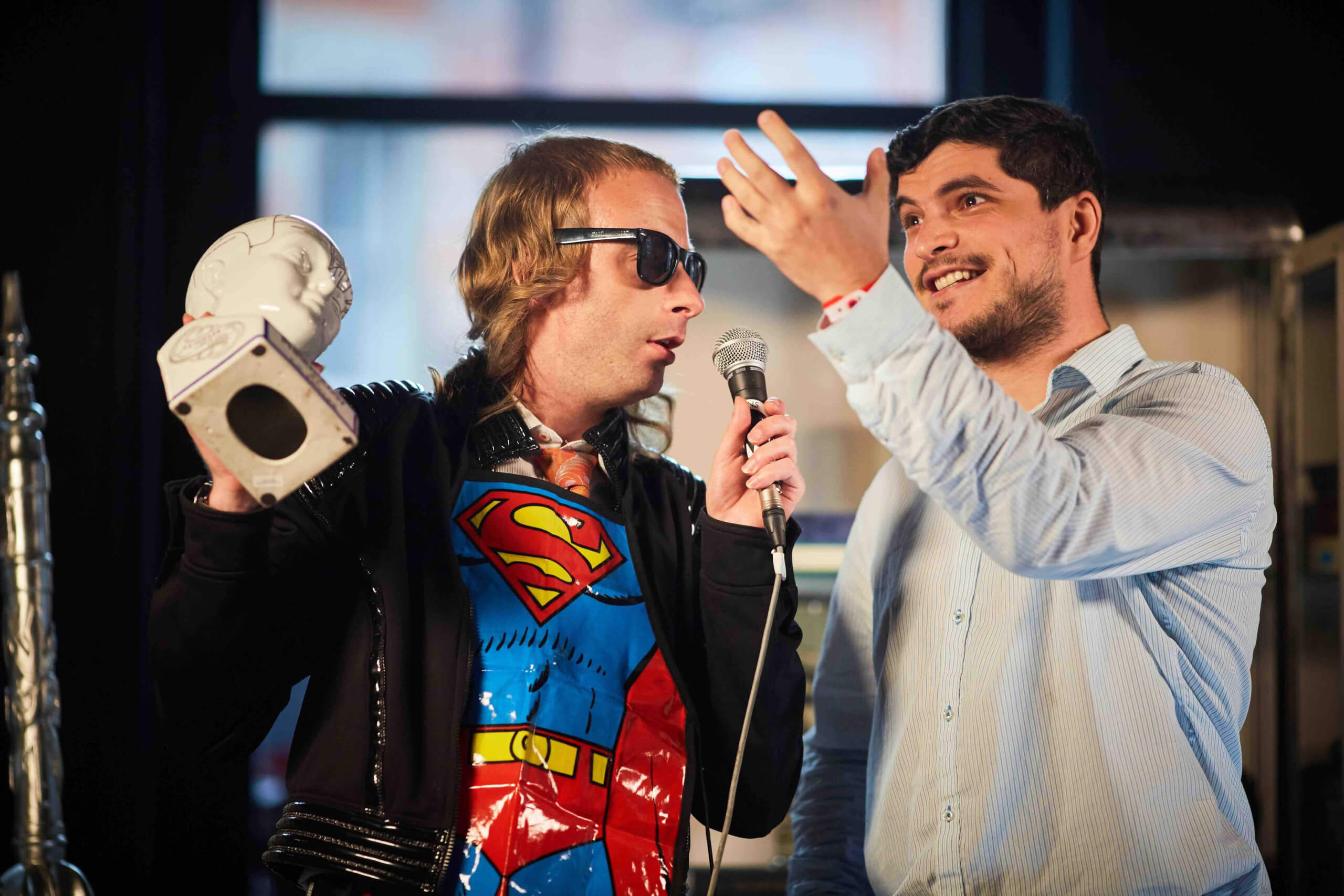 On the face of it, it’s quite straight forward. You go to my website and there’s a button to join the Guild of Connoisseurs, that’s the easy bit. Then of course you receive the email to secret shows, and my secret tropical humour. Then the next easy bit when you’re a connoisseur, you have to remember that when you see me, you must bow. I don’t know if people are a connoisseur or not until they bow. I, of course, bow back as I’m not royalty – I’m a common man or lady like them. Then, of course, the difficult part of being a connoisseur is the emotional elements. Well, emotional blackmail. Constant demands for attention. Ridiculous twitter messages posted at all hours. That’s the challenging aspect, you have to keep up with all the crazy thoughts of my mind. At all hours. That’s optional, of course.

Do you have a pre-show ritual? 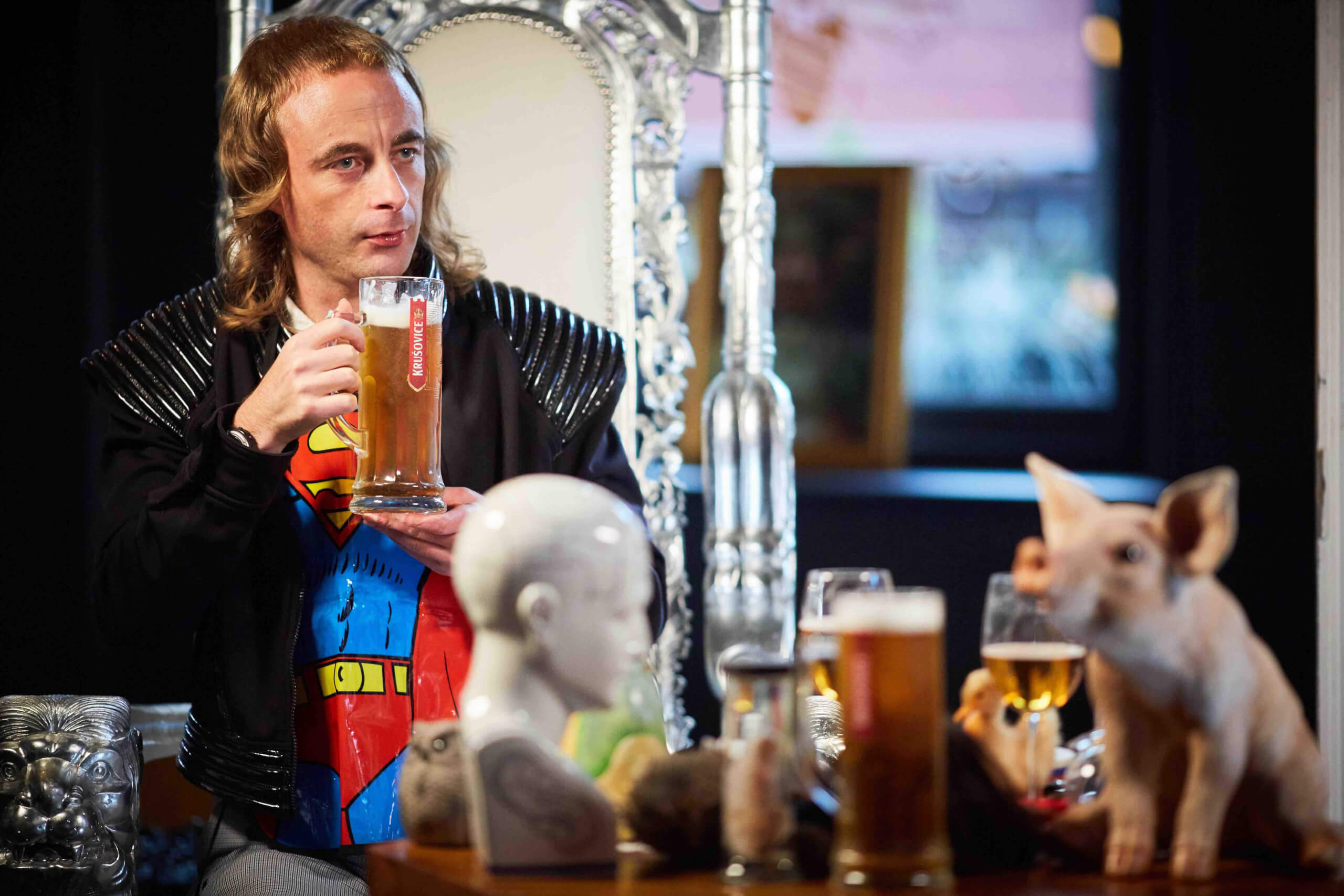 I tend to eat before a show, most people don’t, most people are nervous and they don’t like to eat, but I’m never nervous before a show – I’m just excited. So I always like to have a nice bit of food, and I normally like to have a pie. Any kind of pie. So before any show I always have a pie. Just like my father, I always take my pie out of the oven without oven gloves, because my father was always against oven gloves. He just didn’t agree with them, he just morally believed that they were wrong. He never gave a reason, he just passed it on to me. I just have to whip the pie out very quickly, get my fingers on it and get my pie out. And quite often of course, I do tend to drop the pie on the floor. I say ‘I’ve drop the pie on the floor’, then I normally have a second one standing by. That’s my ritual; to cook as many pies as possible, and hope that at least one of them gets to the plate.

It feels a bit like the Totally Wipeout course.

It’s like a game show, but all you win is a pie.

I think that’s a better prize than most game shows.

I think that would be a good game show, wouldn’t it? Win a pie. People compete for a pie.

What’s your favourite kind of pie?

My favourite, I suppose would have to be a partridge and quail egg pie. If I had a game show it would be called Pie or Die. You either get a pie, or you die, well you don’t die you get wheeled off the set in a pretend coffin.

I think that show has got legs to be honest.

I think it has, it’s a little dark. It depends, if you don’t get through round one you are removed from the studio in a body bag. All in good fun.

You can’t put a price on flaky pastry.

How would you describe your show in one word? Not the Pie or Die show – your fringe show.

You did ask for one word, I could’ve gone into more detail. I suppose, especially in this show, the comedy element is on the surface, and it seems very silly like I’m mucking around with the audience. But under the surface, hidden, it has hidden depths. There’s more points about the world that’s being made.