Luxury ready-meals are on the rise with two in three adults thinking that dine-in deals taste the same, or better than take-aways. Today, the UK customer spends £9 million a day on ready meals. We met new kids on the block, Lisa Sohanpal, founder of Nom Noms World Food – a collection of premium ready meals for adults and children will be available through Ocado from Monday (27th February). Here’s the lowdown on the brand shaking up the ready meal market:

How did you come up with the idea for Nom Noms World Food?

It came out of a personal need as a busy working mum. I was an international director of medical devices, managing 47 countries, and travelling around the world all the time – at odd hours. Once I started having children – I had three in three years – I wanted them to grow up with a diverse palette and be culinary adventurous. However, in reality, replicating those amazing global flavours in my own kitchen proved to be nightmare. Preparing healthy, tasty meals from scratch is just so time consuming – I was a slave to my kitchen. I often thought to myself, how is everyone else feeding their kids? So I asked the parents at the nursery – ‘what are you guys doing?’.  The response would often be ‘I just give them pasta, or nuggets, pizza. It’s easy and we know they’re going to eat it.’ Some families are lucky enough to have grandparents that would make a batch of food.  Firstly, I don’t have grandparents around the corner and secondly, I don’t want my children just growing up on pasta.

I decided to start by creating Indian meals, because that’s my heritage. Indians rarely have one dish for dinner. They always have the roti, the daal and a variety of other curries. I really wanted to bring authenticity to what’s currently available out there, and show people that Indian ready meals do not need to be bland or processed. I wanted our collection of ready meals to be convenient but also ensure that our customers are not compromising on health, taste and most importantly, quality.

It started off with Mini Nom Noms, because I had created it for my children but we quickly realised that there was a real appetite for it amongst adults. We did a taste testing for families with Virgin Active Health Clubs and it was the adults that wanted to be able to buy the meals for themselves. We started noticing that the combination of taste and the healthy elements and convenience perfectly complemented their lifestyles. So that was how Mega Nom Noms was born.

We decided to launch Mini and Mega Nom Noms together – as a family option. We’re the first family focused food brand, where we can all enjoy international foods in a healthier way. Healthy meaning there’s no preservatives, or additives, or E numbers, no added sugar, and there’s a tiny bit of salt – but not going over the green zone. The only difference between the mini and mega nom noms is that for grown-ups, there is little bit more of a kick.

How long did it take from idea to product?

In August 2015, we did a soft launch with Selfridges and Ocado. And we were sold out within 10 hours of going live on Ocado. The six month worth of stock that I had enough money to pay for, we sold in six weeks. I then had to find a producer that could produce to the volume of business that I was getting. I was getting orders from around the world, and that was predominately because we were winning so many awards too; namely for innovation, because we’re really shaking up the ready meal category. We are finally at a stage where we are ready to fully launch our collection.

There’s a massive stigma attached to ready meals – was it hard to change people’s perceptions?

Our research has shown us that people are hungry for healthy, tasty ready meals. My husband and I are both from medical backgrounds so for us, the health credentials needed to be right on top of the agenda. There was no way we could produce food that wasn’t healthy or nutritiously rich with vitamins and minerals. In butter chicken you usually use full fat cream in a restaurant, we use yogurt instead. We had to constantly look for alternative ways to ensure that our meals are nutritious whilst also being tasty. We wanted to bring those global flavours to life.

People’s lives have become increasingly hectic and they want good food that is convenient. Our meals are simple to prepare, ready after just 90 seconds in the microwave or 15 mins in the oven.

What’s your favourite meal from the range?

This is a hard one because I think they’re all great! However, if I have to choose, I would pick the chicken biryani.

Are you adding any other cuisines to the range?

We are. We’re adding a British cuisine to the range, and new products. In terms of meals, we have a mega roast chicken dinner. It’s a real treat – the gravy is made with 17 herbs and spices and it also comes with a chocolate pudding where the sauce is made with no sugar but sweetened with dates. It’s seriously delicious!

Also, in the coming months, we will be launching a variety of ‘Superfood Multigrain Wraps’. Again, inspired by flavours from around the world, the collection will include: Greek falafel with salsa, Korean beef, Mexican chicken fajita and black beans, Caribbean jerk chicken, Arabian lamb tagine, Indian lamb tandoori, American smoked BBQ beef and Boston beans, and Indian veggie kathi. Each Nom Noms wrap is boosted with superfoods and include unique spice blends authentic to the origin of the flavour.

What advice would you give people who are starting a food brand? 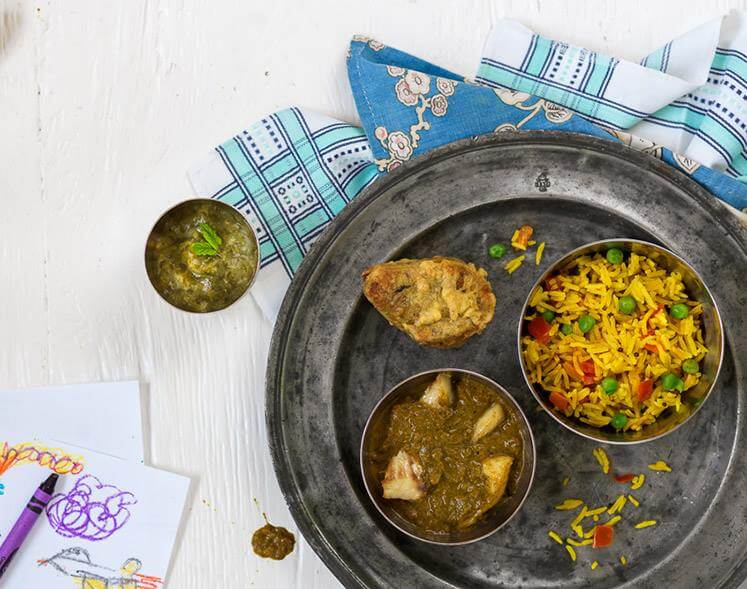 When I first started I thought the process would be really fast from the concept to seeing my products in people’s homes. But it takes time so you need to be patient! You have to allow yourself a couple of years to go through development, testing, and assessments. There’s so much to test before you know if it’s going to be successful or not.

Also, make sure you have sufficient finances – you need triple the amount of money you think you’re going to need because it just disappears really quickly, especially if you’re trying to build a brand.

Surround yourself with great people and constantly ask questions. Know your market and your audience.

Know your end goal but be flexible. Be able to pivot if you have to and make sure you have the finances to support those changes.

You’ve teamed up with Akshaya Patra Foundation to donate one lunchtime meal to children when people buy Nom Noms. How did this partnership come about?

This is such a cool story, because all what happened was I went to a networking event, and met someone from Akshaya Patra Foundation. Some children can’t go to school, because they need money to buy food. This foundation makes food for kids and distributing to schools. I took the brochure home – and at that time my son was three years old, and he was flicking though and he was asking me all the questions as he going through that ‘why’ stage. ‘Why are these children sad? Why are they at school?’ At the end I asked him, ‘what do you think we should do?’ And he said ‘can we send them some food please mummy?’  I thought that’s exactly what we’re going to do. In fact, we’re going to sponsor an entire school of 400 children, and guarantee that they get a lunchtime meal. The idea is that when they go to school they can focus on getting an education and not worry about being hungry. We want to be able to contribute and make a valuable difference in a child’s life.

I do like Gail’s. I used to live in Hampstead and I used to love walking around the heath and popping into Gail’s afterwards.