Aktar Islam, a Michelin-starred chef at Birmingham’s Opheem, has many strings to his bow, coming in first in the BBC TV series Great British Menu in 2011, and bagging his first Michelin star in 2019. With Birmingham facing tougher covid-19 restrictions, we chatted to Aktar about the challenges Opheem is facing during the pandemic, his love of food, and inspiration behind his highly-praised menus:

Hey Aktar! Congrats on your Michelin star last year – how was that for you? 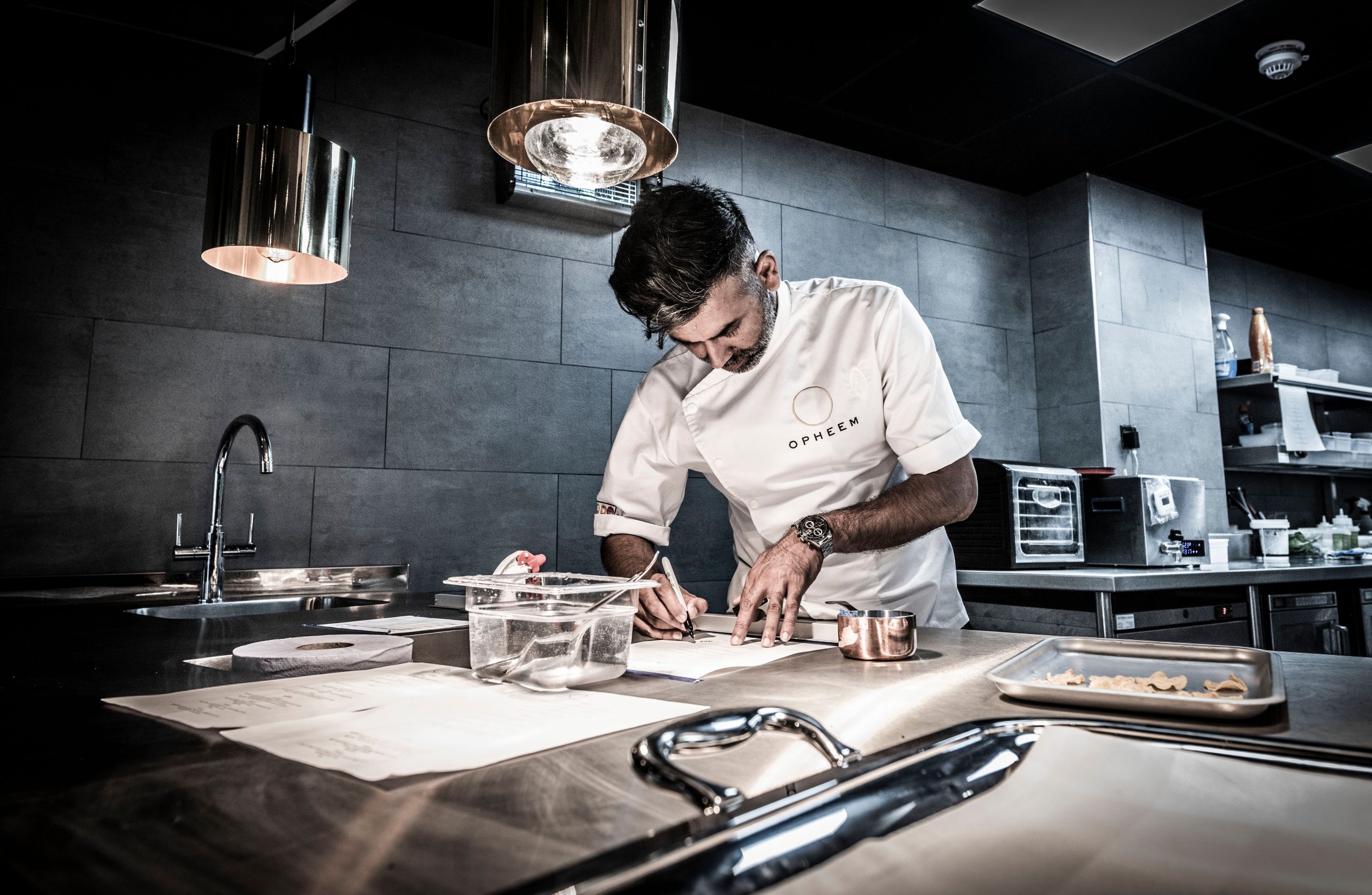 Thank you! It was incredible, to achieve a star within our first year and to be able to say that we are the first and only Michelin starred Indian restaurant in the UK outside of London is a great achievement for us and for Birmingham.

I’ve been in the industry for 27 years, and this is something I’ve always dreamed of. A few years ago I realised that the only way I was going to turn this dream into a reality was to shake off all those who were holding me back and build a new restaurant that was true to my vision, cooking philosophy and surround myself with people who shared the same values.  When I opened Opheem it was a very bold statement, I put my name on the door so there was no ambiguity about what people should expect when walking through; this was my life represented on a plate.  Everyone in the city was behind us and we’re proud to say we were able to deliver on our promise.

Tell us a little bit about your restaurant Opheem – what’s the inspiration behind the menu?

The cooking at Opheem is inspired by the forward-thinking chefs of antiquity, I read a book called the Nimatnama which is a manuscript from the 15th century written by the Sultan of Malwa (central India).

The recipes in the book were awe-inspiring – to think about the levels of detail the chefs went to in order to create the recipes, seriously intricate cooking.  That got me questioning the current state of Indian cuisine and I made a conscious decision to shape the next evolution of a cuisine that has several millennia of history just like the chefs from the royal courts had been doing hundreds of years ago, but now the future of Indian cuisine would be shaped from a kitchen in Birmingham. It’s so flattering to get messages from chefs cooking Indian food from all over the world who take interest and inspiration from what we do.

Have you always wanted to work with food? 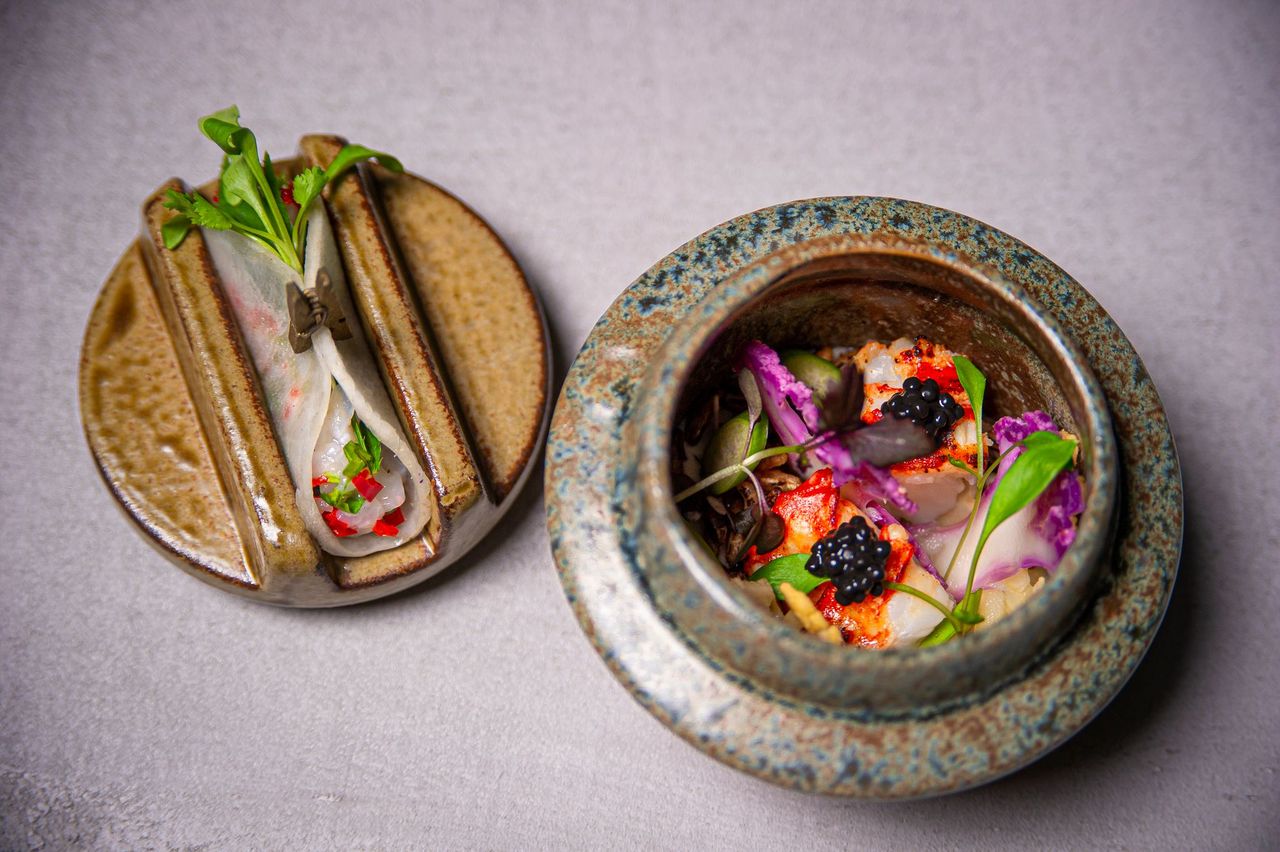 Food has always been an integral part of my life, I know that’s a sentiment that can relate to every human being on the planet but my life has always revolved around food. I’ve never really taken part or interest in any sports growing up as I was always preoccupied with food whether that be cooking with my mum or spending time at my father’s restaurant.

At family gatherings, you’d always find me in the kitchen which turned heads as traditionally it was the domain exclusive to the women in the family.  I guess though all those who thought it was odd now look back and realise I’ve put all I’ve learned into good use.

What ingredients do you enjoy cooking with the most?

There’s nothing in particular that would stand out, I enjoy cooking with the seasons which is actually something that makes us truly unique when it comes to representation of Indian cuisine in the UK and as a whole. We’re the only Indian restaurant in the country that faithfully follows the seasons and tailors menus to celebrate the ingredients from the British isles; we work with gamekeepers in game season, day boats from the Cornish coast, to the divers from the OrkneyIsles for our scallops and the plethora of small farms and independent producers that supply us.

How would you best describe the food being served at Opheem?

The best way to describe what we do is to refer to it as ‘progressive Indian,’ we look at all the influences that have made up Indian cuisine as we know it today, then we explore those influences further and expand on that with a combination of modern cooking techniques combined with traditional practices. You can often have components on one plate that are separated by a 1,000 years and more.

We concentrate on seasonal tasting menus that combine great British ingredients that are at their best and within season with influences from the Indian subcontinent either from contemporary India or by delving into the culinary heritage of India. Throughout the summer months we take a lot of influences from southern India, the coastal regions and West Bengal where the food is lighter and fresher and then moving into winter we move up to northern Indian territory and also really start to explore the Persian influences in Indian cuisine going back several hundreds of years for richer, indulgent and aromatic sauces.

It really is a truly unique representation of Indian cuisine, as its a very personal journey for me and my team, what we do at Opheem you won’t find anywhere else in the world. It can’t really be compared to any other Michelin starred Indian restaurant as they all tend to follow the traditional curry model and can be region-specific as for us we’re a bunch of Brummies looking at this cuisine from afar so are not really pre-programmed to cook in a particular way.

For example, a simple snack that we did recently was based on a savoury macaroon, this had a smoked eel korma filling among other tasty goodies, it was incredible and truly a world first.

Opheem is known for its elaborate tasting menus – how long does it take to come up with the dishes? Have you ever tried combinations that haven’t worked? 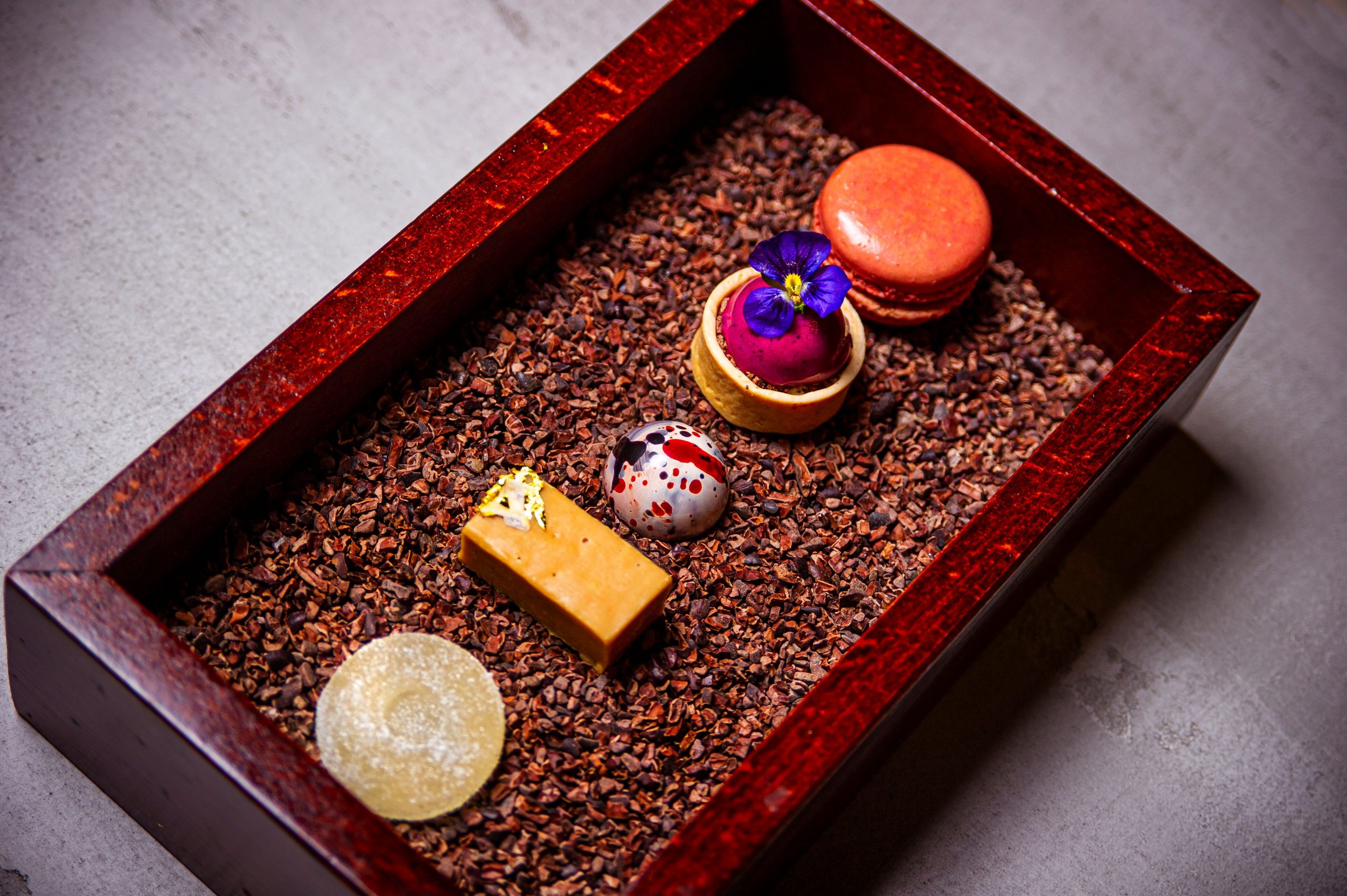 Development is a constant pursuit, it’s an ongoing process we often start preparing for recipes months ahead. For example, last summer we did a fermented green strawberry and red pepper Mr Whippee as a little snack – the process for that started just as we were getting green strawberries which we then fermented for 8 weeks. We’re always thinking ahead preparing for the ingredients that are due to come into season whilst the research element is a daily activity.

The process is quite natural to Neil and I, pretty much a way of life, so we don’t really notice the passage of time to develop a particular dish. I think when you’ve cooked for nearly 30 years you get a natural understanding of flavour/texture combinations that work so the process in general really is about refining the components. Our menus can be as long as 16 courses though we advertise at 10 courses because we have so many ideas and we just love spoiling our guests.

It’s a very challenging time in Birmingham at the moment due to coronavirus – how is the restaurant/team coping?

Boris and his band throw grenades at us on what feels like a weekly basis, I totally understand the need for action but the figures show that hospitality isn’t a problem with less than 4% of transmissions going back to hospitality venues. We’re having to adapt on a weekly basis based on variations or updates on guidance. Obviously, it’s a scary time for everyone in hospitality and we’re no exception.

We had planned to open another restaurant in the city this year but have put those plans on hold as we’d opened our last restaurant in March just before the lockdown. It’s a shame as it would have created another 50 jobs for young Brummies, a city with a very young population and desperately in need of opportunities for the under 25.

I’ve started an at-home service called Aktar at Home where we send out a box with a weekly selection of 8 to 10 traditional Indian curries with breads and snacks. The box ends up weighing in at around 7/8kg as we believe in being generous! The idea is that the box pretty much looks after 4 to 5 nights worth of evening meals for a couple or two nights for a small family. Throughout lockdown, I realised how expensive the orders from takeouts can be so this is my way of giving back to the community that has supported me throughout my career.

Birmingham is known for its incredible selection of Indian restaurants – has does Opheem differ from others?

Birmingham is known for its love of British curry and for another invention the Balti – it’s fair to say we’re known as a city for our love of spice.  The experience at Opheem is unlike any other Indian restaurant in the world; the guest’s journey is totally unique, our approach to gastronomy is totally unique in the field of Indian cuisine.  Guests who have dined with us will say that they’ve never experienced flavours from the Indian subcontinent as they have at Opheem. As humans, we are totally unique and in that vain, as Opheem is built around my vision, it makes what we offer here totally unique too.

We’re really lucky in Birmingham and it’s hard to pick out favourites but if I was to shout out a few it would have to be Carters of Moseley for some seriously good relaxed fine dining, Tiger Bites Pig for our weekly bao fix, Bonehead for fried chicken, Meat Shack for seriously dirty burgers and Otto for pizza! But there’s so much more that the city has to offer, I’d always recommend the independent places as they really represent our city. 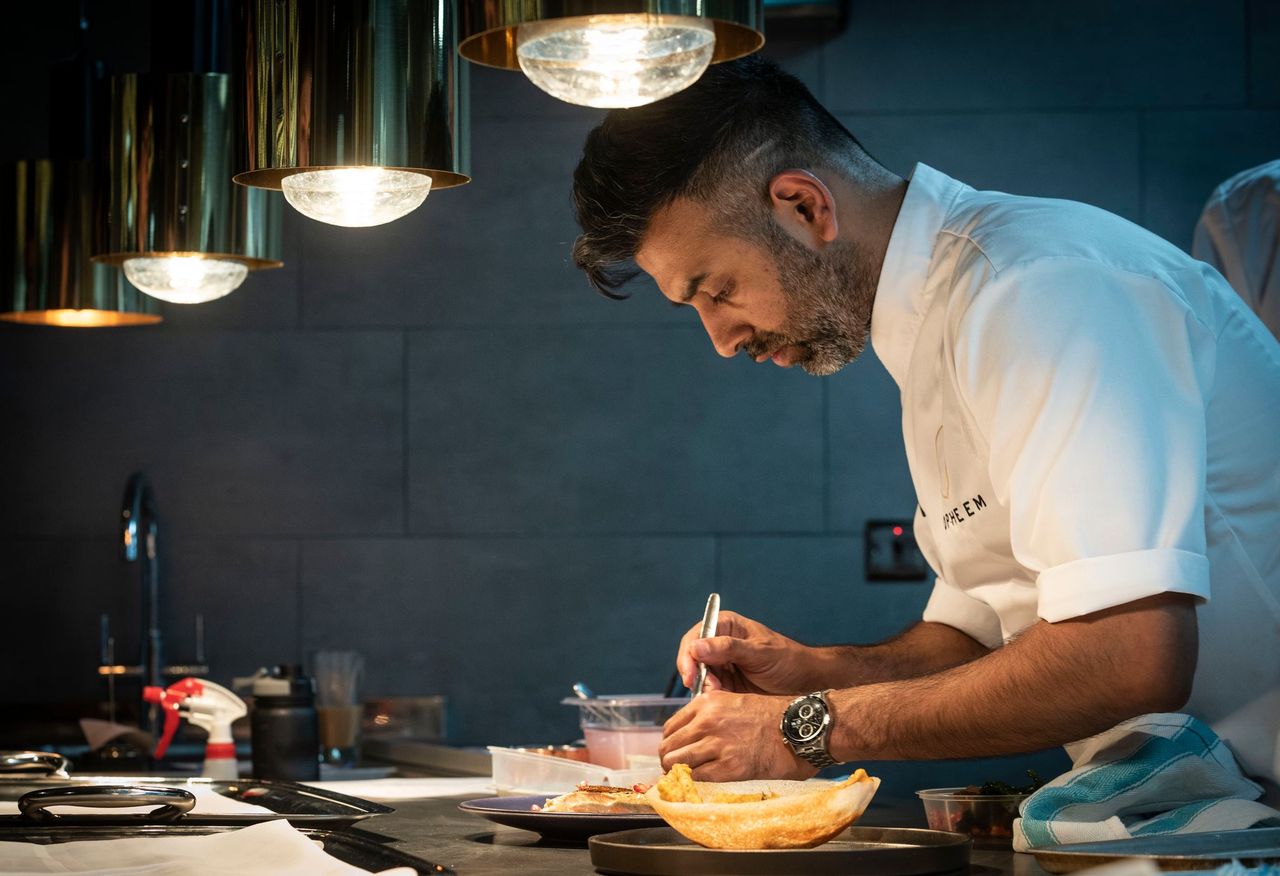 The best piece of advice that I’ve ever received is “make it happen as no one else will do it for you” ultimately you can wait your whole life waiting for the right opportunity to land on your lap or you could do it yourself.

It’s easy to procrastinate and blame the universe for the cards you’ve been dealt or you can take control and shape your own destiny. I was born of immigrant parents in one of the most deprived areas in the country, but I chose to make a change to that and today I can say that I’ve invested millions into the city and have helped create opportunities for many to start their journey and make there dreams a reality too.