Life / Commentary / About Time You Met: Mark and Sue Stinchcombe

About Time You Met: Mark and Sue StinchcombeBy Alicia Grimshaw

You can’t help but love Masterchef: The Professionals – a programme which sees chefs from across the country give it their all each week, cooking in high pressure environments and constantly pushing the envelope with inventive dishes. This year, Mark Stinchcombe claimed the title thanks to his three course meal which included fillet of beef with a bone marrow crust and glazed beef short rib. We sit down with Mark, and the wind beneath his wings, his wife and fellow Head Chef at Eckington Manor, Sue Stinchcombe. 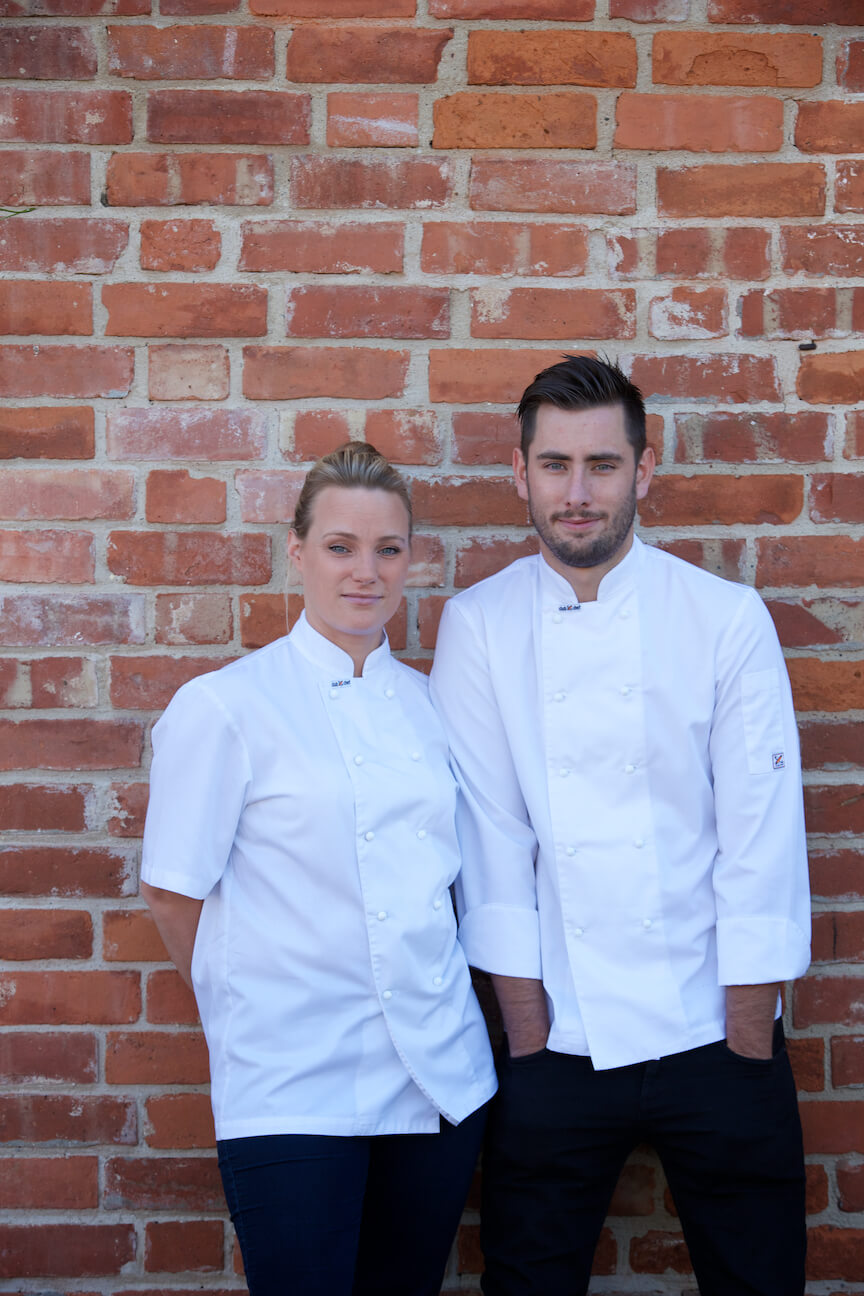 What can people expect from the menu at Eckington Manor?

Sue: We’re lucky enough to have our own farm, so the menu is always going to showcase the lamb and the beef, especially the beef. We’ve got our own orchard and we’ve got our own allotment – so in the summer, we’re 90% self sufficient. We diversify the menu with what is literally coming out of the ground. It has been amazing for us, we have all the heritage carrots planted for us, and once they stop, they stop. It makes you very much governed by, not just the seasons, but what is being grown, We use local where we can, and we’re both classically trained and we try and put our own stamp on it. We’re bit tongue in cheek with some of the stuff we do and the way we write the menu is very loose. We try and exceed people’s expectations.

Why do you think traceability and using British produce is so important now?

Sue: I think because now you can get anything, anytime of year. You can get strawberries on Christmas Day if you wanted. Everything is so accessible, but it doesn’t mean it tastes any good. To have the produce at its very, very best is paramount to making the best dishes.

What was the one thing you took from The Masterchef experience?

Mark: I got amazing friends out of it, some people who are life long friends now. We keep in contact pretty much every week, and we text each other regularly. It was an amazing experience and it really puts yourself out of your comfort zone. Being behind the stove and cooking is what I really love doing – but pushing yourself that little bit extra against amazing talents was the reason why we went into it.

What are your food trend predictions for 2016?

Sue: If Masterchef was anything to go by, I would have to say honeycomb.

Mark: Last year was all about femented food.

Sue: I still think that has some legs to it. You’ll definitely see more of femented foods.

Mark: It has taken off through the Nordic scene. People are trying to bring these fermented ideas, but don’t necessarily know what they’re doing. Kimchi. Everyone loves kimichi. I would have to say Korean food.

Sue: We had a kimchi mayonnaise, I’m still yet to try this and put my own spin on it. It was amazing. We tried it, and I thought – I really like that. We do like a miso mayonnaise, and that’s quite similar.

There are a lot of components to your dishes – how do you set about creating them? 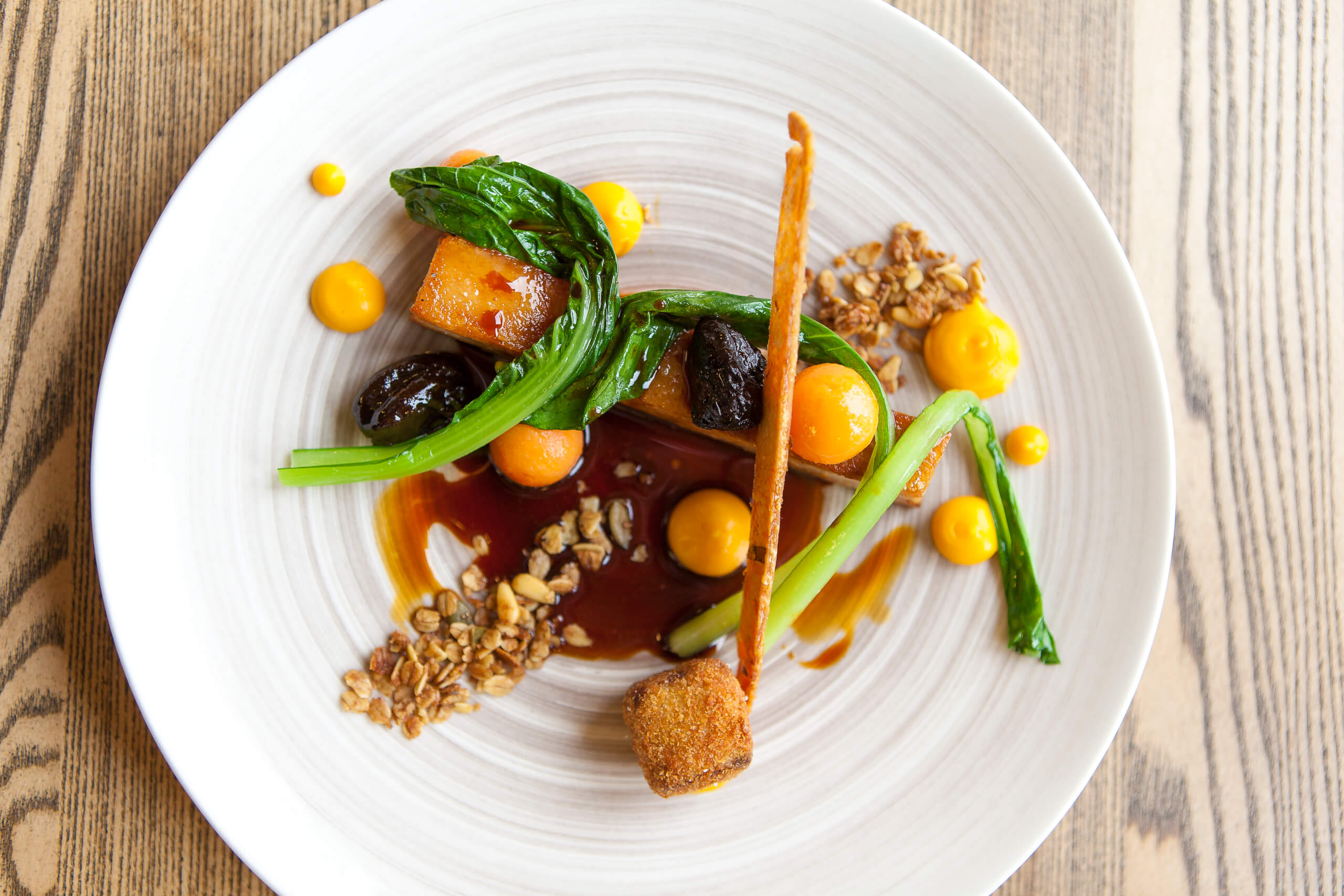 Sue: On our days off, we try and go out, not every week, but we try and go and eat in a lot of places that we try and aspire to. You can’t reinvent the wheel, so you have to sort of bring your own twist to it. We read a lot of books, both old and new. And, between us we’ve worked in a lot of different places and I think one of us will start off and we’ll both add in what we think works.

Mark: If you take rhubarb for instance, you think what goes with rhubarb. So we know that ginger works well, and how can we do a different spin on it. So we create ginger ice cream.

Sue: We vibe off each other quite a lot. We are really lucky that we have such a strong partnership.

Have you ever created dishes that haven’t worked?

Mark: When we were practising for Masterchef and we were on such a tight time scale to create these dishes, you kind of create something and I was like ‘we’re going to run with this, I haven’t got another choice’ and Sue was like ‘no, it’s not right’.

Sue: It wasn’t him and it wasn’t us, it was just because our backs were up against the wall.

Mark: When you get the finals, Mark went out and you have to then write your recipe for the chef’s table. We kind of had the dish in our head, but you write it there and then. You write it whilst Mark is leaving, so for them to get the orders in for the Sunday, then the Sunday happened, then you go to the final. That’s when they said we need your final dishes.

Sue: The thing is, you haven’t thought about your final dish. You only thing we said was  – let’s do beef. We’re really proud about the beef we serve here, but we had no idea what we were going to do with it. It’s like writer block, if we’re not in a good place or stacked out with work – you’re not going to create a good dish. When we were getting married, all this was going on. We got married in October, plus all the Masterchef stuff, and plus we were really busy with this place. When you’re in a good place, and I think that’s why were cooking really well now. We’re flowing really well, the ideas are coming.

Mark: We’ve had a nice year this year.

Sue: You have more chance to let your imagination run. Sometimes you revert back to a dish you’ve done and you tweak them. You don’t want to put out something that is not 100%. You can only do that occasionally, but you can’t keep doing that as you never move forward. People get bored, but you can have favourites that you can adapt and evolve. 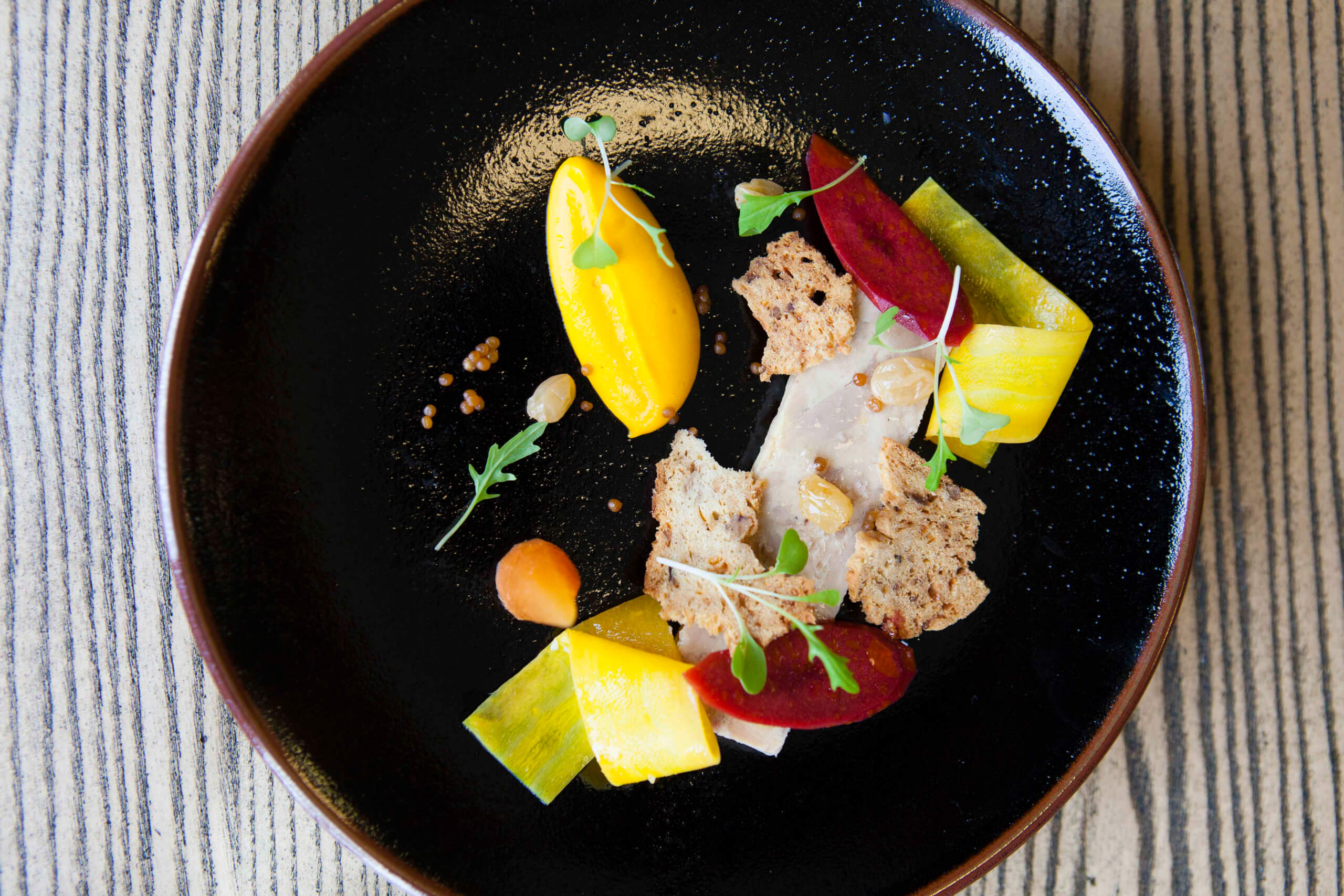 Sue: Just to really showcase what we’re doing. The thing is now we have this massive springboard, but now the hard work starts because we’re riding an amazing wave at the moment, and we’ve got people coming through the door who have seen it and have pre-conceptions.

Sue: Lots of people booked in when they saw the first couple of episodes and they said ‘he’s going to win’. That’s really lovely and you can’t ask more than that. That’s so nice and it’s really flattering. They can’t book now as they can’t get in. Our system crashed on Christmas Eve because we had so many emails and phone calls and Mark’s twitter went mad. 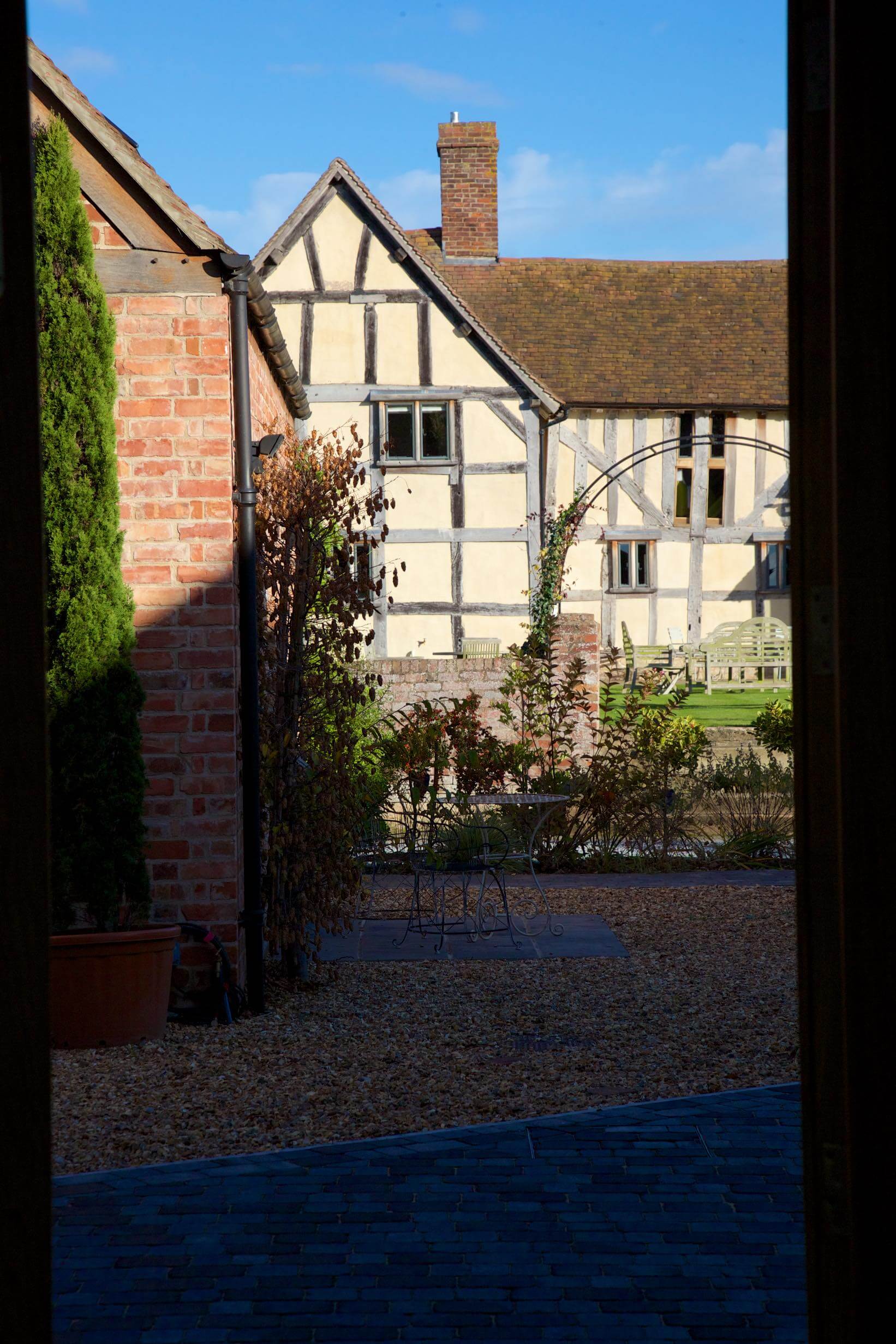 Mark: Nick set me up on Twitter the day before the final. I had 60 followers before the show started and now I have 6,000 odd. Loads of people message me and say ‘I’m coming up and eating’.

Sue: It’s really lovely. The bit that I really like is that people are coming through the door who have watched the show actually see how much hard work it really is. The tears and the shaking, the anxiety and the emotion that goes into it. They see these people’s lives go through, well some people went though hell, some people are lucky enough to be the winner. I think people actually buy into how hard that is and they really appreciate what you put yourself through. Ours was to put the place on the map and that’s what it has done. But it’s a gamble, it’s a massive gamble because you’re putting yourself up on a massive peddle stool and you can get shot down if you don’t perform well.

Why did you decide to enter?

Mark: I actually saw a friend post to his own sous chef, who was on Masterchef the year before. I never really followed Masterchef massively. I always watched when they went abroad as that part really interested me and it was always the final. I actually thought this was quite a good way to broadcast yourself and we kind of talked about it and it was at a time that we could actually do it.

Sue: Little did we know it would take over our lives.

Mark: This year we might have been busier and it wouldn’t have been possible just to go down and do it. This year we were fortunate enough that we were in a position to go and take part.

Sue: We’ve always done that, right from the start. We try and do it as much as we can – it gets a bit sporadic throughout the night, but we always, always try to go out once during the night. It’s our personalities on a plate. There’s a team in there, there’s 4 of us and we really believe that that’s the right thing.

Eckington Manor is a 5 star country bolt hole in Worcestershire that includes a cookery school and 17 luxury bedroom suites. Eckington Manor won Gold in Taste of England category at the Visit England Awards for Excellence 2016. For more information, visit the website here.