Bikes, beats and boom is the name of the game at one of London’s most popular spin studios, Boom Cycle. Not just your run of your mill gym, the spin classes are high octane, sweaty, but most of all, fun. We caught up with co-founder Hilary Rowland to chat fitness, the Boom Cycle journey and future plans.

Tell us the journey of Boom Cycle – how did the idea come about? 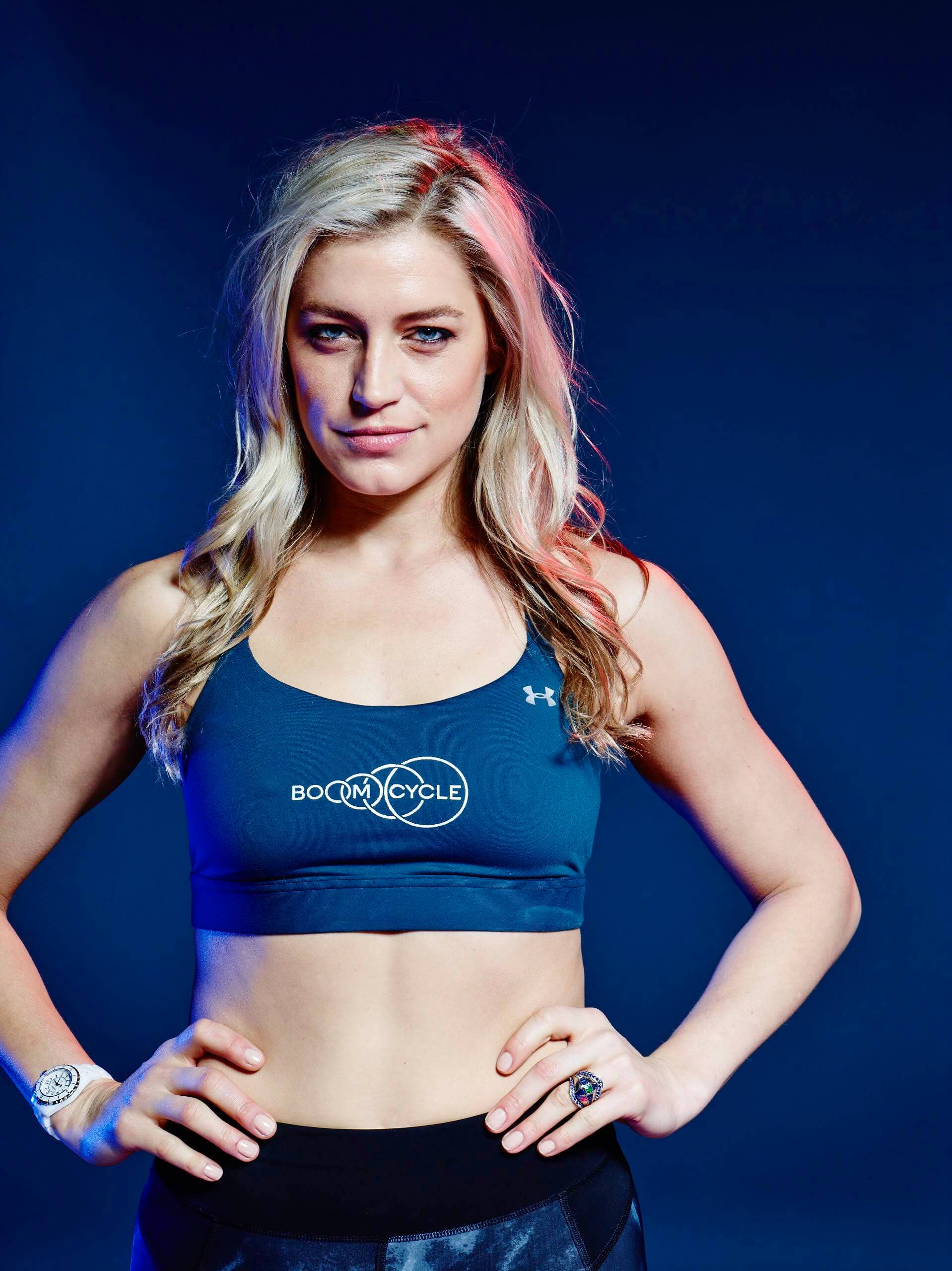 When I first moved to London from modelling in NYC in 2004, there wasn’t a great deal of good spinning classes on offer; there were a couple gyms that had good classes, but they were few and far between. From there, I saw a gap in the market. It was something I wanted for myself so I thought, if I want this, other people must want this too. A few years later, when I decided to put roots down in London no one had done it yet, so we opened the first boutique spin studio in Shoreditch back in 2011. We had our ups and downs like any new business, but through some blood, sweat and tears we managed to raise funds and open our second studio located in Holborn in 2014.

Having 2 studios compared to 1 came with a large learning curve. We eventually got the swing things and started seeing massive growth in 2015-2016. We started actively looking for more locations and opened Hammersmith and Battersea as well as a residency at The Curtain members club to take the place of our original Shoreditch studio this year. At the same time as launching these 3 locations, we purchased a competitor studio near Monument in the City which we plan to open in January 2018. We are super happy with our new locations and as our foot print and community grow, we are facing the new challenges that come alongside growth with open arms.

For anyone who has never heard of Boom Cycle, can tell us a little bit about the studios and its philosophy? 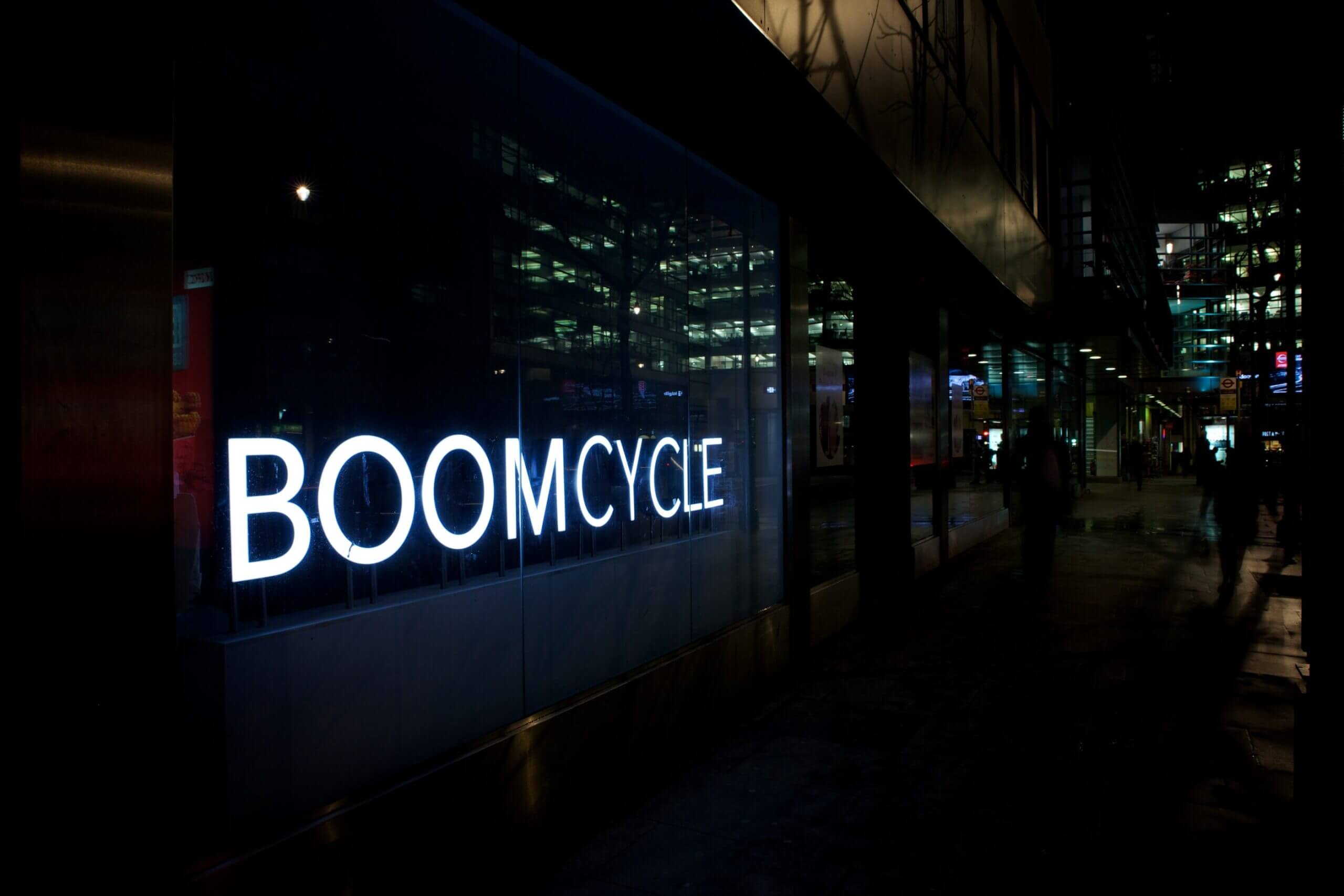 Boom Cycle welcomes everyone. We are totally inclusive and the product we offer is an immersive fitness experience built on fun and empowerment. We don’t use measurement or numbers of any kind. We find that by allowing people to let go for just a short time they can really get the best out of themselves in more ways than just the physical. There are obviously great fitness benefits as well and sweat. Lots of sweat. We also focus on supporting a real, attainable balanced lifestyle. We live life all the way, we eat burgers and drink matcha, we stay up late dancing all night and go to bed early! We work hard, play hard and we also take time for ourselves.

Why did you decide on spinning over other physical activities?

For me, riding to the beat is so fun – it’s like dancing. When your track comes in and you’re on the dance floor, you just dance, and dance as hard as you can – you don’t feel tired and you don’t think about anything else! It’s effective for fitness, toning, escaping for a few minutes of ‘me time’ and the icing on the cake – that endorphin high.

What makes Boom Cycle different to other spinning studios in London?

We ride in the dark, to large nightclub quality funktion-One sound systems. No numbers, no competiton, no pressure. Just fun.

What do you think of the health and fitness scene in London? 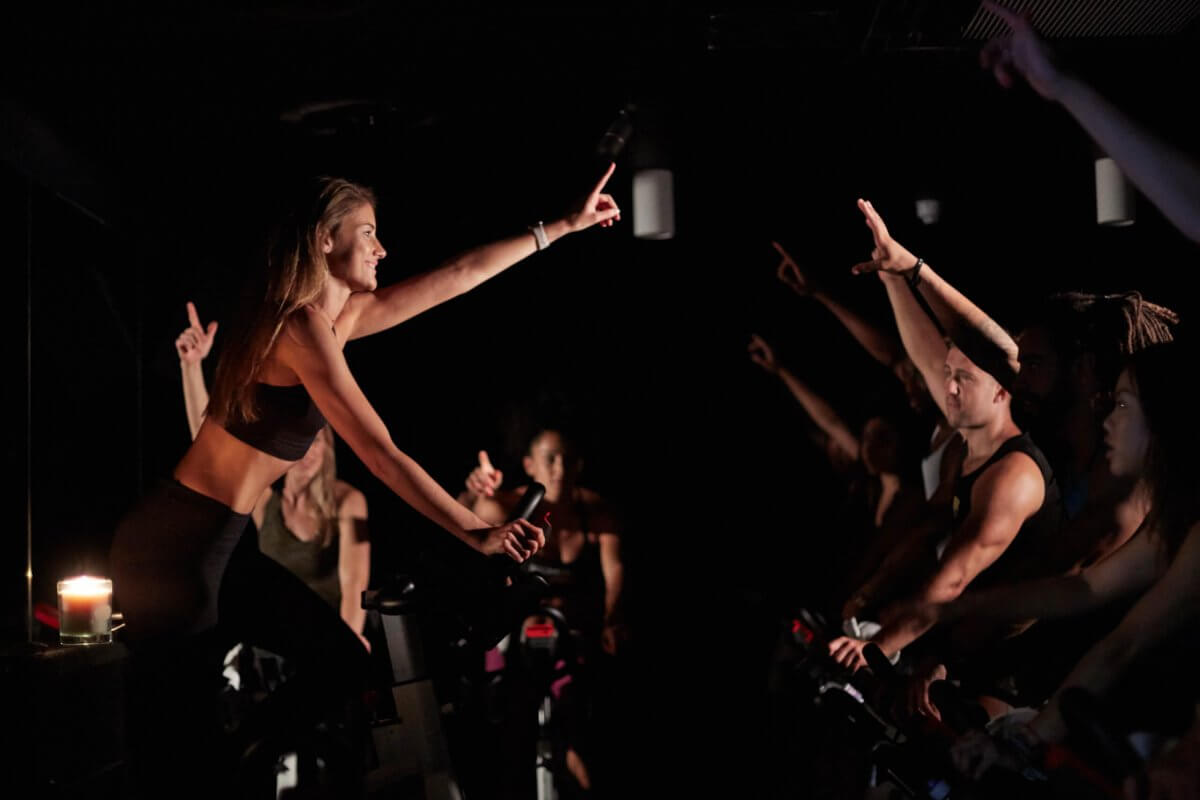 The health and fitness scene in London is both flourishing and growing. More and more things are popping up every day. People just need to be careful to remember that fitness should be something they enjoy, for the purpose of feeling better mentally and physically, rather than a pressure for aesthetics.

What is your advice to people who are looking to explore new ways to get fit?

Try it all and keep trying things until you find something that you enjoy doing so you can make it part of your lifestyle. If it’s a chore all the time and you don’t look forward to it, you’ll find it hard to keep doing it regularly.

Congrats on the new openings in Battersea Power Station, Hammersmith and The Curtain members club – what can people expect? 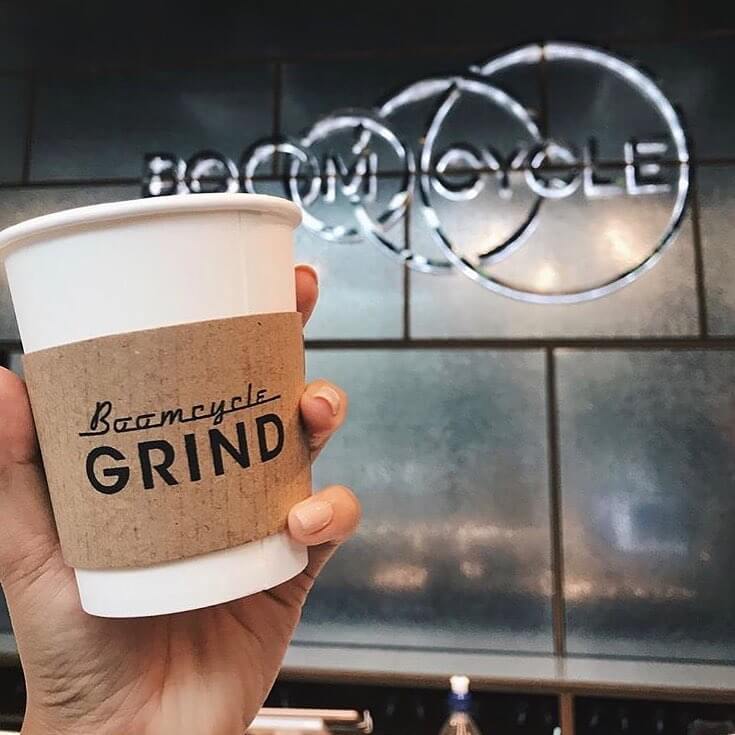 Our new studio locations in Hammersmith and Battersea are larger and airier than ever before with lots of natural light in the areas outside the actual studios. We have Grind coffee and Jing tea on offer at both, and plenty of room to sit and work and soak up the positive vibes; whether you’re in for a ride or just stopping by for a flat white or one of the freshly made Boom Cycle recovery shakes. We also have some rocking leisurewear on offer and high fives for days! The Curtain is beautiful and a very special place, and we hold our rides in the performance space and the sound is off the charts.  We’re so pleased to have our residency there!

What advice would you give people who haven’t tried spinning before? 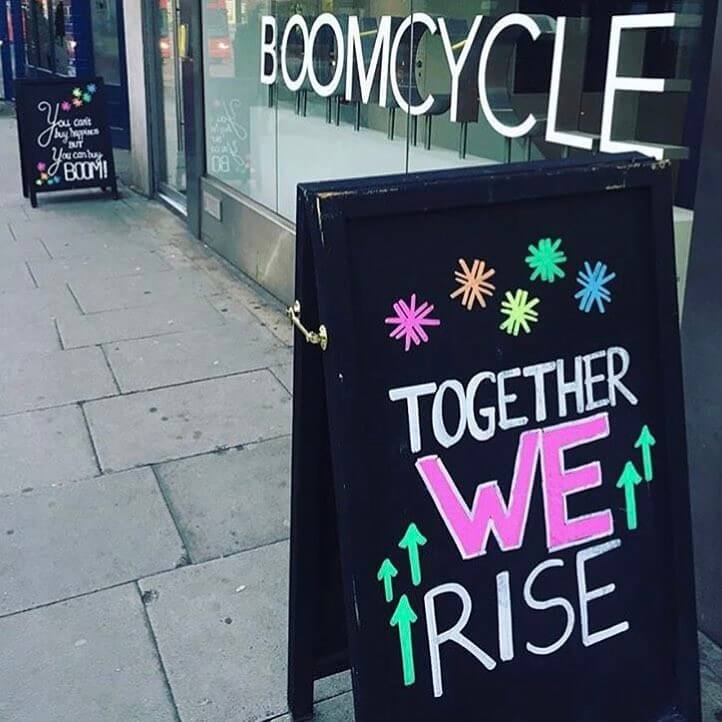 Arrive early. At least 20 minutes. If you rush into a ride, chances are you will not have nearly as good of a time as you would if you get set up correctly and go through some basics with the instructor. The first 1-3 rides are all about getting used to the bike and getting lost in the music – you’re not supposed get all the moves. Most people find it to be a totally different experience to anything they have every tried and totally not what they expected (it’s not as scary as they thought). Riders get noticeably stronger from one session to the next.

After we open Boom Cycle Monument in the City in January we want to focus on our communities at each location, and  aim to bring more fun, events and AWESOME to the studios for our riders.

Where do you go to switch off in London? 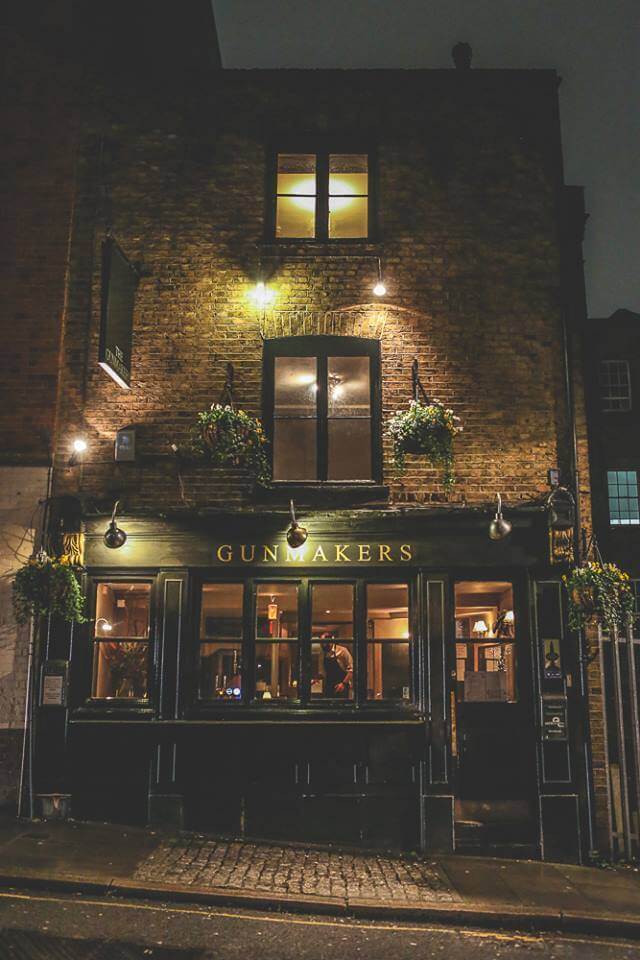 In London, I like to kick back at an adorable little pub in Clerkenwell called the Gunmakers. It’s just chill and we always have a good time.

What’s your go-to breakfast dish if you’re at home?

It would have to be my homemade green juice made from kale, spinach, cucumber, ginger, green apple and lime, and scrambled eggs with avocado.

I’ve recently discovered a restaurant called Ceremony in Kentish Town. I’m not even a vegetarian, but it’s so good. I’m obsessed with the crispy duck egg with wet polenta and wild mushrooms.