Real Kombucha are changing the conversation and proving kombucha to be the one of the most sophisticated non-alcoholic alternative to wine. After quitting alcohol a few years back, founder David’s obsession with brewing kombucha as an alternative to his previously beloved wine and beer was the founding of Real Kombucha.

Now stocked in over 30 Michelin-starred restaurants, even being served by top sommeliers as a ‘wine flight’, including The Fat Duck, Real Kombucha is fast becoming the non-alcoholic alternative. We chatted to David about starting Real Kombucha, brand awareness, and the now crowded kombucha market:

When did you first try kombucha? 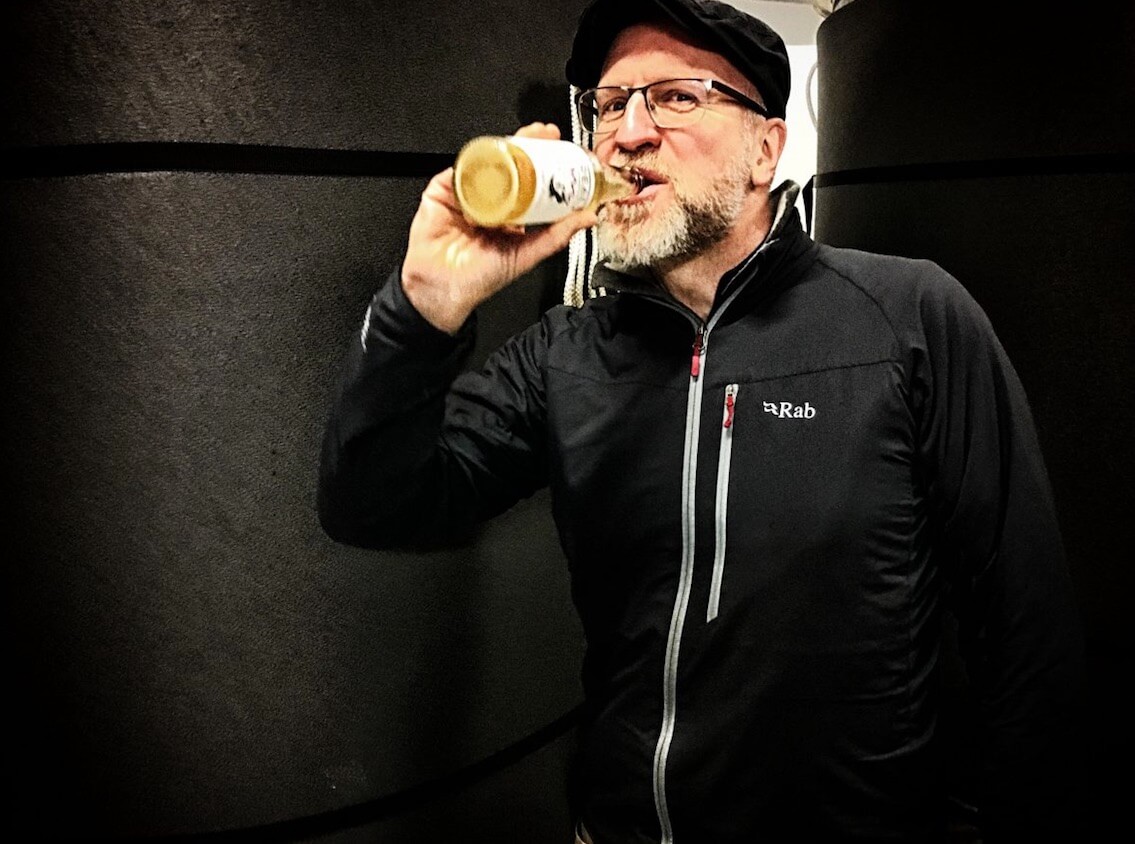 I first tried kombucha when a great friend of mine passed me a glass of his home brew across the table over dinner. It was absolutely love at first sip. I couldn’t believe that his full flavoured brew was non-alcoholic. So he gave me some kombucha culture to try brewing my own. And my obsession commenced!

I had (almost) given up alcohol a couple of years previously. It wasn’t for any particular reason apart from it just seemed to be slowing me down. As my wife is French, and her family is equally split between Burgundy and Bordeaux, we have always had some great wines in the house. But since being off the alcohol there was a really big hole in my foodie life. Water just doesn’t cut it with a great meal.

When did the first idea for Real Kombucha come about? 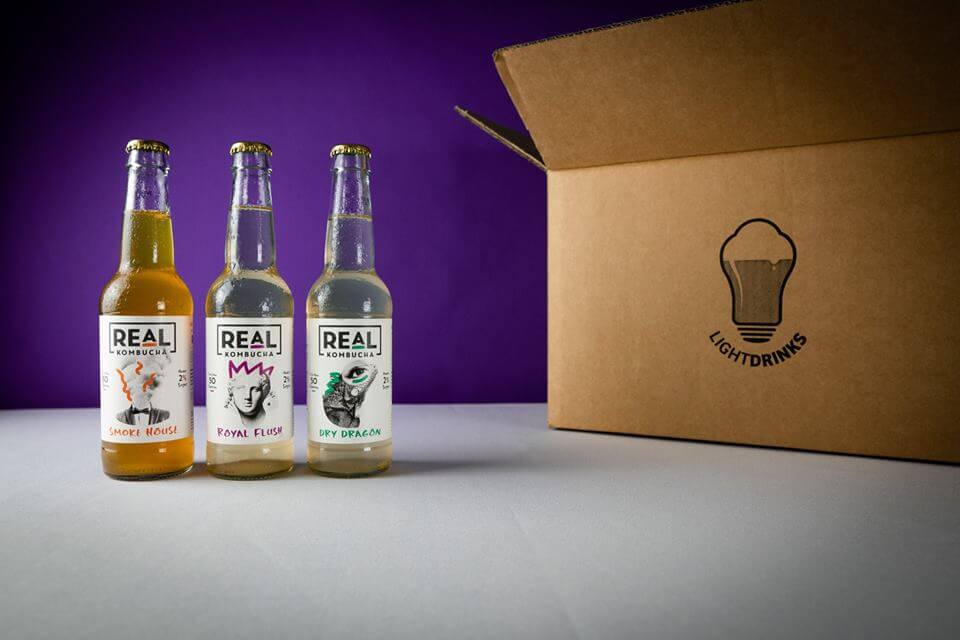 My first brew was quite serendipitous; we had been in India a couple of years before with the kids, and bought some great teas in Munnar in Kerala. Without really knowing much about tea at the time, I dropped some Silver Needle tea, one of the most exquisite (and expensive) teas in the world, into the brew pot. And after a week or so I got the most amazing flavours of rose and vanilla coming from the brew. Tea, as it transpires, is as complex and as fascinating a world as wine.

We have to date experimented with around 150 different teas. We work with an incredible tea master, Will Battle, who wrote The World Atlas of Tea, to identify and source our teas. He has introduced us to an enormous variety of teas and educated both our brains and our taste buds.

How did you get people talking about Real Kombucha?

I think people have been looking for something to fit the non-alcohol space for some time, whether they’re in the F&B industry or they’re customers walking into bars and restaurants. We’re working in a space that is very much in the national conversation: alcohol alternatives are a huge talking point at the moment.

Properly brewed, kombucha has a flavour profile that sits somewhere between a delicate champagne and a light scrumpy cider. Most people would think they are drinking an alcoholic beverage when they first try it. It’s the perfect alternative to wine, beer or cider, whether it be alongside a great meal, supping it at a fancy London bar, or sitting out on a warm evening.

Various research shows that alcohol consumption is collapsing, particularly amongst the younger consumer. Teetotalism in the UK in the 16-24 age group is now up to almost 30%. I find that staggering. And, apparently, almost half of those people drinking in a pub would be keen to have an alternative to alcohol, although maybe only from time to time.

We think kombucha is the alternative to alcohol. I still haven’t found, and I have looked very hard, another beverage that adequately fills this space. There is an enormous rise in the adult soft drink market, but there are few (if any) that have a flavour profile like their alcoholic cousins, mainly because they are not fermented.

After less than a year on the market, it’s stocked in over 30 Michelin-starred restaurants – how did you get people/businesses to believe in the product when you first started out? 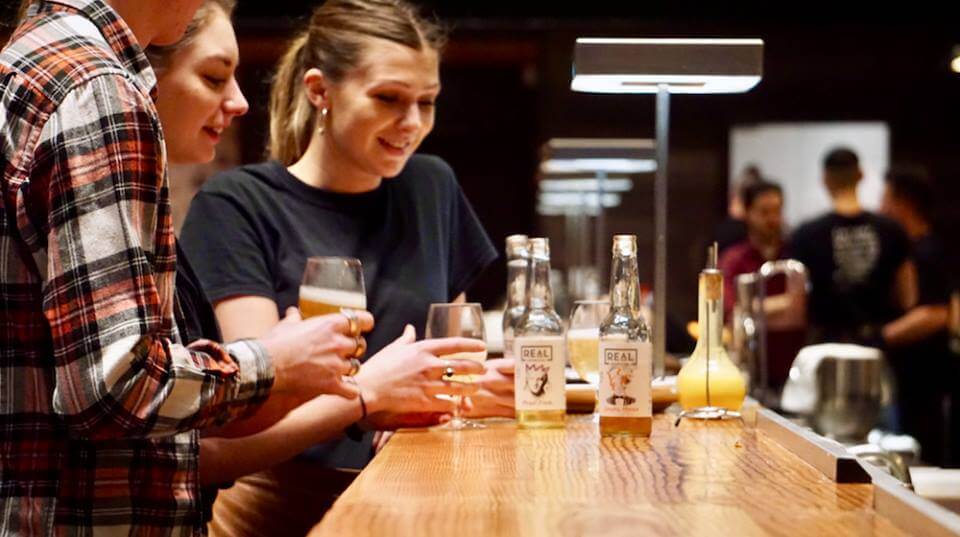 What we hear from all of the chefs, sommeliers and restaurateurs that we work with is that we are the only real non-alcoholic alternative to wine when pairing with food. I was quite surprised when I first heard this, but I have now spent a lot of time looking for other alternatives without any luck.

Fundamentally, it’s the complexity of a fermented beverage that enables good food pairing: the blend of acidity that cuts through fatty foods, tannins that help to counteract sweet foods, and sweetness that softens salty and acidic foods. These are all produced in the fermentation process of kombuchas in just the same way as wines.

All of that said, a lot of our initial success was to do with good old-fashioned pavement pounding. We’re passionate about our brews, and as often as we can, we like to go and work directly with our partners and stockists to make sure some of that passion rubs off. Sure, we spread the word using the digital methods that most people use, but we’re great believers in working the shoe leather and knocking on doors.

There’s been a surge in kombucha brands now in the UK – how do you stand out from a now crowded market?

There are two distinctly different kombucha markets developing in the UK. Those companies that are following the US trend of flavoured kombuchas are providing a great, lower sugar, healthier alternative to a soft drink. These drinks are generally flavoured with ginger, fruits and spices and fit well in the fridge in cafes and supermarkets.

But brewers such as ourselves are focused on producing a high quality alternative to an alcoholic beverage in the on-trade and at home. We are all about sophisticated, alcohol-like flavours that make you feel adult and special on a night out, or over a meal at home.

What’s been the hardest part of the Real Kombucha journey? 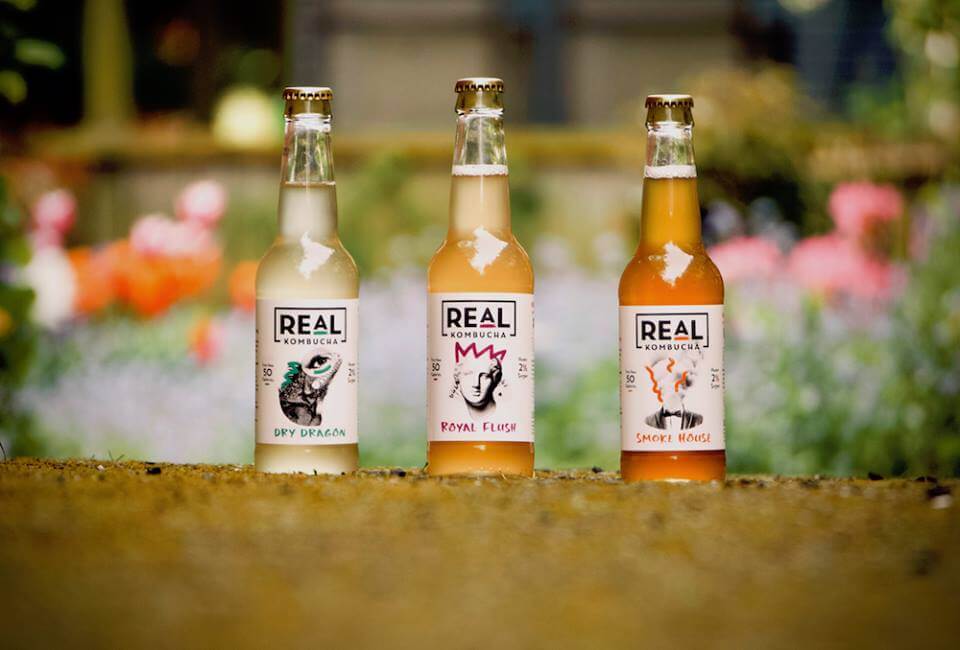 So far, it has to be all the research and development we put in. Before we went to market, we had almost two years of development, having moments where we doubted our ability to achieve the quality and consistency we were looking for. We stuck to our beliefs that we could create something of really high quality; like a fine wine, when all the while the market was taking kombucha down the flavoured soft drink route. It took some real self-belief to hold on during that period.

What flavours are included in the range?

We think of Royal Flush as our full-bodied white wine or champagne. As it’s fruity and bubbly, it’s a great replacement for champagne or prosecco as a celebration drink or as an aperitif. We brew it from First Flush Darjeeling, known in India as the Queen of Teas. The first two tips of the tea plant, picked as they emerge in the first bloom of spring, are dried carefully to tease out a character closer to a delicate white tea.

Our Dry Dragon works as a really dry Sauvignon Blanc – tart with notes of grapefruit and lemon. We brew it out of Dragonwell pan-fried green tea from Zhejiang Province in China. The fresh leaves are wiped around a piping hot wok to stop the natural oxidation process early. Unlike Japanese green teas, steamed to give a distinct grassy flavour, Dragonwell reveals more complex nutty and straw-like flavours.

Smoke House is our most complex brew. As I said earlier, black teas tend to ferment to give notes of apple and caramel, but we have selected a Yunnan tea that has a delicate smokiness that comes through in the final ferment. The tea is grown in the high mountains of southern China by smaller, permaculture plantations. The growers climb the ancient, fully-grown trees to pick the finest leaves. As you can see, these teas go on a real journey.

What was the tuning point for Real Kombucha? When did the brand gain momentum? 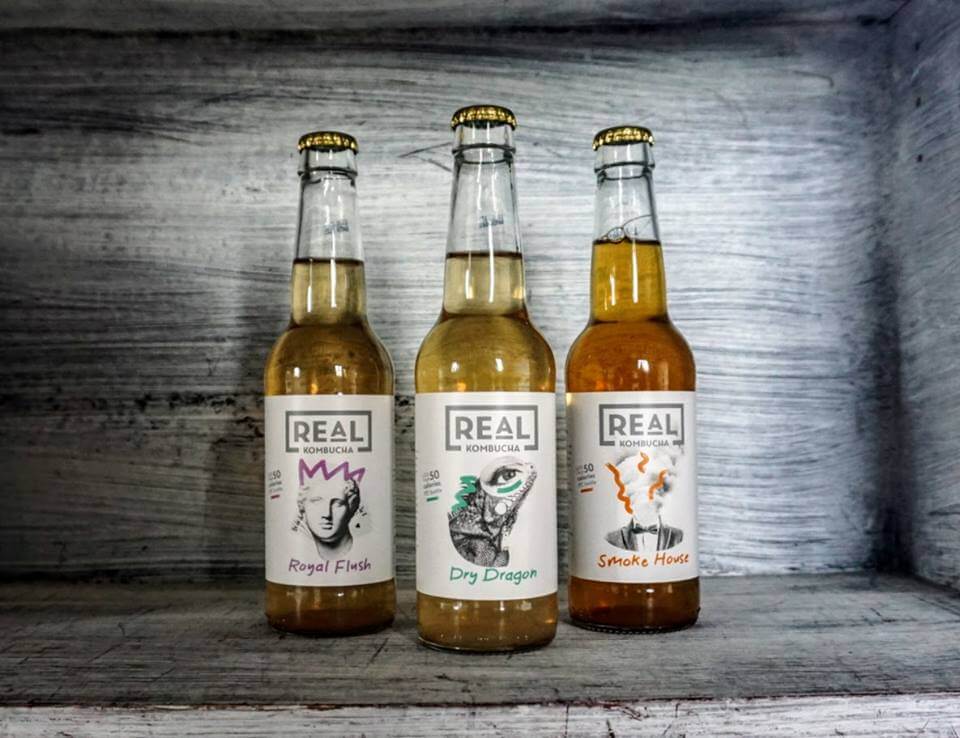 I think the big turning point for us, that both drove our growth, but more importantly gave us real confidence in the quality of our drinks, was being discovered by some of the country’s top restaurants. People like Melania, the sommelier at the Fat Duck, and the restaurateur, Mark Hix, talked about us as the finest non-alcoholic drink on the market. That was an incredible boost for us at a time when we had only just launched. We knew we liked our drinks, but we were not yet confident enough to pitch them at that level.

Since that point we have been taken on by over a quarter of all the Michelin-starred restaurants in the country, many of the top hotels, and we work with many of the best mixologists. But it was the confidence of those first few believers that really got us out there – as I said earlier – knocking on doors.

What’s next for Real Kombucha?

In the near future, we’re looking at international growth. We are already shipping to Systembolaget in Sweden, but we have had approaches from across Europe to Dubai to India to Hong Kong. It’s a series of constant conversations, all of which are very exciting.

After that, we’ll be carefully broadening our product range to give our customers more choice. People already have their favourites among Dry Dragon, Royal Flush and Smoke House, but we definitely don’t plan on stopping there.

For more information on Real Kombucha, visit the website here.