If anyone mentions Levi Roots, you’ll associate him as the guitar strumming, reggae singing Dragons Den contestant who managed to seal £50,000 funding to kick start his Reggae Reggae Sauce business. Pre sauce and microwaveable meals, Roots was an established reggae artist, having released the politically motivated album Free Your Mind in 1998 and later that year was nominated at the MOBO Awards for Best Reggae Act. We sit down with Roots to discuss Dragons Den, Brixton’s food scene and his latest album. Not before we order a cuppa. 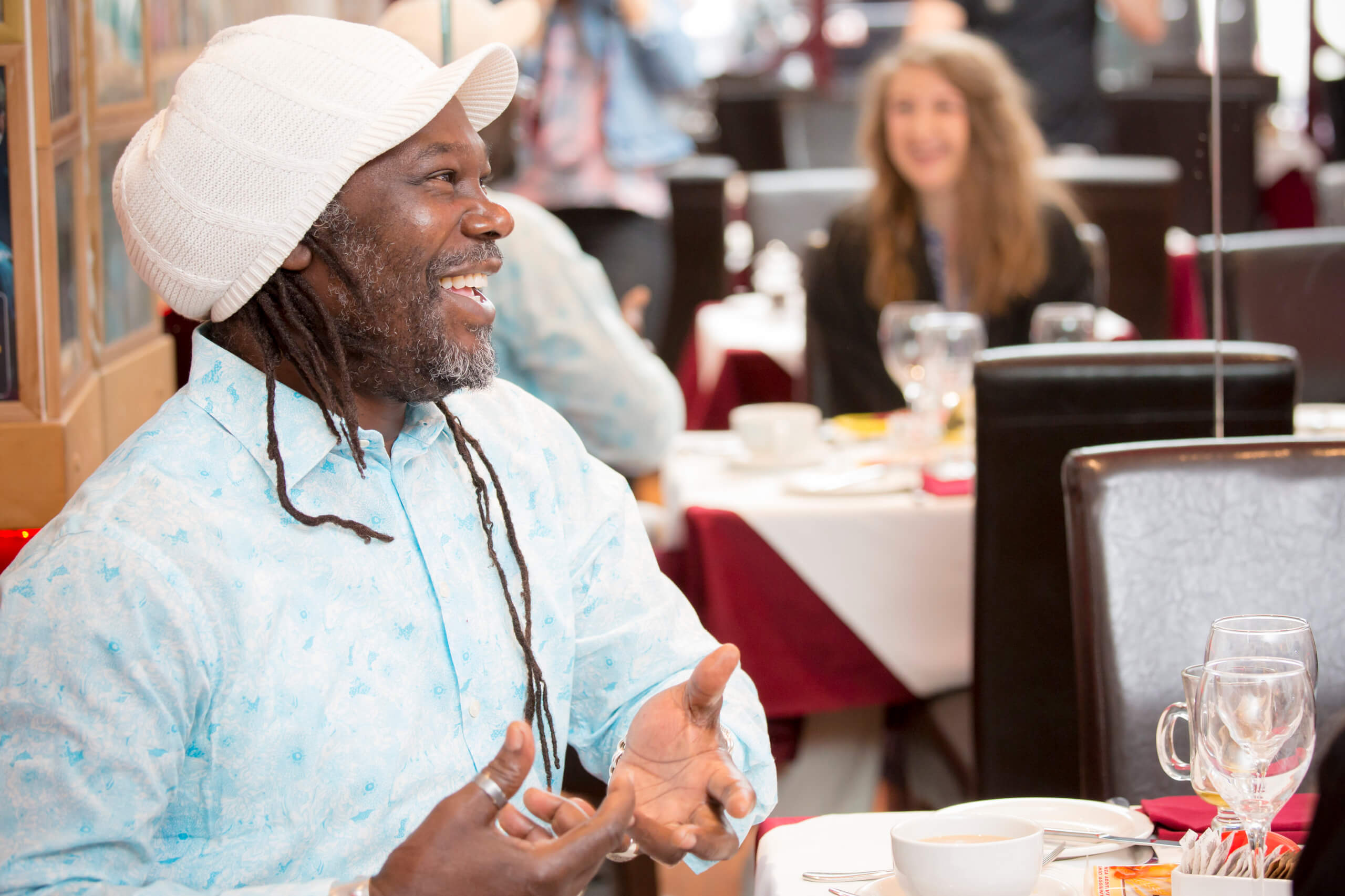 I’m so glad I woke up in music it was the right place for me. The next time I slept I woke up in food. It’s always been the dream for me. I was always in the kitchen cooking and I was always on stage performing – that was my formula. The music is the soundtrack to the food I have to offer.

Tell us more about your new album?

On my new album when I was trying to find the new Levi Roots, I had to  think about these new sets of people buying the products that weren’t listening to my music before, who didn’t know the hell who Levi Roots was. We had to write these songs that were quite different to the political songs I sang about before. It was very high political, Rastafarian, religious stuff. It was about Africa and rebelling, fantastic music it was back then and  it got me to where I am now. This new album is a little bit more subtler.

Can you play it in your car with your mum?

Yes, absolutely. I don’t think my mum would have enjoyed my music before but I think now she would listen to my new songs.

You’ve gone in a new direction with your music – why is that?

I’ve had to because it’s the discovery of who you are and your eyes have got to be open at all times. It’s good to be focused but you have to have an eye open as well. Even though I love Roots and Culture and the music that I did before, I recognise now that people listening to my music probably don’t want to listen to political stuff – they just want to hear generic things about how I see the world, what my passions are, my love life and the stories I want to tell them, but also their love lives and their stories. I think that’s my responsibility now with my new found audience.

How long did the album take to make?

It took me about a year to get the songs together and about a year to record. We travelled to Jamaica to record it, I really wanted to get that Bob Marley connection so we went and used the studio he used for about 5 or 6 of his albums, using some of his musicians. 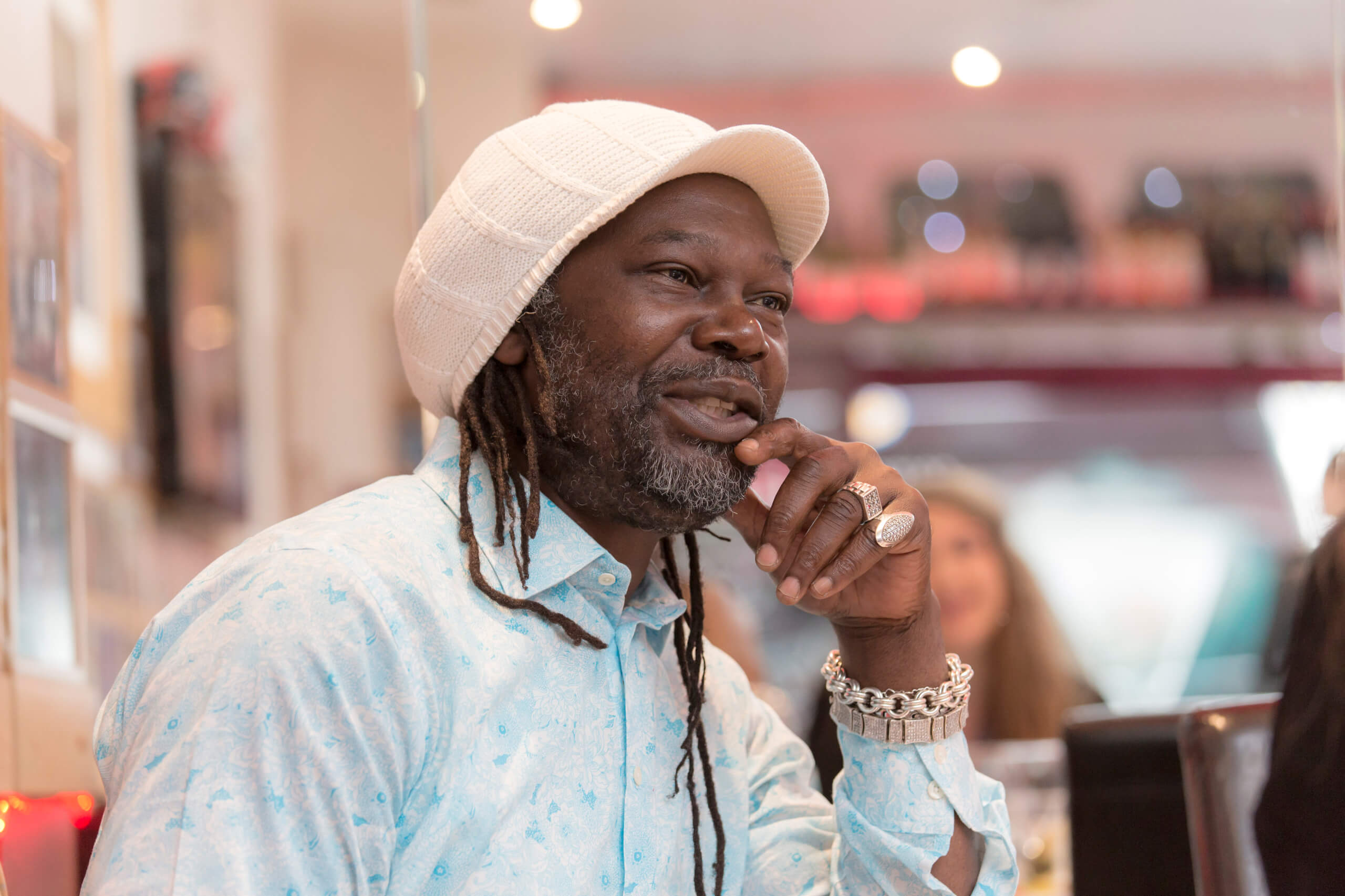 Everyone recognises you as the face of Reggae Reggae Sauce. Has it been hard for you to separate yourself from it for your music?

I actually think it has been easier, music was the reason why people liked me in the first place.

You did come on Dragons Den with a guitar..

I did and that was the hook. If I had just come on as me without the guitar and just stood there, it would have been a completely different Dragons Den and that would have been it. I think people now are expecting some music. They saw me with the guitar and they think what do you do with that. We’ve had the food, we’ve eaten it and it tastes fantastic and we’re still buying the sauces 8 years after, but where is that music you’ve talked to us about. I feel like people have been waiting 8 years for it and they’ve kept on hearing this one song.

Where did your reggae song come from?

I like to call it ‘inspired action’ I like that word and I used it a lot – inspired action. A lot of the time we get inspired and we never act on it. I just woke up one day and fused these two things that I love together. I love cooking and I love food and my kids recognise that and the only way to do that was to write a song about the product, about what it did and how it inspired us as a family. I don’t think it was the sort of moment when you think of something and it sort of comes to you, we just wrote the song even though my kids were like ‘Dad, please don’t sing that song again’. It’s about inspired action and you just do it and I did it when I had that inspiration. I won’t go pretending to be someone else – I’ll go as Levi Roots the singer/songwriter who loves his music and loves the food and that’s who I am and that is who they saw on Dragons Den.

How do you feel about Dragons Den now?

I watched it on Sunday and it was the best episode I have ever seen, I’ve got to say that. I don’t usually watch it and I didn’t watch it before I went on. I think it was about the same week I was discovered by them that I had actually heard of Dragons Den, it was uttered by one of the producers. This time around watching it really inspired me. The Dragons may not believe it’s a viable idea, but the man or woman standing there who is giving them their blood, sweat and tears knowing that he/she is going to be laughed at and to see them believe in it and if you can see beyond that and put yourself in that position, I think it’s one of the most difficult things you can do. To stand there and pretend you’re the finished product, when really you are looking for someone who can help you along the way, those who are brave enough, like me, like the guy who I saw on Sunday – he got the funding by being himself. He was all over the place, he got his numbers wrong but the passion came through.

You played Grillstock Festival in Bristol, are you planning on preforming at any more shows? 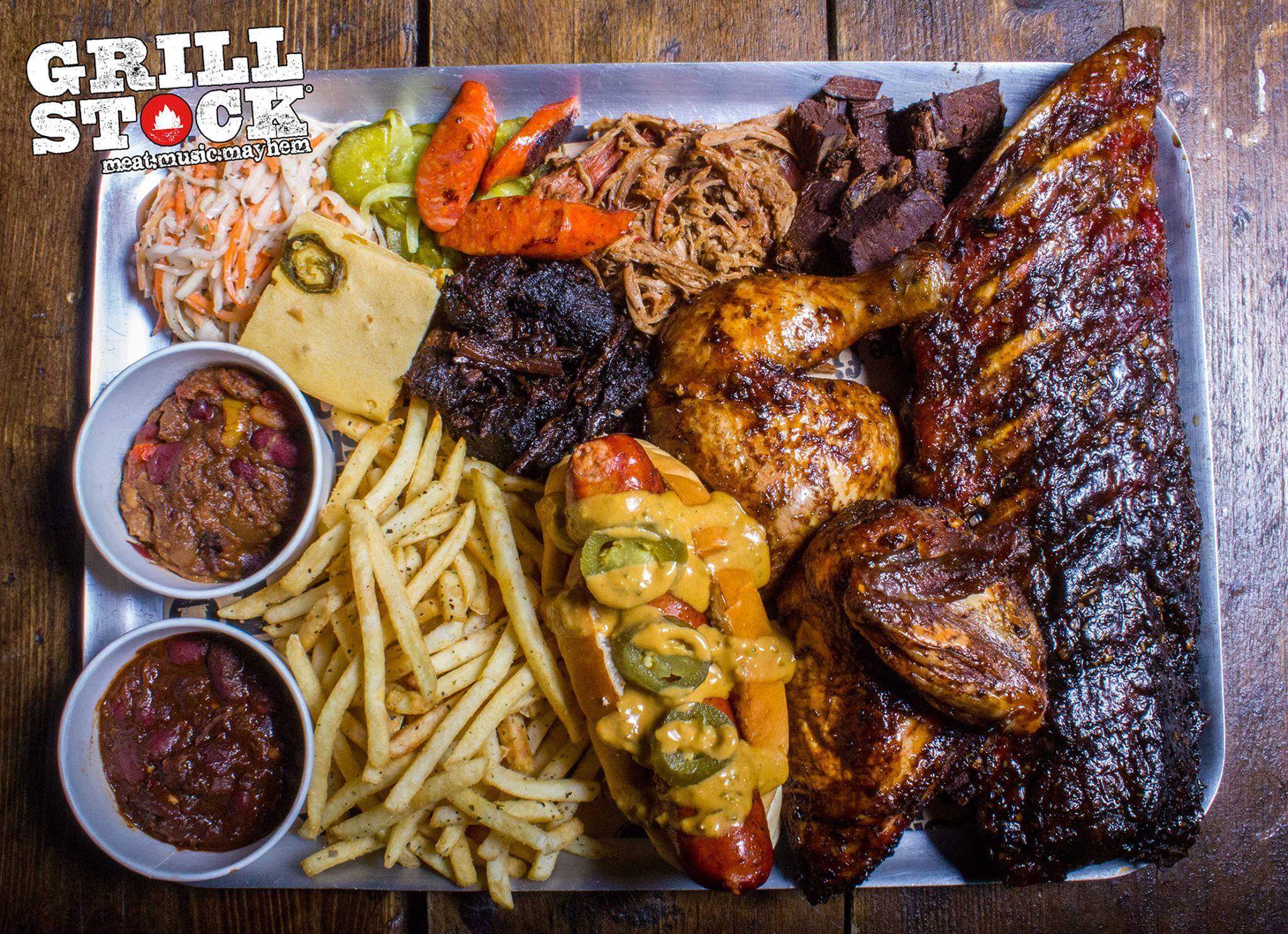 Absolutely, it was great being on the Grillstock stage, it was fantastic and by far the highlight of the day for us. We also performed at Grillstock in Manchester and we were so loved by them that we’re also doing Grillstock in London for the first time in September. We’re kind of on a UK tour at the moment. 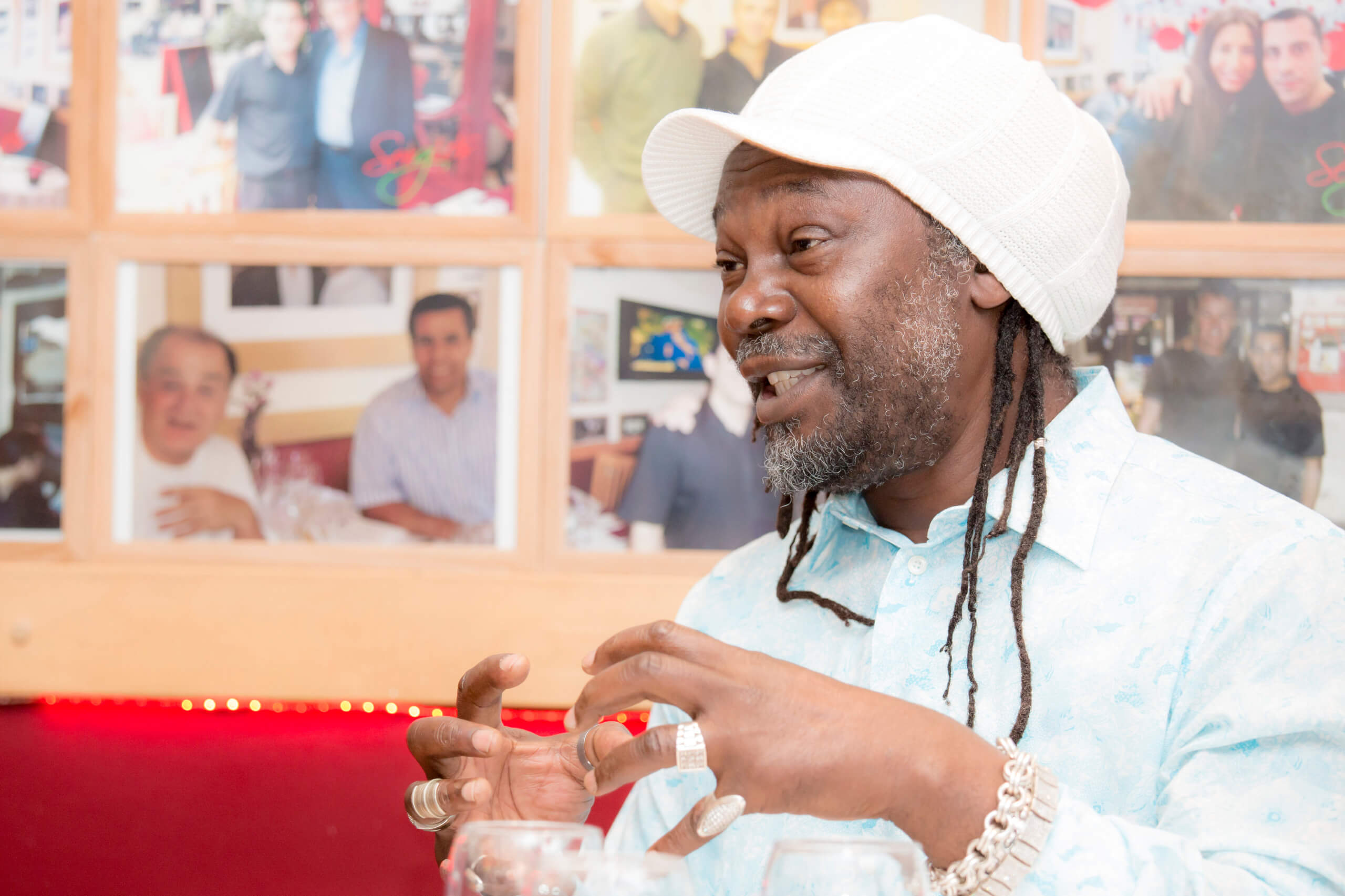 Have people warmed to the new album?

They have. There are certain songs now that I’m so glad we choose, that it was right to have the softer, more loving songs. We’re also singing a lot of cover songs. There are a few on the album and it allows people to interact with the music.

What’s your favourite restaurant in London?

I love this place here, I absolutely love Sergios’s. I think it’s great, it has a really great vibe when it’s packed outside and the best thing is the radio stations are all dotted around here, you have BBC Radio London and Radio 4 is down the road.

Do you think Brixton has a good food scene?

It has. It’s fantastic, there’s been a big change from what it was before and a lot of people are happy and others aren’t. 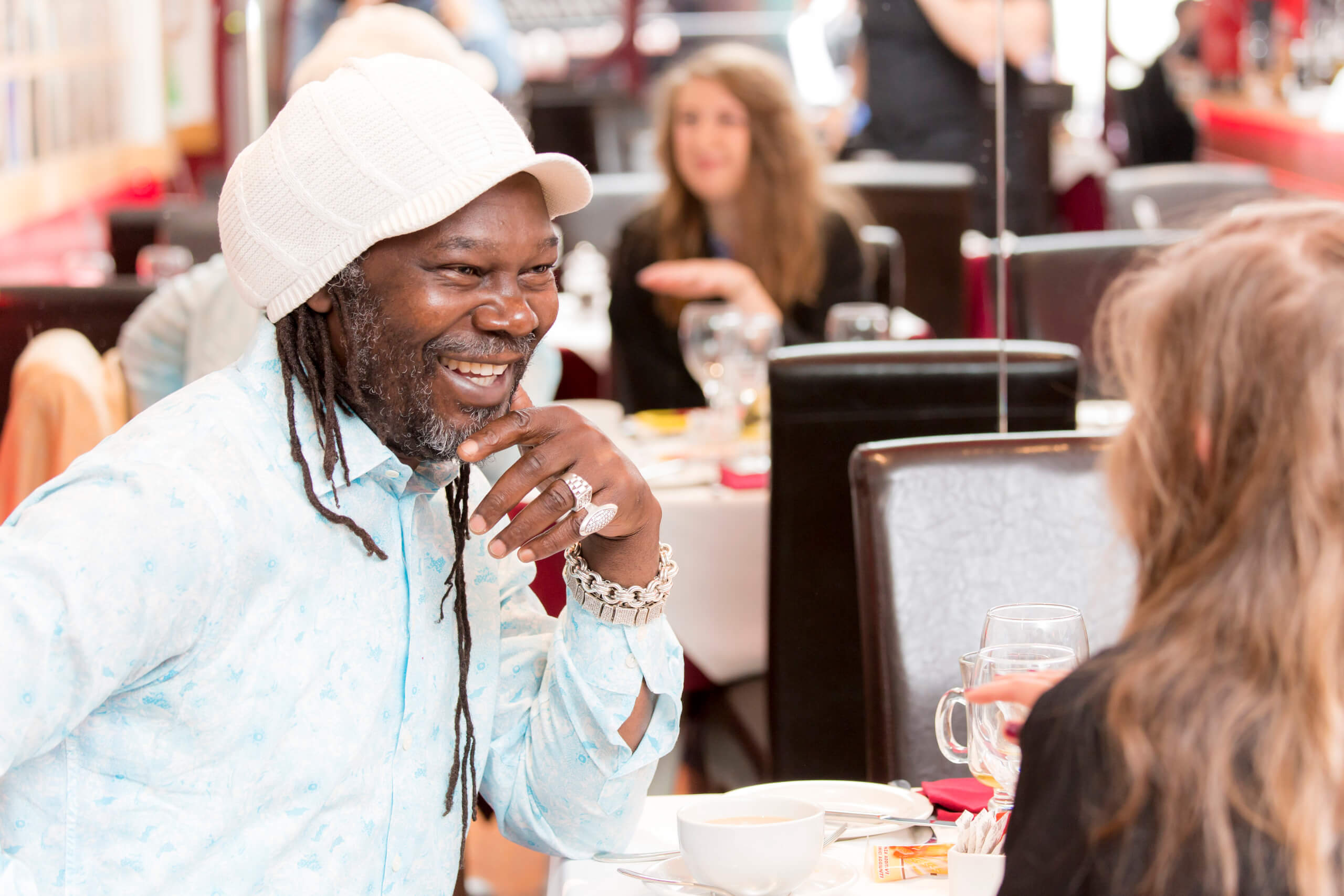 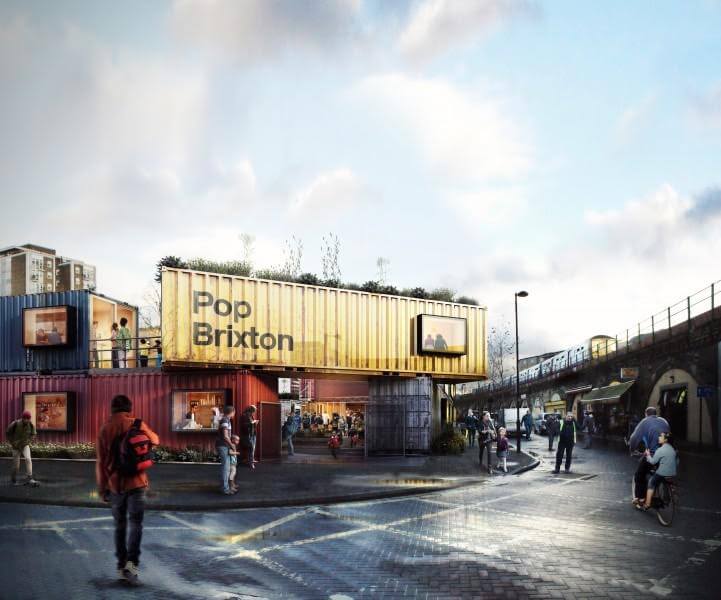 I love Pop Brixton. The reason why I’m a fan of the change is I can remember the days when no one would come to Brixton. A taxi would never take me from North London to Brixton late at night. I’d always have to ask for Vauxhall or Stockwell. It’s a great place, it has really transformed it. I think Pop Brixton has brought a younger element to what Brixton Market is about, where you can get your yams and your fish. Pop Brixton is about young people sharing ideas and having their say on what they want Brixton to be and there’s nothing wrong with that.

What is your go to meal?

Jamaican food is fantastic. It would have to be the Jamaican national dish which is Ackee and Saltfish. I cook it all the time.

You’re on a desert island and you’re only allowed to eat one meal and listen to one album (it can’t be your own album)?

When we didn’t have much money when we were making the sauce, we ate alot of pasta as it was cheap and you can just add tomatoes and you have a great meal. The kids and I would really enjoy that meal and for that reason I would have to say pasta – it always fills you up. The album I would listen to still goes back to music we were listening to when we were making the sauce and I’ll choose the Red Hot Chilli Peppers Californication, it was the soundtrack to the sauce. For some reason we weren’t listening to hardcore reggae. I will never forget it, that album just makes me think about where we were coming from as a family in my flat in Brixton, just to remind me where I’m coming from and perhaps where I’m going to go when I get off this desert island.

Root’s new album Rise Above is available from 31st July