Food / Recipes / About Time: You Got Creative with The Collective Dairy

About Time: You Got Creative with The Collective DairyBy Angelica Malin

The Collective’s latest Pear ‘n’ Maple Limited Edition yoghurt has just launched, and to celebrate, they have created some delicious pear-inspired autumnal recipes. 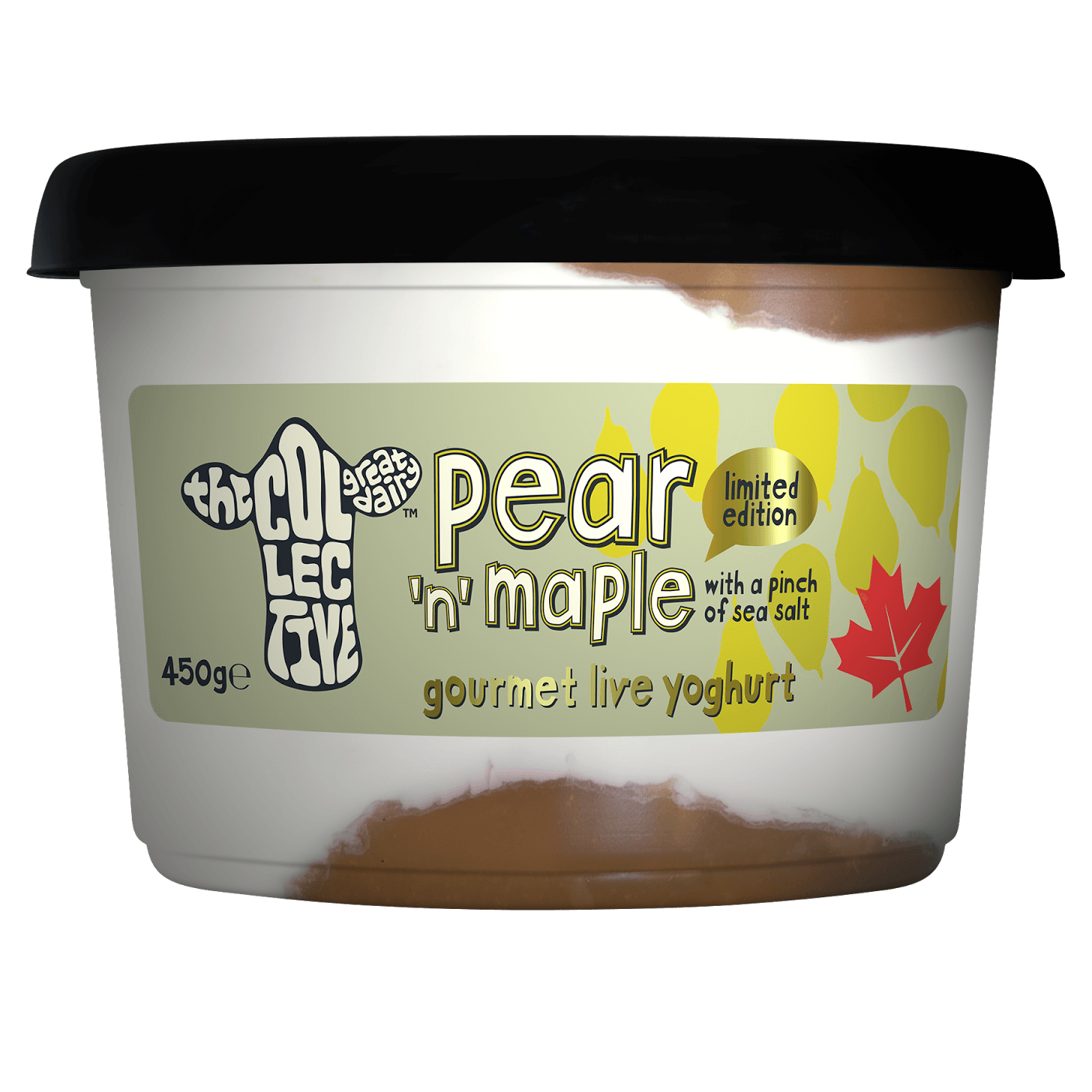 Now we’re well into Autumn, it’s the perfect time to hunker down with some warming porridge, spiced poach pears and a beautiful Tarte Tatin: 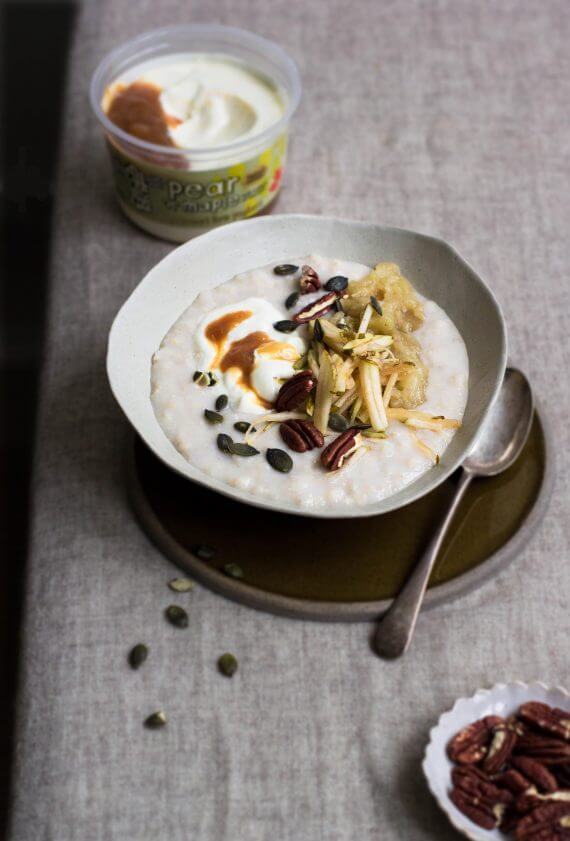 1. To make the compote – Put the chopped pears into a saucepan and squeeze over the lemon juice. Add the vanilla, ginger and salt and cover with the lid. Cook on a low-medium heat for 15-20 minutes until the pears have softened completely and are beginning to break down. Check the pears halfway to make sure they’re not drying out. Add another tablespoon of lemon juice if it looks like they need it. Turn the heat off, then stir in the miso. Mash the compote with a fork or blend for a smoother compote. Sweeten with maple syrup if you like.

2. Meanwhile heat the oven to 160°C (fan). Spread the nuts out on a baking tray and put in the oven for 5-10 minutes, turning halfway until they smell toasty and fragrant.

3. To make the porridge – Put the oats and milk/water in a saucepan and cook on a medium heat for 5-10 minutes until thick and creamy, stirring constantly. Add more or less liquid if you prefer a thicker or thinner consistency. Take off the heat and leave to cool for 2-3 minutes before stirring in the yoghurt and salt.

4. Divide into two bowls and top with the toasted nuts, seeds, yoghurt, compote and fresh pear.​ 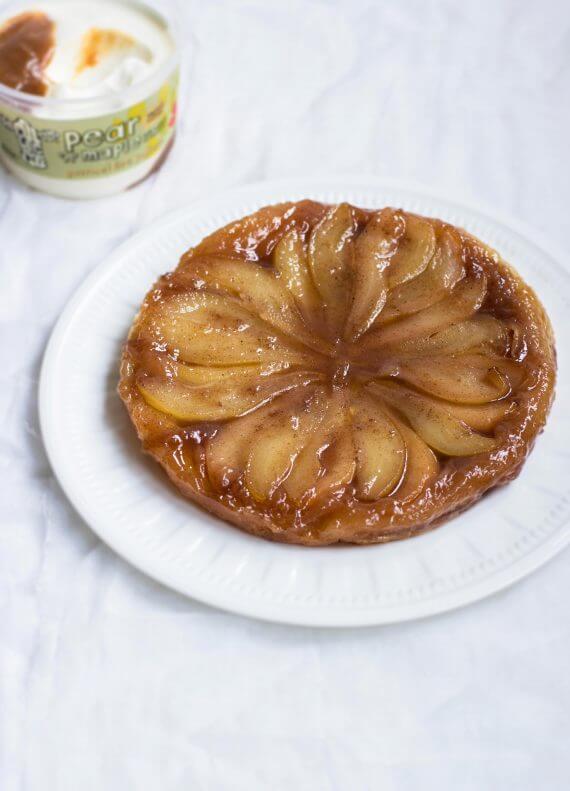 1. Peel and core the pears then cut into wedges approx. 1-2cm thick. Take the pastry out of the fridge to bring to room temperature.

2. Melt the butter and sugar on a medium heat in an ovenproof pan that is roughly 20-22cm wide. When the sugar has dissolved, add the spices, vanilla and a pinch of salt and stir to combine. Add the brandy and let it bubble for a moment then squeeze in the lemon juice.

3. Turn the heat down slightly and add the pears to the caramel, spooning the caramel over them so they’re covered. Cook them gently for around 10 minutes until tender but retaining their shape. Turn the heat off and allow to cool slightly.

4. Meanwhile, heat your oven to 190°C (fan) and roll the pastry out using a rolling pin to about the thickness of a £1 coin. You may need to lightly flour your work surface to prevent sticking. Using a plate that is slightly larger than your pan, cut the pastry into a circle, wrapping the offcuts in Clingfilm and store in the fridge to use in another recipe.

5. Arrange the pear slices prettily in the pan. Drape the pastry over the pears and tuck the edges snugly around the pears and down the sides of the pan. Brush the top of the pastry lightly with butter and pierce a few times with a fork.

6. Put the pan in the oven and cook for 30-35 minutes until the pastry is golden and has puffed up. Take out of the oven and let sit for 10 minutes before running a knife around the outside and turning the tart onto a serving plate.

7. Serve immediately with The Collective Pear + Maple yoghurt on the side. 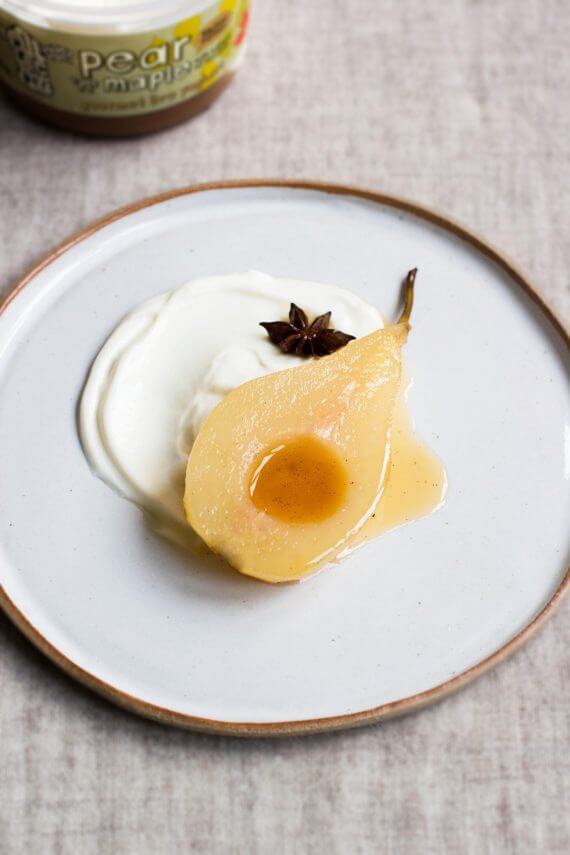 1. Use a sharp knife to split the vanilla pod lengthways and scrape out the seeds.

2. Pour the wine into a large saucepan and add the vanilla seeds, vanilla pod, star anise, cinnamon stick, cloves and sugar. Heat on a low-medium heat, stirring everything to combine, until the sugar dissolves.

3. Add the pears, making sure they’re covered in the liquid and simmer with the lid on for 20-30 minutes until a toothpick pokes through easily. Take the pears out using a slotted spoon and set aside.

4. Turn up the heat to bring the syrup to a boil.  Cook, stirring occasionally, for 20-30 minutes until it has reduced by about ½, has thickened and looks syrupy. Remove the spices (you can save them for decoration if you wish). Add the pears back to the syrup and allow to cool.

5. Serve at room temperature with a generous dollop of The Collective Pear ‘n’ Maple yoghurt. The pears and syrup can be stored in the fridge in an airtight container for up to a week.