Looking for some healthy winter porridges recipes? We’ve got it covered. The mornings are getting darker and colder as the autumnal weather approaches, and let’s face it, there’s nothing more we want to do than hit snooze and roll over for another five minutes kip. But waking up to one of these beauties is another story. Whether you want to load up on fruit, fancy a sweeter treat or instead, are looking for a lighter option, we’ve got you covered. Here’s our favourites: 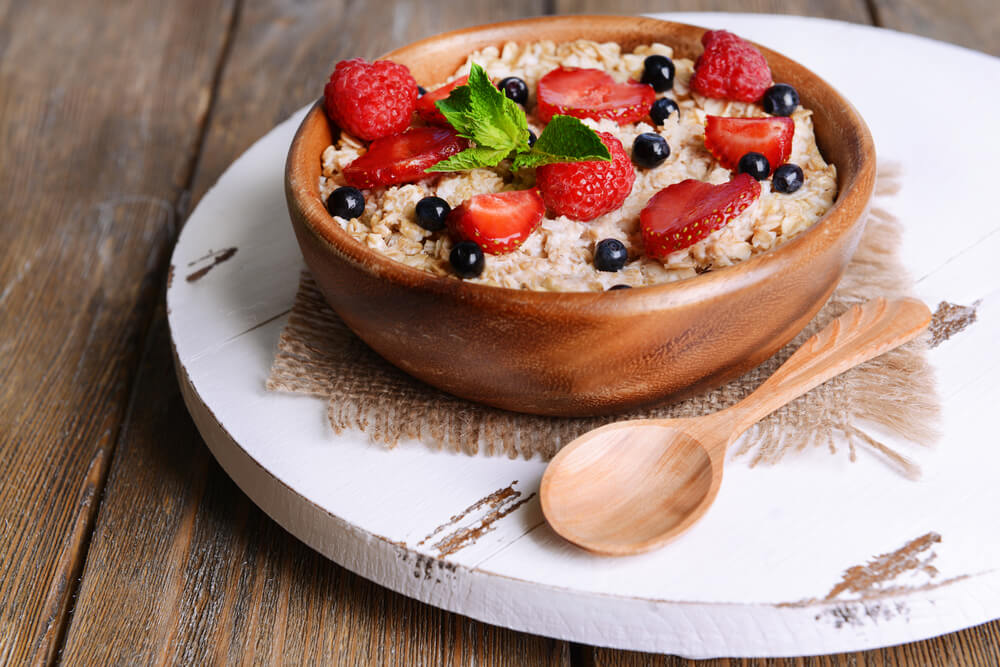 1. Combine the oats, milk and water in a medium saucepan. Stir well and place over a high heat, until the mixture begins to boil. Turn the heat down and stir continuously for 4 – 5 minutes until the porridge becomes thick and creamy.

2. Remove from the heat and stir in the sunflower seeds. The porridge will continue to thicken as it cools.

3. Divide the porridge between 4 warm bowls, top with the fresh berries and drizzle generously with Clarks Maple Syrup.

Notes: Substitute the sunflower seeds for a mixture of pumpkin, sesame and poppy seeds. Frozen berries are a good substitute when fresh berries are not available. Simply warm in a small saucepan with a good glug of maple. 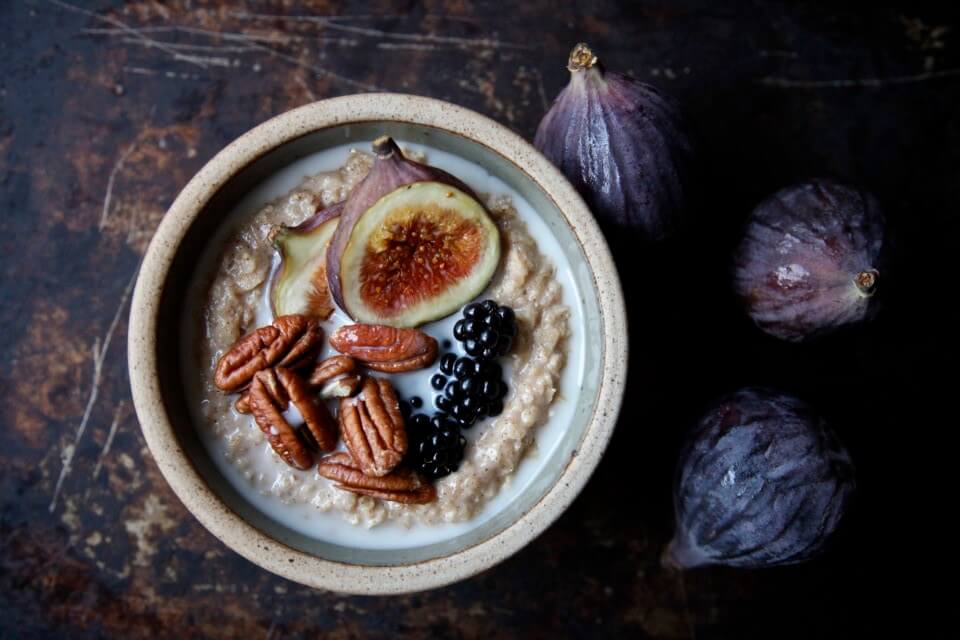 1. Put the oats in a small saucepan and dry-toast on a low heat until they’re slightly golden and smell like baking biscuits. Mix 1/2 tsp cinnamon and 1/4 tsp each of nutmeg, allspice and ginger with the oats whilst dry-toasting (this really enhances the flavour).

2. Add the salt, milk, vanilla and sweetener of choice, turn the heat to medium-high and let the porridge come to a rolling boil.

3. Once it has come to a boil, reduce the heat to a simmer and start stirring. Some people prefer to stir it every once in a while but I like to stir pretty regularly – it seems to make for a creamier end result.

4. Pour the porridge into a bowl to cool for a couple of minutes whilst you prepare your toppings.

5. After cooking top with a fresh fig, blackberries, a sprinkling of pecans and a splash of cold almond milk. 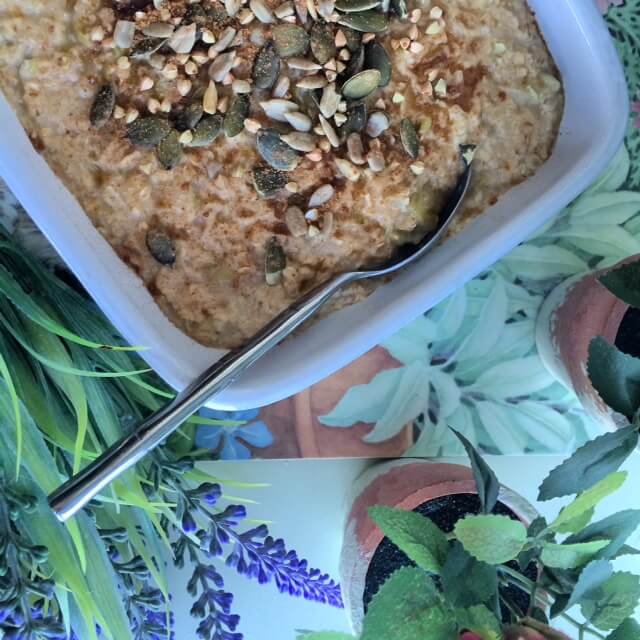 1. Combine the apple, porridge oats, cinnamon and milk in a saucepan and boil until it has thickened

2. Pour the porridge into an ovenproof dish and sprinkle it with the seeds and groats

4. Remove the baked porridge from the oven and sprinkle it with coconut sugar – return the dish to the oven and bake for a further five minutes

5. Remove the dish from the oven and leave to cool for five minutes. Dig in and enjoy! 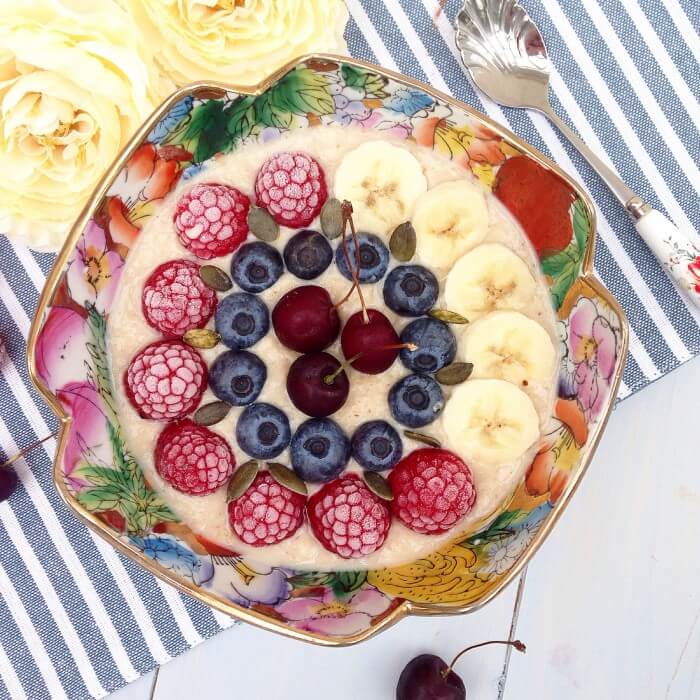 Toppings: frozen strawberries, cherries, pumpkin seeds, blueberries & banana. But you can use whatever you like 🙂 maybe some cacao nibs, bee pollen or other fruits.

1. Simply add the oats, almond milk, maca powder and honey to a pan and allow it to heat for about five minutes or until the liquid has been absorbed.
2. Stir in the almond butter and let it dissolve.
3. Once it’s all mixed pour into a pretty bowl and add your toppings. Enjoy! 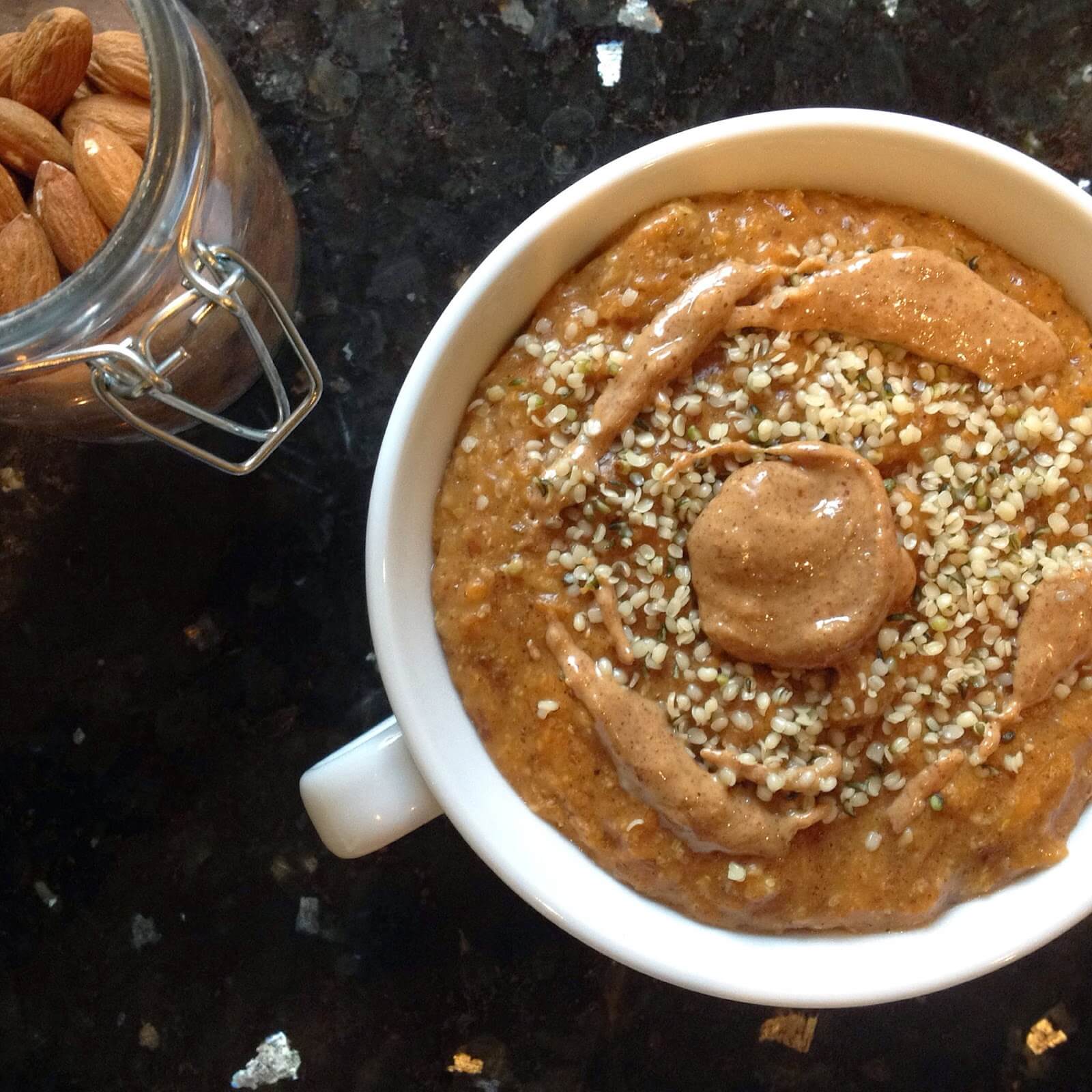 Add the oats and water to a pan, together with all the spices, flaxseed, carrot and banana if you’re using. On a low heat, keep stirring and once heated through, serve. I top with a drizzle of peanut butter, and this time round, some hemp hearts for a blast of goodness.
This works even better if you soak it overnight and is so quick in the morning!

Recipe and image courtesy of Holly Williams of Purely Holly. You can follow Holly on Twitter: @PurelyHolly 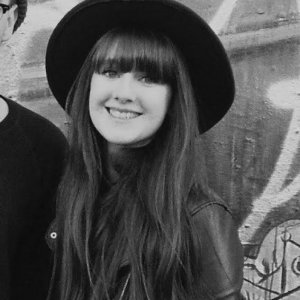 Loriley is the Recipe Editor at About Time. After discovering she had a gluten intolerance at the start of 2014, she used food blogging as a way of discovering alternative recipes for her doughy favourites. Shortly after, she set up the #fdbloggers Twitter account, hashtag and Twitter chat, to help food bloggers spread the word of their work. By day she works in social media and can be found annoying others with her constant need to photograph food before it’s eaten. You can find her on Twitter: @lorileysesh & @fdbloggers