Who invented bottomless brunch? It was clearly someone who decided that having large portions of both breakfast and lunch was not enough by itself and instead what was needed was litres of alcohol to wash the whole thing down. The bottomless aspect of brunch is a relatively new phenomenon in the UK and has resulted in brunch becoming a night out in itself (just in the mid-morning). 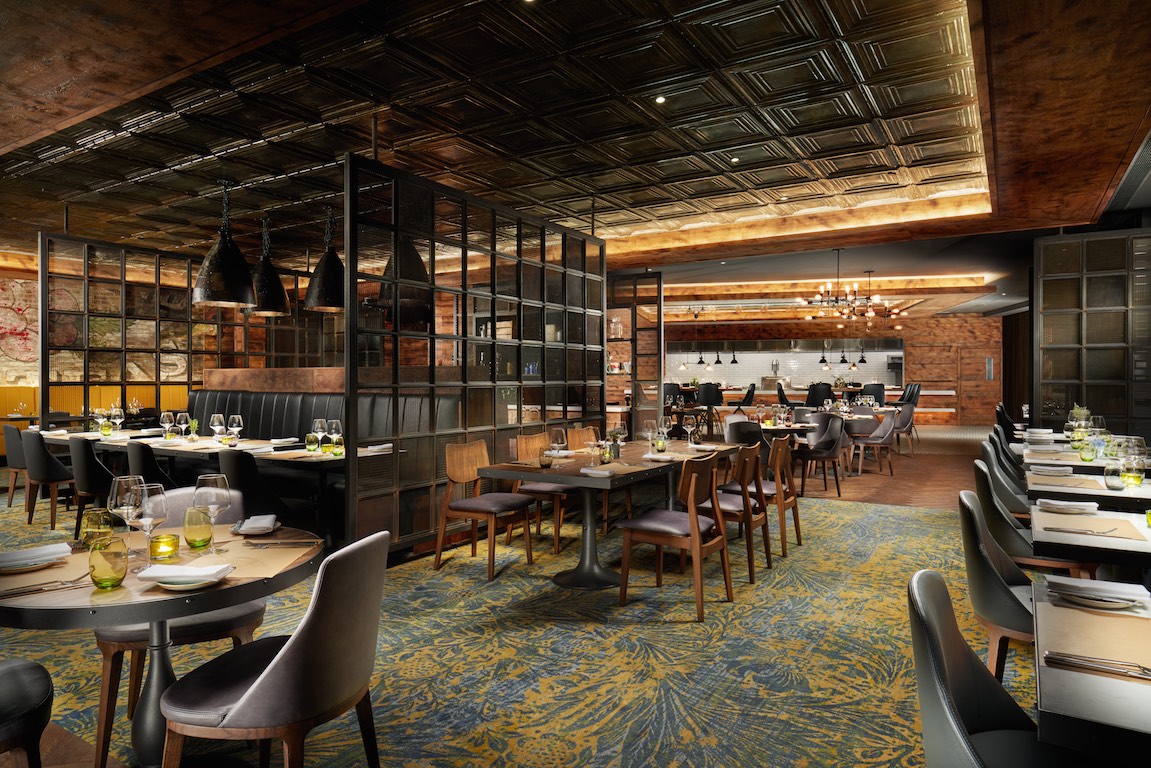 The first thing to say about OXBO is that it doesn’t feel too much like you’re eating in a hotel. There’s a separate entrance, and the room is modern and airy. A lot of people find it strange eating in hotels in their home city, but don’t let that put you off too much. OXBO is really handily located as well; a stones throw from the TATE, you can see some Edvard Munch after eating brunch. (Yes I’m aware this doesn’t rhyme.) The staff are all very friendly and the Manager assures me that they serve the best brunch in London, or top two anyway. Looking around at a packed room it’s clear that some people have got the message. Meanwhile, we’re also informed there’s a strict two-hour limit. Bottoms up. 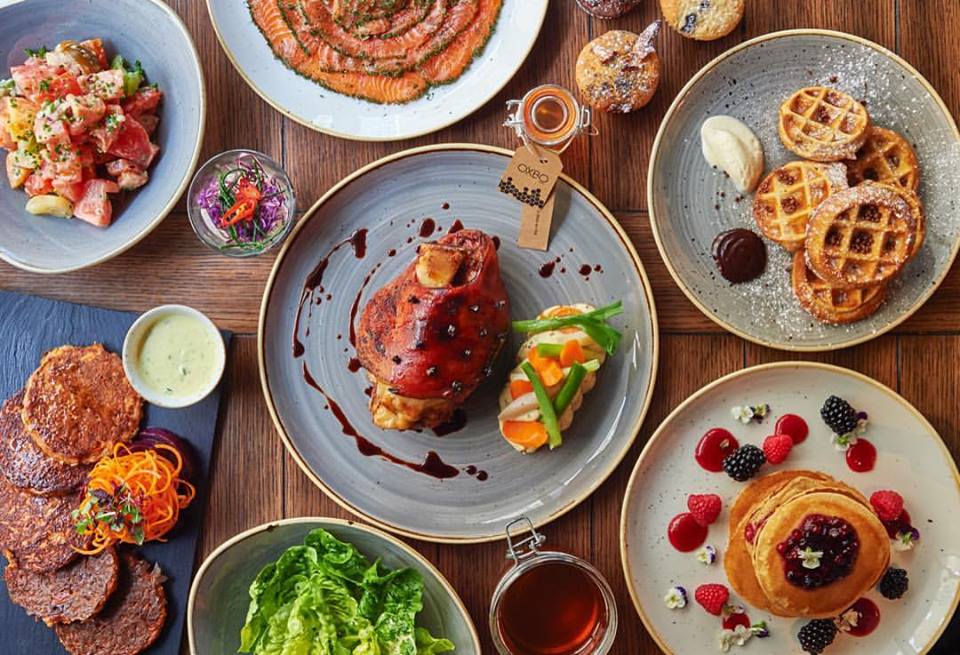 OXBO have really taken the lunch/breakfast combo to a whole new level. This is a four-course campaign that starts with Britain’s biggest cause of over-consumption, the buffet. Unlimited starters are carefully curated around a centrepiece table that is truly a feast for the eyes. I try and pace myself. As a seasoned buffet man, I know too well the pitfalls of an overfilled first plate. There is, however, a huge variety of foods on offer here. Hummus for brunch? Naturally. Caesar Salad? When in Rome. All topped off with a serving of tuna sashimi. We arrived early and got the freshest, most uncrowded experience possible. It got busier later, so my advice would be to avoid the rush. Nobody likes buffet barging.

The next course is slightly more traditional (nice) hotel breakfast. There’s a station in the kitchen where you can have a variety of dishes made to order; from eggs royale to waffles and pancakes. This course was slightly disappointing (especially compared to the previous), and a little unnecessary. It’s a large restaurant so everything is par-cooked or whipped up very quickly. My eggs Benedict was lacking flavour and the egg could have been hotter. It wasn’t terrible, it just seemed slightly out of place with the quality of the other dishes on offer. 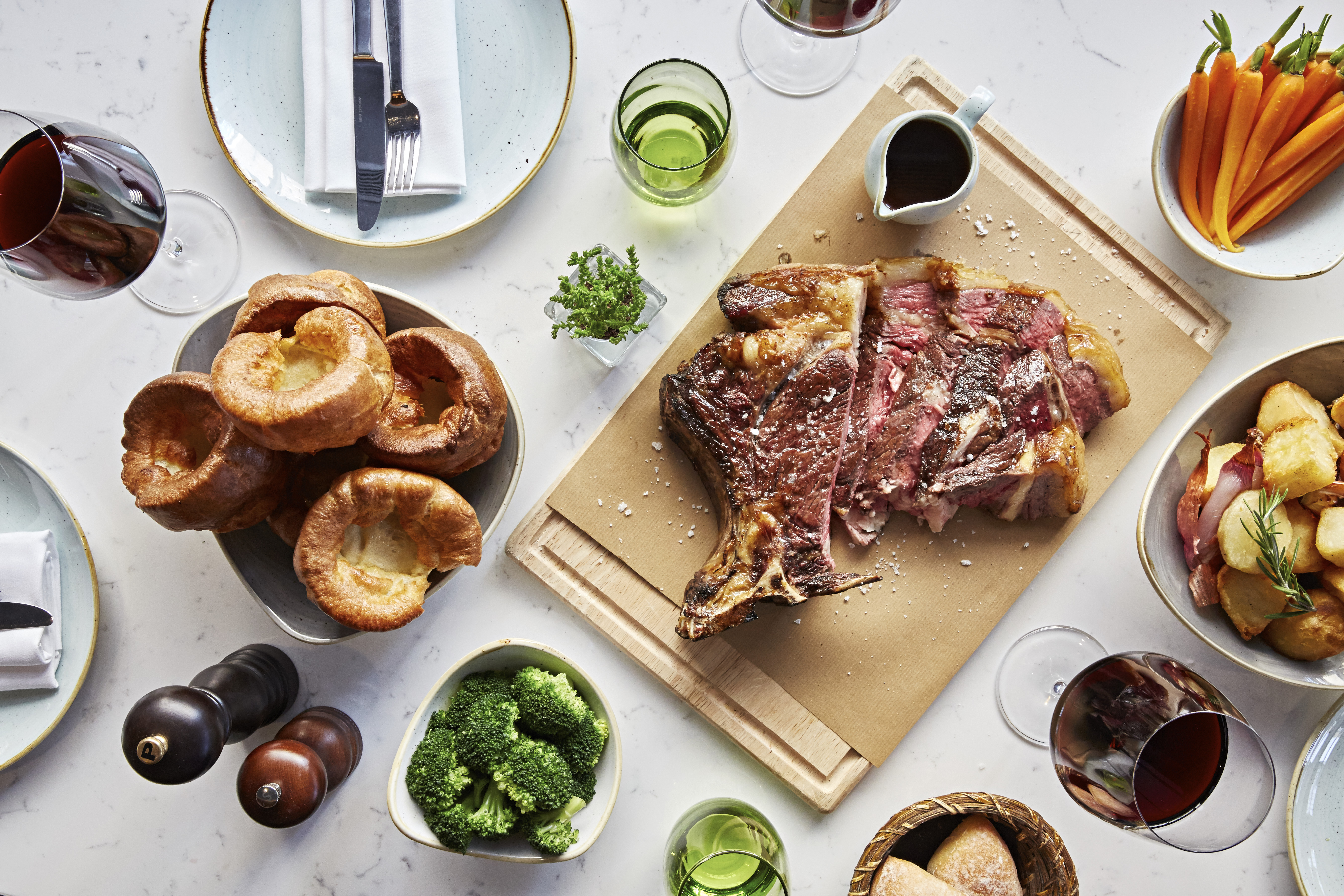 If you haven’t exploded already, there now follows three, yep three, ‘main event’ dishes, cooked in the kitchen and served to the table. We had just two (blame the buffet): a grilled beef and vegan falafel dish. Both were a marked improvement on the previous course and demonstrated why OXBO has received so many great reviews. You really want to try and save room for this course which comes on sharing plates allowing you to take as much or as little as you’d like. For me being served all three dishes, although delicious, seemed odd as I wouldn’t usually eat grilled beef and a fish dish simultaneously. That said, it’s probably the weekend so all the rules go out the window.

I’m feeling full just writing this last paragraph but, there’s dessert. We’re back to what OXBO do best: a second table stacked with pastries, pies, cakes and cheese. It’s every dessert you could ever dream of and, you guessed it, you can have as many as you like. All this whilst your glass is being skilfully topped up by a member of staff every 10 minutes or so.

It’s easy to see why Bottomless Brunch, and in particular this one, is so popular. It’s a great option for anyone wanting to have a long blow-out weekend feast, probably best enjoyed as a group. I’m not sure who invented Bottomless Brunch, but I’m sure they’d be proud of this creation. The brunch is packaged with live music and priced at £45, and  can be booked here.