There’s something about Tom’s Kitchen in St Katherine’s Dock that surprises me. Low-lit, vibey, intimate; it’s a far cry from a generic chain restaurant you might imagine when an (albeit charismatic, perfectly stubbly) TV chef name is attached to it.

Tom’s Kitchen in St Katherine’s Dock has nice personal, little touches; more grown-up to the homey branch at Somerset House – a restaurant that’s a danger to enter for fear of being run down by mommies with push chairs taking little ones around the galleries – with exposed brick, single-bulb lights and huge tables. Tom’s Kitchen in St Katherine’s Dock is more industrial and raw-looking than the other branches; and well, frankly, a bit more cool. 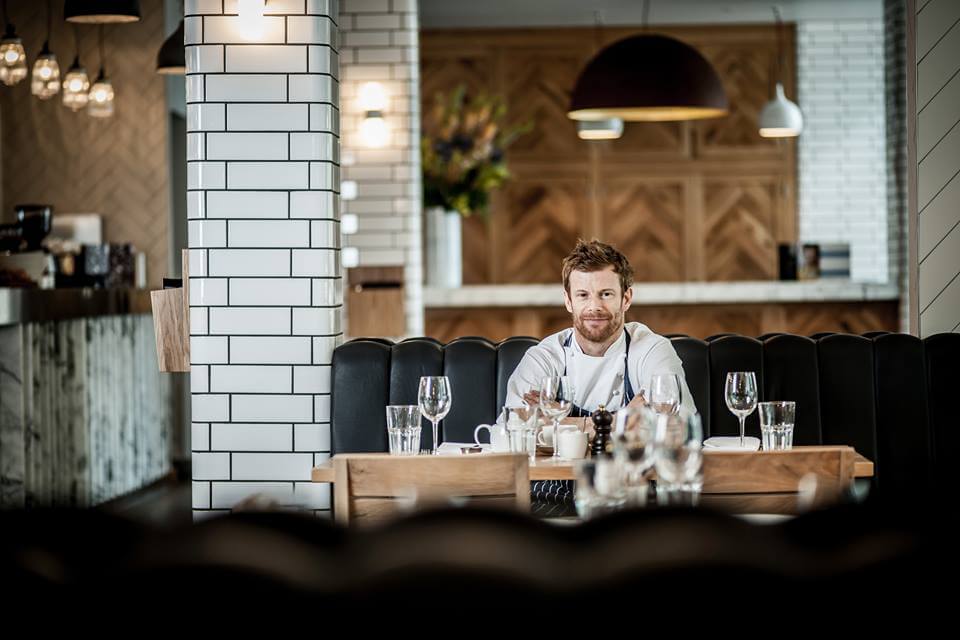 We settle into a two-seater by the window, surrounded by loose-tied men in suits devouring steaks and beers with post-work fervour, and a smattering first dates. Spotting plates of chips and pies, I mentally lower my food expectations. But, in fact, I needn’t have worried; the food at Tom’s Kitchen is both fancy and good. If you’re looking for a new city spot, or a special Valentine’s Day treat, here’s what you need to know: 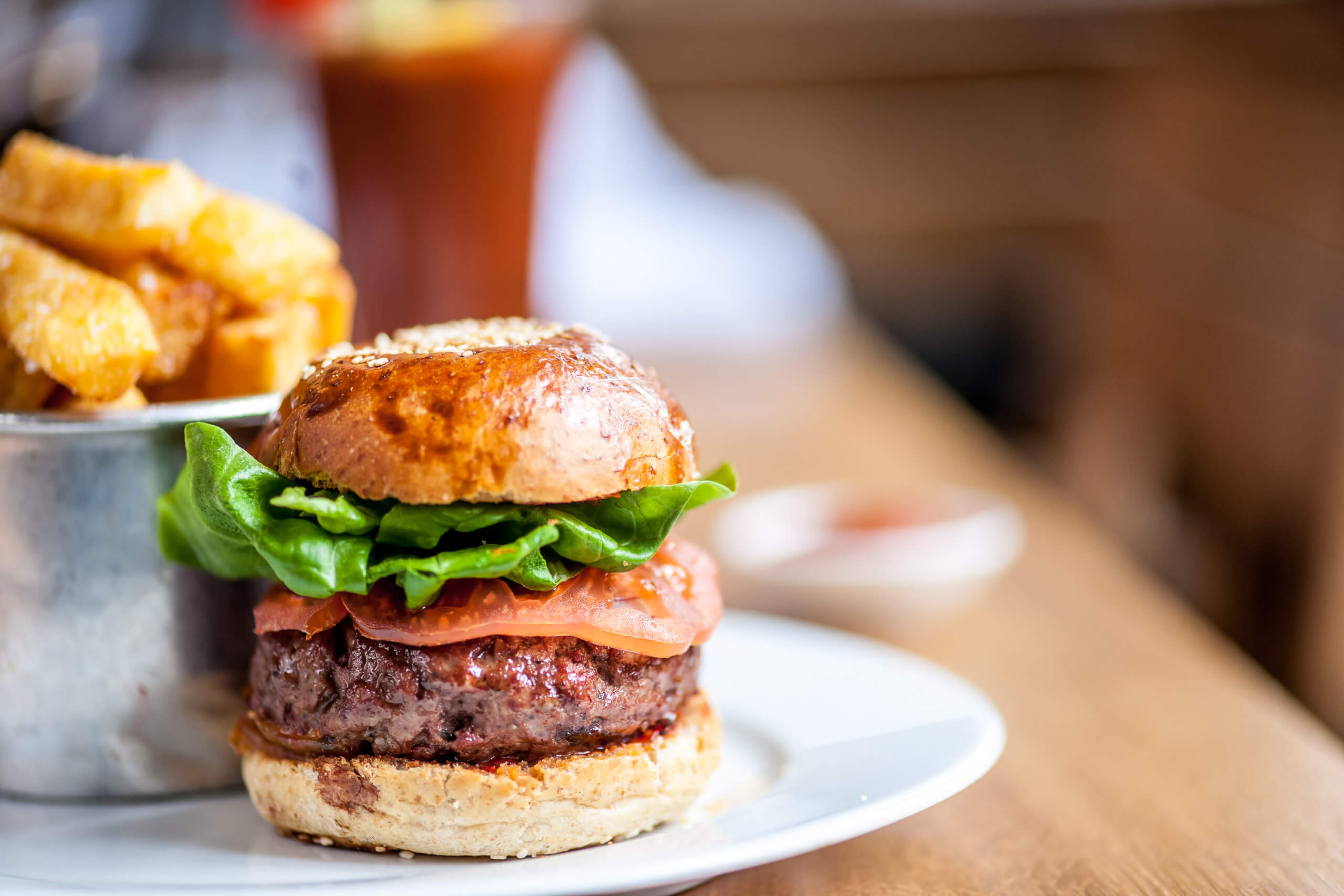 I’ll be the first to admit that location isn’t this restaurant’s selling point. Of course, you’re not going to trek to Tower Hill unless you live, work or play nearby – but if you’re in need of something close to the city, it’s perfect. The setting is pretty for London; the dock glitters at night with small yacht boats, and there’s a handful of nice places for cocktails nearby. If you need something more central, Tom’s Kitchen also has branches in Covent Garden and Chelsea.

Start with the English Garden; a deliciously refreshing mix of gin, cucumber, apple juice and elderflower – served in a martini glass, it’s almost too drinkable. They’ve got a good wine list; and other cocktails include the Valentine’s Day special, passion fruit mojito. 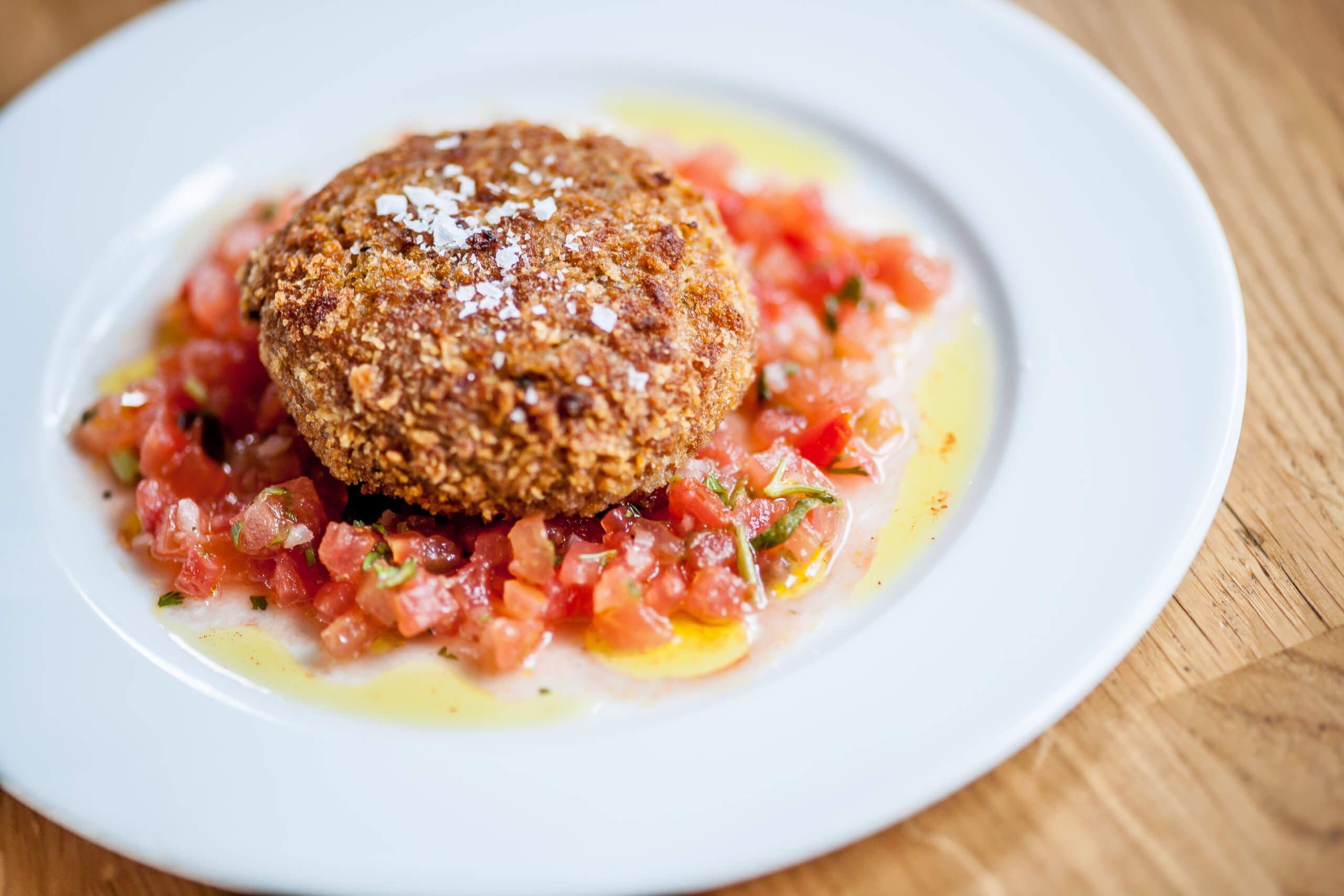 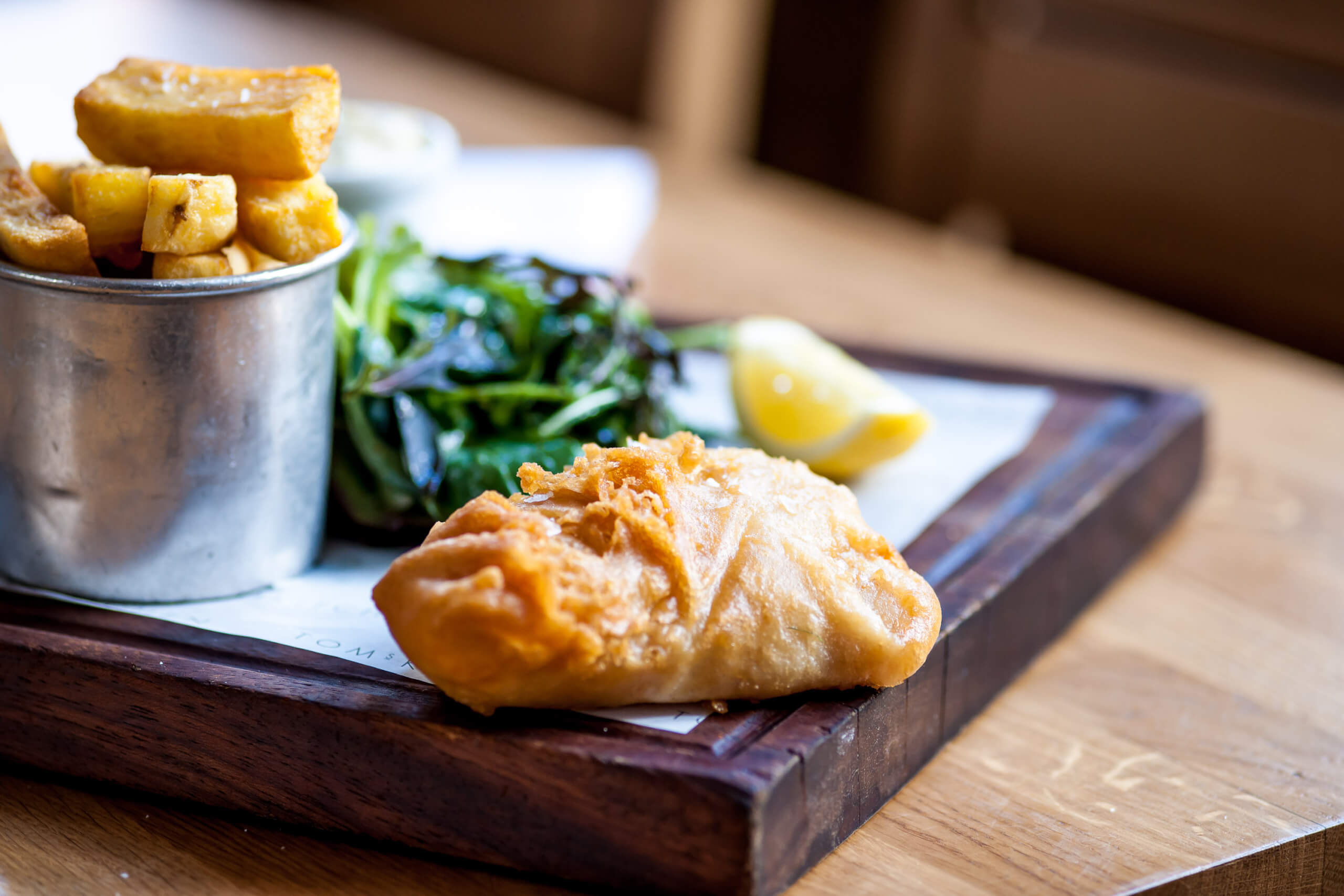 In homage to Tom’s roots, the menu focuses on seasonal, British produce, with a handful of great weekly specials. We start with crab cake with a spicy tomato salsa and a special ‘raw’ artichoke salad, inspired, we’re told by our almost-sighing waitress, by the recent ‘vegan’ health craze sweeping London. Trendy. The crab cake is good; not too heavy in potato, and still light and fluffy inside. The British artichoke salad is crisp and light, if a little virtuous, and we forsake the actual greenery for English Garden cocktails. Basically the same, no? 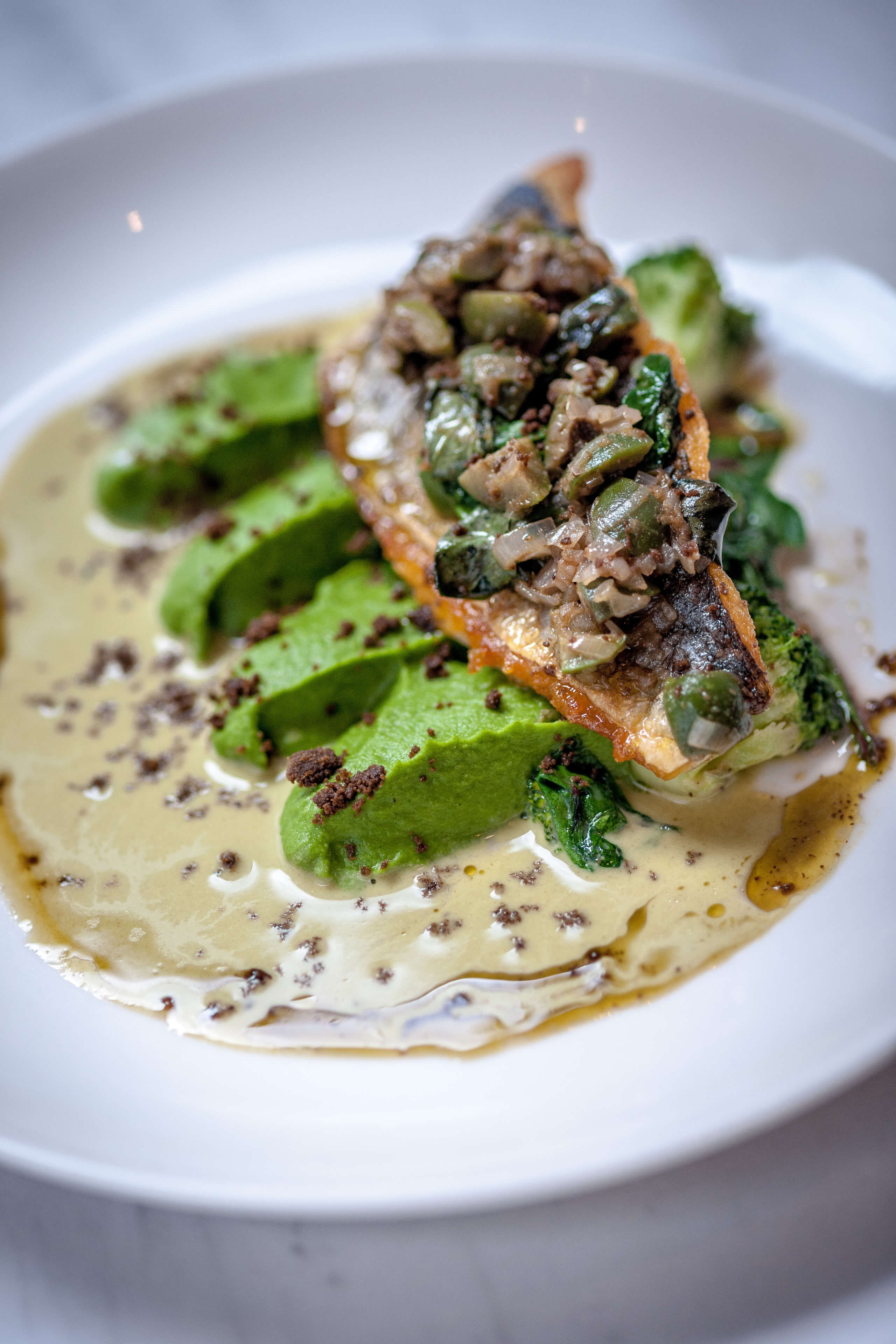 The main courses are impressive; my dish of monkfish, cauliflower puree and oxtail croquettes is much more than I’d hoped for. The monkfish is perfectly cooked, with that delicious meatiness and robustness of the Monkfish complimented perfectly by steaming deep-fried croquettes filled with tender, melting oxtail meat. It’s a strange, bold combination, but it really works. The cauliflower puree is the necessary mediator in this fish / meat duel, and it calms the whole plate down, creating a harmony between what could be a cacophony on a plate, to become a lovely melody. Enough over-analysis of fish, my guest has the cod with tomato and red pepper salsa, and declares it ‘nice’. 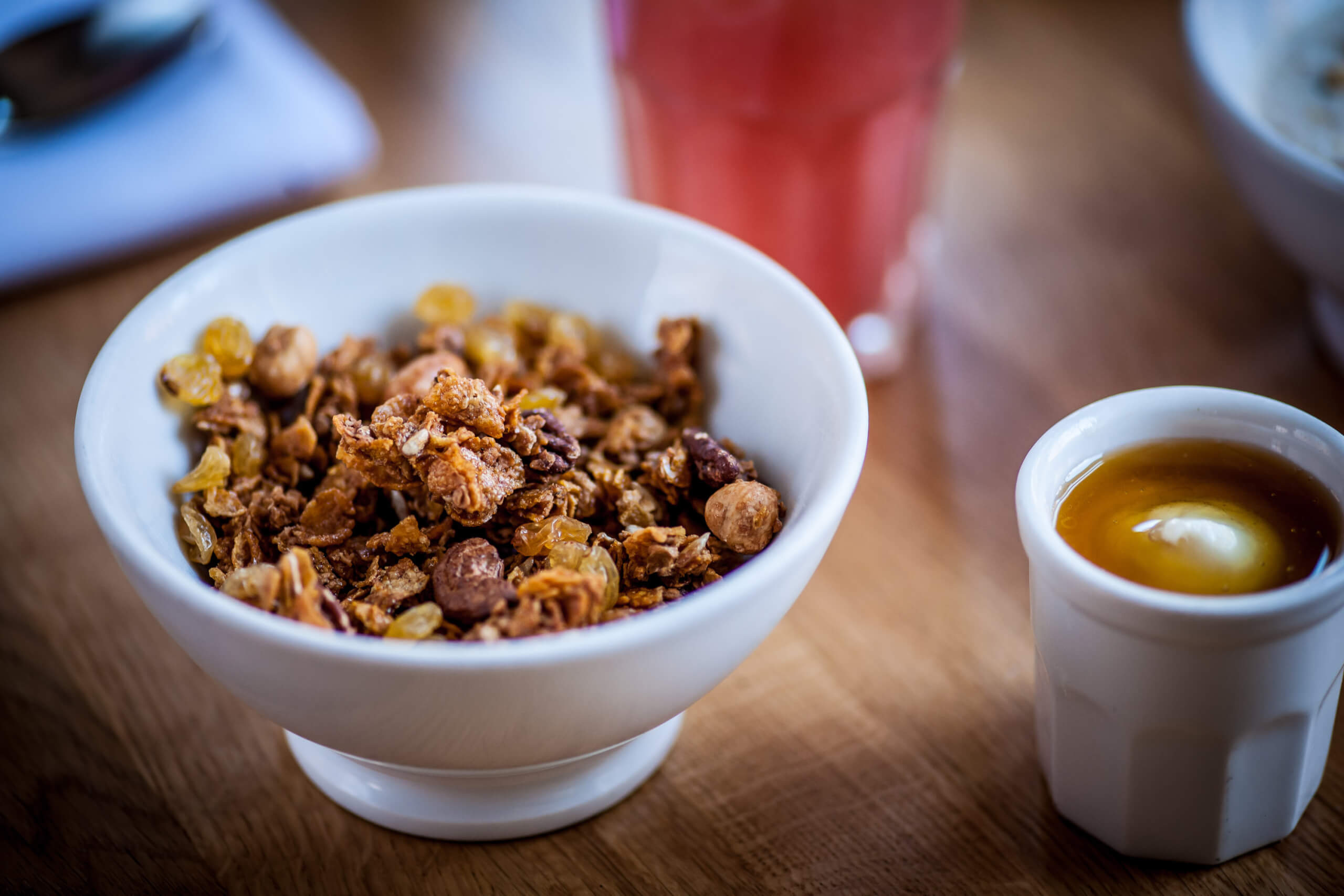 For pudding, we opt for classics. This pleases me, as there’s nothing worse than the over-fancification (official term) of British puddings. For fear of sounding like the EDL of sponge, I hate nothing more than an over thought-out classic – chocolate fondant with unnecessary flavours like orange oil, and crumbles made with things are holy as gluten-free flour or spiced custards. Make it simple. Make it British. Make it with too much sauce and unplanned oven-explosions of baked fruit spilling down the sides. 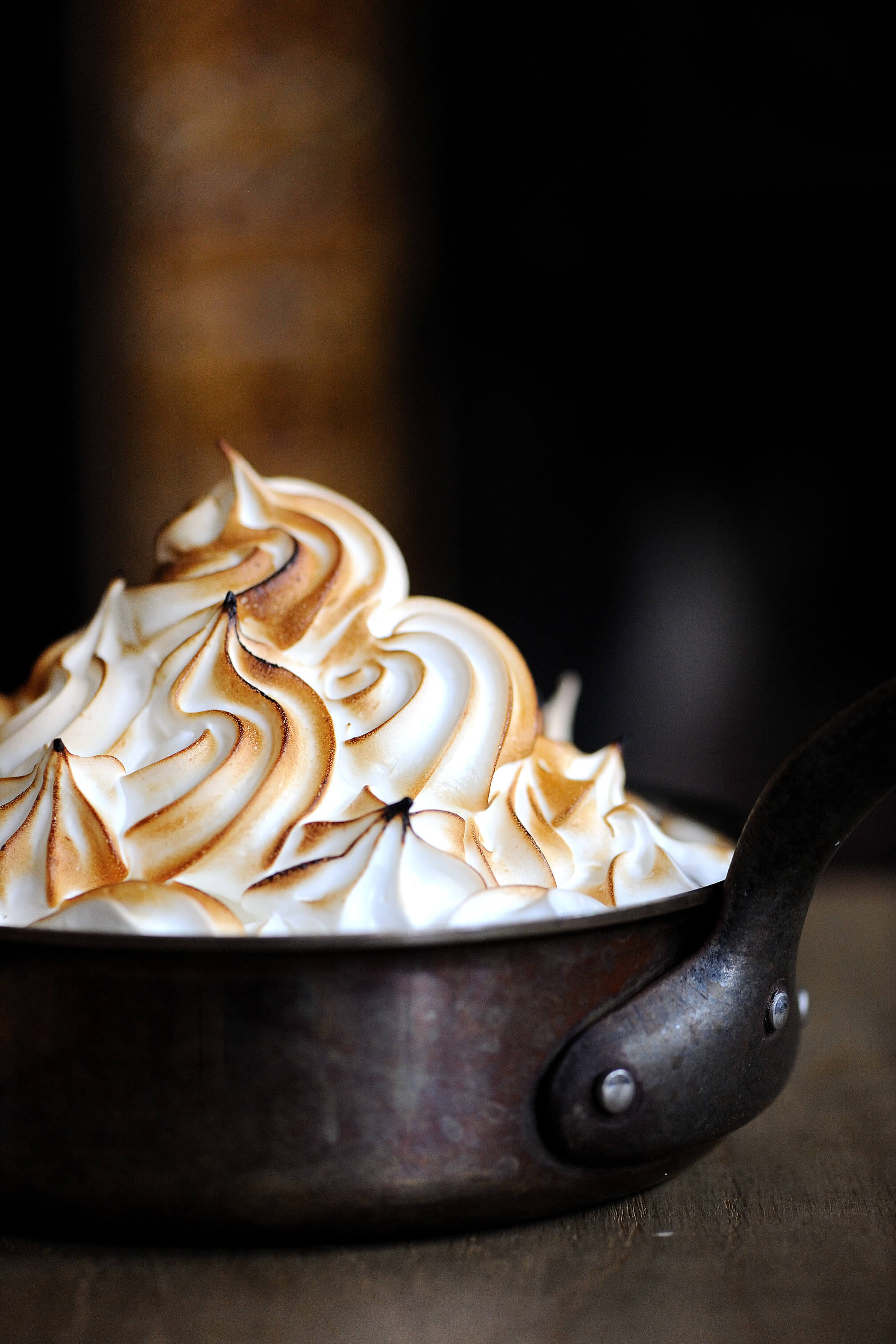 Lucky, Tom’s Kitchen wins on this front. My guest’s sticky toffee pudding looks like it needs more sauce, but I don’t pay it too much attention as I munch my way with glee through the most delicious, truly imperfect, truly British, apple and pear crumble with custard AND almond ice cream. It’s all sweet and tart, a bit messy and the ratio of fruit to topping is bang on, making me forget all about my guest’s Sauce Gate over the table. All in all, British food done really, really well. 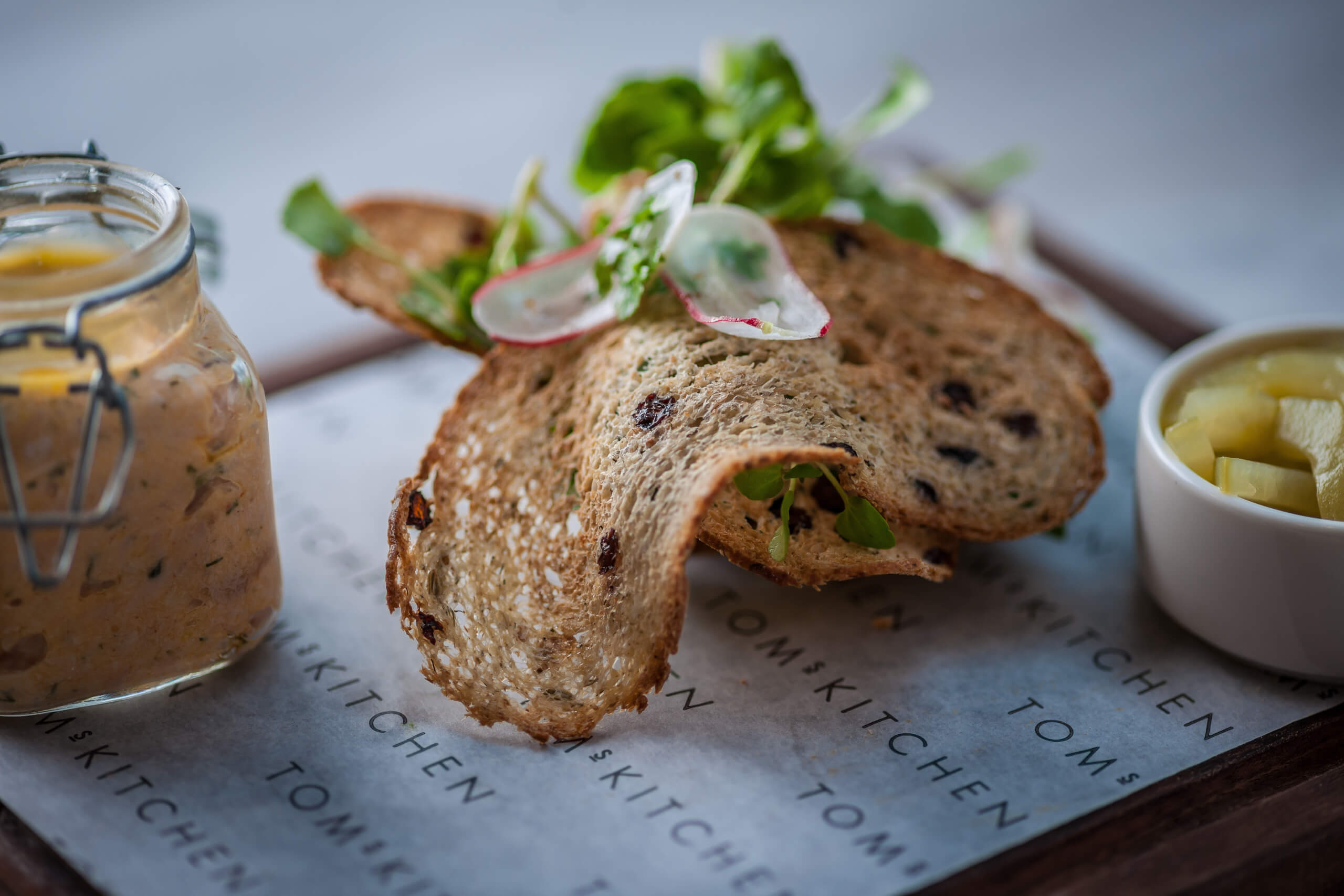 Tom’s Kitchen is perfect for an easy supper, and post-work chill out. It’s relaxed and uncrushed – unlike many high-turnover cover restaurants – and you can spend hours merrily there. Forget everything you suspect about restaurant franchises, and make your way down to Tom’s Kitchen for a taste of all things that are great about Great Britain.