Drink / Bars / About Time: For a Foodie Tour of Seville

About Time: For a Foodie Tour of SevilleBy David Hillier

Seville’s culinary culture is tied indelibly with its identity, as much as flamenco dancing, bullfighting or the bewildering sun that makes it the hottest city in Europe. Mention the city to anyone that has spent any amount of time there and memories of its food pillars instantly come to the fore – salmarejo, adobo, patatas bravas, jamon iberico…

On the surface the food is defined by simplicity. It’s about one, two or three kick ass ingredients with big flavours, mostly fried, cooked without haste and with a glass of local ribera wine in the belly. 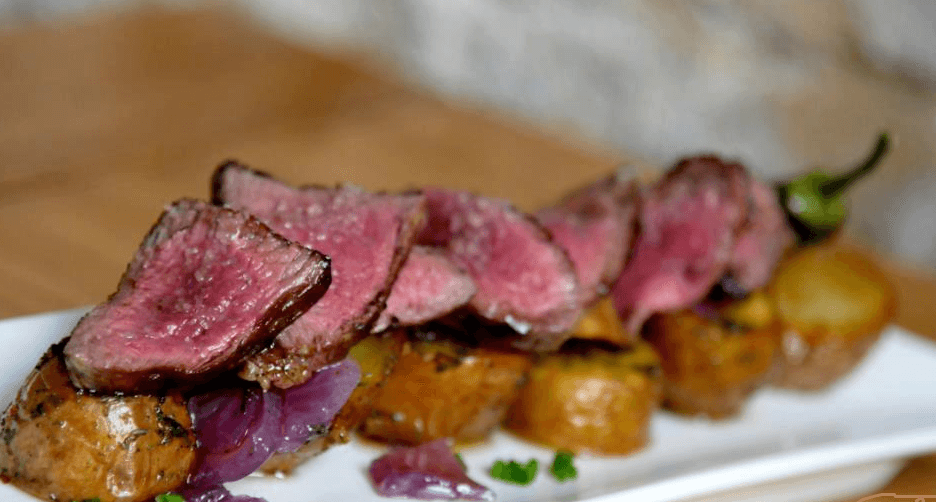 The reason for this simplicity is nothing to do with a lack of imagination and everything do with quality. Seville is the capital city of the autonomous region of Andalusia, and almost all of the central components of Andalusian food come from there: olive oil from Jaen, tomatoes from Almeria, jamon from Huelva, fish from Tarifa.

Andalusia produces something like 7.5 million tonnes of veg a year and 2 million tonnes of fruit. Although a fair amount of that obviously ends up on foreign soil, it also forms the basis for the food the locals make, and means it is naturally flavourful and of life-affirming quality. 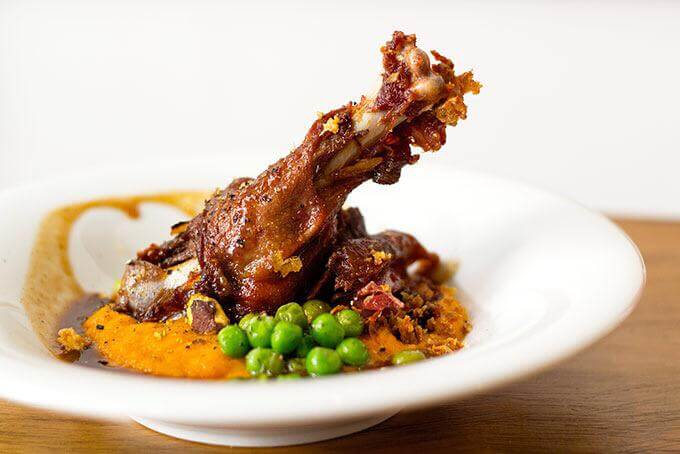 Gradually, Seville is developing its restaurant scene and taking in influences from other areas. At its heart, however, are the foods of the goodship Andalusia. With that in mind, here are a bunch of places the aspiring foodie needs to go to eat, buy and make the food of this wonderful area…

Sevillianos live late and eat late. Sit down for dinner before 10 and you’d consider it early knockings. If you’re walking the streets at midnight, 1am, you’ll see plenty of people sharing platters. 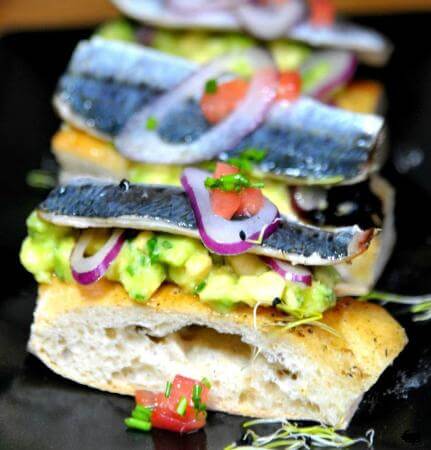 A testament to this place’s quality – and it’s good score on Trip Advisor- is that it opens at 8.30, and by 8.45 it is rammo with locals and tourists alike. Somewhere in the middle between traditional Andalusian tabernas and haute cuisine, it’s about presenting the fruits of the region in a way that is modern but uncomplicated. The menu changes from time to time, but when I went the mushroom and gorgonzola risotto was flashed with the kind of creamy richness the ingredients suggest, while the crusted tuna tataki was a brilliantly tender flash of the East in this most southernmost part of Europe. 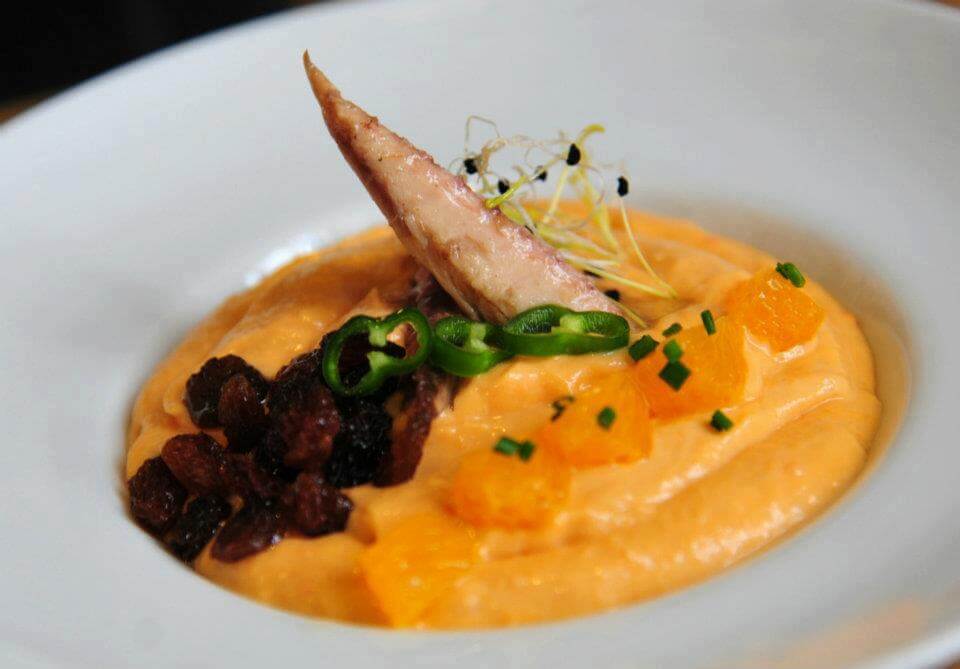 Bit of an admission here: your writer (hi there) lived above this place, on Calle Recaredo. From the outside, it looks like any one of the traditional bars across the city: straight-backed, hardwood chairs propping up sun-blasted faces; weirdly shimmering jamons swinging precariously above a barman’s head; silver garden furniture sprawled across the pavement outside, filled with locals sharing strong smokes and long lunches. 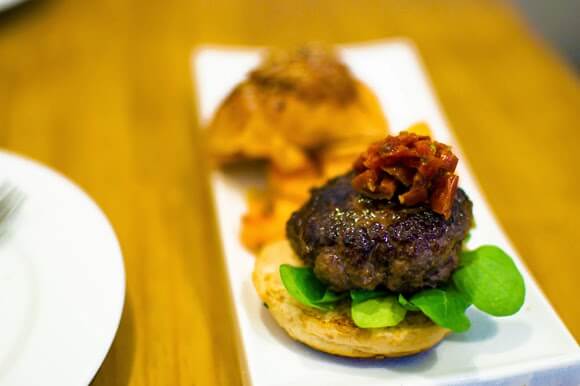 Befitting its everyhombre image, the food is competent, with a slightly more varied-than-usual menu. However, the reason it makes the cut is its carilladas . Carilladas are generally pig cheeks though they can also be ox. Something of a local delicacy and found all over the place, few restaurants do them with the simple, earthy qualities that these guys do. Swimming in a thick, gutter-brown gravy that is only partially soaked up by some sauteed potatoes, you would compare them to braised steak. But the flavours are so much more complex; there’s syrupy, oinky sweetness, propped up by potent sloshes of white wine. It’s the sort of food you’d probably associate with a winter’s day, except it rarely feels like winter in Seville. More reason to go there and get some.

If you’re a vegetarian you’ll be happier here than in most places. A lot of the food has an Italo-African slant, and you will find grilled bruschettas covered with melted provolone and oregano, and vegetable tagines. There’s actually an African influence in a lot of traditional Sevillian food: a throwback to the area’s 500-odd year Moorish occupation from 712. 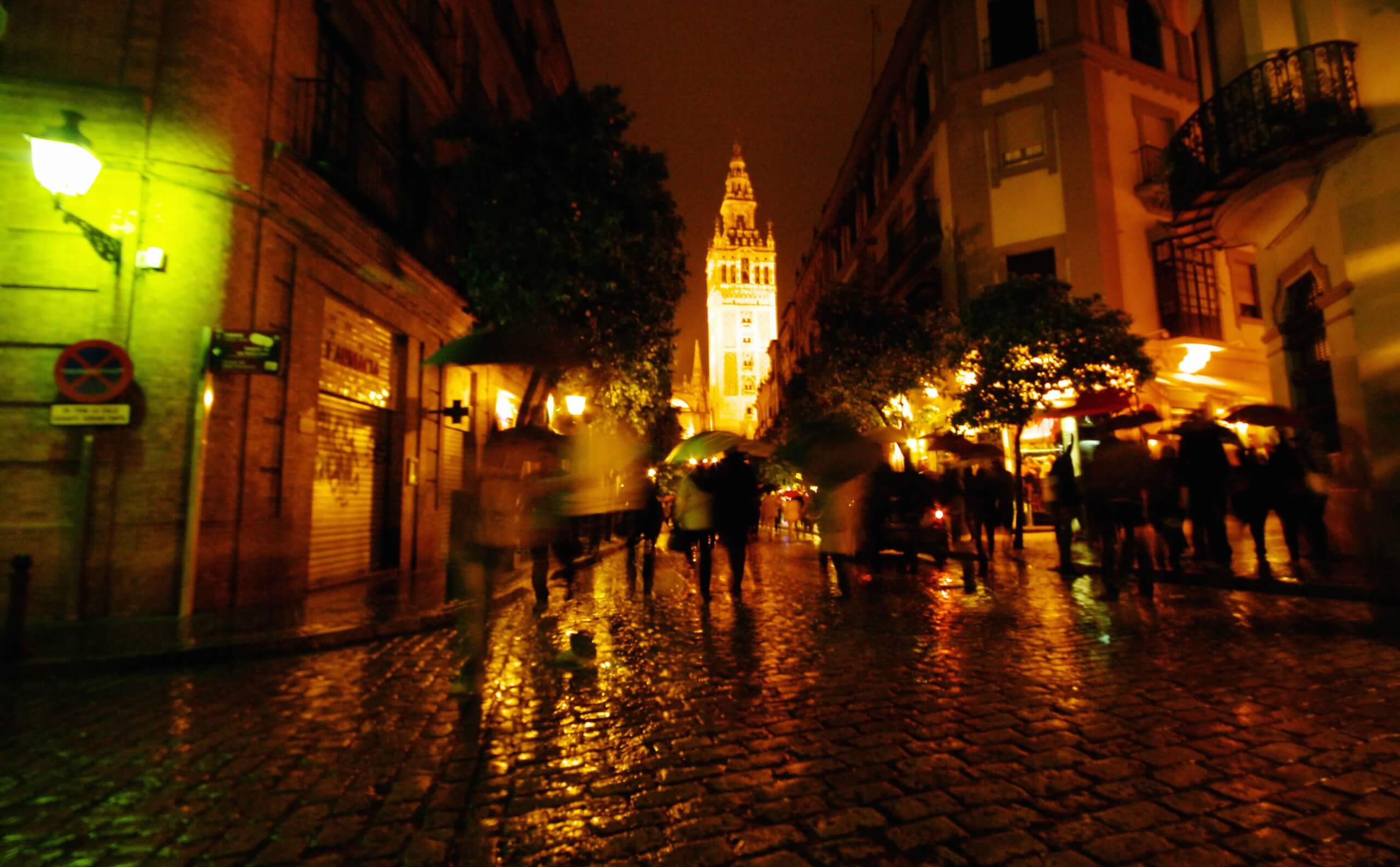 It’s not all vegetarian though, and whether you just want some iberico de bellotta – acorn fed ham, pretty much the best in the world and over 18 quid per 100 GRAMS last time I looked at Brindisa down Borough Market- or some homemade paella, you’re covered. There’s enough room for about 30 people in there at absolute most, so your elbows can expect to be busy. Well worth it, though, and and helped even more by the rock and roll soundtrack normally playing out.

Everyone’s been to La Boqueria in Barcelona now, and trying to drop in that you went to Pintoxo there just doesn’t do the business anymore. In that respect the food market at Triana is relatively unchartered territory, which of course makes it a must-see for the foodie with an eye on their Instagram account. 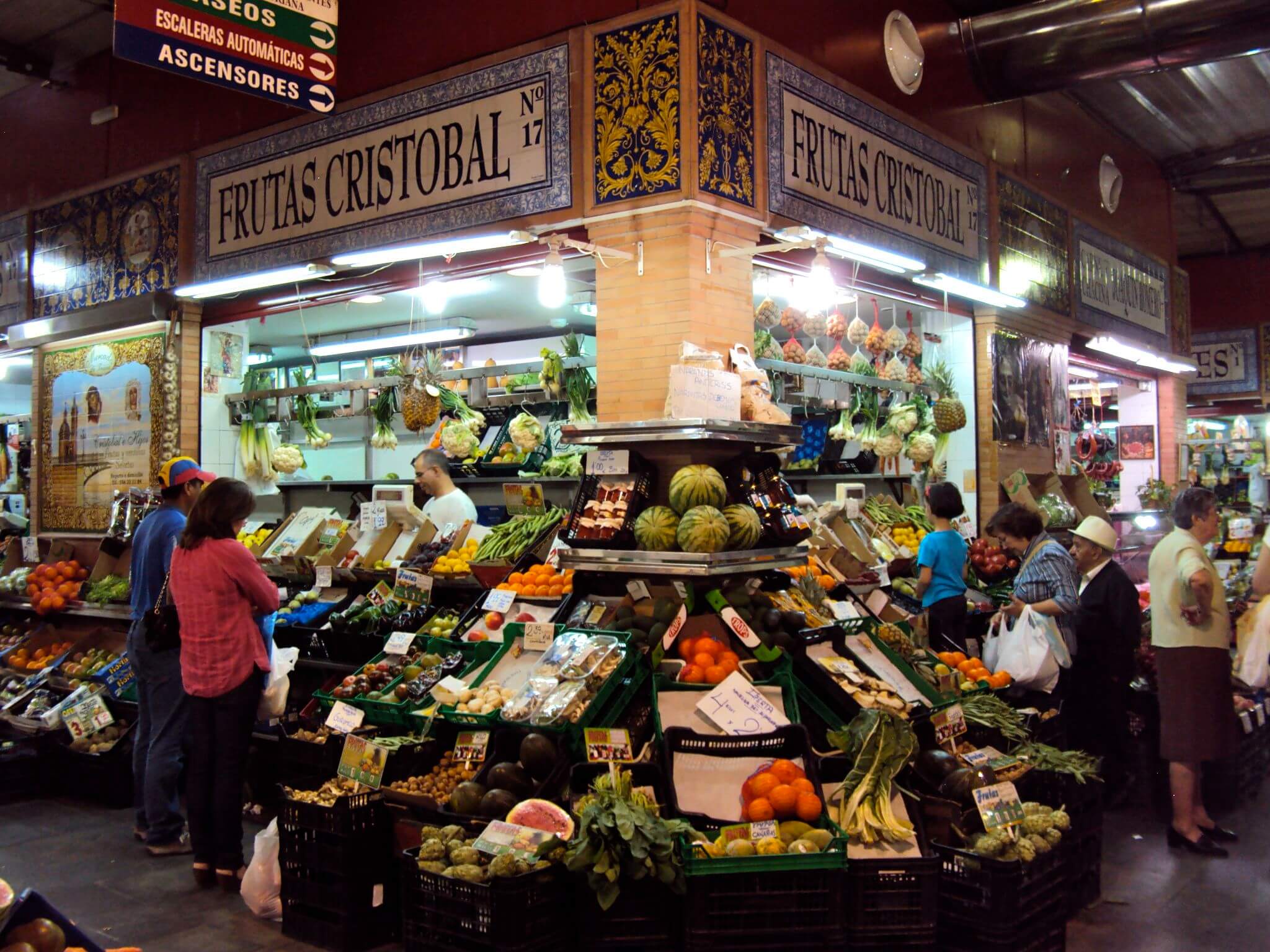 Thankfully, Triana provides a lot more than just a few new followers with its rows of carnicerias and pescaderias (meat and fish stalls, basically). Somewhat surprisingly, you’ll also be able to get sushi made from fish caught down the road, though if you want something a bit more local come in early for some breakfast churros with the locals.

It opens at 9, shuts at 3 and the best time to get down is Saturday morning. If you really want the Q10 (not sure that’s a thing but running with it) then come along to one of the free tours run by Taller Andaluz de Cocina. They are based in the market, and do daily cooking workshops as well as tours. The workshops aren’t free, but they are run by former Michelin chef Victor Silvestre Gil; a premium dude who will teach you how to cook amazing food that will make people want to have sex with you. Which is good.

Belinda Carlisle don’t know jack. Heaven is not just any place on Earth. Heaven is walking up the Avenida de la Constitucion, gracelessly inhaling these guy’s goats cheese and quince jelly ice cream. I don’t even have much of a sweet tooth, but this salty, creamy, fruity splodge is up there with with the most memorable things I’ve ever put in my face. 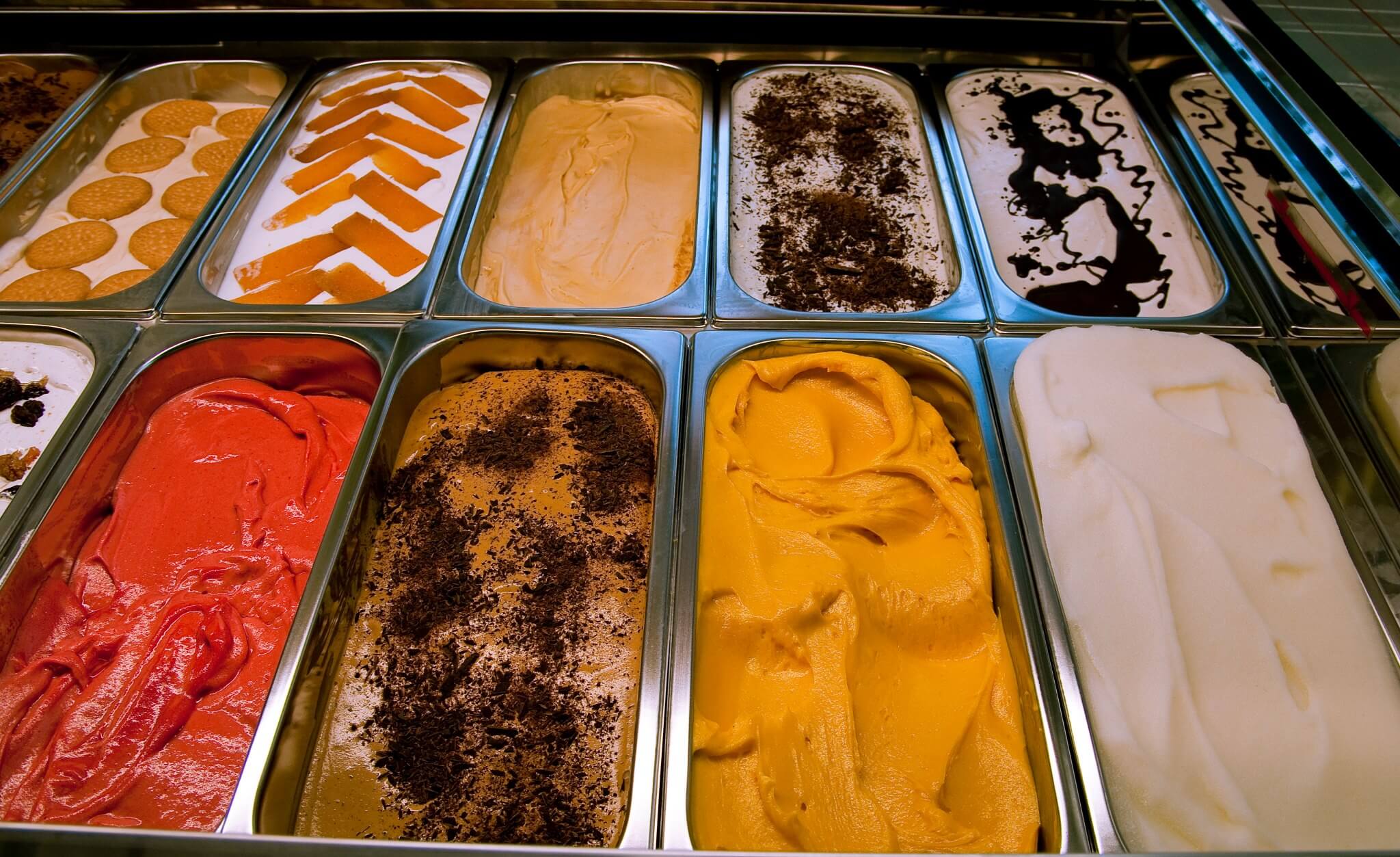 They have got a bit of a cult following and it’s not hard to see why. Master Craftsmen Antonino Grill whips the stuff up every morning, and apparently tries each one (he told me his favourite was pistachio). You can try as many as you want before buying, and when you do eventually make a decision, on top they give you a little bonus taster of one you hadn’t got round to sampling.

Last time I was there, I swear this is true, Antonino’s assistant was this angelic opera singing girl from Portugal who burst into sad, beatific song every time she went out back, before bounding out with joy on her face and helados in her hand. Take that, Belinda. 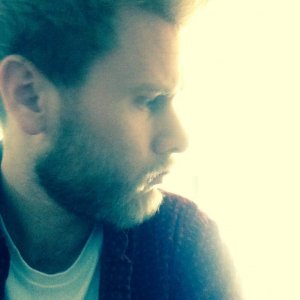