It’s that time of year again, when the days become short, the nights become long and – in a more recent tradition – the chance of a Christmas abroad in the sun becomes…unknown.

Things are already uncertain enough without having to work out which bottles really glimmer from the overwhelming wave of new whiskies being washed up for parched consumers and festive present buyers to choose from.

This year’s About Time Whisky Guide has done the hard work for you. Think of it like a ray of sunshine beating through the crowded grey skies, highlighting only the most brilliant bottles available right now.

Every whisky on the list has been thoroughly taste-tested (- yes, it’s a hard, hard life). Nothing has been included because someone somewhere somehow thinks this particular first edition special bottling could potentially become valuable at some point someday in the future.

These are whiskies for drinking, for sitting back and having a moment of malt-induced meditation, for forgetting about your cancelled holiday in Cape Town and the looming supply-chain crisis, a chance to meet some of the most innovative new whisky makers in the industry, as well as experimental editions from old friends. 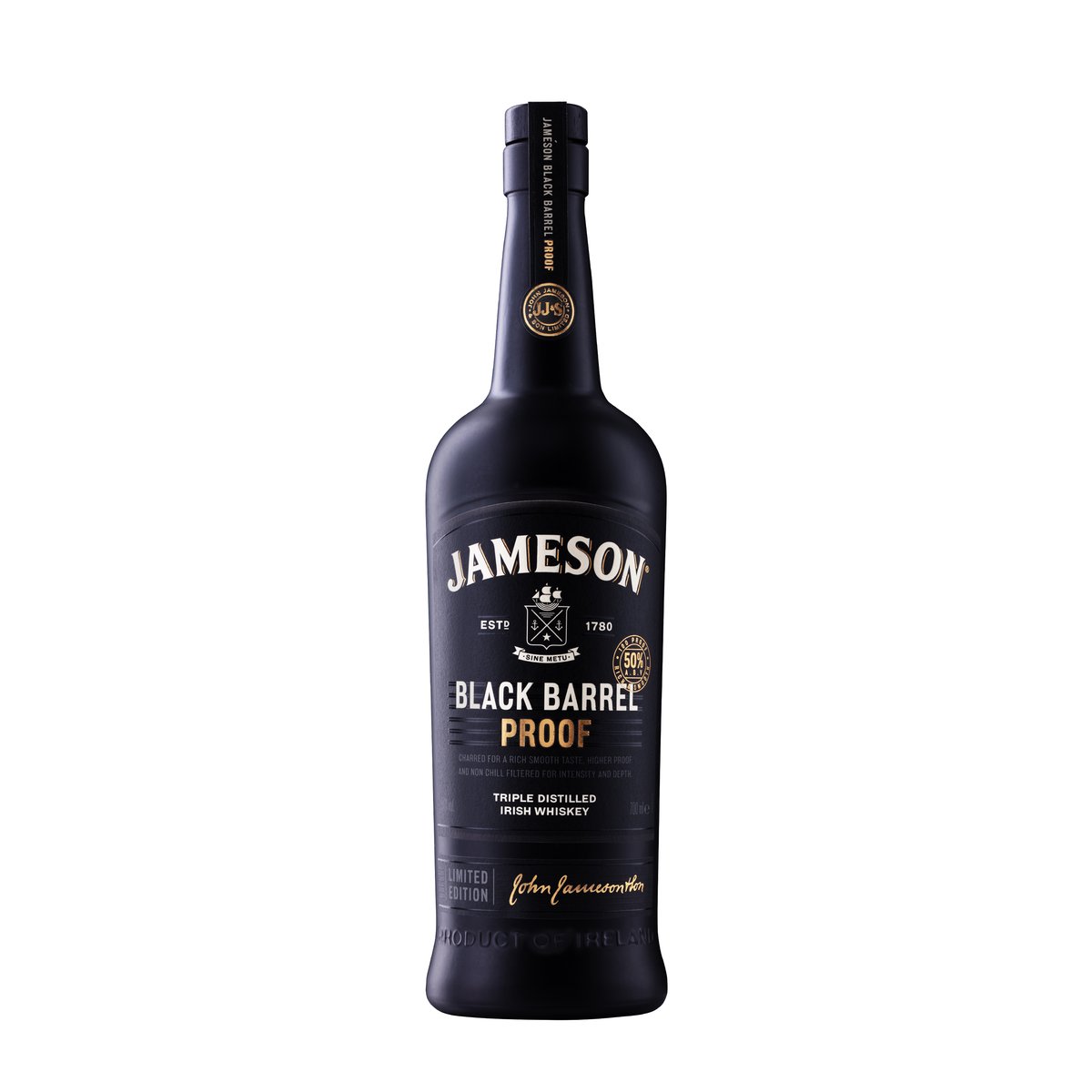 Jameson is normally something of a work-horse whisky: absolutely fine to drink in almost any setting but it’s never going to set your world on fire. The ‘Black Barrel’ edition is an upgrade, but this new version – bottled at a higher 50% strength – opens up an entirely different dimension to this classic Irish whiskey. The flavour is dramatically amped up, with big-hitting cereal and toffee notes. The signature smoothness and easy-going Jameson nature is still there, but with a depth that can rival far more expensive and celebrated whiskies. A must for Jameson fans. 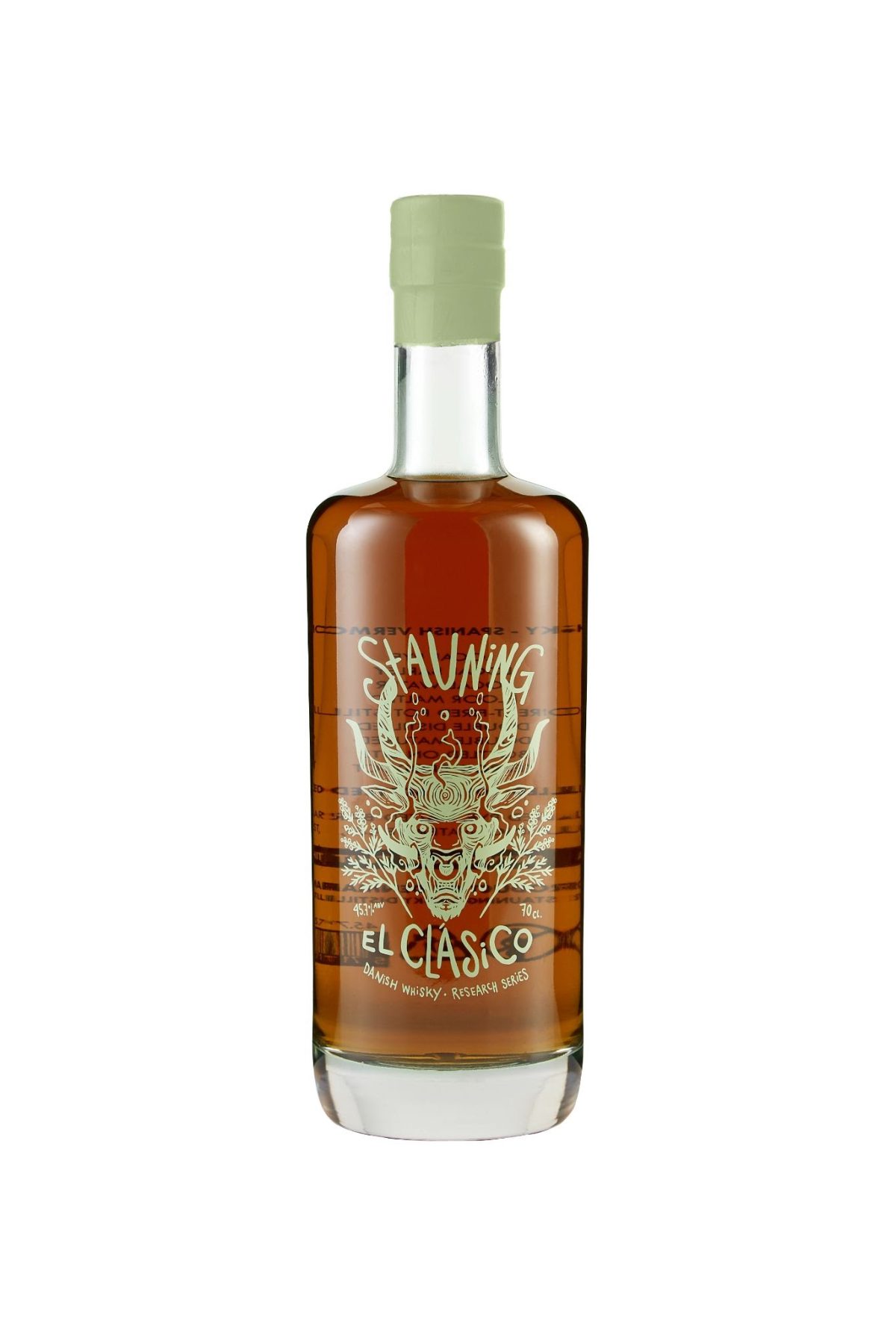 There is absolutely nothing ‘clásico’ about this Danish rye whiskey aged in vermouth casks; in fact it’s one of the most radically original whiskies I’ve ever tasted. Spice and rye-bread from the whiskey meld with tangy sweet and herbal notes from the vermouth, followed by a hint of botanical bitterness. It’s completely bonkers… tasting something like a mix between a Scotch and a Negroni. Innovative, delicious and a great talking point. 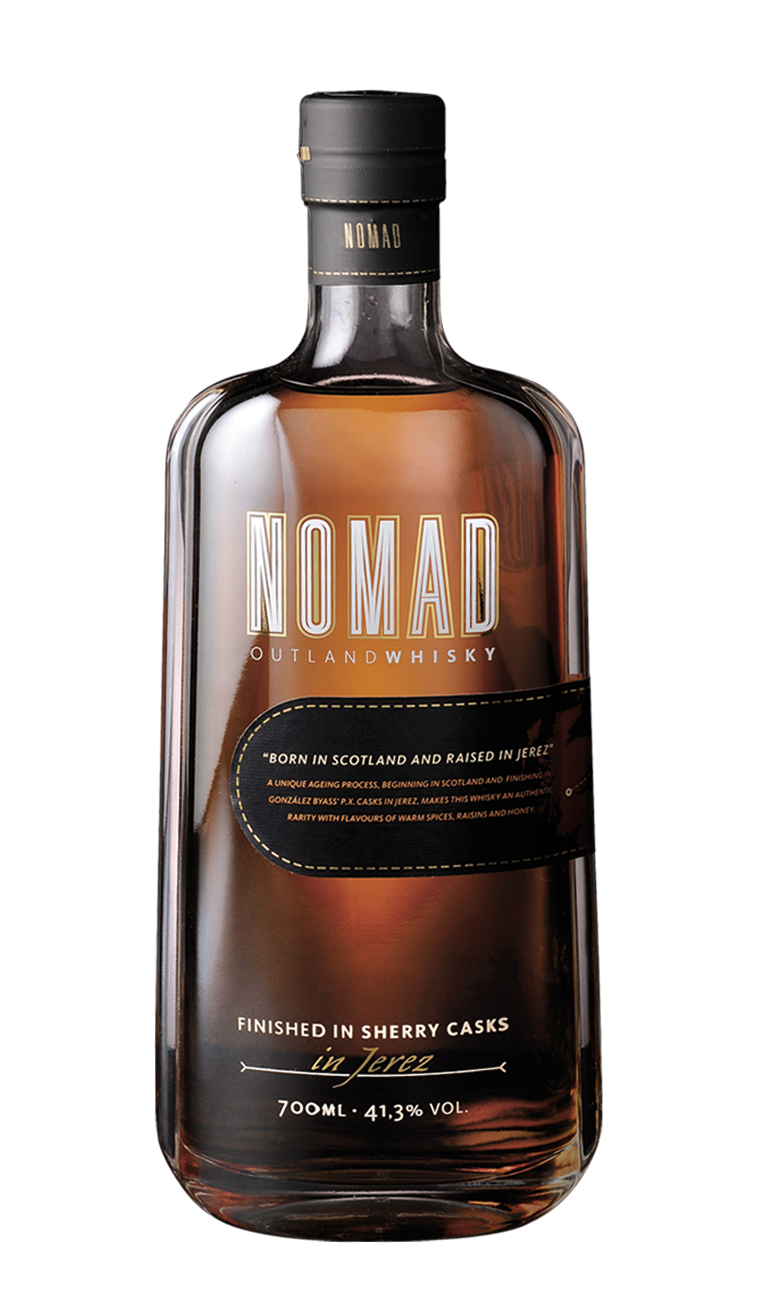 By far the cheapest whisky on the list and – for fans of sweet sherry cask aged whiskies – surely one of the best value bottles in the world. It’s a blend aged initially in Scotland before being transported to the home of sherry, Jerez in Spain, for a year in Pedro Ximenez casks. It’s very very sweet, very smooth, very drinkable, with relatively straightforward flavours of raisins and honey. Look, for less than £30 you’re never going to get a particularly complex whisky, but for new drinkers and those partial to a slightly sweeter dram this is a winner.

The annual Xmas release from The Whisky Exchange is always so reliably excellent, it doesn’t matter that you don’t officially know which distillery/ies it comes from ( – note, it’s almost certainly Highland Park this time). Last year’s was an absolute superstar, a deep and decadent 19 year-old blend and my most recommended whisky of 2020.  This year’s 16 year-old single malt is more restrained but still a class act, rich and malty, with orange, cloves and a very slight hint of smoke. As ever with these releases, there’s a hell of a lot going on when it comes to flavour. As ever with these releases, it’s a knock-out whisky. 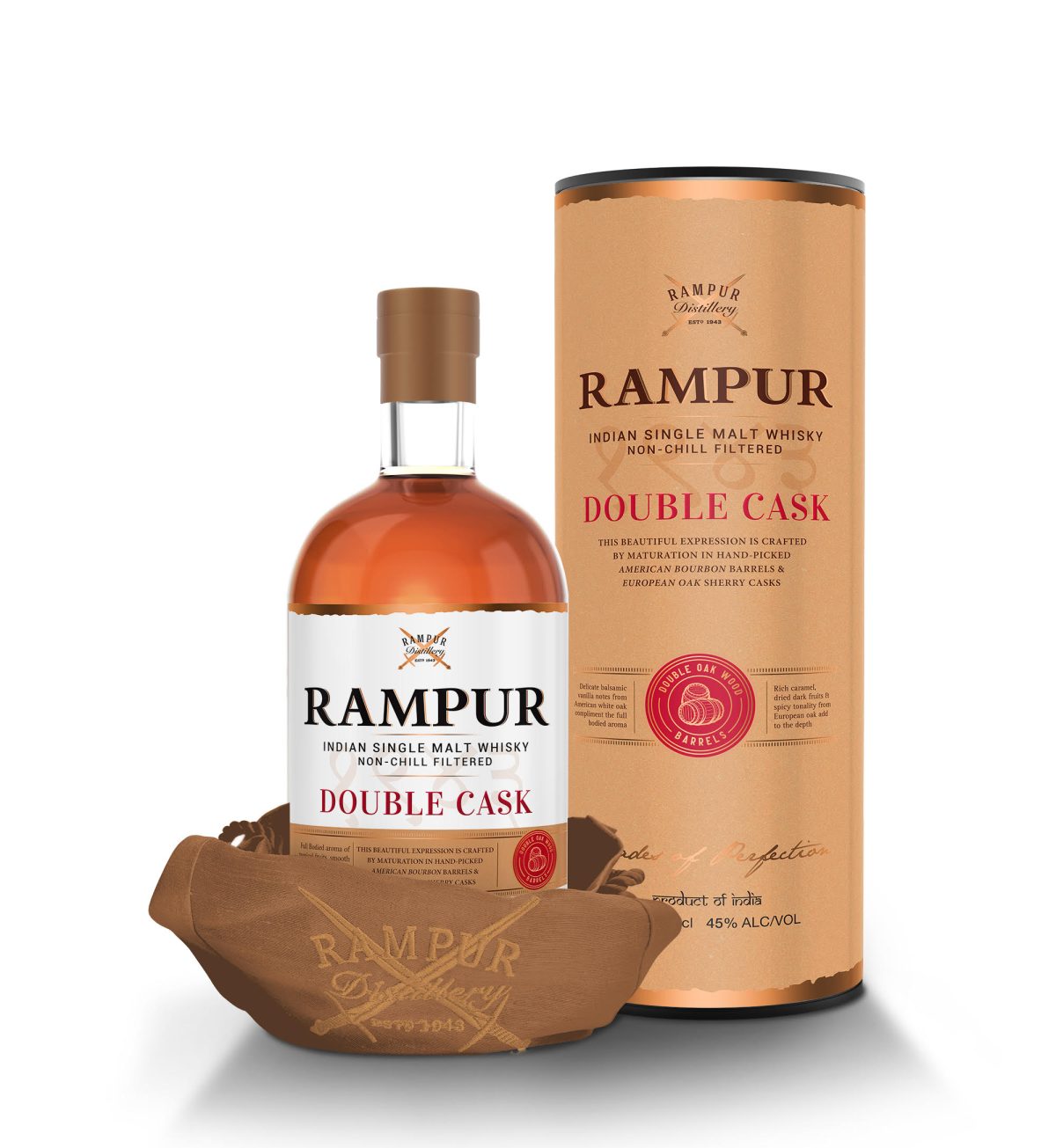 Once upon a time, whisky from India was a novelty. Now there’s not one, not two, but three powerhouse Indian distilleries creating bottles celebrated across the globe. What a wonderfully interconnected world we live in. Amrut and Paul John are by far the most famous, but the flavour of Rampur is more unique. Dancing with tropical fruit flavours, especially grapefruit
(blind tasting proved this wasn’t geographic power of suggestion), as well as vanilla and a hint of spice, this is a fresh, juicy whisky with a big identity. Even for know-it-alls familiar with Indian whiskies, this offers something completely different.

Glenmorangie ‘A Tale of Winter’

Another seemingly annual festive release, the limited edition ‘A Tale of…’ series appears to be where Glenmorangie gets funky. Last year they tried to recreate the sensation of eating cake, this year the concept is slightly more… nebulous: ‘the cosiness of wrapping up in a winter jumper while the world outside is blanketed with snow.’ According to Glenmorangie the taste of that very specific sensation is a 13 year-old whisky aged in Marsala wine casks. Pretty unusual. To me at least, it tastes incredibly festive – a bit like mince pies – with sweet spiced boozy nutty raisin notes. There’s also a really interesting savoury moreish musty note from the casks, perhaps that represents old woolen jumpers? Whisky synaesthesia never tasted so good. 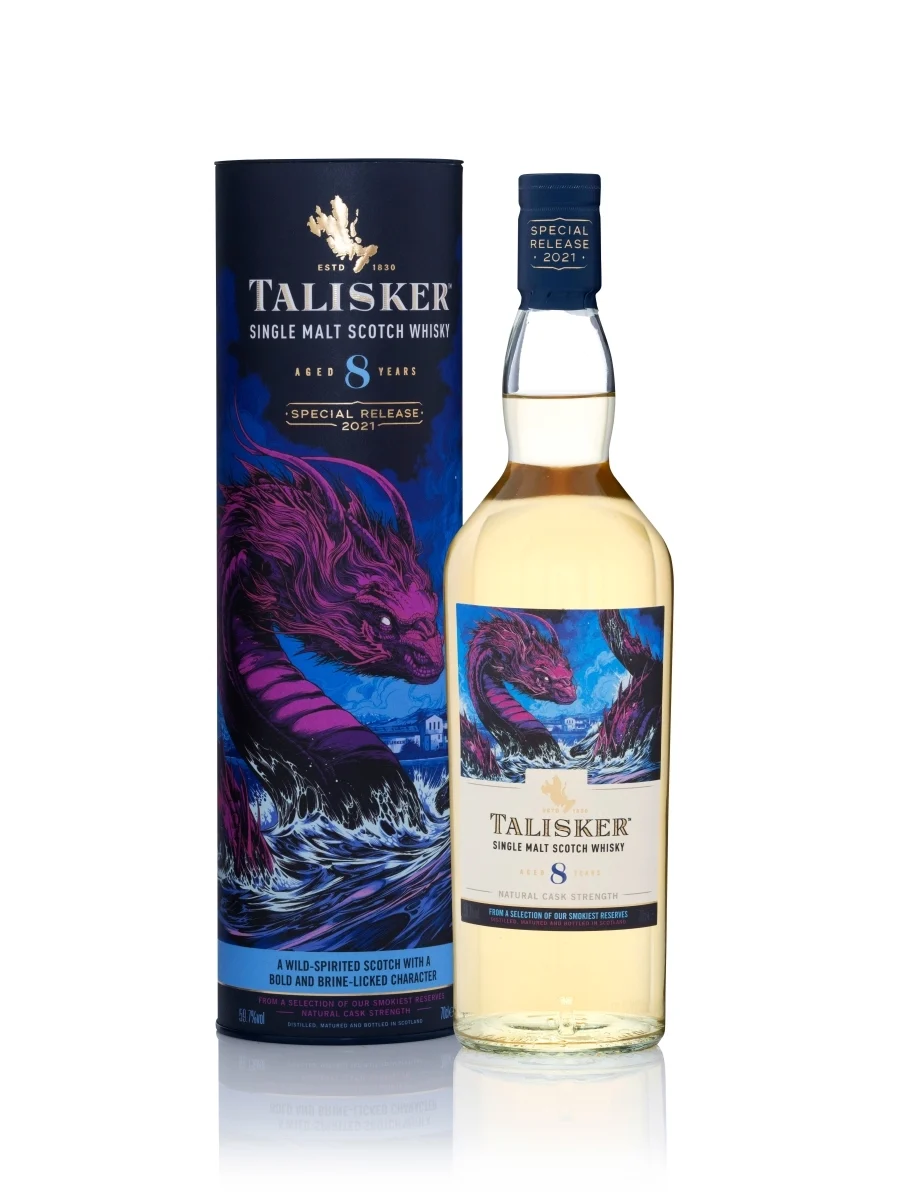 Heat. Peat. Sweet. That’s really all you need to know… but the editor says 3 word rhyming reviews have gone out of fashion. This limited edition Talisker is bottled at a massive 59.7% giving it a huge, powerful, fiery kick. (A drop of water helps to tame this absolute monster of a whisky). It’s been aged in some of their most heavily peated casks, so there’s an almost medicinal smokiness punching through the sweet vanilla of the 8 year-old whisky. There’s something refreshingly straightforward and uncompromising about this special release, sure to be adored by peat purists. 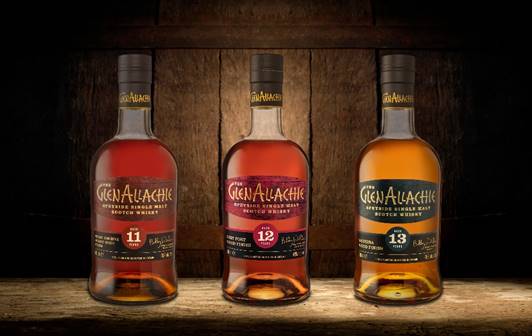 GlenAllachie is a name that isn’t well-known even amongst Scotch aficionados. Until recently, most of the stuff it produced went into blends but, in 2017, it was bought out and became one of Scotland’s few privately owned distilleries. History lesson out of the way, let’s focus on the stuff inside the bottle, am I right? This comes from their limited ‘wood finished’ range. The wood in question is barrels that previously held ruby port, which has given a lovely jammy sweetness and prominent red wine notes to the honey forward whisky. If you like the syrupy side of sherry cask aged whiskies, this is a perfect step towards trying slightly more unorthodox finishes. 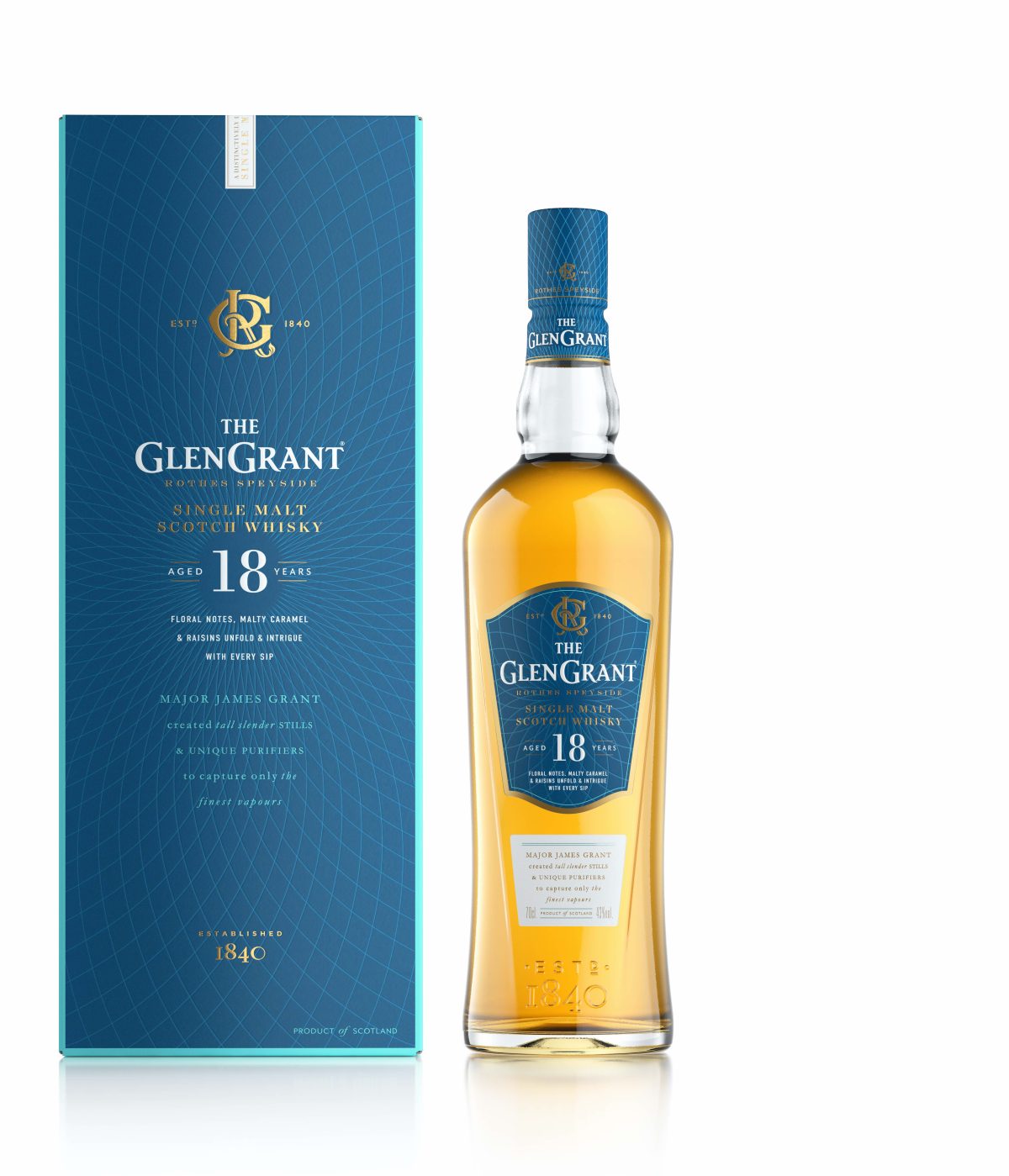 You may have noticed that many of the whiskies in this guide have been aged in specially selected unconventional casks, imparting distinctive flavours on the original spirit. But a whisky doesn’t need a fancy finish to be a stand-out. Sometimes a whisky can be straightforward and straight-up delicious. Glen Grant is oft overlooked in the UK but this 18 year-old deserves attention. Malty, cereal and vanilla notes combine for a delicate, perfectly balanced and seriously smooth whisky. It isn’t overly-complicated, it has no peat, there’s no unusual barrel ageing. And you know what, it’s all the better for it. A well-made well-aged whisky that unashamedly tastes…like whisky. A whisky that believes in itself. Good on you Glen Grant. 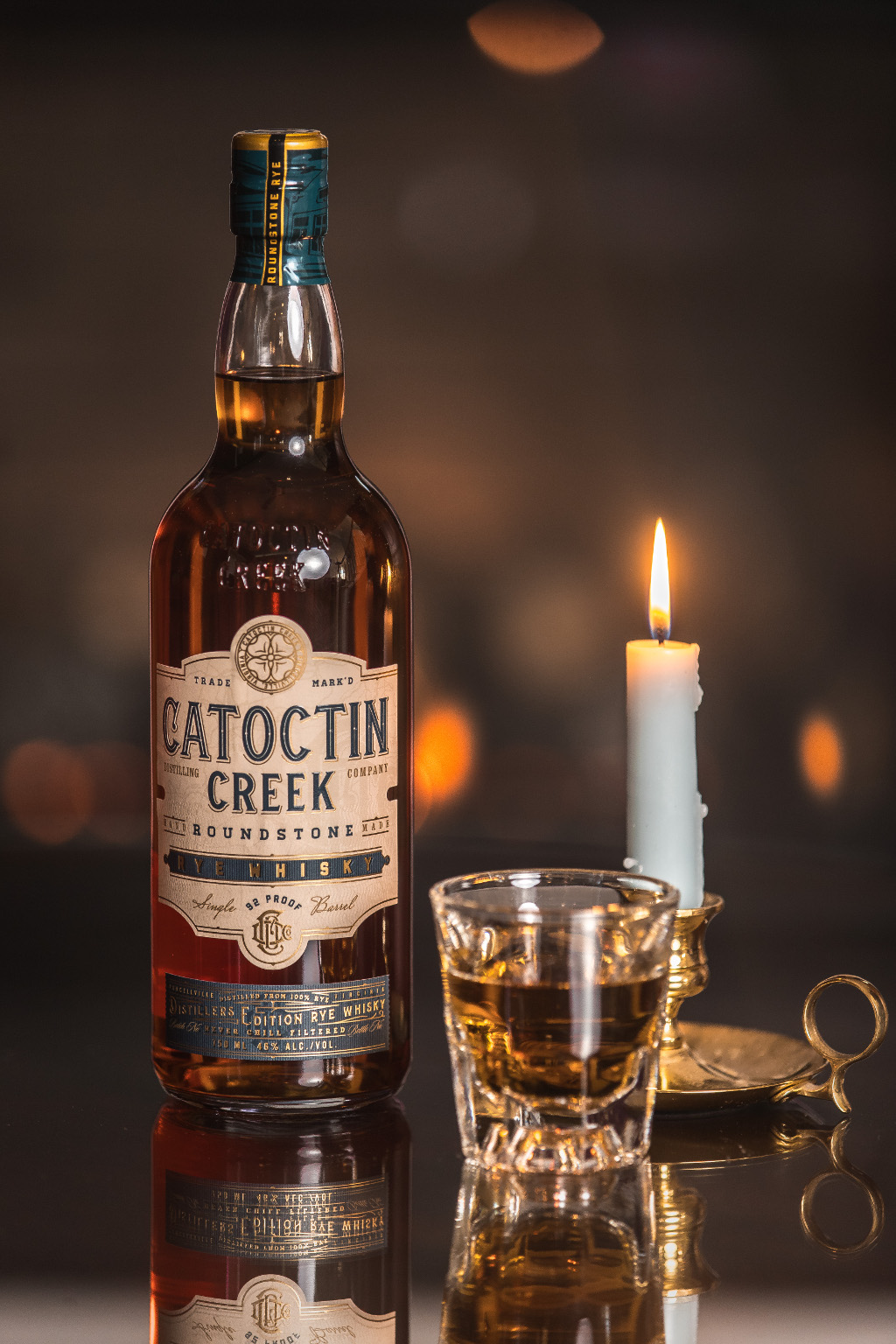 Once the preserve of bartenders, Manhattan cocktail makers and Americans, rye whiskey is now having something of a ‘craft’ moment across the world. Artisan distilleries are popping up and pushing this famously spicy spirit to its gustatory limits. This wonderful rye, however, harks back to those good ‘ole days. Made in the traditional Virginian style by a small, boutique distillery in Purcellville, Loudoun County, Virginia, the classic rye spice is complemented by rich and luxurious flavours of toffee, wood and pine. Bottled at a higher strength (46%), the ‘Distillers Edition’ uses only the most interesting barrels sat maturing in their barn. 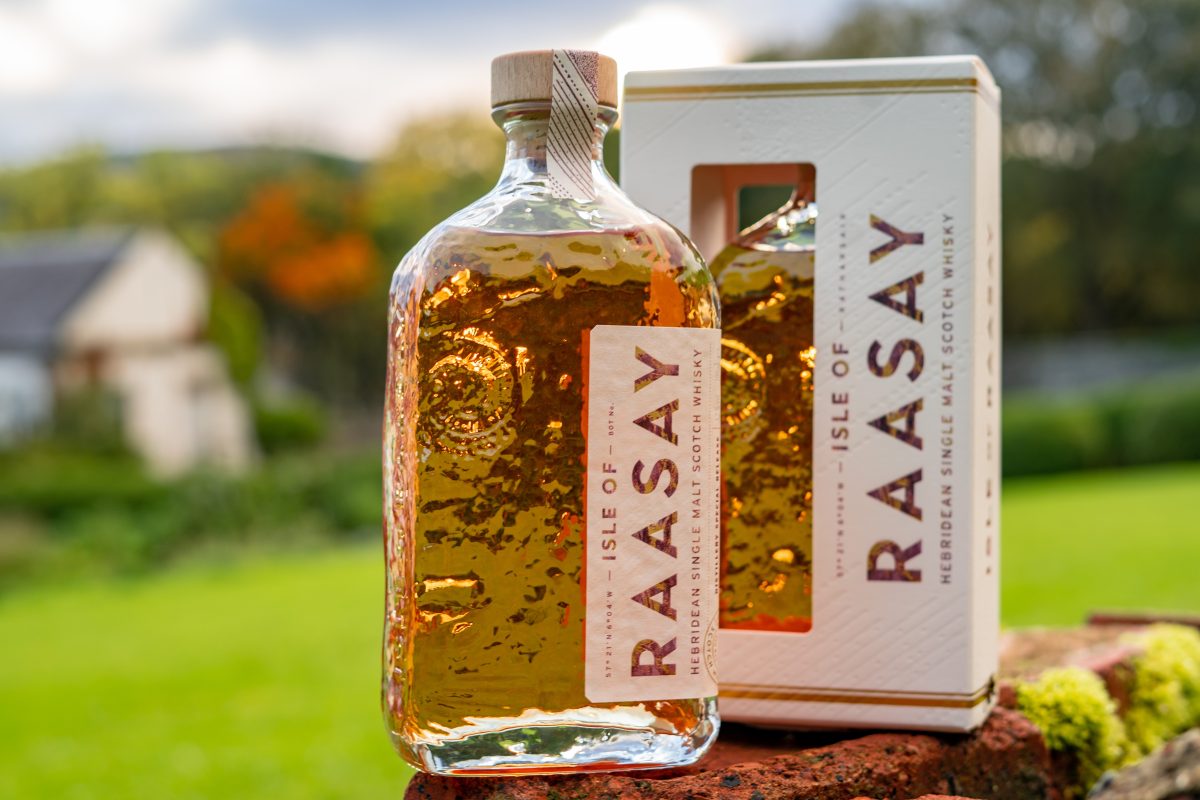 How do you turn a relatively unaged whisky into something packed full of flavour? As one of Scotland’s new whisky distilleries, Raasay has an unavoidable problem. It’s whiskies are young; there’s simply no way to conjure up an 18 year-old when you’ve only been open since 2017. But Raasay is already working on different ways to cram as much flavour as possible into its bottles. This special release has been aged in peated ex-rye casks as well as smaller Oloroso and Pedro Ximenez sherry casks. It’s punchy and gutsy, fruity, nutty and spicy, with a salty smoke holding it all together. The bottle itself is breathtakingly beautiful, featuring rugged glass and an indented fossil meant to evoke the wild and historic landscape of the island. It looks like a work  of art and would have pride of place on any whisky shelf.

Starward 2016 ‘Exclusive to the Whisky Exchange’

This is another young’un at 4 years old, but it’s an entirely different proposition. Made by the excellent Starward Distillery in sunny Melbourne, Australia, the warm climate ensures the whisky matures at a far quicker rate than if it were aged in Scotland. It means that in just four years, the spirit has acquired a superb depth of flavour. It’s spent time in Apera casks (a type of Australian fortified wine) and bursts with sweet and tart dried fruit notes – think raisins and apricots – as well as peach, vanilla and apple. There are just 246 bottles in this lovely and very exclusive Whisky Exchange release. 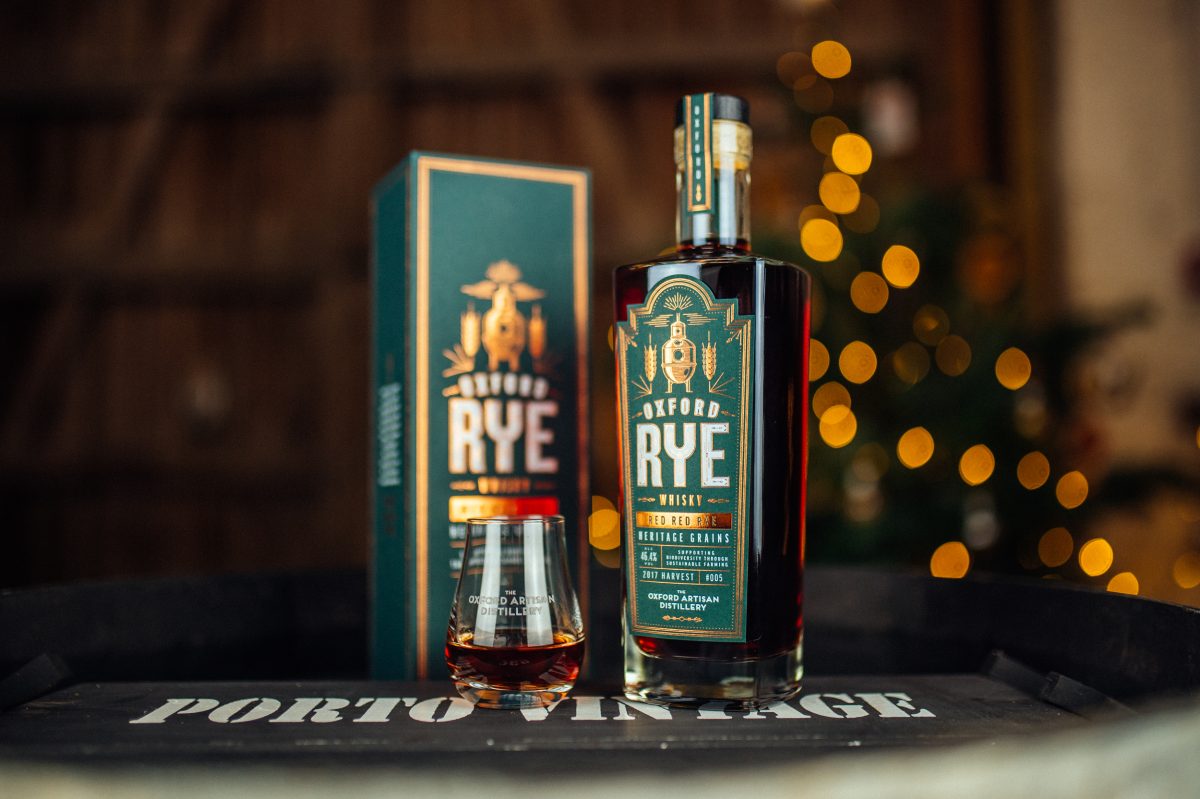 Perhaps saving the best til last, this experimental whiskey constantly came out on top in blind tastings. It’s another which pushes the boundaries of whiskey flavour. A rye made with heritage grains (as well as a few oats and thistles) in Oxford and matured in 4 different casks including two types of vintage port. The result is spectacular. It’s crimson colour is eye-catching, it’s so very red that it doesn’t even look like whiskey. The flavour is totally unique, a sprinkling of spice from the rye, massive sweet red berries from some of the casks, earthy notes from the others. It feels like there are tannins that could almost match a hearty Italian red. This rich, tangy and complex rye – which doesn’t taste like a rye (or anything else for that matter) – may well upset traditionalists. But this is an example of experimentation gone totally right.