Wondering what to eat in Los Angeles? As you might have spotted from our not-so-subtle Instagram feeds, we’re in LA this month. We’ve been getting lots of messages about where to eat in LA, so we thought we’d tip you off with some of our favourite eats in the city so far. There’s so many greats eats in LA, if you only know where to look… 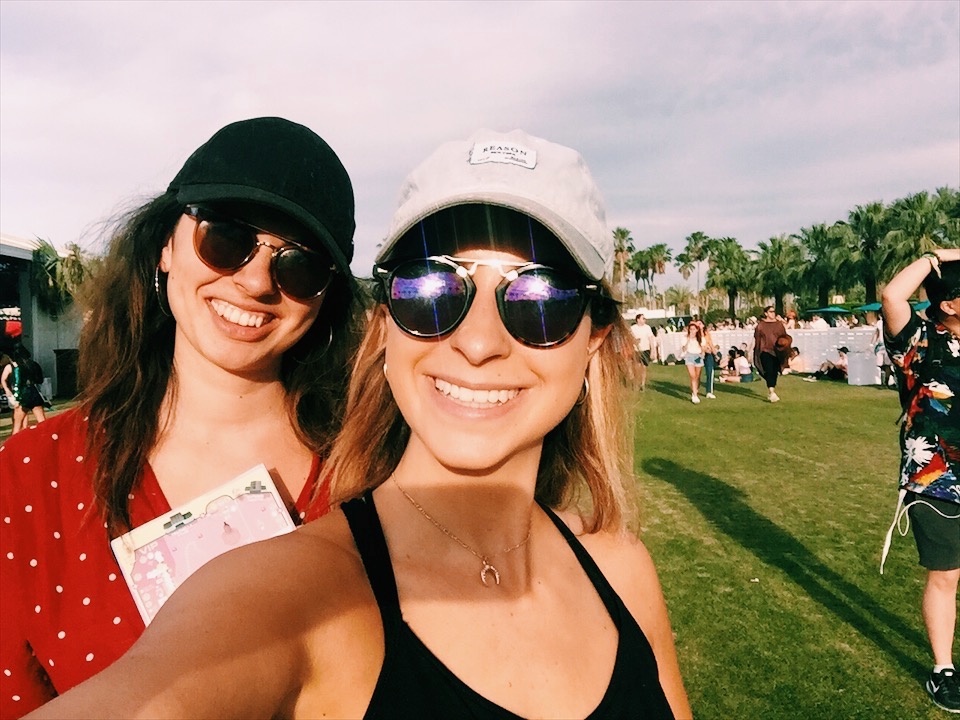 Here’s 10 things you need to eat in LA, About Time style: 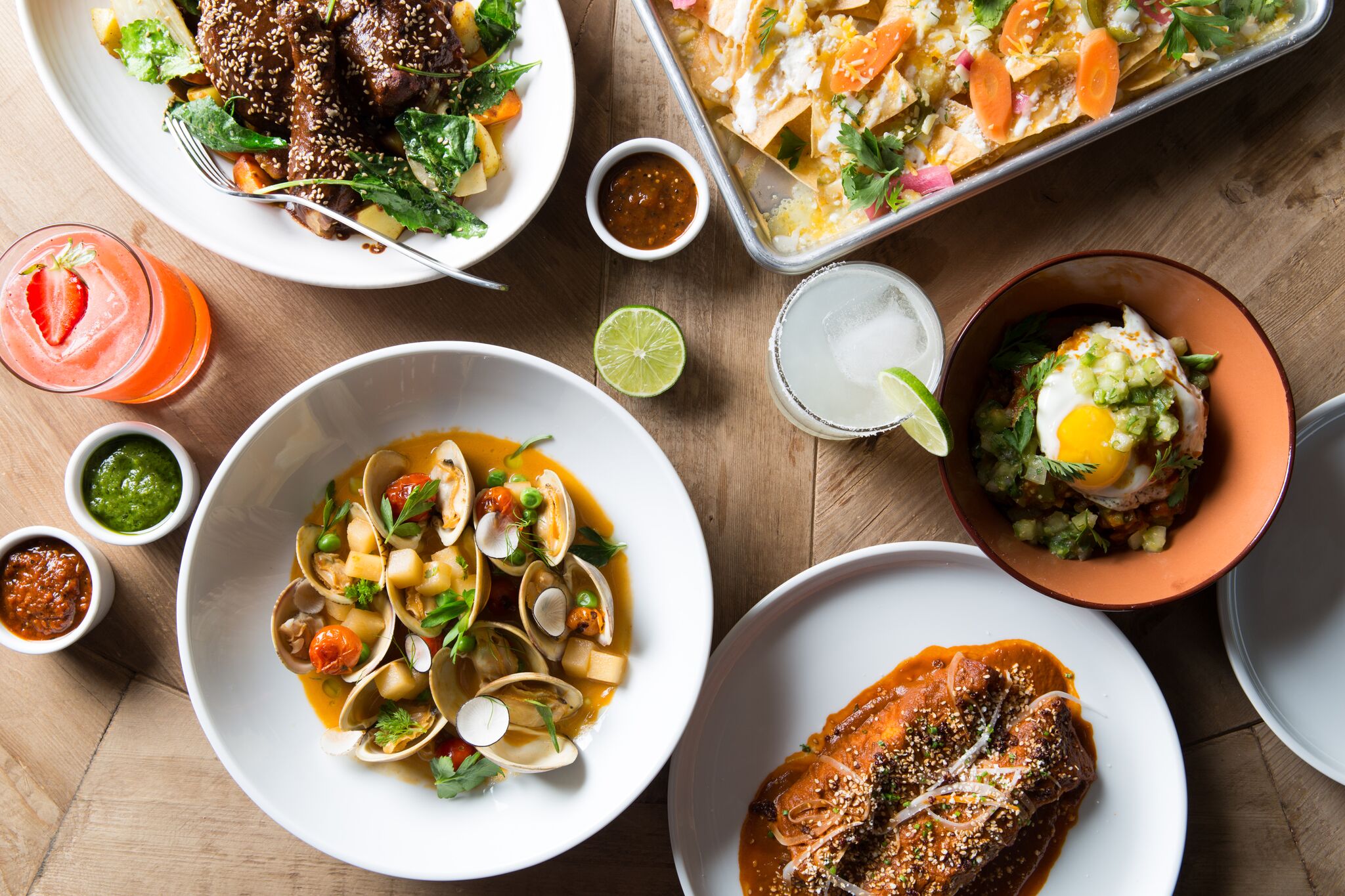 What They Say: Tallula’s is an ingredient-driven, neighborhood Mexican restaurant in Santa Monica Canyon, right by the beach. Josh and Zoe both grew up going to this location in its former incarnation as Marix Tex Mex, and long dreamed of doing their own personal project in this space. When the opportunity came up, they partnered with Rustic Canyon Chef Jeremy Fox, and are now fulfilling their dream of having a neighborhood Mexican restaurant that sources its ingredients from the Santa Monica Farmer’s Market with top-quality produce.

What We Say: Some of the best Mexican food we’ve had in Los Angeles. The tacos are out of this world – our personal favourite were the grilled swordfish taco with red sauerkraut, dill, epazote and malt aioli and the organic chicken tinga tacos with cabbage, radish, cilantro and chipotle. You can’t miss their delicious appetizers too – try the arroz verde, toasted green rice with farmers market vegetables, herbs and aji amarillo aioli and the grilled asparagus with roasted garlic. Don’t leave without trying their churros with Mexican chocolate sauce. So. Good. 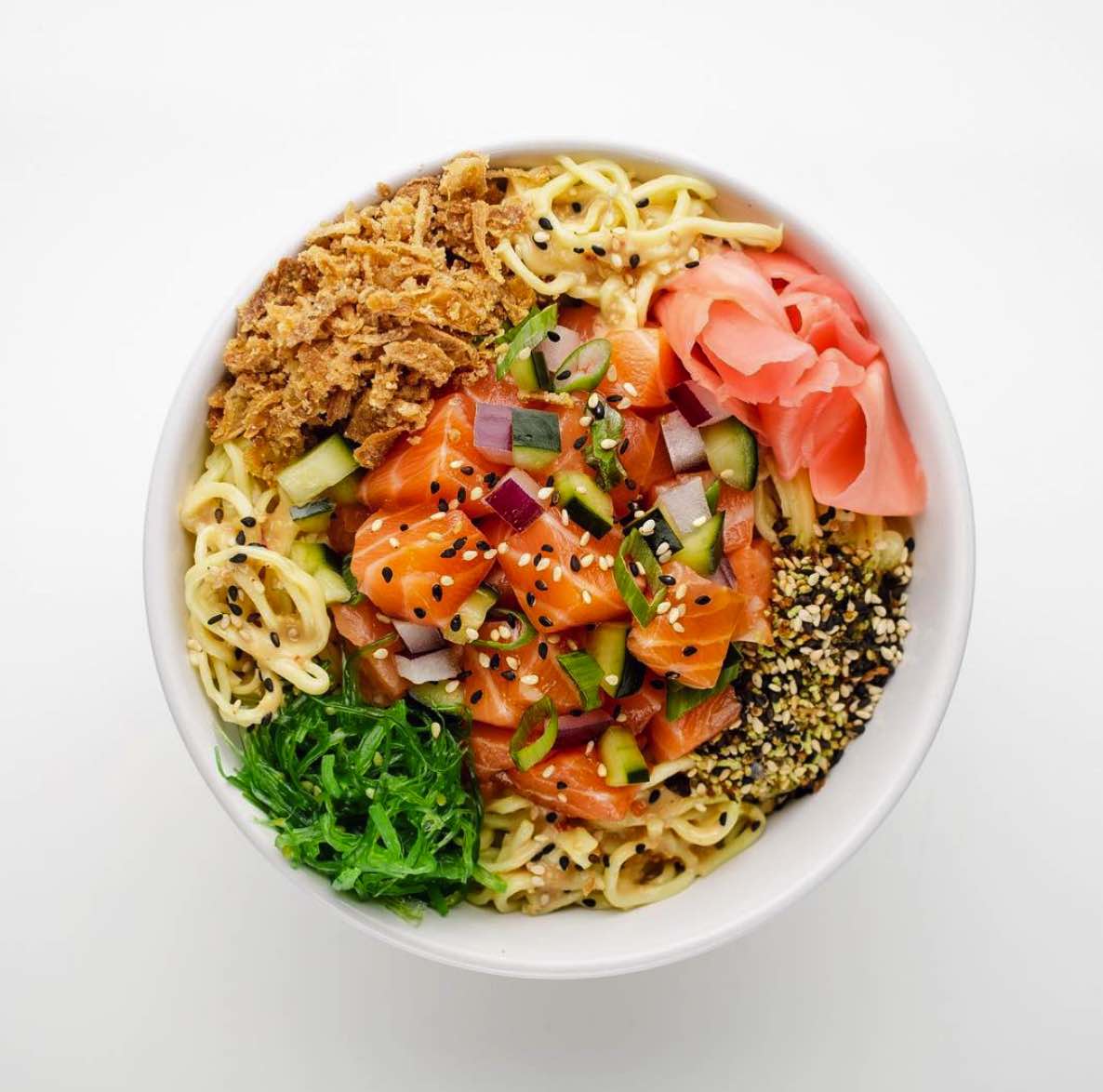 What They Say: Alan Jackson is the founder and vision behind Lemonade, enticing Californians with the simple allure of beautifully prepared salads, hearty braised meats, satisfying sandwiches, decadent desserts, and of course, thirst-quenching lemonades. A California native, Alan named the restaurant “Lemonade” because of the bright and comforting feeling you get when you simply say the word. Ever growing, Lemonade now has 28 locations throughout Los Angeles and surrounding areas, Orange County, San Diego, and the Bay Area.

What We Say: One of the best grab and go options in LA. We love their salad bar, where you can create your own lunch, choosing between a protein and 2 sides. It’s a really balanced, healthy way to eat and they have some great warm bowls too (the mango chicken salad is our favourite). There’s some great salads to choose from, including tuna poke with clementines, turkey salad and freshly-made pesto pasta salad. Great stuff.

Where: Locations throughout LA – see here. 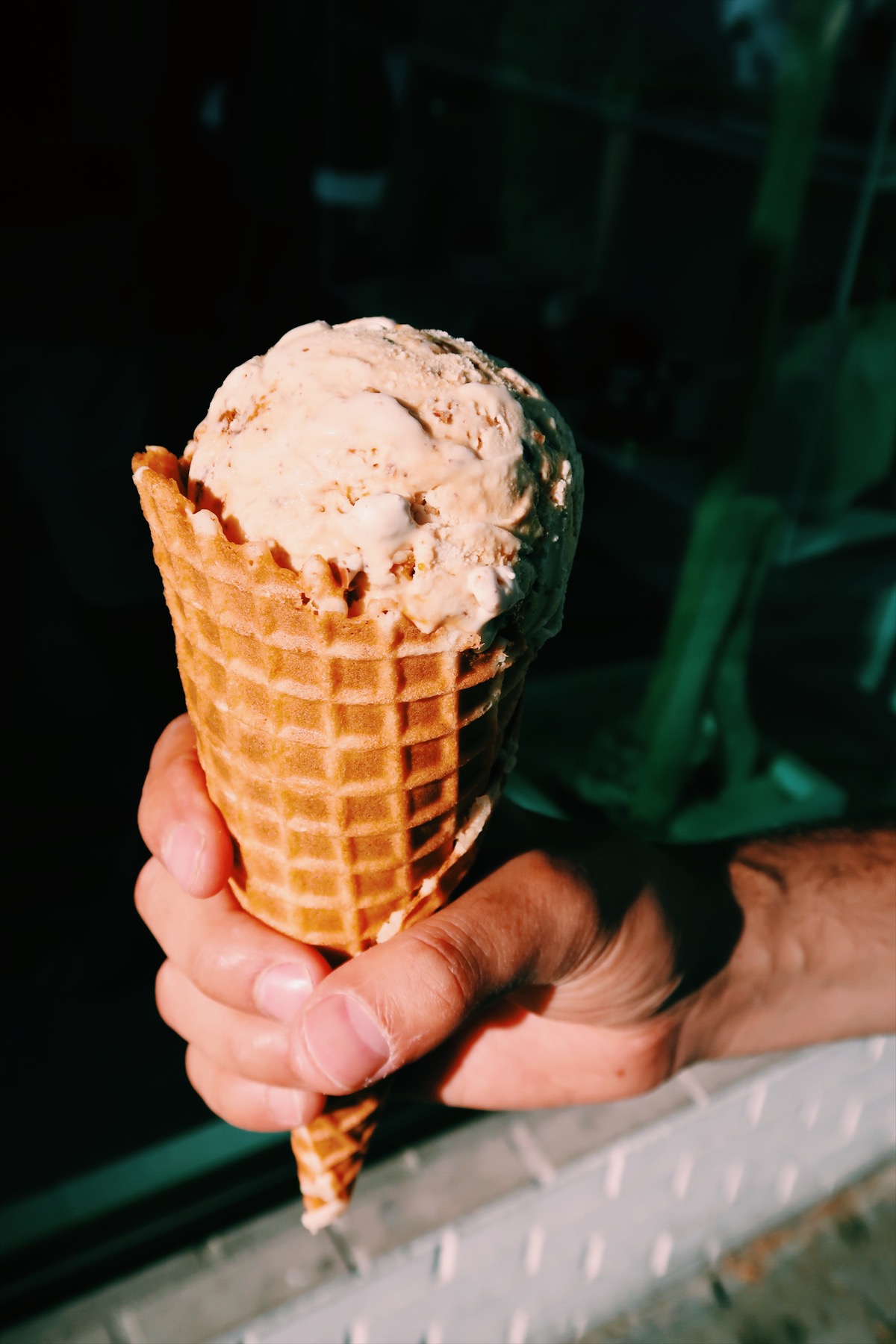 What They Say: Salt & Straw is a weird and wonderful ice cream company based in Portland, Oregon. They now have 2 locations in Los Angeles and are loved by locals for their fresh, artisan ice creams. You can get favourite flavours such as black olive and goat cheese in cone form, as pints to-go, sundaes and milkshakes. Salt & Straw founder Kim Malek brought in Andee Hess from Portland to design the shop on Abbot Kinney, which pays tribute to the neighbourhood’s artsy vibe glass art and a beautiful mural.

What We Say: Simply the best ice cream in LA – no doubt about it. There’s some seriously wacky flavours here, and we love it. My personal favourites are to keep it nice and simple; I love their classic flavours, like sea salt with caramel ribbons and salted, malted chocolate chip cooke. If you’re feeling daring, try one of the student inventor series (ice creams devised by kids!) – expect everything from maple peanut butter brioche French toast ice cream to rainbow unicorn galaxy swirl. Genius.

Where: In LA, 1357 Abbot Kinney Blvd, Venice, CA 90291 and locations throughout California. 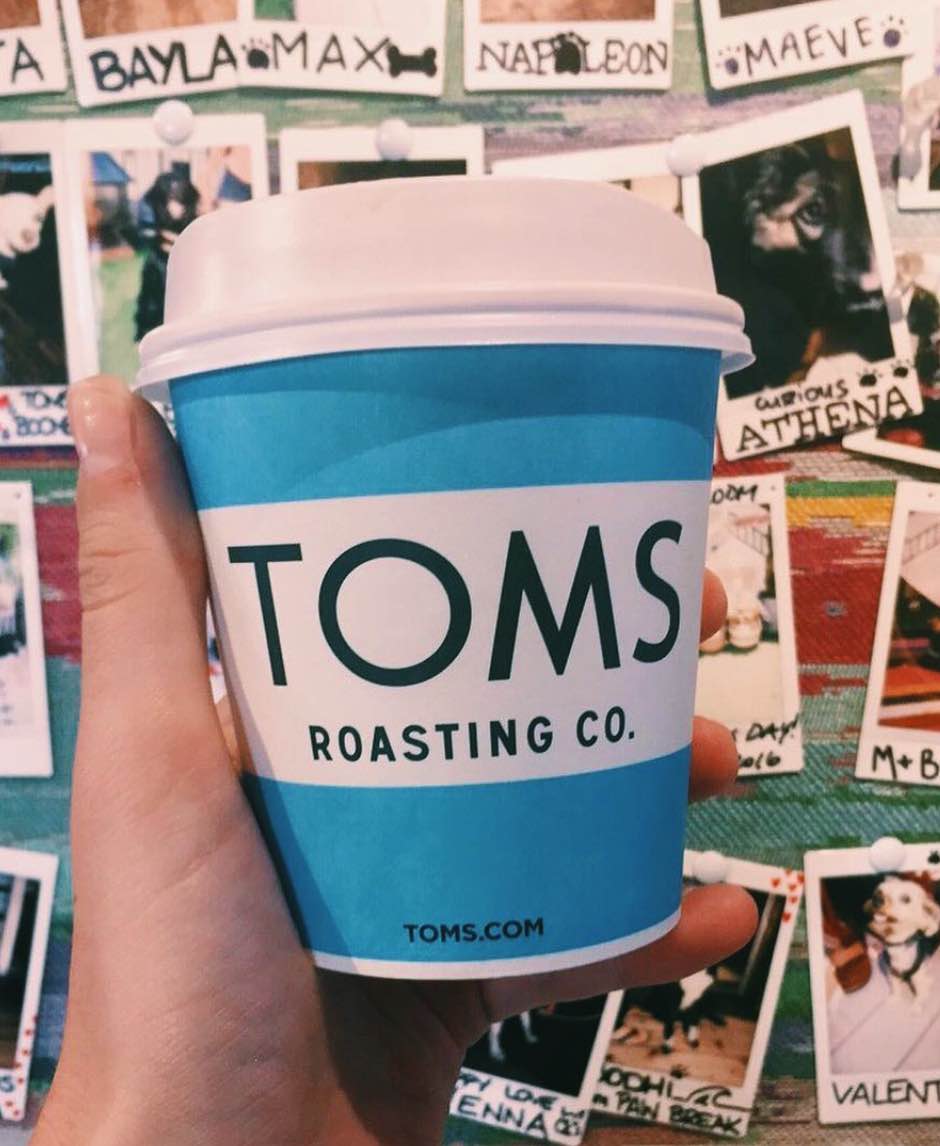 What They Say: In 2006, Blake Mycoskie and five interns started TOMS in a small apartment in Venice Beach, California, with one goal in mind: to give shoes to children in need. That goal has since grown into a global movement, and now they’re proud to announce that the movement has three new places to call home: Portland, Chicago and New York. There’s also their store in Austin, Texas and the flagship store on Abbot Kinney Boulevard in Venice (which we love).

What We Say: One of the finest iced lattes in LA (they serve oat milk) in a super cool setting on Abbot Kinney. If you’re looking for a spot to work in the sunshine, this is the place for you – there’s an outside seating area with lots of space, and outside tables. It’s a great spot for people-watching, but be warned, you’ll probably leave having bought a pair of shoes! 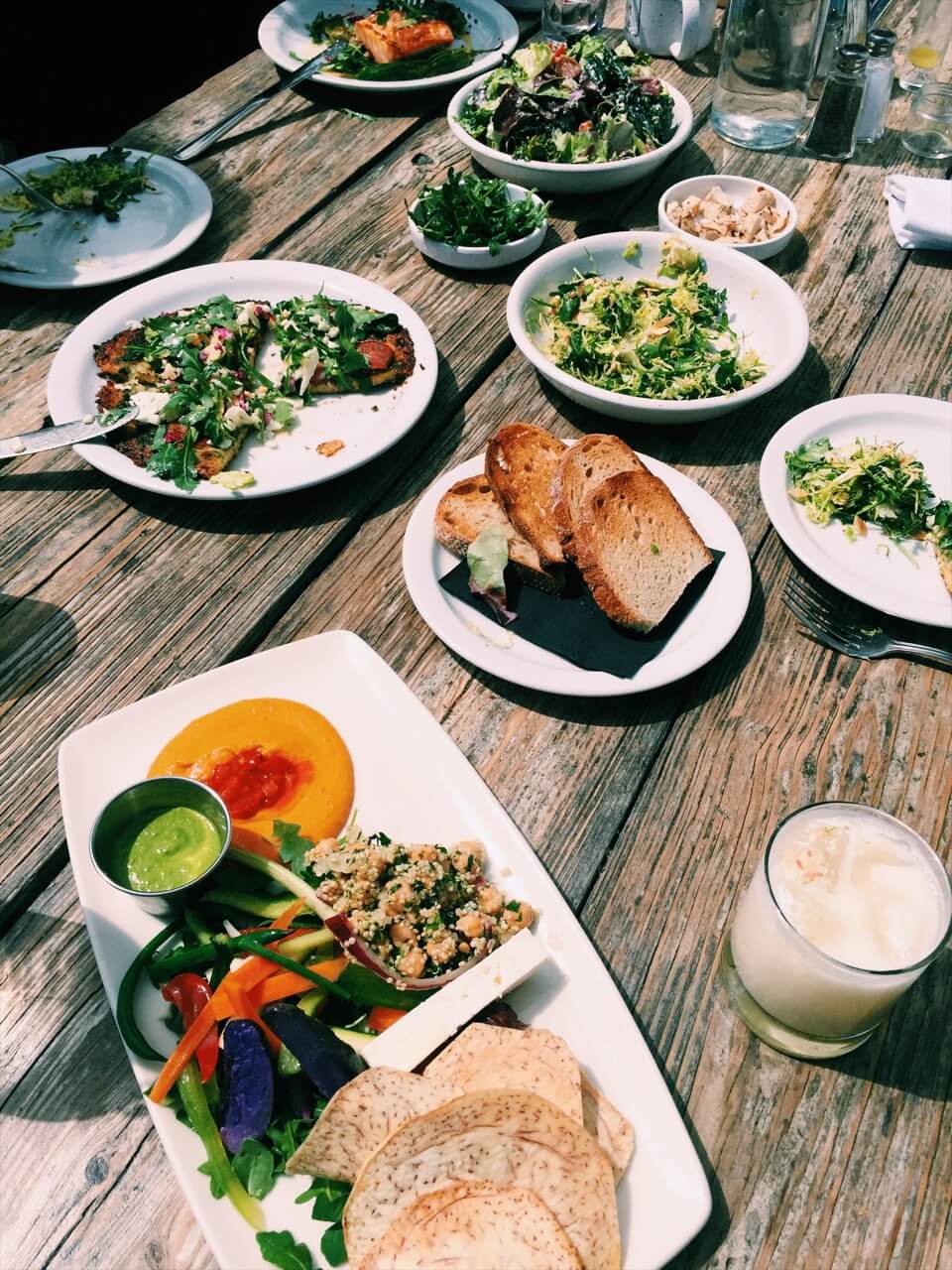 What They Say: The Malibu Farm Restaurant is located at the front of the pier in Malibu. It is a full service restaurant and has a full bar with speciality cocktails, wine and beer, espresso coffee drinks, smoothies and juices, plus patio and dining room seating. Malibu Farm is a locally owned small business – their food is super simply prepared with no secret ingredients. They use mostly whole wheat flours and whole grains with lots of veggies and fruits. Fresh, healthy and seasonal, this is the ultimate California dining experience.

What We Say: Really delicious, seasonal food in a beautiful pier-side setting. We loved watching the ocean as we tucked into our food and cocktails – it’s such a relaxing place to be. We started with the red pepper hummus with seasonal veggies, bread sticks and green goddess dip and the cauliflower pizza with mozzarella and pesto, which were great. For mains, we enjoyed a kale caesar salad and a tasty brussel sprout salad with mustard lemon dressing. A must-visit in Malibu! 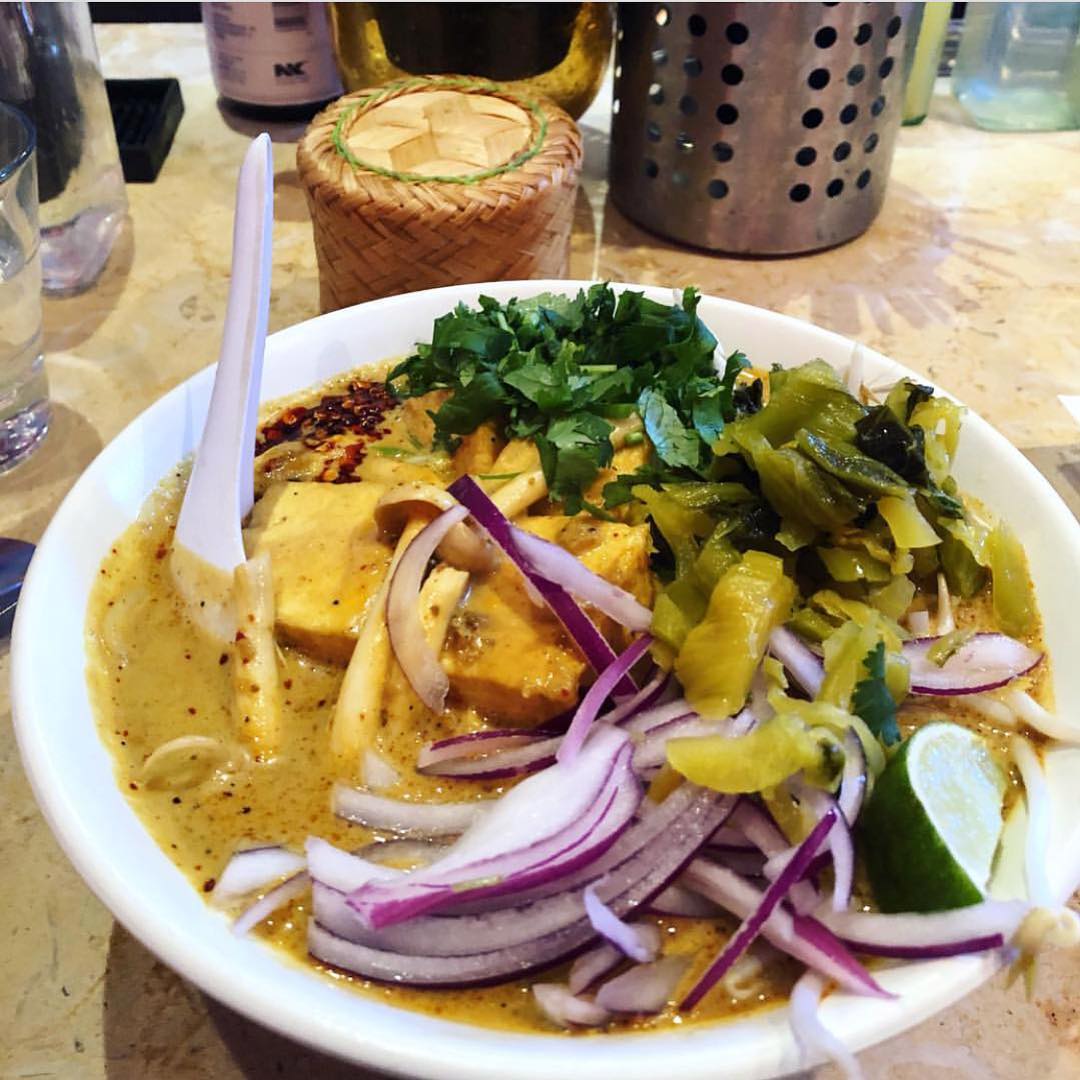 What They Say: Kris Yenbamroong is the 33 year-old chef and owner of NIGHT + MARKET restaurants. Born and raised in Los Angeles, Chef Kris has no formal culinary training, but grew up in his family-owned restaurant, Talesai. He attended New York University and graduated with a degree in film. If NIGHT + MARKET restaurants were to have a mission statement, it would be to make the most delicious and authentic Thai food to facilitate drinking and fun-having amongst friends. Right on.

What We Say: NIGHT + MARKET is often landed in the “best” lists of LA, and it’s not hard to see why. We enjoyed some of the best Thai food we’ve ever had, in LA and beyond. It’s just so fresh and delicious; we tucked into one of the best Thai curries of our lives, with the sensational sweet potato Massaman curry. Expect a divine curry of sweet potato and yam, in a hearty curry broth with toasted coconut, served alongside sweet and sticky coconut rice. The kind of place you want to come back to, again and again.

Where: Locations throughout LA – see here. 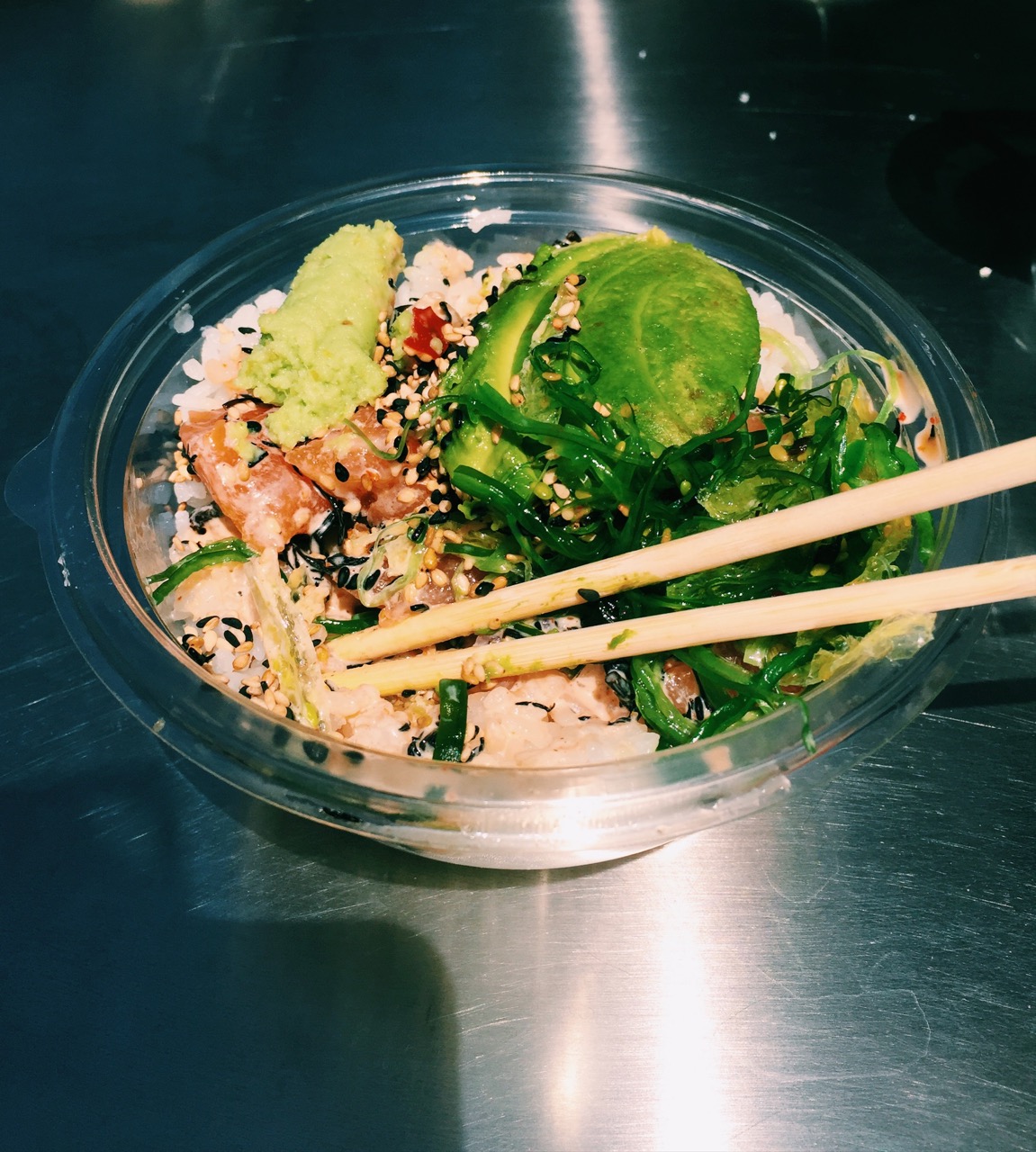 What They Say: Wife and husband team Brooke Williamson and Nick Roberts, embrace their affinity for casual Hawaiian cuisine with the debut of their fourth restaurant, Da Kikokiko. This fast-casual concept that joins their quickly expanding hospitality group, Company for Dinner (Hudson House, The Tripel, Playa Provisions, and the culinary boutique Tripli-Kit). Offering modern takes on Hawaiian poke and musubi with help from California’s farmers’ markets, Da Kikokiko provides a contemporary oasis for fresh, innovative seafood near the beach.

What We Say: Oh my days, the poke is so good here. Seriously, the best poke we’ve had in Los Angeles without a doubt. We loved their build-your-own concept, with some seriously good toppings and delicious fresh fish. We opted for the Lomi-Lomi salmon with spicy mayo, edamame, avocado and Chuka seaweed salad on a bed of white rice, and it was honestly divine. We can’t recommend this poke spot in Playa Vista enough!

What to Eat in Los Angeles: Ultimate Guide 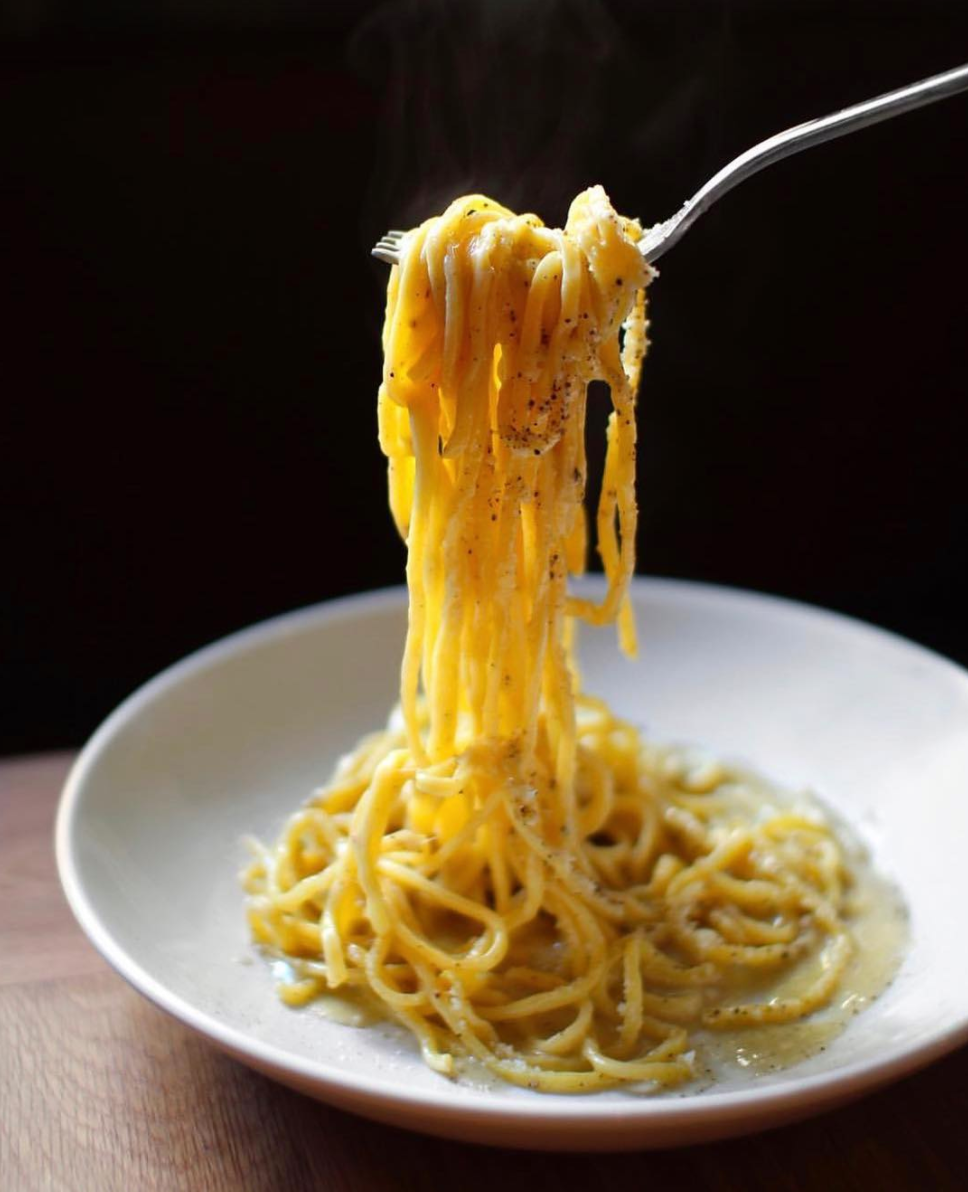 What They Say: Uovo dedicates themselves to serving iconic pasta dishes like Carbonara, Cacio e Pepe, Bolognese and Amatriciana. With half of their founding team born and raised in Italy, they discovered the restaurants and the chefs that make the best versions of these iconic dishes. Their journey to find the best pasta in Italy took them to Bologna – the epicentre of fresh pasta. They tried but could not make that pasta here, so realised they needed to make the pasta there and overnight it to LA, so they built a kitchen and hired a team of experts in Bologna.They have made every effort to remain true to the heritage of Italian cooking; their recipes are based, inspired or directly sourced from the very best restaurants in Italy.

What We Say: Some of the best pasta we had in LA, no doubt about it. Their pasta is made fresh and is so very delicious; we loved the Cacio e Pepe for a cheese feast, and the ravioli with ricotta filling and a fantastic homemade tomato sauce. The kind of food you want to taste again and again, if you’re looking for authentic Italian food in LA, this is the place to come.

9. For Deli Lunch: Joan’s on Third 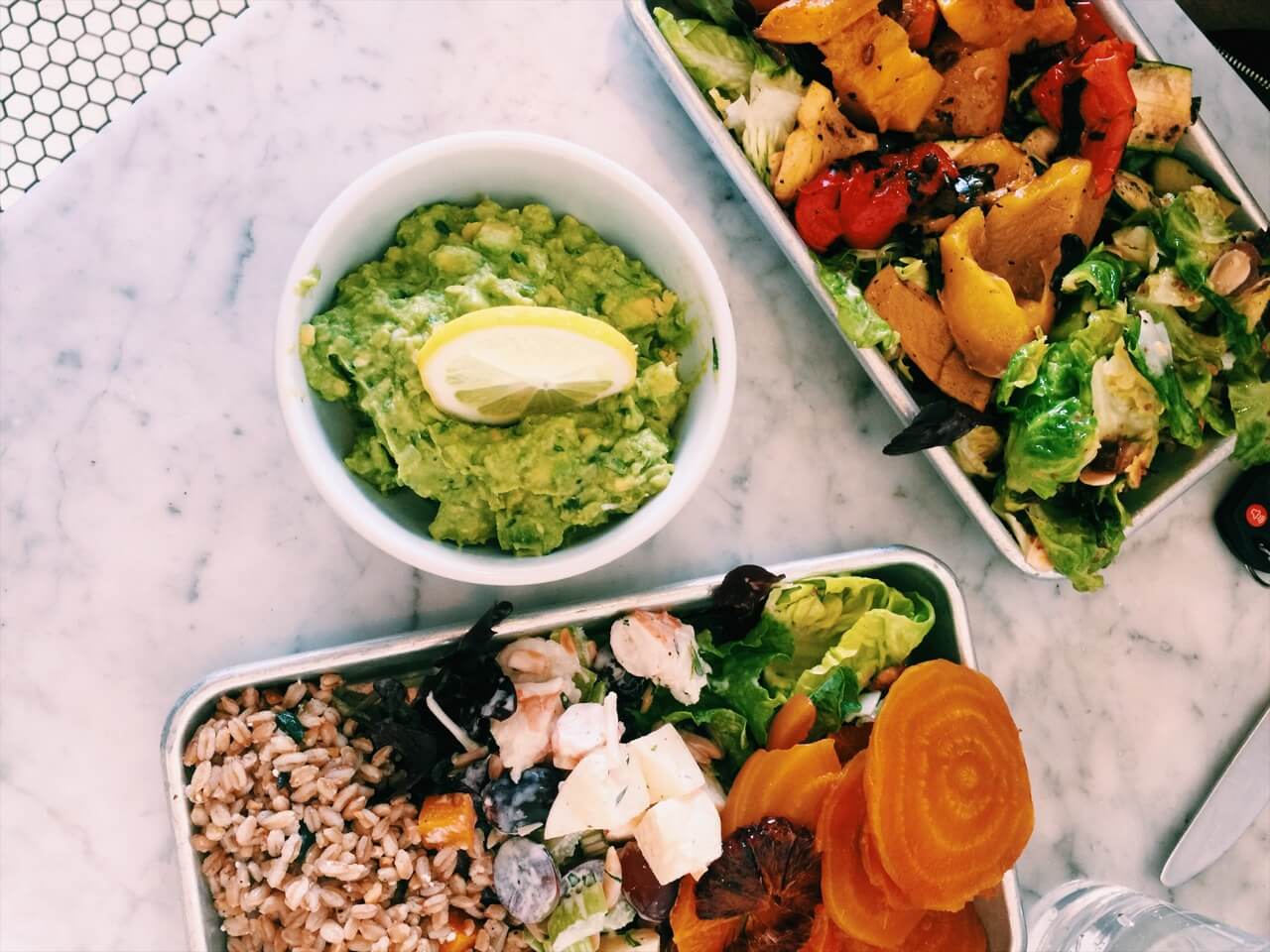 What They Say: Entrepreneur, tastemaker, chef, founder, and curator of all things Joan’s on Third, Joan McNamara created an L.A. foodie institution. The daughter of Czech immigrants, Joan began her career working for industrial designer Paul McCobb in Manhattan and famed chef Dione Lucas. After launching her cooking school, she and Lucas opened The Egg Basket on 59th Street near Bloomingdale’s, which Joan eventually bought and ran herself. After moving to Los Angeles to raise her two daughters, Carol and Susie, Joan’s passion for cooking reemerged at the heart of her home. She opened Joan’s on Third in 1995 with her daughters, quickly becoming one of LA’s most in-demand caterers and effectively putting Third Street on the map while helping define the city’s food culture. Today, on Third Street and in Studio City, her devoted followers pack into the restaurants and marketplace – a vibrant gathering place, Joan’s on Third has evolved into a culinary emporium and destination. A must-visit in LA!

What We Say: A great place to visit in West Hollywood for the best deli food around, as well as great people watching. We loved the salad bar with a great range of freshly-made salads; try the shrimp Waldorf salad, farro salad with butternut squash and feta, beetroot citrus salad and the divine roasted butternut squash. Wash it all down with some of Joan’s great iced lattes and a slice of homemade cake. Dreamy. 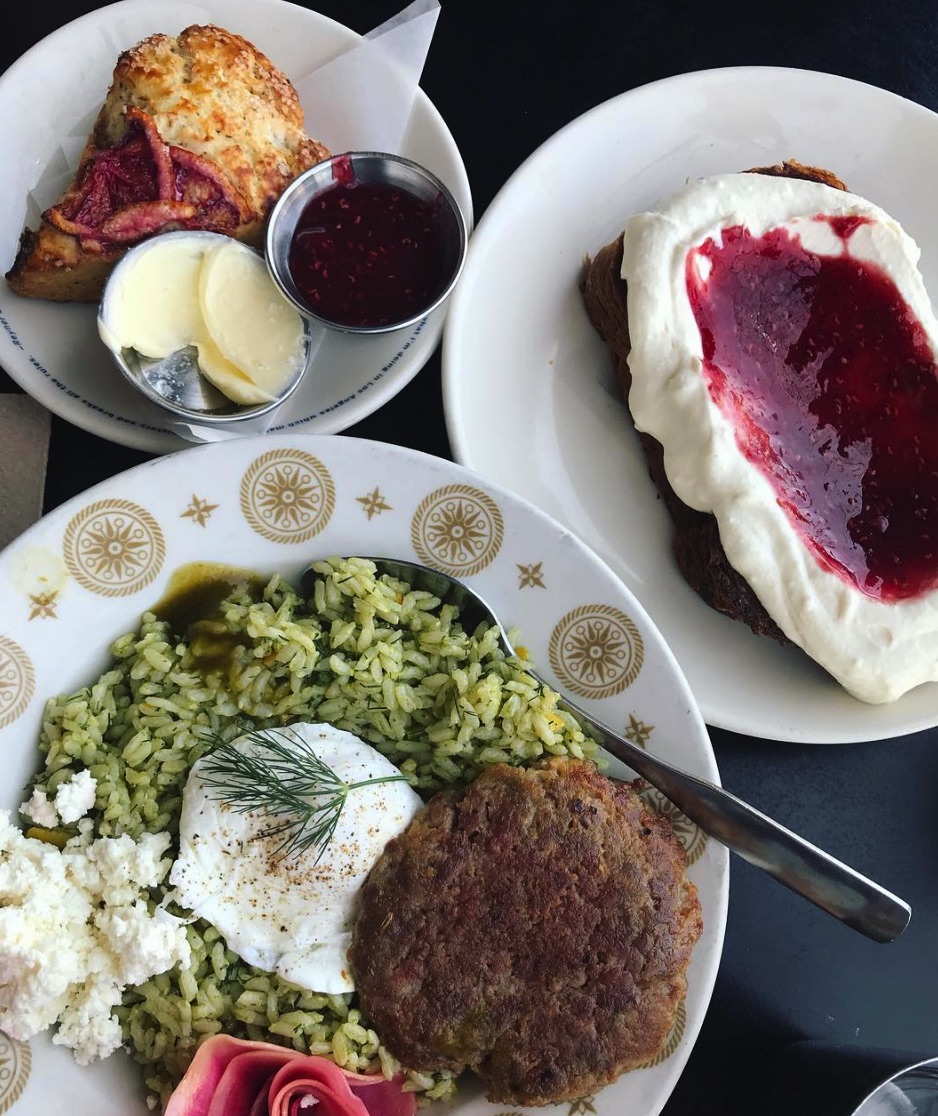 What They Say: A hip cafe featuring global-inspired breakfast and lunch fare, with house-made jams in a minimalist space. Sqirl LA is a veritable institution in LA; a breakfast all-day spot in Silverlake, it’s not easy to get in here for brunch, but it’s worth the wait. It’s all about the produce here – Squirl focuses on seasonal, fresh ingredients, creating some wonderfully creative breakfast dishes.

What We Say: The food is pretty wacky at Squirl, but we can’t help but love it. If you’re in the mood for creative breakfast food, this is the place to visit. Our personal favourites were brown rice porridge with toasted hazelnut and house-made jam, and the avocado toast with hot pickled carrots and wood sorrel. For sweet treats, try their French toast with jam and creme fraiche, it’s out of this world.